Jer
7 years
Congrats on 600 posts on what is perhaps one of the best, if not the best, FM15 story the site has graced. Well done Glenneth.
1
Login to Quote

Welshy
7 years
Brilliant story and congratulations on 600!
1
Login to Quote FIFA announced the results of the annual Ballon d'Or tonight and Liverpool were well-represented by James Ward-Prowse and Mario Balotelli.

It was Lionel Messi who scooped the prestigious award once again, taking his tally of Ballon d'Or wins to 8. His first came when he was 22 years old, and now at the age of 34, the Barcelona captain is still very much the best player in the world after scoring 36 goals in 46 games last year.

Messi was the clear winner after collecting 411 voting points in total, and takes over from Real Madrid winger Gareth Bale, who won the award last year.

Trailing behind the living legend is Ward-Prowse and Balotelli, with 236 points and 140 points respectively after their spectacular year.

Ward-Prowse had a splendid year, lifting no less than six trophies as Liverpool captain in 2021 including the Champions League and Premier League titles. The Reds' midfield enforcer was a mainstay in the starting eleven and made 54 appearances, scoring 14 goals.

Meanwhile, Balotelli recovered from an injury-plagued start to the 2020/21 season to finish as Liverpool's top scorer for that same season with 28 goals. Last year, the much-celebrated Italian scored on 33 occasions in 41 games.

"I'm delighted to be here again," said Ward-Prowse, who was nominated as second runner-up behind Messi and Cristiano Ronaldo just two years ago.

"To be named one of the best players in the world not once but twice is a great honor. And to be mentioned in the same breath as Messi, whom I've admired since I started my career, feels great. Hopefully following this I can push on and keep improving as a footballer."

He also extended his congratulations to teammate and fellow runner-up Balotelli. "Mario has been one of the best players in modern football for a while now and it's great to see that he's still being recognized for his achievements.

"A lot of people are saying that he's not as skilled as before, or that he doesn't have as much footballing ability compared to a few years back, but I think the fact that he is here today proves all his doubters wrong." 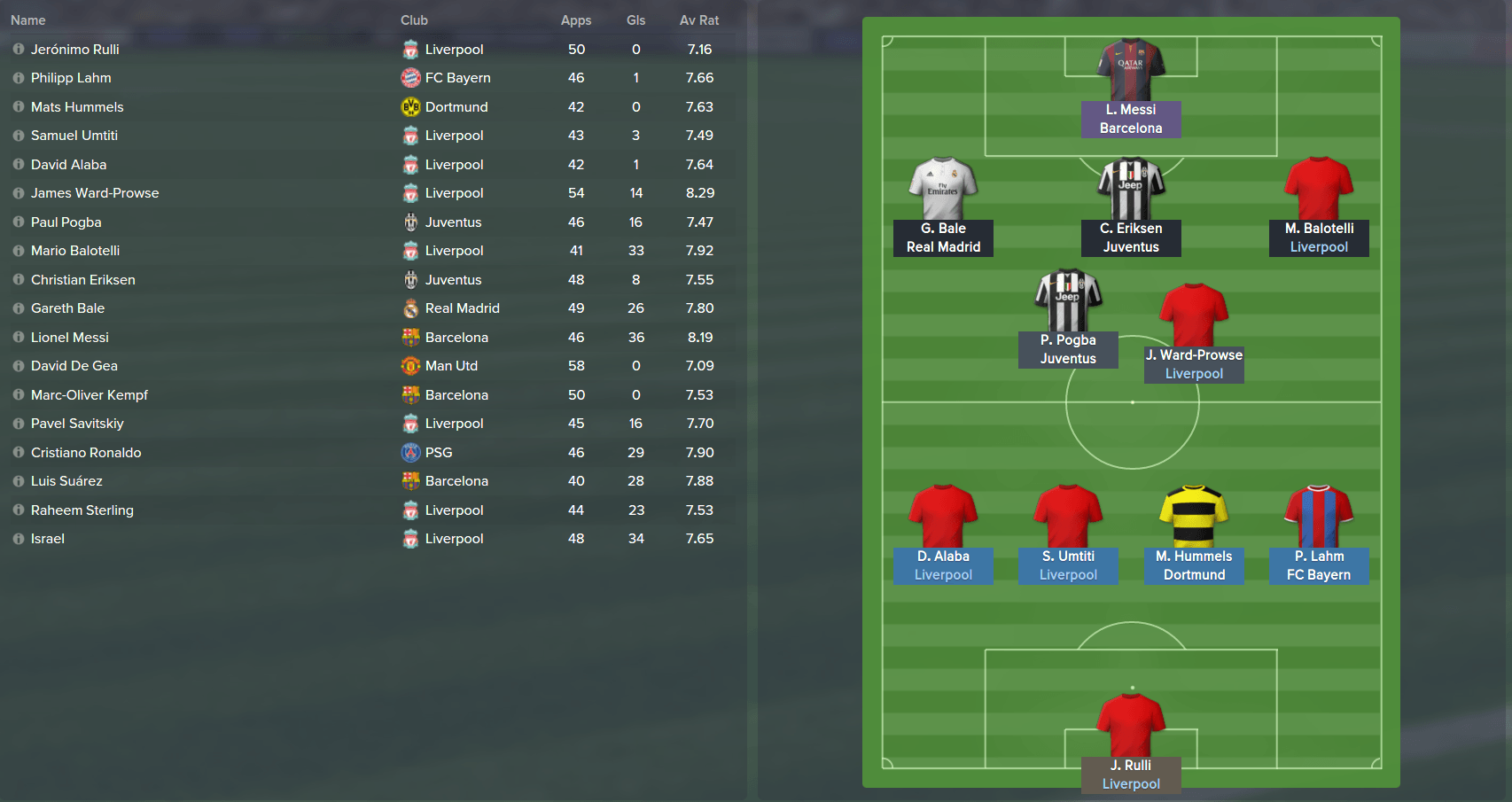 The FIFA World XI was also packed with Liverpool players, and five members of Brendan Rodgers' title-winning squad made up the best starting eleven of 2021.

In goal, the World XI had Jeronimo Rulli, who won the Golden Glove for a third season running in May, while Samuel Umtiti and David Alaba is selected to make up half of the defense. Ward-Prowse naturally slots into the center of the pitch, and Balotelli is placed on the right wing.

That is not all, as there is still Pavel Savitskiy, Raheem Sterling, and Israel, who have been named on the bench after failing to make the grade for the XI. World awards aside, Israel also collected a personal honor for himself after being named this year's European Golden Boy.

The 20-year-old linked up with Liverpool exactly a year ago for £35 million, and has quickly made a name for himself in England scoring 34 goals in 48 appearances.

Despite being pushed out onto the wing numerous times to accommodate Richairo Zivkovic, Israel has shown that he is incredibly lethal in his preferred striking role and his latest accolade will certainly continue to give Rodgers food for thought.

Liverpool's number 9 is in the form of his life at the moment with 22 goals to his name this season, but Israel himself has scored 18 and is not far behind.
Login to Quote

Jer
7 years
Dang, Israel is a total monster in attack. Nice to see LFC well represented in the World XI and Balon D'Or.
Login to Quote

Dang, Israel is a total monster in attack. Nice to see LFC well represented in the World XI and Balon D'Or.

It's extremely flattering to know someone thinks so highly of this! Thanks Jeremy! Yes, Israel packs a lot of firepower, but I guess that's what £35 million gets you. Still waiting on that Ballon d'Or win from a Liverpool player though, so tempted to just buy Messi at this point

(Barcelona will let him leave for 5 million according to my scouts!)

Thanks, it's been an amazing ride!
Login to Quote 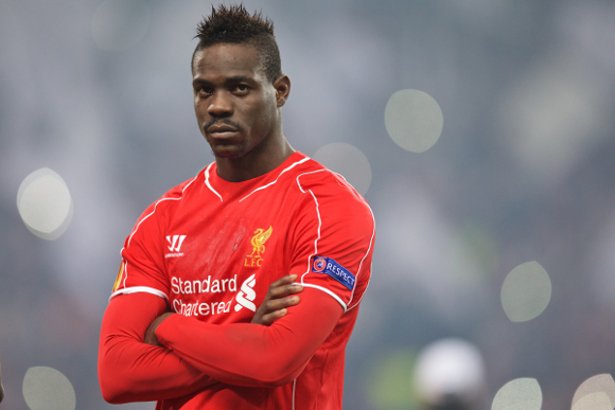 To celebrate placing third in the FIFA Ballon d'Or and the arrival of the new year, Liverpool's very own Mario Balotelli will be conducting a live Q&A on LFCTV. Send your questions to the club's official Twitter account @LFC with the hashtag #AskMario.

Balotelli has made over 200 appearances in the Premier League for the Reds since his arrival at the club in 2014. Starting out as a forward, the Italian has gradually shifted into a winger under Brendan Rodgers, powering the team to a multitude of trophies and winning the hearts of every Liverpool fan.

Q: Can you count how many trophies you've won with Liverpool?

Q: What is the best part, and worst part, about playing for Liverpool?

The best part about playing for Liverpool has to be how amazing the fans are. Ever since I've stepped into Liverpool the fans have been fantastic and I feel that they are the best fans in the entire world. Worst part... that's a tough question. I don't think there's any.

Q: What are the possibilities of you making a return to play football in Italy and Serie A?

I don't know about that. I can't see myself playing anywhere else as of now, but football takes you to many places and Italy may be one of them.

Q: Your contract with Liverpool runs out next year, are there talks so far about an extension? I would hate for you to leave!

There has been a bit of discussion but for now we want to focus on the season. Contract issues can be very distracting so maybe we will wait until the end of the season before sorting it out.

Q: What are some of your goals for the future regarding football?

There's a lot of competition in this squad. I want to keep playing well and continue challenging for first team places.

This is easy, has to be when I scored five in the Champions League Final last season against PSG. That was a magical game for me and I would like to think it's my best performance as a Liverpool player considering the importance of that match.

Q: Looking back on your career, do you feel that there are any things you could have done differently?

No. Everything that happened has made me who I am today and I am very thankful for that.

Q: You've placed second some years back and this time you're third, do you think you will ever win the Ballon d'Or?

It's very unfair for footballers like myself, who play in the same era as guys like Lionel Messi and Cristiano Ronaldo. At the age of 34, 35, they are still the best in the world and I think that speaks volumes. Anyway, about the Ballon d'Or, it's going to be very hard, but we shall see. Nothing is impossible.

Q: What do you think about Ward-Prowse coming in second?

James is a great leader and captain but he is definitely not better than me! Hahahahaha. In all seriousness I feel that he is the best midfielder in Europe currently so his ranking for the Ballon d'Or was very well-deserved.

Q: As a player in the club, can you describe Liverpool's aims for this season and beyond?

To win everything. Everything that can be won, we want to win it.
Login to Quote

Jer
7 years
Get Messi in

mo_123
7 years
No ones better the Balotelli,

Paying his wages would be a problem honestly 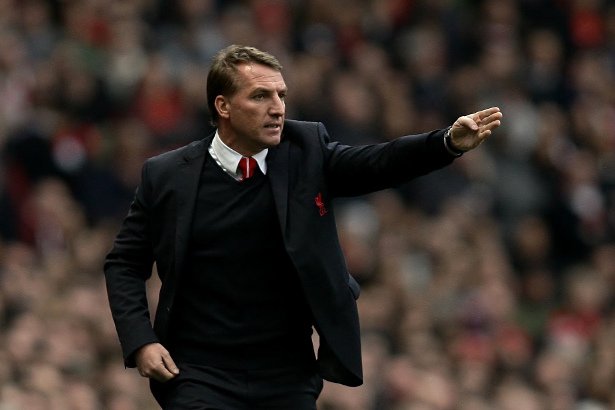 Exactly a year after rejoining Liverpool from Real Madrid, central midfielder Gustavo Cuello is on the move again after agreeing a four-year contract with Russian Premier League side CSKA Moscow.

The 24-year-old leaves for £16 million after making just 36 league appearances in total for Liverpool. Only 9 of those games came in his second spell at the club.

Cuello was first brought to England in 2018 from ADO Den Haag, but limited first team opportunities resulted in the youngster demanding to depart for Real. Unfortunately, he flopped in the Spanish capital, playing just 2 games in the Copa del Rey before returning to Anfield on a free transfer six months later.

But once again, chances were hard to come by and this time it is Liverpool manager Brendan Rodgers himself who has made the decision to sell Cuello.

The deal represents an impressive profit for the Premier League holders, who have made £31 million in total on the Argentine after initially purchasing him from Den Haag for £9.75 million.

"Gustavo's career has stalled for awhile now and that is evident for all to see," said Rodgers, on liverpoolfc.com. "Hopefully he can get it back on track at his new club, where I'm sure he will have plenty of playing time and opportunities to improve his game."

Skinner, who also plays in the center of the pitch, is the Bees' latest record signing after Liverpool agreed to part with the academy-developed midfielder for £15 million.

Brentford fans will have every right to be delighted with their new signing, who agreed to sign for the club ahead of prestigious suitors like Arsenal. Brentford manager and former Liverpool captain Sami Hyypia, who masterminded the team's rise from the Championship to 7th place in the Premier League last season, is understood to have played a big part in securing Skinner's signature.

Skinner, despite being tipped for future glory by coaches at Liverpool, has appeared in just 7 Premier League games this season, consequently losing his place in the national team after earning his first cap just half a year ago.

"Staying at Liverpool was always the plan. I support Liverpool, my family supports Liverpool, and I love playing for Liverpool. It's a pity but sometimes things don't work out the way you want them to," said the 23-year-old, at his unveiling.

"Brentford are a club with ambition and I'm very excited to be here. I can't wait to play, to show the fans what I can do."

Meanwhile, Liverpool's midfield exodus has netted them slightly over £30 million, but Rodgers is unlikely to make further changes to a squad that has not lost a single game since the start of the season.
Login to Quote

Jer
7 years
I feel so bad for Cuello.. Shame Skinner didn't make it at LFC.. Do you have a local Scouser?
1
Login to Quote

Skinner was the only one

Jer
7 years
y u sell him
1
Login to Quote

kingpin_blue
7 years
Cuello is dissapointing. I signed him once for Wolves. did not even come close to be good.
Login to Quote