http://i4.mirror.co.uk/incoming/article4905706.ece/alternates/s615/Harry-Kane-celebrates-scoring-their-first-goal.jpg
Harry Kane Has continued to impress as Spurs got through January unbeaten.

http://i1213.photobucket.com/albums/cc463/SFC2010/4059_zps2a0853ae.png
Much better this month, as we made it through unbeaten - morale is running high, but there's still a long way to go if we're going to get into Europe and keep the board happy. It's a high-pressure environment now, but that's not always a bad thing.
Login to Quote

http://www.tottenhamjournal.co.uk/polopoly_fs/1.3747320.1409175267!/image/image.jpg_gen/derivatives/landscape_630/image.jpg
Hugo Lloris’ form has been called into question this month as his side seemed to Spiral out of control 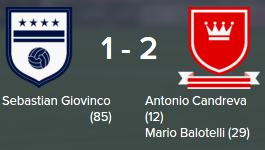 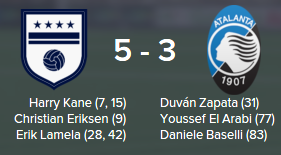 Ukranian Winger Konoplyanka was the star of the show this month, causing constant problems to opposition defences. 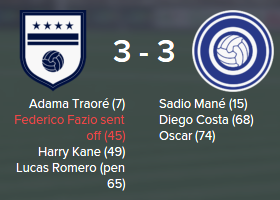 Arvind
6 years
Where does that leave you on the table right now?
Login to Quote

Harry Kane's form has been nothing short of brilliant this season, as Spurs pushed the fight for fourth place right to the wire.

As May rolled around, only 3 games stood between Tottenham and a spot in the Champions League next season. With Manchester City just one point behind, the team were more than aware that anything less than maximum points would ensure they finished fifth.

But Spurs had other ideas. First to visit, were West Ham, who had previously dished out a vicious 5-2 beating back in December.

Early on, it was West Ham who had the best of the action, pressing forward and putting pressure on the Tottenham back line. The young pairing of Doria and Eder Alvarez Balanta held strong though, and with Lucas Romero dropping deep, Spurs held on until half-time, where the plan was to re-group.

Mauro Zarate, so often a pain in Tottenham's side, scored 3 minutes after the restart; catching the Spurs defence napping with a sharp run on to a speculative long ball before rounding Hugo Lloris and scoring into the now empty net.
http://i.telegraph.co.uk/multimedia/archive/03154/Hugo_Lloris_3154060k.jpg
Despite some excellent Displays, Lloris has shown himself to be prone to costly errors over the course of the season.

Spurs fans groaned, as their hot-and-cold French goalkeeper picked himself off the ground; another goalkeeping error...they were becoming more and more costly by the minute.

They soon had something to cheer about though, as Adama Traore, playing on the right wing, came bursting down the flank, and cut inside the West Ham defence to bury his shot in the back of the net. 1-1, and things were looking better.

Mauro Zarate, though, was determined not to see his side lose, and was on the scoresheet again just 3 minutes later - a powerful long-range effort which caught Lloris napping, and West Ham were ahead again.

For 20 minutes, Tottenham had to withstand a torrent of West Ham attacks, and their own were feeble counter-attacking attempts that rarely made it past the half-way line. The passing from midfield was woeful, and Spurs really had concerns about the result.

Adama Traore to the rescue. Two goals in the last 15 minutes of the game rescued his side, and ensured that Lloris' bad day at the office didn't affect matters too much.
Position After one game: 4th (62PTS)

Next on Spurs' list were Swansea, who, again, Spurs had not beaten this season, and for this game, Hugo Lloris found himself on the bench. When asked about the decision to drop his first-choice goalkeeper in the penultimate game of the season, Pochettino was candid in his answer. "Frankly, and i'm sure the supporters agree, Hugo hasn't been at his best recently. Jeronimo [Rulli] has been sharp in training, and as a manager, my job is to choose the players who give us the best chance of winning. Right now, Hugo isn't in that selection." 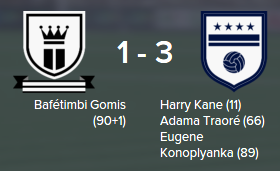 A performance so far removed from the game against West Ham, fans could be forgiven for thinking they were watching a different team. Martin Odegaard partnered Lucas Romero in midfield, and the duo, although young, made light work of Swansea.

Harry Kane opened the scoring after just 11 minutes, latching on to a lofted pass from Odegaard to slot home calmly, and keep Spurs moving towards European football. The rest of the first half was uneventful, but Tottenham never looked threatened by the Swansea attack, and as half-time rolled around, Spurs were the dominant side. 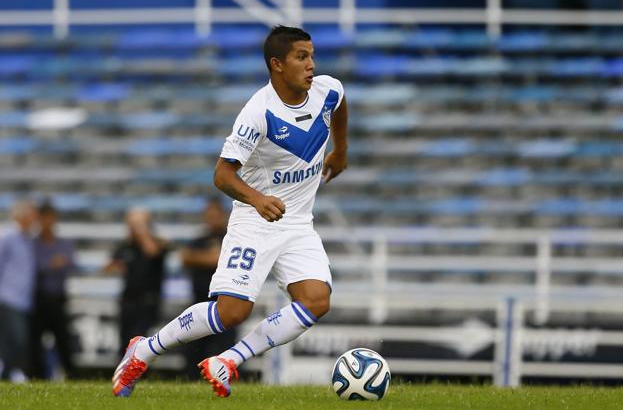 Lucas Romero continued to impress against Swansea, cementing his reputation as one of the world's best young midfielders.

After the break, Swansea were a completely different team. Flying into challenges with a passion which was lacking in the first half, and pouring forward with every attack. Rulli, who had nothing to do in the first half, was called into action regularly, and was equal to the challenge. One particularly rasping shot from Gomis forced the Argentinian stopper into an athletic one-handed save which drew applause from the entire stadium.

Adama Traore doubled Spurs' lead after 66 minutes, and the tide turned once again. Deflated by the goal, Swansea looked in danger of collapsing, as Spurs turned on the style. Their passing was slick, and they looked good. Konoplyanka sealed the win after 89 minutes with a long-range effort which found its way to the top corner, and the Spurs fans went wild.

Even Gomis' stoppage time consolation couldn't stop the celebrations in the away end, as Tottenham kept a point between them and Man City, retaining 4th place.
Position After Two Games: 4th (65PTS)

In the final game of the season, Tottenham travelled to Norwich, knowing only a win would be good enough to secure European Football. Man City were in action at Nottingham Forest, so any slip would be enough for Tottenham to drop out of fourth place.

Another excellent performance from Tottenham, and as straight-forward a win as they've seen this season. Jonny Howson's early goal looked like it might have thrown a spanner in the works, as news filtered through that Manchester City were a goal to the good against Forest, but Eugene Konoplyanka and Harry Kane were once again unstoppable in front of goal, with Hojberg and Emre Can pulling all the strings from midfield.
http://assets.lfcimages.com/uploads/page%20thumbnails/3793__3309__emre1000.jpg
Despite only making 10 appearances at Liverpool, Emre Can has become a firm fan favourite at White Hart Lane, and a twitter campaign under the hashtag #KeepEmre has been launched by Spurs fans who want to see him make his loan move Permanent.
A 3 goal salvo from Kane and Konoplyanka saw Spurs into a comfortable 3-1 lead, and from then on out it was plain sailing.

Very nice work on getting to Europe, you'll rake in the moolah now
Login to Quote St Jakobspark in Basel is the venue for the 2016 Europa League final, as Tottenham meet Monaco in what is sure to be a tightly contested match.

As the domestic season rolls to a close, Tottenham and Monaco meet in Basel to contest the final of this season's Europa League. With Tottenham wrapping up their season with 3 straight victories, and Monaco coming into this match on the back of 4-0 and 3-0 victories, both sets of fans will be optimistic about their sides chances.

From kick-off, Tottenham were the dominant side, piling forwards and putting heavy pressure on the Monaco back line. Eder Alvarez Balanta beat Ocampos to a long goal kick, and as Spurs surged forwards, Konoplyanka fired off a shot from the edge of the box, which was acrobatically tipped round the post for a corner.

Lucas Romero's first corner didn't make it past the first man, but the second found its way into the box, where Jan Vertonghen rose highest, causing havoc in the Monaco defence. His cushioned header found Jese lurking on the edge of the box, and the Spaniard made no mistake, slotting home through the tanngle of legs to put Spurs ahead.

The lead didn't last long though. A goalkeeping error from Jeronimo Rulli let El Shaarawy in to slot home and bring Monaco level. After that, Tottenham were the dominant side, pouring forward at every opportunity and testing the Monaco defence one multiple occasions. However, the French side held strong and at half-time, the score was 1-1

Half Time: Tottenham Hotspur 1-1 AS Monaco


As soon as the second half started, Monaco seized the upper hand; a slick passing move resulted in Iker Munian losing his marker in the box, and he powered home from close range to put Monaco ahead.

Tottenham were a resurgent force, continuing to press the Monaco defence, but the attackers were wasteful. Shots were off target, and Subasic was in supreme form. Spurs looked like they would be in with a shout, until disaster struck.

DeAndre Yedlin, otherwise impressive, got caught off-guard by a driven ball in to the Tottenham 6 yard box, and a wicked deflection off his shin diverted the ball past Rulli, to give Monaco a two-goal cushion.

Tottenham still looked in good form though, attacking relentlessly, but between the wastefulness of their attack, and Subasic's apparently inhuman agility, there was no way through. When Dybala was pulled down on the edge of the box after 75 minutes, Konoplyanka stepped up, and with supreme confidence, he lifted the ball over the wall, and into the back of the Monaco goal.

But they were an uneventful 15 minutes, as Monaco made 3 substitutions, and Jan Vertonghen limped off injured, after a reckless tackle from Laporte. The final whistle blew, and, despite a gutsy performance, Tottenham were nothing more than valiant runners-up.

Feliks
6 years
Aaah unlucky, but A$ Monaco are a good side at least so it wasn't too disappointing. On a slightly warmer note, dem graphics tho
Login to Quote

Tallery
6 years
Really unlucky, hard to take I guess considering you got so far
Login to Quote

Justice
6 years
Unlucky to lose in the final but you can build on this now for next season!
Login to Quote

Lamela: I Can't Be The Nearly Man

As the 2015/16 season draws to a close, fans are casting their focus to the transfer window, and Spurs fans are sure to be concerned that their Argentinian winger Erik Lamela wants out. Shortlisted for the Balon D'or in 2015, Lamela clearly feels that Tottenham are not up to the task of matching his lofty ambitions.

"I need to be playing at the very highest level, and it saddens me to say that I don't believe Tottenham can give me that at this stage of my career. I mean no disrespect when I say this, and I want the fans to know that they and this club mean the world to me. But if a bid was to materialise from a Champions League side, It would be a difficult decision for me to make.

Since his £27.5m move from Roma, Lamela has made 48 league appearances for Spurs, scoring 15 goals for his side, playing an integral part of Pochettino's tactical system, and cementing a spot as a firm fan favourite.

Fan reaction to Lamela's statement hasn't been positive, with supporters taking to Social Media to vent their frusttrations with the Argentinian. One fan, posting on Tottenham's facebook page, wrote

"I cannot believe that just as we qualift for the Champions League, Lamela wants to up and leave? That's as far from being reasonable as I can imagine. If he stayed, we might have a shot at building a side that can challenge for European Honours, but now, it's hard to see what Poch is going to do if he leaves."

It does seem difficult to see how Tottenham would replace Lamela, and with Real, Barcelona and PSG all sniffing around, time may be running out.
Login to Quote