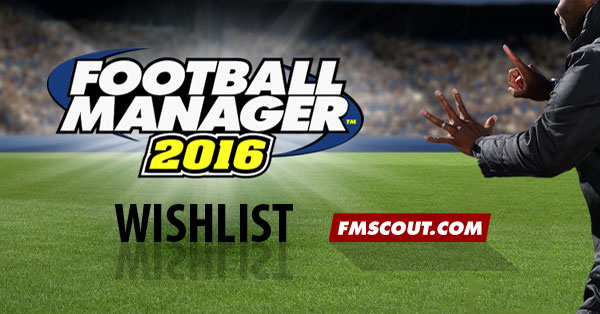 ▪ What new features you'd like to see on FM16?
▪ What did you like about FM15 & what did you dislike?
▪ Are you happy or disappointed with FM15 overall?

Stam
7 years
@iRoba:
Can you elaborate on this? More diverse tactics, how? Not sliders I hope, because I doubt there's a chance of them coming back.

paokarakis
7 years
Manage the academies !
Interaction with the fans like what happend in Germany with Dortmund and Stuttgart but in commentary just to boost the morale after some bad results !!
Login to Quote

Denzy
7 years
Be able to Manage the Under 21's / 18's / Reserves, without being manager of the Senior team
1
Login to Quote

JasonRM
7 years
I think SI did a pretty good job on FM15, but more work needs to be done on the 3D match engine. For instance, 1v1s should be scored more often, the keeper should attempt to save rebounds, poor back passes are rarer, and short corners should be nerfed.
2
Login to Quote

Arjen Robben
7 years
Teams not spending upwards of £25/30m on players only to never actually play them.
Login to Quote

ImDonkey
7 years
1) On FM13 you could choose your target man and prime creators I would love to see that being brought back maybe even bring back the other ideas they had like type of marking or bars which you can move from left to right to determind how much you time waste etc. like this : http://i57.tinypic.com/mc7kol.png

In my opinion that was a lot better than just team instructions sure you can set individual instructions but they don't seem to have the same effect and seem way to complicated for me. I know some people are brilliant at tactics but I have also seen a lot of people struggle with them me included.

2) I would also like them to get rid of the black/grey stars when scouting players as they are just pointless imo. They add nothing half the time potential means nothing you can turn anyone from a world class to a good prem or vise versa.

3) I wish there was a way for head of youth development to have a more active role such as you giving them control to watch over the u21s and u18s I know they can do that anyway but it would be nice for them to pick who to loan out them to recommend players to come up to the first team etc it would add a bit of realism.

4) Players complain way to much

5) Sometimes I wish they would have more of a variety when speaking to players. This is just an example. A player wants a new contract but his agent wants ridiculous amounts so you try to lower it down and the agent flat out rejects you and won't let you speak to them again. The play then comes unhappy and you can't even explain to them the agent rejected or is asking to much or is not letting you speak or whatever and then it makes others unhappy and it causes so much hassle.
1
Login to Quote

Th3RealLegend
7 years • Edited
More realism with the results/table. I mean for example:
In about February 2016 in my PL save the table looks like this: 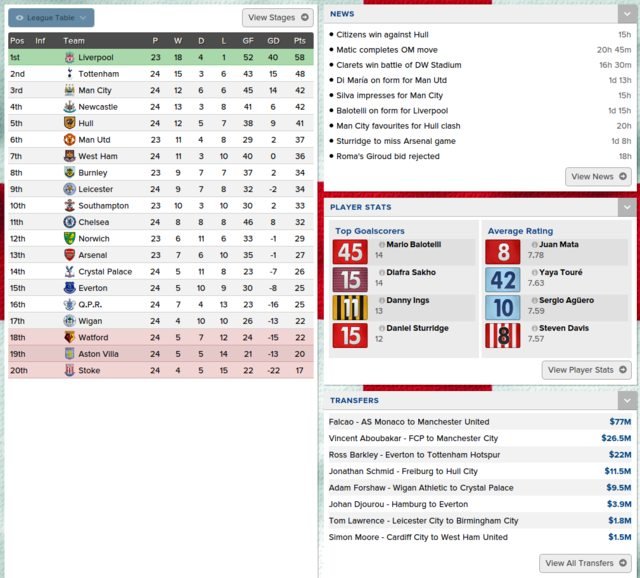 Yeah, Hull and Newcastle competeing for CL football, while Chelsea and Arsenal rot in the bottom half of the table.
Login to Quote

Atoobie
7 years
I think the ability to give players initiatives would be nice, for example you could draw a suggested run for a certain player to add as a player instruction if you like.

I'd also like to see transitional tactics, where you can set out how youd like your team to move from defence to attack, I find theres a fault in the game with one striker and that is that your build up play has to be slow for it to work as counter attacking is seen as a defensive strategy by the game, so I'd set up a transitional move where I have a winger with high anticipation to gamble more often and pre-empt for clearances and tackles in order to spring a quick counter.
1
Login to Quote

Walter
7 years
Firstly I think FM15 was a huge improvement from FM14 and the game has taken a lot of strides. The addition of attributes for our own manager was fantastic, but now, I think after certain periods of time or specific trophies or achievements, we should get the option to add people to our own 'Favoured Personnel' list or 'Favoured Club' after winning a title or something.

And I do think even more diversity when speaking to players/press is needed. Still I get players complaining to me and I can't tell them why they're not starting/why they don't have a new contract etc.
1
Login to Quote

Laurens
7 years
Designing your own kit? Every year clubs change their kits, I would love to see that in FM. What I don't like of FM 15 is that there are so much matches with huge scores and unrealistic come backs. Last week I was with Ajax 5-0 behind against Bayern Munich (first season) and the match ended in 5-6. I wouldn't mind some improvements in the graphics and maybe more things with the fans.
3
Login to Quote

Fahmi
7 years
I want Many country was unlock all.
Login to Quote