After another season with a huge points gap behind Bayern Munchen, Borussia Dortmund Head Coach Jurgen Klopp quit the Westfalenstadion through mutual consent. Agreeing with the Dortmund board the decision to step down before the 2014/15 season.

Mats Hummels and Roman Weidenfeller, Captain and Vice Captain respectively, have also made an official statement;

'We all (at Borussia Dortmund) want to thank Jurgen for his time here and what he brought us, and helped us become better footballers. Danke Kloppo.'


So no one liked the other story line I did, I'd rather write a story you guys enjoy than one you don't.
Login to Quote

Dortmund baffle all as Iconic announced as new boss


After a queue of Managers from around the world (and Paul Lambert) were linked with the task of managing Borussia Dortmund the BvB board have thrown a curve ball by appointing unknown manager Mats Iconic. The 'forgotten man' of German football had his playing career cut short by injuries at the age of 29, but now he's back in a coaching role after being part of the Germany backroom staff st the 2014 FIFA WORLD CUP.

With his arrival Dortmund could play a 4-3-3 formation like this; 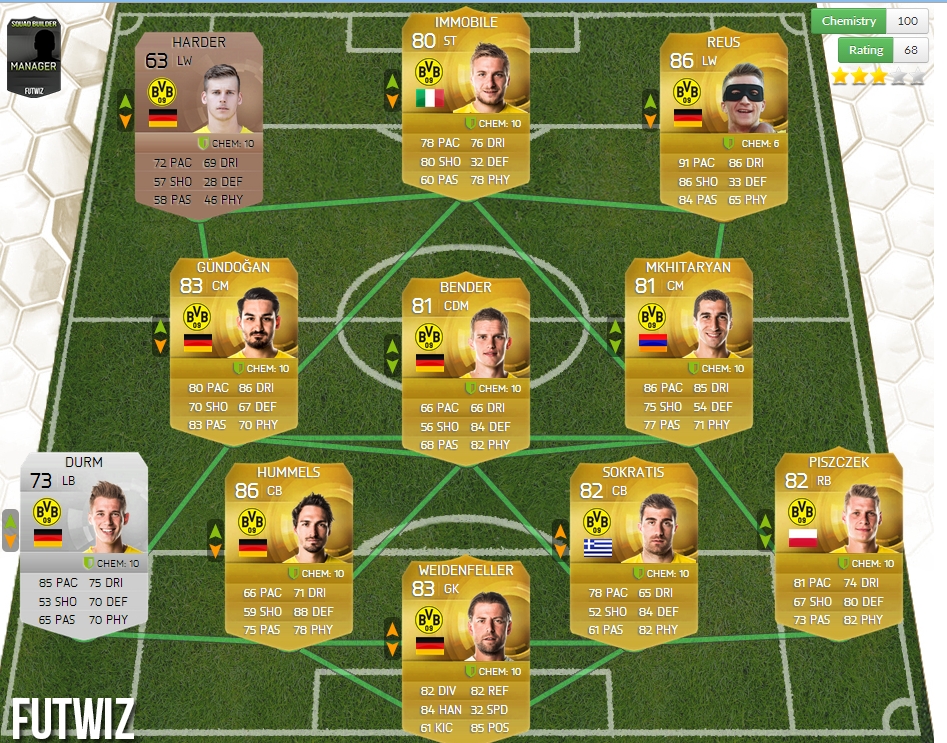 'I'm so grateful to have been entrusted with this position, this is the dream job for me and will do all that I can to make us even greater.'
Login to Quote

Three in one out as Dortmund make first transfers

Going the other way was Serbian defender Neven Subotic, who swapped Westfalia for Madrid in a £17,500,000 deal to Real Madrid. It is also believed that his former club will get 15% of the profits from any potential sale.

Starting with Ivan Klasnic, the thirty four year old has agreed a two year contract worth around £2,700 a week, with a one year contract extension if he reaches five Bundesliga appearances in the 2015/16 season.

Next Manchester United's Flying winger Ashley Young was told that he has no future in Louis Van Gaal's plans for Manchester this season, and has thus seen refuge in Dortmund agreeing a three year contract on a salary of £64,000 a week for £5,750,000.

Also Max Kruse has swapped Borussia Park for Borussia Dortmund for £16,000,000 and becomes the fourth striker to sign for Dortmund this summer (the others being Adrian Ramos, Ciro Immobile and of course Ivan Klasnic) following the departure of Robert Lewandowski to FC Bayern Munchen on a Bosman freebie.

Dortmund have also transferred listed Oliver Kirch and Marcel Schmelzer deeming them surplus to requirements. With interest from SC Paderborn for Kirch and Sevilla as well as Bayer Leverkusen04 a deal for both should be completed in the near future.

And finally BvB are still rumoured to be in the market for a Goalkeeper, with Roman Weidenfeller not getting any younger talks are on going between Bayer Leverkusen04 for their talented young shot stopper Bernd Leno, with thirteen Under 21 caps for Germany he is seen as the long term successor to Weidenfeller. But with Bayer reluctant to sell don't expect him to leave for anything less than £25,000,000.


After weeks of negotiations between Bundesliga giants Bayer Leverkusen04 and Borussia Dortmund the former's Goalkeeper has upped sticks in a move to last season's DFB Pokal and Bundesliga Runners Up. Seen as the long term replacement for the BvB Vice Captain Roman Weidenfeller, Leno is now the record signing for Dortmund after agreeing a £30,000,000 (€37,000,000) beating the record set by Armenian Henrik Mkhitaryan (£23,500,000/€28,000,000).


http://cdn2.footballmanagerstory.com/wp-content/uploads/2013/10/fm-2014-player-profile-of-bernd-leno.jpg
Leno finally got his move to Westfalia.

After he revealed his intentions to join The Signal Iduna Park Leno was Transfer Listed and Dortmund made sure they sealed a deal quickly to sign him. This deal could have a detrimental impact on Bayer04's season, with a report of serious unrest in their camp, players such as Emir Spahic, Stefan Kiessling and Heung Min Son all casting doubts over their future at the BayArena, already Roger Schmidt faces a challenge in his first season in the German Bundesliga.

Polish Right Back Lukas Piszczech has also completed a medical with Ligue 1 holders and is expected to sign within the next few days for a fee of around £17,000,000, Dortmund are reportedly looking at Red Bull Salzburg Right Back Peter Ankersen as well as their own young prospects Felix Passlack and Jannick Bandowski as replacements for Piszczech. 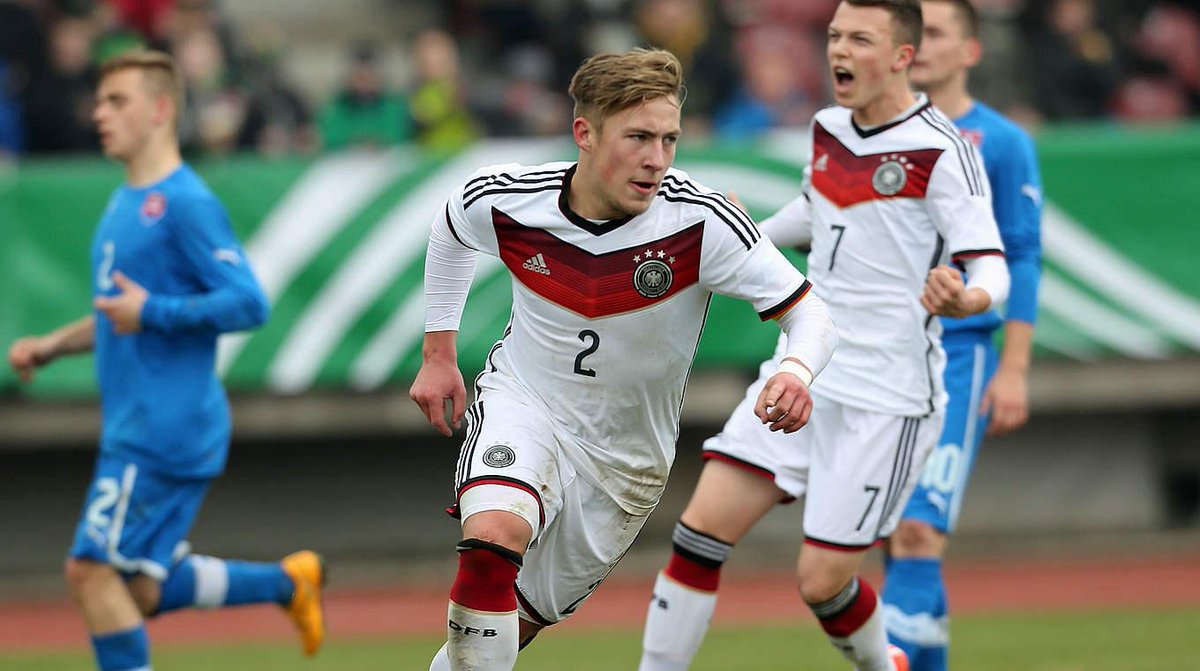 No1VillaFan
7 years
I hope you get Young firing on all cylindars!
1
Login to Quote

He did well in the original Borussia Dortmund; Life after Klopp so I'm backing him to do it again!


After the acquisition of Vasilis Torosidis from Roma for an estimated £5,000,000 you can expect Borussia Dortmund to stop the spending, that is if you believe everything that Mats Iconic says.

'We've strengthened exactly where we needed to, we needed another Striker for depth in the frontline, we needed to better our Goalkeeping options and we did that, we needed to get some extra out wide we did that. And we did this all within Financial Fair Play. I am confident that our signings will benefit us in the short term, long term and medium term.'

With Lukas Piszczech having completed his move to PSG Peter Ankersen looked to be then next BvB Right Back, but instead Torosidis was the man who took over the mantle of the much loved Pole. After two marginally successful seasons in Rome the twenty nine year old (with seventy Greece caps to date) is certainly not lacking in experience with 236 Career Apps to date and should provide the experience to help nurture Felix Passlack as he grows into his role as one of Dortmund's key men.


http://media.urbanpost.it/wp-content/uploads/2014/01/Vasili-Torosidis1.jpg
Torosidis will need to perform well quickly if he is to win over the fans.

Sticking with new signings and Dede, who won the Bundesliga twice with the Westfalia club (in 2002 and 2011 respectively) and was also a Runner-Up in the German Cup in 2008. Was happy to voice his opinions on returning to the Signal Iduna Park.

'I'm delighted to be back, I feel so much love to the fans here, they made me feel so welcome. So when Mats approached me I just couldn't say no. I really cannot wait to play for Borussia Dortmund again.'

After spending three seasons in the Turkish Super League with Eskiserhispor he was a Free Agent for a few month after his contract expired in the summer and he decided against an extension. He should offer top quality Backup to Erik Durm and is likely to be the final signing of the summer for Borussia Dortmund.
Login to Quote

InvertedWingbacks
7 years
solid transfers mate, and some really good writing as normal! keep it up!
1
Login to Quote

THANK YOU!! Some faces will leave yet and I may bring in someone in January.
Login to Quote

LLMCrumble
7 years
Some interesting signings and a good start to the story, good luck.
1
Login to Quote

Langerak to Bayer04 and Schmelzer off to Wolfsburg?


Just eight days after Bernd Leno confirmed his departure from Bayer Leverkusen04 Australian Mitch Langerak has been unveiled as the Keeper to fill the gap. After five years in Westphalia it was an emotional farewell to Langerak, but he was quite optimistic and took it well.

'I knew once Bernd Leno came that it would be hard for me, having to compete with Roman (Weidenfeller) and (Bernd) Leno was always going to be tough and I wasn't that surprised that I was deemed surplus too requirements. I'll come back there anytime but I'm looking forward to being in and around the first team at Levekerusen.'

Although there is still doubt in many Bayer fans minds over whether Langerak is a quality keeper, one fan voiced his opinions in a Leverkusen Fanzine saying;

It remains to be seen whether Bayer04 will reinvest in new talent but they are still a top quality team regardless and will always be a threat with players like Hakan Calhanoglu, Son Heung Min, Lars Bender and Karim Bellarabi.

Also looking likely to depart is German Left Back Marcel Schmelzer who after ten years at the Signal Iduna Park could complete a £4,000,000 move to VFL Wolfsburg, the now rich Wolfsburg are looking to complete a move for Schmelzer after his future was placed in doubt after Dede rejoined BvB on a Free Transfer.


http://www.spox.com/de/sport/fussball/bundesliga/0908/Bilder/marcel-schmelzer-514.jpg
Another player with a long time association with BvB, Marcel Schmelzer may sever ties with the club after almost a decade on their books.

With four Left Backs now in the First Team squad (Eik Durm and Jannik Bandowski making up the others) he may find himself down the pecking order with Mats Iconic seeming to favour giving younger players a chance. With Erik Durm showing his talent and youngsters such as Jannik Bandowski and Felix Passlack (Pictured) breaking through it may be time for a farewell for Schmelzer.

At Wolfsburg he would take the daunting task of debunking Swiss international Ricardo Rodriguez, who after a Fantastic World Cup, is brimming with confidence and ability, but he would likely be given his chance to be rotated into the team and stake a claim for First Team football.
Login to Quote

Thank you am I am trying to make different signings to the original LaK and welcome to fmscout.com!
Login to Quote

After a bitterly disappointing draw with Monterrey in the opening game (Milos Jojic scored twice before a 78th minute Humberto Sauzo equaliser saw the Serbian's brace cancelled out) we went on a terrific a run, winning the last four scoring five without reply in the process. The solidarity in defence was a major plus point as we head into our German Super Cup meeting with FC Bayern Munchen we will have to perform at optimum level to win our first trophy of the season.

Player of Pre Season goes to Serbian Midfield Maestro, Milos Jojic, our top scorer he ran the show throughout the Warm-up Games, scored the winner against Sevilla and almost won us the game against Monterrey.

Turkish youngster Oguzhan Kefkir has been a breakout star in Pre Season, the Turkich Wideman scored the eventual winner against SK Sturm Gratz after just five minutes of football and also assisted Lukas Pisczech, Ciro Immobile and Milos Jojic (twice) for their goals. He may get more chances to shine this season.


In case you were wondering why this Pre Season update was so short it is because I am trying to get to the season as quick as possible. And also I want your feedback on this;

Please answer this as it will really affect the layout of the story.
Login to Quote

You are reading "Borussia Dortmund; Life after Klopp 2.0".