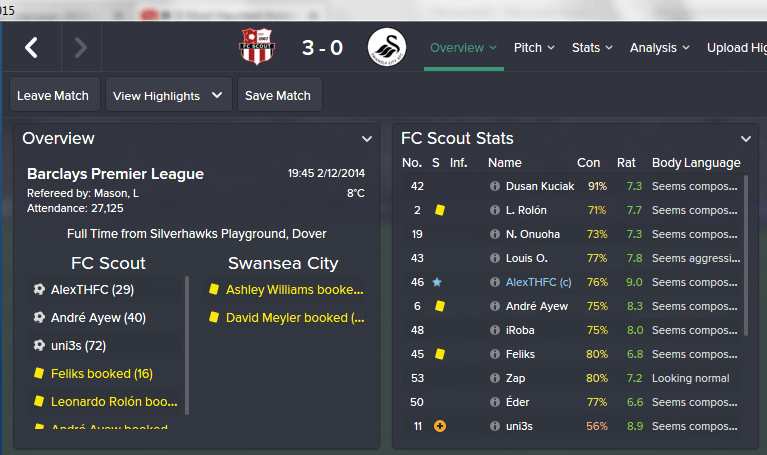 Firstly its, a good win against Swansea. FC Scout players were really impressive in this game, and they deserved this win. They created loads of chances, and they did a good job keeping the ball around. 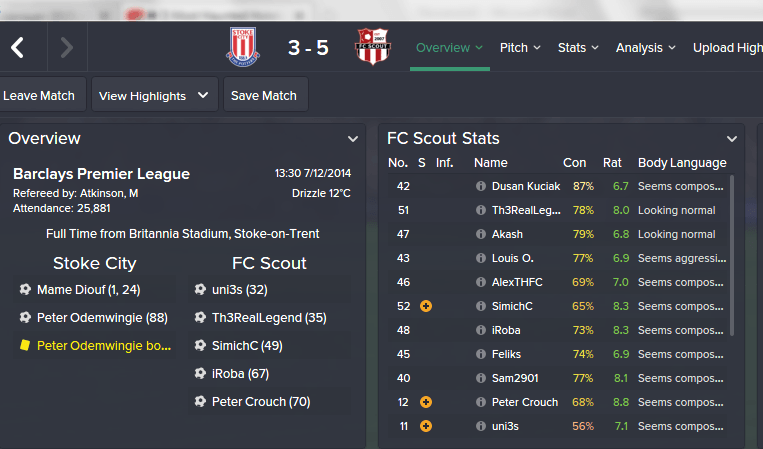 Another great performance from Dover based team. They managed to get back from being 0-2 down, to win a game, in magnificent fashion. It was great show in Stoke, and I was left pleasantly surprised after the game. 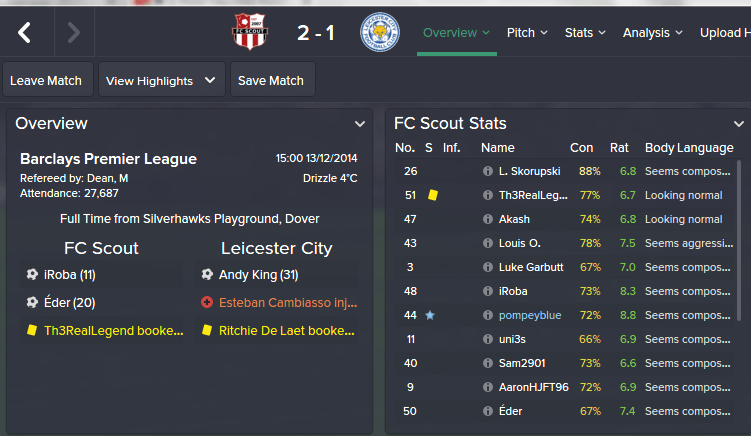 Well, it was as good game, as the previous two games, but it was still nice performance, and they deserved this win, since I think they did better job, than Leicester. But I wouldn’t be surprised if that game ended in a draw, because Leicester also, did a good job, but they just couldn’t find another goal. 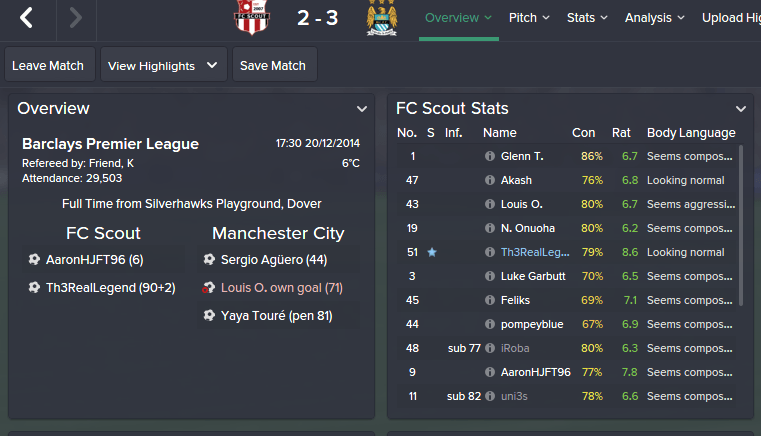 And like in previous months, another terrible performance, and a loss, but to Man City. I just can’t find a recipe for ‘bigger’ teams. But I guess, they still managed to score 2 goals, and lose by 1 goal, which isn’t necessarily bad thing. 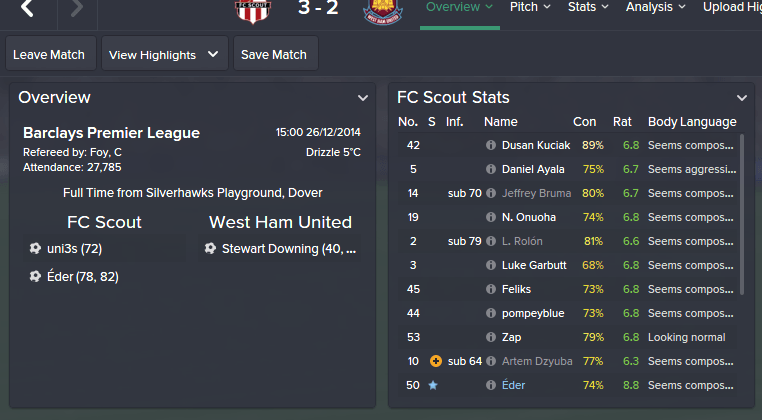 Surprisingly, FC Scout puts a few good performances this month. And this was one of them. Although West Ham put up a fight, they just couldn’t fight for a point, and ended in a good win for FC Scout. 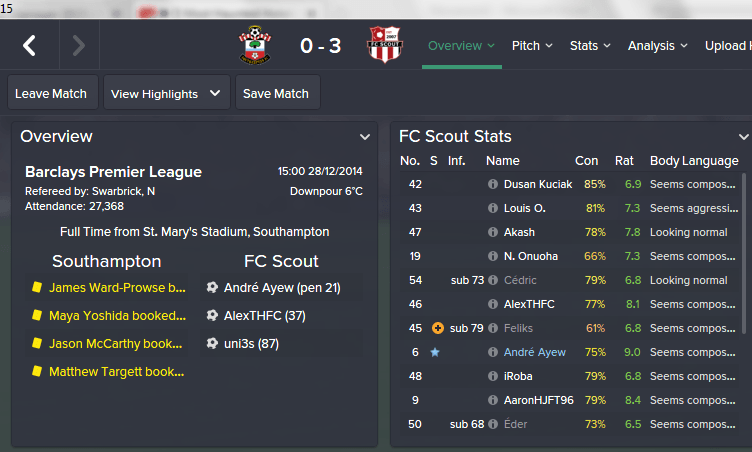 And with final game in the month of December, FC Scout won after amazing performance in away game against Southampton. Although Southampton had few chances here and there, they just were really poor with their shots, and they ended in a good win for FC Scout.

A 5th place for FC Scout. Which would mean, that I could fight for Champions League next season. With 20 games left, I could fight for 1st place, but currently I have 8 points less than 1st Chelsea, and they are in really good run, so it would be really hard to go for top spot. 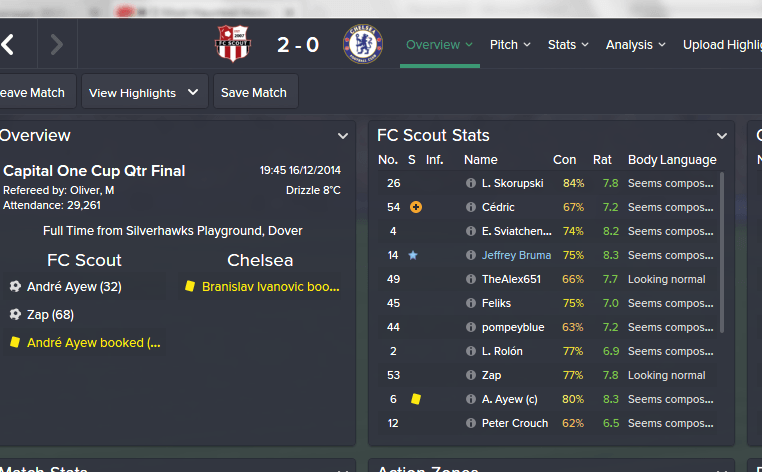 Semi-Final
In Semi-Finals of Capitol One Cup, FC Scout will face Norwich City. I think they are a team which could put up a fight, but I am really optimistic that FC Scout should win and make it into the Final.
Login to Quote

I could add more players, but they wouldn't be in my story.
Login to Quote 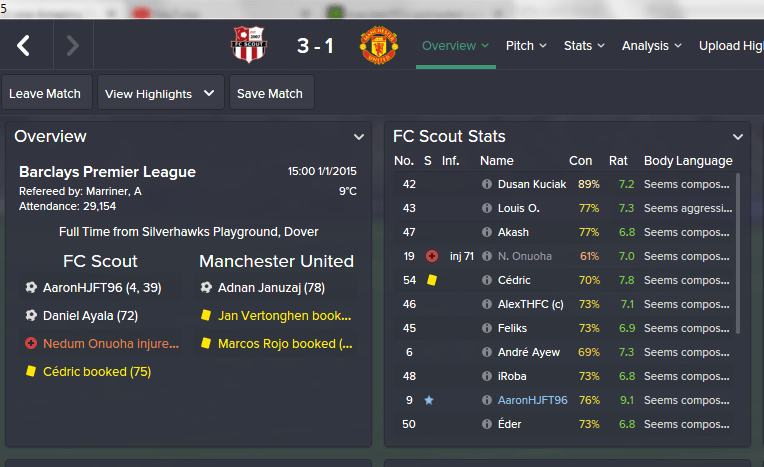 After the last heavy defeat against them at Old Trafford, FC Scout’s players were on the way for their revenge at home. And what a game that was, both teams created their chances, but it was FC Scout who was better, and they managed to win that game. Although it wasn’t as big win, as I would like, but still 3-1 win is pretty good result. 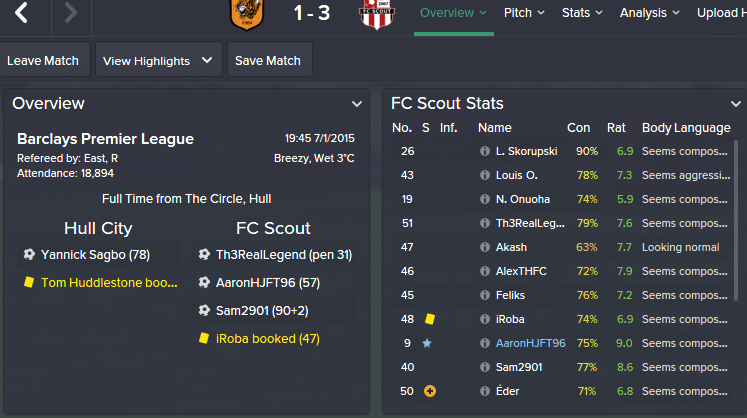 Another good performance for Dover-based team. And it’s another 3-1 win. I have to say that it was another great performance for FC Scout. I think it is a shame, that Hull had scored a goal, because I think my team should have won that game without conceding. 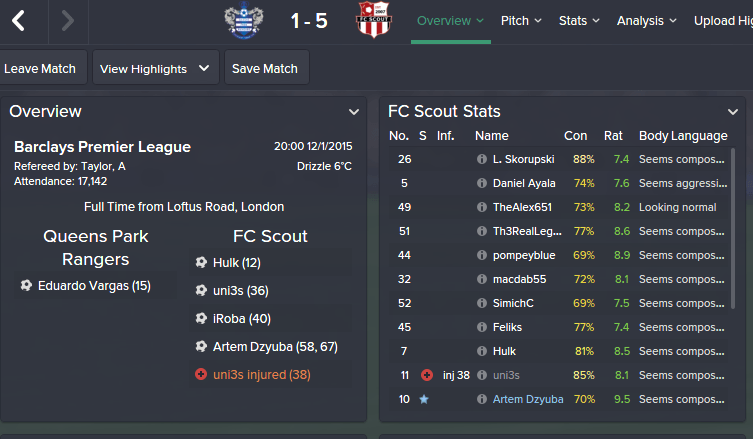 And what a game this was. 5 goals scored, which doesn’t happen every game. Really great performance from FC Scout. I think it was particularly good game for Artem Dzyuba, since he had scored 2 goals AND he had 2 assists. But in the end it was good game for every player of FC Scout. And it was really pleasing to see Hulk scoring in his debut. 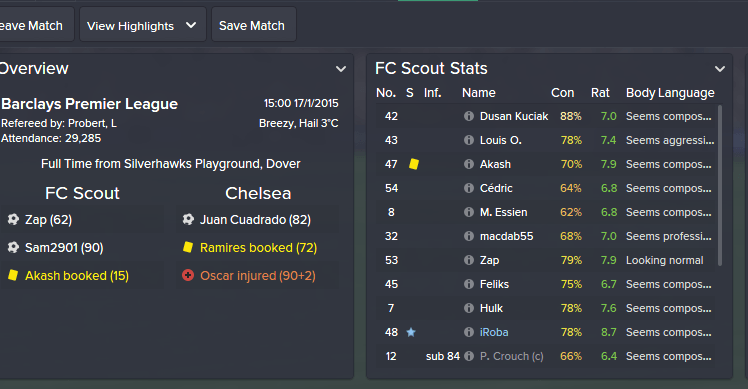 Well not as good performance as in previous games, but FC Scout did a good job in that game, so I am still happy. After Chelsea scored the equalizer, I thought, this game will end in a draw, which I think would be reasonable result, since both teams played similarly good. But with good last action Sam was good enough finisher to score for the win. 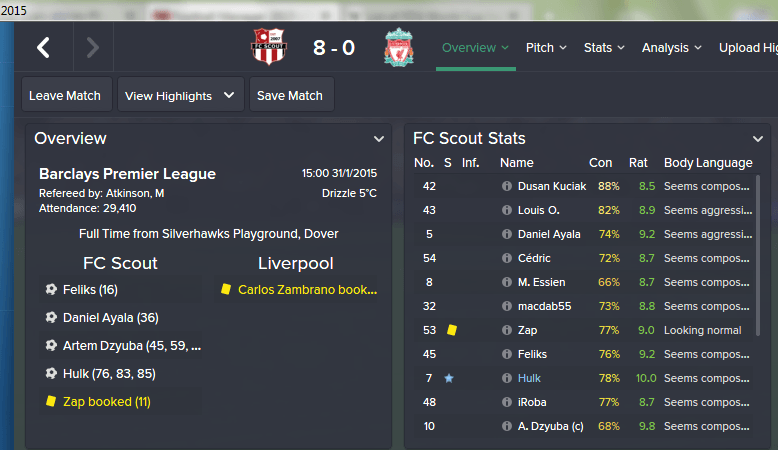 An incredible performance by FC Scout. In first game against Liverpool at Anfield, there were also 8 goals, but game ended in 4-4 draw. But in this game, The Amazing Team was just amazing, it seemed like their every attack ended in with a goal. I was particularly impressed by Artem Dzyuba who had 3 goals and 2 assists, and Hulk who did even better job with 3 goals, and 4 assists.

After really great performances lately. FC Scout fights for the top spot at the end of the season. Currently sitting 2nd with 1 point behind 1st, and 1 game in hand (which will be played against Everton). So, I think that if the form continues, FC Scout could end up, as champions in their first season in Premier League. 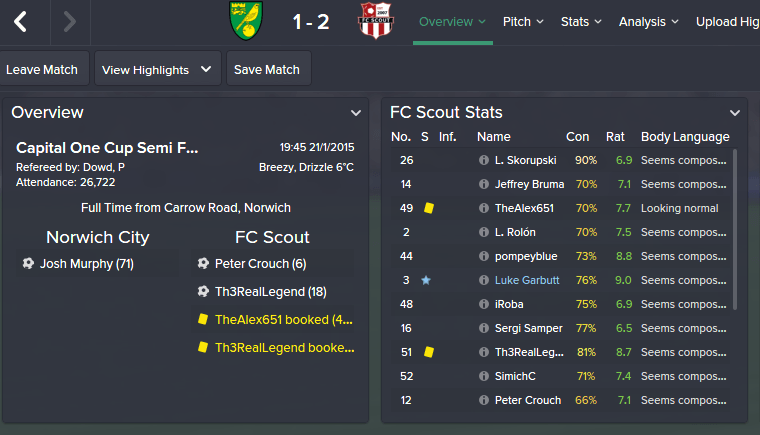 First game of the semi-final was really good game for FC Scout. But I have to say that I had my doubts about this game, since Norwich did also a good job with the ball. But after Norwich scored for 2-1, I was afraid that they might comeback to 2-2. But The Amazing Team managed to win that game, and they went to play at home with good result, after away game. 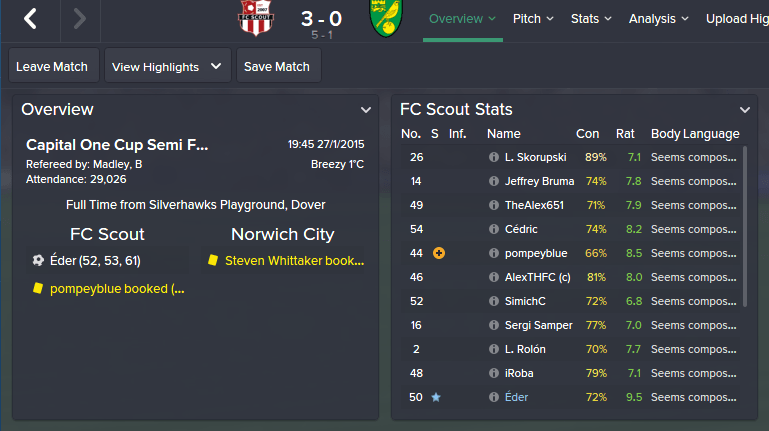 I was comfortable before the game, since we managed to win 2-1 in away game. After 0-0 at half time, I thought that game could end up in a draw. But then Eder showed his truly good skills, and managed to score a hat-trick. Those 3 goals gave him top spot in Capitol Cup top goalscorer with 6, so he is in good position to be top goalscorer in that cup. 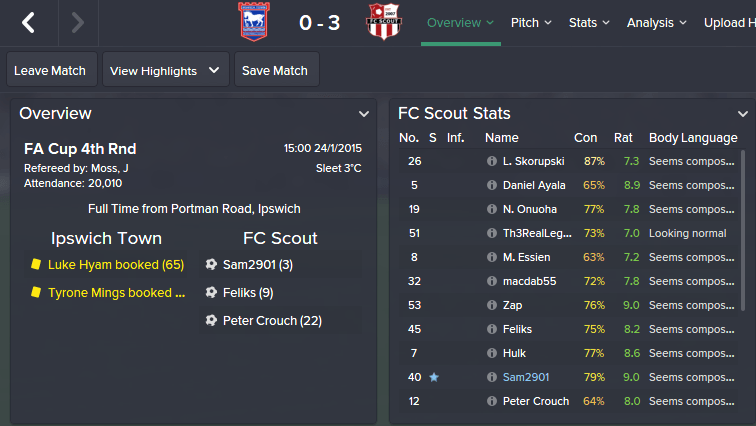 Well, I have to say, that I expected a win from this game, and a good win that was. Although Ipswich fought until the end, they didn’t managed to score a single goal. Which is kind of shame, but still FC Scout is my team, and I am happy with that 3-0 win, which is really good result.

Transfers:
So, 3 players signed. And pretty loads of money spend. But I have to say that I am pretty pleased with the transfers. I think Hulk can bring a lot to this team, since I have paid for him, a lot, but he is also a good player.


January Awards:
Manager of the Month: 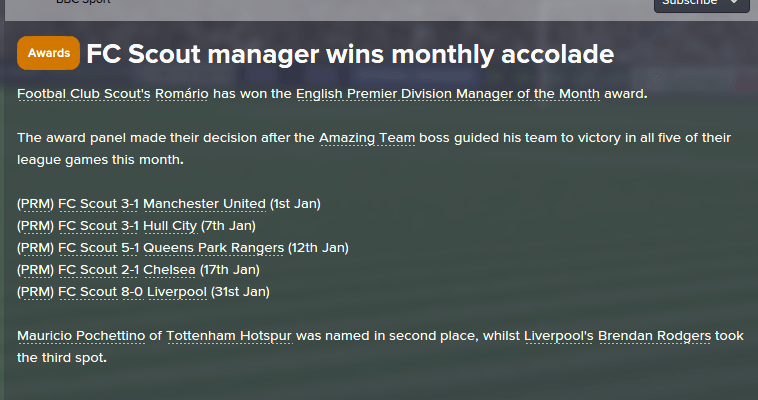 Young Player of the Month:

You are reading "A story of one Amazing Team".