Aaron
5 years
Not bad but not great, despite the victory over Napoli. Roll on next season!
Login to Quote 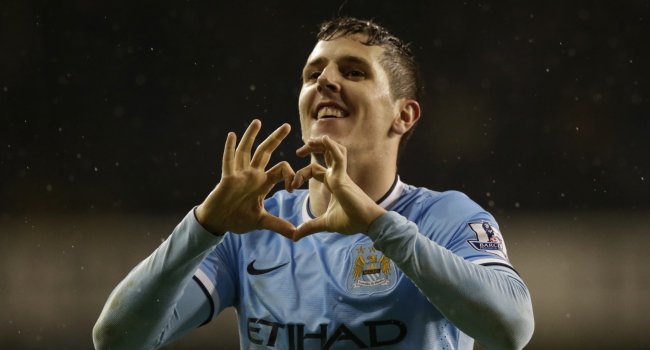 Going into the first game of the season Klopp knew 3 points was mandatory. City had all the advantages a strong team, playing at home and a relatively easy team in Crystal Palace (no offense). The Etihad stadium was buzzing with excitement for the start of the Premier League season with no less than 45,000 inside the stadium.

The ref blew the whistle to kick things off and the crowd roars there loudest. A few passes hear and there and everyone was on there feet... but it was short lived. The first 10 minutes of excitement died down and there wasn't anything to shout about for the first half.

A Kick up the arse from Klopp at half time must have done the trick as The Citizens came out looking like a different team. Out of nowhere a spark of creativity flowed as the passes moved from one pair of boots to another.

Only a matter of seconds into the second half Aguero lofted a 40 yard diagnol pass to Silva who controlled it down. Sprinting down the wing Silva took the ball to the byline turning one player in the process. A pin point pass found the feet of new man Cristian Eriksen who struck a curled ball into the bottom left corner... GOAL!!!!!! The crowd roar in excitement as Eriksen wheels away in jubilation.

All but 2 minutes later the ball was at Kolarov's feet. He placed a pass to Eriksen's feet on the outside of the box where he held it up. With a quick turn he made a snap pass to Aguero inside the box who smartly nut megged Scott Dan as the ball fell to Jovetic. Without a thought Jovetic smashed the ball with his laces and the ball powered past the Palace goalkeeper... 2 - 0 THE CITIZENS!!!!

Jovetic added his 2nd of the game after a pin point through ball from Sergio Aguero left him in acres of space. One on one with the goalie Jovetic kept his cool and finished calmly putting the Citizens 3-0 goals to the good. After a quiet 30 minutes The Citizens where in again thanks to a snap shot courtesy of new boy Eriksen assisted by Aguero... 4-0 could it get any better.

From the resulting kick off The Mancs won the ball back and instantly hit on the attack. A lovely cross from Konoplyanka found Jovetic at the near post who flicked it past the keeper and into the net. 5 goals to nil what a game. But Klopp and his men where not finished there as the clock ticked into stoppage time a pass from Aguero found its way to Navas who struck it with venom, Palace keeper Hennessey couldn't get near it as it struck the back of the net capping of a wonderful victory for The Citizens. 6-0 and 3 points Klopp was jubilant. 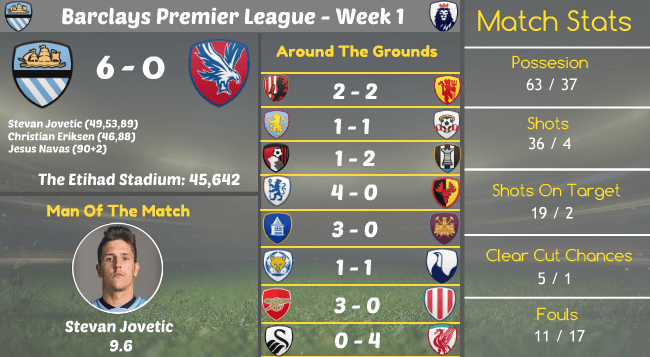 After an outstanding 6-0 thriller Klopp and his men would travel to St. James Park next to take on Newcastle. Newcastle who won there first competitive fixture against Bournemouth last weekend where no easy team to beat. Players like Ayoze Perez & Cabella where key in Steve McLaren's plans.

When the clock hit 3 the ref blew the whistle and match day two was underway. Newcastle started very positively testing Joe Hart from about 26 yards out in the 11th minute. As play went on Manchester City found themselves on the break after a long ball from Jesus Navas. The ball planted down deep in the oppositions wing and left Oviedo and Silva to chase.

Silva got the ball first and planted a cross to the edge of the box where Aguero was stood. The ball fell perfectly to his feet in which he controlled it and curled the ball towards the top left corner..... only to be met by the flying hand of Tim Krul.

The Referee blew his whistle signaling for the end of the first half. Once again The Citizens had failed to make anything off the first half what would Klopp say. It would seem once again Klopp's words had sparked some creativity in the players as they started to pick up the tempo.

Coming into the 57th minute Kolarov picked up the ball deep inside the Geordie territory for a throwing. The ball was thrown to the feet of Konoplyanka who was just inside the box, a quick one-two between Kolarov & Konoplyanka left Oviedo confused and Konoplyanka took advantage. Konoplyanka played a pass back to Kolarov who found Eriksen, Eriksen then played a smart ball back to Konoplyanka who squeezed the ball past Krul at the near post. 1-0 THE BLUE MOON!!

All but 10 seconds later from the resulting kick off Aguero was taken down inside the box by Tiote who recieved a yellow card. The ball was placed on the spot and the stadium went silent. Aguero lined up his shot, ran at the ball and placed it in the bottom left beyond the hand of Tim Krul. 2-0

The clocked surpassed the 70 minute mark and Toure had the ball. Taking on a player Toure advanced over the half way line before being swept of his feet by a vicious Cheik Tiote. Jonathon Moss called over Tiote as he dug in his pockets, despite the pleading from the Toon players Tiote was off.

As the game ticked on the 10 man disadvantage was wearing Newcastle down, it was only a matter of time before The Citizens would strike again. Konoplyanka's resulting cross was cleared out of the box but only as far as Nasri. The ball was under the control of Nasri's boots as he played in Jesus Navas for the third of the game.

The 90 minutes ended and the ref blew the whistle. The Citizens had done it again another 3 points, the dream start that Jurgen would of wanted. It wasn't all fun and games though as the real test started. Tottenham where next and the followed by Liverpool, very tough indeed. 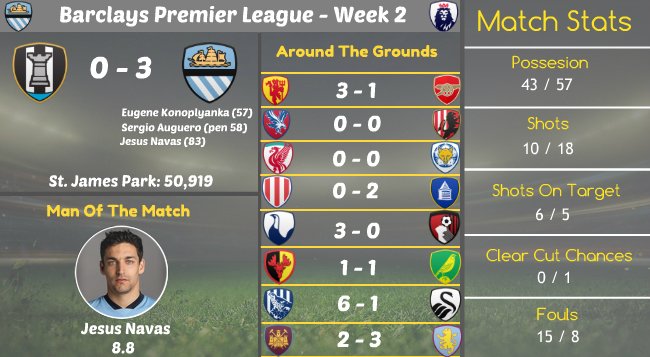 The final game of August saw Tottenham travel to The Etihad in what was considered City's toughest match yet. Everyone loves a top clash and no one more than the fans who turned up in a excess of 46,000.

It wasn't long before the game begun and the atmosphere was huge. Fans across the world were watching on Sky Sports with the game being televised. A drab 15 minutes into the game and the ball was at the feet of Aguero. Taking the ball past two players Aguero struck the ball cleanly from about 35 yards out. The ball missed towards the goal but was interrupted by the hands of Hugo Lloris.

The first half came to a close, not really what everyone was hoping for. Could Klopp once again give a magic team talk? The players walked back out and set up on the field. The second half kicked off with Spurs straight on the attack. The ball flew in and found Harry Kane's noggin, it perfectly bounced of his head toward the goal. The ball floated towards the bottom left but an outstretching Joe Hart managed to tip the ball away.

The second half was much the same as the first, boring with 1 or 2 chances. The clock slowly ticked on but no matter what changes Klopp made, Spurs facilitated them. Even subs of Konoplyanka, Dzeko & Mangala couldn't freshen things up.

The match drew to a close at a boring 0-0 although both sides will agree that a draw was a fair result on the day. Klopp wasn't too impressed with how his team played and expressed that in his post-match interview with the press. 1 Point for Klopp this week with a total of 7 on he board. The Citizens are sitting 2nd Place in the league behind a very surprising West Brom. 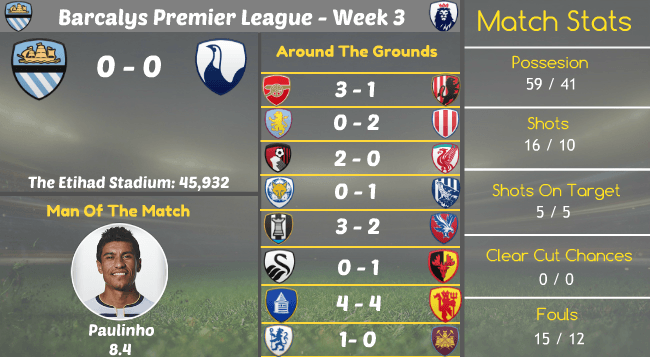 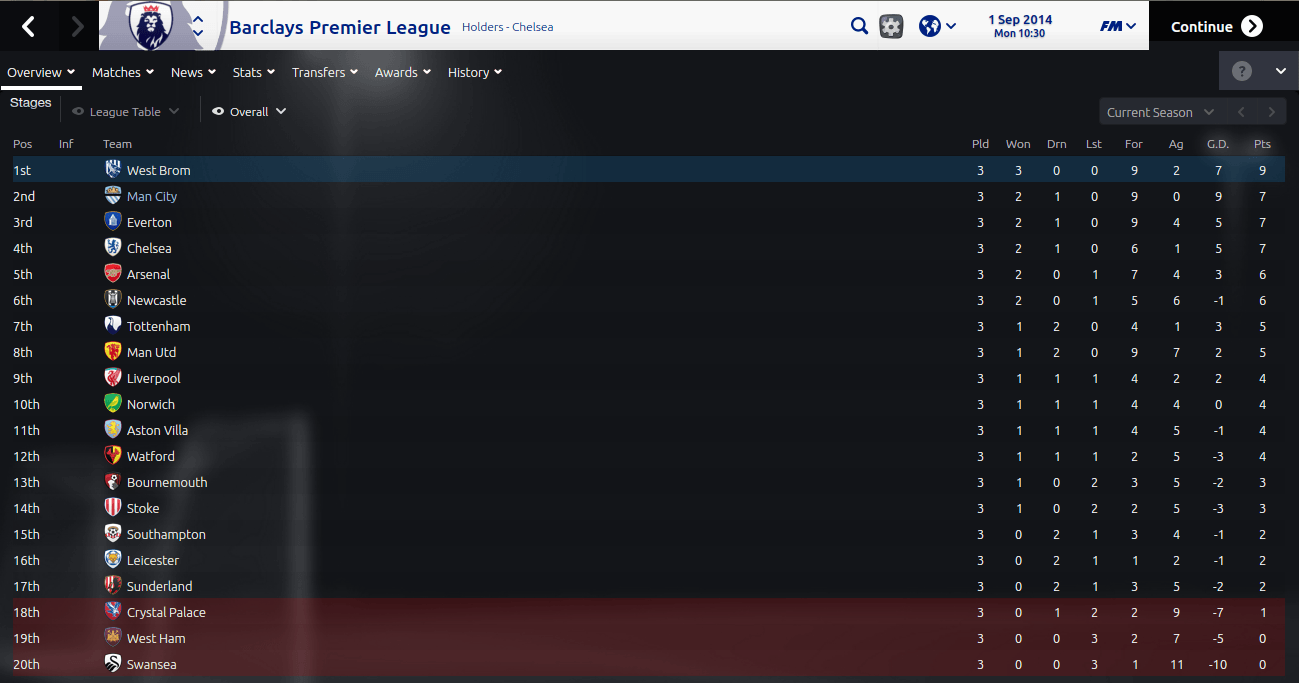 Manchester City - Player Of The Month 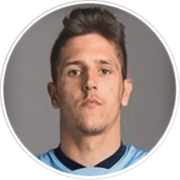 Stevan really impressed me this month to say the least. Scoring 3 goals in the season opener put him straight in my good books. He played really well in the Newcastle game although him and everyone else disappointed against Tottenham which was a shame. I hope Jovetic keeps on impressing as we have some tough games coming up and we're going to need some goals.

Aaron
5 years
Great update pal, West Brom are doing well! That Spurs result is a bit shit I should add

http://i62.tinypic.com/23wn12.jpg
In todays news we look back on last nights UEFA Champions League Group Draw. A total of 8 groups of 4 for where drawn last night with at least 4 teams representing England. This year sees Arsenal, Manchester United, Manchester City & Chelsea enter the competition.

Heads will be looking to Jurgen Klopp who almost won the champions league a few seasons back losing to arch rivals Bayern Munich, but with a fresh slate can he take Manchester City too the final of the UCL.

The Citizens who seem to be having a few injury problems will be looking to go as far as they can this year after there last season exit at the hands of Barcelona. The previous year Man City never made it out of the groups so they will be looking to push boundaries this campaign.

Although they have had a comfortable start to the season anything can change especially with fixture congestion and with the Mancs still in the Capital One Cup they're looking at a few 8-9 game months over the course of the season so rotation is key.

Aaron
5 years
Group of death? I'd say so. Good luck!
Login to Quote

Devzie92
5 years
Love the layout! and a good start to the season
Login to Quote

NorthernPride
5 years
Group is full of tough tasks, PSV and Gladbach are not to be underestimated! Great read so far, love the graphics!
Login to Quote