Nigel Pearson out, Nathan Limior in in Leicester City shocker July 8, 2014 - In a bit of a shocker, Nigel Pearson has been informed he won't be continuing to manage recently-promoted Leicester City in the Premier League, and almost immediately Leicester have announced his replacement, unheralded 35 year old American Nathan Limior. This move has created a lot of confusion amongst Leicester City supporters. All we know about Limior at the moment is that he spent his entire playing career in MLS as a midfielder, and after his retirement from playing, he took a job under Jurgen Klinsmann as a coach for the United States team.

---
What about Cuiaba?
That save wasn't really doing it for me. I love managing in Europe.

Why Leicester?
I like a good relegation scrap, plus I was partially inspired by the Bob Bradley/Preki rumors. I was hoping for Bradley. I would love to see him make the breakthrough one day, I think he deserves it.
Login to Quote

What kind of system will you run at Leicester?
As you may or may not know, I'm a huge advocate for wingerless systems. I'll have a multiple-system approach, with formations I can switch around and versatile players I can deploy in multiple places if need be. It'll be a struggle at first but I want to play possession soccer, I want to control the game.

Will we see any changes to the squad?
Of course. Stagnation is complacency, if it's true for the big teams, it's even more true for us. This team is going to be much different than when I came in, but that can only be a good thing. My mind is already churning with targets, even with our budget.

Will you focus on youth or importing talent?
Both. We need fresh blood now, but I want to stock the cupboard for years down the line. You can't just focus on one thing, you need plans for both the present and the future.
Login to Quote

Limior: You can have Konchesky

Not long after Nathan Limior has taken over the job at Leicester City, he's already started his first row. Rumors are that he's trying to force left back Paul Konchesky out, offering him to any club who'll take him, even for free. Konchesky doesn't seem to be in Limior's plans, as he favors the younger and speedier Jeffrey Schlupp in a left back role. Konchesky was said to have resisted Limior, but accepted his fate and is looking for a new team. So far, there are no suitors, however.
Login to Quote

Word from Leicester is that manager Nathan Limior has completely demolished the scouting set-up and is in the process of rebuilding it. An unnamed source says, "Limior has been unhappy at the amount of knowledge the current scouting set-up has, so he is looking to rebuild the network with scouts who may not be as good at gathering information, but already come with a great deal of international knowledge." Willie McKeown, Pauleta, and Patrik Andersson have been brought in already, and more are rumored to come in soon..
Login to Quote 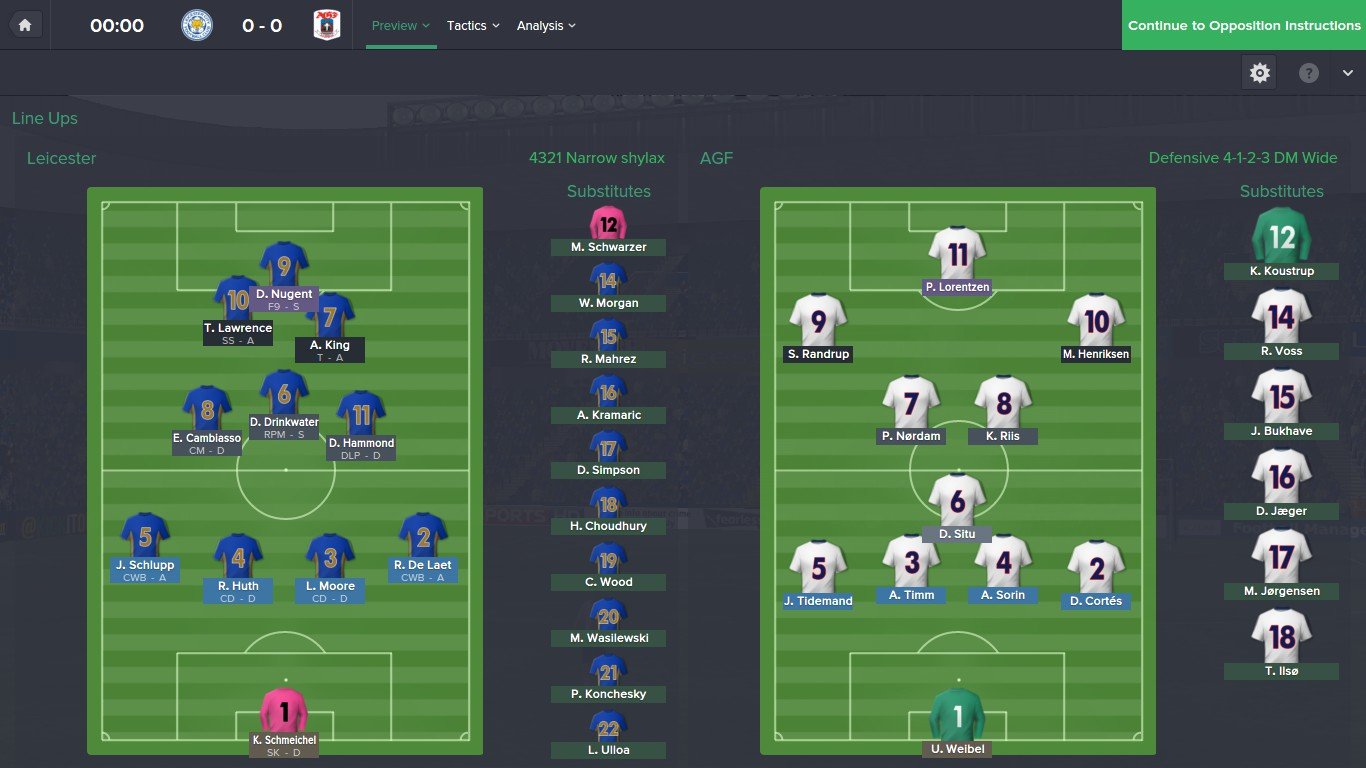 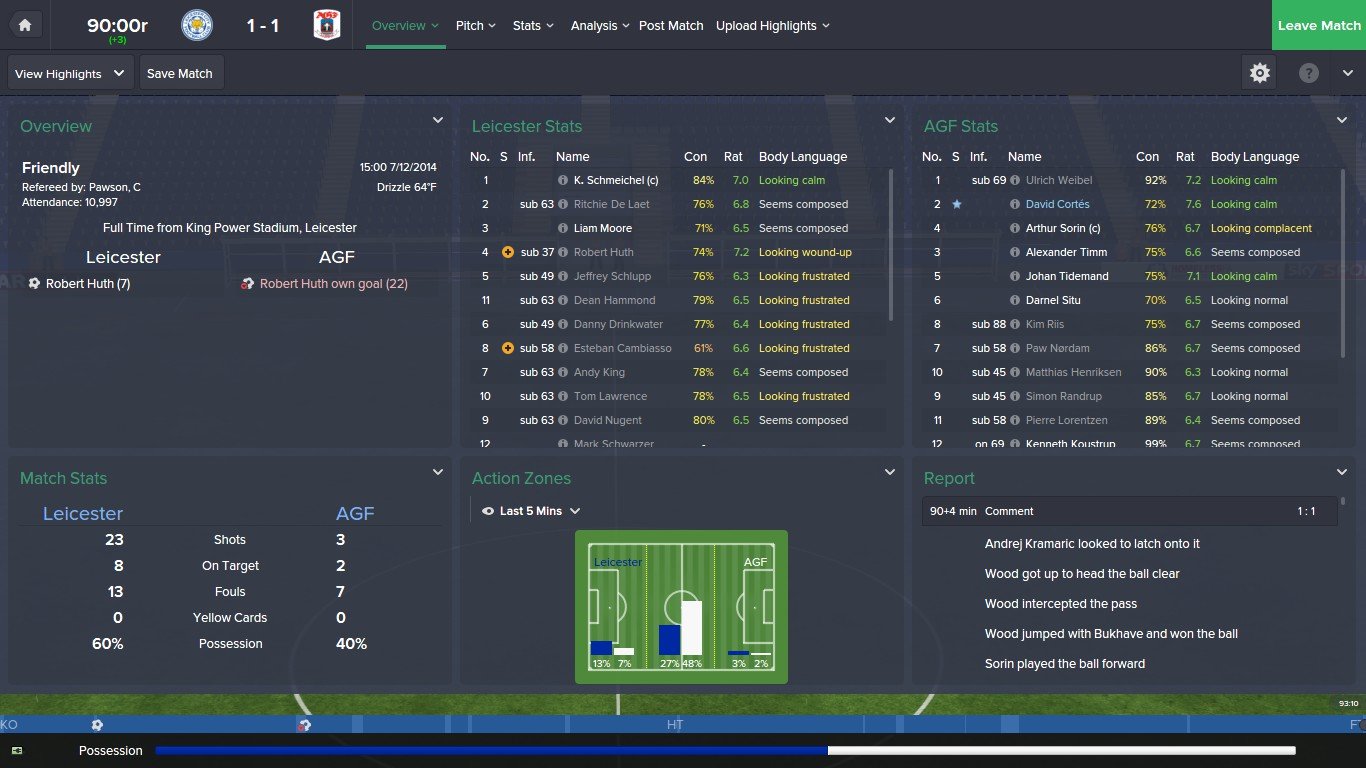 There are still some kinks to work out obviously as despite Leicester's dominance on the stat sheet, they could only get a 1-1 draw. Robert Huth was both the hero and goat, scoring both goals, first heading in a corner to give Leicester the lead, then knocking in an AGF cross to equalize. Also, Esteban Cambiasso gashed his leg and is out 2 weeks. A much better runout this time. David Nugent's shot trickled through goalkeeper Debonnaire's hands to open the scoring, then Huth scored another corner goal. Ulloa finished the scoring. 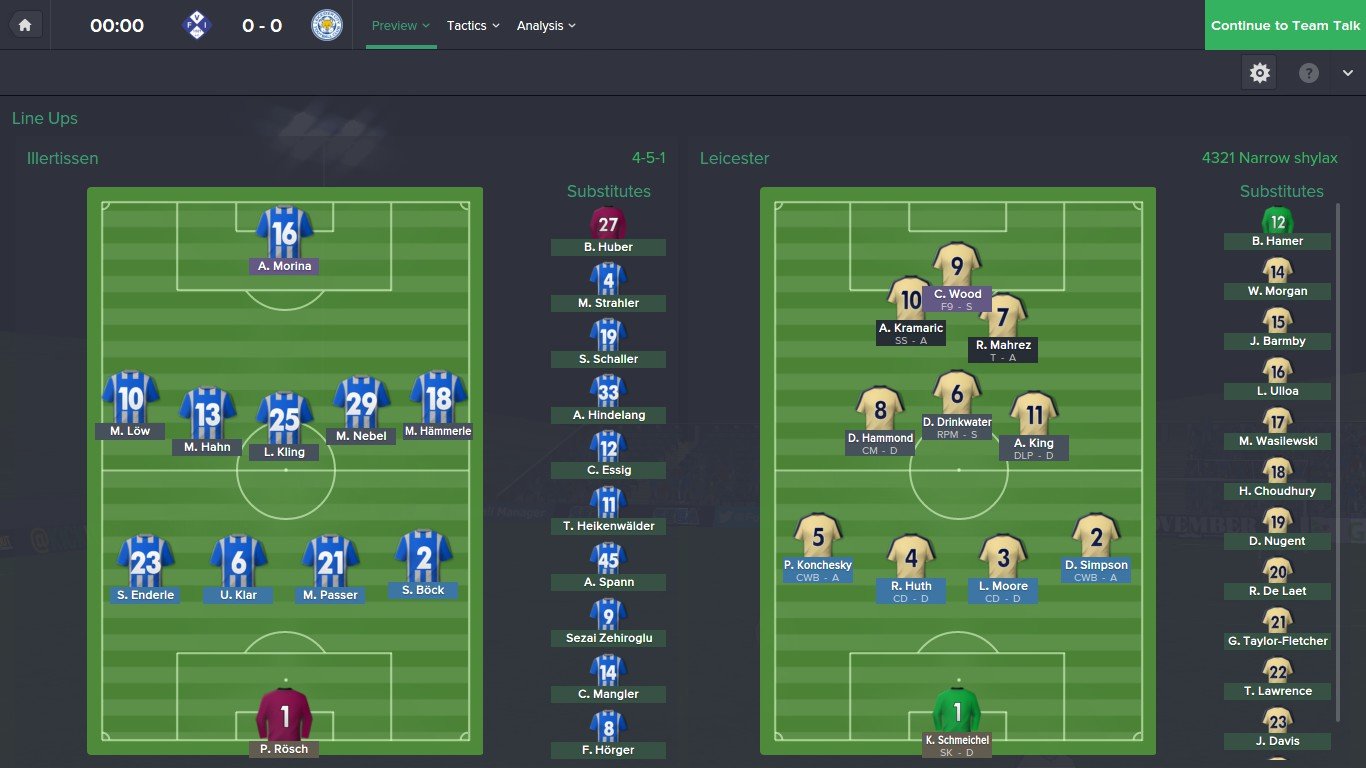 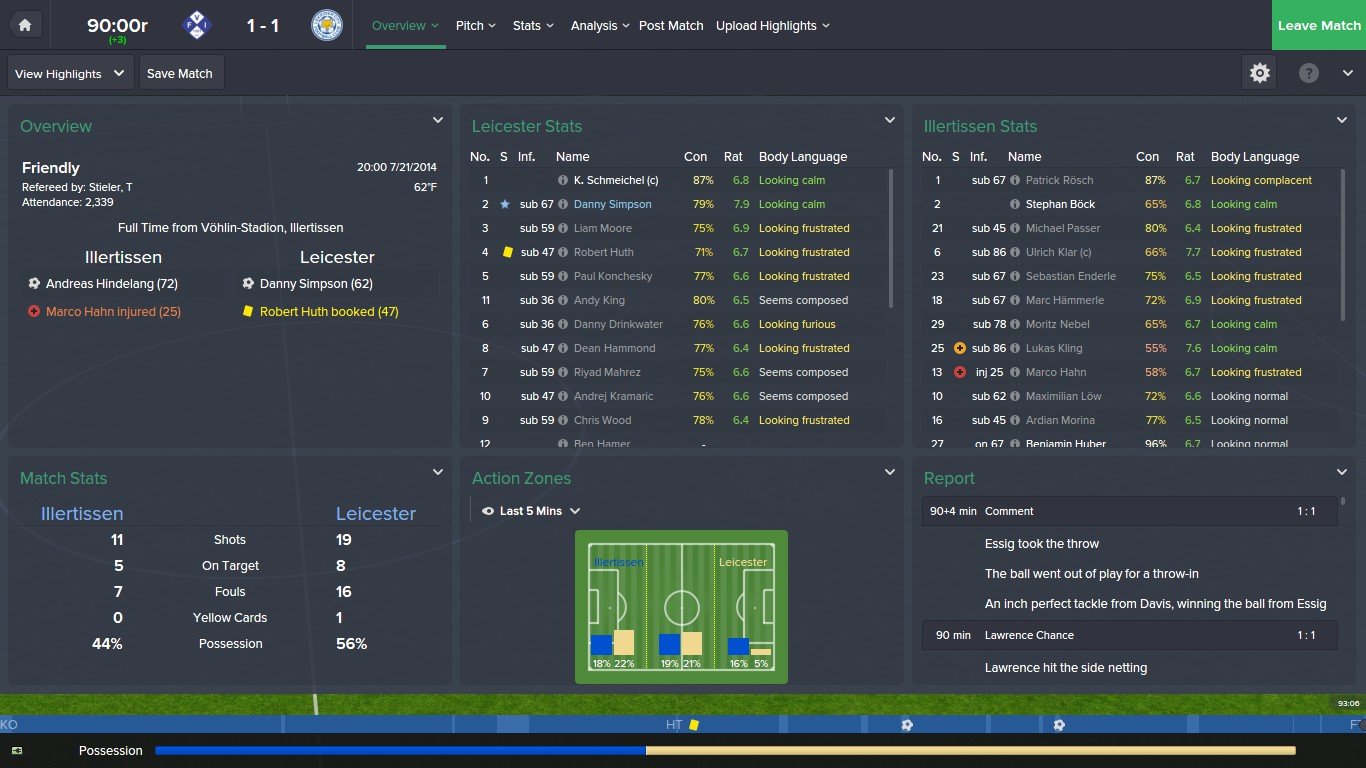 This was two days after the last match, and it showed. Danny Simpson scored on a fluke cross, and Illertissen equalized when Joe Davis missed an interception and Andreas Hindelang scored. Esteban Cambiasso got 45 minutes in his return from injury, and we had a great performance with five different goalscorers. 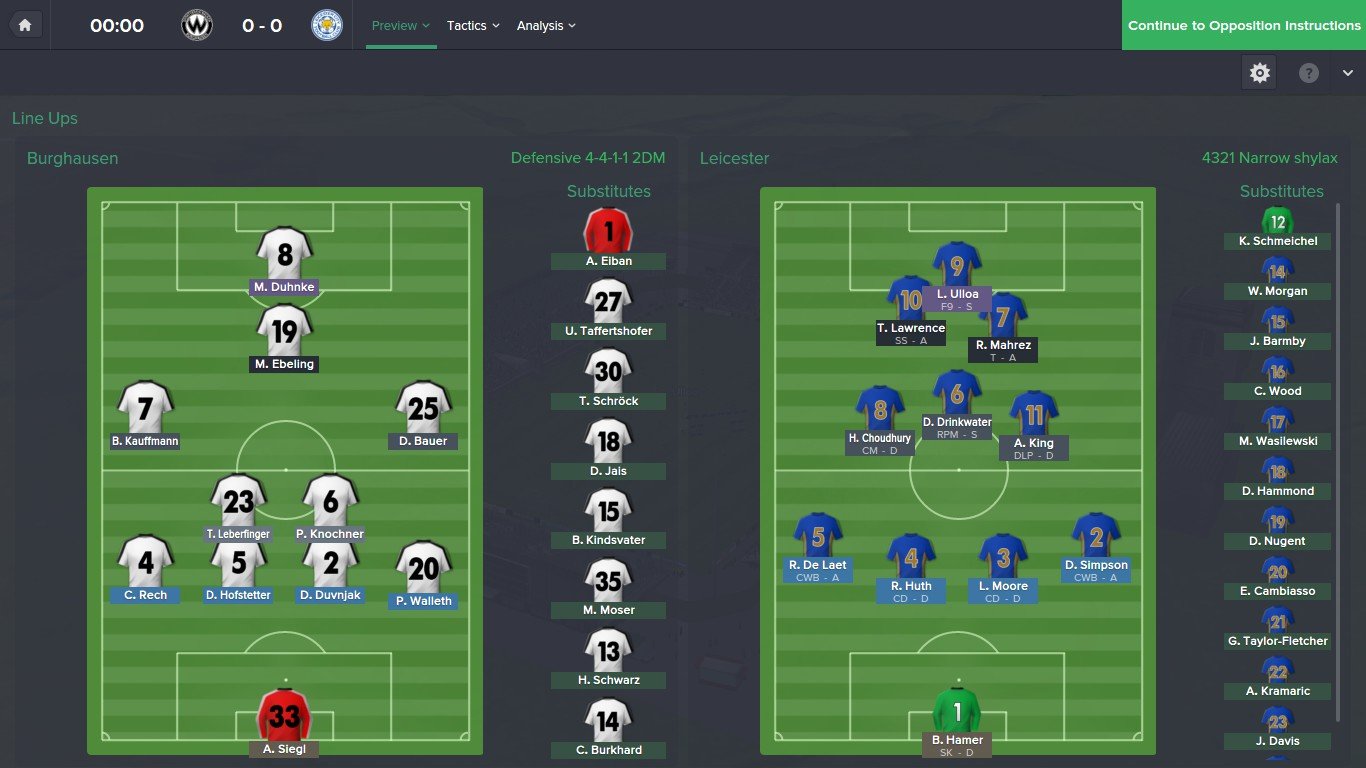 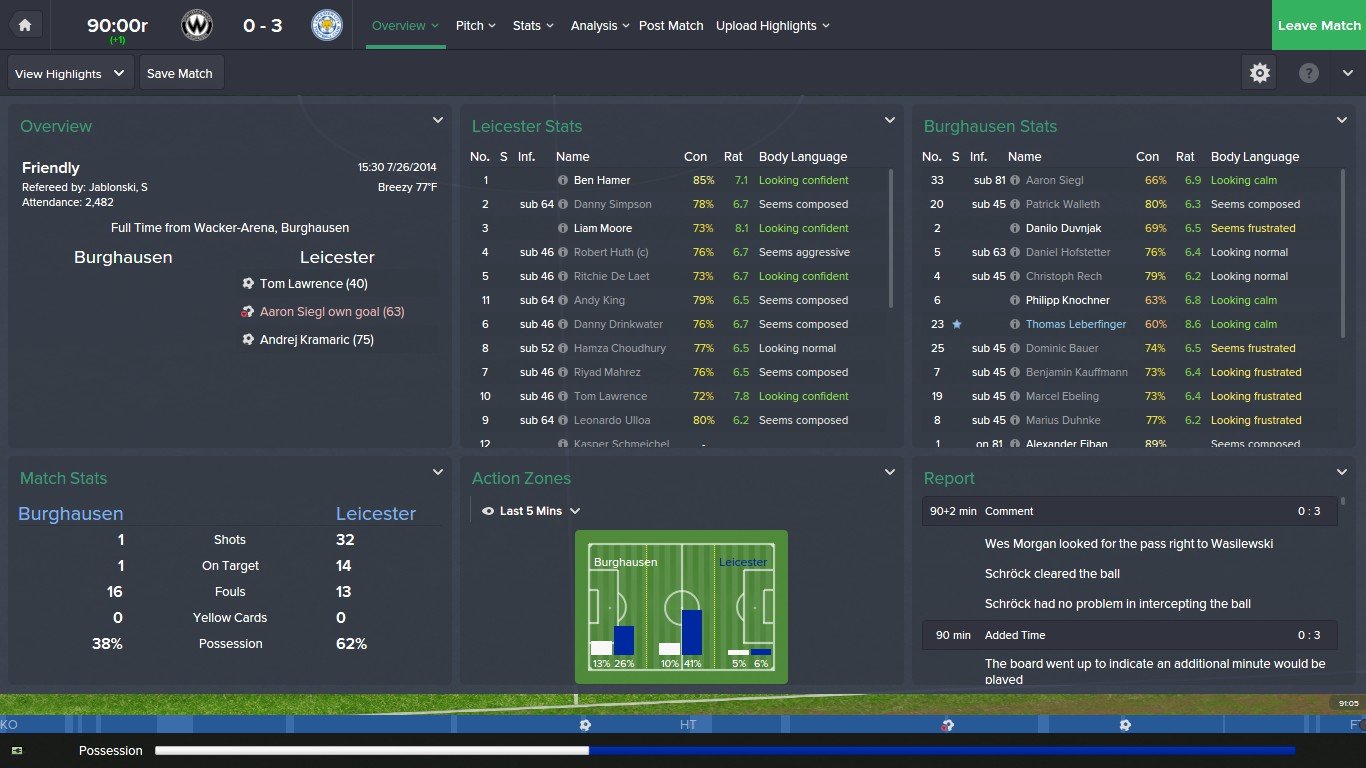 We conclude our pre-season with a solid 3-0 win over Burghausen.

None of these teams are that great, but at least we didn't lose to any of them. Still, some players like Knockaert didn't get a chance to play due to injury and I'm still looking to improve the team.
Login to Quote

In a relegation scrap, you need solid defenders, and Leicester are hoping they've picked up a bargain, as they've signed center back Stefan Strandberg from Rosenborg for only 400k pounds. The deal has 50k in potential add-ons, and a 20% of next sale clause. 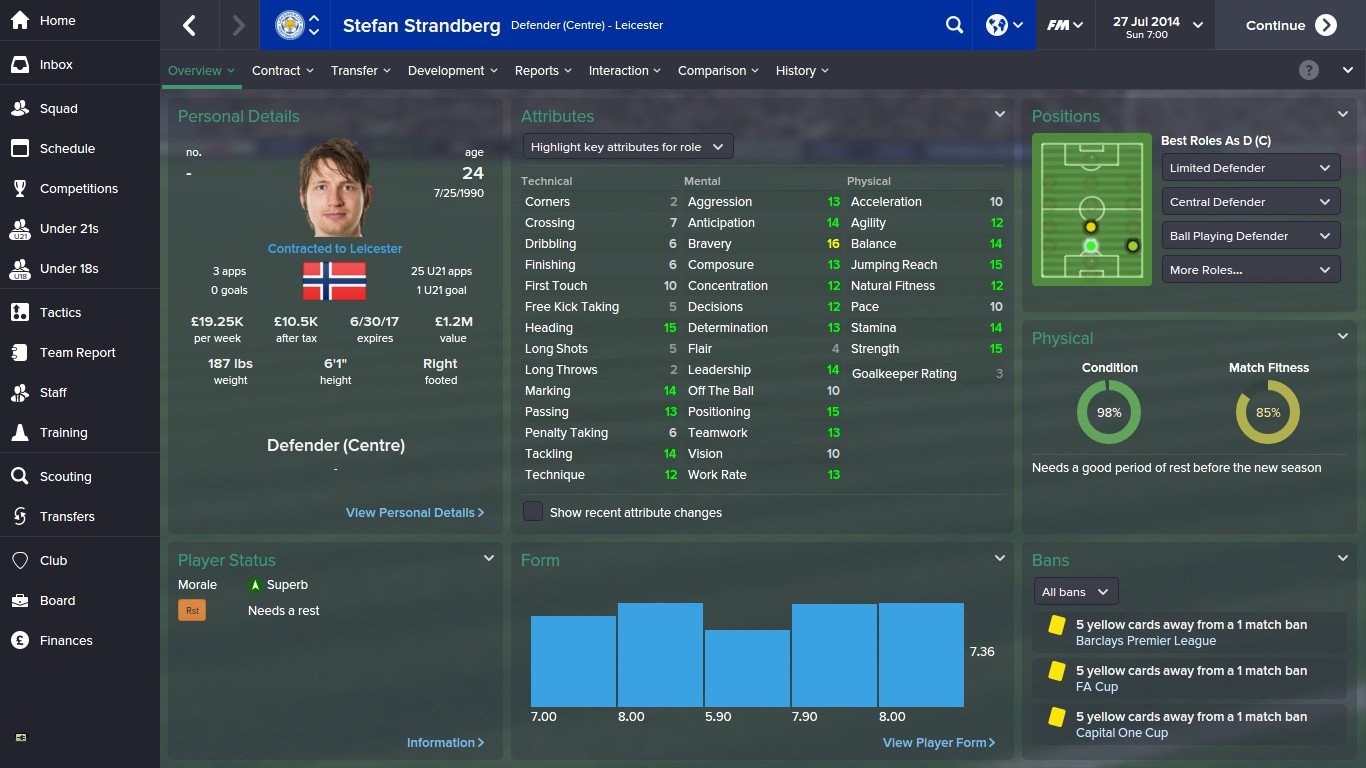 With players like Anthony Knockaert and Matty James already in the trainer's room, Esteban Cambiasso and Paul Konchesky will join them. Cambiasso strained his groin and will miss 3-4 weeks, while Konchesky tore his calf muscle and will miss 4-5 months. There are rumors that Limior will just cut bait on Konchesky and pay him out, since no one will want to take on a 33-year old Konchesky with a torn calf muscle.

UPDATE: Indeed, Leicester have paid out the remainder of Konchesky's contract, 1.4 million pounds, and given him a release from his contract.
Login to Quote

Jer
7 years
Haha, love the Medical insignia XD.. Great transfer in Strandberg, whilst it is a shame that Knockaert and Cambiasso are out for at least the start of the season. Smart move in moving Konchesky out of the club, he's utter shite
Login to Quote

Rablador
7 years
Strandberg is a really solid defender who is still young enough to grow some more. Hopefully with a few extra new players you'll have a successful season.
Login to Quote

Welshy
7 years
Strandberg looks to be a nice deal!
Login to Quote

Leicester get Garbutt on loan

Leicester have picked up Everton's promising left back Luke Garbutt on a season-long loan. Leicester manager Nathan Limior said, "I really like what he has to offer with his crossing ability and going forward, but he has to put more time in his game and learning how to defend properly, and read the game. Hopefully he can do that here while helping out with the attack." Everton manager Roberto Martinez said "I think Garbutt can be a fine player for us, he just has to develop a bit more, and playing in the Premier League will help him out, I think." Jer
7 years
Looks like a good loan, you needed that LB after Konchesky had his contract terminated. Schlupp is by no means a good full-back as his stats don't reflect his performances of late irl
Login to Quote 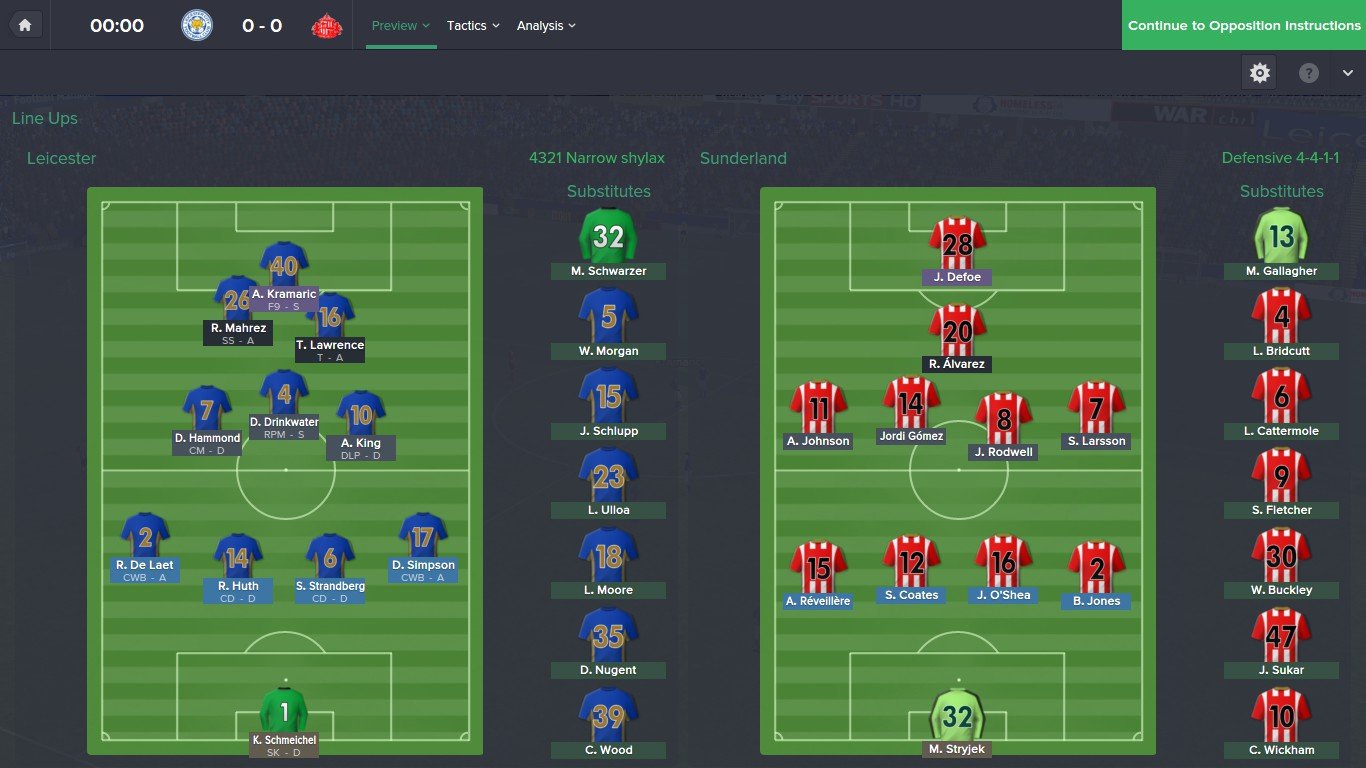 A very boring and disappointing debut, Sebastian Coates rises for and gets the header on a free kick to score the only and winning goal for Sunderland. 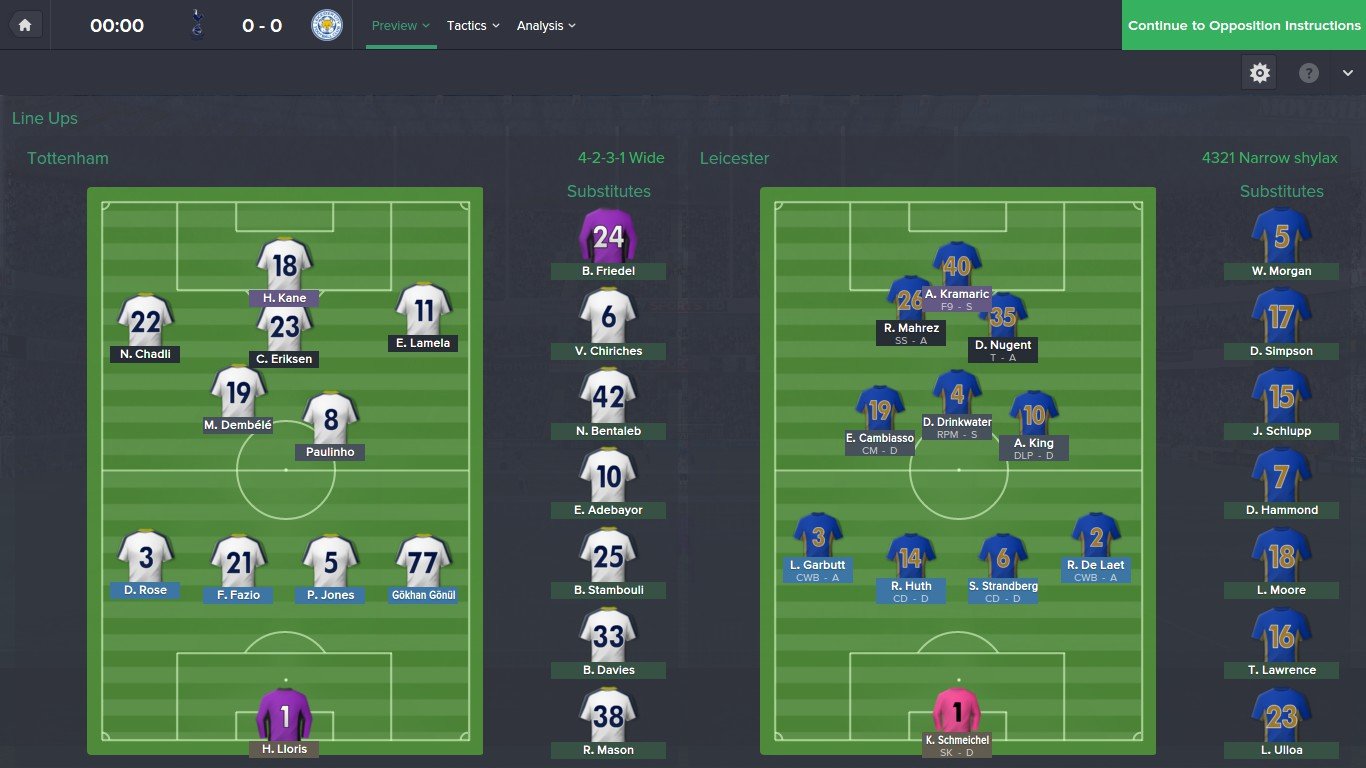 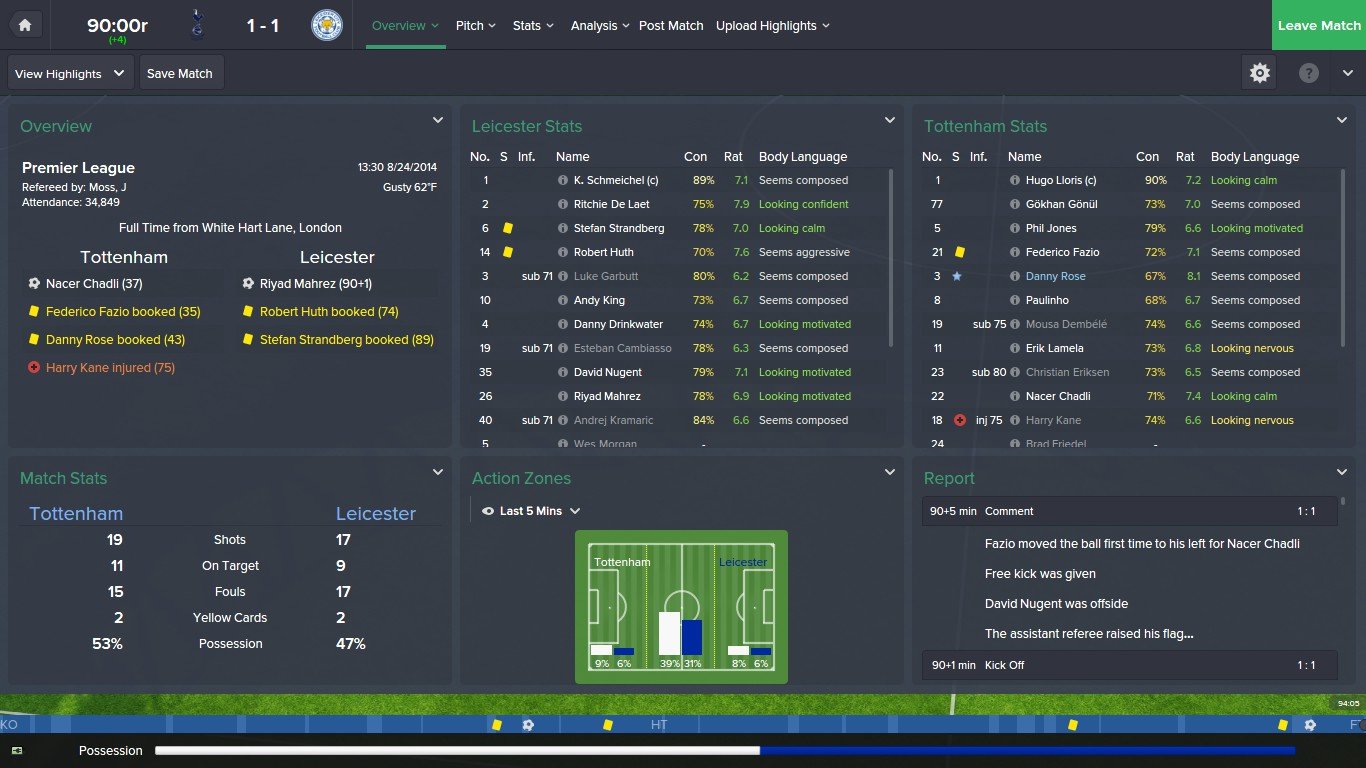 Cambiasso makes his return from injury. Kasper Schmeichel kept Leicester in it all the way, only allowing a goal when Tottenham could've had more on a different day. Mahrez was the savior, getting the equalizer and helping us nick an all-important away point, and a point no one expected us to take. 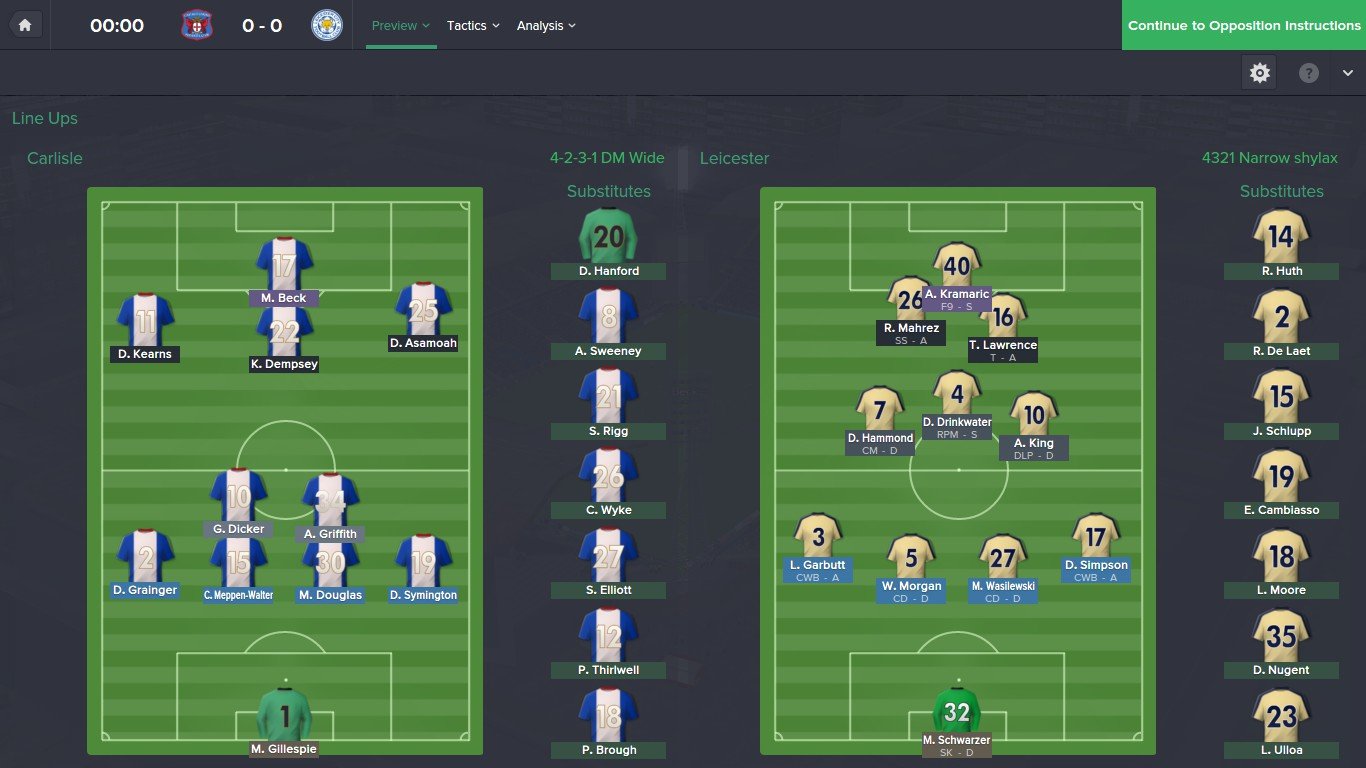 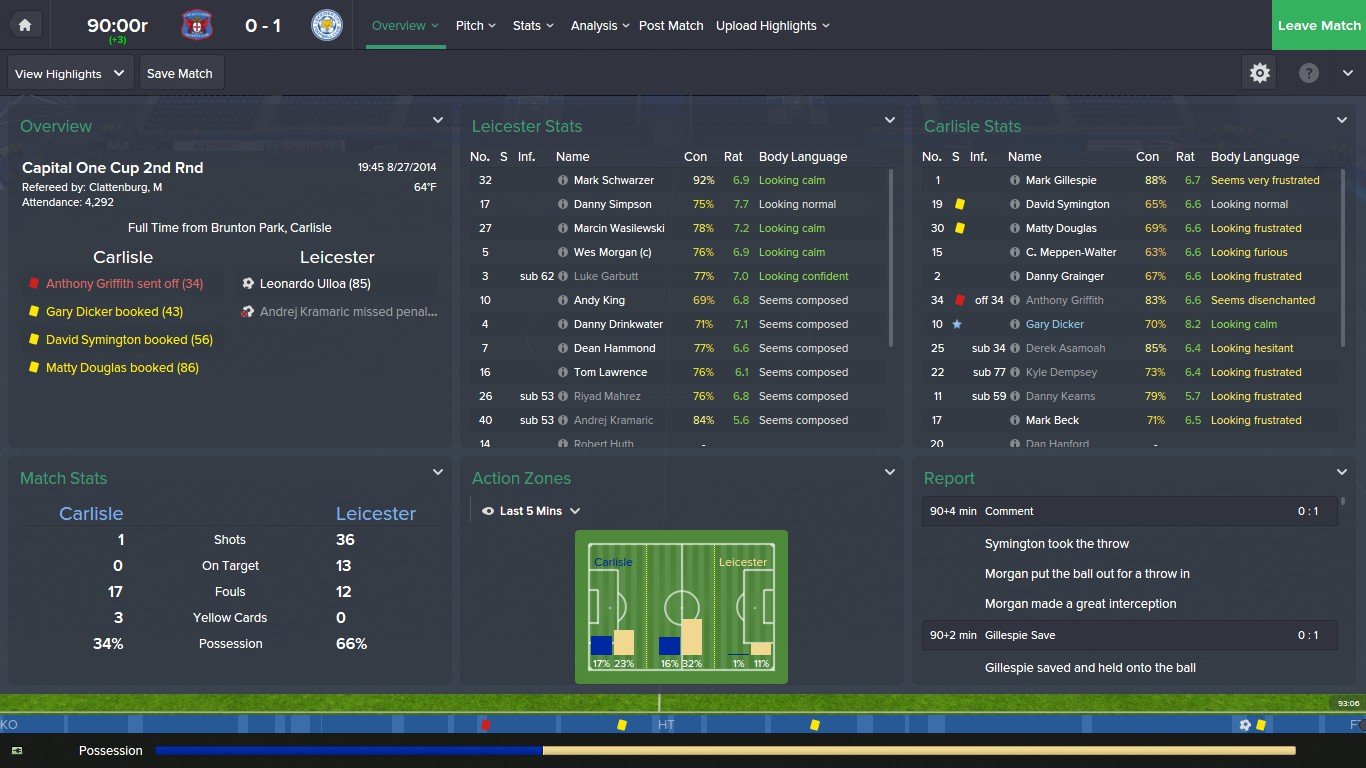 Kranjcar's confidence is shot after a missed penalty so we have to sub Ulloa on, Ulloa scores the messiest goal ever, the Carlisle goalkeeper saved Ulloa's shot, bounces off, the Carlisle defender clears it like a foot to the side, one of the worst clearances ever, and Ulloa gets to it again for the goal. We win, but it was a quagmire of a game. By the way, if Carlisle's manager is going to call out my backup goalkeeper for being a weak link, you could at least try not to let him stand on his head all game, yeah? 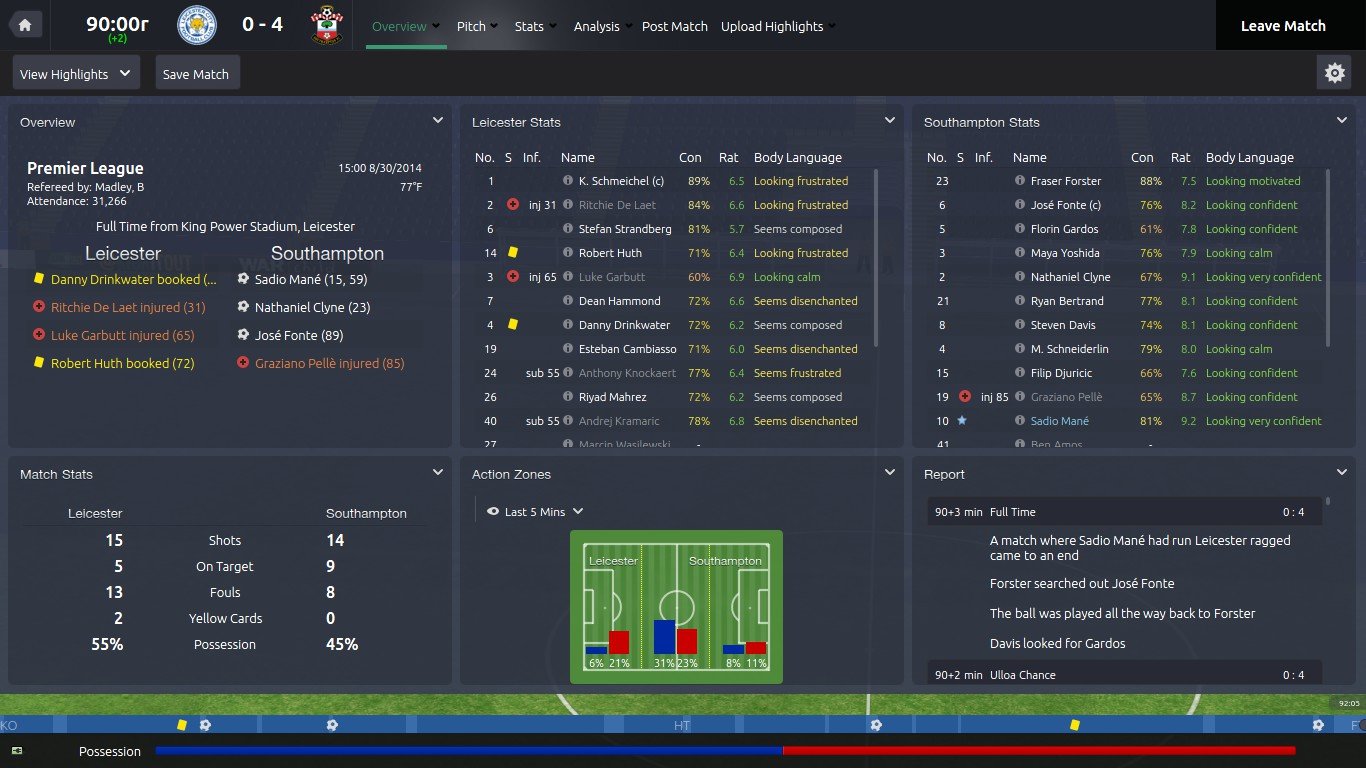 We were just overmatched on this day as Sadio Mane was the star of the show, picking up two goals. Ritchie de Laet and Luke Garbutt came off with injuries. de Laet will miss 2 weeks with a strained neck. 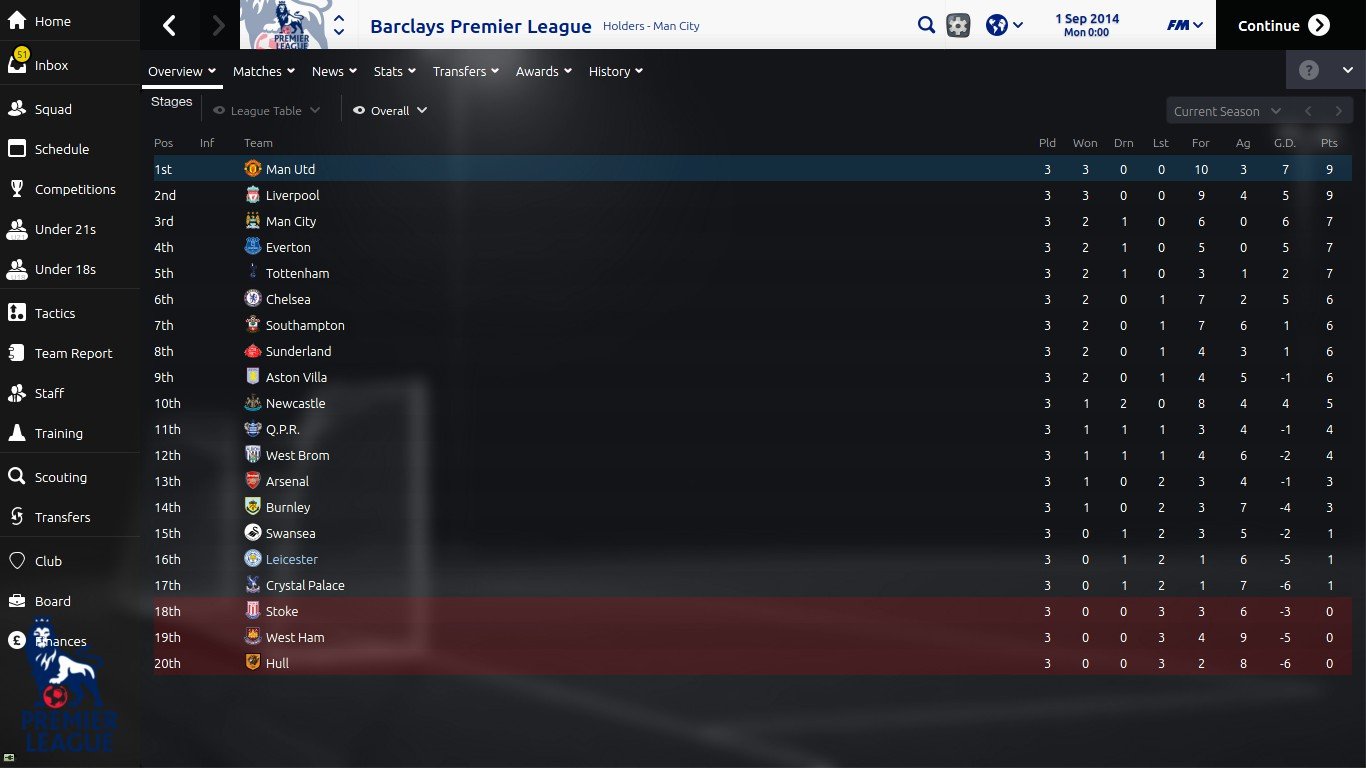 One point...that won't do! We'll have to improve. I still haven't found many good attainable targets yet, so I might have to roll with what I got.
Login to Quote