Nastymiller
4 years
Oh I am Jer!

Well those 97 days went quick, no money given to me, not one player brought in. The chairman made no changes to the staff, basically I was used as a pawn to sack their previous manager.

So it's really not worth looking at the previous few months.

Job number 4 upcoming - where will I go? I doubt England will give me another opportunity for a while, so it's France, Spain, Italy or Germany....I do fancy giving the German league a blast.

Let's hope so, a month and a half later and my next job was soon upon me and a club in the Vanarama North. Sitting 16 points above the drop zone and with 10 games to go, even my shite managerial record should see the club safe.

11 points away from a play off place, I think it's a case of grinding the season out and hoping I get a half decent youth intake.

The club has a couple of quid to spend on wages, they have Wolves as parent club, the chairman wants to invest in the backroom staff, they have paid for my next coaching badge.

Everything seems positive! Am I going mad?
Login to Quote

Nastymiller
4 years
Sorry about this guys, but I may have to quit this save as I 'think' there is something wrong with it. First game in charge lost 5-0!!!! I don't mind not winning all the time, but this is honestly the first time I have played any of the FM games and had such a run of results.

What you all think, carry on or call it a day?
Login to Quote

Stam
4 years
Have you considered altering your tactic or trying out someone else's? Perhaps you could look into Jamie's FM15 tactic that he's been using throughout his Twitch series with Whitehawk and Waterloo with brilliant results.

I think you should carry on and keep trying to turn things around.
Login to Quote

Jer
4 years
It's common for players not to adapt if they had no pre-season whatsoever. You can keep them up though! At least give Stam's suggestion a try as he never comments on stories!
Login to Quote

Nastymiller
4 years
Stam, thanks for the feedback and I will give that tactic a blast with my next save, until then....I am going to battle on. Jer, I am hoping that with a full pre-season and a decent youth intake I will have a squad I can start to build...

So a lot has started since I took over the club, at first I thought "Oh feck!" as I watched my new team get smashed 5-0 away from home, but 3 wins a draw and a defeat left me think "Hmmmm" A 50% win record is not too shabby after 6 games and is certainly much better than my previous clubs.

The chairman has backed me totally since taking over, bringing in 4 back room faces as I stated I needed help. Coach, U21s Manager, Director of Football and a scout are all bought into my 4-4-2 old school football style of football.

The youth intake was not great, but a few gems are in the 'muck' 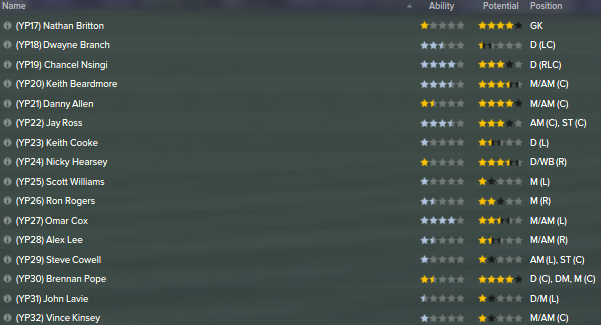 Brendon Pope looks the best of the bunch with the potential of playing a league higher and a good player now for most clubs at our level. I will be expecting him to develop well during next season and may well look at getting him out on loan for the full season. That said, if I lose a couple of midfield players during my end of season clear out I may well stick him in my first team squad and give him game time.

A mixture of results starting with a thumping defeat, and a really tough finish to the season lay ahead.

All 4 of the final games are against teams above us, so just 1 victory I will take as a positive. 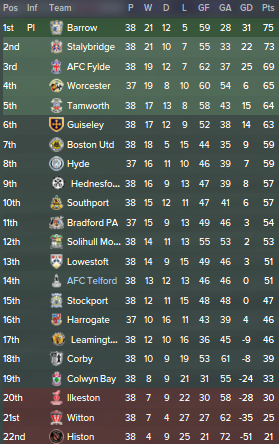 Jer
4 years
You've done okay so far.. Didn't get relegated or sacked though, must be a good feeling

But I finished the season off with 4 straight defeats, going to give the new season a month or so, and if nothing changes then it's time to call this a day and start a new save off.

Fingers crossed whatever 'bug' is going off it changes with the season change.

Not great fun getting smashed all the time.
Login to Quote

Jer
4 years
I understand and for the sake of this story (I enjoy it :P), I wish you the best of luck

Nastymiller
4 years
For my sanity I have had to end this.

Start of the season 1 draw and 3 wins, sky high morale and everything.

Time for a new save.
Login to Quote

You are reading "Rags to Riches".