shylax
6 years
Hello again, I ended up stopping the FC Nashville story after one season because it got boring for me, although it was an interesting concept, the mod pumped way too much money into the clubs and it got absurd. I quickly decided that I wanted to either do a save in the Netherlands or Italy, and I ended up picking the Netherlands due to its foreigner rules. I also struggled over whether to pick Telstar or Almere City (NEC was also a popular recommendation, but I didn't really want to pick a team that was a frontrunner.)

I decided on Almere City, even though Telstar would've fit in more with the tactic I wanted to use. I liked Almere City's colors and logo better, and Almere City has an interesting story. Almere is the newest city in the Netherlands, and Almere City, the club, is a baby in terms of European football, aged only 13 years in 2014 when the save starts. It was borne out of Almere wanting to be prominent in sports, and the club used to be called Omniworld, although it thankfully got changed to Almere City a few years back.
Login to Quote

Once again, I will be taking the role of American managerial prodigy Nathan Limior, simply because it's most convenient for me. I will be making it play into this story, as well.

How (do I want to accomplish it?):
5. Run Almere City in a sustainable and forward-thinking manner. This means being financially responsible and running at a profit every year, at least in the transfer market, if not other areas of the club.
6. Play attacking, fluid, pressing, possessing soccer. (Details in the Tactics section.)
7. Look for undervalued and young players who can remain viable for as long as possible.
8. Enhance the youth and training facilities and produce as many viable Almere City youth intake players as possible.
9. Everyone is allowed at least one vanity project, and I will try to import and integrate as many American players into the first team as possible.
10. In order to keep the books looking good, setting up friendlies against big teams and selling players is a must.
11. I must be prepared to immediately find a replacement if I have to sell a player.
12. I must keep the wage budget as low as possible, while minding the other objectives. My goal with this tactic is to play incredibly progressive, attacking, fluid, soccer while keeping the back as tight as possible. The players are spaced as evenly as possible, so players will always have outlets. Space will be created and exploited with movement, and passing will be largely short, although playmakers have license to pass long and direct if they see an opening. There will be no out-and-out striker.

Yes, I realize this is incredibly ambitious for Almere City, but I want to get my style of play instilled as early as possible, and I hate packing it in.

Transfers and Other Players to Look For 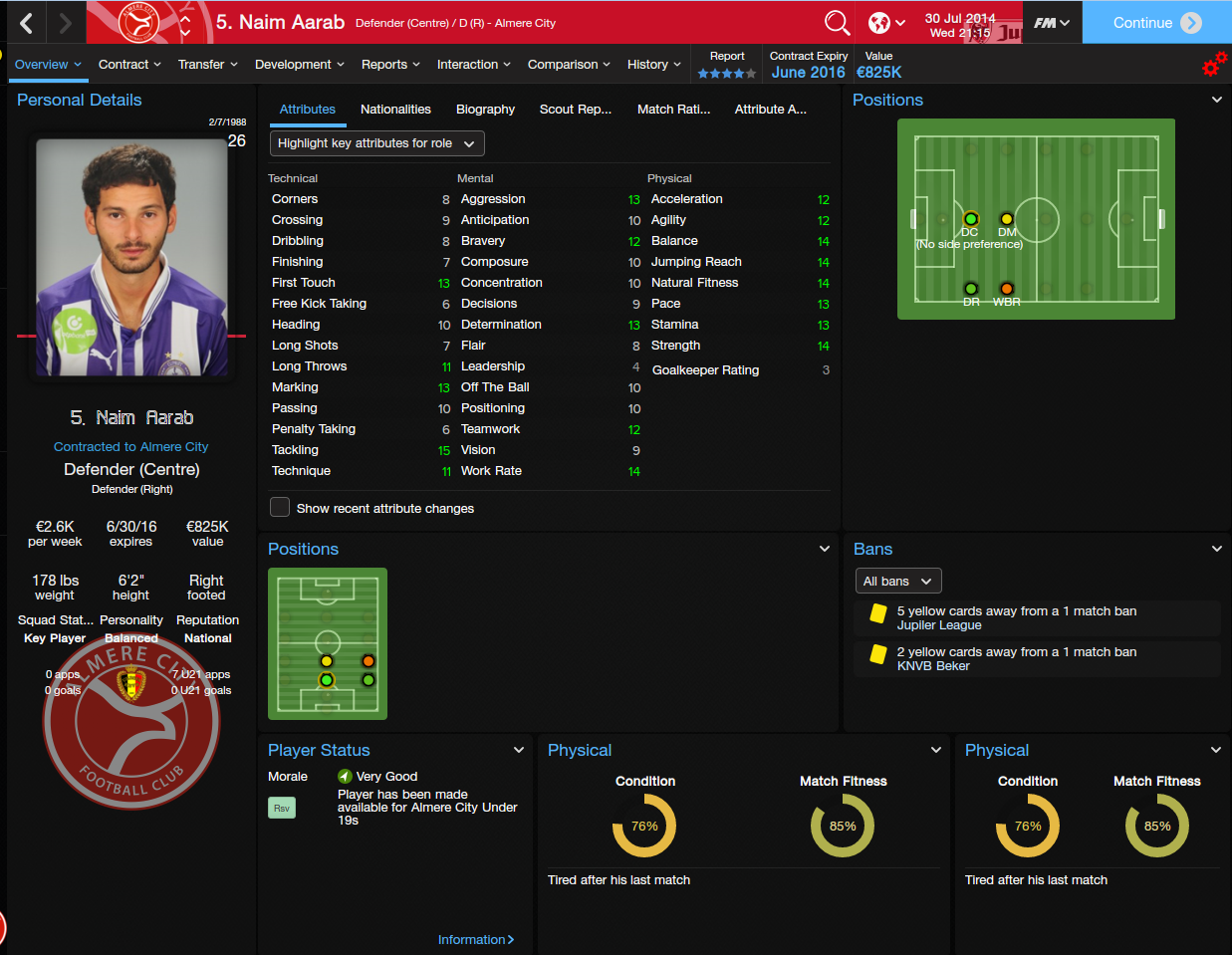 The Belgian center back is incredibly physical and has the pace to make up for being caught out of position, but is big and strong enough to stop clubs who play direct. I needed another deep lying playmaker and Gigli was cheap and looked decent enough. Can either play box to box or shadow striker, will be a good fit for us and I needed AMC depth. He has a big weakness that his off the ball is terrible, and his finishing is crap, but he is very versatile and can play any attacking midfielder, and will be re-trained to play M (C) as well.


Out:
Xavier Netteb, M (C), contract terminated
Vincent Janssen, ST (C), to NEC, 1M
- Wasn't tipped to play much, played a position I didn't have any use for, and could get me some money. Why not?
Khalid Tadmine, free transfer, to Willem II (was on amateur contract) Yes, it's the Southampton manager's son. He has been given first team duties in pre-season and has performed very well, he helped hold swiss club Sion to a draw in our first match. Other teams were sniffing around and I had to sign him to a real contract to keep him around.

Went undefeated in preseason, which is great, but as always league fixtures are a completely different monster.
Login to Quote

Walter
6 years
Interesting choice of team and nice start to your career in Almere City. The tactic is bold but hopefully it will produce results. It certainly has in preseason.
1
Login to Quote

shylax
6 years
@Walter: I am nothing if not bold. I think it will work out, though.

@Jasper: I always like to break the monotony of Premier League/English stories. I've only tried the Netherlands once before and I failed out of it with Excelsior and I think I can do better this time,.
Login to Quote

bebero
6 years
A very bold tactic, even I am curious how to go!
Good luck!
Login to Quote

Zed
6 years
Like Jasper said, it's great to have a Dutch Jupiler League story on here. Will be following this closely! If you want the names of some Dutch talents, ask me

Jer
6 years
This tactic will get you scoring tons of goals, and conceding a lot of them if you're not careful enough! Best of luck, Shylax!
Login to Quote

shylax
6 years
Zed, I don't like metagaming, but thank you for the offer. It's hard to not keep names of talents out of your head accumulated over numerous saves, but I like to do all my scouting in-game.
Login to Quote It seemed as though Almere City would get off the mark with a win, as Lars Nieuwpoort was incredibly creative and set up two early Almere City goals, the first where he crossed it to Enzio Boldewijn who somehow got the ball and scored the easy goal. However, our fitness wasn't perfect and we faded late, only getting a draw and a point. Jason Oost twisted his ankle and will miss 6-7 weeks. This one was really surprising for me, as we were down 1-0 at halftime, but an own goal in the second half equalized it, and we looked to be in trouble when an injury forced us to play with 10 men and no defensive midfielder, but somehow we got a goal from Norair Mamedov to make it 2-1 and even though we had it sealed a penalty at the death to make it 3-1. 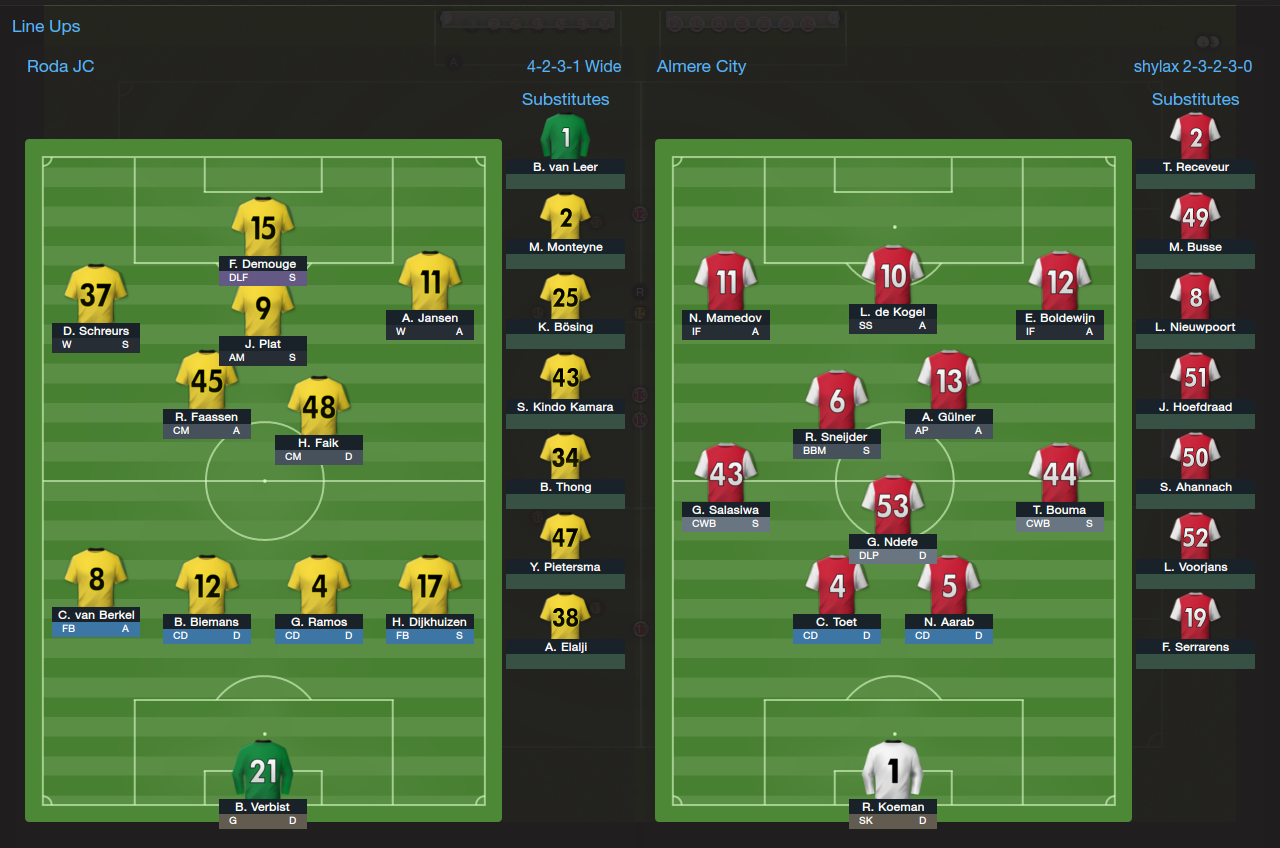 This was tough since it was so soon after the Eindhoven match. We struggled to deal with Roda's attack, it looked like we would steal a draw with Cees Toet's goal, but Kai Boesing's goal ended up giving us our first loss of the season. Cees Toet made a crucial mistake which allowed Donny de Groot to go clean through on goal, round the keeper, and score the only goal of the match. Gulner scored a great free kick from 20 yards out, and Nieuwpoort drew a penalty to give us a 2-0 lead. They pulled to within one on a quick counterattack and Koeman out of position, but we held firm for the win. Toet would normally be a great center back, but this system requires quick center backs and he is too slow for this system. We struggled to get going early, and Florian Jozefzoon caught a rebound and scored to put us behind. However, things started to change when Rodney Sneijder came on, and Jong PSV kept giving him free kick after free kick in dangerous spots, and on the third free kick highlight he scored the equalizer.

10th place so far, although for a team of our means that's not a bad place to be. I have some things I still need to work on, I need to find another defensive midfielder to rotate in, I've been patchworking other players into the rotation. The players are still learning the tactic, and there are some players, like Cees Toet, that don't fit the tactic, but the first season always has these issues. I'm surprised that we haven't conceded more goals, honestly.
Login to Quote

Jer
6 years
Damn, not the best month.. But it wasn't the worst either

Nothing major happened, but we did make one signing, albeit a free transfer, another defensive midfielder, Rogier Meijer: He is a bit slow but shouldn't be caught out of position too much and if he is he has two center backs behind him to clean things up. 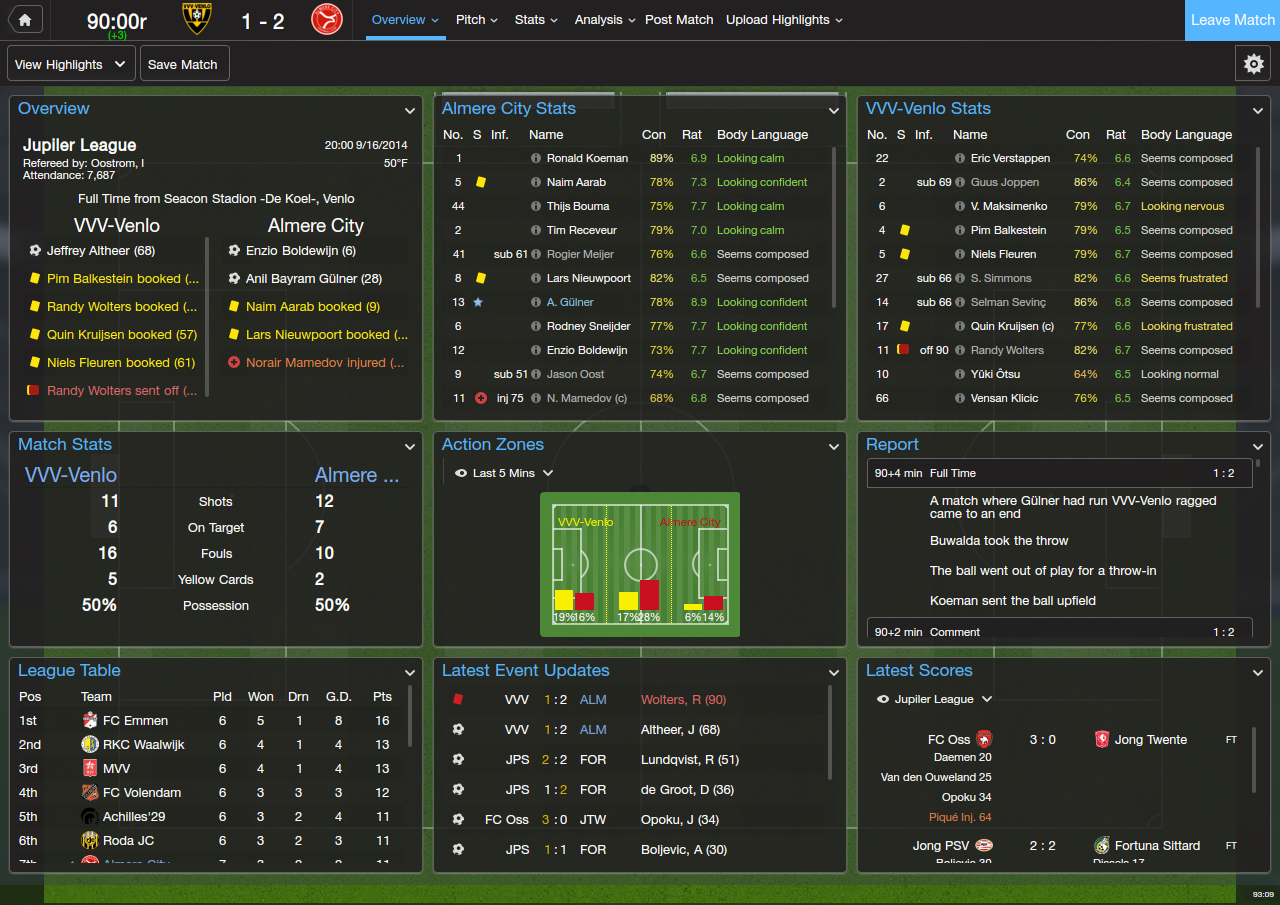 Gulner had a great game for us, leading a counterattack and setting up a cross to Enzio Boldewijn for a goal in the 8th minute and the early lead. He also made a brilliant move to skin Venlo's defender, Pim Balkestein, on the way to scoring a great individual effort. His presence was a bit lost when I had to put him in a deeper position to replace Rogier Meijer, who was gassed, and Jeffrey Altheer scored a great free kick to put our lead in danger, but we held on for the win. 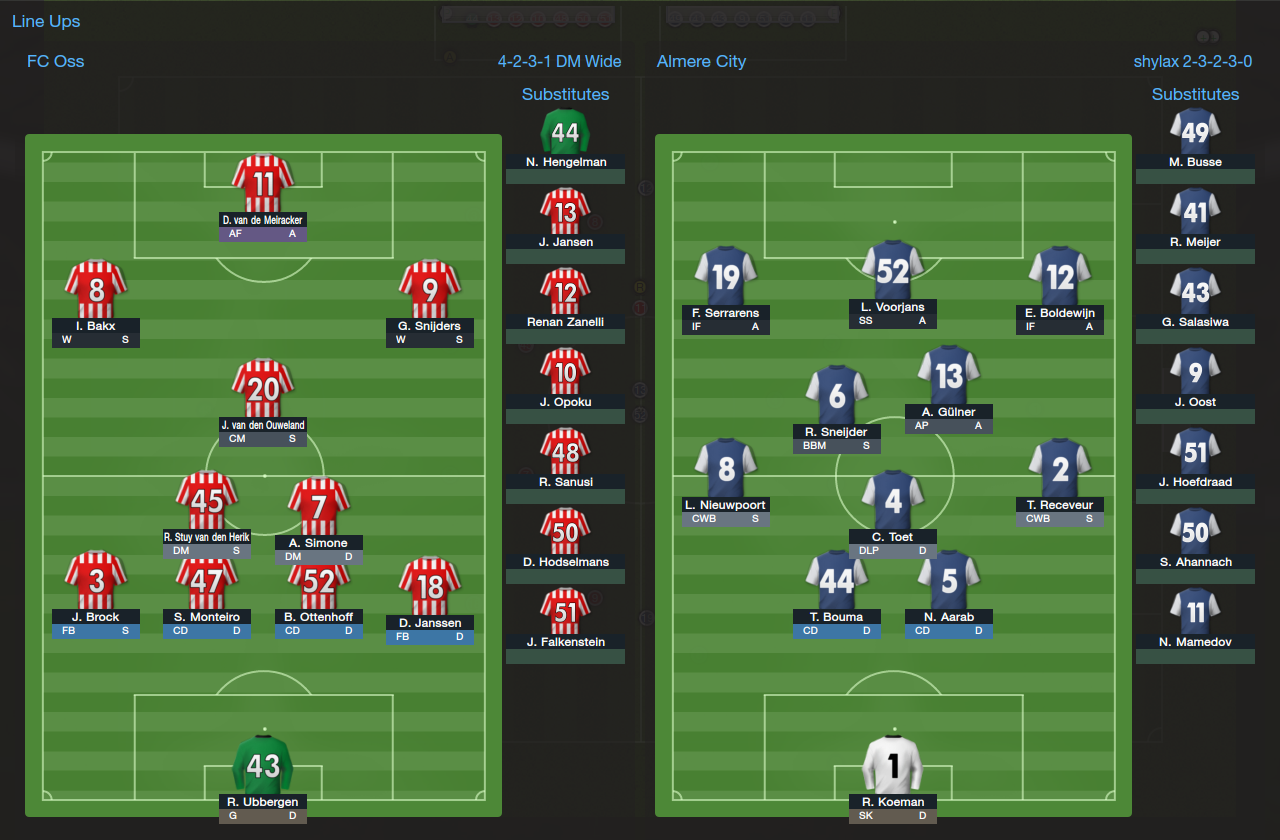 Enzio Boldewijn scored another early goal, but Naim Aarab made some uncharacteristic mistakes and we fell behind 2-1. Fabian Serrarens scored the equalizer to salvage a draw. I am trying out Cees Toet at deep-lying playmaker because Gigli Ndefe is injured and I needed to rotate Meijer. 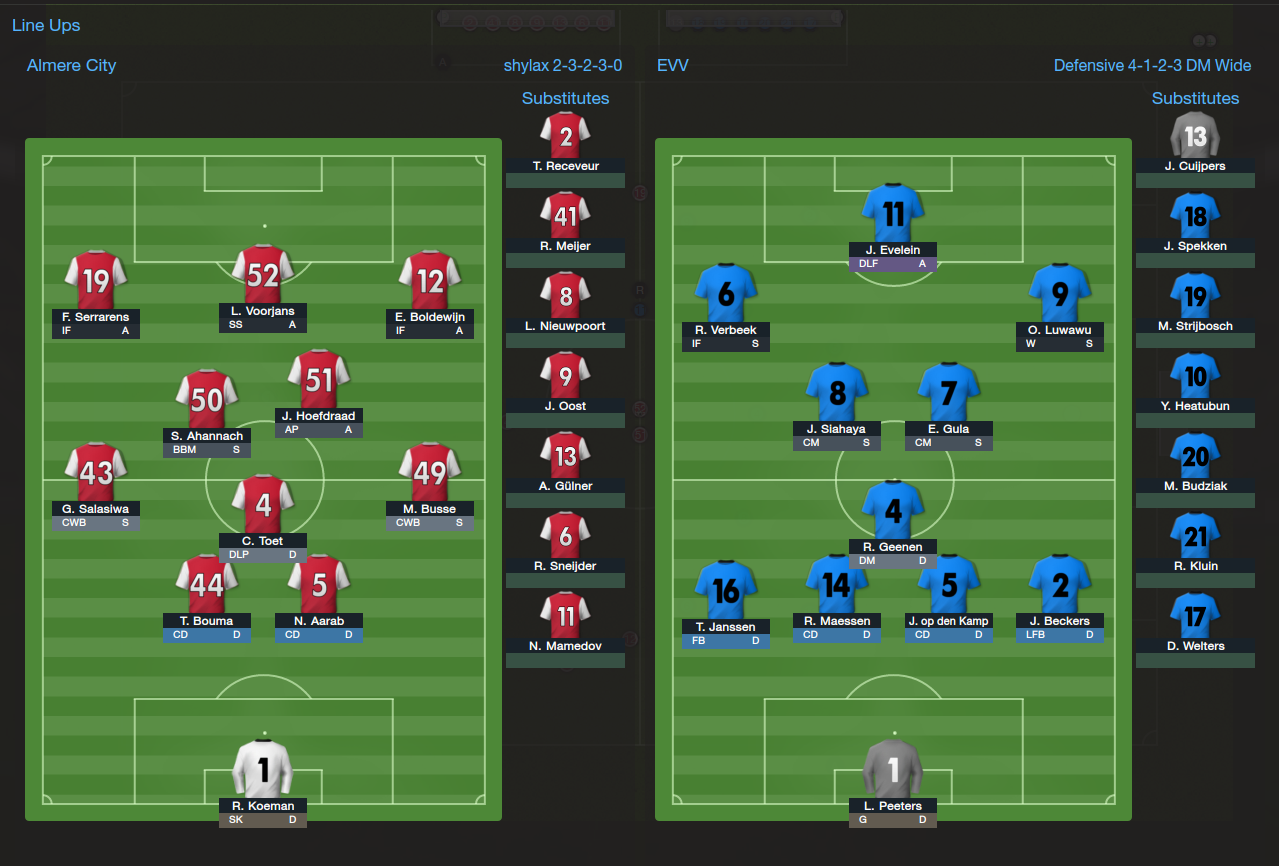 Due to EVV being a smaller opponent and wanting to keep top players fit for the next league match, I largely played a second string team. EVV rarely threatened, we kept a high rate of possession, and Enzio Boldewijn scored the only goal to allow us to advance and face ADO Den Haag in the third round of the tournament.

- RKC Waalwijk won the first period and have clinched a playoff berth. I can feel JasperCillessenAjacied wanting me to lose here, but honestly, I want to beat the tar out of Jong Ajax, because they're the reason Ajax is being such a shitty parent club to me. Sam Hendriks took the lead for Jong Ajax with a nice finish from close-range, but Naim Aarab scored his first goal for us off a corner kick, and it ended stalemated at 1-1. We're 8th, which is great considering the board directive is "be competitive". Once we get players to return to fitness, we will be even better. We've only lost twice so far, which has really surprised me.
Login to Quote