Thanks mate, Yeah Luke is definitely one to watch. Fair to say I wont be spending a lot of money on the fullback position 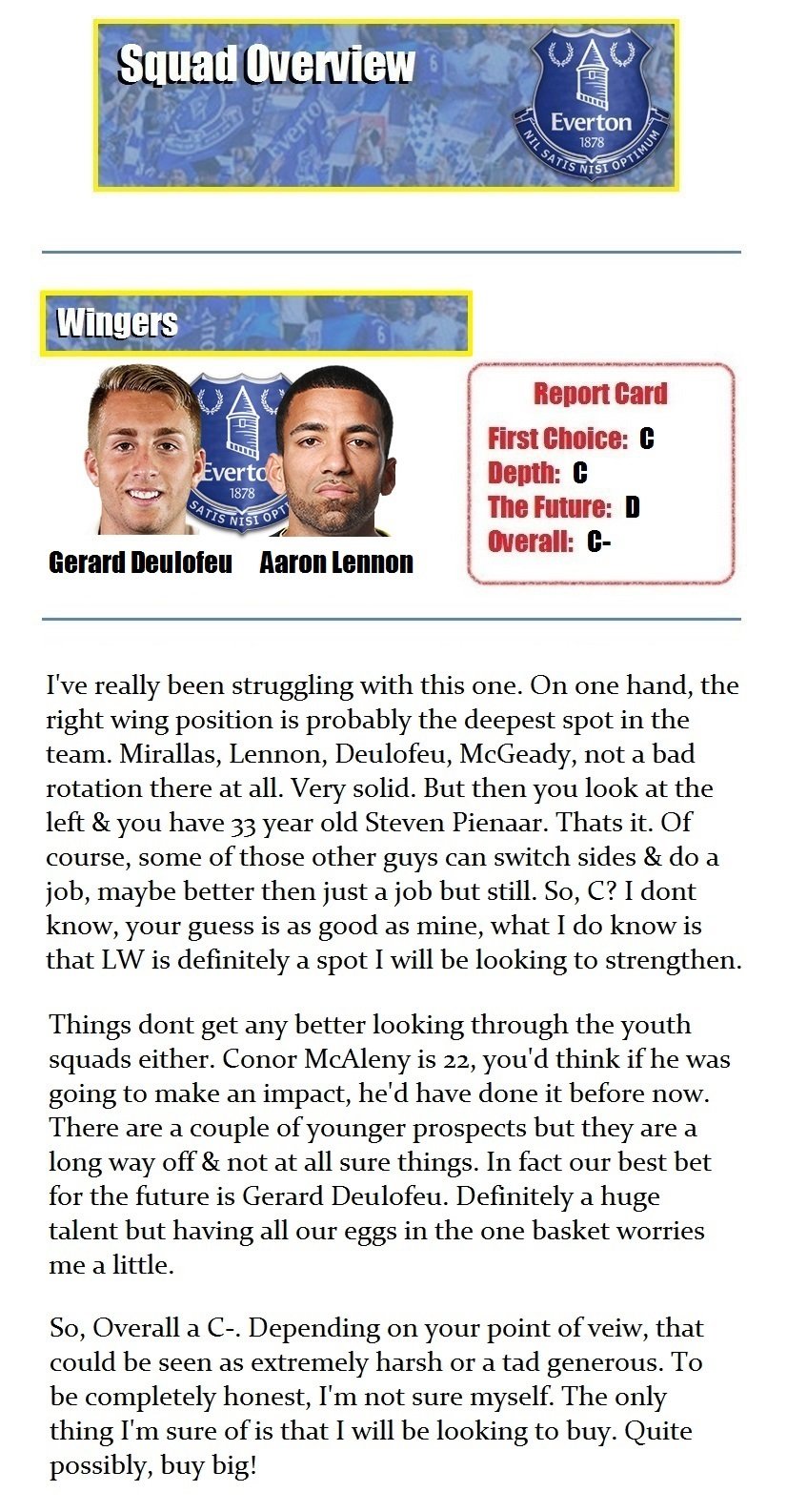 C.J.Lippo
6 years
Hey all, sorry for the false post but I have been made aware of an issue whereby younger readers may not be able to see my posts because they are exclusively done as an edited image & uploaded through Imgur, which can be blocked by parental controls.

Just wondering how many people this is affecting & whether I should change my image hosting service?

Would that even make a difference?

Should I just use the on-site system to post?

The reason I do everything as one giant image is because I don't have a lot of free time & I can just do a little at a time, save & upload it, come back to it later (even at work) & when finished post in a split second. Rather then having to do it all at once. Also, once I get used to posting here, I will be able to do things I cant using the on-site system.

Its all for naught though if people cant see it, so please let me know.

Thanks Chris.
Login to Quote

Live For FM
6 years
I must say liverpool does not SUCKS. They have had a bad time recently, but I believe that Klopp will turn it around. Anyway a good start to the story, good luck and will be following.

P.S. the idea of edited image is fine with me
1
Login to Quote

P.S. the idea of edited image is fine with me

Cheers mate, thanks for the feedback.

Personally I think the jury is still out on Klopp, he's a likable kind of guy but I think he will have to be incredibly shrewd in January if he is going to turn that side into top 4 contenders. Not impossible but we'll see.

As far as the images are concerned I'm kind of stuck, tried Photobucket as it was thought they wouldn't be caught by PC but the different formatting makes the images too small. Unless someone else has any idea's may just have to battle on as is 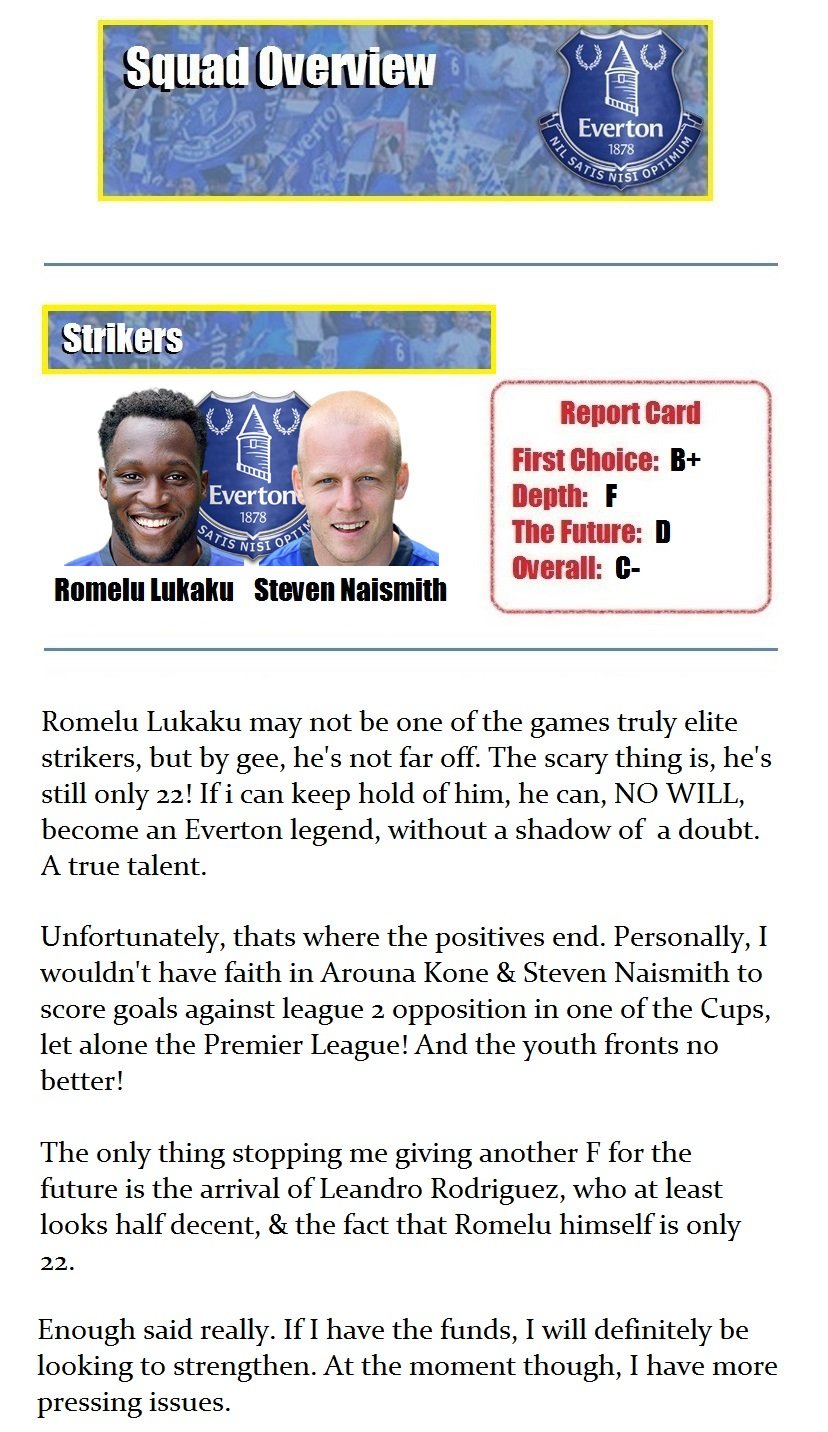 Louis O.
6 years
If you want to do a little at a time you can just save as a word doc each time you edit it a little, and then just post the fun little pictures onto imgur.
Login to Quote 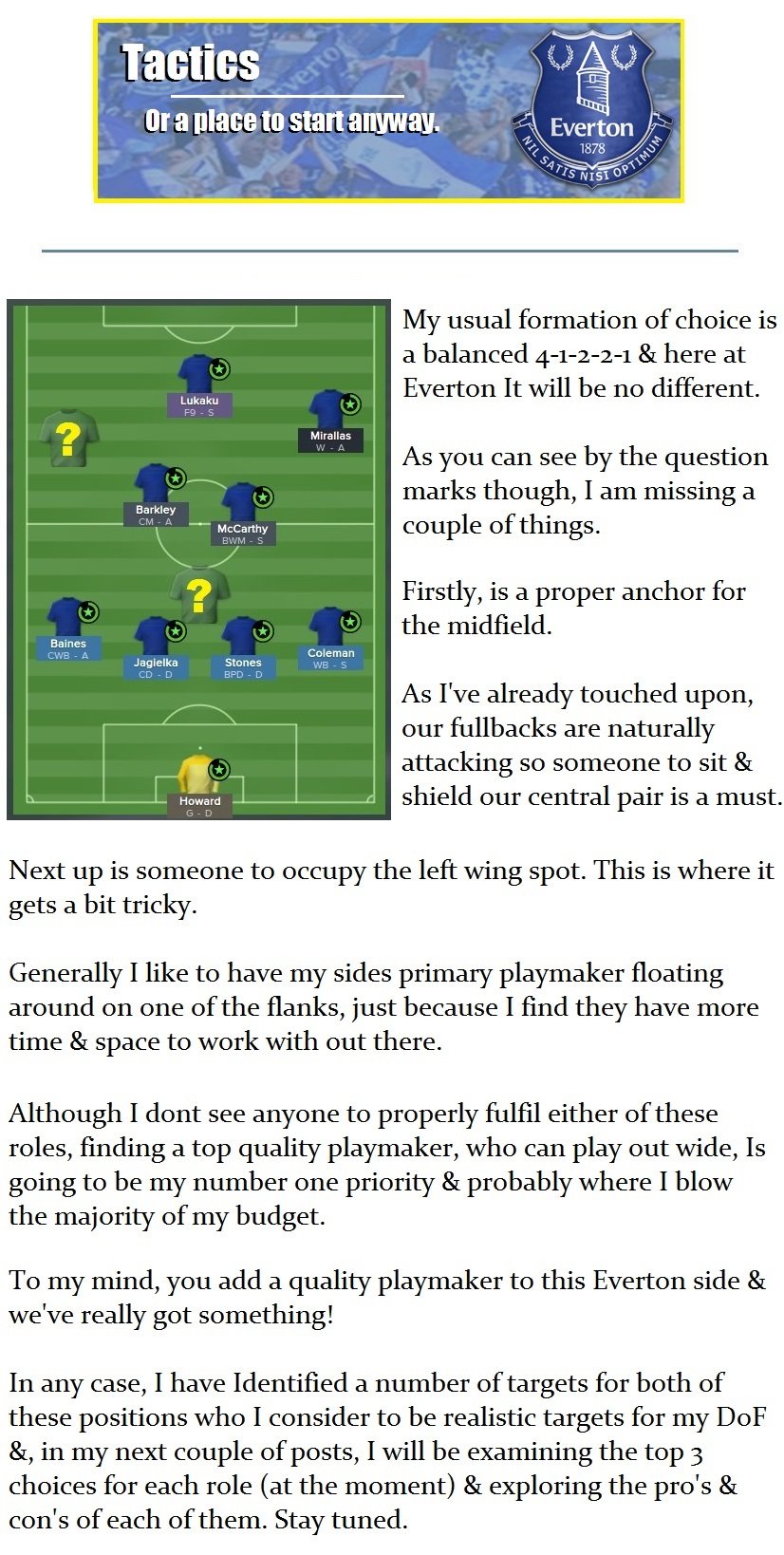 Yeah mate, that's what I might end up having to do. Thanks for the advice

Hellsdoom
6 years
A nice, promissing squad you got there. I will be following this with interest.
1
Login to Quote

Cheers mate, thanks for the support. Much appreciated.

Everton are one of those clubs that always seem to produce the goods on the youth front. Its just the small matter of getting the funds to build around the promise. If we can get that, the Red half of Merseyside will be shaking!

TheDangerZone23
6 years
I like it so far, I think you undersold the Central defence a little, starting England centre back in Jagielka as well as Stones and Holgate who both have massive potential. Looking forward to seeing who you look at for midfield anchor, William Carvalho could be a boss, but it depends how much they want for him, good read though.
1
Login to Quote

You are reading "LIVERPOOL SUCKS! An Everton Journey".