Jack
5 years
Awesome layout and a great squad there!
1
Login to Quote

Verdinho
5 years
Similar tactical set-up to what I usually prefer. Good to see I must be doing something right, theoretically

Justice
5 years
Jack, thanks!
SooruSooru, thank you
Verdinho, yeah I tend to stick to these three /standard/ tactical set-ups on FM. My tactics for Lupa Roma are a little different to the norm 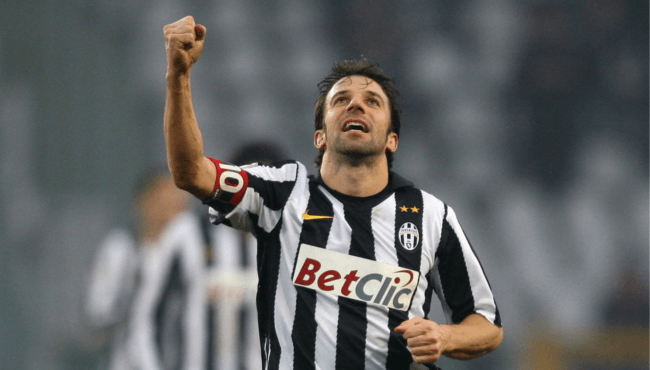 Former Juventus and Italian star Alessandro Del Piero has joined Lega Pro (third division) side Lupa Roma on a one-year deal. The forty year old striker joins Antonio Benvenuti's side having left Indian Super League side Dehli Dynamos in the summer. Upon sealing his move to the Roman side, Del Piero was awarded the role of club captain, replacing midfielder Gaetano D'Agostino.

Alessandro Del Piero made his senior debut for Padova in 1991, and sealed a move to Juventus in 1993, having made just 14 senior appearances. It was at Juventus where Del Piero would create his legacy. Making 705 appearances and scoring 290 goals, Del Piero became one of the greatest players in football history. At Juventus, Del Piero won a number of high profile trophies including 6 Serie A's and 1 UEFA Champions League. In 2012, Del Piero left the club he had been at for 19 years to join Australia's Sydney FC. He played at the club for two seasons before departing for Delhi Dynamos in 2014, and he now finds himself at the beginning of yet another new challenge.

Del Piero will find himself already loved by Lupa Roma fans, having already been awarded the captaincy, and being a national hero for helping Italy to win the World Cup in 2006. Despite being 40 years of age, Del Piero believes that he has more than enough energy to continue playing at a high level and he backs his chances to help the club climb the leagues.

Alessandro Del Piero: "It is a fantastic opportunity to sign for Lupa Roma. I have missed Italy in my absence and it is good to find a way back. I come to a very new club, a club which has only formed very recently, and I hope to create history here. I want to help the club to reach the heights that my former club Juventus reached and I believe that we are more than capable of making the necessary steps. First of all we must secure promotion to Serie B, and then prepare to fight for promotion to Serie A. This is certainly achievable.

Every day I get asked when I plan to retire, but every day I laugh off this same silly question. Yes I am forty years of age, but I still feel fresh. Maybe I can no longer fully rely on the physical side of my game but I can let my experiences of the game do the work for me. I feel that I have plenty left in the tank when it comes to stamina and while I may not be the quickest, I can make that up by knowing where to be and when to be in that position." 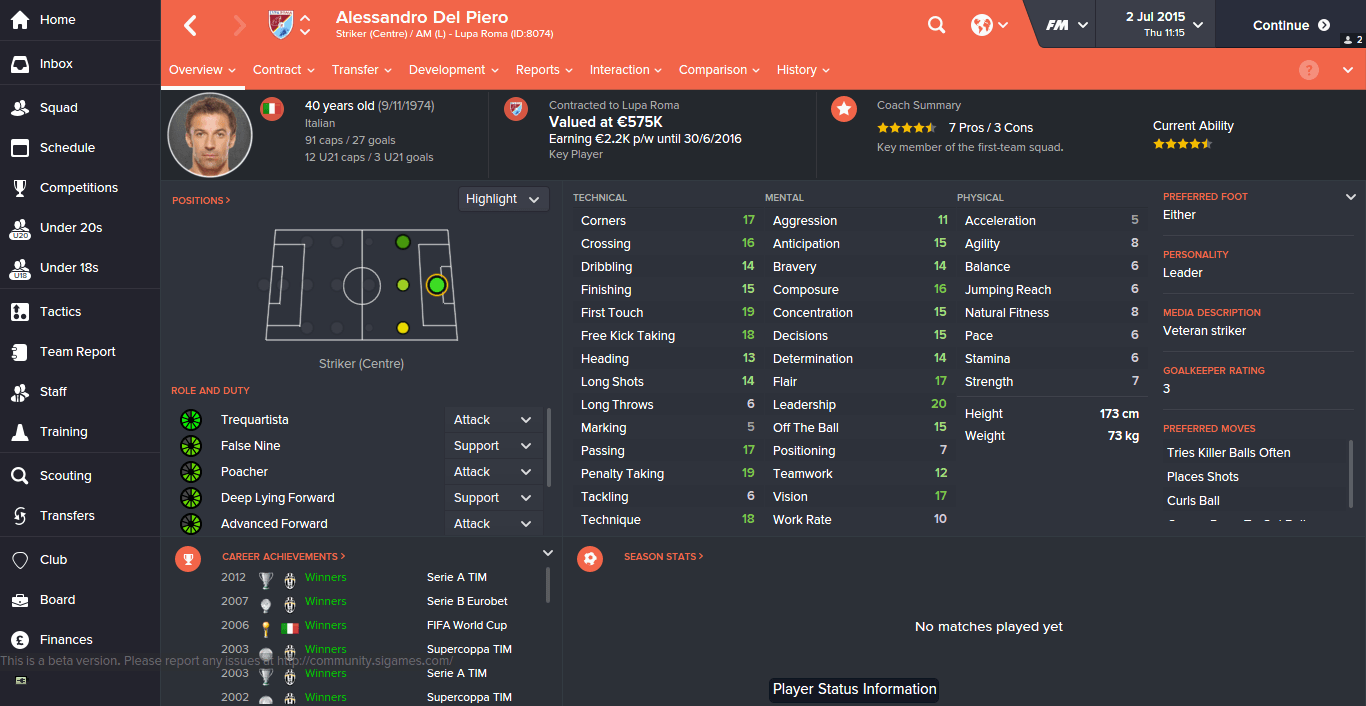 Jack
5 years
F*ck me that is huge for Lupa!
1
Login to Quote

C.J.Lippo
5 years
Quite a coup for Lupa to bring Alessandro back to Italy! Sure to get the crowd numbers up at the very least!
1
Login to Quote Following the arrival of Christian Schäfer as manager, Director of Football, and club legend, Ralf Minge resigned from his role, a move which sparked uproar from the fans. However, the signing of Gerd Müller has been greeted with joyous celebrations, with a new hope firmly in the hearts of the Dresden faithful. After all, Gerd Müller was one of football's greatest players. In 607 games during the 60s and 70s, Müller scored 566 goals for German giants Bayern Munich . He lifted three European Cups (Champions Leagues) and four Bundesliga titles in that time.

However, it may have been his international career which stood out more as he scored 68 goals in 64 appearances for West Germany. His most memorable goal was a 43rd minute goal which secured a 2-1 win for West Germany over the Netherlands in the 1974 World Cup final. This came two years after Müller and West Germany lifted the European Championship. Looking back at his career, Müller's signing was undoubtedly well received by Dresden's fans.

Gerd Müller was previously a coach of Bayern Munich's reserve side, but had made the change to experience the thrills of working with a senior squad. Müller spoke of his admiration of Christian Schäfer's coaching ideas and philosophies, and compared him to current Liverpool manager Jürgen Klopp.

Gerd Müller: "It is certainly an exciting moment for me to become a part of this fantastic football club. I enjoyed my time working with Bayern Munich's second team, but I feel that now is the right moment for me to work with a first team. Joining a club such as Dynamo Dresden was always on the top of my agenda and I did not even think of rejecting the offer.

Christian (Schäfer) called me himself and opened up to me about his vision for the club and where I would fit in his ideas. This appealed to me as normally a representative of a club would have made contact, rather than the manager himself. He is a fantastic person with a brilliant plan for this football club. I know that he will be successful here and I hope to help him on his way as best as I can.

In many ways he is like Jürgen Klopp. He is a very happy and friendly individual, with an eye for learning. Every aspect of football excites him, nothing passes through his eyes or ears without being stored somewhere in his head. I think he will be a fan favourite and the players will enjoy working with him.

The squad itself is very strong. I think that the current set of players is more than capable of winning the league title this season, but we will not be putting that pressure on the players. It is the start of a new era here and we must be patient. If there is a single thing I could take away from my career it would be to remain patient and work hard. If you can do that then success will follow." 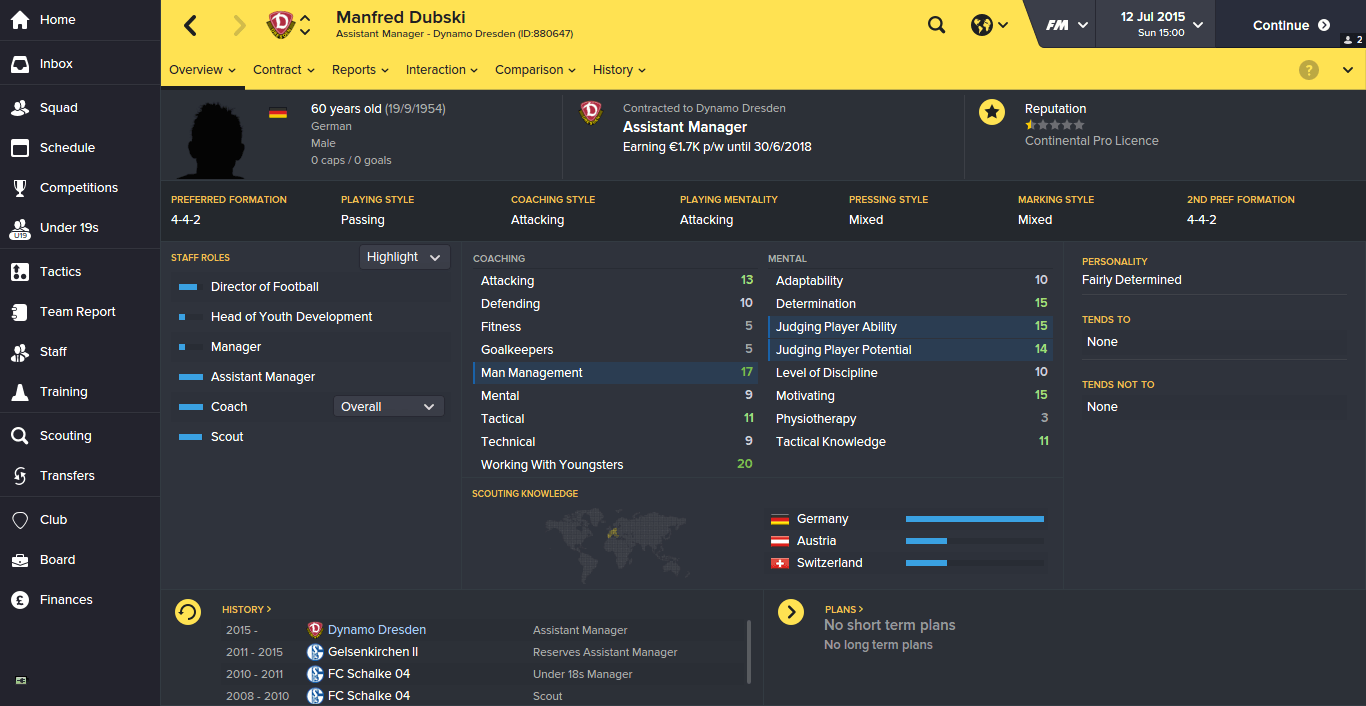 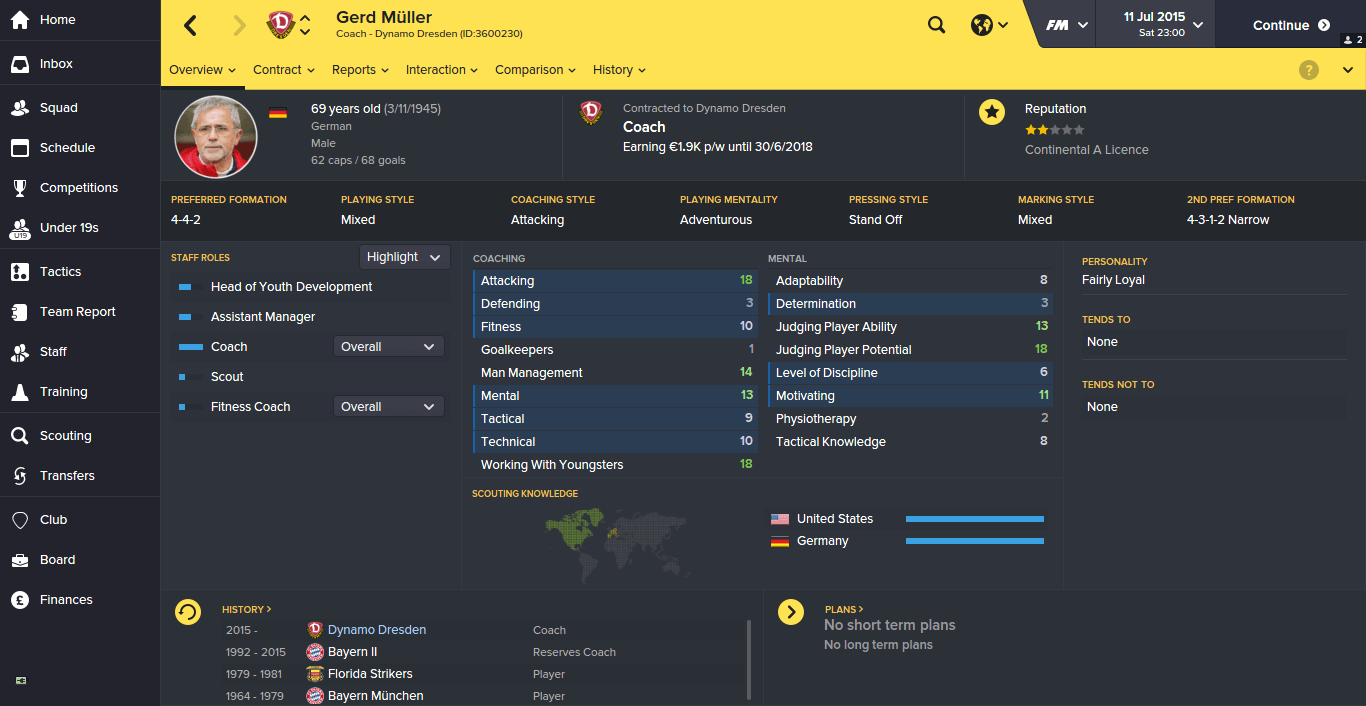 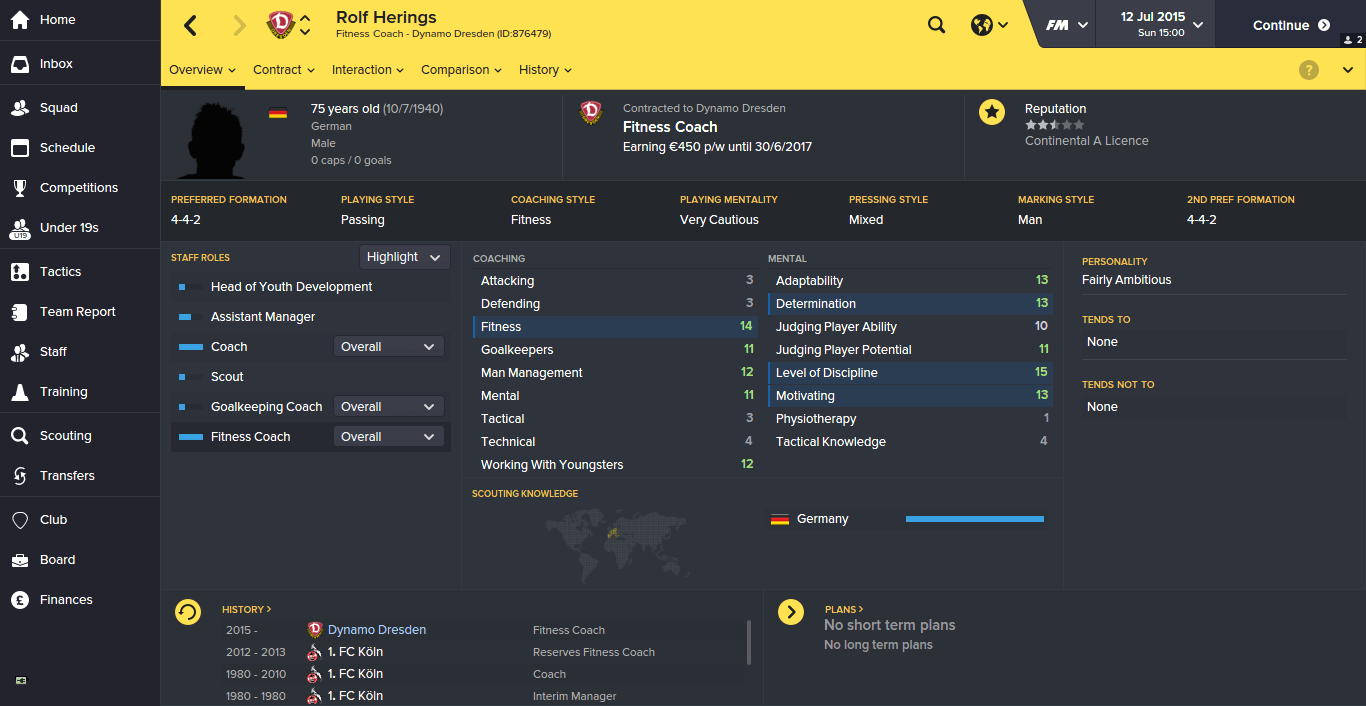 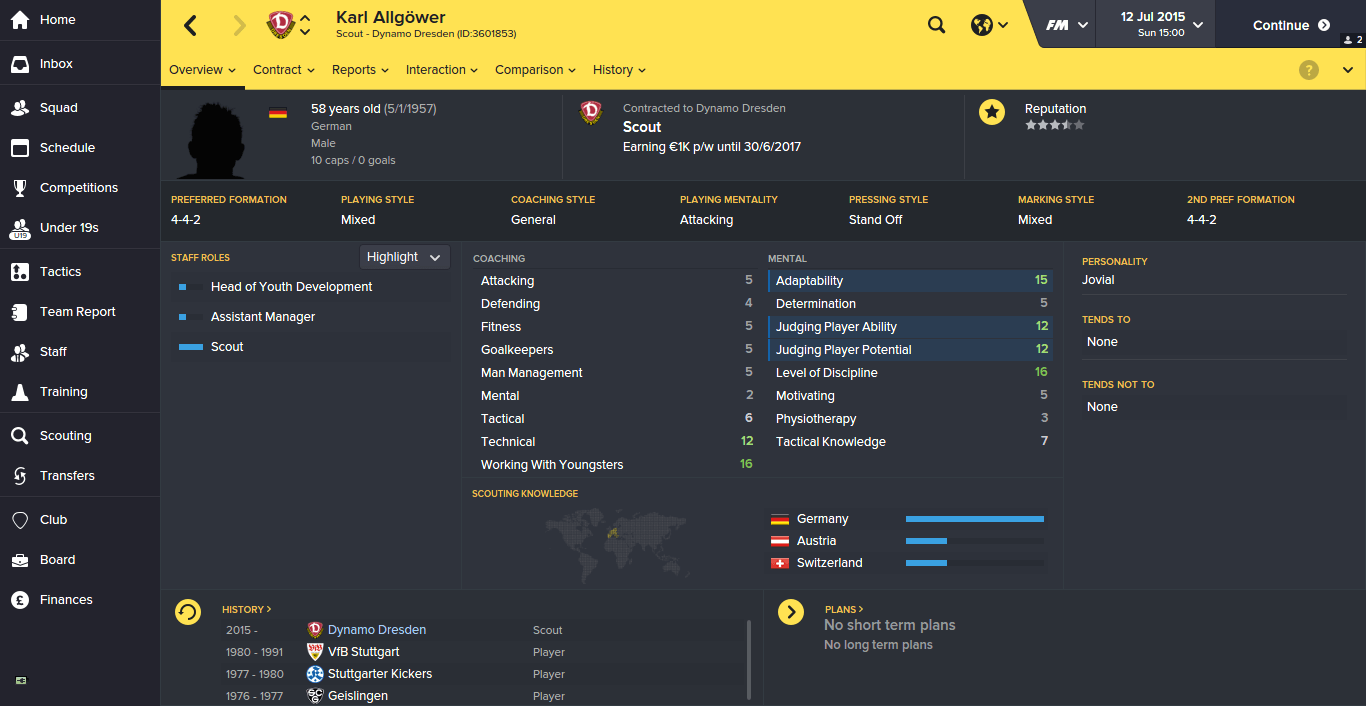 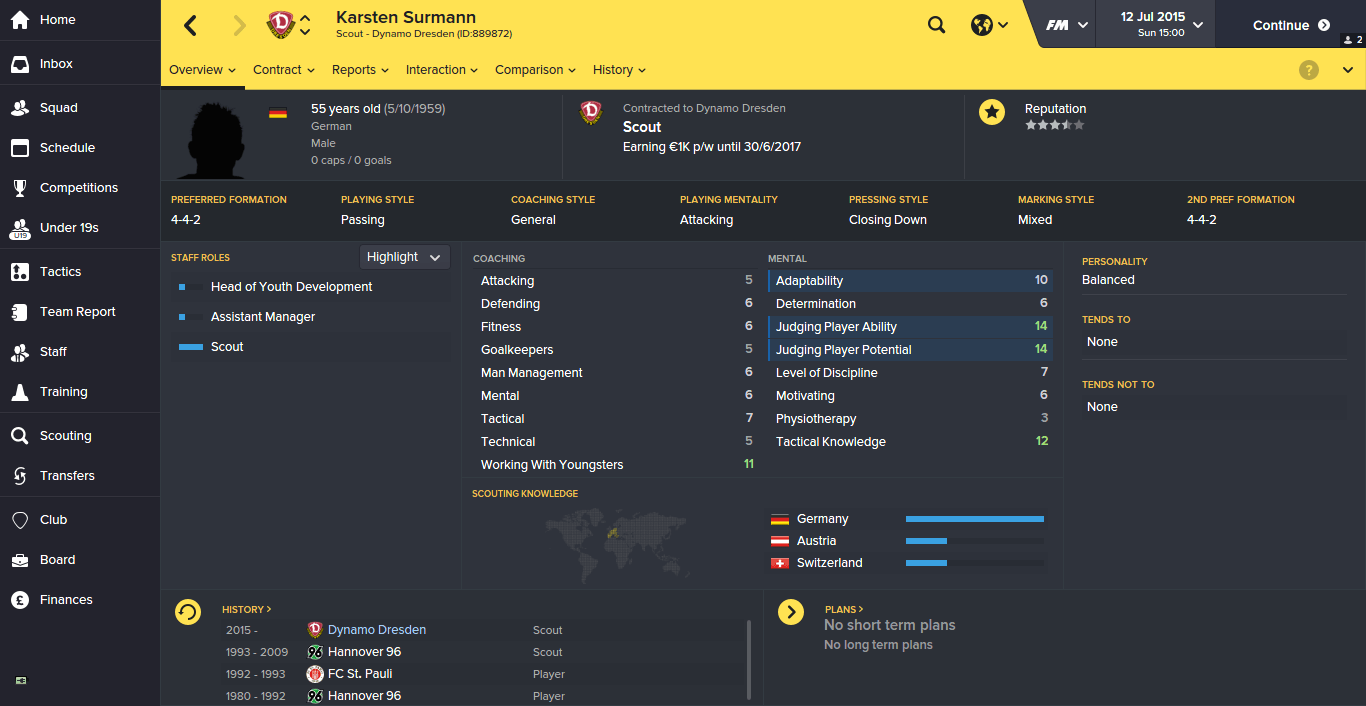 C.J.Lippo
5 years
A comparison to Klopp from the great Gerd! Quite the endorsement for the librarian there!

Understandable that the fans would be upset about losing Minge though, wouldn't we all be

Sorry, might be my last chance for a Minge joke

Walter
5 years
Nice addition to the staff team, even if he is German.
1
Login to Quote

Justice
5 years
C.J.Lippo & Walter, Gerd is a fantastic addition, even if he is German