Justice
6 years
MJK46 & mgriffin2012, thanks guys! It was a fabulous first season and exactly what was needed to hopefully set the tone for the rest of Christian's managerial career 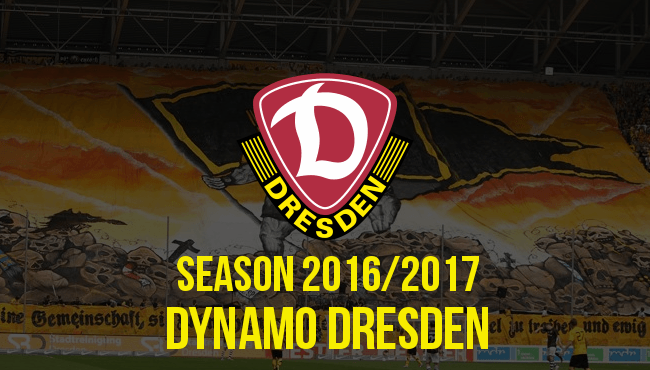 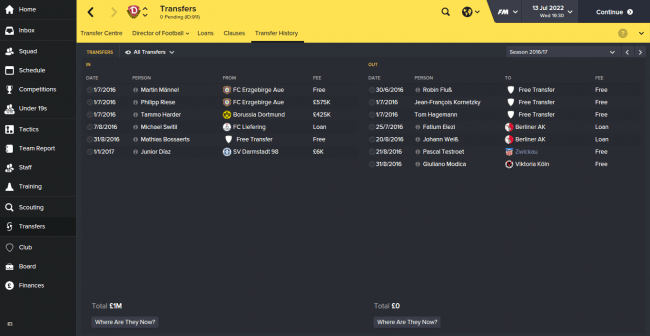 A few players left the club on free transfers having failed to impress their gaffer in his first season in charge. Tammo Harder was the marquee signing of the window, with the attacker joining from Borussia Dortmund for a fee of an estimated £425k. Former Manchester City defender Mathias Bossaearts joined on a free transfer to bolster the defence for the new division. 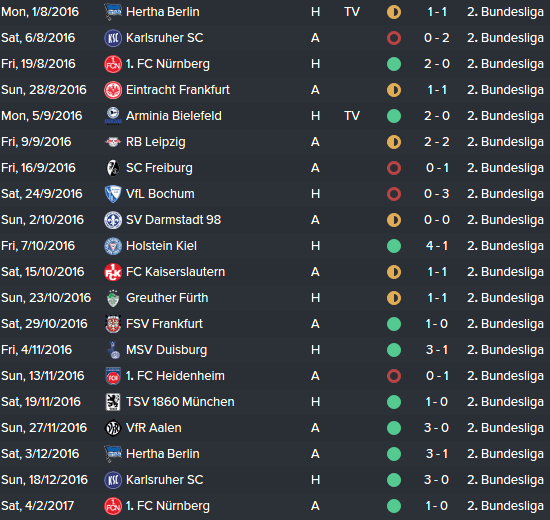 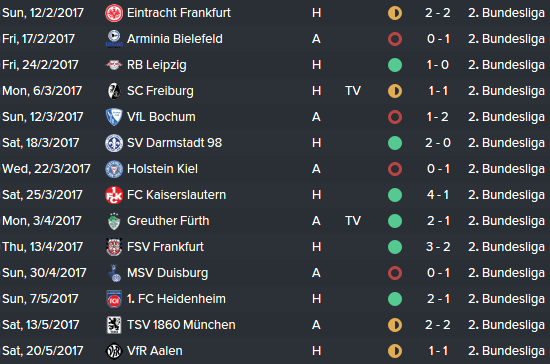 A mixed start was quickly forgotten about as Dynamo picked up some impressive form which lasted from October until February. This fantastic run of form proved to make the difference as the season wore on, and eventually Dynamo finished in a very unexpected second place position, earning yet another promotion. Dynamo Dresden would be playing Bundesliga football in the next season! 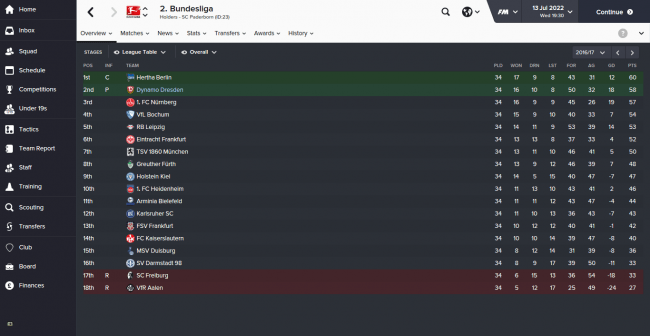 We performed well considering we were paired up against Bundesliga side Augsburg. We brought them to extra time and it took a stunning strike from Alexander Esswein to settle the affair. Maybe next time we would progress further.

C.J.Lippo
6 years
That was the easy part, now to knock Bayern off their perch!

Justice
6 years
Jack, yeah we had a strong squad to begin with in the first season, so I didn't have to upgrade too many positions to be able to compete in the second division

C.J.Lippo, if only that would be as easy 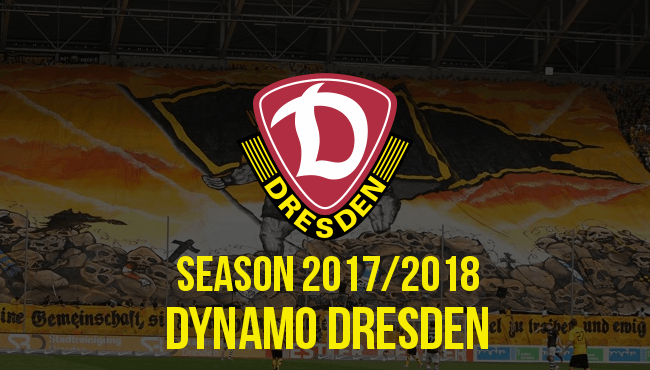 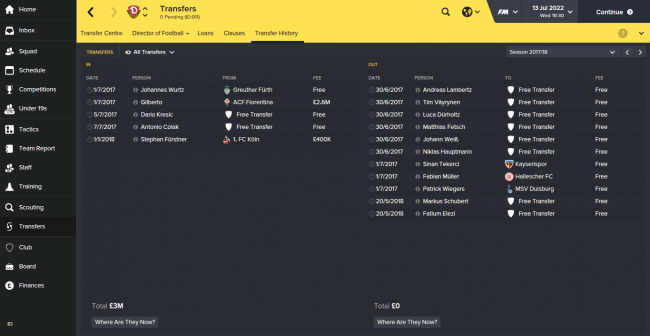 To prepare for our first season in the Bundesliga, we released a lot of players who would not be of the standard required to survive in Germany's top division. Brazilian right-back Gilberto proved to be our most expensive signing, coming in for £2.6M from Italian side Fiorentina, while Johanes Wurtz and Antonio Colak came in for free transfers to strengthen our attack. 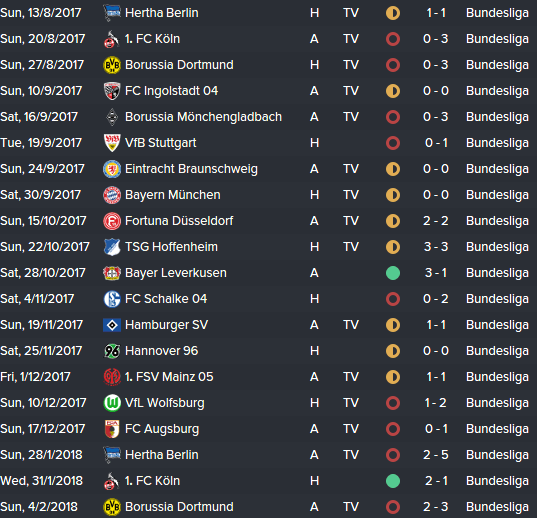 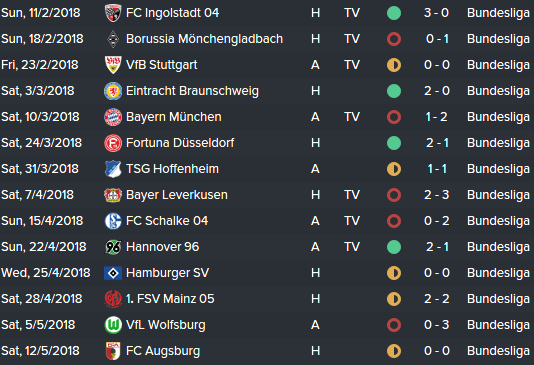 We did not start our first ever Bundesliga campaign at all well, going without a win in the opening ten games. However, the final four of this run of games were draws, as we began to consistently pick up points. Game No.11 saw us pick up our first victory, away to Bayer Leverkusen of all teams! However, we struggled to sustain a consistent run of form and our next victory only came on the final day of January when we beat FC Koln. We picked up a few more wins here and there to gather what proved to be enough points to survive for another year in the top flight of Germany. Hopefully we would build on that in the next season. 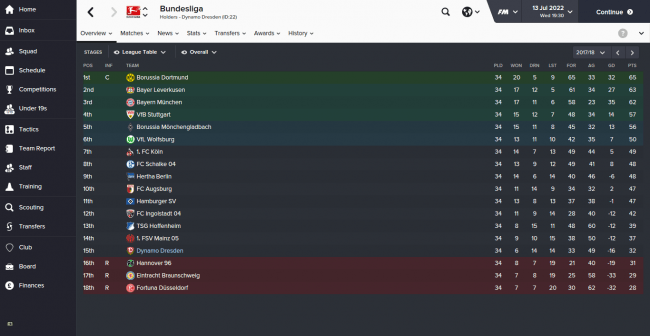 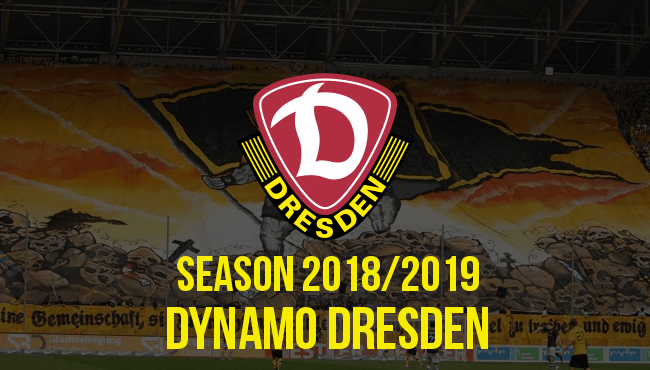 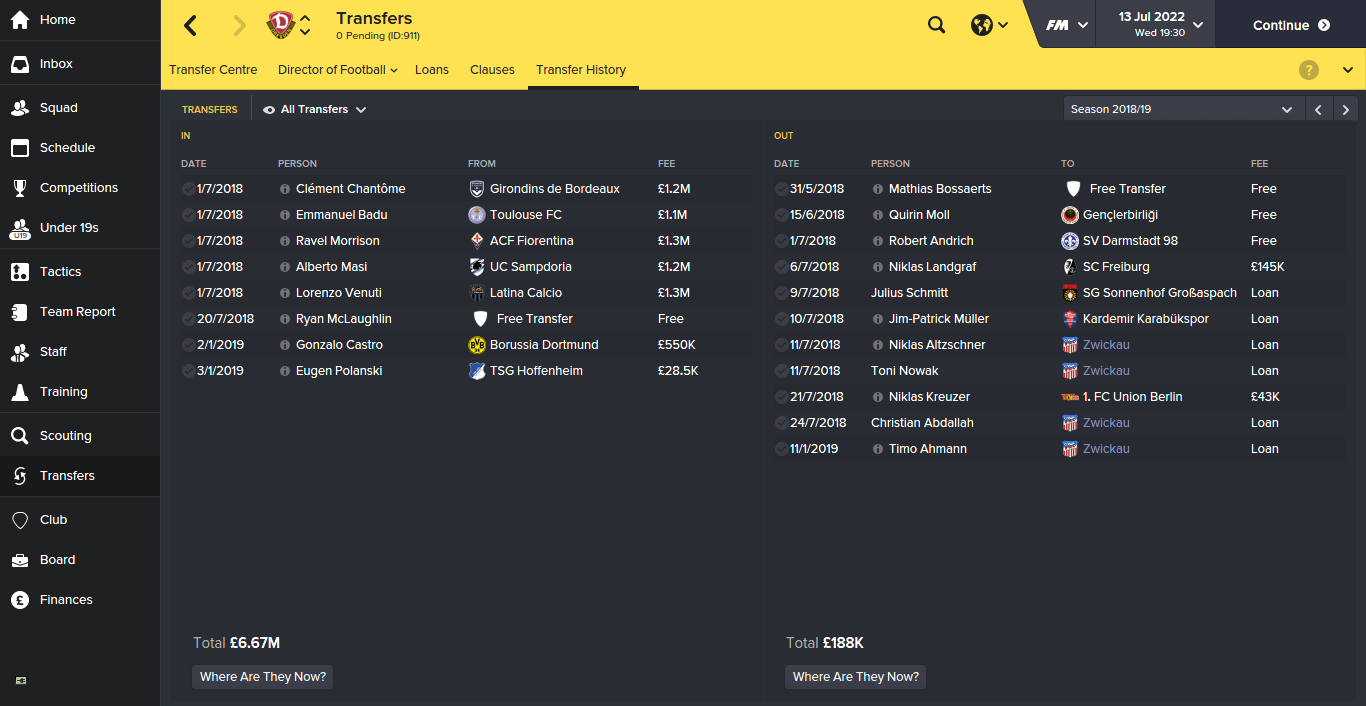 With an influx of prize money from competing, and surviving, in the Bundesliga, we were able to bring in a number of quality players. Experience was the call of the day as Clément Chantome, Emmanuel Badu, Gonzalo Castro and Eugen Polanski were brought in. Alberto Masi would prove to be a key player in future seasons, while Ravel Morrison was a reason for excitement among the fans. 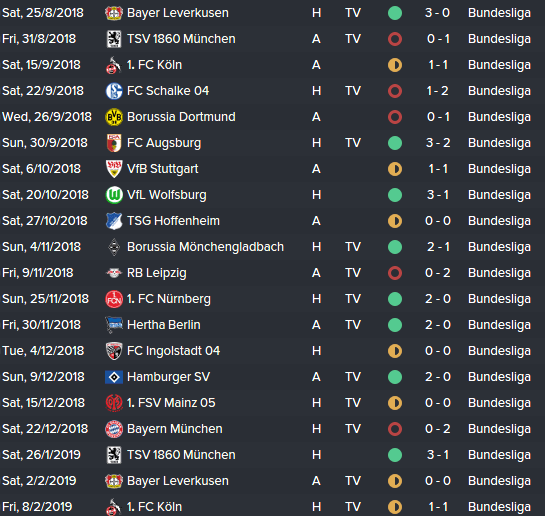 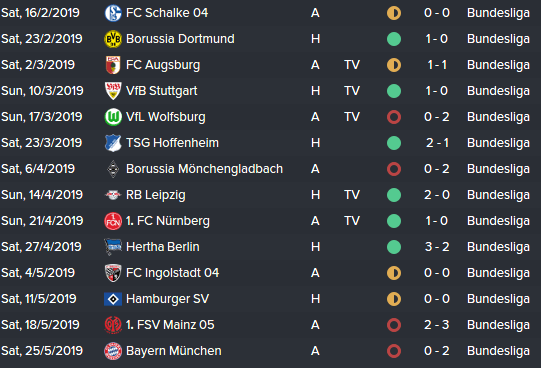 A stronger squad meant better performances and better results, and we certainly laid down a marker at the start of the season when we demolished Bayer Leverkusen at home. Exciting victories over Wolfsburg and Borussia Dortmund meant that the league season was certainly one to remember and while Bayern Munich brought us back down to earth on the final day of the season, defeat was not enough to knock us out of a tremendous fourth place finish. What a season! 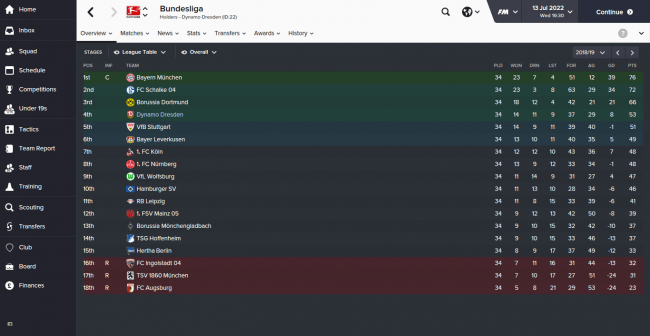 It was a cup run to remember as we defeated every team in our path to lift the DFB-Pokal. We ended the season having qualified for the Champions League, and lifting some very valuable silverware.... We couldn't have asked for more!

Jack
6 years
The turnaround from narrowly avoiding relegation by a point to a European place in the space of one season really is admirable! Great stuff mate

I don't think I could do it
1
Login to Quote

mgriffin2012
6 years
Champions League football next season (unless Germany have slipped a place in the rankings) is fantastic! Nice one mate!
1
Login to Quote 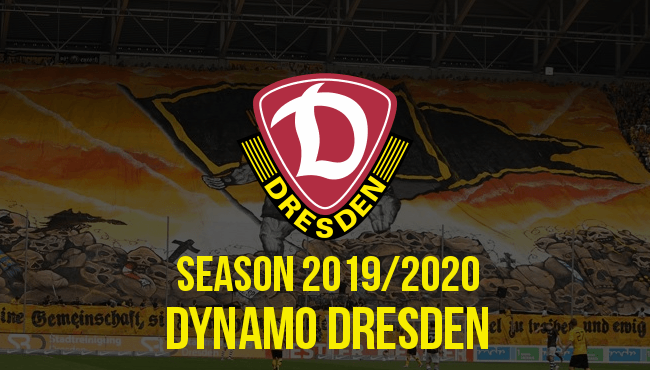 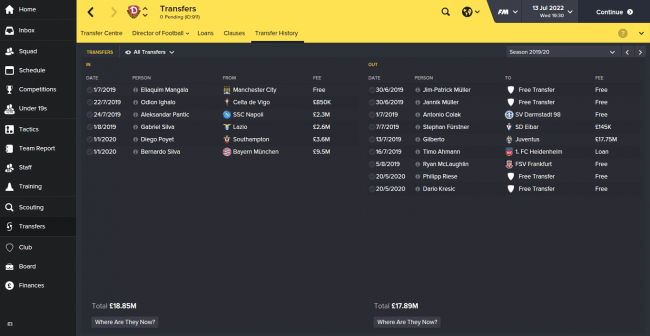 A transfer saga revolving around Gilberto engulfed the summer. Having endeared himself to the Dynamo faithful in his two seasons at the club, it was a disappointment to see him move to Juventus, despite receiving a big sum in return. With Dynamo in the UEFA Champions League for the first time, big name signings were needed. Eliaquim Mangala joined from Manchester City following the expiration of his contract, while Bernardo Silva joined in January for a fee of just below £10M. Meanwhile, Aleksander Pantic came in to replace Gilberto, with big boots to fill.

Winning the DFB-Pokal last season meant we would face league champions Bayern Munich in the DFL-Supercup. Despite summer reinforcements, however, we were completely outclassed and were comfortably beaten. 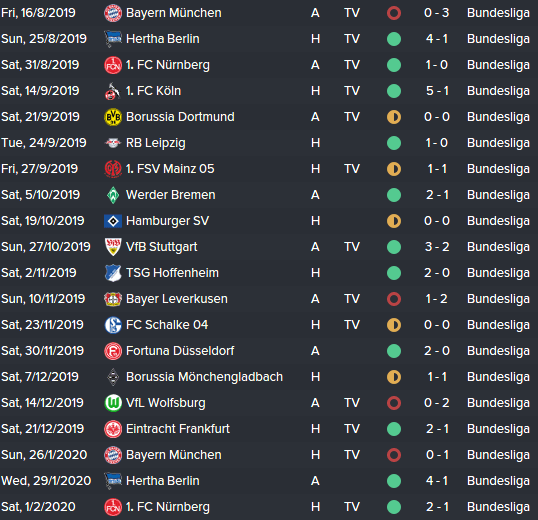 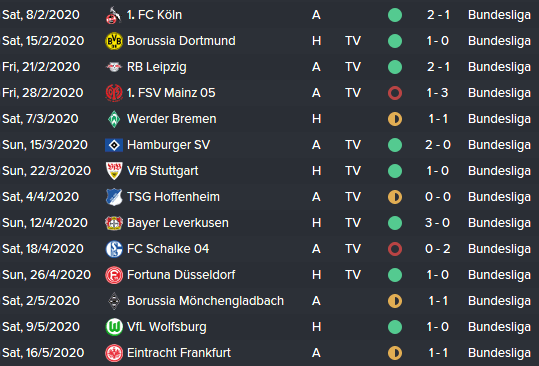 With every passing season, we grew in strength and this showed in our league results. We secured crushing victories over FC Koln, Hertha Berlin and Bayer Leverkusen which set the tone for what was a very successful league season. Our consistency against the weaker teams shone through and helped us towards our first Bundesliga title. Truth be told, it was a poor showing from the stronger teams and we were lucky that a relatively low amount of points was required to secure the title. Despite this, what an achievement this was for us! 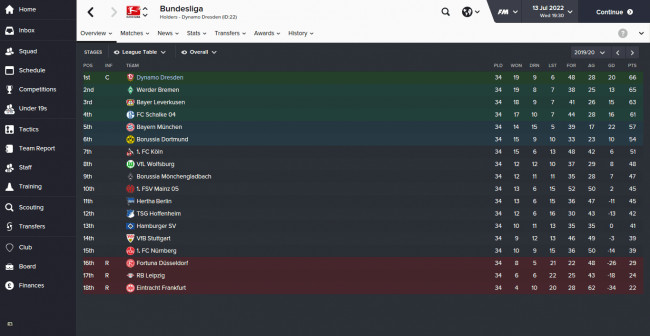 We were drawn against Porto in the play-offs for the Champions League, and we defeated them in what was certainly a difficult tie. In a group with Juventus, Arsenal and Benfica, we were considered to be the underdogs. However, we rose to the task at hand, earning 10 points and topping the group in the process. Monaco faced us in the Last 16, and they proved to be a hurdle too high for us, knocking us out. We were delighted with our performance in our first European season, proving to be able to contend with the best teams in Europe.

After winning the cup last season, we were expected to challenge once again. However, it took extra-time for us to get past the first two rounds. We then faced Stuttgart in the third round, but they defeated us comfortably.