The dynamic left winger has joined the Merseyside club for a fee estimated at £13 million Kostic took up the chance to join Liverpool as he wanted to take a step up in this career and compete in what he said in a recent interview 'Is the best league in the world.' Kostic continued to say 'They have world class players like Coutinho and Firmino I just cant wait to work for them, and the manager Jürgen Klopp is one of the best managers in the world.'
Login to Quote 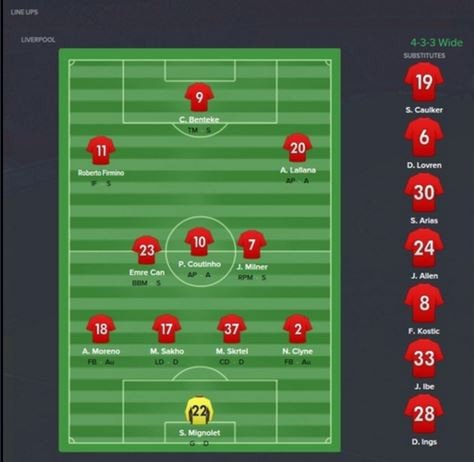 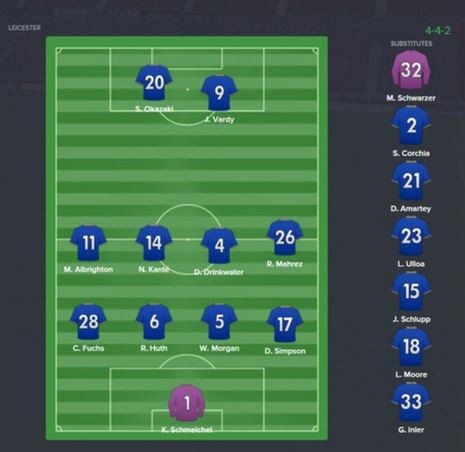 2 min- Lallana shoots from 28 yards only parried by Schmeichel, Benteke taps in the rebound 1-0 LIVERPOOL

35 min- Benteke subbed off because of a gashed head

43 min- Neat through ball by Milner finds Ings Huth hacks down Ings, Ings was one on one with the keeper, so their is only one outcome Huth is off

90 +2 min- Lallana has been sensational

Adam Lallana Man of the Match
Login to Quote

ScottT
6 years
Great way to kick off the season. Hopefully you can aim for top four 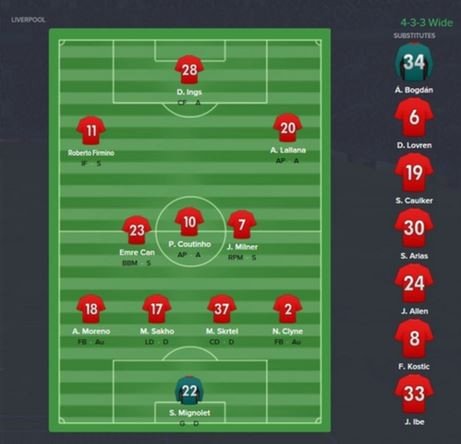 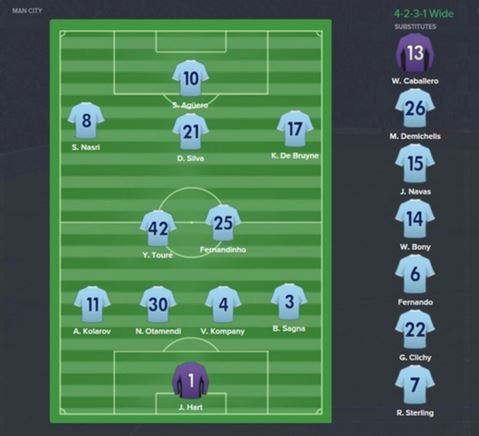 64 min- Otamendi plays the ball long to Nasri; Nasri then passes to Aguero he darts pass Sakho rounds Mignolet and that is it 2-0 Manchester City

Liverpool could do nothing to stop the skill and class of Man City's star man Sergio Aguero first a wonder strike hit from around about 35 yards after dancing past two Liverpool players, the second a great pass from Nasri put it on a plate for the Argentinian and all the had to do was stick it in the net from 7 yards, Liverpool will feel hard done by as the possession was nearly even Man City's 55% to Liverpool's 45%, however Man City had more shots than Liverpool and Simon Mignolet was definitely the keeper who was sprung into action more than his opposite number Joe Hart. This result shows that Liverpool may not be challenging for a title this season, but with returning players like Daniel Sturridge, and Jordan Henderson top 4 is a possibility if Liverpool are consistent in their performances/ results.
Login to Quote 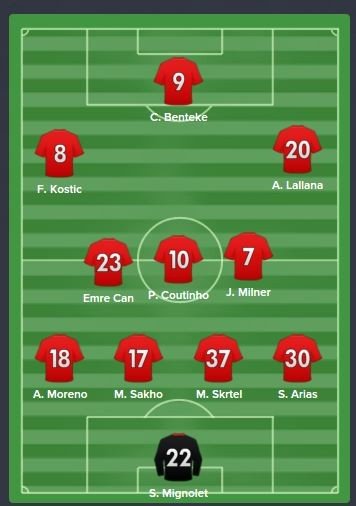 Liverpool made 3 changes a first start for
Kostic, Arias and a return for Christian
Benteke 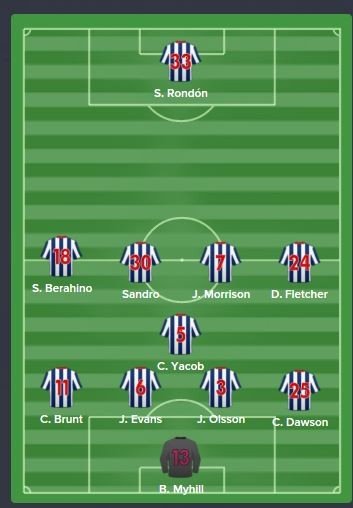 2 min- Kostic receives the ball from Benteke he then crosses Lallana taps it in at the far post 1-0 LIVERPOOL what a start!

45 min- Morrision passes to Rondon he then glides pass Sakho plays it pass Skrtel he then shoots from the tightest of angles and somehow it curves in 2-1 are West Brom back in this?

Liverpool put in a solid display against a strong West Brom side, a first start for Kostic was worth the risk when Kostic assisted Adam Lallanas goal in the 2nd minute, Liverpool found much joy down both flanks as was evident in the second goal were Alberto Moreno's cross met Christian Benteke in the middle,the only negative in Liverpool's performance was that West Brom scored a good skillful run by new West Brom signing Salamon Rondon ended up in 2-1 on the brink of half time. Liverpool buried West Broms fans hope of a point when new signing Arias delievered a great ball for recent sub Danny Ings and it was easily tapped in. This win should put Liverpool in good stead to face rivals Chelsea

Liverpool get Tottenham in Captial One Cup 3rd round 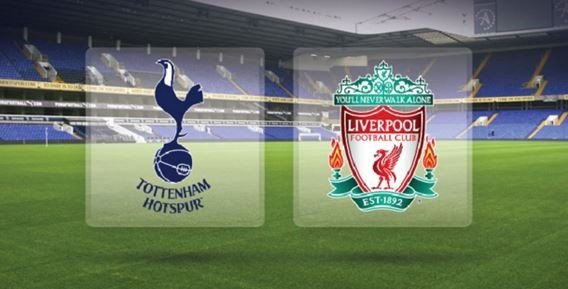 Liverpool will felt hard done by as they have drawn fellow top 4 contenders Spurs, the game will be played at Anfield on the 23rd September, and with the draw pitting two strong teams together a bumper crowd is expected for what will be a close fought tie.
Login to Quote

Liverpool have been drawn in Group I the group contains Spanish club Villarreal Lokomotiv Moscow from Russia and Rosenborg of Norway, many fans believe Liverpool have a great chance of qualifying and chasing after their first trophy in 3 years.
Login to Quote 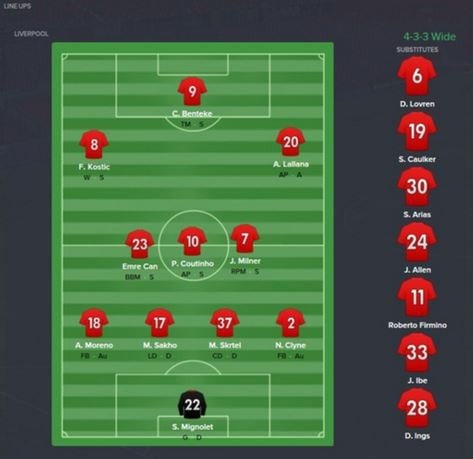 Only one change Clyne replaces Arias at right back 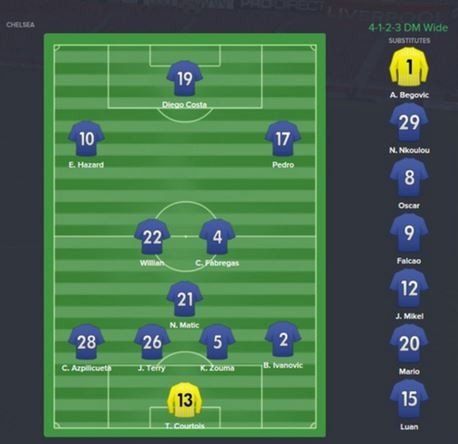 1 min- Lallana puts the ball over the top for Benteke he controls it well 17 yards out he strikes it GOAL!!! what a strike from Christian Benteke 1-0 Liverpool

72 min- Willian still going can he find a way through? Yes he can Mignolet rushes out a Willian applies the finish by chipping it over the Belgian keeper 2-1

Liverpool put in a great all around performance this was most likely helped by the early Benteke goal and later on his second of the evening Liverpool only conceded through sheer brilliance by WIllian as he raced through the box and chipped the ball over Liverpool's onrushing goalkeeper confidence will be high in the dressing room and Liverpool and Klopp will hope this form will transfer over to the next Premier League game which is against Newcastle. Kostic is also showing his worth by providing another assist that now takes his tally to 2 assist in 3 games for the Serbian superstar. 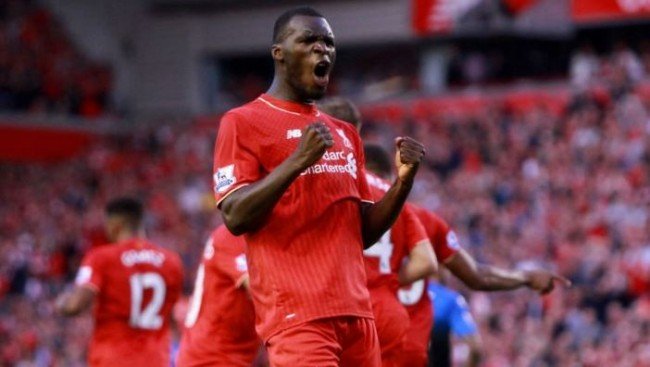 Christian Benteke Man of the Match
Login to Quote

mgriffin2012
6 years
Great result man, always nice to get one over Chelsea!!
Login to Quote

Welsh midfielder Joe Allen has surprisingly joined Ukrainian side Shakhtar Donetsk for a fee of £7million, Allen clearly wasn't in Jürgen Klopp's plans as he didn't start one competitive game for Liverpool this season and only made three appearances of the bench. Jürgen Klopp has also decided to loan out one of Liverpool's most talented youngsters Jordon Ibe to Watford for him to gain more first team experience. The biggest spenders in this window have been Arsenal who spent £44 million this was mainly on Jonny (20.5m) and Fred (21m) fellow London club Tottenham also spent big spending £16.25 million on Turkish star Hakan Çalhano?lu.
Login to Quote

August has been a good start for Klopp and is team showing great attacking performances and showing that lethal instinct from the first whistle, Liverpool's defense has only kept 1 clean sheet in 4 games however the goals they conceded are through sheer acts of brilliance (Aguero's goal) This is a near perfect beginning for Liverpool and the Klopp effect is working it's magic his gegenpressing is catching teams off guard and is working so far, however it is leaving the defense isolated this is mainly why they have conceded so many goals.

After the opening 4 games Liverpool find themselves high in the table and in 3rd place levels on points with Watford the only people above Liverpool are title chasing Arsenal and Manchester City, the only real surprise so far is Manchester United are so low done after having such easy fixtures as they faced Sunderland, Everton, West Ham and the one exception Arsenal. 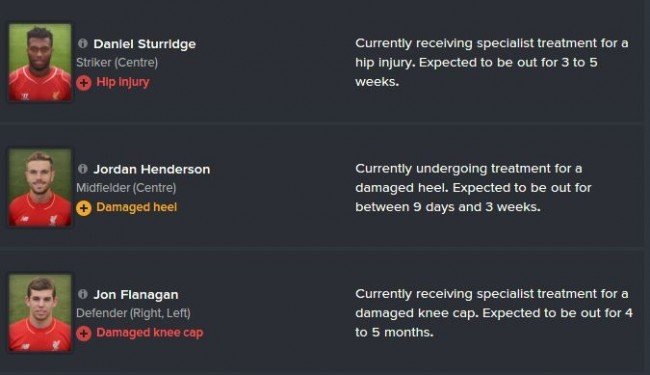 Liverpool are only dealing with three injuries however Sturridge and Henderson are key players for Liverpool and will be key if they hope of getting that elusive Champions League spot, Daniel Sturridge is out for 3 to 5 weeks due to a hip injury and Henderson is out for 9 days to 3 weeks because of a damaged heel young full back Jon Flannagan is also out injured for 4 to 5 months. On form striker Benteke is also out injured for 4-5 weeks with a twisted ankle

Adam Lallana has been great in August providing goals (2) and assists (2) because of his great form Lallana has started every game so far and he seems to be a key player in Jürgen Klopp's side going forward.
Login to Quote 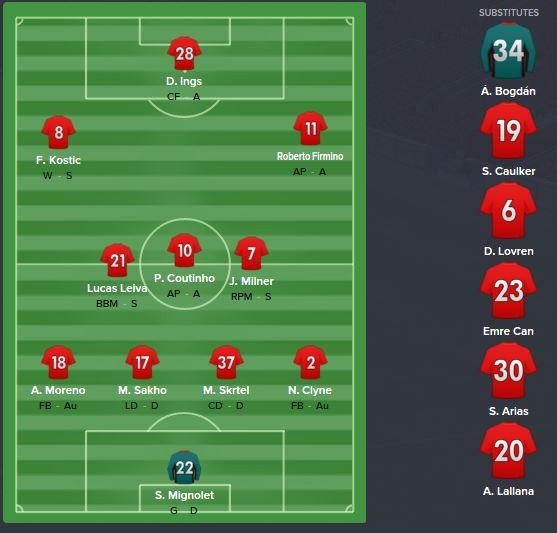 Ings replaces the injured Benteke Lucas Leiva starts ahead of the
tired Can, and Firmino replaces Lallana who has a minor knock 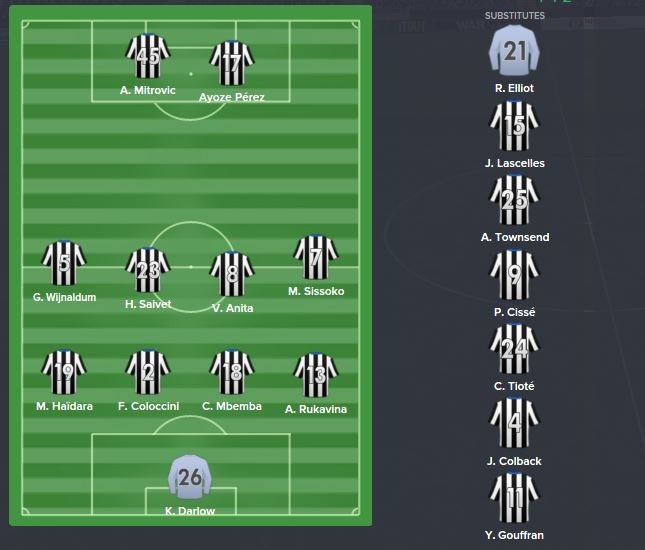 17 min- Great passing by Newcastle Mitrovic bears down on goal shoots! Great save by Mignolet

78 min- Coutinho passes to Milner in the middle, Milner winds up to shoot off the bar! so close from the Liverpool captain.

Liverpool put in a solid performance the defense was at its best, blocks and crosses were dealt with ease by Sakho and Skrtel and the wingers were not allowed anytime on the ball because of great pressing by the midfield and the full backs, the attack wasn't as lethal as it has been of late this was mainly because of the absence of Christian Benteke Liverpool's top goal scorer. Kostic also claimed his first goal for the club a little fortunate as the Newcastle keeper Darlow spilled a simple cross and it fell straight into the path of Kostic who tapped it in with ease, Liverpool now face a trip to Russia and to face Lokomotiv Moscow in the Europa League with Klopp using a weaker team it looks like Klopp is taking the Europa League seriously and he wants to go all out against Lokomotiv. 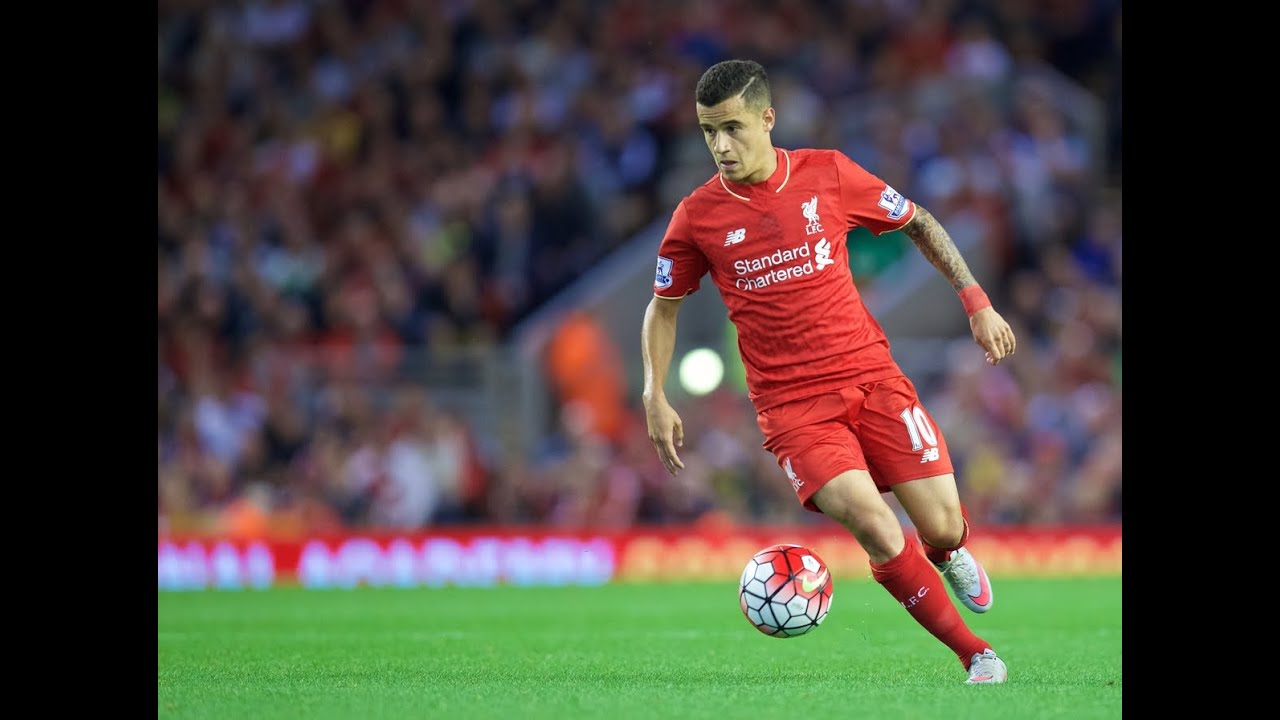 MJK46
6 years
You have put a lot of detail into this story and it is very interesting how you are doing it match by match!! Keep it up
Login to Quote


Thanks for the support I'm surprised more people don't use the match by match format, but it does take a along time.
Login to Quote