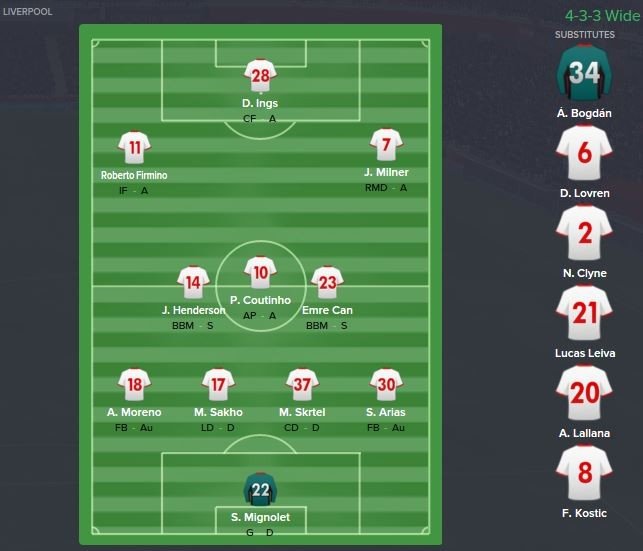 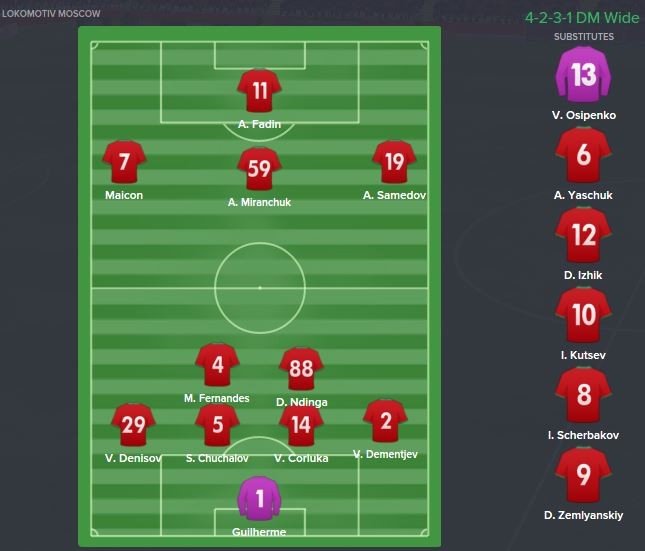 10 min- Arias switches to Moreno on the left wing he crosses Ings! Off the bar so close!

31 min- Coutinho whips in the corner the defender clears, Henderson on the volley what a goal 1-0 LIVERPOOL

40 min- Great over the top ball by Countinho Ings is one on one and scores! 2-0 LIVERPOOL

50 min- The corners whipped in Skrtel clears, but straight to Fernandes he shoots 2-1 it was straight at Mignolet poor goal keeping.

A typical away performance from Liverpool reminiscent of the 2004/5 campaign when they won the Champions League they grinded out the result.A typically strong performance from the center back pairing of Skrtel and Sakho, again Mignolet had an extremely inconsistent game making a world class double save, but a few minutes later letting in a tame effort from 18 yards this will then raise questions, should he be dropped for the next game against Spurs? only Klopp will know the answer to that. The return of the captain Jordan Henderson was great the box to box midfielder is a key element to Liverpool's high tempo attacking play and he should slot back into that midfield perfectly, he took his goal extremely well a sweet volley from just outside the box, a great return for the captain.

Emre Can Man of the Match
Login to Quote 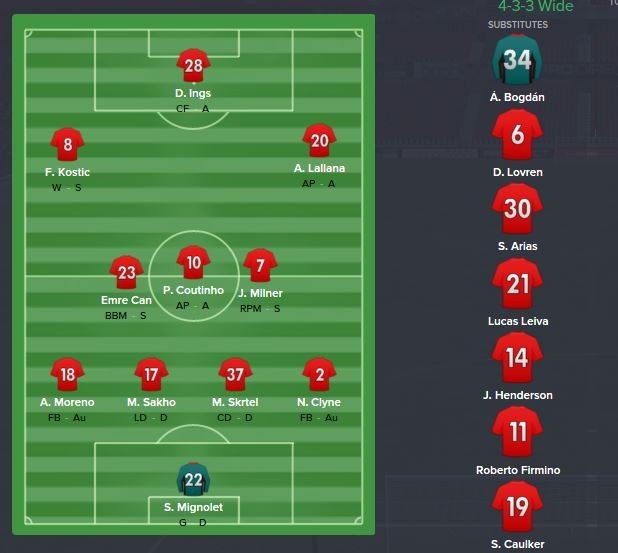 Liverpool replace Arias with Clyne, Lallana
for Henderson, and Kostic for Firmino. 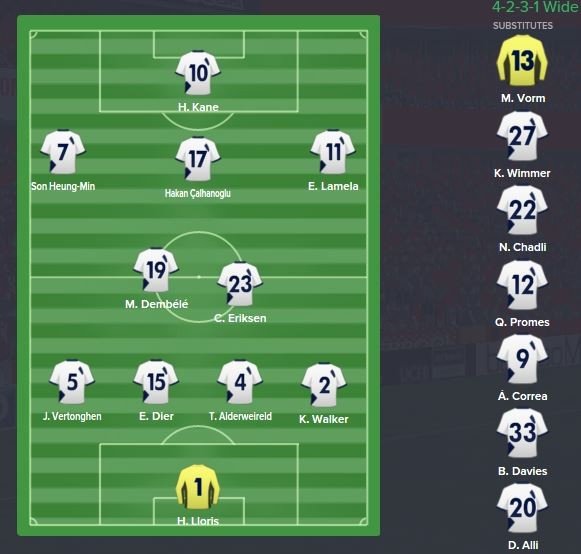 55 min- Ings nice one two with Lallana; Lallana through to Coutinho, Coutinho under LLoris and it is 2-1 to LIVERPOOL

82 min- Clyne bombing on now he passes to Can 17 yards out he shoots off the bar so close for the German.

Another Liverpool game another Coutinho masterclass the little Brazillian dominated the pitch through his point passing and majestic dribbling in the final third. First he delivered a great ball onto the head of Sakho which then made it one nil and he took his goal superbly a great touch after a Lallana pass and a simple finish under Lloris made it two one. Lallana continued his great run of form by collecting another assist which now takes his total to 2 goals and 3 assists in the Premier League alone. The partnership of Skrtel and Sakho continues to blossom however their missed interceptions led to Erik Lamela's goal, one mistake too many for the center back pairing which will be disappointed they didn't keep a clean sheet. Next game is also against Spurs in the Capital One Cup as the board believe the cup isn't that important many people believe club will use a rotated side and will try to introduce and blood in some youngsters into the first team. 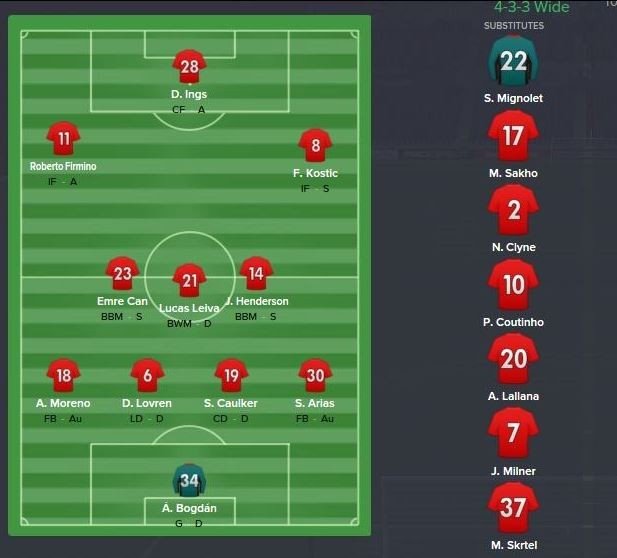 A whole host of changes for Liverpool
Bogdan comes in for Mignolet Caulker and
Lovren come in for Skrtel and Sakho
Arias comes in for Clyne, Lucas for Coutinho,
and Firmino for Lallana 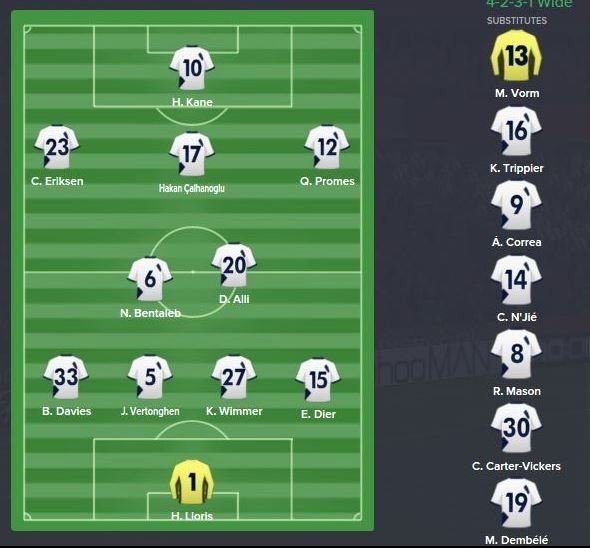 11 min- Davies passes back to Lloris the pass it too short Henderson latches onto it he shoots good save by Lloris.

Liverpool took the risk and it didn't pay of, Klopp's rotated side worked well and put up a good fight, but it wasn't good enough, the quality in the final third wasn't their Ings looked tired so did Firmino and Kostic a break is needed for Liverpool to get back to their best. A debut for Hungarian keeper Adam Bogdan was a surprise for many fans and he didn't dent his first choice hopes at all as he put a solid performance in against some world class forwards like Harry Kane. Liverpool now face a trip to the Liberty Stadium to face Swansea which will most likely be a tricky encounter.
Login to Quote

MJK46
6 years
Sucks about the loos there
Login to Quote 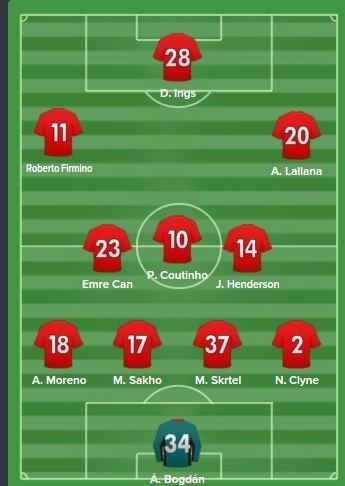 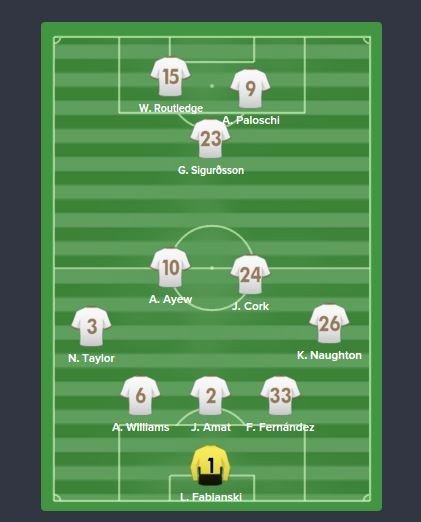 10 min- Coutinho shoots Fabianski can only parry it, but it falls straight into the path of Firmino 1-0 LIVERPOOL a scrappy goal, but they all count

62 min- Williams pulls back Coutinho will this be his second booking? Yes it is Williams is off a big blow for Swansea

A good result against Swansea now puts Liverpool top of the Premier League. Klopp brought back the attacking flair which has been missing in recent games, Firmino was on fire with his passing all game,he was rewarded for all this hard work when Fabianski parried the ball straight into the path of him and he tapped it in a big confidence boost for the Brazilian. Klopp also stuck with Huungarian keeper Adam Bogdan who turned in a good performance and kept a clean sheet, this was no surprise to many fans as Simon Mignolet of late has been letting goals in left right and center. Now Liverpool face a key game in the Europa League against Norwegian side Rosenborg, then Anfield is host to Liverpool vs Norwich City.

Roberto Firmino Man of the Match
Login to Quote

ScottT
6 years
Good win, maybe next update try and include the league table?

Thanks I will update everyone on my league position every month in the monthly review.
Login to Quote

mgriffin2012
6 years
Some great results mate! Shame about the Spurs loss though! Would be great to see where you are in the league mate
Login to Quote

Liverpool have had an extremely strong month by only losing one game in six this is mainly because the attacking play on show has been mesmerizing this is especially apparent in Liverpool's demolition of Swansea when the beat them 2-0 at the Liberty Stadium, Klopp's attacking options will be enhanced even more with the return of star strikers Daniel Sturridge and top goal scorer Christian Benteke, which will add that extra attacking edge which could be the difference at the end of the season. Liverpool's defense has improved keeping a clean sheet against Swansea this will be a great sign for Klopp and for his team going forward.

After another solid month Liverpool find themselves in 2nd in the Premier League with a game in hand over close rivals Manchester City, The Reds also find themselves top of their group (Group I) in the Europa League level on points with Villarreal of Spain, consistency especially in the league will be key for Klopp and his side, and every point will be vital.

The Reds games for October are a mixed bag the first two games look easy on paper, but will be tricky as both sides Norwich and Southampton are strong then they face Villarreal a difficult game as Villarreal will be up for a fight and will also be chasing that top spot in Group I. Next is bogey team Crystal Palace who have been a thorn in Liverpool's side for the past few seasons with them currently in 15th however this should be an routine game, then it is fierce rivals Manchester United at Old Trafford a game which is not decided by form it is decided by heart and desire this will be an extremely tight game it could go either way.

Liverpool have 4 first team injuries first Lallana who is out for 11 days due to a calf strain, and Daniel Sturridge, Christian Benteke, and Danny Ings who are returning to full fitness immediately. 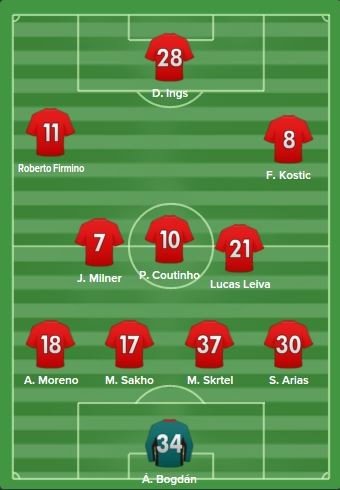 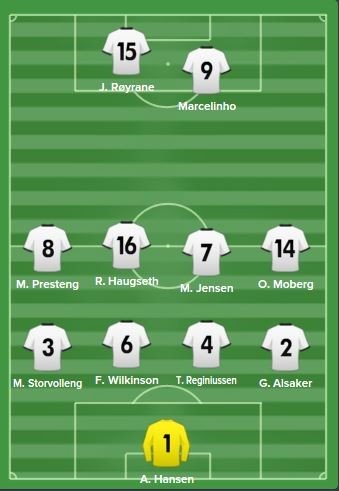 
12 min - Coutinho drives the ball into Firmino's feet, with ease he goes past Alsaker Firmino shoots great finish by the Brazilian 1-0 LIVERPOOL

24 min- Coutinho hits the corner in handball! the referee has awarded Liverpool a penalty after a Rosenborg player handled in the box James Milner steps up and scored 3-0 LIVERPOOL

57 min- Coutinho plays a lovely ball to Ings, Ings hits a hopeful looking shot it goes in over the keeper 4-0 LIVERPOOL

Liverpool put in another great European performance as they easily brushed aside Rosenborg of Norway as they scored five goals. Rosenborg were dominated from the first whistle and they were not given anytime on the ball by any of Liverpool's players, this high tempo helped set up the first goal when Firmino robbed the ball of the defender and then expertly stuck it into the top corner, this excellent result now sees Liverpool top of Group I on goal difference.

We put in a good performance for the side that we put out, but we just couldn't put the ball into the back of the net
Login to Quote

mgriffin2012
6 years
Thumping win over Rosenborg there! Keep it up!
Login to Quote 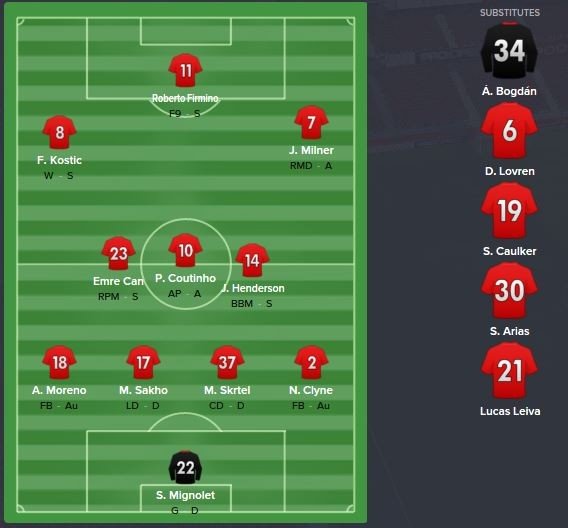 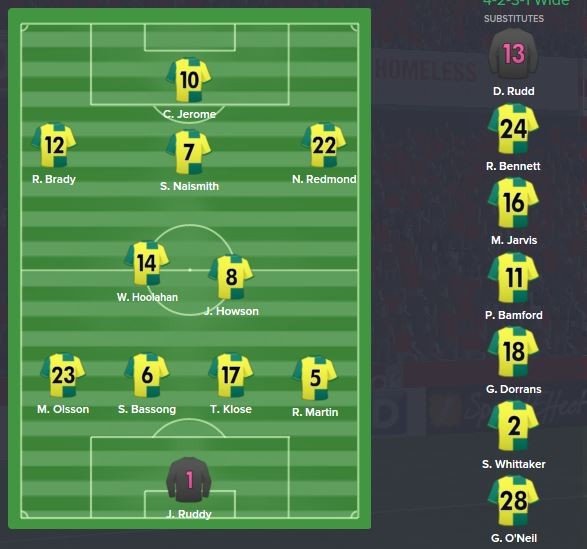 3 min- Can shoots Howson throws himself in front of the shot it falls to Roberto Firmino goal! Firmino tucks it in from a tight angle 1-0 LIVERPOOL

41 min- Firmino it still down but Liverpool keep on playing, Henderson through to Milner he shoots and it sneaks in at the near post Ruddy should of done better 2-0 LIVERPOOL

61 min- Naismith tries his luck from distance off the bar so close for the former Everton man.

Klopp's lineup was forced upon him as all of his strikers were out injured, this didn't seem the case in game as Firmino took his goal like any world class striker would, a neat finish from 7 yards out, Liverpool also showed again their ability of scoring early goals this time it was Roberto Firmino who scored in the 3rd minute. James Miilner added to his goal scoring tally by scoring a low driven shot his first goal this season not from a set piece. Belgian keeper Simon Mignolet also made a return to the first team and didn't really have much to do all game, it will do his confidence the world of good by keeping a clean sheet. Next game Liverpool face a trip to 16th placed Southampton who are suffering from a whole host of injuries to key players e.g. Pelle, Tadic and their main keeper Fraser Forster, this on paper looks like an easy game, but anything could happen.

Jordan Henderson Man of the Match
Login to Quote