mgriffin2012
6 years
I knew it! I knew you'd go up! Congratulations on the promotion mate!
1
Login to Quote

ninjaskill
6 years • Edited
Congrats on the promotion that I totally in no way saw coming.

C.J.Lippo
6 years
Mgriff, Ninja, Jack - You lot obviously had more faith in me then I did! Except you Ninja, I told you what happened 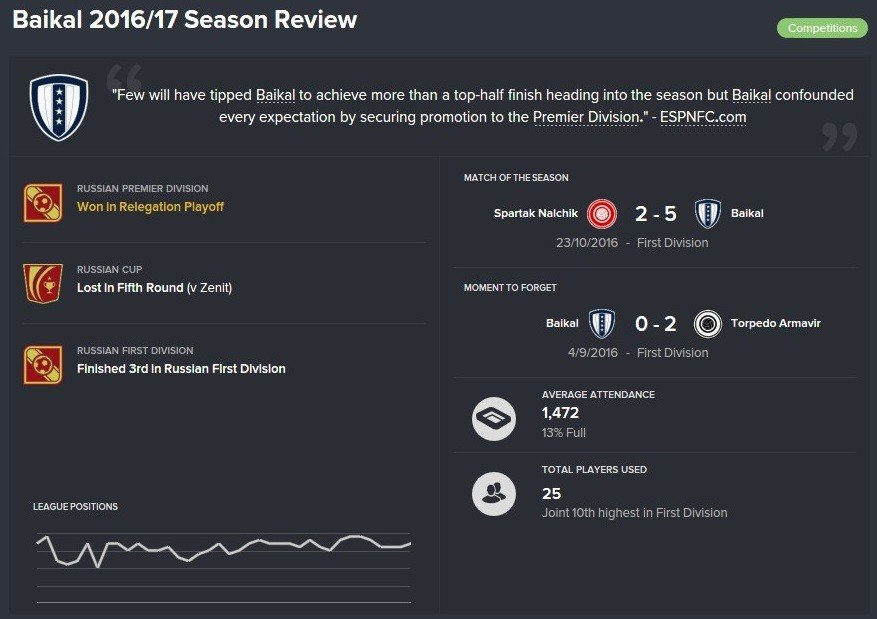 A sensational year, even if I do say so myself. Tipped for mid table mediocrity, the side performed admirably & even topped the table heading into the final stretch.

Of course, we did faulter a little in the closing stages but we bounced back marvelously to win a completely unexpected (by most) promotion. Now the hard work begins in earnest! 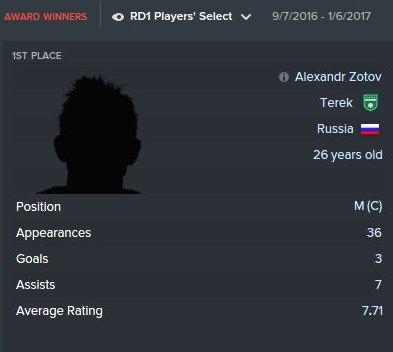 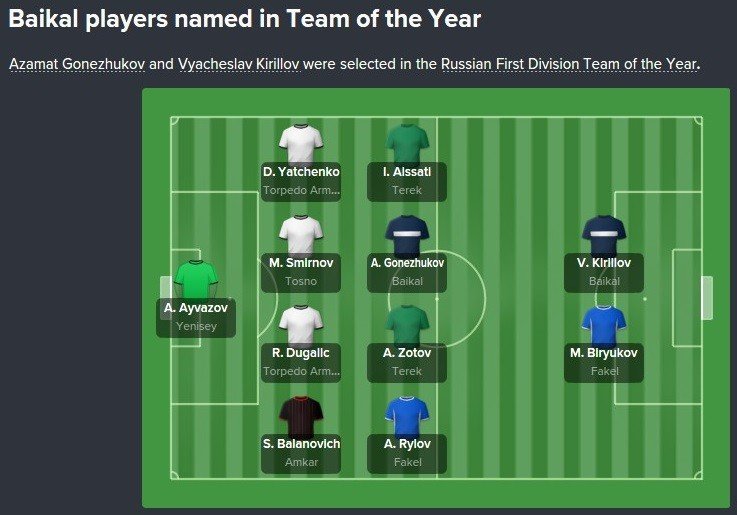 For the second year running, Azamat Gonezhukov is named in the first division team of the year, there can be little doubt the midfielder has earned his shot at top flight football next season.

Surprisingly, he is joined by Vyachaslav Kirillov who, although impressive when on the pitch, endured an injury ravaged season & will depart the club at the end of his contract.

Personally, I was voted 2nd in the manager of the year award behind Volgar manager, Yury Gazzaev, whose side was one of the few to finish the year strongly & gained automatic promotion as a result. 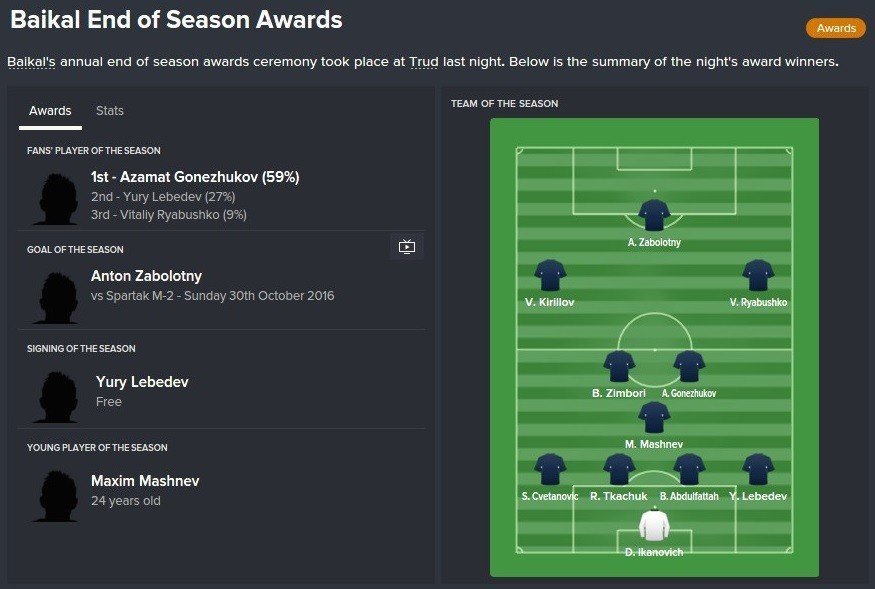 Once again Azamat Gonezhukov is named the fans player of the season, followed by signing of the year, fullback Yury Lebedev, while Maxim Mashnev is again voted youngster of the year.

Following another year of over achievement, I was afforded the honour of interviewing for the vacant Spartak Moscow position, an offer too good to turn down.

I felt the interview went quite well, although the Spartak chairman did voice his concerns over my icy relationship with the good folks in the media.

A week or so later I was informed that my application had been unsuccessful with Slaven Bilic the man they had chosen to lead the club forward.

A matter of days later, I once again committed my future to Baikal, signing a 2 year extension, although one way or another, our first year in the top flight may well be my last at the club.

I just had to throw this in there somewhere! The worlds gone mad, my game is broken, I demand a refund!

With precious little time before our assault on the top flight begins, the board were quick to let me know the kinds of numbers I'd be working with.

Initially I was quite happy with the figures however the realisation that the game wouldn't recognise our top flight status until well into preseason meant that any attempts to get some early business done was thwarted by the first divisions 625 p/w maximum contract cap.

Add to this the fact that convincing quality players to ply their trade in the harsh Siberian winters was going to be a very difficult task & the stage was set for an extremely frustrating window. More on that later though.

A short & quite frankly disappointing pre season as we struggled to compete with sides at least a rung below what we'll be facing in the Premier Division.

There were glimpses of what we can do though & with the majority of our new arrivals coming in only days before being thrown into the fray, there is cause for hope. Maybe. 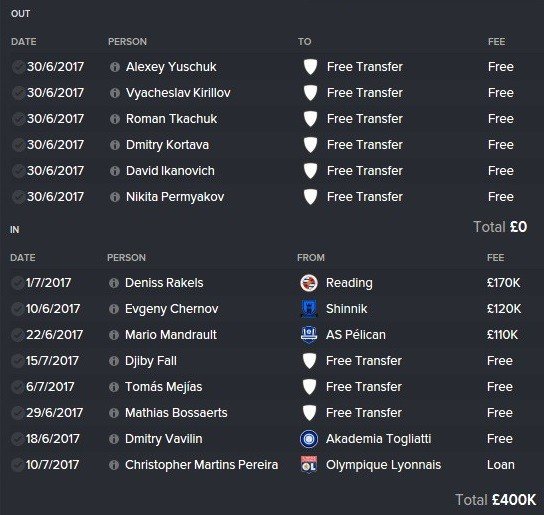 As I eluded to earlier, our attempts to strengthen the side ahead of the new campaign proved incredibly frustrating.

The first division wage cap was the first obstacle with a number of potential targets being snapped up before the club was afforded the opportunity to offer them a reasonable wage. A problem that was later compounded by our remaining targets refusal to enter negotiations or outrageous demands that at times resembled extorsion.

These factors, combined with the clubs reputation still resembling that of mid table first division club, meant we were unable to attract the quality of player that I had previously hoped too.

Still, we did what we could to improve the side with 6 players departing as their contacts ran out (including club stalwarts such as Alexei Yuschuk & Dimitri Kortava) & a total of 8 players arriving prior to the start of the season. Lets meet them shall we?

First up is former Reading fire cracker, & Latvian international, Deniss Rakels. Deniss joins for a fee of 170K in the hope of reviving a career that stagnated a little at the championship club.

With a high work rate & a solid enough all round game, I'm hopeful he will bag us some goals from the left side of midfield.

Nice looking defender who arrives from first division club, Shinnik for a fee of 120K. Hopefully he can compliment Lebedev on the right & help out with a few assists when going forward.

Potentially our best signing of the window, 18 year old Gabon international, Mario Mandrault, looks to have a very promising future. Still quite young, he already possesses all the tools to do plenty of damage in the league & plenty of time to improve even more. A very exciting addition!

Experienced, journeyman type striker who has played in a number of European top divisions, including a stint with Lokomotiv Moscow. Only in on a short term deal to provide competition for Mandrault & perhaps even teach the kid a thing or two.

Former Middlesborough keeper, who arrives in search of more first team football. He'll be my number 1 pick between the sticks & hopefully win us a point or 2 with some big saves.

Solid looking young defender stuck in the Manchester City reserve squad. Another arriving in search of regular first team football, which hopefully will help the highly rated youngster reach his full potential. Potentially a very nice pick up on a free.

One for the future, my scouts inform me this kid could have a very bright career. Shouldn't get near the first team too often this year & may even be sent out on loan.

Very talented Lyon prospect who, quite frankly, will walk into a starting midfield role here. Extremely composed & makes great decisions for someone so young.

I don't generally like to develop talent for other sides but I'll make an exception for Christopher, a star in the making! 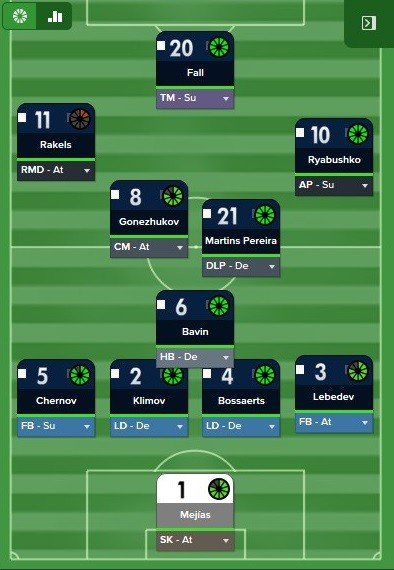 Not much expected of me, attempting to avoid relegation will be enough, like I'd intentionally aim for relegation?

Good thing too. The bookies rate us as 2000 to 1 outsiders, I've upset the odds before though so who's to say we cant do it again!? Anything is possible, right???

An incredibly tough opening to our first ever Premier Division campaign with trips to CSKA Moscow & Kuban, either side of our home opener against the side that could well have been my employers, Spartak Moscow.

To be honest, I think snatching a point from somewhere & not getting blown out everywhere else would be a decent start. Sounds reasonable enough doesn't it?

mgriffin2012
6 years
Mixed pre season and a really tough opening set of fixtures mate, but have faith!
1
Login to Quote

Griffo
6 years
Sorry I am late to the party, well done on promotion!
1
Login to Quote

C.J.Lippo
6 years
Mgriff - Couldn't of asked for a much tougher start but we'll see how we go

Jack - Yeah, hopefully he can be a rock at the back for us

Griffo - Thanks mate!
Login to Quote

PatrickLFC
6 years
The best part of that appointment is "The highly respected Moyes". Congrats on an incredible promotion!
1
Login to Quote

Justice
6 years
Massive games to kick off the season. It'll be no easy challenge, but I have faith that you can pull through!
Login to Quote

ninjaskill
6 years
Mandrault going from Gabon to Siberia has to he a bit of a climate shock. 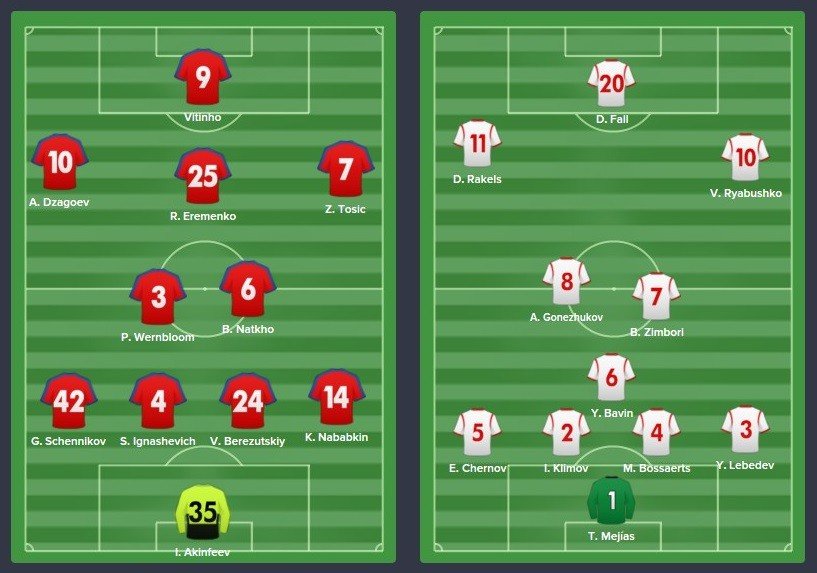 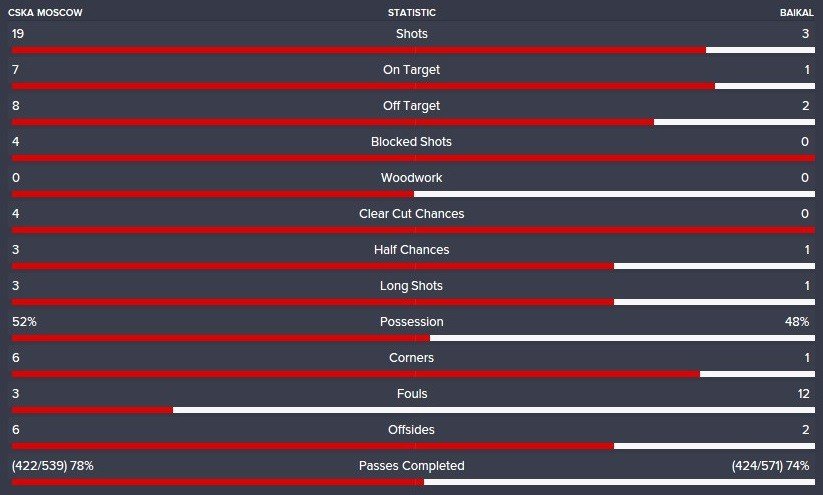 Just the small matter of a 10,000km+ round trip to Moscow to take on one of the best teams in the country to begin our season. Piece of piss, right? Well, not exactly.

We actually started the game quite brightly & up until Mathias Bossaerts gave away a penalty in the 22nd minute, we'd looked quite comfortable. Unfortunately, it was all downhill from there.

In what was a true baptism of fire, the day turned into a nightmare for our central defenders as Bossaerts gave away a penalty, his replacement, Abdulfattah, did likewise & our 3rd defender of the day managed to score an own goal in the closing stages. A day out to forget. Oh well, only 5,000km's & we're back at home. Break out the vodka, its going to be a long ride.

Well, that was tough. 3 games, 3 losses. 8 goals against, a big fat 0 for! I knew our start was going to be hard but Jesus, I'd hoped we'd at least be competitive! If this is a precursor of whats to come, its going to be a looooonnnngggggg year! 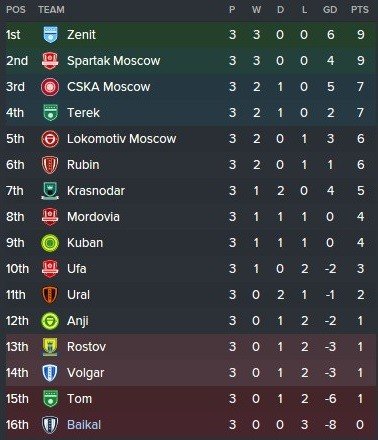 As you'd expect with a record like that, we're dead last & the only side not to take at least a point from the opening month. Not great reading but on the plus side, 2 points & we'd be out of the relegation zone! 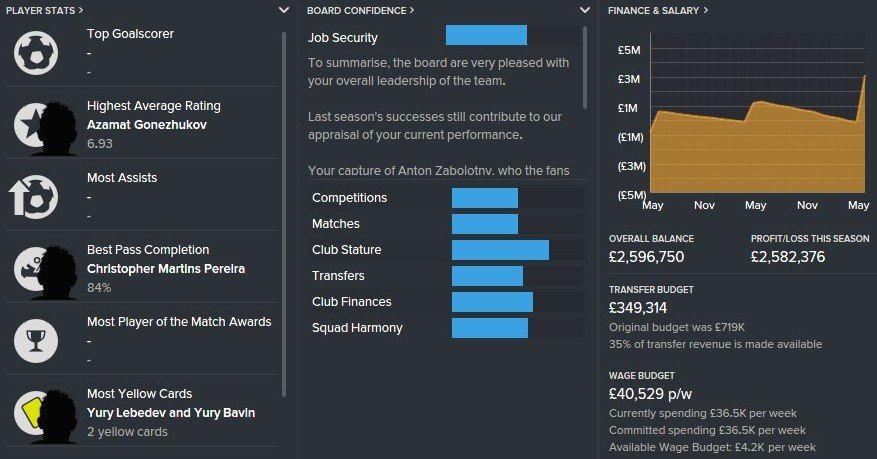 Once again, not much to see here. Gonezhukov tops our highest average ratings although at 6.93, its a little lower then it was in the first division. 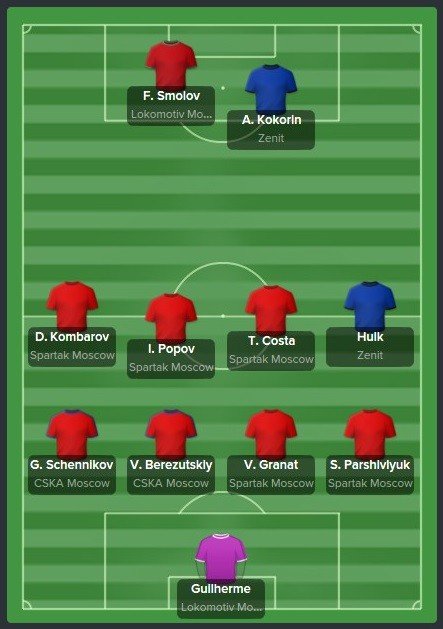 The incredible Hulk takes home the player of the month with 2 goals in 3 games, I'm sure it wont be his last award of the year. Unsurprisingly, we don't feature at all, moving on.

August shapes as a little less daunting for us, with 3 of our 4 games to be played at Trud. Our opponents as well, look far more palatable but with morale low after a disasterous start, winning our first points may prove harder then expected.

In all, I'd like to think we can grab our first win of the campaign & bank at least 4 points to help in our fight against relegation. Very achievable in my eyes, but we'll just have to wait & see.

Soze
6 years
Not the greatest of starts, hopefully you can turn it around and get some form going!
1
Login to Quote