Griffo
5 years
Queen's Park going up.. get around the amateurs, great job fighting relegation.. I have been through some of those tough seasons with Truro, stick with it and you will move up eventually I promise!
Login to Quote

mgriffin2012
5 years
Good luck with this mate! Edinburgh deserves a top team to rival Celtic and Rangers and if Hearts and Hibs aren't up for the task, hopefully you will be somewhere down the line!
Login to Quote

ScottT
5 years
For a small side like you I guess 9th isn't too bad!

Hopefully next season you can push forward a bit with the new takeover and then look to promotion in the years to come.
Login to Quote

Justice
5 years
Congratulations on securing safety! Hopefully the new owner backs you in the coming seasons.
Login to Quote

Balik
5 years
Congrats on safety! The 4th division in Scotland is always fun season(s) for me, hopefully that new money can get you up next season!
Login to Quote

Live For FM
5 years
congrats on safety
Login to Quote

2016-05-05 16:33#230839 Griffo : Queen's Park going up.. get around the amateurs, great job fighting relegation.. I have been through some of those tough seasons with Truro, stick with it and you will move up eventually I promise!

Yeah they're tough seasons to get through, not knowing where a win is coming from!

Thanks mate, it does! Some way down the line, hopefully...

Hopefully next season you can push forward a bit with the new takeover and then look to promotion in the years to come.

Its alright, at least we didn't get relegated. We can build on it and hopefully the takeover means we get some money!

Cheers! Hopefully he does, we'll see..

Thanks Balik, all the Scottish divisions are actually great fun to manage in!

Thanks mate.
Login to Quote

No major outgoings at the club this term, all players who left were those who I decided not to offer new contracts to given their lack of quality over the past season.

The new chairman had actually given us some money to spend, and by some I mean a very very small amount. However, it was enough to bring in some improvements to the squad. The most notable incoming was the arrival of young striker Lewis MacPherson from Dundee United for £2,000. Jamie Henry, formerly of Aberdeen, arrived for free from Keith to provide us with a playmaker in midfield. Tommy Wright and Ben Priest came in to bolster our defence ahead of the new season while Andrew MacAskill was an addition aimed at providing some protection to the back four. Ryan Frances was one for the future and would be playing primarily for the under 20s, along with Jack Downie. 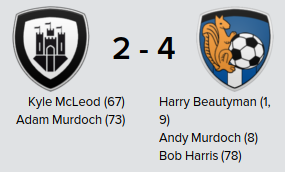 We would again be knocked out of the Challenge Cup early on as we were drawn against Championship opposition in Kilmarnock. They had just been relegated from the Premier League and exerted their dominance early on by racing into a 3-0 lead inside 10 minutes. A few tactical tweaks on my behalf changed completely the course of the rest of the game as we pulled 2 goals back before Bob Harris halted our comeback by netting from close range in the 78th minute. It would finish 4-2 and despite the result, I felt we had played well and was becoming quietly confident going into the league season. 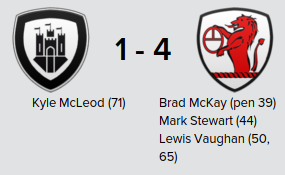 It would be a Championship side who would knock us out of the League Cup too as we faced a very strong Raith Rovers side. We never really got going and the game went the way it was predicted to as Raith Rovers left Edinburgh with a 4-1 win and a place in the next round.

Despite my intentions to play Jack Downie in the under 20s, he came into the first team for this Scottish Cup tie against League 2 counterparts Montrose and netted the only goal of the game to ensure a 1-0 victory.

We faced another League 2 side in the 3rd Round as we welcomed newly promoted Cove Rangers to Meadowbank Stadium. Steven Davidson would score the only goal of the game to again give us a 1-0 victory and see us progress to the 4th Round.

The 4th Round would see us face yet another Championship side and it wouldn’t be 3rd time lucky as we would be knocked out after a 2-0 defeat. We didn’t deserve much more from the game and weren’t expected to be any more than the losing side.

Upon the arrival of the new year we had started well in the league having lost just 5 games. However we had drawn quite a few and on occasions had struggled to put the ball in the back of the net. 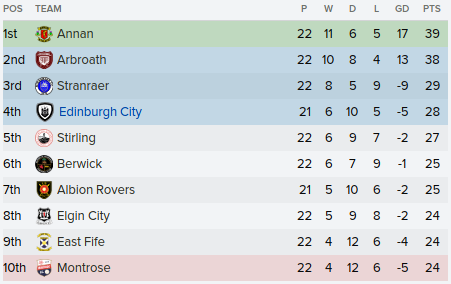 Those results meant that at the turn of the year we were currently in 4th place, which would give us a place in the play-offs. It had been a good start and with a game in hand which could potentially see us rise to 3rd we had something to hold onto, but could we?

Our remaining fixtures would see us go on a very bad run losing 5 games in a row. Form did however pick back up towards the end of the season, but was it enough to hold onto our play-off place? 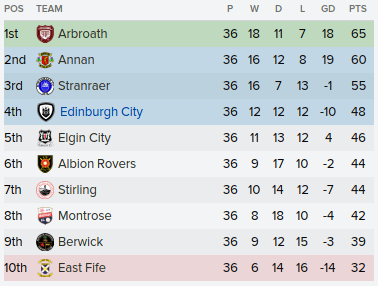 Despite the 5 consecutive losses, we managed to hold onto our play-off place by the skin of our teeth finishing 2 points ahead of 5th placed Elgin City. 7 points behind 3rd placed Stranraer however, was a consequence of our poor form. Nonetheless, we would be going into the play-offs with a chance of promotion to League 1!!

The Semi-Final would see us face Clyde, who had finished second bottom of League 1, over two legs. The first leg would be played at home in a game which can be described as ‘one of those games’. We dominated possession and had the better chances over the course of the 90 minutes, but came out empty and lost through a 90th minute winner from Gavin Swankie.

The second leg in Clyde would be a tough game and we knew it would be, we didn’t dominate like we did in the first leg however Steven Davidson would manage to score in the 35th minute to give us the lead on the day and make it all square on aggregate. The game would finish 1-0 and went all the way to a penalty shootout in which we were victorious!

The first leg would again be at home, and we would again lose 1-0. Rabin Omar’s 68th minute strike would prove enough for Annan on the day as we would struggle to break down their defence. A big second leg was ahead in which we needed to win to get promotion to League 1. 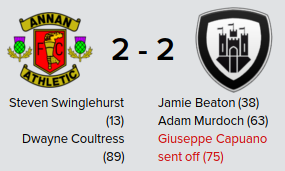 Could it have been any more cruel? After coming from behind to lead 2-1 going into the final 10 minutes it looked like the tie would be going to extra time. Dwayne Coultress had other ideas however as he netted an 89th minute equaliser to crush any hope we had of promotion this season. 2-2 on the day and 3-2 on aggregate, we were out of the play-offs. I can’t help but think that Capuano’s red card was the turning point of the game and had he kept his cool, we might’ve been able to hold on.

Play-Off heartbreak at its finest. We came through a very tricky tie against Clyde, only to have our dreams crushed with 1 minute left to play of the final.

No promotion this season however it had showed us capable of finishing higher in the table.

Heartbreak in the end, but we will come back stronger.
Login to Quote

mgriffin2012
5 years
Unlucky not to have been promoted but what doesnt kill you makes you stronger and next year will be your year! Believe!
Login to Quote

Live For FM
5 years
too many draws here and there cost you the title.... but unlucky on the play-off match
Login to Quote

Justice
5 years
Ahhh that's unfortunate, but you've made so much progress to date!
Login to Quote

but I'm sure you'll be a top contender next year.
Login to Quote

Unlucky indeed, Annan had been a side I couldn't beat all season, play-offs were no different. Hopefully it is!

Yeah I agree, struggling to score goals with good defending meant we couldn't really get infront!

Very! We have though you're right, more progress to be made..

but I'm sure you'll be a top contender next year.

Very, so would I have been to be honest. We may have struggled to stay up had we got promoted so could be a blessing in disguise. Lets hope so

You are reading "Edinburgh City - The Citizens Journey".