Griffo At first I only had like 3 guys haha

Jack I just hope they are good lol
Login to Quote

CS Baile Átha Cliath released the club's inaugural 30-match regular season league schedule on Tuesday, following the official announcement from the League of Ireland. CS Átha Cliath will start their inaugural season on Saturday, 8 August,officially open their doors at Parnell Park with the home opener against C.D. United, the match is set for a 7:30PM kickoff.

The senior team will play a total of 36 league matches between 8 August and 30 April. Depending on the way the season goes there could be a chance at extending it two more matches in the playoff for promotion against the ninth placed League one club. To be considered for that Átha Cliath will need to finish between second and fourth place. We will be facing each team a total of four times.

Átha Cliath will also participate in three cup matches. They are the FAI Cup, League of Ireland Cup and the Intermediate Cup. We enter the Intermediate Cup First Round of 25 July, LoI Cup on 1 August and the Second Round of the FAI Cup on 24 October. Please stay tuned to our website to find out who and where we will be facing in each competition.

For season member packages or group tickets, visit http://www.dublingaa.ie/ or call the Parnell Park box office at 01-6797431. Single match tickets can be purchased from selected Centra, Supervalu and other outlets. 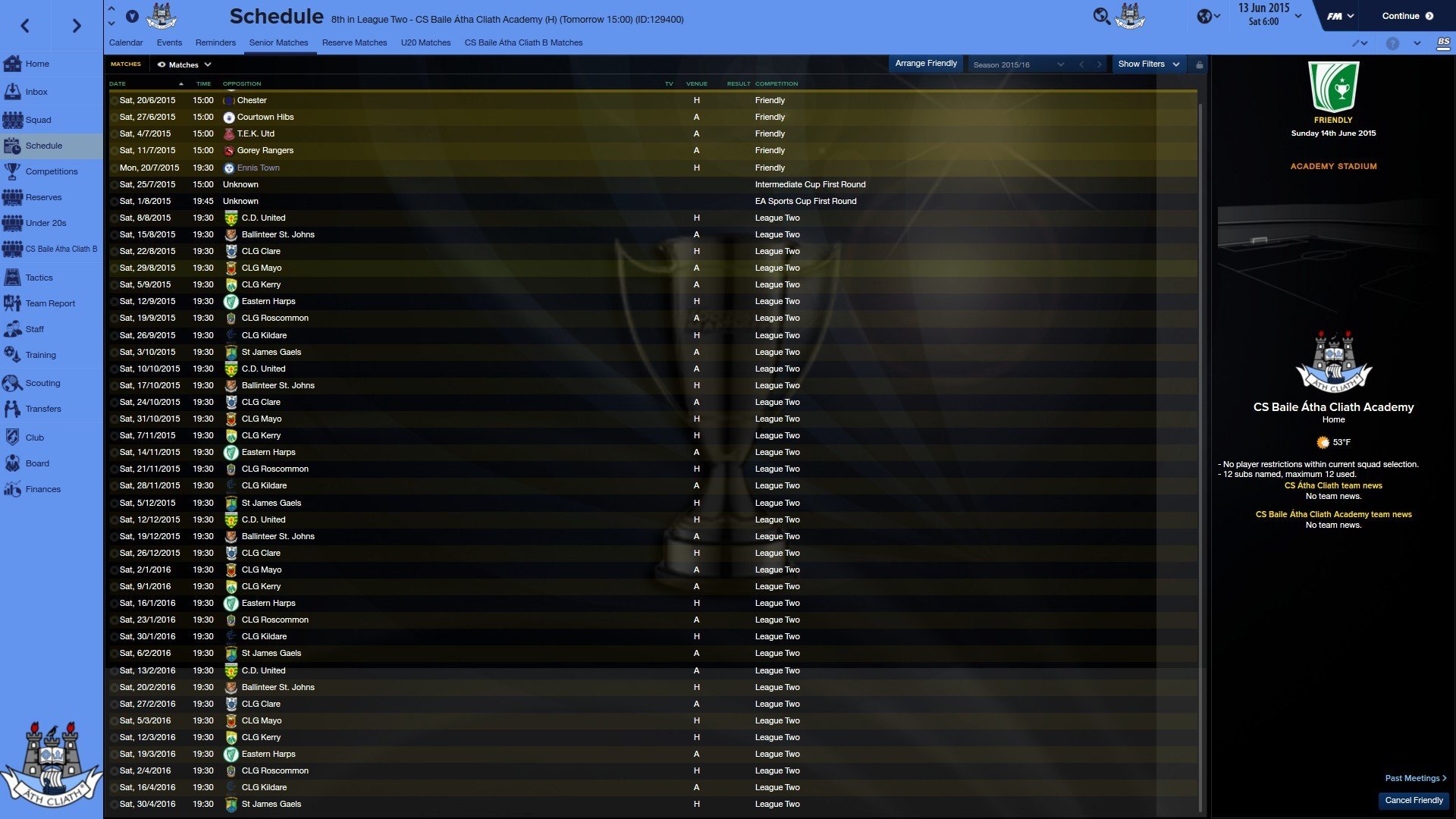 Jack
6 years
Should be an exciting first season


Finally today is the first day of training camp. These last few months preparing for everything has been really time consuming and now that today we open things up I am happy. I have decided that we will have a week long two a day training camp so that they guys will get in match shape and also get to understand how things work like tactics and all of that.

The first thing I did was to introduce myself and have the team go around and do the same. Since this is a new club everyone here most likely has never played together I felt that team building exercises are the key for now. They seem really happy and when I told them I have no expectations other than not getting bottom of the league they seemed very pleased. 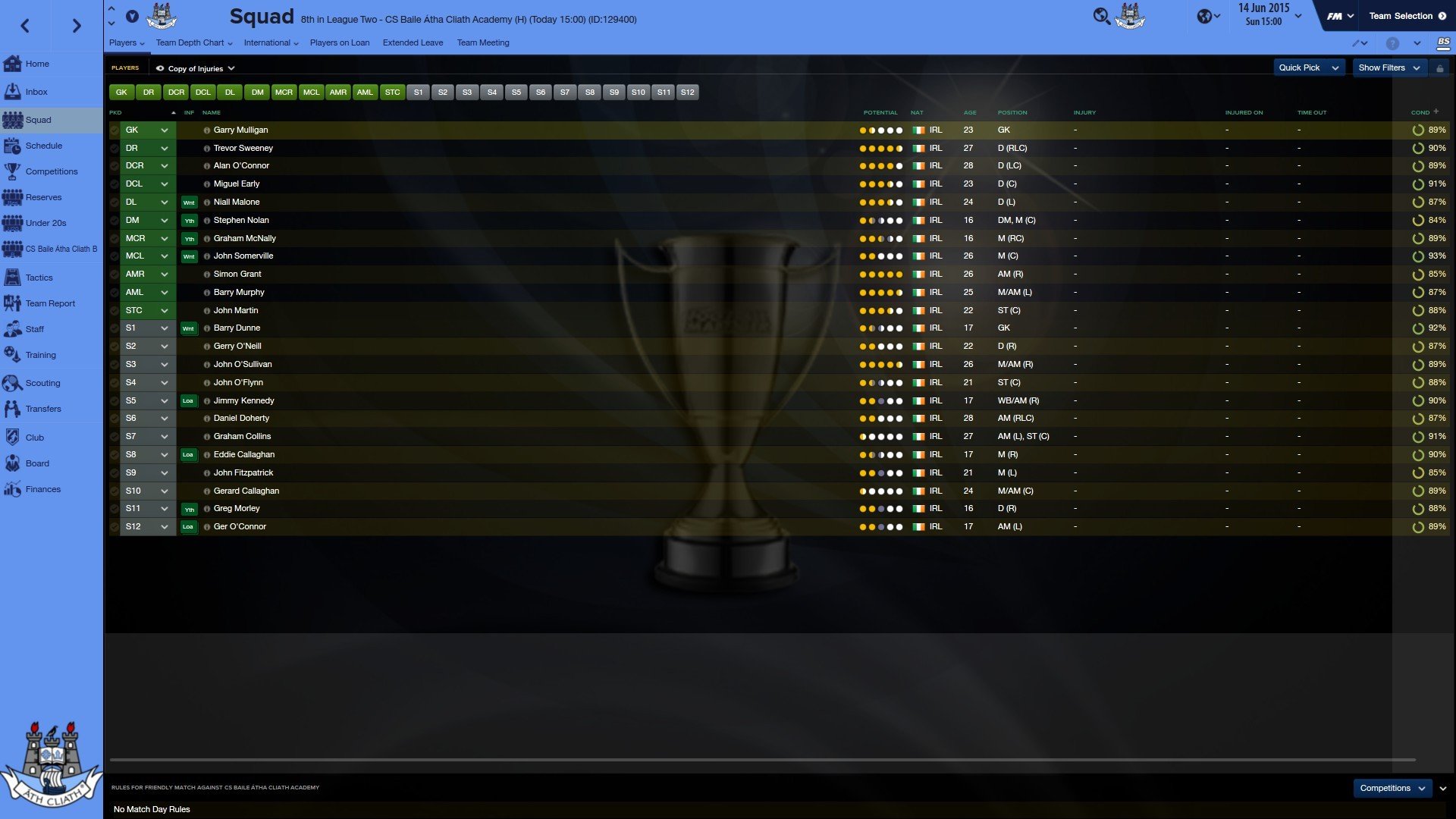 After introductions and club stuff I had the guys go out for their physicals and fitness test. In the evening we planned to have a little scrimmage so that I can see how everyone plays together. I told them there is no pressure as today is just to get the guys on the field.

While they were doing testing I consulted with my staff to see who the best players are and I was given three names.

Simon Grant- Winger
Simon looks to be one of if not our best players on the squad. Despite his age of 28 he has a lot still going for him especially since this is his first club. The speedy winger is said that be one of the best players in all of Ireland. I wonder why nobody picked him up beforehand? 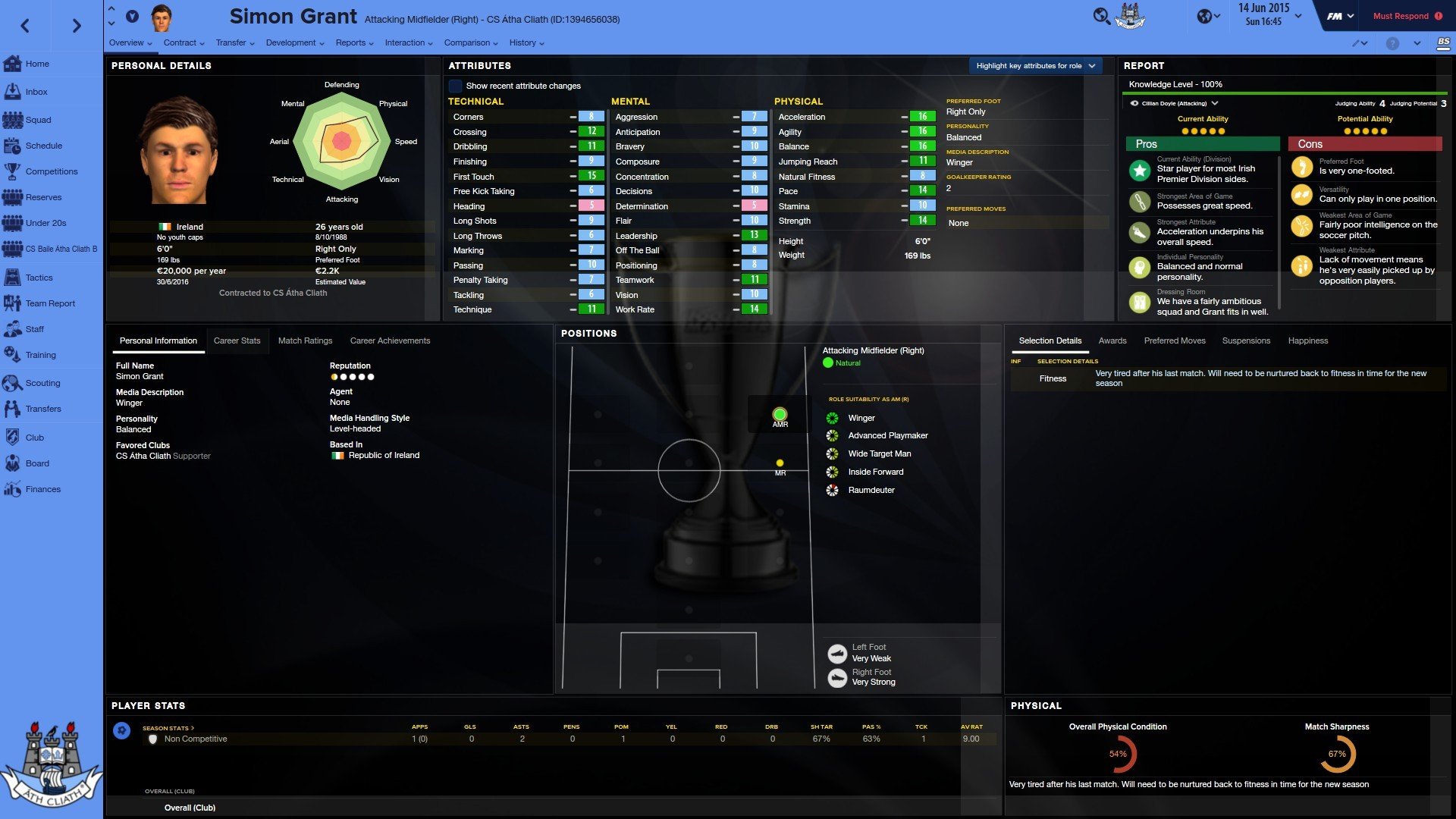 Barry Murphy-Winger
Another winger who I can see as a top player. Just like Grant he is amazingly fast and will be one of our top players. I can’t wait to see how Grant and Murphy work together. This should be a very exciting partnership on the wing 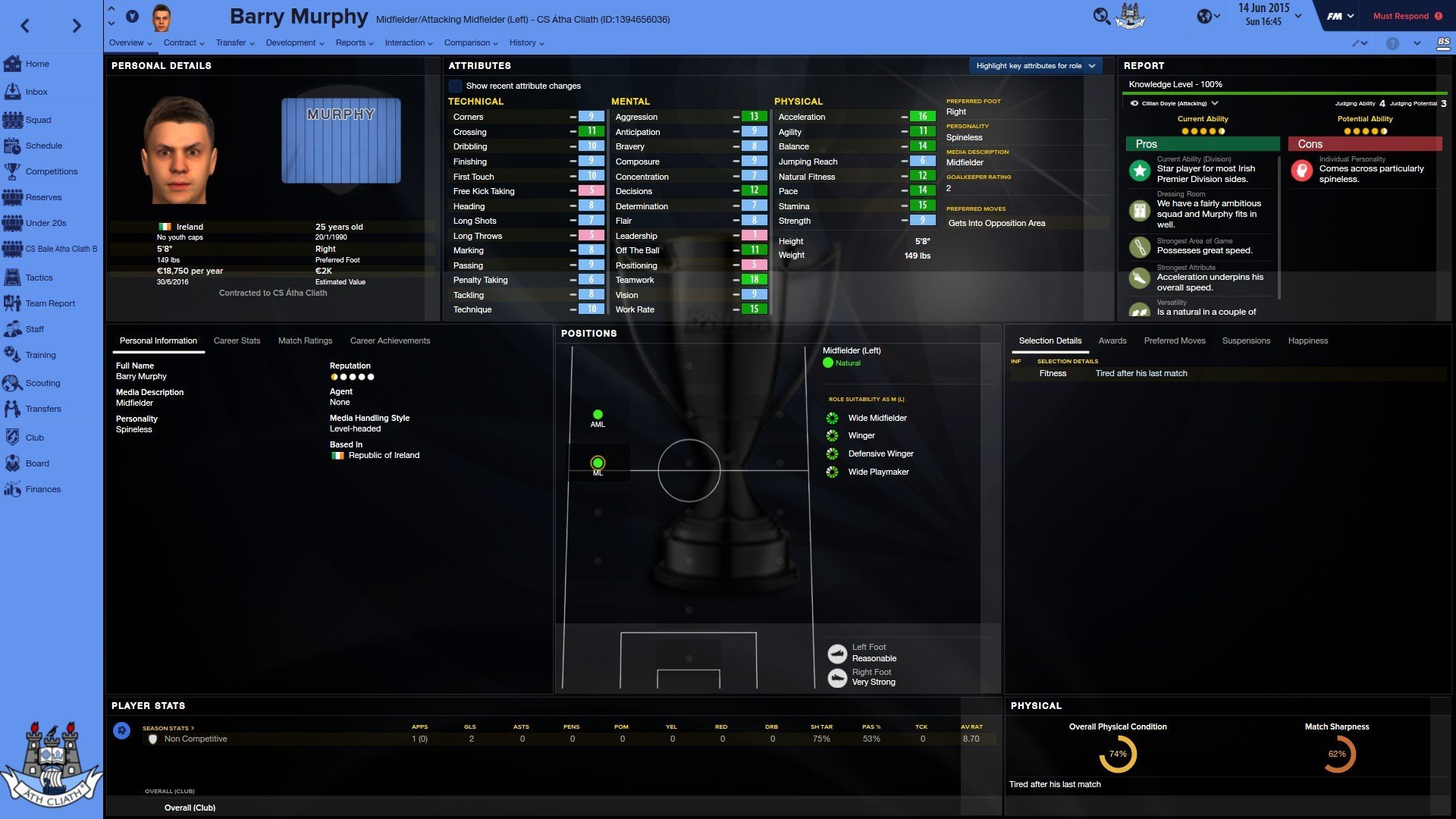 Trevor Sweeney- Defender
Trevor is the type of defender that all coaches want. One that can play all defensive roles, I find that to be awesome since he can be on the wings or in the center. I have a feeling out of all of our player he will become a cult hero. I don’t know why, maybe it is the hair haha. 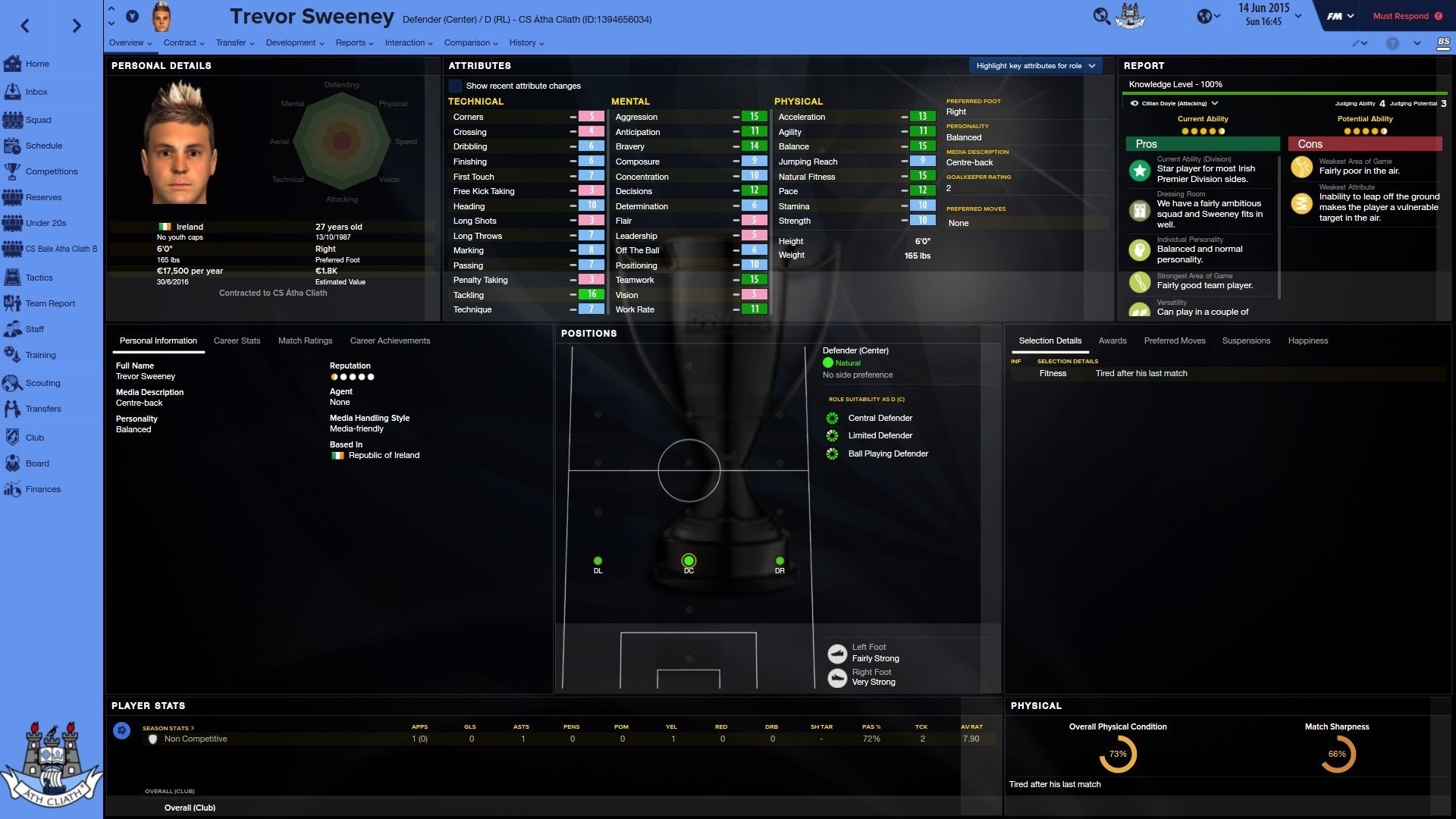 After the physicals and fitness test it was time for our first scrimmage. I set up our senior team against the academy. Well I was thinking it would be a blow out but somehow it was a very exciting match as the final score was 3-3. The best player of the night was Barry (Murphy) who had scored two goals for the senior team. The youth really impressed me being able to be very competitive against many older players.

With that the first day comes to a close. It was a very productive and successful first day together as a club. Next up is our first competitive match, a friendly against English side Chester FC.
Login to Quote

Jack
6 years
Some talented players in there! And that is a gorgeous skin 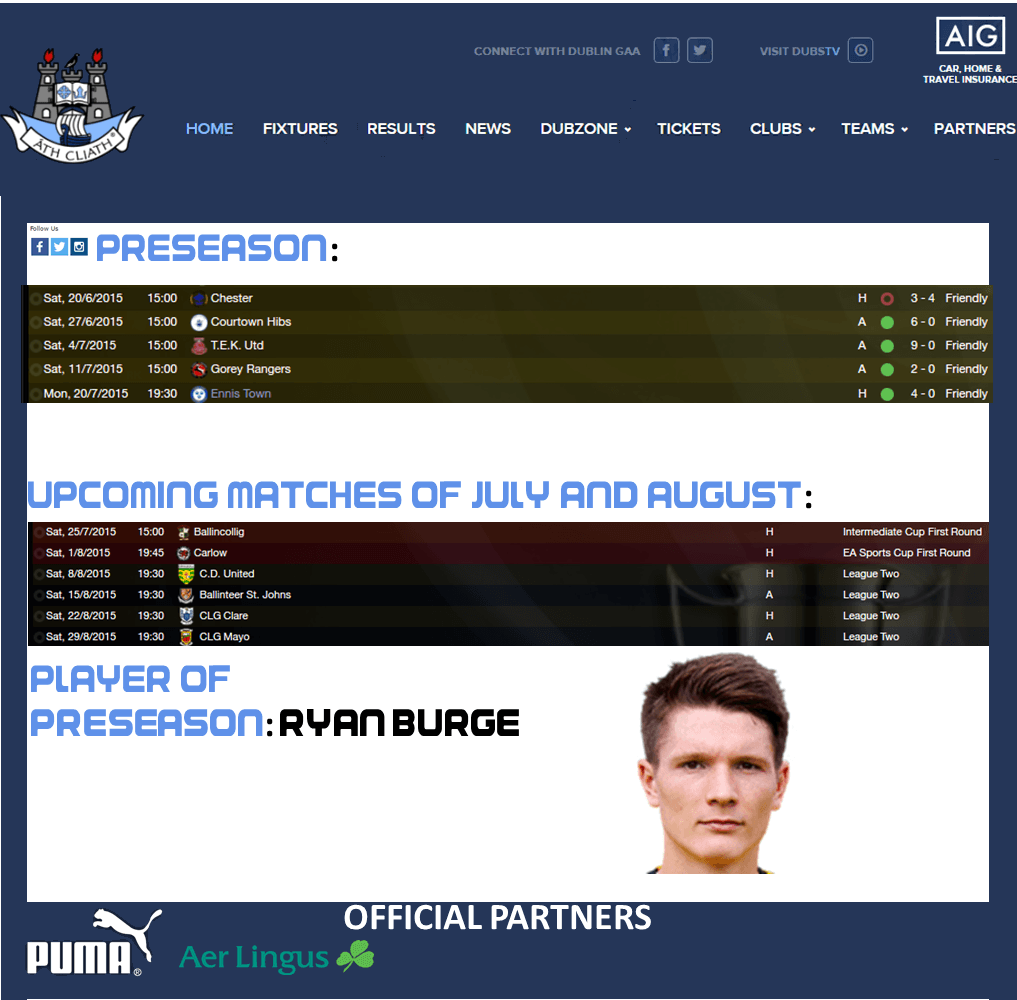 
Michael O'Leary:This was an excellent preseason and i am glad it is over as we now embark on the season. I knew we would have a good showing in the five matches but I had no clue that it would be that good. Even that loss to Chester surprised me a bit as we almost pulled it out.

I was really impressed with Ryan Burge who had an amazing preseason. I knew when signing him he would be one of the best players but to be honest I had no clue he would get so hot so fast. Hopefully Ryan can continue this in the season.

Finally I am pleased with the two draws for both the League of Ireland Cup and Intermediate Cup. After the showing during preseason I feel we can win both and move on to the next round. Who knows though that is the beauty of cup matches. I am also excited to get the league season rolling in a few weeks.


Patrick Lynch:I was very happy to see how Michael was able to get the club ready for the season. It took a lot of hard work and I am proud of the fact that he was able to assemble a squad the quality it is in such a short time. If I was a betting man I would say that we have a chance to win the league. Well I hope Michael and the rest of the Dubs can have a great start in cup and league play.

It was a historic night for CS Baile Átha Cliath as Michael O'Leary and his crew competed in their first ever competitive match. In front of 1,415 spectators the Dubs faced League One side Ballincollig in the opening round of the Intermediate Cup.

Striker Brian O'Brien scored the clubs first competitive goal during the 7th minute to give us the 1-0. Lead this was a very special moment for him and the club, after the goal the ball was given to the equipment manager so that it can be preserved due to it's historic nature.

Later on The Dubs keep the pressure on the visitors and they could not answer. In the 38th minute winger Barry Murphy added the clubs second goal. Luckily for Ballincollig they were able to keep the score low as it seemed every few possessions we would attempt a shot on goal. It wasn't until the 61st minute when O'Brien scored his second goal that the match was officially out of hand.

"This was a very special day for me and this club, after all the hard work of the past year getting this club ready for the season, I am happy that our first competitive match was a success. Brian (O'Brien) played amazingly and with out him this match would have been closer."- Michael O'Leary

The Dubs will now be moving onto the second round of the competition where they will be facing Championship side Shelbourne. The match is set of a 7:30?PM kick off on 18 August at Parnell Park.

CSBAC return to action on 1 August to face Carlow in the EA Sports Cup first round. The match is set for a 7:45 kickoff at Parnell Park. 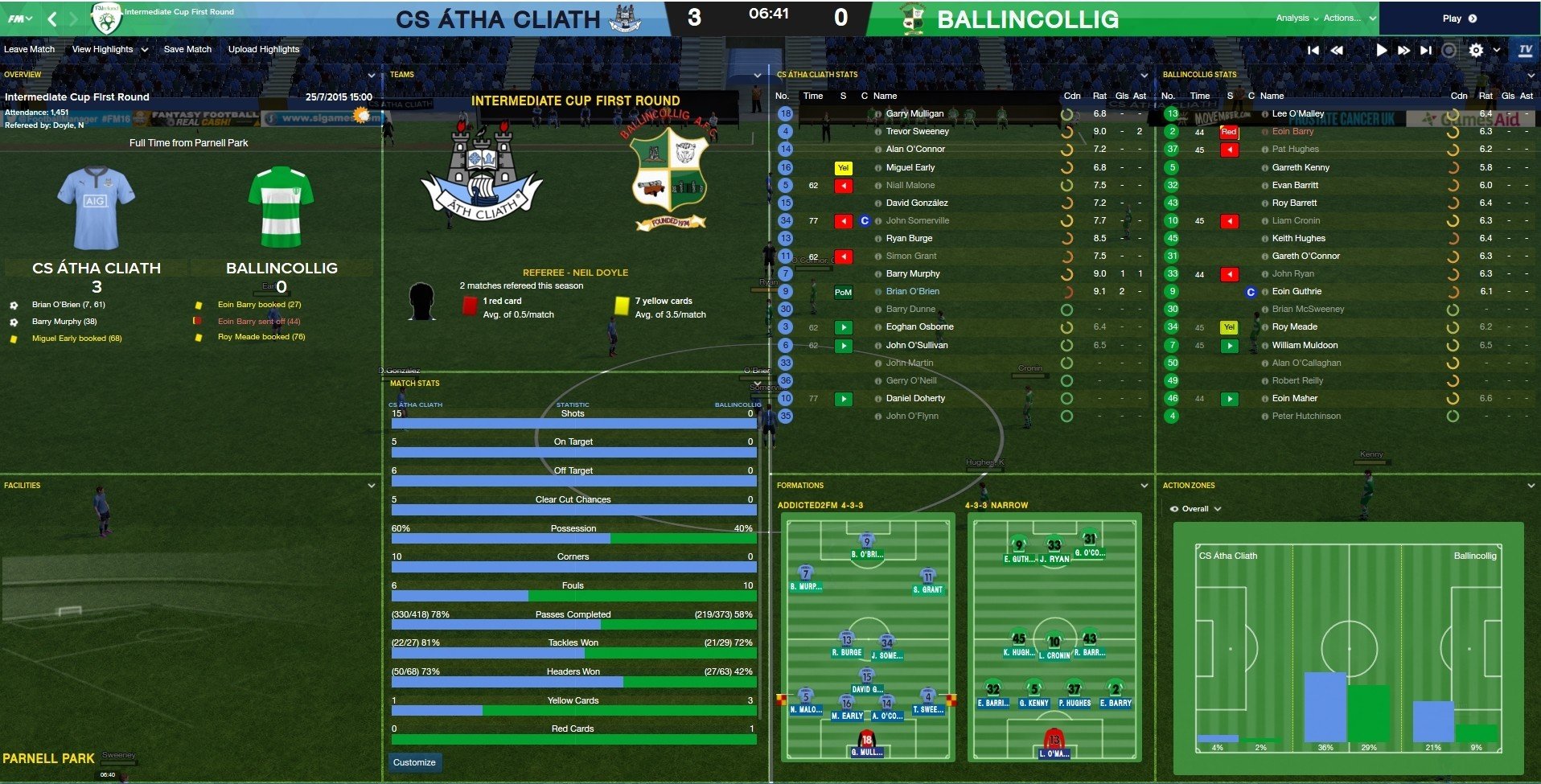 It was a busy first transfer window for manager Michael O"Leary as he looked to improve the squad for this season. During this window he looked for a mixture of youth and experience to the team. Below are the transfers that occurred as well as a few notable signings from the window. 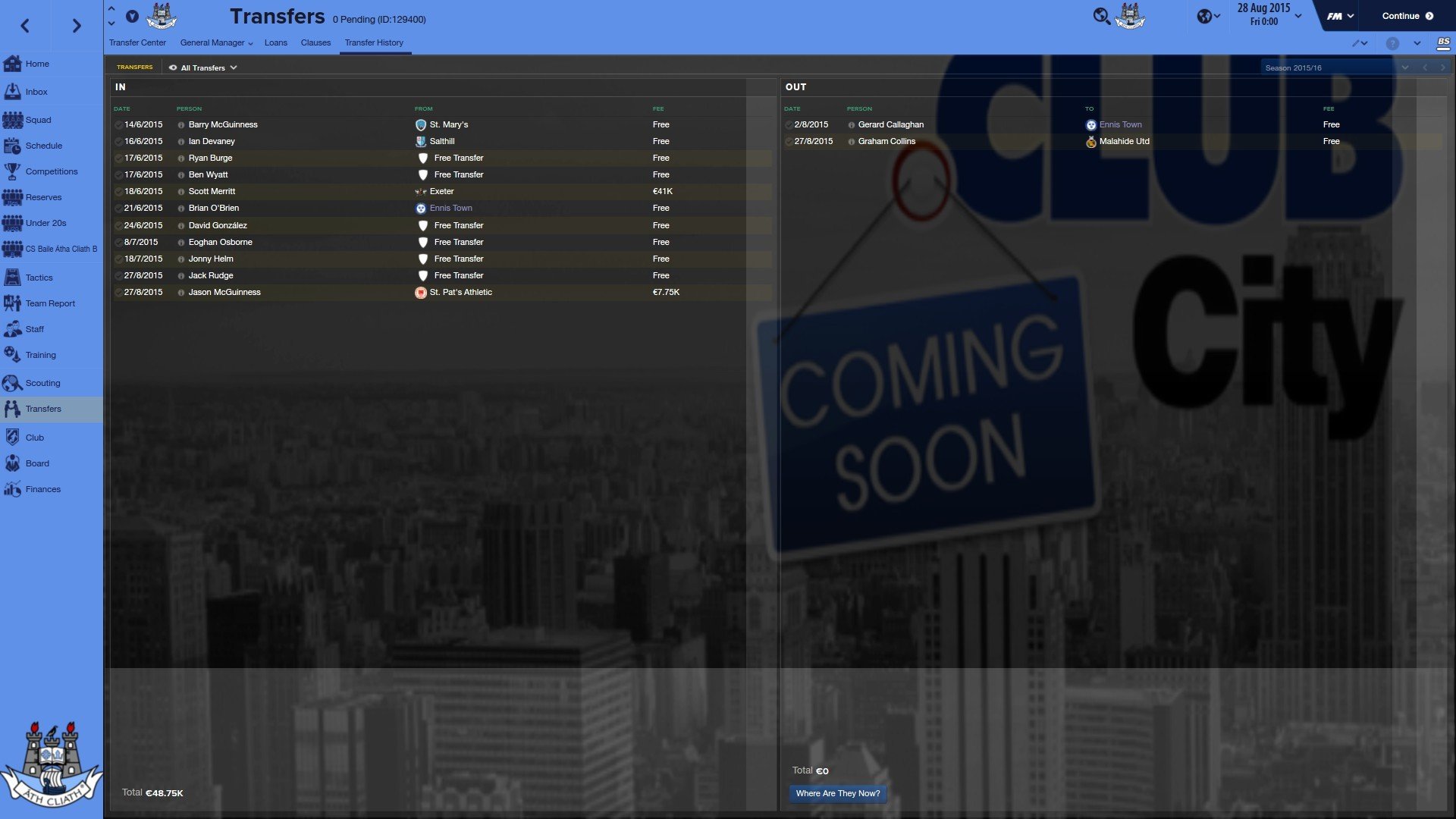 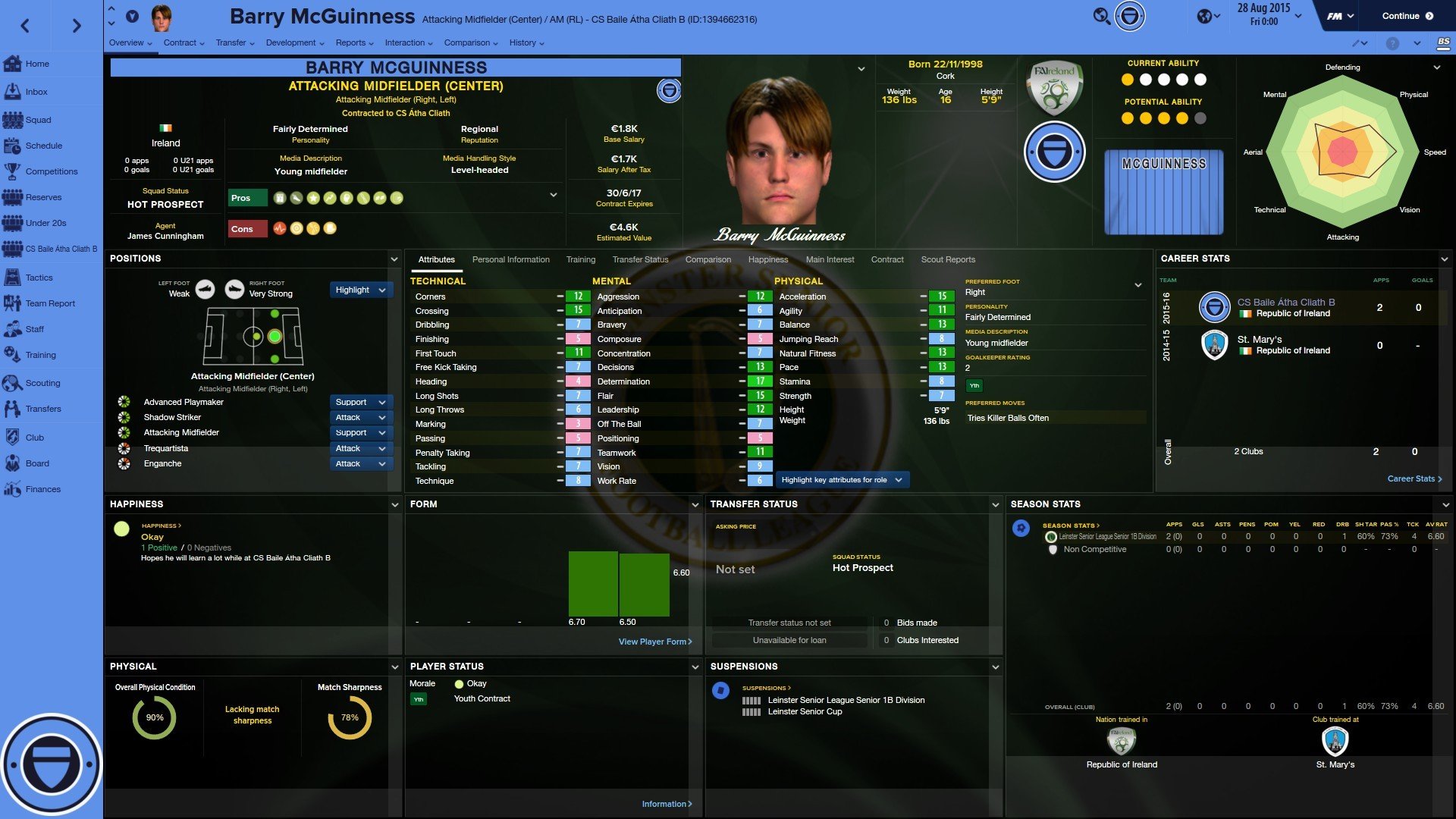 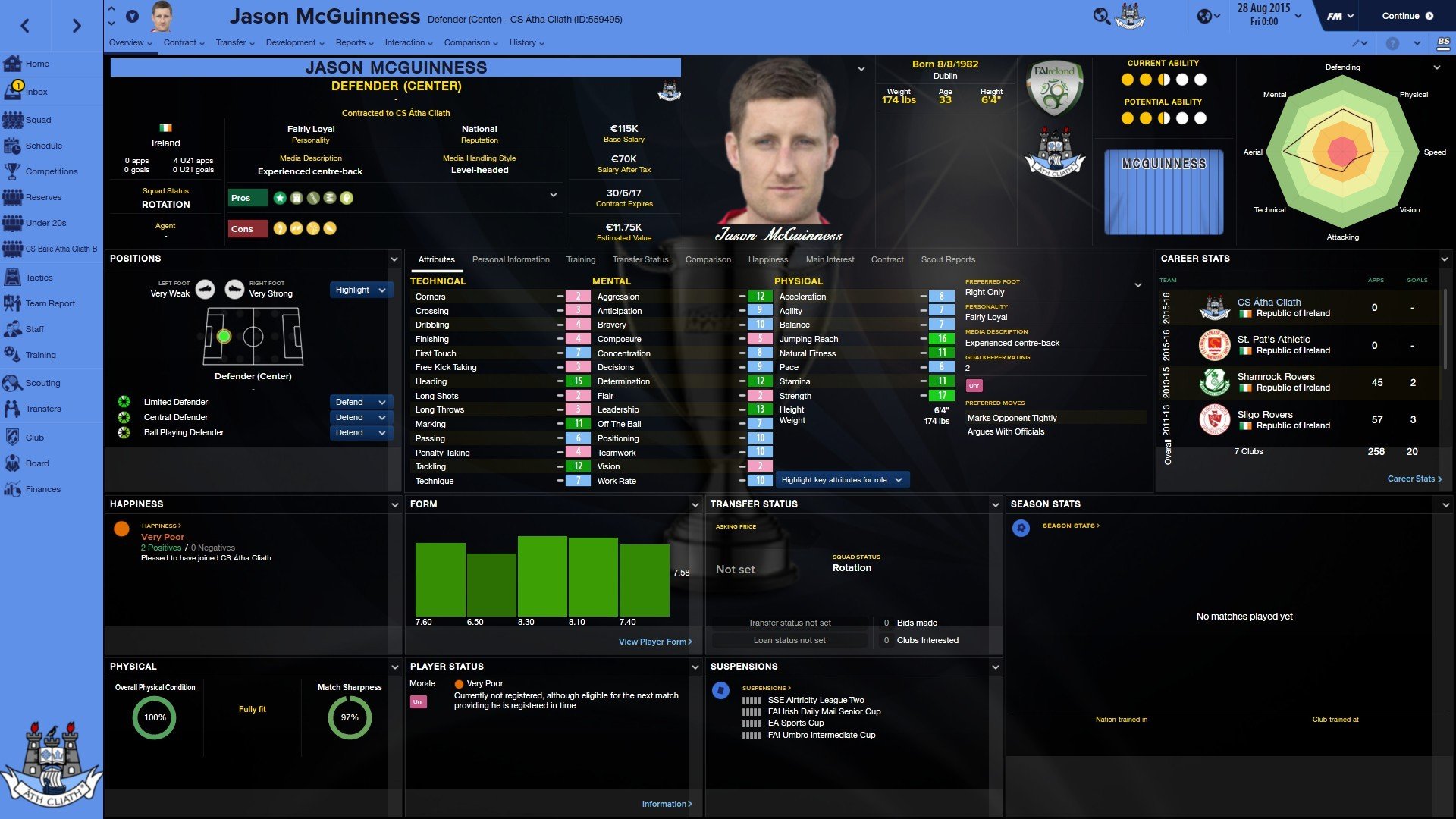 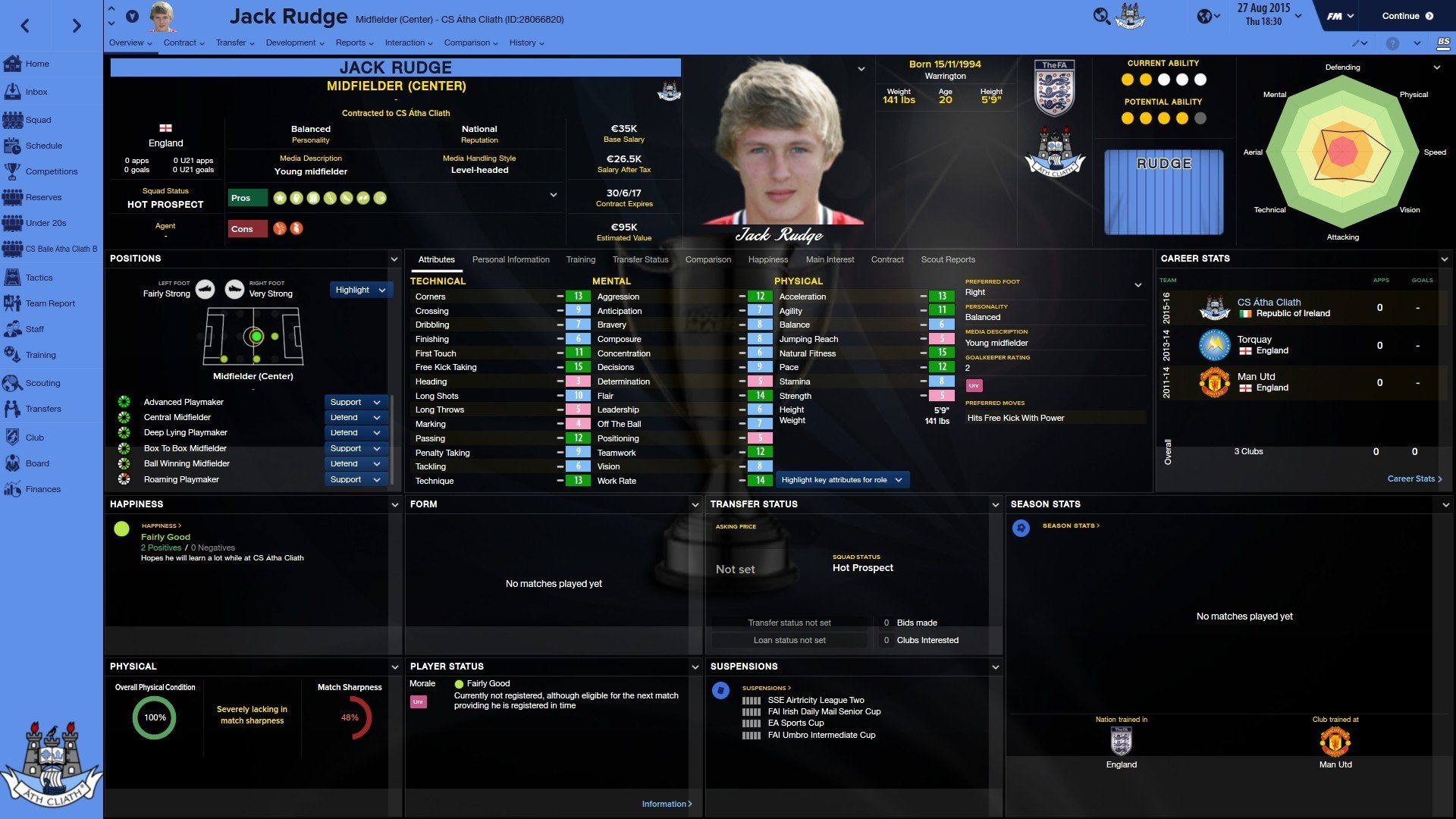 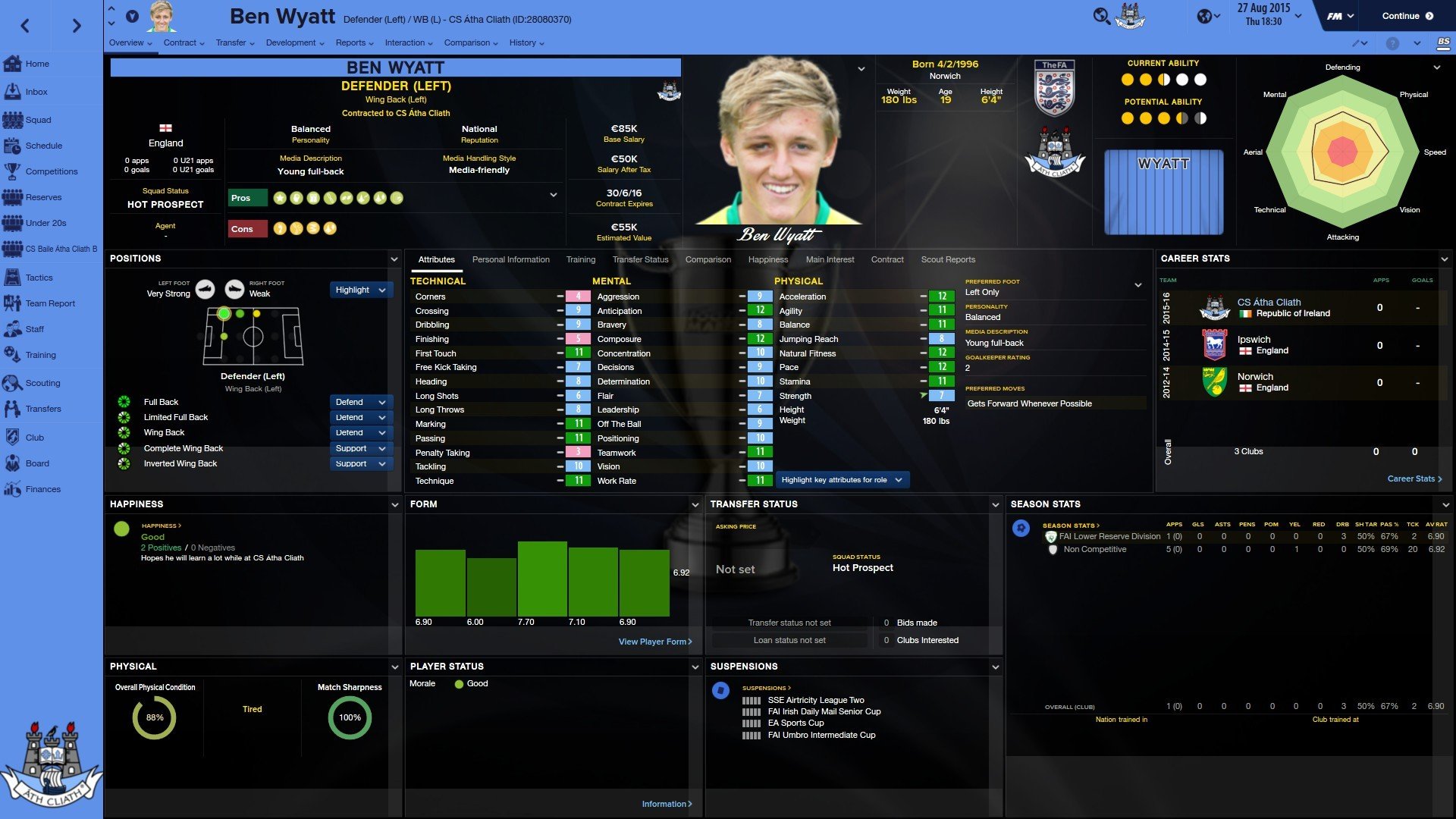 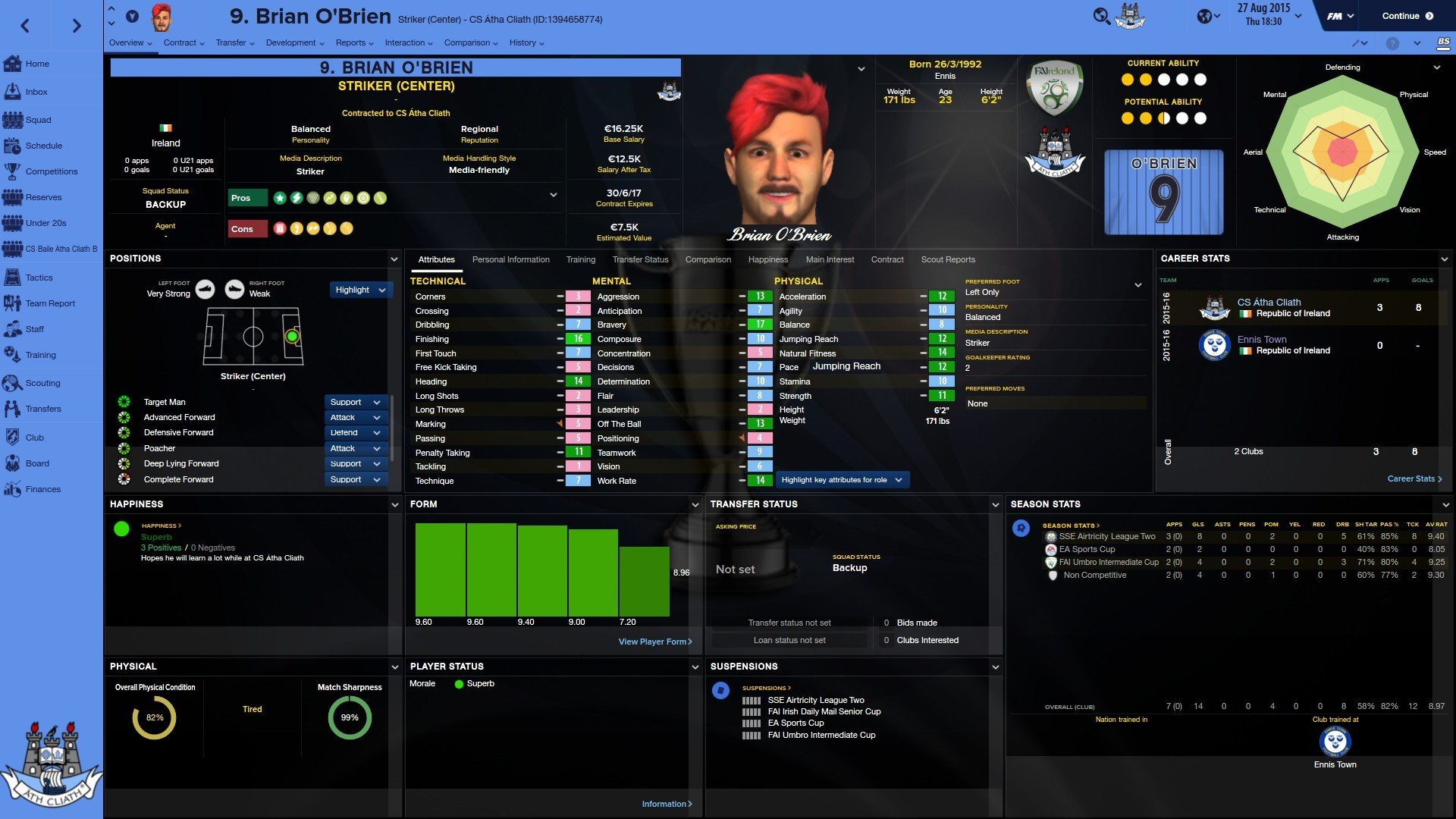 C.J.Lippo
6 years
Where have I been? Didn't even see this start! Ive got some catching up to do!
Login to Quote 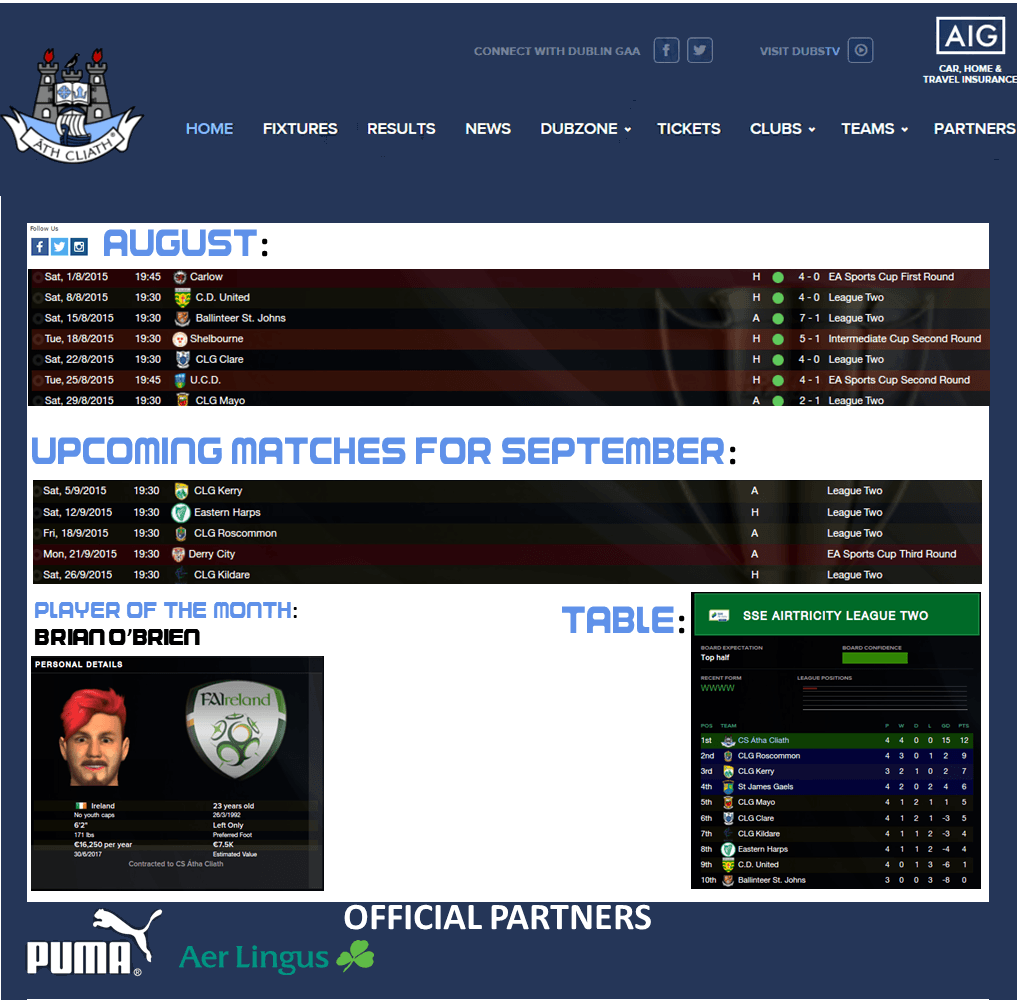 The first full month of the season has been incredible. I could not ask for anything better and this team is starting to do something very special. If you asked me before the season started we would be in this spot after the first full month, I would have thought you were full of shit.

What I found the most insane is that through four league games is that we have only allowed two goals to go past us in league play. I can't believe how good Garry (Mulligan) has been for us. To be honest I was looking for a keeper during the transfer window as he wasn't that good but he has proved me wrong. I hope that he can continue this in September.

There were several matches this month that had impressed me and I would like to recap a few here real fast. The first was a 7-1 victory over Ballinteer St. Johns. I feel sorry for those guys as they are in last place and are just so horrible. I was shocked at how good we were. The other match I want to talk about was from our HUGE upset over U.C.D. in the EA Sports Cup Second Round. Holy crap we destroyed them 4-1 and that was not a scoreline I was expecting.

The person who I feel was the most responsible for this month was striker Brian O'Brien. This guy is something special and I would not be surprised to see higher division or English clubs come calling. In all matches this month he scored 12 goals. I can't believe I found this guy in the Clare Premier Division.

Finally September will be a nice month with four league matches and a cup match. I am circling the cup match against Derry City as our big match of the month. This is in the Second Round of the EA Sports Cup and it will go one of two ways, a big upset or a beating by them. I really don't know what will happen but I hope it is not a beat down.
Login to Quote

Soze
6 years
Brian O'Brien is dazzling the opposition with that hairstyle!
Login to Quote

ninjaskill
6 years
So a decent start then. Keep up the good form
Login to Quote