MJK46
6 years
Soze I think that is the reason

Ninja Thanks
Login to Quote For the visitors from Dublin this was a match that seemed could go in their favor or totally against them. In their first match against a Premiership club manager Michael O’Leary was hoping for some sort of positive in the match. Sadly that did not happen as his club went down 2-0 and are now eliminated from the competition.

Despite the score line the Dubs had keep it close all match long with several chances all 90 minutes long. It just was not their day on the pitch as two big mistakes had caused the club to lose.

This match also saw that there is still a huge divide in the quality of play between the qualities of clubs in the country. It will be awhile until someone from the lower divisions will have a shot at upsetting the top 12 teams of the Premiership.

In both cases the Candystripers were awarded penalties due to two different occurrences of tripping inside the box. The first occurred early on in the 5th minute and the final one came late in the 85th. It seemed like nerves were the biggest obstacle and opponent for the League Two side today.

With that victory Derry City now advance to the quarterfinal. For CS Átha Cliath they will now will focus on other companions. OlleM13
6 years
Interesting save, with more action to come

mgriffin2012
6 years
Some good results here mate, a bright future ahead I think!
Login to Quote

Justice
6 years
Well, it was to be expected. Derry City are a fantastic side.
Login to Quote 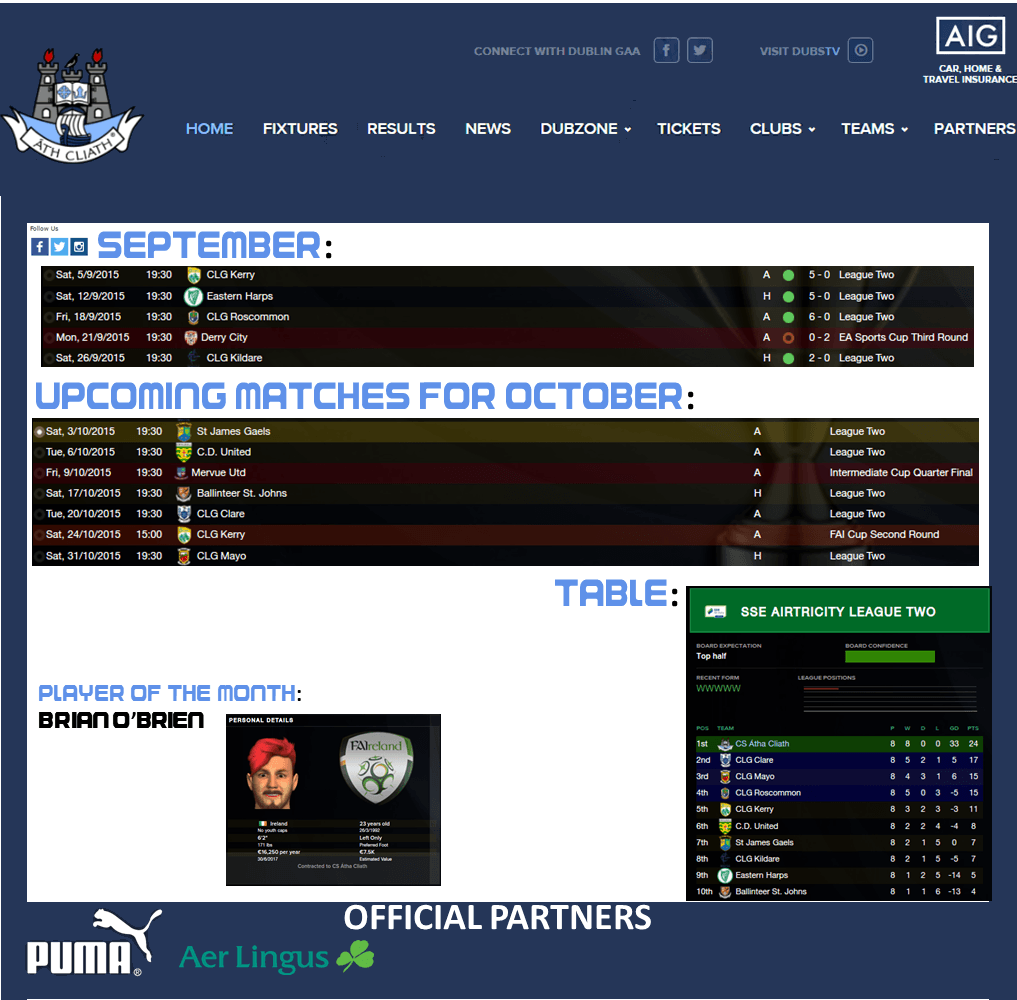 The second full month of play was just as good as August. We continued the run through the league with winning each match by wide margins and all four matches became shut outs. I was really impressed on the way the club handled the loss to Derry City.

It was hard picking what match I felt was the Match of the month because there were so many quality matches. The match with CLG Roscommon might have been the most exciting so far. Before the match it was seen to be a close one as they were one of the better teams in the league. Simon Grant and Brian O'Brien would be the stars helping us achieve a 6-0 victory.

I have a feeling Brian (O'Brien) will be our player of the month each month so pleased get used to seeing his name mentioned all the time. The 23 year old had another amazing month scoring 8 goals in six matches. I have a feeling we are going to get some phone calls soon.

October will be very busy with a grand total of seven matches, two that are in cup play and the rest league play. In cup play we will be facing Mervue Utd. in the Intermediate Cup Quarter Finals. We also get a chance to start our FAI Cup run against fellow League Two side CLG Kerry.
Login to Quote

Griffo
6 years
Well you gotta be happy with that!
Login to Quote

mgriffin2012
6 years
Another good month mate, keep it up!

Justice
6 years
It is all looking very very comfortable so far, keep it going and promotion will be yours in no time!
Login to Quote

Jack
6 years
Comfortably leading the way at the top there, good to see We are quickly approaching the end of 2015 and I can't believe how good this team is. They way we have been playing feels like cheating but I guess that is how things ended up with being in such a low division with a damn good system in place. I am dreading the upcoming transfer window in a few months as I think a bunch of my key guys could be gone.

In the beginning of the month we picked up this youngster named Oliver Madsen. This kid is a 18 year old midfielder from Denmark. So far I think he is good but still needs a lot of work. I have had him appear in a few matches and he did ok but I feel as if some more training with the B team would do him good so he has spent time with them. I have a feeling in a few years he will be a starter.

Our Player of the Month is someone different this month. Yes Brian O'Brien did amazing as always but this individual really came out of nowhere and was a key to the perfect month. 28 year old winger Daniel Doherty. In October he started all matches with a 9.5 overall rating and seven goals.

Finally November is going to be just as busy as October. Six matches with two in cup play will keep everyone busy. The most exciting match up for the month is in the Intermediate Cup Semi Final against Finn Harps. These guys are in the Championship and will be a good challenge. I hope we can do something and pull off the upset.
Login to Quote

OlleM13
6 years
OH, I think that Oliver Madsen guy, is gonna be sick. Keep him, he will be the best in the world