http://ichef.bbci.co.uk/onesport/cps/800/cpsprodpb/1259D/production/_89756157_gettyimagsdf.jpg
Celtic have appointed Brendan Rodgers as their new manager.

The ex-Liverpool and Swansea boss has signed a one-year deal with the Scottish club after departing Anfield in October. The 43 year old said he was itching to get back into action.

Brendan Rodgers:"I will give everything I have and do all I can to bring our supporters exciting, entertaining and winning football. The club has been in magnificent shape in recent years and has collected silverware regularly during this time. My objective now, of course, is to continue this work, to keep us at the top and again make our mark in Europe.

http://ichef.bbci.co.uk/onesport/cps/624/cpsprodpb/7F3F/production/_89757523_fsdfa.jpg
Rodgers was reportedly one of six candidates to take over from Ronny Deila and is taking over the league champions of 2015/16. As he himself mentioned, the bigger challenge will be competing in the UEFA Champions League and making it to the group stages of that competition.

The appointment of Rodgers could also attract some higher level players to the club, with Kolo Toure and Adam Bogdan being just two of his ex-players currently linked with a move to the club.

Both Celtic fans and Rodgers alike will hope he can hit the ground running and continue the title-winning form that Deila left. A trip into the latter stage of the Champions League wouldn't be beyond the young manager, and you can imagine that if he promises exciting football, he will deliver.
Login to Quote

http://ichef.bbci.co.uk/onesport/cps/800/cpsprodpb/1C7E/production/_90149270_dembele.jpg
Fulham's 19 year old striker Mousa Dembele is on his way to Celtic Park on a 4 year deal.

Brendan Rodgers' first signing of the summer window looks to be a steal with Celtic having paid just £500,000 for Dembele, who made 56 appearances in his Fulham career. At age 19, the PSG academy graduate will now play as understudy to Leigh Griffiths.

Mousa Dembele:"To be the first signing of Brendan Rodgers is unreal for me. He told me that Celtic is a good team for me. I will have game time. I obviously have to show I can stay in the team. I think it's a good way for me to progress. It's unbelievable for me to play for a massive club like this."


Heading the other way is Stefan Scepovic, who will now ply his trade for Getafe after scoring just 6 goals in his time at Celtic Park. Scepovic joins Colin Kazim-Richards and Carlton Cole as striker departees.
Login to Quote

Btw is this going to consist of real life signings from this summer such as Dembele etc, or just a coincidence aha?

Brendan Rodgers:"To have the amount of attacking options we do is immense; Commons, Griffiths, Rogic, Mackay-Steven - we genuinely have about 12 players to fill up those 3 spots up top. This creates some very healthy competition, and if you want to stay in my starting XI, you have to earn it, that's for sure.


Celtic's attacking firepower is one of the contributors to their comfortable league win last season but whether or not Rodgers deems it necessary to add some new faces is yet to be seen. A new signing in defence is thought to be next, with Kolo Toure and Tyler Blackett linked to the club.
Login to Quote

Everton left back heads on loan to Celtic

The 23 year old left back will spend his second year away on loan after making 24 appearances for Fulham in the 2015/16 season. He has made just 5 appearances in the Everton shirt but will be confident that he is in the club's plans, having signed a five year contract last season.

Rodgers will be hoping Garbutt can become a first team regular in a team that was lacking cover at left back, with only Charlie Mulgrew having any experience in the role. With experience in the Championship, a club like Celtic is a logical step forward for Garbutt in his end goal of succeeding Leighton Baines as first team left back at Goodison Park.
Login to Quote 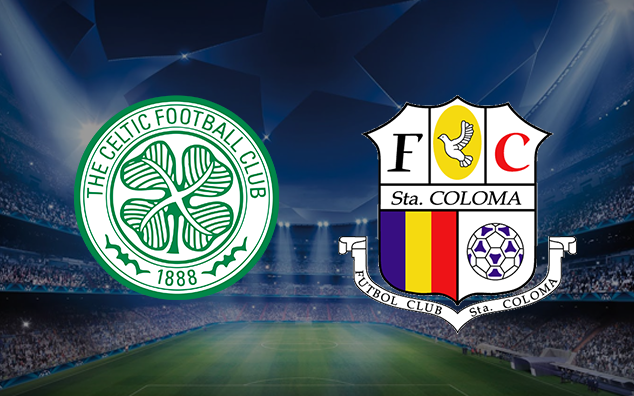 Brendan Rodger's Celtic will face off against Andorran minnows FC Santa Coloma in the Second Qualiying Round of the 2016/17 UEFA Champions League.

Celtic enter the competition at this stage whilst FC Santa Coloma defeated Lincoln Red Imps of Gibraltar 5-1 on aggregate to reach this match.

The Scottish champions are extremely heavy favourites to defeat the Andorran side, with most players at Santa Coloma being part time footballers. The exception are ageing 'stars' Juvenal and Ildefons Lima; Celtic meanwhile are a fully professional outfit.

The first leg will be played at Celtic Park on the 15th of July and the second leg in Andorra on the 22nd.
Login to Quote The new strip will be manufactured by Nike, with the club agreeing a four year deal with the American kit makers. Although the design has been finalised, we are yet to finalise a shirt sponsor for the season ahead.

The home kit sports the traditional green and white hoops with a green collar, whilst the away kit is a brand new design. Moving away from last year's green kit with white pin stripes, this year Celtic will travel in this sleek new black design, with 2 green stripes in the midriff area.

You can see our newest kits in action in our first Champions League qualifying match against FC Santa Coloma.
Login to Quote

Griffo
4 years
You have started a few stories but yet to get deep into one, hopefully this is the one that turns that around
Login to Quote

http://e0.365dm.com/16/07/16-9/20/celtic-kolo-toure_3751403.jpg
Former Liverpool, Manchester City and Arsenal defender Kolo Toure has signed a one year contract with Scottish side Celtic after being released on a free transfer from Anfield. The Ivorian centre back, 34, follows former boss Brendan Rodgers to Glasgow, and has been added into the squad for the upcoming Champions League qualifiers.

Toure said he was glad to be at "one of the biggest clubs in the world" whilst Rodgers praised the defender, who made his last appearance for Liverpool in the 2016 Europa League final.

Brendan Rodgers:"He's a wonderful professional. I brought him into Liverpool to add that bit of experience and help two of the centre-halves there at the time. In the big games, he was outstanding for me. With a lot of young players in our squad, he can really help them and he can be of great assistance for [captain] Scott Brown, who is a wonderful leader but he needs support and help around him as well. It will be nice for Scott to have someone behind him, who has that real big-game experience."


Toure will most likely line up alongside Danish centre back Erik Sviatchenko and fans will be hoping he can bring his immense Premier League experience and ability to the Ladbrokes Premiership effectively.
Login to Quote

http://e1.365dm.com/15/11/16-9/20/jesse-lingard-manchester-united-goal-celebration_3373912.jpg
Celtic have signed Manchester United's Jesse Lingard on a year loan after missing out on Marcus Rashford.

The big news of the day was Rashford's £11 million move to champions Leicester City, leaving many clubs chasing his signature disappointed. Celtic's hopeful loan move was cut short but they bounced back by agreeing to loan in 23 year old Lingard.

The attacking midfielder broke through at Old Trafford last season, making 40 appearances and scoring 7 times, including a famous volley to win the 2016 FA Cup final. But with the arrival of new manager Jose Mourinho, Lingard fins himself on the outer once more. Brendan Rodgers was more than happy to give the 23 year old game time and Lingard will now ply his trade in the Ladbrokes Premiership.

Brendan Rodgers:"Jesse is a special talent as we saw in the FA Cup final and I think he deserves a lot of gametime. To have a player of his calibre at the club will be a huge lift to everyone involved."


Lingard has been added to the squad to face FC Santa Coloma in three days time and is expected to start.
Login to Quote

walkinshaw
4 years
Some nice mix of youth and experience coming mate, Dembele should tear the league up in a season or 2.
Login to Quote

Celtic kicked off their Champions League campaign with a comprehensive 7-0 victory over FC Santa Coloma, Leigh Griffiths scored a wonderful hat trick, picking up the match ball, with debutant Luke Garbutt assisting all three of his goals.

The Scottish side dominating possession, having the ball 66% of the time and making life extremely difficult for the opposing defence. They registered 26 shots to FC Santa Coloma's 2, and it took just 9 minutes for one of those shots to hit the back of the net. Towering defensive midfielder Nir Bitton used his height to his advantage in the corner situation, heading home Stuart Armstrong's delivery to give his side the lead. 3 minutes later, a hanging Garbutt cross was pounced on by Leigh Griffiths, surging away from his marker and tapping home an easy goal.
http://ichef.bbci.co.uk/onesport/cps/624/mcs/media/images/73312000/jpg/_73312894_9427159.jpg

Leigh Griffiths scored the first of three in the 12th minute
At the quarter hour mark, Santa Coloma goalkeeper Juanjo Blanco made a rookie mistake, pushing the ball back into play rather than over the bar to safety, and Kris Commons was more than happy to capitalise on the chance. Despite dominating the open play, the Bhoys were unable to add further goals up to half time.

It took 9 minutes for Celtic to score from the break, with another opportunistic effort, this time from Stuart Armstrong. The central midfielder rocketed the ball into the top left corner after a clever piece of play from Kris Commons in a free kick situation. Commons feigned to take a controlling touch but instead flicked the ball closer to goal, giving Armstrong an easy finish. Garbutt gifted Griffiths his second goal of the night, with another high hanging cross that managed to lob the keeper, giving Leigh Griffiths an empty net.
http://d2qsy1h1438jt3.cloudfront.net/~/media/706707ece9554cf6a889f35373e1b128.jpg

Luke Garbutt had a blinder at left back, assisting all three of Griffith's goals
Substitute Darnell Fisher, who came on for the injured Mikael Lustig, emphasised Celtic's dominance on the flanks with a low cross to the front post duly tapped in by Kris Commons for his brace. The score now 6-0, it was a case of deja vu for Santa Coloma as Juanjo Blanco was again chipped from range via Luke Garbutt, and again, Leigh Griffiths had an easy finish.

"The lads showed a lot of character today because we came to a game that looked easy on paper and that can sometimes get into the heads of the players, but today they did their job very well. Leigh had a fantastic game today and so did Luke at left back, he had a great debut, and now we'll go over to Andorra with 7 goals in our pocket."
Login to Quote