ScottT
1 year
Great to see you survive once again. It's going to be interesting to see if you can continue to improve year upon year from now. A very nice result against Molde recorded too!
Login to Quote

ScottT - thanks! yes, I need to do some changes, can't keep conceding so many goals.
Login to Quote

A lot has happend this pre-season. Many new players have arrived, but also some had to leave the club.

Zachariassen, the home grown Fram Larvik player wanted new challenges, and after 124 games and 47 goals for the club, he went to Start for 70 000€

Fram Larvik paid a lot for this player, but they seem to have faith in the youngster from Iceland (Hlynur Bjarnason) 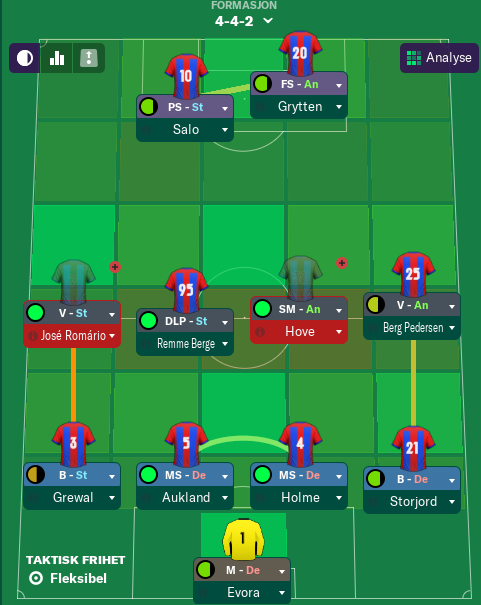 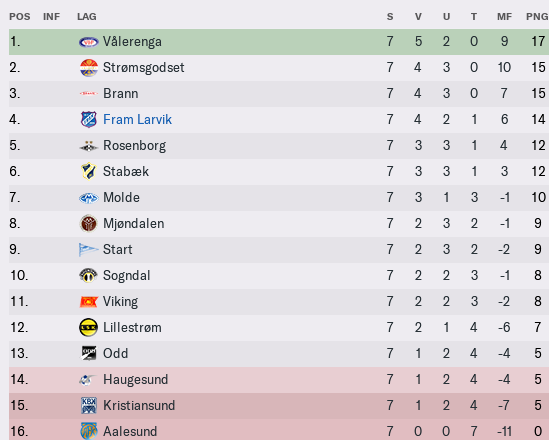 A very good start from Fram Larvik! Only one loss, and they are not conceding many goals in the start on this season. It looks much better already!
Login to Quote

ScottT
1 year
Wow, what a great start! When I saw the outgoings, I worried as it seemed a lot of your players were taken from you by other clubs in the league. However, you've clearly replaced those well!
Login to Quote

Justice
1 year
A very positive start to the season, two points per game is a great record to hold!
Login to Quote

Jack
1 year
Great to see you as the underdogs again this time around and even more delighted to see you so far up the league. Aalesund seem to be having a nightmare though!
Login to Quote

pickshield
1 year
ScottT - Thanks! Yes I lost a lot of important players, but I'm happy with bringing in the new players, from Iceland and Finland.

looking forward to continue this season.

Jack - Thanks! Yes a very weak start for Aalesund. I think they will get relegated this year
Login to Quote 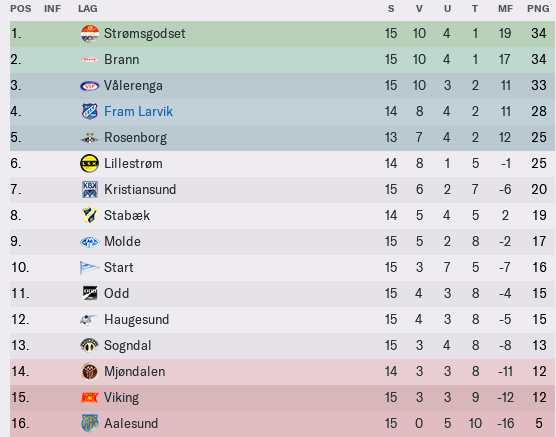 Still going strong. Fram Larvik are preparing for the quarter final in the cup, against Sogndal
Login to Quote

mgriffin2012
1 year
To be up there challenging is an incredible achievement to be fair, you're looking strong and could achieve something very special this season
Login to Quote

Justice
1 year
Very very good, you have put yourself into a strong position to challenge for European spots already!
Login to Quote

Remember a save I had at FM18 with Fram Larvik. Got promoted the first season after some hcrazy last matches, and also a promotion in my first season in the first divison. Played one season in Eliteserien and survived, barely. Then my save crashed... sad story. It was really fun.

Keep up the good work :-)
Login to Quote

ScottT
1 year
Another great run of results. Just two losses all season is fantastic and puts you in a great position. Looking forward to seeing how you continue.
Login to Quote

No1VillaFan
1 year
I love this story

I can not wait to read more, we need more stories with teams like this here
Login to Quote

Justice - Thank you! Let's see how the season goes on after this.

OfficialHero - Thanks for nice words! Fun to hear about other people who have done the same! too bad about the save though..

ScottT - Thank you! it's fun to see my changes before the season are paying off.

No1VillaFan - Thank you! I enjoy this story, so it's fun to see others do as well 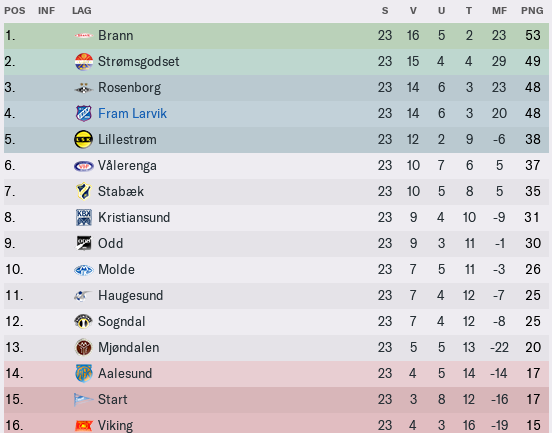 Still a strong run for Fram Larvik. No matter what happens in the end of the season, it has turned out to be the best since Johansen came to Larvik.

A close defeat, but Fram Larvik was never close to get the win. Stabæk controlled the whole game. 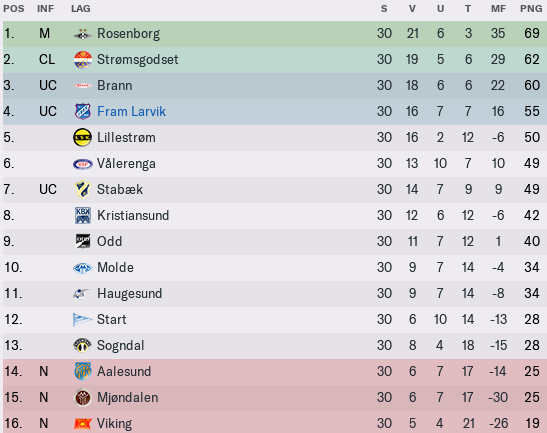 Fram Larvik ends the season with a impressive 4th place, and the possibility to qualify for Europe next season. A well achieved season for the boys.

The most scoring player in the clubs history will leave the club at the end of the season. Thanks for the service, Stian Dyngeland.
Login to Quote

You are reading "The road to glory - Fram Larvik".