TheLFCFan
2 days
So unfortunate in Europe. To lose to two of Europes giants by just one goal is tough luck but shows you have a talented side.
Login to Quote

ScottT
2 days
Two very credible efforts against Barcelona and Juventus. Good luck against Leverkusen. It's difficult to gauge the league for the time-being given the games AZ have in hand but it appears they could be a challenger this season, potentially?
Login to Quote

Griffo
2 days
The match against Leverkusen looks like it will be crucial, hope you can sneak into third
Login to Quote

Justice
1 day
Certainly not an impossible task to make something out of the remaining European games but not an easy task. In terms of league play, those games in hand could be very beneficial if you can get the results you want.
Login to Quote


it was definitely satisfying to be some competitive but difficult to swallow getting nothing to show for it!
Login to Quote

2020-05-29 01:19#272570 ScottT : Two very credible efforts against Barcelona and Juventus. Good luck against Leverkusen. It's difficult to gauge the league for the time-being given the games AZ have in hand but it appears they could be a challenger this season, potentially?

Seems like we will be near the top of the league but we have been very fortunate with very few injuries thus far. That said I like our depth at almost all positions.
Login to Quote

After a struggle for the first 40 minutes we finally get a goal before the break on our way to a 3-0 win against NAC Breda. Stengs left the match with a leg injury in the 34th minute, bringing on Saro. Saro provided a big spark, assisting on the goal by Guerra. Kovachev added a goal in the 79th minute, assisted by Midtsjo. Saro scored a goal for himself in the 90th minute. The scoreline was fitting for the match, as we dominated throughout.

Another convincing with at VVV-Venlo, Saro opened the scoring as he scored 17 seconds into the match with a great run through their defense. A complete team effort in a dominating performance with other goals from Torunarigha (assisted by Kovachev), Til (assisted by Eboa Eboa) and Kovachev (assisted by Doyle-Hayes).

We broke through first against Juventus on a goal by Guerra in the 15th minute, assisted by Stengs. The entire match was full of excitement as both teams attacked and counter-attacked the whole way. However, Everton assisted on a goal by Ronaldo in the 43rd minute and then finally Ronaldo assisted on a goal by Everton in the 66th minute. Both goals came from direct counter attacks as our defense could not cope with those two. It should be noted that both the goal and the assist were the first of the competition for the 38-year old Ronaldo.

Another dominate in the league, this time we take down SC Heerenvenn - whom are on a free fall down the table. Guerra had a brace with goals in the 3rd and 70th minutes, he also had an assist. Kovachev added a goal and an assist. And seldom used Luka Ivanusec added our final goal in the 86th minute. (forgot to mention we added him in August transfer window from Leeds)

A showdown with Ajax lived up to the hype but we came up short, their youth project Dennis James scored the loan goal in the 30th minute. We outplayed them as they were unable to regularly breakdown our defense, leading to a 23 to 5 shot advantage in our favor. Finally, the rematch with Bayer provides us a chance to likely take 3rd in the Group and we fail to grab all 3 points. They opened the scoring in the 20th minute with a goal from Paulinho but we answered right back with a goal from Guerra 2 minutes later. Guerra added another goal in the 34th minute. Bayer got the equalizer in the 59th minute on a free kicked headed in by Tah.

Overall, outside of the Ajax match we got about what we could have expected. We played really well throughout the month. 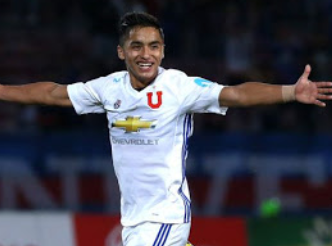 Guerra was outstanding this month! In four starting appearances he scored 5 goals and added an assist. He has basically taken over as our number one option at the top of our attack. He has a team leading 12 goals and 5 assists so far this season.

The squad continues to have no major injuries to report. 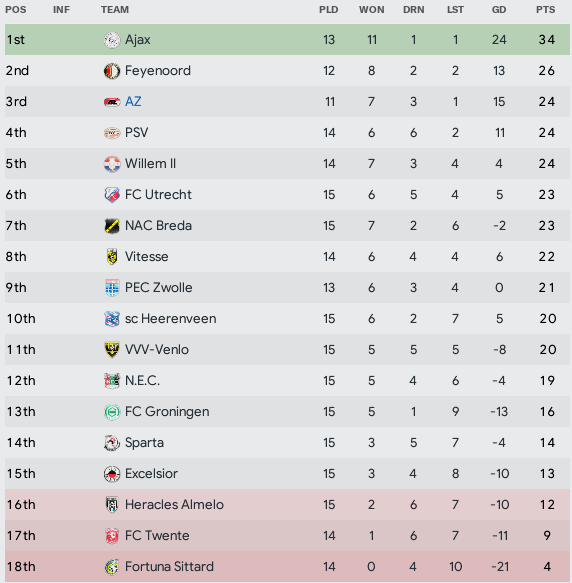 The loss to Ajax creates a decent size gap to get to the top but we do still have two matches in hand. We are finally seeing the table "normal"-ize with the usual suspects near the top. PEC Zwolle and sc Heerenveen are fading fast.

We need a miracle win away to Barcelona to get up to 3rd. Bayer decided to sack Julien Nagelsman after our match, they are struggling the Bundesliga too.

A busy month ahead in the league! A couple tougher away matches with Willem II and FC Utrecht but if we can maintain our standard of play we should be in really good position by the end of the month.
Login to Quote

Justice
10 hours
Still in the hunt for top spot in the league. Ajax have a bit of a lead but those games in hand could prove vital! As for the Champions League.... third is still possible, but it'll be tough! Good luck against Barca next month!
Login to Quote

TheLFCFan
9 hours
Rising up the league and can go into second with a win in the game in hand. A shame to lose to Juve having been a goal up but it happens when the best sides go up a gear.
Login to Quote

ScottT
7 hours
Pleasing to read that performances have been strong this month. The result seem to suggest that too.
Login to Quote

Griffo
2 hours
Lots of games in hand, looking like you have found your groove in this league
Login to Quote