Eoin97
5 months
An up and down month. It started alot worse than it finished, which in itself is a positive, as you are currently on a 2 game winning run. Just focus on getting those 6 points, and hopefully players of Origis quality can salvage it

TheLFCFan
5 months
That seems very harsh from the board, sitting just outside the top four isn't bad going. Hopefully you can get the points required and prove to be the right man.
Login to Quote

Edit: This is the guy that got me going, check it out if you have a second: https://www.fmscout.com/q-12451-Oriental-Lisbon--One-Step-Closer.html


Thanks, will have to check it out!
Login to Quote

grismosw7
5 months
ScottT - For sure a roller coaster month! Failing to advance in the Europa League seemed to be a nearly fatal blow. Despite the bad luck and quantity of injuries.

Eoin97 - Absolutely must focus on these next few matches, get the required points and forge ahead!

TheLFCFan - I agree, we are right there in contention for Europa League and with a good form we could get into Champions League qualification. A bit harsh for sure!
Login to Quote

The leaves Elsner with a must win match against Hertha BSC.

Origi is really turning it on late in the season with 2 goals and 2 assists this month.

I am pleased to report a clean bill of health entering the month of April! 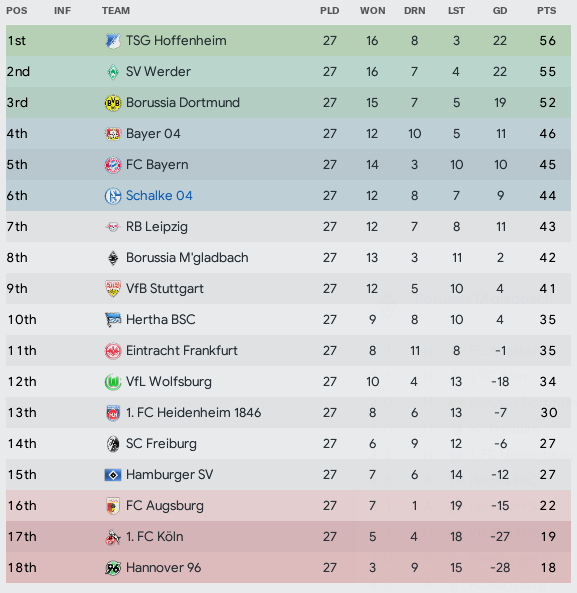 Overall we are still in good position to qualify for European football but need to finish strong. We are not far from 4th but also not far from 9th. Dortmund appear to be chasing down the top 2.

Bayern have fired Jurgen Klopp and hired Luis Enrique to replace him.

Not an easy month at all with Hertha, Leverkusen and Dortmund all away. We have to get all six from our home matches...assuming Elsner makes it that far!
Login to Quote

Eoin97
5 months
A decent month, getting some important points on the board. Next month though, Schalke have to be at their absolute best to see Elsner keep his place at the helm in Gelsengirchen...
Login to Quote

ScottT
5 months
Fingers crossed that Elsner can capture the three points he needs to continue his tenure in Gelsenkirchen.
Login to Quote 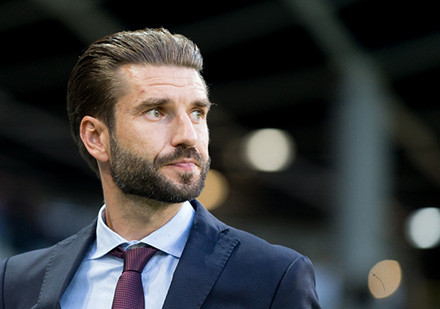 
After failing to get the mandated 9 points from the previous 5 matches, after 1-0 loss against Hertha BSC. Schalke has terminated Luka Elsner's contract immediately after the match. Members of the squad reported that Elsner was not allowed to make a final post game speech and did not return with the team to Gelsenkirchen.

Elsner has refused multiple media interviews but did make an appearance on social media, "I would like to thank the squad for giving me everything they had. I am proud of the work we did to reshape the future of Schalke going forward - not only the senior squad but the youth setup is greatly improved from where it was a year ago. I am disappointed that I will not be able to see this project through. I am a big believer in failure is the biggest avenue for future growth. I look forward to taking a couple months to reflect on my time at Schalke and Union SG before getting back to work. See you soon."
Login to Quote

ScottT
5 months
That is harsh. I wonder where he will go next?
Login to Quote

Griffo
5 months
Geez that is rough... looking forward to seeing Luka build himself back up
Login to Quote

Eoin97
5 months
Football is football, it's a cut throat business at the best of times. Hopefully Luka can get the ball rolling with an even better job next
Login to Quote

TheLFCFan
5 months
Wow, can't see many wanting to work under that board!
Login to Quote 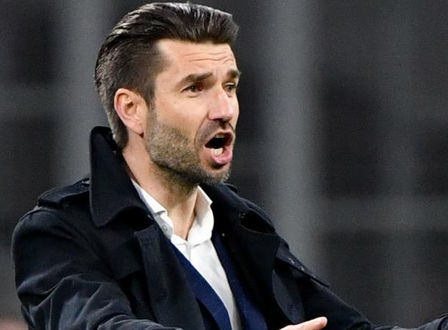 In late May, Elsner started to find himself a hot commodity in France with SM Caen and Clermont both requesting interviews. Elsner was excited for the opportunity to return to France. Supporters from both clubs were anxious to hear that Elsner was named their manager. However, SM Caen decided to hire veteran manager Alain Casanova from Toulouse FC. Supporters were outraged to hear the news, Elsner was shocked as the interview went extremely well and both sides shared a common vision.

The very next day Clermont announced they had agreed to terms with Pascal Dupraz to be their next manager, leving Elsner in the cold once again. Elsner was not disappointed by the news, in fact he expected it after challenging the club's vision during the interview. Clermont simply was not willing to compromise.

On June 1, AS Saint-Etienne President Roland Romeyer asked Elsner to discuss possibility of becoming their next manager. Elsner was flattered and agreed to meet later that day. Elsner impressed Romeyer and they both shared a common vision, the squad needed to get younger. On the 4th of June it was announced that Elsner has been hired as the new manager of ASSE, replacing 67 year old Christian Gourcuff. 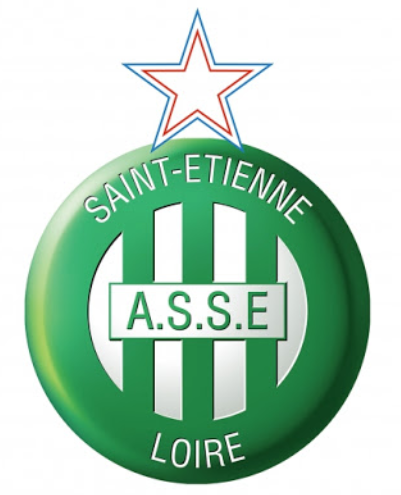 A chance to manager one of the most successful clubs in France and a true fallen giant. What better way to resurrect Elsner's career than try to bring them back to the top. I always envisioned this career heading into France at some point, hopefully remaining here for the rest of his career but let's see how things evolve.

Oh and by the way, Schalke finished the season in 7th place - failing to qualify for the Europa League after replacing Elsner with Jeff Saibene. Karma at it's finest. 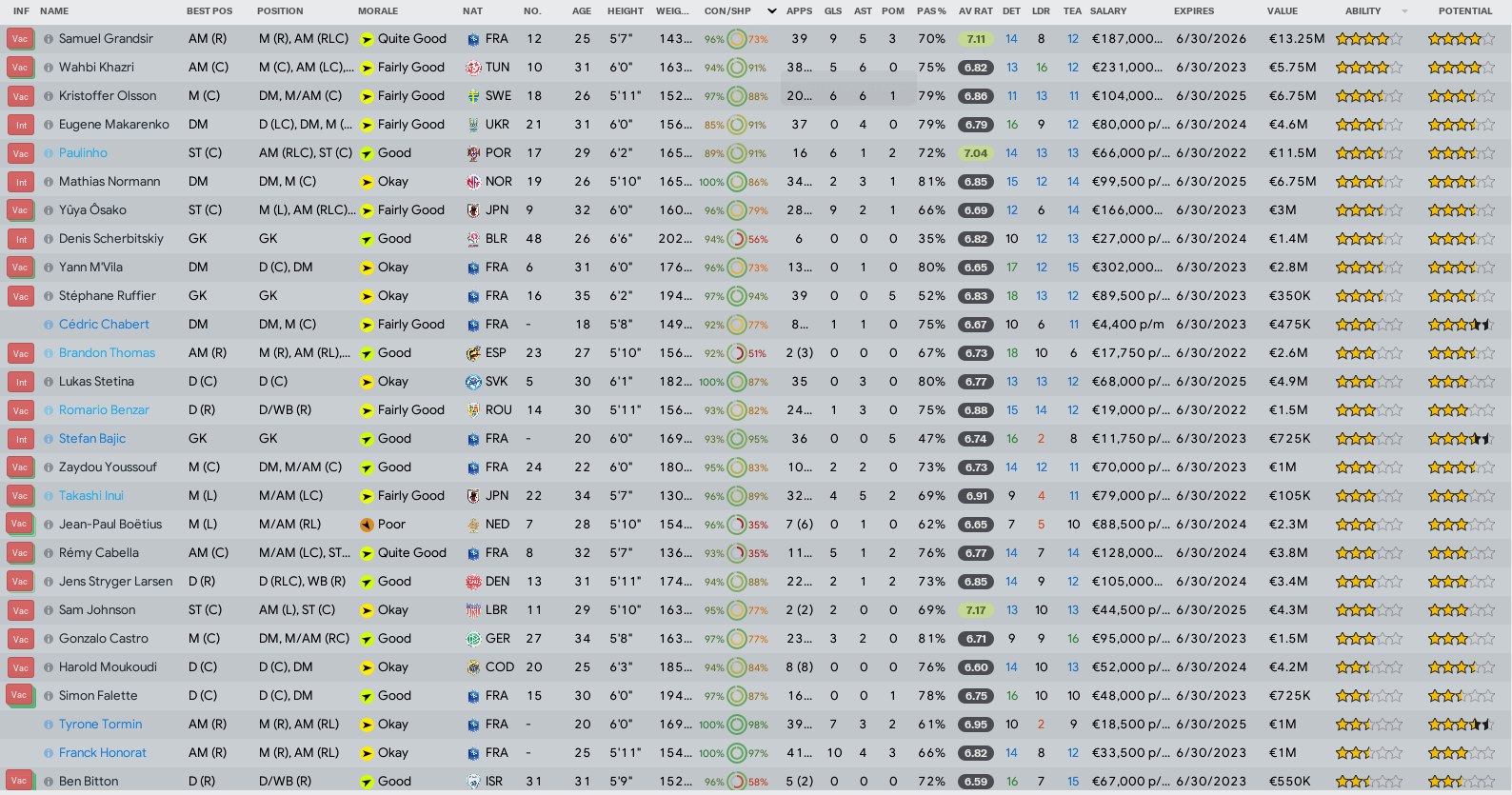 I do not remember seeing an older squad in FM...

That said there are some good pieces here and a lot of old players with contracts expiring at the end of next season that we have no intent of keeping around. It will be a busy summer for sure, with a complete squad overhaul expected.

A familiar name, Matthias Normann who played for Elsner at Union SG is in the squad. He was impressive two years ago before getting injured.

Samuel Grandsir has a lot of attention from around Europe, we need to lock him down asap. However, a nice fee would be okay to start the retooling of this squad.

At Goalie, veteran Stephane Ruffier is still anchoring the position with Denis Scherbitsky able to fill in nicely. Also, a youngster to be groomed in Stefan Bajic who had an impressive season at OHL in Belgium.

Almost every other position will see some movement...
Login to Quote

ScottT
5 months
The side certainly needs a lot of rejuvenation. However this appears to be an interesting project for Elsner. I have a lot of time for Saint-Etienne. Good luck!
Login to Quote

Griffo
5 months
An absolute fallen giant, what a good choice to bring this club back!
Login to Quote