Justice - That is what I was thinking, at least we will be bringing in some nice ticket revenue!!
Login to Quote

A thrilling opening JC Schaal match but in the end Ajax was too strong against our rotated squad, as we were focused on CL play. Brahim Benali finished the day with a hat trick for Ajax, Guus Till had a brace for us. We rotated the side once again for the FC Groningen match and struggled to do much after the opening goal by Till (5th minute, assisted by Danchenko) but they quickly equalized with a goal by Wayan Pratama in the 9th minute.

We get our first win in the Eredivisie with a loan goal from Mohamed Taabouni, assisted by Angelo Saro. Our rotated side once again played well, with Jordan Schendelaar holding off an onslaught in the final minutes with three outstanding saves. Another rotated squad against Sparta and we were fortunate to get a point after allowing a goal in the 90th minute by Leart Paqarada but Mohamed Taabouni scored just before the gun, 2 minutes into stoppage time.

Overall, no complaints as we were focused on the Champions League Qualification matches and we still picked up a point in each of our league away matches. 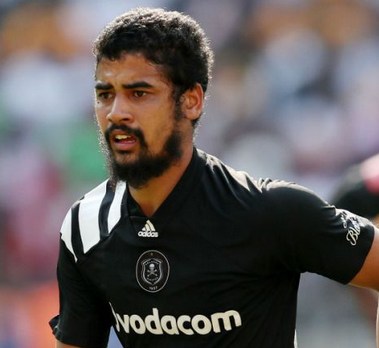 Mobara barely beats out Taabouni for honors this month, both were great but Mobara was outstanding in all four Champions League Qualifying matches. So much so that many teams from England are starting to take notice. In four matches, he never had a match rating less than 7.0 and registered two POMs.

We finish a busy month with a clean bill of health! For sure the heavy squad rotation played a part. 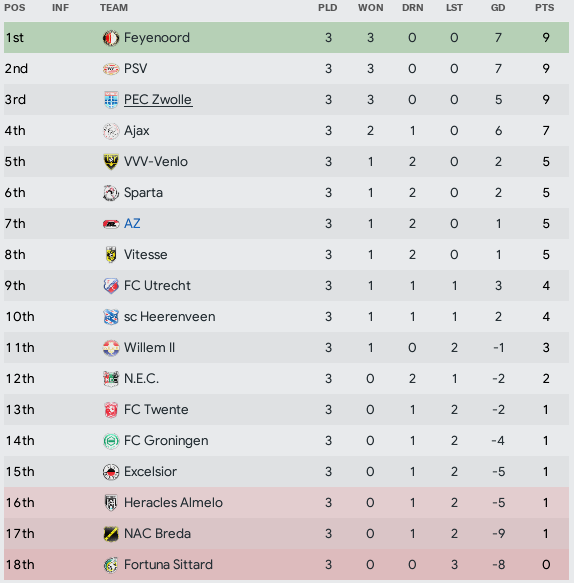 It is early but PEC Zwolle is surprising everyone after they were promoted last season. They are interrupting the standard top 3. Now that the schedule balances out a bit better hopefully we can start grabbing some more points along with way.

A lot of points for us to grab in the league and our "easiest" away match in our Group. We will have to find a way to stop their potent attack.
Login to Quote

ScottT
5 months
A decent enough start given the number of games and the focus mostly being on the Champions League. I'm sure the focus will be concentrated more on the league from this point.
Login to Quote

Eoin97
5 months
A slightly rocky start but nothing out of the ordinary. Hopefully in the next few games you can pick up some wins.
Login to Quote

TheLFCFan
5 months
That Champions League group is horrific! I believe third is the only chance you have unfortunately so a point away to Bayer could be massive if you manage that next month. In terms of the league things are going ok, especially considering the abundance of matches you had to play compared to everyone else. Wonder how much longer PEC can be up there for...
Login to Quote

Griffo
5 months
Agree with LFC, third has to be the aim here for the Champions League, anything ahead of this is remarkable.
Login to Quote

Justice
5 months
Mixed start to the league season, but next month will be massive! That Leverkusen game will be exciting, good luck!
Login to Quote

The KNVB Cup started this month, we drew FC Dordrecht in the first round. We are the home team, playing on the 28th of September. As a result we had several league matches rescheduled and ended up with a relatively light schedule this month.

We open the month with a very solid showing against Vitesse, winning 1-0 behind a goal from ter Haar Romeny in the 38th minute (assisted by Kovachev). They had more possession than we would have liked but overall we played quite well. Absolutely domination against Heracles Almelo, holding them to just 1 shot all match. Kovachev scored in the 29th minute, assisted by Mobara. Doyle-Hayes capped the scoring with a clinical finish assited by Guerra in the 51st minute.

Our gameplan against Bayer worked, somewhat. We were fortunate to score just before the half on a goal by Teun Koopmeiners, assisted by Stengs. The first half was pretty much even but we made in roads against there gigantic center back combo of Tah and Zagadou. They scored shortly after the break on a goal by Marius Wolf and from there we held off a dominate half from Bayer to secure a giant point away from home!

We naturally hammered FC Dordrecht but our defense was disappointing, allowing 2 goals. Guerra was the star of the day with 2 goals and 2 assists. Taabouni added 2 goals and an assist, Saro also added a 1 goal and an assist.

A very good month, we could not have expected much more. Kovachev had a great month, shining in league play but he was also very good against Bayer. He finished the month with a 1 goal and 1 assist but shined in his playmaking with several key passes and key dribbles in all 3 matches he appeared in before sitting out the match against FC Dordrecht.

We have a few lingering injury issues but everyone is expected to be healthy before the 2nd of the month. 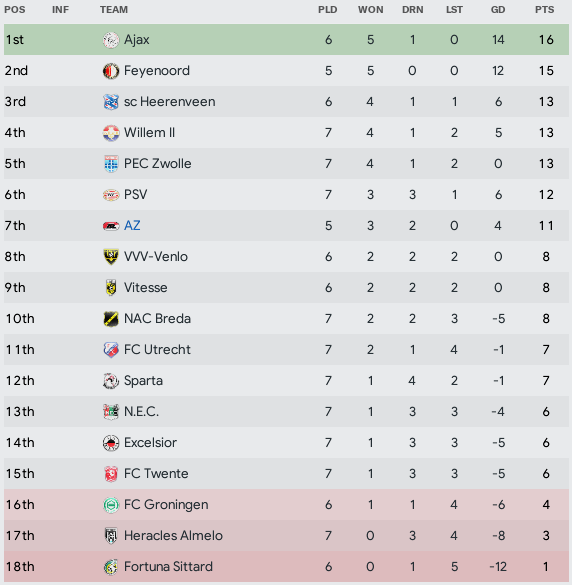 Ajax jumps to the top of the table but Feyenoord have a game in hand. We are trailing behind simply due to the lack of matches, at least I hope!

An important point against Bayer gives us hope for at least a 3rd place finish. Barcelona beats Juventus 2-1 in the only other match of the group to this point.

A lot to play for this month. Home matches against Barcelona and Juventus. Away against PSV. Finally we should have another easy victory in the KNVB Cup with EVV visiting us.
Login to Quote

Zed
4 months
Decent start, just a few frustrating draws. I'm sure you can iron them out and become more consistent! Nice sleek graphics too btw!
1
Login to Quote

TheLFCFan
4 months
Two massive European games next month, ones for the fans to really get behind the team.
1
Login to Quote

Justice
4 months
Now that's more like it! Still early days in the league so plenty of opportunities to climb towards the glory positions!
1
Login to Quote

Griffo
4 months
A very good position to be in on all fronts, keep building!
1
Login to Quote

Wolf
4 months
Wow you're in such a group of death, nice result against Bayer but now it will just start
1
Login to Quote

Barcelona's attack of Mane, Coutinho, and Gabriel Jesus was quite intimidating and we opted to try to and absorb pressure then hit them with a counter attack. We did well but an own goal by Pantelis Hatzidiakos gave them the lead in the 31st minute. It was an unfortunate play, where Eboa Eboa's clearance attempt ricocheted off of Hatzidiakos and Dmitrovic was unable to save it in time. Minutes later Ruben Nieves scored another goal to give Barcelona a 2-0 lead heading into the break. We went back to our normal formation and attacking style in the 2nd half and outplayed them with Nicolas Guerra scoring in the 88th minute assisted by Kovachev. We were unable to get an equalizer though.

A well deserved draw for both sides against PSV, little separation for either side throughout. An absolute drubbing of EVV with Guerra leading the way with a hattrick and an assist.

Rather than sit back against Juventus we decided to be the aggressor, it nearly paid off in a very even match. However, Juventus got a great goal from Federico Bernardeschi in the 81st minute. Guerra nearly got us even in the 90th minute but hit the post! Another tough loss in the group.

We rebounded nicely with a 4-1 win against bottom half of the table Excelsior. Taabouni was amazing - scoring 2 goals and assisting on the other 2.

Another month where we played about as well as we could have expected. It would have been nice to pick up another point or two in the Group Stage but it was not meant to be, we were very competitive in both matches though. 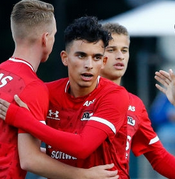 Taabouni has been great the entire season so far and this month was no exception. He currently leads the team in goals despite not being featured in the first team. He finished the month with 3 goals and 2 assists in 4 appearances.

Once again we have avoided any major injuries, just a few minor nagging injuries as we head into the month of November. 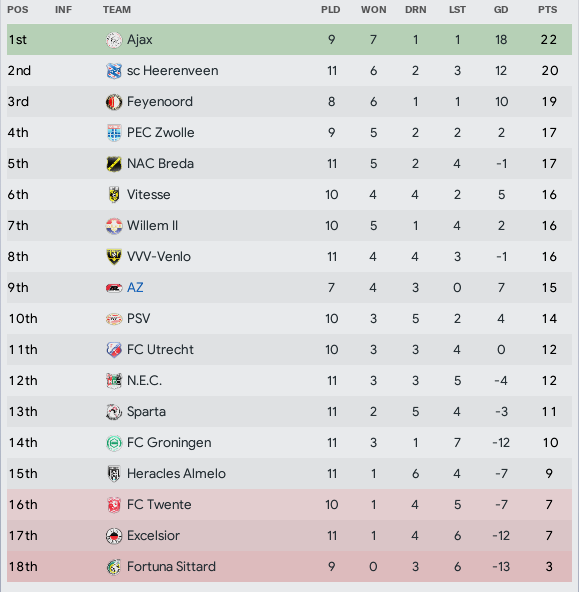 We are still in good shape in the league, once we make up the matches that were pushed back we should be in good position assuming we are still in form.

After losing at home to both Barcelona and Juventus we will be fighting for the 3rd spot with Bayer, a crucial match ahead where we get them at home.

A difficult month ahead with our Champions League matches and the top 2 in the league. Venlo and Breda are both top half of the table as well. A big test ahead for the squad!
Login to Quote