Season 11 is an exciting time for Palermo. We have qualified for the Europa League which should be much more achievable than the Champions League at this stage of the save. We were unlucky not to reach the final last season so that is our target this year. Although we finished 4th the season before last, we learnt last season how tough it can be to compete in three competitions throughout a season. Rotation is important and therefore we are looking to add more players to our squad this pre-season. To our relief, after a successful season for AC Milan, the riots that effected the schedule in in the past two seasons is now over, and we will resume a normal fixture list this season.

Salah and Lukaku leave the club freeing up an extra £300k in wages. We have about £25 million to spend, but we all know that in todays game, that isn't really a lot of money, so we must purchase wisely. We will look to offload a couple of players, and send a few of our younger players out on loan.

The first piece of business in pre-season was the sale of Nigerian Michael Kingsley. He failed to impress when he played last season, so we cashed in and sold him to Atletico Miniero in Brazil for £2.6 million up front, rising to £3.9 million.

Vinko Kovacic was the first signing of Season 11. The Croatian winger was transfer listed by Inter Milan and we snapped him up for £9 million. Only £3 million up front, the rest in installments. He will be a usual player and provide competition for Susa on the left wing. 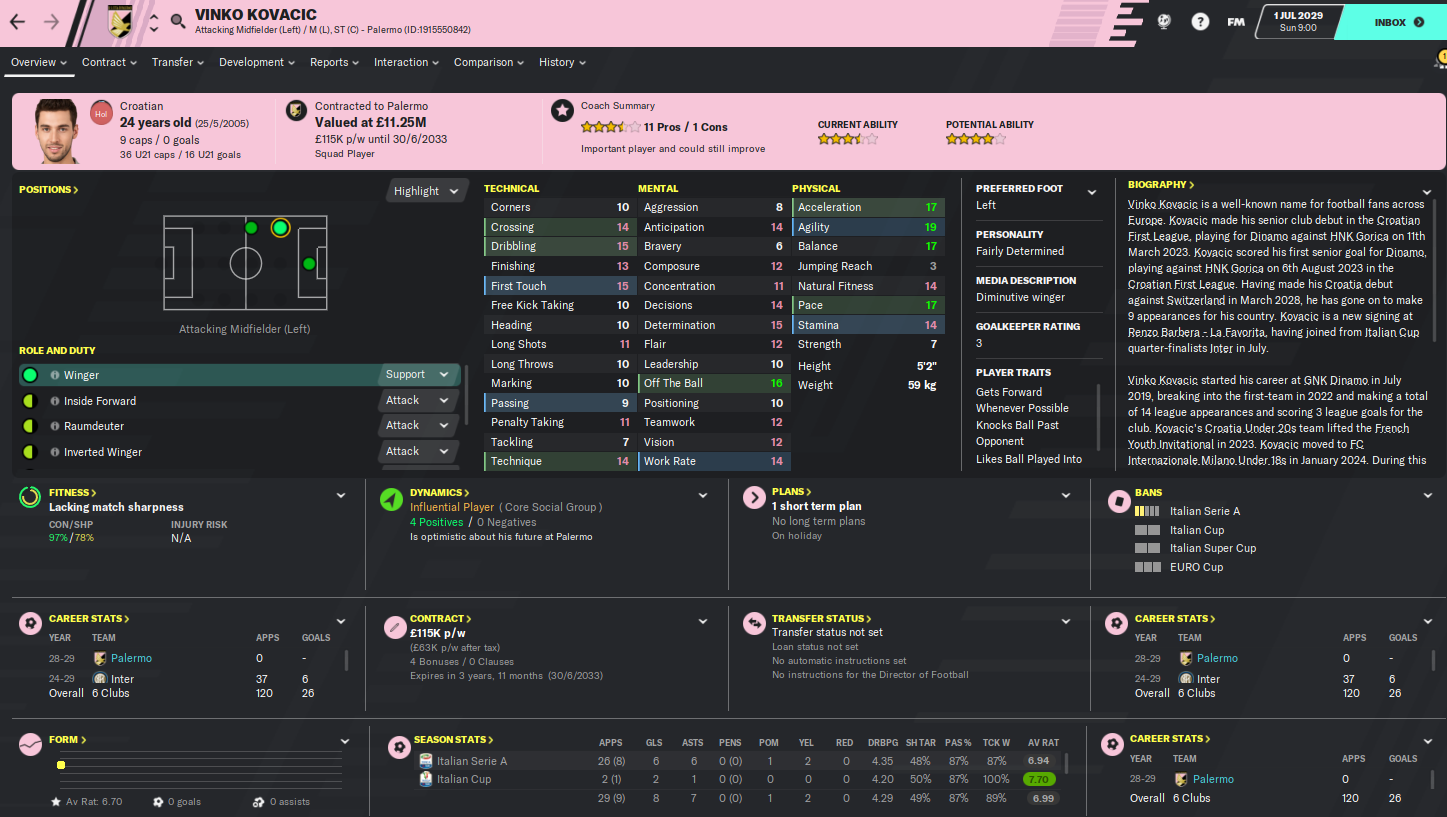 Mattia Ballabio was the second addition to the team. He has a succesful season at SPAL last season, and only cost us £5 million. He will provide back up to Acascibar and replaces Kingsley. He is more defensive minded so will hopefully balance our midfield. 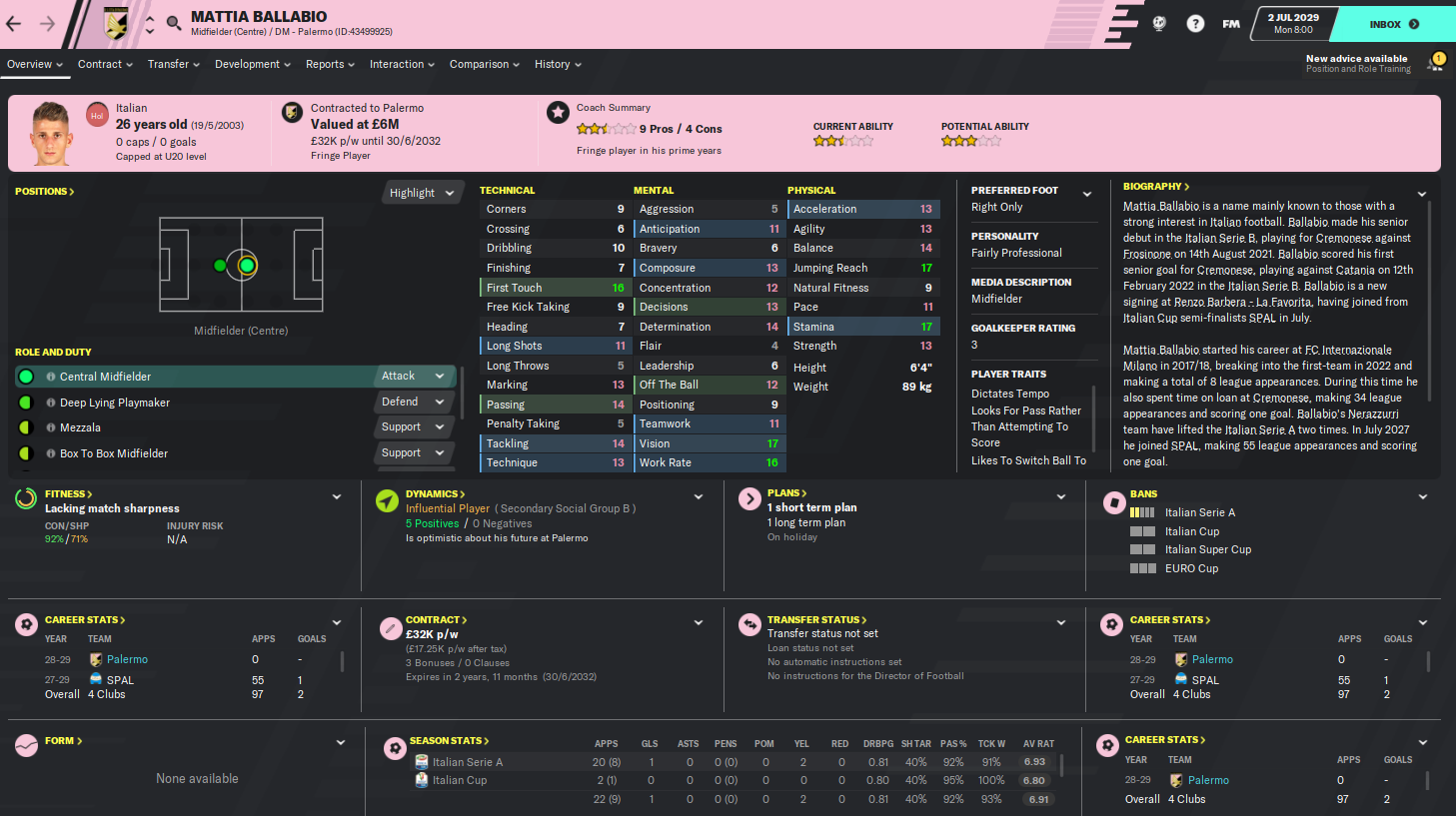 The next signing was a big money transfer. German wonderkid Daniel Bayer joins for £20 million from Bayer Leverkusen. The 6'5 striker is only 20 years old and already has fantastic attributes. He will be the second choice striker behind Duncan, but is a real talent who will add a lot of quality to the team, he also has the potential to be the best player at the club. He is known as a 'Haaland' type of player, tall, great acceleration and finishing ability. He is a real coup for Palermo.

Daniel Bayer had a dream debut. He was subbed on in a pre season friendly against Tottenham in the 60th minute. It took him just 10 minutes to score, and 2 minutes later he scored again. This boy is something special! 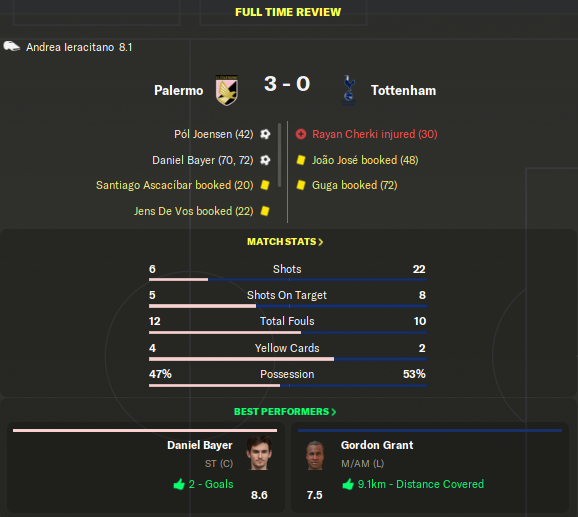 Palermos next signing is Argentine winger Mauro Girladi. The Argentina winger from Liverpool costs the club £3 million this season, rising to to £12 million. His pace and passing ability make him a quality player and with rumours that Joensen could be leaving the club, he could start on the RW for Palermo this season.

The next pre-season friendly was against Dortmund, and Acascibar got a straight red after 9 minutes, it resulted in big loss, Dier also got sent off in the 75th minute, we really must not like Dortmund! 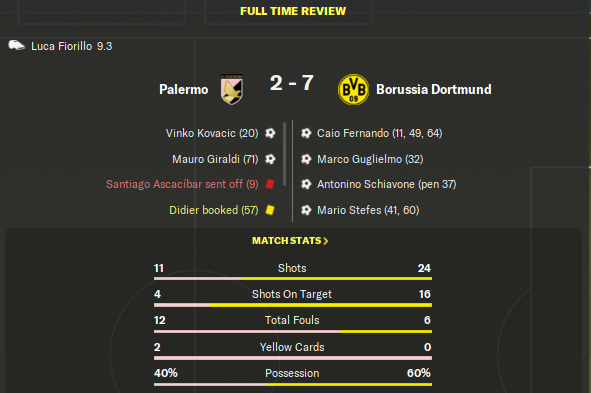 Pol Joensen was one of our best players last season. He scored 15 goals in 32 games as well as 6 assists. But at Palermo we have a philosophy, if a player wants to leave and we can make a good profit, then we will sell. Joensen wanted to leave last season to play Champions League football, and as we are in the Europa League this season we decided to cash in. We signed the Faroe Islands international in 2024 for free. Today in 2029 we sold him for £40 million to Borussia Mochengladbach. We are currently receiving 100% of the transfer revenue so we now have more money to strengthen the squad in other areas. He was good, but not irreplaceable, new signing Giraldi will now start on the RW with Roberts as his back up.

Miguel Vazquez signs from Real Madrid. The Spanish midfield has great passing and vision and will add depth to the already strong Palermo midfield. He cost the club £7 million up front rising to £17 million. Palermo really are adding a lot of players to build the team even stronger, and making the most of the money bought in from the sale of Joensen.

Alisson signs on a free transfer from Juventus. The Brazilian keeper is aging but still a great player! He will start this season ahead of Urso who has struggled with injuries that past year. This will likely be Alissons last season before he retires, so he will want to finish his last season in football well, and we are hoping he can be an important player this season. 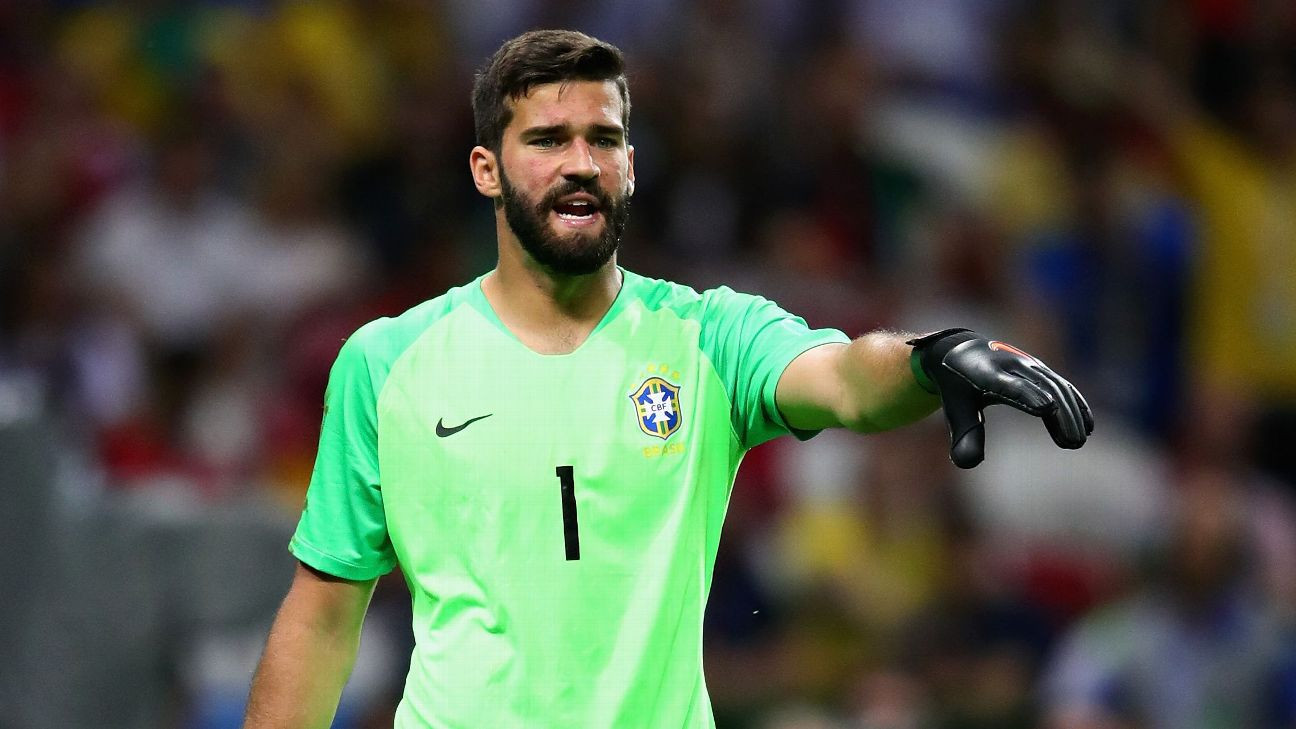 The arrival of Alisson saw the departure of Plizzari, he was sold to Genoa for £650k

Cristian Bombana signs from Barcelona for £20 million. The Brazilian left back will be starting this season and is an upgrade on the current players De Winter and Migliaccio. Bisogno is still coming through but not quite ready for the first team. He has great heading, tackling and natural ability but we will train his crossing all season. He played 27 games for Barcelona last season so he is ready to play at the top level.

We ended pre-season with a very good win over Athletic Bilbao. Bayer really impressing again, and giving us a decision, either Bayer or Duncan to be the main striker this season... 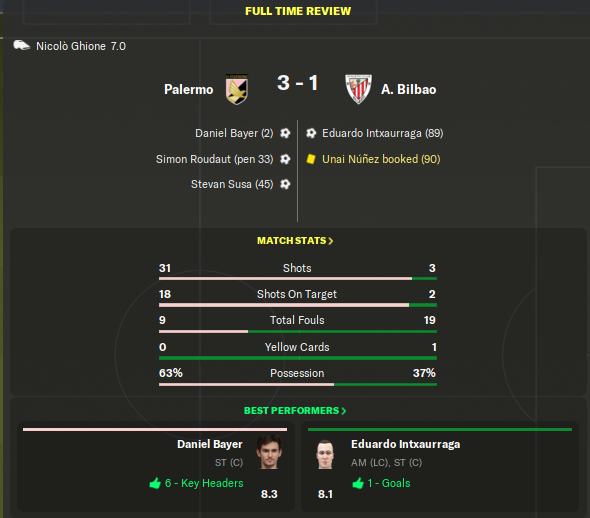 This pre-season we used every last penny we had to spend and certainly improved the squad. This is the most we have ever spent in one window. The total is a bit misleading as a lot of our deals involved installments. But we did spend a lot. The team now has more quality depth, with less older players. I would have liked maybe one more CAM or RW, but we had no more money left. On transfer deadline day we sold De Winter to Torino for £5 million as we had 4 left backs. We signed him for free too so a nice profit. 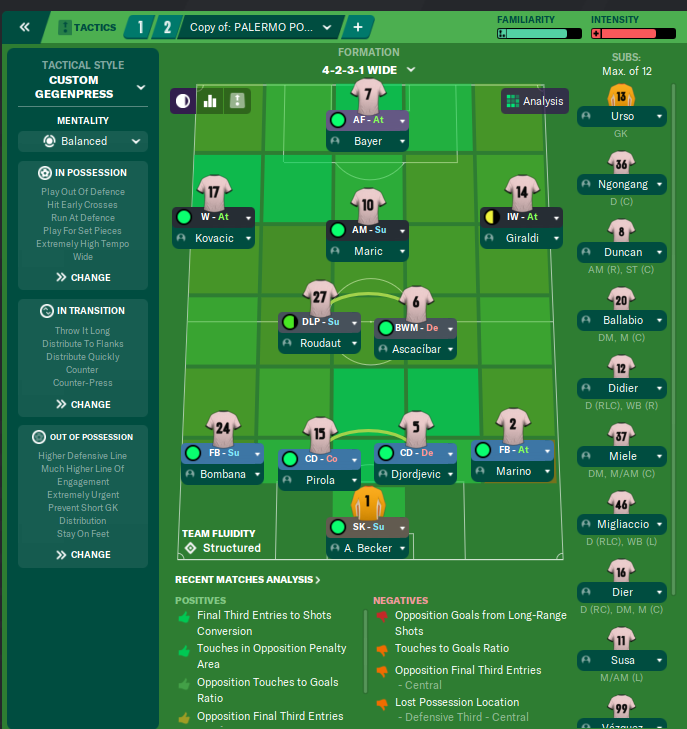 J_ames - Yeah Duncan is really good but Bayer might be better! What do you think of our recruits? Juventus, AC Milan, Inter and Lazio all have stacked teams and will take some beating...
Login to Quote

J_ames
2 years
Kovacic is a midget! Impressive signings, Bayer should bang in a fair few goals before leaving for a European giant, and I expect you to make a monstrous profit on his departure. I'll let someone else think of a 'punny' name for the renaming of a player

Dansco
2 years
Renaming a player eh, surely it has to be a Simpsons prank call name like IP Freely or Hugh Jazz
1
Login to Quote

Justice
2 years
The squad continues to evolve under your stewardship. A top 4 place is on the cards this season and maybe even a title challenge!
1
Login to Quote

ScottT
2 years
Bayer signed from Bayer Leverkusen... What are the odds!

The squad looks ready for a top-four finish this season. You came close last season but the ending saw you come undone. It was still a fantastic year nonetheless but Champions League football next season would be welcome.
1
Login to Quote

The squad has certainly been strengthened and that is great to see. Some big wages coming off the bill whilst adding some young talents who will look to make the difference for sure.
1
Login to Quote

Jack
2 years
Delighted that you brought in Bayer, he looks like a gem already!
1
Login to Quote

Lankyman22
2 years
I pretty much run the same formation as you! Though instead of usign a DLP I have them as an AP on attack which helps getting in more goal scoring positions or creating more chances going forward (might help?)

Can you show the stats of your Head of Youth Development? looks like he needs to be replaced if he is not finding you qualilty young players - someone with a high reputation might help reel them in

Sorry for all the comments!
1
Login to Quote

FMBlake
2 years
Hey guys, just want to say I am going to take a little break from Palermo. Don't know how long, planning on doing my own personal save, journeyman style starting with RB Leipzig, will post updates in the chat. Going to come back to this when I find the motivation again, just not feeling it this season, a couple of months in. Hopefully I will miss it and be back sooner rather than later!
1
Login to Quote

Justice
2 years
Enjoy the break - much deserved after the number of updates you have pumped out!
1
Login to Quote

ScottT
2 years
It's been an enjoyable read. I look forward to the return whenever that be. Enjoy your break!
1
Login to Quote

Feliks
2 years
Just caught up on this mate, really enjoyed the energy you've put in and look forward to seeing what you can come up with in your new endeavour.
1
Login to Quote

Eoin97
2 years
Deserved break mate! You have worked so hard on this story, being in season 11 already says it all hahaha.
1
Login to Quote

JmG88
2 years
Definitely a well deserved break, hope to see you come back to this mate
1
Login to Quote

Griffo
2 years
Enjoy the break from the men in pink!
1
Login to Quote