TheLFCFan
2 years
A massive risk in selling so many players on but a lot of money has come in that can be reinvested into the team in the summer. It hasn't been the best of years, but they happen. Hopefully that form can turn around now with a good push in the Europa League.
Login to Quote

Basically the second half of the season was shit, okay fair enough we knew it was going to be a challenge after selling so many players. We finished 7th, some how didn't get sacked.

In the transfer window I tried to sign real world class players and none of them wanted to come to Palermo. So I signed 5 good players, but they weren't great and had to over pay.

Pre-Season went well, beat Inter Milan 3-0! I though okay we can do well this season.

Lost first 4 league games, won both Europa qualifiers against Partizan, but honestly I was so frustrated and felt like I have done everything I can in this save and don't know what to do to take Palermo to the next level.

So I made the big decision to resign.

I holidayed forward until Jan and realized all the other leagues I have loaded are on 'view only'. I can't manage another team in Italy! So this save is over. What a journey we had, but I am excited about the opportunity to properly get stuck into a new save.

Simon Kjaer took over at Palermo. He changed to play a 4-1-4-1. I must admit I was being stubborn and naive about the tactics I was using and that probably hindered my progress too.. Going to holiday through a couple of seasons and will post an update on how Palermo progressed or regressed as a club.

What should I do for my next save?

Recommendations? I am thinking a 'journeyman' style save as I have never done one.
Login to Quote

Zed
2 years
Noooo! You had an amazing run though, this was a great story! A journeyman save could definitely be interesting, especially since you like longer-term saves.
Login to Quote

Griffo
2 years
All good things have to come to an end, congratulations on everything you achieved.

Next save, hmmm I think journeyman needs to be done at the start of an FM when you first get it so you have time to do it. Maybe something involving international football.
Login to Quote

ScottT
2 years
I didn't expect this at all. Wow. Good luck with whatever you do next.
Login to Quote

Jack
2 years
Oh man, that is cruel. At least it opens up another opportunity for you!
Login to Quote

TheLFCFan
2 years
A shame to see this come to an end. An excellent bit of work and I look forward to whatever is next!
Login to Quote

So... after resigning at the beginning of Season 15 and growing increasingly frustrated with the Palermo save, I simulated forward until the end of the season. Simon Kjaer managed to pull Palermo back to finish 8th in the league but he was sacked at the end of the season. I took a new job (Wolves) and managed them for half a season, form was up and down but it just didn't feel right. In January I signed Daniel Bayer for Wolves and had a sniff of what use to be... this made me want to go back and try again. Of course I saved the game before I resigned, so I had the opportunity to go back and give it another shot. So here we are, back again, the Palermo story continues.

Welcome to Season 15
At the end of last season we finished 7th in the Serie A, but had a lot of money to work with to bring players into the club. £138 million was available. My job was to try and spend it wisely and improve the squad as much as I could - bear in mind at this point in time, I was determined to play 5-3-2 with a libero, hence why I made some of the following transfers. 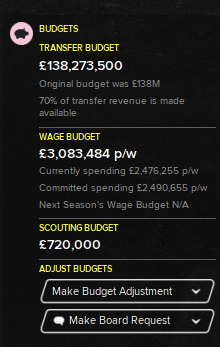 The board expect us to be challenging for the Serie A title this season and compete for silverware. This season we are in the EURO Cup II, so I am hoping we can do well, as one of the favourites in the competition. We know Serie A will be difficult, especially because of our poor start.

Before the season began, we were predicted to finish 4th in the league, Inter Milan once again the favourite to claim another league title.

In the transfer window I was a busy boy. A lot of the top players I was scouting and wanted to sign, simply didn't want to come to Palermo. So I decided to spend large on a few important positions. Chopko signed from Man City as our new first choice left back - a Portuguese international. Vaughan signed from Bournemouth as a potent pressing forward. Cherrez signed from Real Madrid as a back up keeper for Aschenbroich. Lopez signed for a bargain, and will not feature too often but be a decent back up option, likley to be sold for profit. Lastly, Baltic signed, a young promising libero who could develop into a quality defender. I also offloaded a few players who just wouldn't feature this season.

Pre-season actually went quite well. We competed well against Real Madrid and Man City, then went on to win the rest of our games, and amazingly beating Inter Milan 3-0!

As you can see our poor form to begin the Serie A season was not what I expected after a good pre-season and spending a lot of money on new players. Although we started poor in the league, we looked dominant in Europe. It is at this point I had resigned, but now I am back with a fresh mind, and more positive approach.

I am hoping I can turn the clubs fortunes around - I cannot seem to stay away from this save and deep down know it is because I haven't yet won the league. Surely I can do it!

Thanks for all the support (sorry for the muck around)

ScottT
2 years
You walk away only to be pulled back far too often.

Griffo
2 years
They have been really good in leaving your club vision the hell alone haha, I have like six or seven tasks and I hate it
Login to Quote

Zed
2 years
The saga continues! Hope you can win the Serie A title soon and fulfil your own personal goals!
Login to Quote

Jack
2 years
Some good performances in Europe, but wow. That start in the league is not great at all.
Login to Quote

My first game back as Palermo manager was against the best team in the league, Inter Milan. Within 10 minutes into the game my defensive midfielder Kane Talley picked up a straight red card, I thought then that I was going to get dominated. Although, at half time Inter Milan only lead 1-0 thanks to a goal from Francesco Setti. In the second half we managed to pull a goal back, Daniel Bayer scored the equalizer. Inter Milan continued to dominate the game and pile on the pressure, in the 66th minute Fabio Silva but the Serie A champions 2-1 up. Then in dramatic fashion, Srdjan Milosavljevic headed in from a wide free kick in the 94th minute to earn us a hard-fought point! Inter Milan would have been furious having dominated the game and playing with an extra man for 92 minutes. A fantastic result for us and proving that we can compete at the highest level in this league.


A great result against Inter Milan 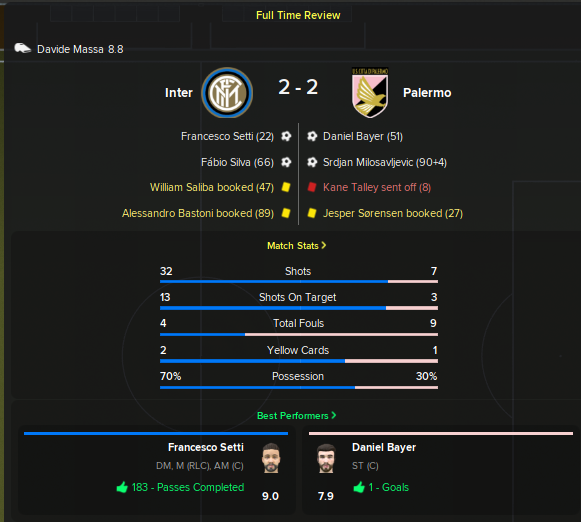 After drawing with Inter Milan we managed to smash Besiktas at home 6-0, Bayer once again the star, scoring a hat-trick. We then scrapped a 1-0 win over Benevento, Bayer with the only goal again. In the Italian Cup 2nd Round we faced SPAL and knocked them out with a 2-1 victory, Bayer again scoring both the goals. Then we faced Torino away in the league and managed to get a late goal thanks to our experienced defender Pirola, a 1-0 victory. We finished September with another good win in Europe away against CFR Cluj. Maric opened the scoring and Daniel Bayer added two more goals to his increasing tally.

An amazing month for us at Palermo. Daniel Bayer is in the form of his life, scoring 9 goals this month alone! He is going to be a crucial part of our season and aiming to finish as high as we can in the league. In Europe we look to be a dominant force early on and being one of the best teams in the EURO Cup II, we should be able to fight all the way to at least the semi-finals this season.

Walkinshaw - Cheers mate, I am happy with the signings too, some more than others...

ScottT - I know I do lol it is kind of embarrassing lol, it's like an addiction this save!

Griffo - You are spot on mate! And the board are on my side keeping me on after last season's poor performance

Zed - I hope so too mate! Would be an amazing achievement

Jack - I know right... we look a different side that plays in the league to Europe, much better this month though.