“Conor, mate,” Michael said over the phone. “As you’d expect, we’ve got a problem here with that twat bubble from the Journal after yesterday’s events. Obviously it’s not going to look good on you or me. Have you had a read of it yet?” he asked.

“No, I’m getting on the laptop now. Thanks for the heads up, boss. I appreciate it and for what you did yesterday.” Conor said as he hung up the phone and picked up his laptop from his bedside.

There the article was: declaring that Michael O’Donovan could not answer directly why he had chosen Conor McDonald - a 21-year-old recent graduate from the University Campus of Football Business - as the new manager of Cobh Ramblers, despite never having a job in football management previously.

It proceeded to state that Conor was “well out of his depth” and that O’Donovan’s outburst in the home environment was like “seeing a father try and protect his terminably vulnerable son from the bailiffs”. Whatever Sarah would have said was bound to look bad on the club and both Michael and Conor but he never expected it to be this bad.

Logging onto his locked Twitter account, Conor felt like he was opening a door to a room where everyone was talking about how shit Conor was for an appointment at a football club.

He typed in the club’s hashtag and East Cork Journal’s official Twitter account where they had posted a link to an article. He looked at the comments that several fans had made on the different searches and Conor had never felt so alone in his life. There were people wondering what on earth he was doing managing a football club, a list of expletives aimed at Conor’s appointment and Michael O’Donovan’s judgement.

Conor closed his laptop and looked at his wardrobe for two minutes in silence, gathering his thoughts. His mind swept from a defeatist mentality to feeling - as Sarah Kelly called - ‘out of his depth’. Coming to the end of his silent staring he combined all of those bad thoughts surrounding his new role and exploded into an outburst of ambition and enthusiasm. He wanted to bring those naysayers to Limerick for his debut league match away from home and prove every last one of them wrong for ever doubting him.

Conor had earned his position here through hard work on a personal level that most of these people had no knowledge of, it was time to make the most out of it.
Eoin: It's certainly good for Conor to know he has his back but it's also understandable that O'Donovan wants to protect his club's integrity, especially in a time like this!
Scott: You might've thought so, but it seems like she's got a lot of Cobh fans round to her way of thinking.
Griffo: A torrid introduction to life in the management world for sure!
Seb: No goodbyes just yet...
Login to Quote

Eoin97
6 months
No better place to sort sh*t out than Limerick I can tell ya boy! Hopefully Conor can make Sarah choke on her words and prove everyone wrong 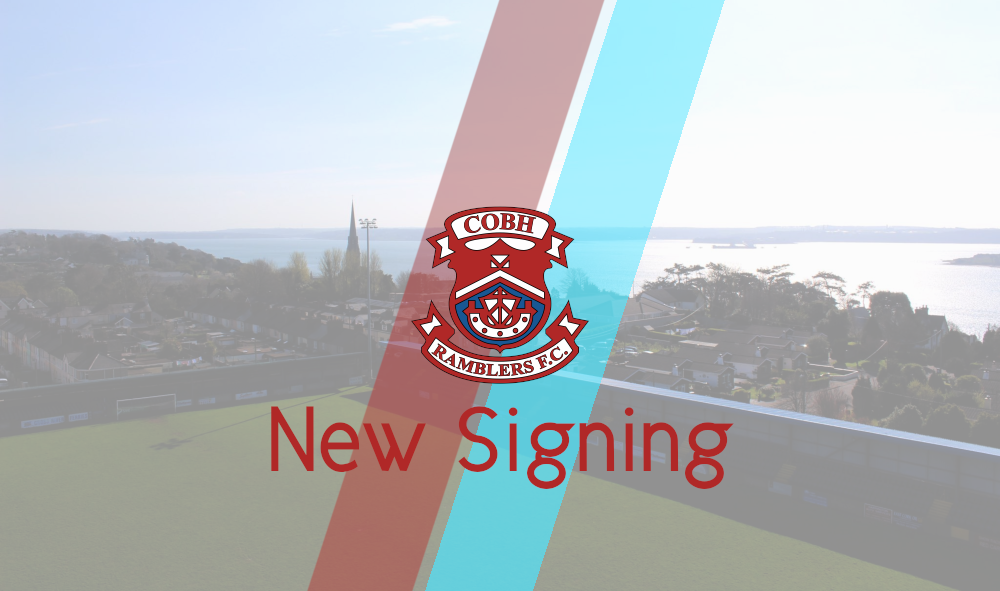 Cobh Ramblers FC are pleased to confirm the signing of midfielder Eoin Porter on a free transfer.

Eoin spent two seasons at Wexford FC and was a key member during their Airtricity Premier League campaign of 2016, making several first-team appearances under manager Shane Keegan at Ferrycarrig Park.

The 20-year-old unfortunately suffered relegation with Wexford in that year but became increasingly more important for the first-team following their drop into the First Division for the 2017 season under Damian Locke.

Prior to his move to Wexford in 2016, Porter graduated through the Waterford United academy, making his first-team debut in a friendly in 2015 against Bray Wanderers.

Speaking about the move, new Rams manager Conor McDonald had this to say,


”Eoin is a talented young player and we are very happy that he has joined our senior squad. He is a versatile player and comfortable in both central midfield and more attacking positions.
We are going through a turbulent spell with changes afoot in management so he is coming in at a good time. Eoin will look to push into the starting eleven straight away and we are looking forward to seeing how he progresses.”


Porter will wear the number twelve shirt for Cobh.

Eoin: And you'll certainly be happy to know that Eoin's debut comes in Limerick

Eoin97
5 months
Eoin Porter came from the Waterford United academy. I was born in Waterford, my mother is from there, my great grandfather was a football manager of Crusaders in Waterford, my name is Eoin. I live in Limerick. Thanks for writing the start of my autobiography

Great signing. Hopefully he can help Cobh
Login to Quote

TheLFCFan
5 months
Looking forward to Conor proving his haters wrong, especially Sarah. Hopefully the addition of Porter is a good one and helps in doing so.
Login to Quote

Conor McDonald’s first month with Cobh Rambler’s has gone down a storm with two wins out of two in the league and two draws against divisional rivals in club friendlies throughout July.

Due to the split nature of the First Division existing before Conor’s arrival, Cobh Ramblers have not managed to rise up a position in the league with thirteen points still separating them and 5th placed Drogheda United with eight games of the Airtricity First Division remaining going into the final few months of football.

McDonald’s debut fixture in charge of The Rams came against Limerick at Markets Field in front of a 1,536 crowd - one of the division's highest attendances this season - with 37 fans making the hour and a half long trip from Cobh to Limerick.

Those away fans were glad that they had made the distance as Cobh put in arguably one of their strongest performances of the season as they ran out 3-0 winners with a brace from the previously misfiring striker Cian Leonard and a goal from Ian Turner.

With two weeks until their next league fixture, Cobh arranged a friendly against top of the league Shelbourne and got a hard-earned 2-2 draw as a precursor for their 2nd August away game in the First Division.

On the return to league action, Cobh bagged another three points from 9th placed Athlone Town in McDonald’s debut home league fixture at St. Colman’s Park with a 2-0 win. In the fifth minute, Ian Turner scored the Goal of the Month winner with a stunning 31-yard free-kick to give McDonald’s men an early lead. New signing Eoin Porter who joined the club at the beginning of the month also got his name on the scoresheet for his first goal for the club to double Cobh’s lead.

With another fortnight before Cobh’s next game, The Rams rounded off the month of July with an arranged friendly against 3rd placed Bray Wanderers, fresh off the back of two 3-1 victories against Wexford and Drogheda United. McDonald’s team impressed again but neither team were good enough to win the game which finished with a scoreless draw.

It can be argued that despite the lack of league fixtures, McDonald is still well in the running for July’s Manager of the Month award - a huge achievement considering the controversy surrounding his appointment in late June.

Shelbourne (A) - League
Longford Town (H) - League
Finn Harps (H) - Ford Cup 1st Round
Wexford (A) - League
Eoin: It seems like Porter could be our mutual favourite here, the way he's going on at the minute!
Seb: His first month has gone tremendously well and has quietened the critics for now but there is no doubt that he will be monitored in the local press intently.
Login to Quote

ScottT
5 months
Football fans can be incredibly fickle. They will be fully behind the lad very soon with results like that.
Login to Quote

Eoin97
5 months
Loving the graphics on the header! And a decent start for Conor McDonald as gaffer. Also nice to see my other half doing bits 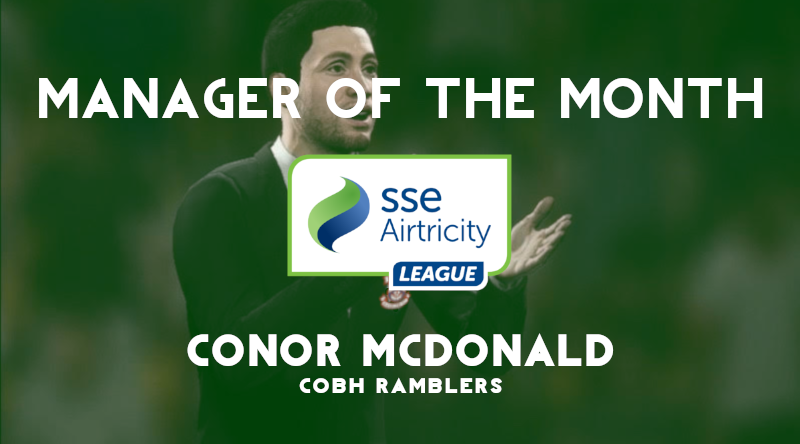 Cobh Ramblers’ Conor McDonald has been named July’s Manager of the Month by the Airticity First Division.

The Rams went the month unbeaten in the Irish First Division, which included a 3-0 win over Limerick at the start of July.

“If it was up to me, I would have probably awarded it to Gary Cronin for the job he’s done at Bray Wanderers,” admitted McDonald.

“To be honest, it’s people like Gary who will drive us on in the future to make sure we are better every single week,

“The two matches we have been involved in have been absolutely brilliant and for the supporters, winning 3-0 against Limerick in my first game was a fantastic way of getting off on the right foot.

“I’m delighted with the way these players are now being talked of in the community and winning this award is down to their hard work, belief and efforts in July.

“I would also like to dedicate this award on my behalf to my family, the people in university and those I have worked with at Burnley and Tranmere and certainly to Sarah Kelly of East Cork Journal for making me work harder to prove her wrong.”
tedbro20: Thanks mate, those results have certainly paid off!
Scott: It's two results, but it's two massive results to get things on the right track.
Eoin: Cheers mate! The other Eoin has been doing marvellously too