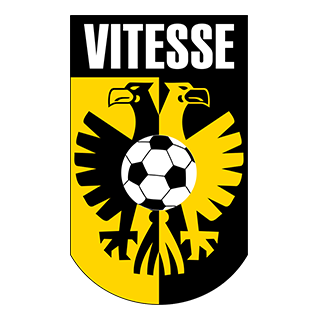 Vitesse have a very small history despite having being founded 127 years ago. They have never won the top division and have only lifted the TOTO KNVB Beker once that was only 2 years ago. They have also lifted the 2nd division title twice. So to have only won 3 trophies in that length of time isn't great. The club has produced a number of dutch internationals such as Roy Makaay, Ricky van Wolfswinkel and Davy Propper. The latest off the production line is young Thomas Buitink who is a 19 year old Advanced Forward who can go on to lead the line for the national team and he will be who I am building the team around for the future.

As usual with any new start we needed to evaluate the current staff at the club and some of them just didn't cut it so I went out and had a lot of conversations with perspective new members off staff and offered a few of them contracts. 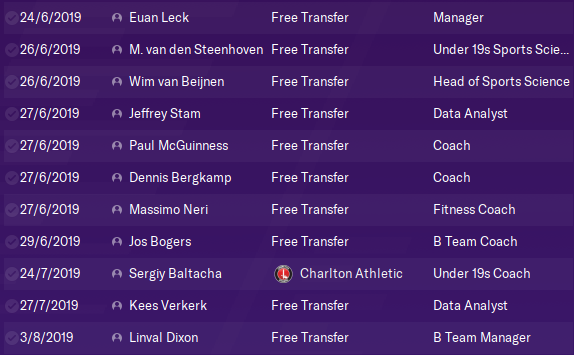 We ship out 2 players in Matus Bero who was never going to be a first team player so the money can be reinvested into the squad. Tim Matavz's contract was up at the end of the season and at 30 didn't have a long term future at the club so thought best it was to cash in on him. We also let Roy Beerens leave the club on loan as we couldn't get a deal done that the board was happy with to let him go permanently.

We have also ended the loans of Nouha Dicko and Jay-Roy Grot who return to their respective clubs to free up their wages.

We have only made one permanent transfer so far in the transfer window and we managed to snap up Naci Unuvar up on a pre-contract. He is a great youth prospect coming through the famed academy so to be able to snatch him away is a real coup for the club if we can continue to develop him toe realise his potential.

We have also brought in two players on loan in the form of Billy Gilmour coming over from Chelsea with them paying his wages and Joshua Zrikzee coming back to Holland from Bayern.

We still have plenty of cash to spend and have a few deals in the pipeline.

The expectation for the league is pretty low and we should be able to make the top half comfortably. On the cup though it will all depend on the draw and hopefully avoiding the big teams/

ScottT
2 years
Best of luck! Good to see Vitesse continue to be Chelsea's 'B' team for another season with the loan signing of Gilmour.
Login to Quote

Griffo
2 years
Zirkzee is a great pick up for the season, looking forward to seeing how he does
Login to Quote

Eoin97
2 years
Best of luck mate! Hopefully you can finesse Vitesse to glory...
Login to Quote

We have a tough set of fixtures to start off with with us facing AZ, PSV and Ajax all in the opening month. We start off with a home game against AZ and the lads really impress me as we run out well deserved winners. PSV away was always going to be tough but Buitink got us off to a quick start with his first goal of the season after only 10 minutes but it was pegged back quickly before Linssen gets the second on the stroke of the half hour. PSV then race to a 4-2 lead through the opening half hour of the 2nd half before Buitink grabbed a 2nd just before the final whistle.

We then had a bit of an easier game against PEC Zwolle but it didn't all go to plan as Araujo was sent off for a terrible challenge in the 11th minute which lead to the opening goal for Zwolle. Buitink grabbed a quick equaliser though just 4 minutes later. Zwolle then got their 2nd with 4 minutes left of the match but we keep fighting as Buitink comes to the rescue in the 92nd minute but it wasn't over yet as Unuvar scores on his debut in the 95th minute to become the youngest ever scorer in league history. Next up was Ajax and what can I say but I got the tactics totally wrong here as they were 4-1 up at half time with Buitink getting our only goal.

We were lucky to have an easy game afterwards to get the confidence back up as Bazoer and Buitink get the two goals.

We returned to the transfer market to sign 4 players this month with 3 of them being permanent. We bring in Ronald Araujo on loan from Barcelona to add a bit more depth to our defence.

The first player through the door is youngster Yusuf Barasi who we paoched from AZ since he was on a youth contract.

Next is Lovro Majer who joins from Dinamo and he will be going straight into the starting XI and should develop nicely here.

The final piece of business for the month we do what all good Dutch clubs do and raid South America for Julian Alvarez who Joins from River Plate for the RW.

Overall I feel we have done well in the transfer window with signing a number of young players who will add a lot over the next few seasons.

ScottT hopefully I can develop Gilmour for them over the season. Will be happy to keep getting some decent players from them
Griffo Cheers, he'll be playing 2nd fiddle to Buitink as long as he's scoring
Eoin97 cheers mate, fingers crossed.
Login to Quote

Jack
2 years
A couple results in there that you certainly had to expect such as the PSV and Ajax games. Some promising incoming signings though!
Login to Quote

You've got to love the international breaks to have a nice quick month and we have the 2 week break at the start with a lot of our players away with the respective nations. We get started against Fortuna Sittard and we struggle to make the break through before bringing on Zirkzee and Musonda with the 2 of them getting the 3 goals. Next is RKC Waalwijk where Buitink and Linssen get a brace each for a nice big win. We round the month off against Utrecht where we take the lead in the 2nd minute and then fall 2-1 behind before we round off with an excellent final 15 minutes where we get 2 goals to get the 3 points.

Eoin97 hopefully do the job and if not then sell them for a profit.
Jack yeah just didn't expect Ajax to beat us that badly thought
Login to Quote

TheLFCFan
2 years
Some very good pieces of business in there, in particular Majer and Unuvar who will both play massive roles for you in the future I imagine. Some good results so far, ignoring that thumping from Ajax. Good job.
Login to Quote

ScottT
2 years
A strong trio of results. Utrecht can be a difficult side to contend with.
Login to Quote

We have a great month as we managee to go unbeaten over the month but it was more difficult than it looks. Against Heerenveen Gilmour gets the only goal of the game in the 11th minute. We had a much better game against Groningen where we raced to a 3-0 lead with Buitink getting another brace with Clark getting the final all within the opening half hour before Groningen pull one back in the 90th minute.

The final league game of the month we welcome VVV-Venlo where we labour to a 1-0 win with the goal coming in the 73rd minute through Linssen. We round the month off against NAC Breda where all 3 goals are scored int he first half. We have a nervy 2nd half as we wen't down to 10 men in the 55th minute but we manage to hold on for the 3 points.

Buitink has been on fire so far and has 12 goals in 12 games so he's definitely stepped up this season.

TheLFCFan Yeah planning for the longterm here build a team for the future and the results will come.
ScottT There are quite a few in this league that are difficult to break down
Login to Quote

Eoin97
2 years
A sensational start to the Eredivisie season by a seemingly strong Vitesse side. Keep it up!
Login to Quote

We are performing well above our expectations as our defence is a big part of how well we're doing as we concede only 1 goal across our 4 games. Against Heracles Buitink gets another brace as he just keeps adding to his total. Sparta Rotterdam he puts in another repeat performance with his first goal coming after only 2 minutes and his second was 91 minutes later. Feyenoord Unuvar had his game of his career as they just couldn't cope with the talented youngster as he scored in the opening minute of the game before finishing it off in the 88th minute. We round the month off with Tannane getting a 2nd half brace against Ado Den Haag.

Eoin97 Its all going well but will it continue. We top the league but Ajax do have 2 games in hand
Login to Quote

ScottT
2 years
Absolutely flying! Your defence is water-tight beyond belief.
Login to Quote

You are reading "A New Era in Dutch Football - Vitesse".