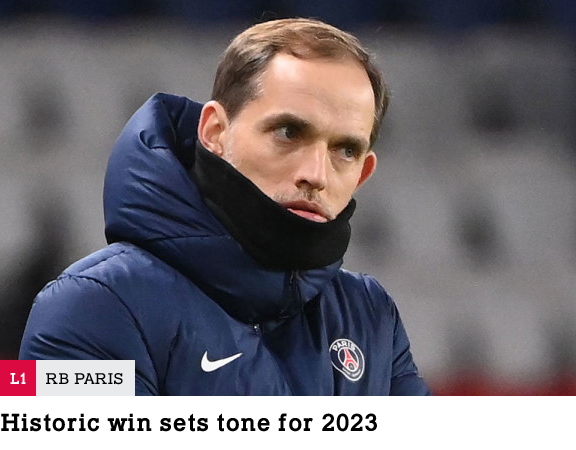 A long break, broken by some unwanted friendlies, would be extremely valuable for Patrice Evra. Even with a few bothersome injuries, RB Paris would walk into the second half of the season ready for what could be a brutal month. The Coupe de France would start off the year and could help stretch the month into a ten game affair if they keep winning. There is also some hope that the World Cup will help weaken teams with players that participated, like Paris SG or AS Monaco, but they can’t rely on that to make it through the whole season.

Despite Evra trying to steer clear of trash talking he found himself the target of FC Metz’s Stéphane Jobard loud mouth. Their opening game of the Coupe de France would be peppered with talk of RB Paris being “overrated” and “inflated” thanks to Jobard.

“I’m not really interested in responding here, Stéphane is just trying to fire up his guys, I’ll settle this on the field” is all Evra had to say about it officially, but inside sources report that he tried to use this to motivate the team before a long run.

It’s questionable if the approach worked for either team after a 1-0 RB Paris win, but the game wasn’t as close as the score would indicate. FC Metz had a few openings, but RB Paris’ second squad was in total control and advanced without much trouble. The win would be followed by a happy yet worrisome milestone during a 2-0 win over Nice. Dillon Hoogewerf would score his first goal of the season, an event met with much fanfare, Evra is lucky that the team managed to score elsewhere otherwise the season might look very different with your starting striker a blank for half the season.

The good start to 2023 would be nothing compared to the reaction to the biggest game of the month, a trip to Parc des Princes to face off against the unstoppable beast of PSG. This game was a bigger deal for RB Paris, though it was a little hard for Evra to put too much focus on it with a brutal run of games coming up. Three games in six days would have his head spinning and most media outlets painted RB Paris as a speed bump on PSG’s way to the top, and perhaps Thomas Tuchel could not be faulted for overlooking the noisy neighbor who had never once beaten his side. Evra would also be without two of his best players in Danny Malitoli and Cristian Ferreira, who was back but failed to be match fit, forcing him to play youngsters Younes Boussif and Dennis Waidner. What ended up happening would go down in RB Paris’ history as one of their biggest milestones as a would-be champion. Tuchel’s 4-4-2 proved to be an issue with RB Paris struggling with their two forwards, focus on Kylian Mbappé made things much easier for Gabriel Jesus as the French superstar pulled defenders all over the field. So easy that Gabriel Jesus nearly scored at 13’ but banged one off the post, things looked to be going PSG’s way before things violently swayed in the other direction. Just a few minutes later Boussif would announce himself with a stunning goal off a free kick just outside the box that had shades of Christano Ronaldo with a powerful dip that found the side netting. The goal seemed to turn PSG on their head and their early success gave way to a high paced RB Paris attack that kept them on their heels, it wasn’t until just before the half that Gabriel Jesus would get another chance and this time he wouldn’t miss. 1-1 at the half felt like a loss for PSG as Tuchel, known for expressing his displeasure, had quite a lot to say to his side as they walked off the pitch. Hans-Günter Reus would be swapped for Diego Raposo at the half, the Brazilian midfielder had suffered a pulled thigh and couldn’t go on. Things didn’t look good on paper, but Evra’s faith in club youth paid off as Reus put up his best performance to date and helped shut down PSG’s midfield. Even more importantly, a poorly cleared ball off a corner would find Reus at 65’ and he would bang the ball in to stun the hosts 2-1. The next twenty-plus minutes of the game felt like a world cup final, at least for one set of fans, and as PSG couldn’t pull level they seemed more and more desperate but couldn’t get through. When the whistle blew RB Paris had their first win over PSG in club history and found themselves getting closer to Champions League qualification.

“I’m very happy for them, this win was for the fans. This is where the club is headed, we will enjoy this one but we have more games to play” said Evra, covered in champagne, as the team tried to forget about the schedule crunch coming up.

The next few games would be almost a blur with the second squad given the task of helping the first squad rest. A 2-1 win over Reims and a dicey 3-2 win, taken into extra time, over Strasbourg in the Coupe de France would show that RB Paris are willing to gut out wins. Mauro Amorim would have a 90+1’ goal disallowed in the last one, but they still managed to keep it together and win. The downside of the win would be a date with PSG in the next round, few thought they could pull off the impossible twice in a row. A 1-0 win over Sochaux, with Youssef Camara scoring the only goal, would be the last hurrah for a worn out side. Six wins in a row turned out the be the best Evra could muster before injuries and exhaustion hit the club.

A Hoogewerf double would be spoiled by some of the worst defending RB Paris have put on the field all season. The timing was atrocious as well with Lyon sitting on top of the league and RB Paris just two points behind them in second, a win would put Evra’s side on top of the league and get them clear of the pack. With just five points between first and fifth, and AS Monaco falling fast, a win could help get them out of the crowded Champions League race. A 3-0 lead at 52’ would crumble with stupid penalties giving Lyon free kicks close to the box, two of them turning into goals before Victor Osimhen put the final touch on a Route One goal in stoppage time to make it 3-3. The draw would put RB Paris third, tied with PSG, and hold Lyon in first by a single point.

The next two games, with PSG looming in the Coupe de France, couldn’t have been more mind numbing. Two 0-0 draws, against Nîmes and Brest, showed how worn down RB Paris were. Two teams they could have beaten, should have beaten, but instead collapsed as much as possible without losing. Meanwhile Strasbourg would stun Lyon 1-0 and PSG would move into first, RB Paris would finish the month third but tied on points with Lyon.

Round 2 with PSG in January would show the nature of the sports world as Evra would end the month getting savaged by his own fans. Beating PSG for the first time seemed to flip a switch in terms of expectations, and now that he had proved it was possible some felt it was now necessary. The first criticism came from sending out the second squad, who have played all of the cup games, with many accusing Evra of failing to take this game seriously.

“I’m offended by that assumption” snapped Evra after the game “all of our players contribute to the team, we get great young players here because they know they can play. I refuse the pull them out because we play PSG instead of someone else.”

This time PSG asserted themselves and headed into the half up 3-1 thanks to an Mbappé double and Marquinhos heading one in on a corner. Rasmus Rasmussen had RB Paris’ only goal, but by 39’ it felt useless. With a PSG win almost inevitable two 60’ subs turned into a showcase for how good RB Paris could be in the future. Kévin Blanc and Octávio Martinho came on at LB and LW and immediately took over the game down the left flank. At 72’ and 79’, both on passes from Blanc on the end line, Martinho would score to make it 3-3. Just a few minutes later Gabriel Jesus, the potential savior of their first meeting, threw an elbow in Blanc’s face and found himself seeing red over the incident. There wasn’t much game left to play and things looked to be in RB Paris’ favor, but Tuchel had an ace up his sleeve and opted for a Route One / counter attack approach until the end of the game. Practically seconds from extra time Mauro Icardi would find an opening, making a tired Pierluigi Pinto look like a fool, and score a winner at 90+2’. A 4-3 loss would be the final insult to a month with ten games, now Evra would need to focus on the league and a meeting with FC Red Bull Salzburg in the Europa League. 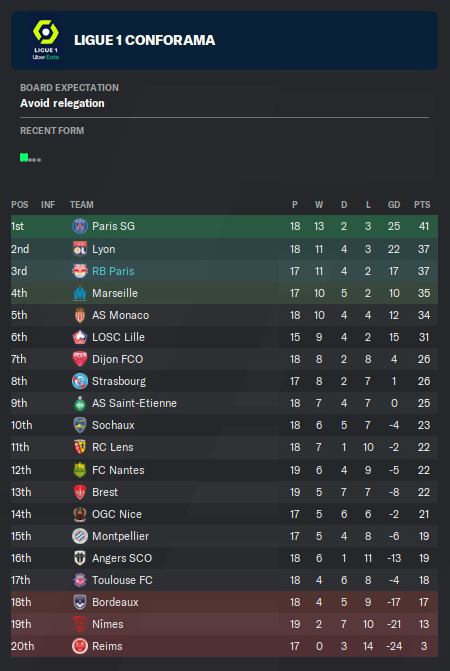