Tango
9 months
apparently, the team has a problem between the pitch and the bench

off to a wobbly start, but Anderlecht shall rise again
Login to Quote 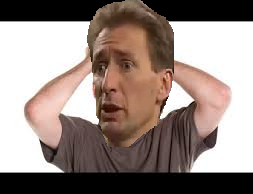 ANDERLECHT: Club Brugge takes a lead of 5 points after Anderlechts late draw against Cercle Brugge. After Anderlecht took their game up and won twice in a row against Eupen and Waasland-Beveren they again weren't concentrated till the end and 25 seconds before the whistle went, Cercle scored the 1 - 1. At the west of Belgium, Club Brugge didn't failed and kept 3 points at home against Leuven and at Standard. Club Brugge who's in Group C of the Champions League, joining Celtic, Manchester City and Zenit. Twice a 0 - 2 defeat at Celtic and home against Man city.
Tango: Hoped that Club Brugge was a bit tired after their CL run. But at the moment they didn't failed.
Login to Quote

Tango
9 months
they'll drop some points towards the end of the season. I'm positive
1
Login to Quote

Anderlecht leads first defeat against last club in the ranking 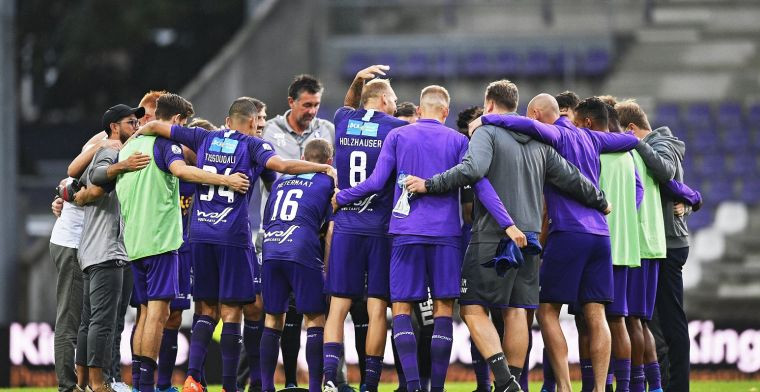 ANDERLECHT: After winning twice in a row the players of Pol de Tremmerie underrated Beerschot who are last in the competition, a painful 3-1 was everything that Anderlecht deserved,
with a very strong Holzhauser who scored once from a free kick of 30 meters and gave 2 assists. Pol de Tremmerie showed interest in Holzhauser a month ago, with his contract expiring in the summer, Pol will hope he can sign Holzhauzer. "He's one of the best playmakers I saw in years in Belgium." 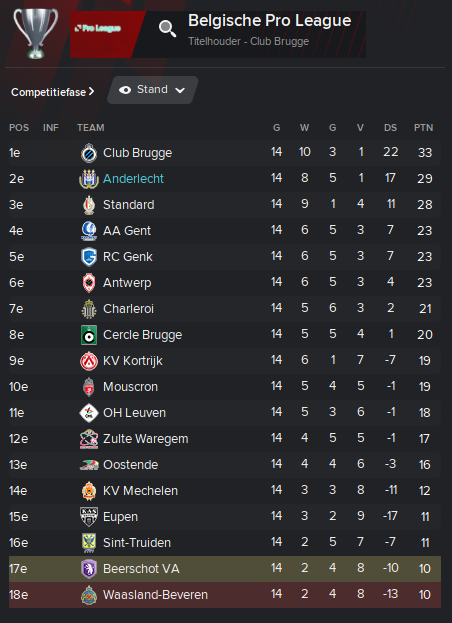 Tango
9 months
YOU FINALLY GOT ONE
1
Login to Quote

Jack
9 months
A very rough spell, but you seem to be getting it back on track now! Go get them!
Login to Quote

ANDERLECHT: Fine December for Anderlecht, 0 - 0 at home on Saint Nicholas against OH Leuven, a very nice win at Liège and 17yr-old scoring 4 goals in his debute! Also the current topscorer and 2nd in the league list, Percy Tau scored a hattrick at home against Charleroi, taking distance from place 3. Club Brugge his lead of 4 points stays the same. 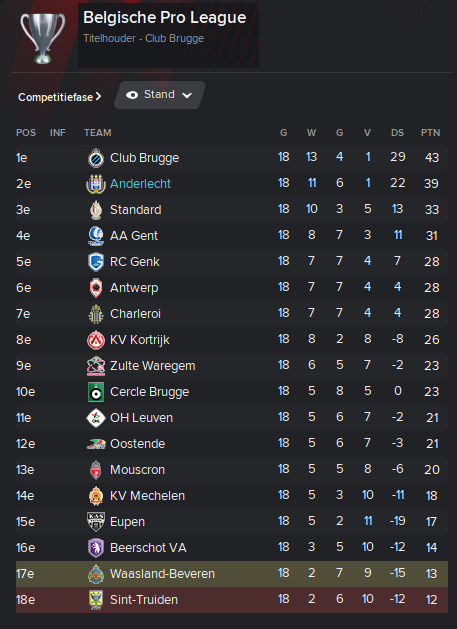 
Michel Vlap who scored 8 goals and gave 6 assists in 17 games will be missing the game against Club Brugge cause of an injury, the manager and the medical staff are seeiing to get him fit by injections.
Tango: I saw a very bad effort of our lads against Beerschot, they played like they were already 2 - 0 ahead against the last. ** Thanks for noticing that the rankings were missing mate!
Jack: Yes, but with the upcoming game against Club Brugge will probably make a lot out for the title, but there's also a play off at the end of the season.
Login to Quote

Tango
9 months
can we see the table so we know how big was the damage of that poor sequence?
1
Login to Quote 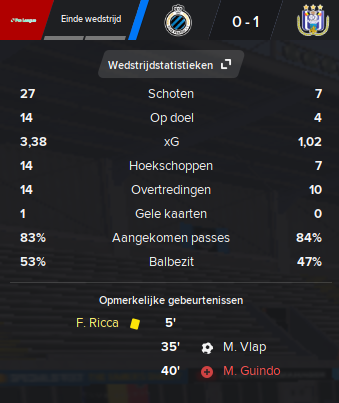 ANDERLECHT: RSC Anderlecht won a super exciting game at Club Brugge, looking at the stats this was a very undeserved win for the lads of Pol de Tremmerie, a lot of players were playing under their form, they were very impressed by the high pressure of Club. But one man saved Anderlecht, Hendrik Van Crombrugge. 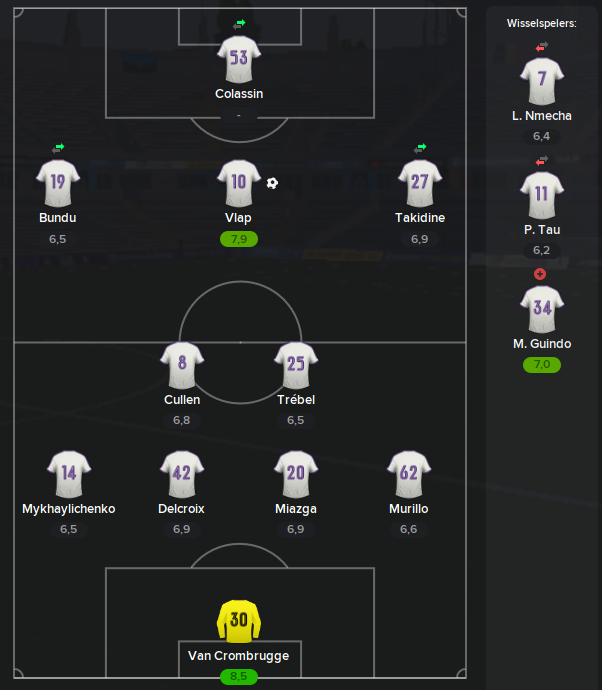 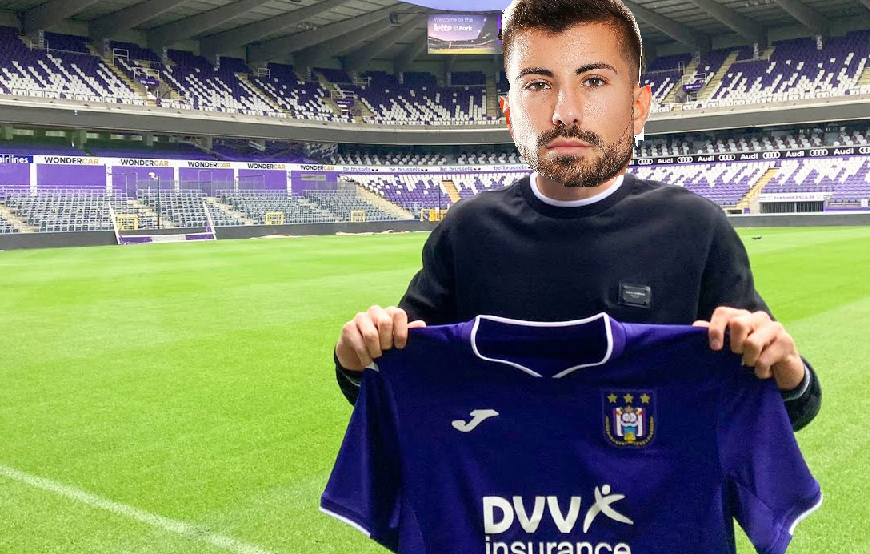 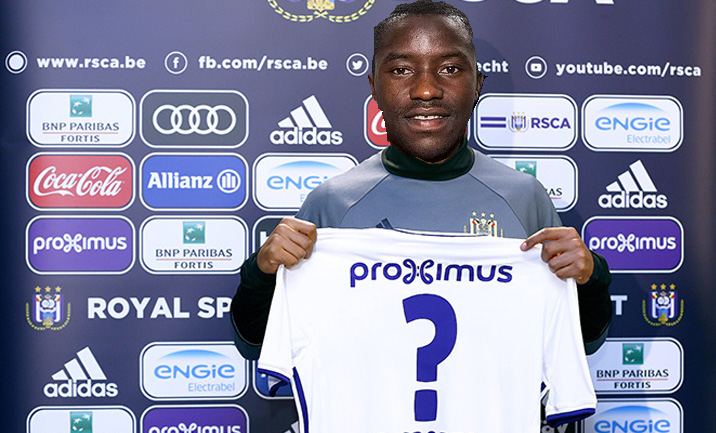 Tango: I've put them in the post above, thanks for noticing!
Login to Quote

Tango
9 months
well, this victory does not solve your situation but definitely puts you right behind Brugge's ass
1
Login to Quote

TheLFCFan
9 months
A great goalkeeping performance there allowing you to take home the points in a much needed win, congrats.
1
Login to Quote

Mauve
8 months
Cause of my on going finals the story is currently on a hold.
Login to Quote

Justice
8 months
Good luck in your finals!
1
Login to Quote 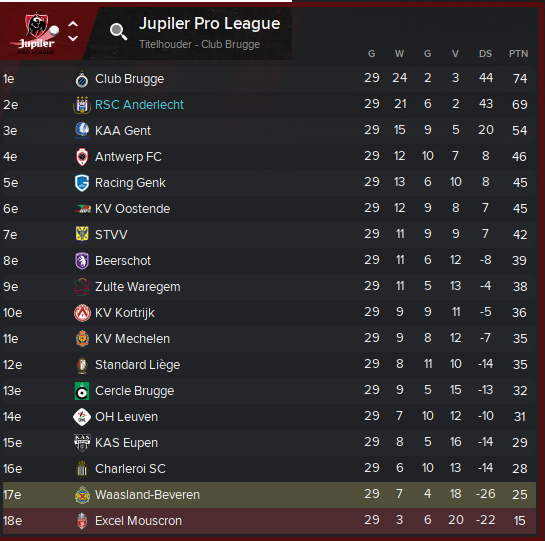 Club Brugge 5 points ahead on Anderlecht


After 29 games with 5 to come and then a Play-Off with top 1 - 4 and 5 - 8. Anderlecht took a very important win at home against Club. In the 81th Fashion Sakala made his first goal for Anderlecht, Sambi Lokonga scored a beautiful free kick in the 90+3th minute. Looks like the race isn't over for the championship. 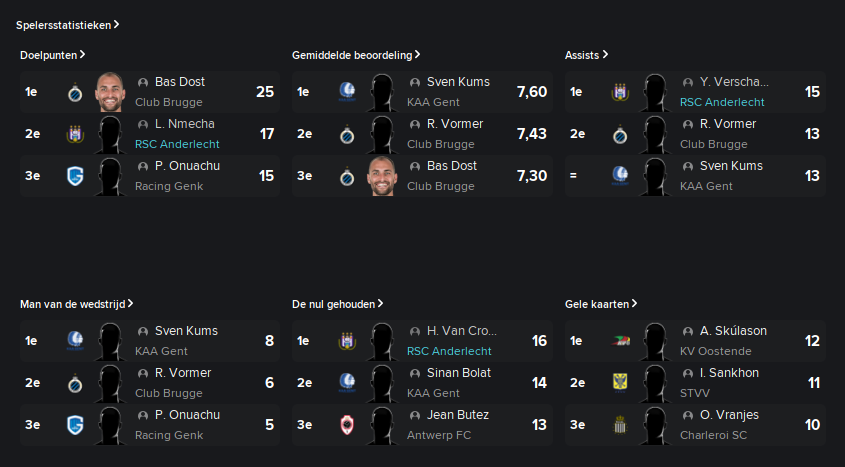 What a disaster for the Mauves, 0-0. Anderlecht was leading the game in the last 10 minutes, with chance after chance, 90+1th minute there was a fault on Nmecha, he scored 26 goals in 32 league games (7/7 penalties), his first miss was the most important one, a good save by Mingolet though. With 3 games ahead, Anderlecht looks like it missed their last shot to the title, though Club Brugge has only got 1 point more than Anderlecht, a lot can happen. 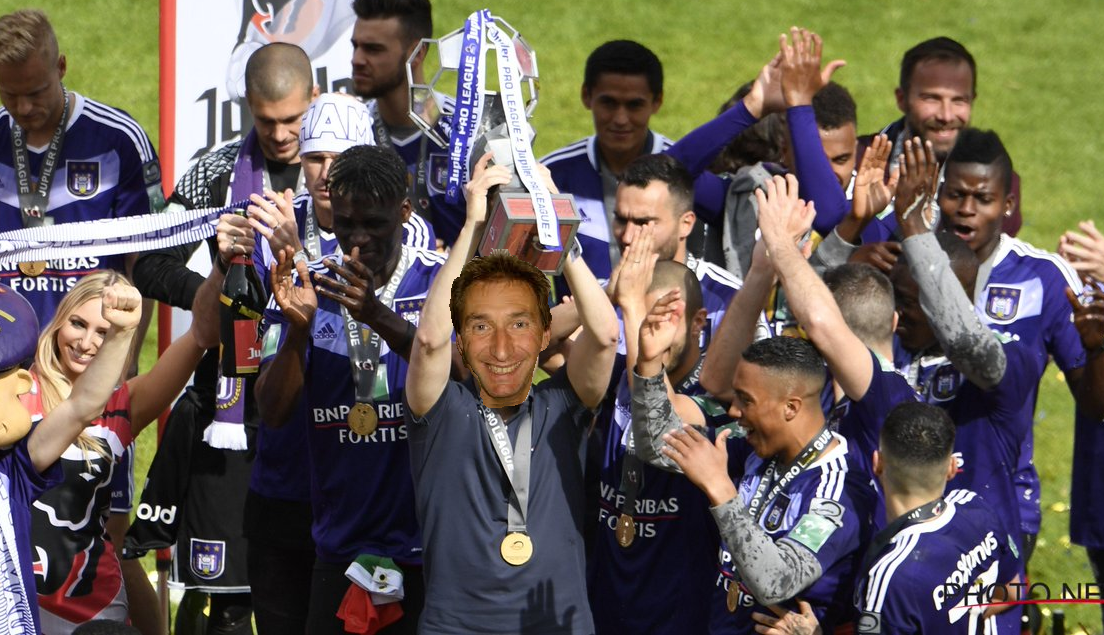 What a day in Brugge, after a very steady and good looking season, from matchday 5th till 34th on the lead, they will hate the play-offs now for sure, ended with a 8pt. lead who was halved in the Play-Off 1. A lot of discussion will come in the next months and years to stop the halving of the points. Anderlecht won a deserving final game with 1 - 5.

After Dost missed his penalty early in the game, the confidince was gone for Club Brugge. Anderlecht continued with their dominant system and it was youngster Aït El Hadj who scored the opener. As always expected Anderlecht started in the second half, where they score more than 69% (!) of their goals. Nmecha and 2x Fashion Sakala made the end for Club Brugge.

With the critical finances of Anderlecht this title (with direct CL Groups, 15 million) this title comes on time. Curious to see they're planning with their youngsters who started from the youth, 5 players out of 11 were this season from homegrown talent.

Tango: Did it in a way that wasn't really healthy for my heart to be honest.
TheLFCFan: Van Crombrugge is really an important player for every club in the world I think, at top clubs he would be a good 2nd GK and he never complains, great reflexes and always a steady form
Justice: Thanks a lot mate, I'll get the results in 2 weeks, let's hope for the best!
Login to Quote