I wanted to pick some club that was sometimes in the past well-known, and as far as I know, Boavista was once a good team, playing Champions League.. winning the league in front of Porto, Benfica, Sporting, Braga?

Things are different now, they have a lot of foreigners in the squad, a few Portuguese players.. and I wanted to change that. I want to bring some Portuguese players, as much as possible, and to bring also some good foreigners to make a team for the Champions League and to win the league. I love to bring always players within the same country as the club is. Here is my story with Boavista F.C., with just a 600k budget and a lot of weak players in the squad.

To make the story short, I'll tell you that I have sold few players, the best transfer was selling one Brazilian for 2.1m, and that was the amount I needed to bring few good players in order to try to win the league first season.

And these players were in the squad already:

Look at this players Alberth Elis, he had a value of 1-2m in the beginning, but after 1 season he is now 17m!! Read more below to find why...

And what I did with this team, fighting against big teams like Benfica, Porto, Sporting..

Yes, it was that close to winning the league but unlucky I was in the finish! Anyway, I'm so proud of my team, looking forward trying to win the league next season and try to do something in the CL. I know it is hard, because this team is not something with the attributes... there's one killer and he is Alberth Elis, he actually scored nearly 50 goals! He was named EU Golden Boot and more awards.. can't believe that he was capable to achieve any of the awards because his attributes are not so fantastic.

Aside from new coaches, physios, fitness coaches... I bought these players (loan/transfer):

..and signed a new contract with the existing player, Hamache:

I think this is it, with this team I'll try to win the league and do something in the Champions League. It will be hard I know, but let's see. I don't have any penny in the budget, and happy to have Portuguese players in the squad. 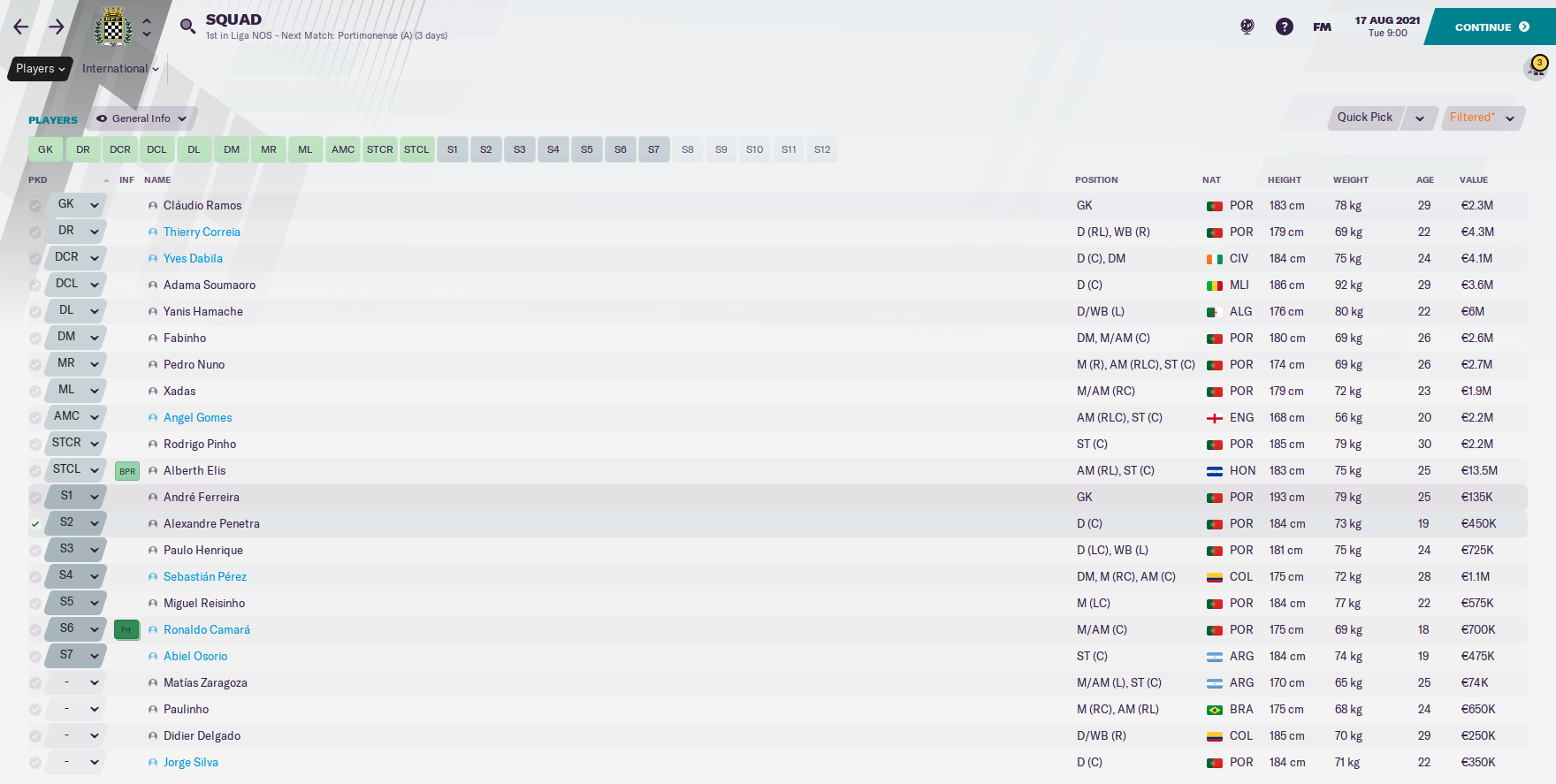 veljkho
3 months
Sharing update from finished 2nd season, again 2nd place in the league, which is great. But I'm looking for the title, more than anything! This season I had a chance to go out of the groups and I was unlucky. This is the group standing:

And here are the results:

I'm very happy of course.. but was unlucky because in the last match against Man Utd I had 2-2 until 90' min.

So, again 2nd place in the league. 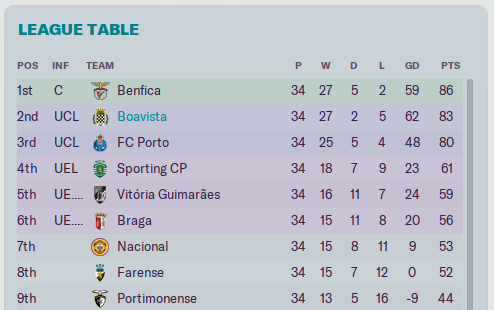 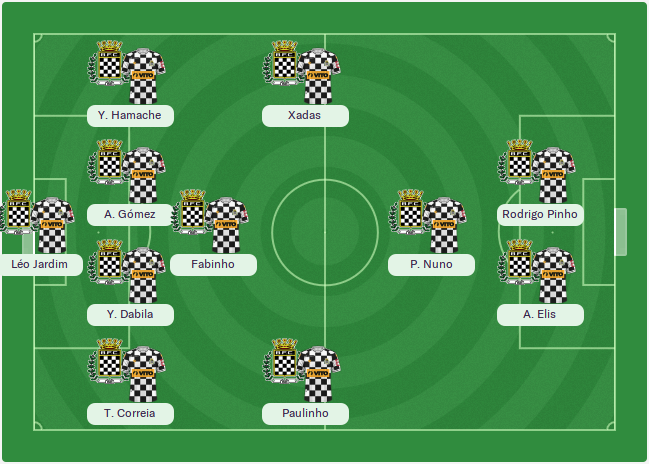 In the new season I'll be bringing some same players on loan again, like T. Correia, R. Camara, Angel Gomes... I was unlucky to not sign free contract with Ronaldo Camara, wonderkid. But he will be here on loan at least, along with:

So, yes I still want to bring mostly PORTUGUESE PLAYERS.. but, sometimes Im forced to bring others :)))

And, here are some buys... this is the highest paid player, Portuguese with dual citizenship:

I have installments and etc... long story. Will be paying for transfers in the next 3 years.. oh my God. Its hard to deal with finances still even if regular CL team. But that's a life, playing because its funny!

Very happy because of this goalkeeper above and also Xadas which is going to be captain for the next season because of his importance to the team!

veljkho
3 months
I'm now in the second half of the 3rd season. Played again CL and again 3rd place, which leads to Europa League.... which is nice but, you know... nothing interesting with EL.

This is the group stage results:

And this is my current squad, and I think I have great chance to win the LEAGUE! For the first time! 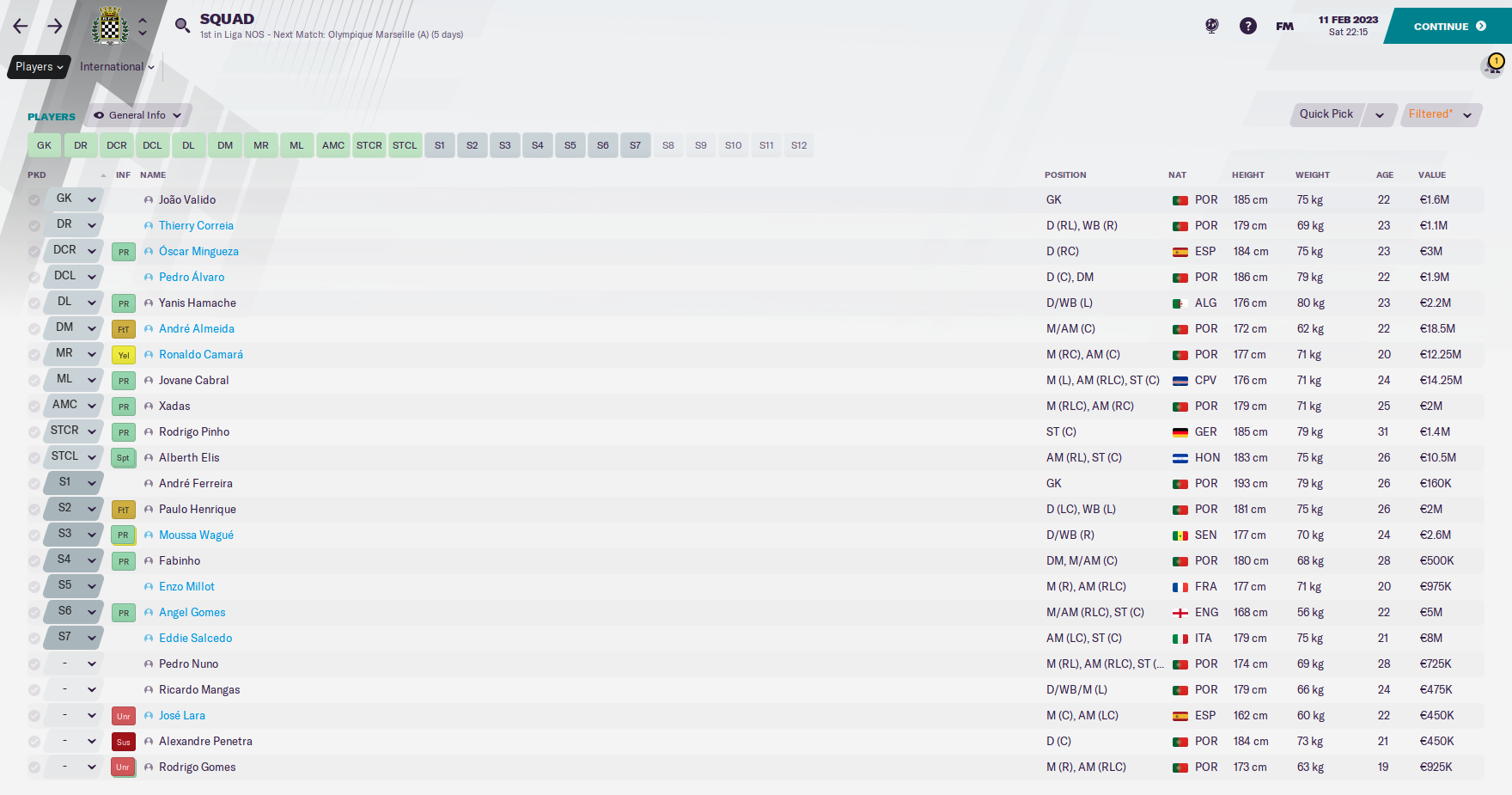 As you can see, mostly Portuguese players and I'm happy because of it. No big buys. Just to clarify those foreign flags:

There are 6 foreign players, but 4 loaned and will look to not extend their contracts. I have 2 foreign players in the squad, will also look to sell them.

Looking forward to winning the league if possible, which is no1 goal.
Login to Quote

veljkho
3 months
Third season has ended! Here are the news!!

Boavista FC is among the best clubs in EU in my save. Here are the screenshots of the game:

This is the league-standing, superb season!

Some of the new arrivals, the goalkeeper was bought for just 250k!!! He scored the last penalty in a shoutout against Salzburg in EL finals!

More pictures about winning the league:

Some awards from this season:

This is what happened in the Europa League finals:

Very dramatic penalty series.. at the end goalkeeper scored for the win! But also dramatic match at all, Rodrigo Pinho played injured and I sent him to a specialist for any equipment to bring while play.

These are some of them, my favorites:

THE GOALKEEPER - BOUGHT FOR 250K

EXTENDED LOANS (because I can't buy them)

These are new arrivals so far... will look to bring a few more, preferably Portuguese. I have now finally a big budget... 15M, but as you can see I still do not spend huge money. WIll look to invest in training facilities and improve those players to their full potential.
Login to Quote

veljkho
3 months
More changes in the squad... for the upcoming 4th season.. here are new arrivals:

TRANSFER 4M - He was unhappy at Sporting, so bought him for small fee. I think he will be amazing for the team.

In the meantime, won Supercup against Real Madrid.

So far only 2 foreign starters...
Login to Quote

veljkho
3 months • Edited
This is the half-season standing... Boavista dominating the league and even CL. Finally the team I can trust and play without pressure. Not afraid of any opponent.

Absolute domination in the 4th season.

The problem is his price, it's about 13M release-clause fee and also Inter FC who is interested also.
I mean, I have money now, because I haven't spent much on players... but that won't be the thing I wanted with Boavista... The goal is to always bring players for small fees, so I'll try to buy him for free at the end of the contract.

In the meantime I upgraded training facilities, looking to spend money improving facilities rather than buying complete players. There are young talented players in the squad already.

Looking forward 2nd half of the 4th season.
Login to Quote

veljkho
3 months • Edited
New arrivals in January, still in the 4th season, really dominating Portuguese league... will play against Juventus in the CL first knockout round.

TRANSFER 2.8M
Very happy to announce that I bought this (like a wonderkid). He will play together with Resende next season, both Portuguese.

Will try to make a transfer for Joao Resende, he is perfect striker this season.. but Benfica for sure don't want to sell him.
Maybe I'll try to sell someone and get the money.. but that would be a big transfer like 30M.

Best XI and team of the year. 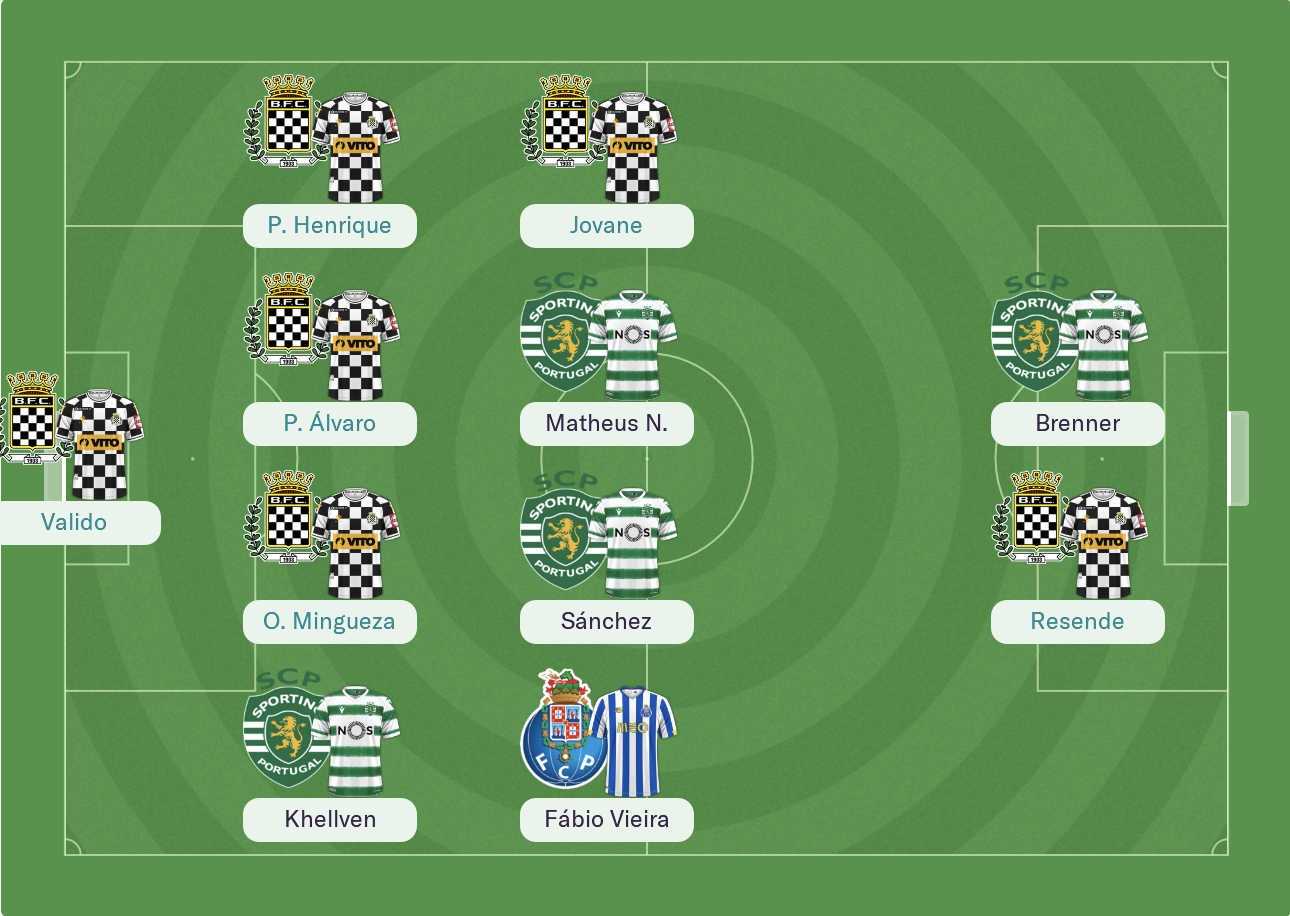 I've got an offer from Shandoang about Jovane Cabral... and I accepted... but he rejected to sign a contract with them.

New arrivals are here... I bought Almeida on a free transfer, he is a backup.

Finally I bought Marcos Paulo... didn't want to wait for his contract to end, who knows what giants would want him them.

This is the biggest transfer-in so far. Looking forward to bring one more youngster and will share new pics soon.

And as you've may seen I changed the skin... I have header back in colors! There are also background images of stadiums.
Login to Quote 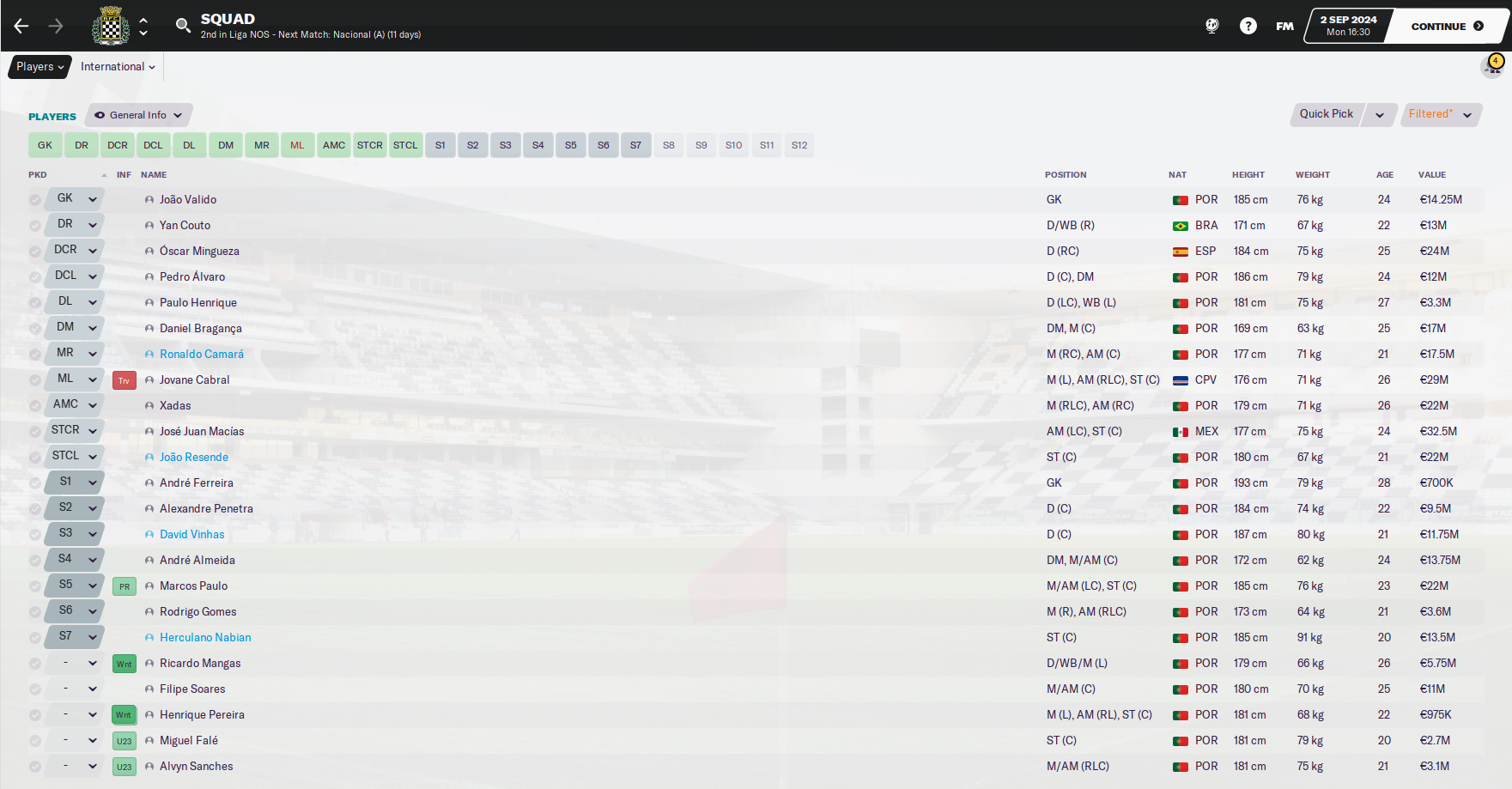 JoaoLopes1531
1 week
Greetings! Amazing job and transfers you have managed to make!
If I may ask, what skin are you using?