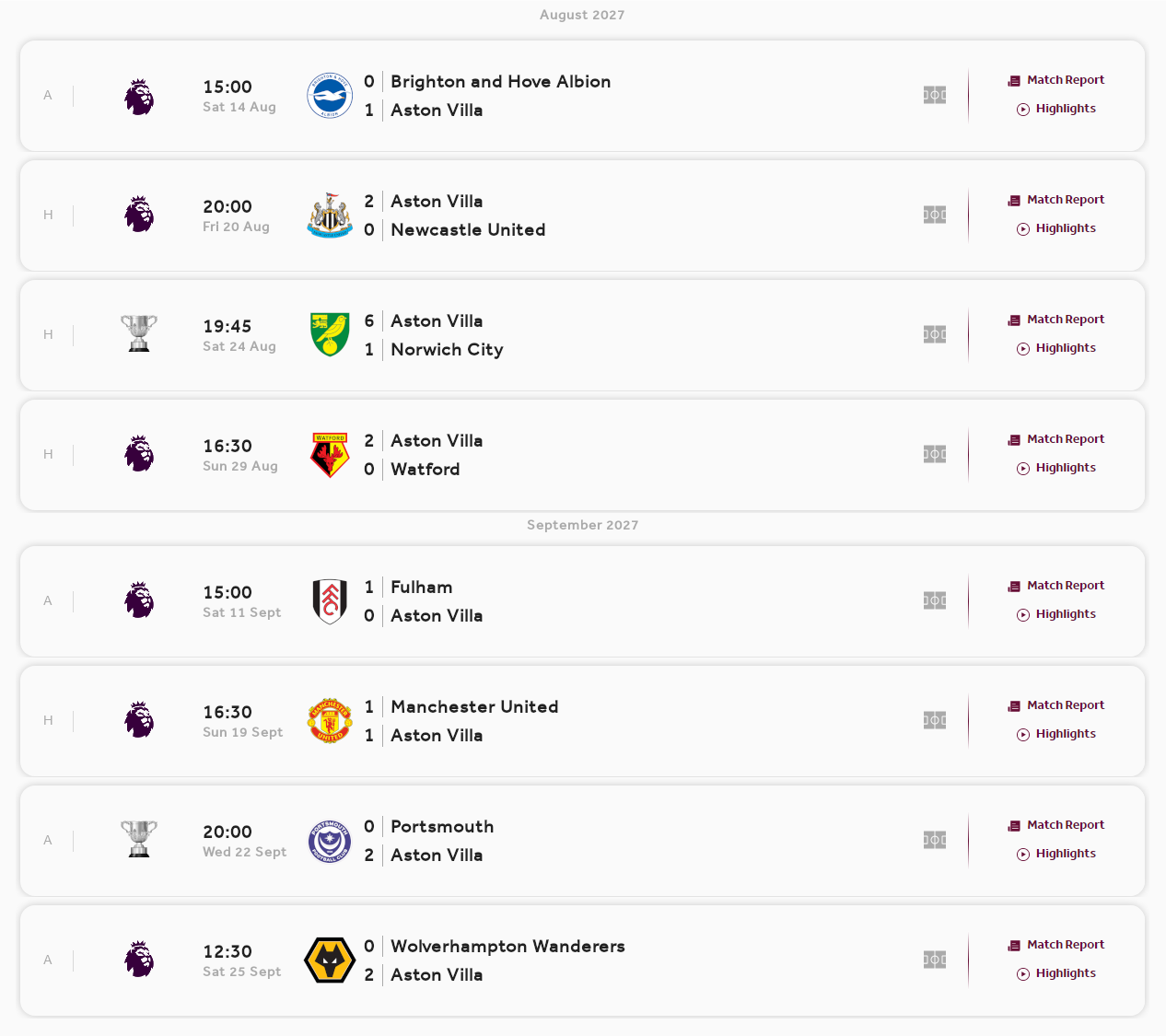 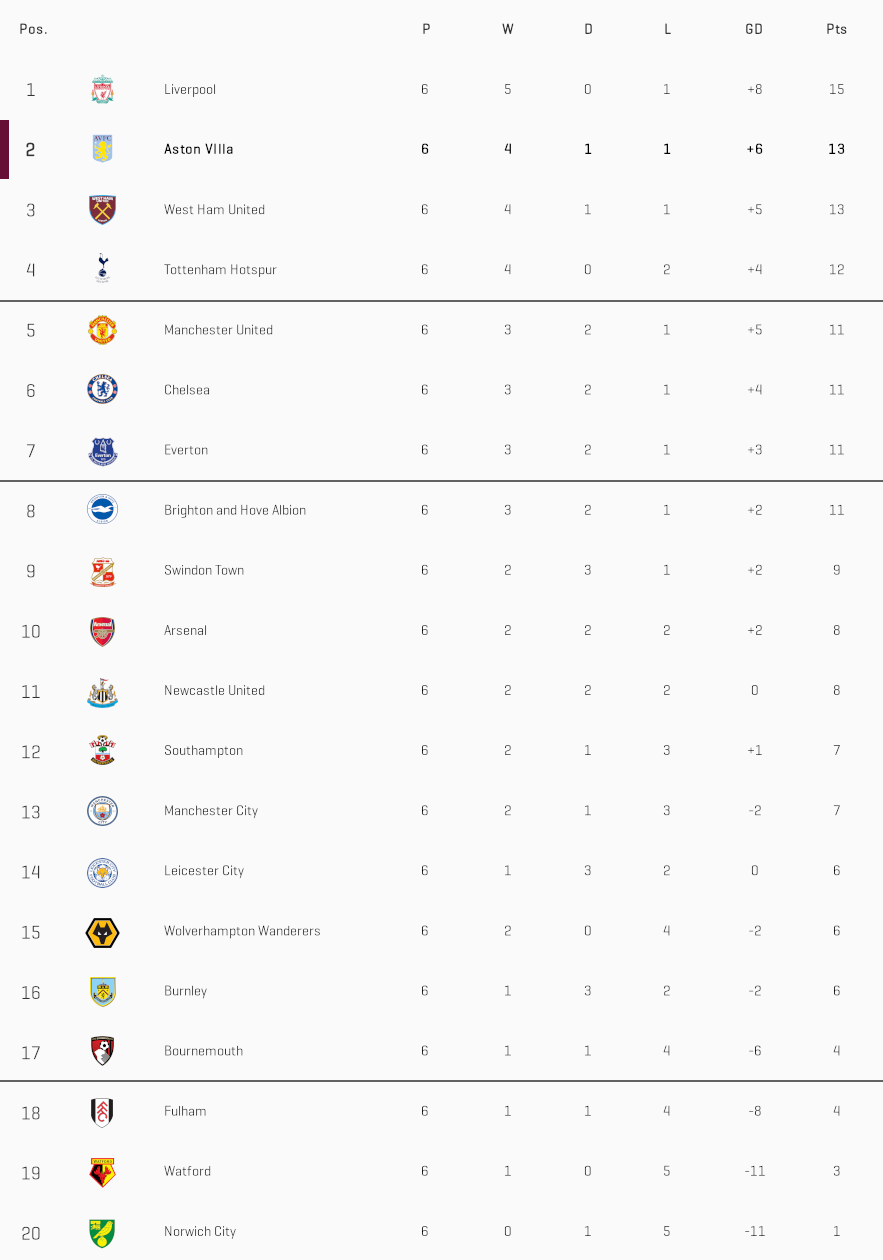 Justice: It feels like we've made all of the right changes, a particular highlight being the defensive performances from us! It's early days but keeping 5 clean sheets out of 8 games is very promising.
Login to Quote

Justice
6 months
Now that’s more like it. The spread of goal scoring is promising and shows you’ve now got a good amount of quality going forward. Defensively it’s looking good too, so we should be set for an exciting season for Prince William Mountbatten Windsor’s favourite club.
Login to Quote 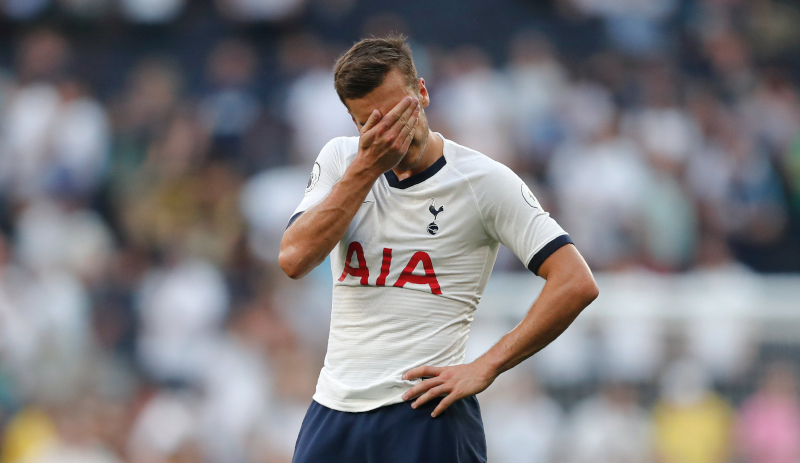 Aston Villa have overtaken Liverpool at the top of the Premier League table with a 2-0 away victory over Tottenham Hotspur.

The win makes it nine games unbeaten in all competitions for Neil Godwin as his side continued their captivating start to the season with 11 games gone.

At the tea-time kick-off, both sides started off slowly in the first-half with a lack of action from both attacks.

However, Maurits Kjærgaard bagged his side’s first goal just two minutes after the second half whistle. With Sucic laying it back to his midfield partner André Ratzsch, the German found Kjærgaard’s run with perfect timing as the winger blasted it across Musso’s goal into the bottom-left corner to make it 1-0.

Just ten minutes later, a Jack Harrison corner was whipped in to meet Ratzsch’s head to make it 2-0 to Villa, with the German finishing the game with one goal and one assist.

The win pushes Godwin’s side two points ahead of now 2nd placed Liverpool, with the Reds playing their game in hand with their first Merseyside Derby of the season tomorrow at Anfield. On 26 points, Villa are 6 points ahead of Arsenal, Newcastle and West Ham, with the latter missing the opportunity to catch up after drawing 1-1 with Leicester City.

Aston Villa’s next fixture will be Jürgen Klopp’s side with the Premier League holders travelling to Villa Park in two weeks’ time. Justice: We seem to be absolutely flying, it's been an incredible start for us and one that I didn't foresee in preseason!
Login to Quote

Tayls
6 months
Absolutely loved reading this up to this point. It has been a real journey, initially starting at Swindon and now here at Villa. A really good start to the season here.
Login to Quote

J_ames
5 months
What a start to the season for Villa, it certainly seems that you've gotten the squad balance right. Gone are the players that weren't pulling their weight, and you've brought in players that are genuine difference makers. It's a long season, but the early signs are very promising!
Login to Quote

You are reading "Neil Godwin: The Next Episode".