#39322 Fairley123 : This has been such an interesting read, do you think ravel will ever become a consistent first team player for you? Or do you think he will always remain a fringe player?


I don't know to be honest. He will spend next season on loan so I will see how he develops then.
Login to Quote

#39353 Ory1997 : What happened to Ronney? Btw could you show me the development of these guys in the attributes page: Fabio, Rafael, Chris Smalling, Phil Jones, Javier Hernandez, Eden Hazard and Progba. I always have serious problems developing Fabio and Rafael in my game and always eventually sell them, Progba never develops even if I play him a lot, 15(10) games per season for him. Jones and Chris Smalling seem to stop developing in my games at around 22-24 just before thier stats develop into world class. As for Hernandez and Hazard I'm just curious.

Rooney had one injury that ruled him out for 6 weeks then in December he broke is leg and missed the rest of the season.

I will get these screen shots as requested soon.
Login to Quote

#39353 Ory1997 : What happened to Ronney? Btw could you show me the development of these guys in the attributes page: Fabio, Rafael, Chris Smalling, Phil Jones, Javier Hernandez, Eden Hazard and Progba. I always have serious problems developing Fabio and Rafael in my game and always eventually sell them, Progba never develops even if I play him a lot, 15(10) games per season for him. Jones and Chris Smalling seem to stop developing in my games at around 22-24 just before thier stats develop into world class. As for Hernandez and Hazard I'm just curious. 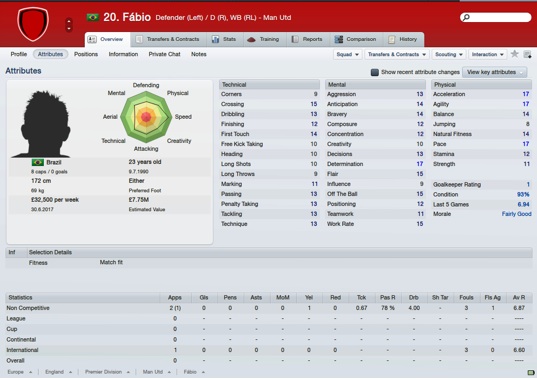 I have been given a fund of 63 million to spend on new players however on looking at my squad I don’t think that I need to invest much if all as this team just won the Champions League and lost out on the League on only on point.

My goalkeeping department is strong as I have David De Gea, Anders Lindegaard and Sam Johnstone. I am monitoring Marc-André ter Stegen at Borussia Mönchengladbach and will see how he develops.

At right back I am strong as I have five players who could play in that position. They are Kyle Walker, Rafael, Fábio, Chris Smalling and Phil Jones.

At left back I have Jordi Alba and Fábio plus Jonny Evans could play there. I also have a player in my Academy called Kristian Davies.

At centre back I have Chris Smalling, Phil Jones, Jonny Evans, and Nemanja Vidić. Plus I have a couple of youngsters who played well last year in Luke McCullough and Sean McGinty. I have put Scott Wotton up for sale as he did OK in the games he played in but he has not developed well. I also have two Academy players called Shaheen Hughes and Andrew Kenyon who could slot in.

In the centre midfield category I have Anderson, Paul Pogba, Tom Cleverley, Darren Fletcher and Oliver Norwood. With the formation I play I only use two or sometimes three CM. At the moment I am happy on how they are playing especially Pogba and Cleverley. Anderson and Fletcher never moan about lack of playing time and are very versatile and can play in a number of roles. Also I am looking to play Norwood this year as he has the potential to be a good playmaker. Also Mats Moller Daehli is developing nicely. However one area that I am lacking is a defensive midfielder and therefore I am looking at Jack Rodwell or Javi Martínez.

With regards to attacking midfielders since I brought Mario Götze, Eden Hazard and Mateo Kovacic last year I do not need any more creative players. I also have the likes of Nani, Ashley Young, Gerard Deulofeo, Alvaro Vadillo, Adnan Januzaj and Robert Brady out wide. Not to mention and Ra'vel Morrison who can play anywhere across the front line. However I may look to loan Morrison so he can get some match experience.

I will not be looking for any forwards as I have plenty. Javier Hernández was sensational this season and when Rooney returns from injury it will be like having a new striker. Also I have Federico Macheda returning from his loan spell but I may look to loan out Carlos Fierro and Will Keane so they can get some league experience. However I am still monitoring Iker Muniain.

I have also created affiliation with Hull FC with will allow me to send players on loan. Just like Macheda did last year I will look to be loaning Celtic Fierro as they just sold their main striker Hooper. Also I will be looking to loan Will Keane, Gerard Deulofeo, Mateo Kovacic, Alvaro Vadillo, Adnan Januzaj and Ra'vel Morrison so they can get good first hand experience. Ideally all would be 6-month loan deals so they could all return ready for the second half of the season.

I have also put Bebe (not in my 1st team thoughts), Tyler Blackett and Ryan Tunnicliffe and Michael Keane (not developing well) up for sale.

I will not be buying players for the sake of it and I will not spend silly money. However Luka Modrić has indicated that he wants to leave Tottenham and Man City are interested. So I will see how this develops.
Login to Quote

Godman
9 years
Transfer News – I have released Tyler Blackett from his contract.
Login to Quote

Godman
9 years
Transfer News – Ravel Morrison has joined Cardiff on loan. Normally I only let my players go on loan if they are guaranteed to be key players but Cardiff have said that he will be a squad member. I believe that in Morrison’s case this will be good because he will have to fight his way to get into the Cardiff staring line up.
Login to Quote

Godman
9 years
Transfer News – Alvaro Vadillo has joined Hull on loan. Vadillo wanted first team football so a season in the Championship with Hull will be good for him. Plus Hull have good training facilities so this should help his development.
Login to Quote

Godman
9 years
Transfer News – Celtic Fierro has joined Celtic on loan for the season. I am hoping that he will get a lot of games due to them selling their main striker.
Login to Quote

Godman
9 years
Transfer News – Will Keane has joined Charlton on loan. Charlton have said that he will be a key player so hopefully he will play lots of games and score lots of goals.
Login to Quote

Godman
9 years
Transfer News – Released Bebe from his contract. He had loan spells away and did not impress. He is now free to find a new club.
Login to Quote