Right, so who really gets Chelsea, Arsenal and Manchester United in 9 days??? To be honest, 4 points from those matches is, in my opinion, good. Lallana is having a storming season. I am currently sitting 6th in the league with 37 points and a goal difference of +14 at the half way point of the season.

In the FA Cup 3rd Round, I have been drawn away to Burnley, so I am fancying my chances there. Something I am worried about is my strike force because Demba Ba and Papiss Cisse are both highly likely to leave me for the African Nations Cup, which would leave me with Naismith or Best as my striker, and I don't fancy that. I am toying with the idea of bringing in Nelson Oliveira from Benfica as he has been offered to me. I am thinking a loan with an option to buy will be good for me.

We are half way through the season, so let's look at the tables and such...

but i am interested in Kirchhoff and Bell from Mainz, two young centre halves who look like they could be good.
Login to Quote

shaneo insaneo
9 years
Paying in installments is not good for your finances . As it puts your club in debt
1
Login to Quote

It seems that, whatever I do, I simply cannot score more goals!! I have changed formation from a 4-3-3 with wingers to a 4-4-2 with wingers, but it simply doesn't change anything. BUT, I am still in possession of the best defence in the Premier League, which is more than I expected at the start of the seaseon.

So far, I think I have been lukcy with injuries, and Davide Santon is the only player to be out for any sort of time this season, and he was out for 3 matches after getting injured against Everton this month.

The transfer window has just slammed shut, and Newcastle have done a bit of business...

I thought that Cisse and Ba would be heading to the African Cup of Nations, so I thought I better bring in some temporary back up for them while they were away, but it turns out they haven't qualified, so they are still here. So Oliveira will simply be a back up player for the rest of the season and it is unlikely that I will buy him permanently.

A bargain, Umtiti is going to turn into a megastar according to my coaches and scouts. He scored on debut against Burnley and I am likely to give him some chances in the league this season as well to ensure he progresses well. I have good youth coaches as well so he will hopefully fulfill his potential.

Tiote has gone to the African Cup, so I felt I needed a temporary defensive midfielder and Santos was on the loan list so I thought he was a worthwile signing for a few months till Tiote is back.

I have been scouting this kid for a long time, every match he has played in in fact, because I think he will be a star. Earlier in the season, he refused to even negotiate with me, but he was then offered to me for £2.5m and I simply could not say no! Obertan has been offloaded to free up a space in the squad for him and I intend on giving him game time this season.

Tottenham were involved in two of the biggest transfers of the January transfer window, with Villarreal's Giuseppe Rossi for £35m and, going out the White Hart Lane exit door, was Spurs' midfielder Luka Modric, who headed to Manchester City for £23.5m. City let Nigel de Jong leave the Premier League for Russian side Zenit for £9.75m. Leighton Baines also joined Spurs from Everton for £15.75m, making Spurs the side who spent the most money in the window. Sunderland brought in Blackburn's Canadian winger Junior Hoilett for £9m, and Stoke's tough defender Robert Huth headed for Serie A team Napoli.

Spanish teams seemed quiet this window, with one of the main transfers being the exit of Atletico Madrid's full back Filipe heading for Juventus in a multi million pound deal. Italian giants AC Milan bought in Oscar Cardozo from Benfica for in the region of £6m, and Udinese's valuable centre half Mehdi Benatia headed for Internazionale. In France, Sochaux's tall striker Modibo Maiga refused a deal with Newcastle and instead headed for their rival's Sunderland, and PSG brought in Markus Henriksen from Rosenborg.
Login to Quote


No doubt what the highlight of the month was as Newcastle won the League Cup for the first time in their history with a double from Papiss Cisse, who has finally refound his goalscoring touch after a prolific month for the Toon army. Coloccini has been in superb form for Newcastle as the masters of the 1 goal win rumble on towards the end of the season loitering in 5th, level on points with 4th place Chelsea who have a +3 goal difference better than Newcastle. Of course, victory in the League Cup has ensured qualification for the Europa League at the 3rd qualifying stage, but I at least want to get through to the tournament group stages, so finishing 5th would be super. Ideally, I would rather not qualify for the Champions League simply because we are nowhere near good enough to do anything of note in that competition yet, but that doesn't mean I will not try!!!

Feel free to comment guys, and I hope you find all this interesting.
Login to Quote

A pretty good month for the toon army, and Papiss has hit form right when it matters. Before the back to back losses against Stoke and Norwich, we had risen to the heady heights of 3rd in the table. To put that in perspective, Newcastle were ahead of the wealthy Chelsea, the much-fancied Arsenal. We would have qualified automatically for the Champions League. Not the Europa League, but the Champions League. We would have had to face the likes of Barcelona and Real Madrid: Newcastle would have been victims of their own success- although that would have brought in money for the club, so alas, it may have been a good place to finish. But hey ho, defeat to Stoke and Norwich put us back to 4th in the league, where, along with 5th, we have been sitting pretty for most of the season. After seeing that we had to face Man City and Liverpool, I feared that our best defensive record would have vanished- but we won both and conceded one!

Manchesters United and City are sitting at the top of the league, with Sunderland, QPR and Swansea in the bottom three.

Bring on April and May!!
Login to Quote

A very good month again as Newcastle press on for the 4th Champions League spot. I have already played one game in May, which will be in the next monthly report, and the table currently sees Manchester United top with 88, Manchester City in second on 87, Liverpool in third with 76 and Newcastle on 73 in fourth place, four points ahead of Chelsea. However, I have played one more match than most other teams in the league having played 37 to everyone else's 36. But I have guaranteed at least 5th place in the League, which was my aim at the start of the season. Next up is the FA Cup Final, against Aston Villa, who you may realise I also played in the League Cup Final: let's hope for the same result- I bet Villa are glad, as they are now guaranteed European Football next year through my success, as they are way down in 15th so would not have had a prayer otherwise!!
Login to Quote

NEWCASTLE WIN THE FA CUP AND QUALIFY FOR THE CL


A superb month for Newcastle which finishes off a superb season. The team were, as told by the board, to record a respectable league finish this season. They were expected to reach the 6th round of the FA Cup. They wanted the team to reach the League Cup Quarter Finals. But, back in July 2011, they did not realise they had appointed a man who would have the ability to guide the unfancied Newcastle to success in both domestic cup competitions, and, possibly the best of all, to qualify for the Champions League in 4th place. After sitting in 5th or 6th place for much of the season, Newcastle and, more importantly, Papiss Cisse found their scoring touch and, coupled with Chelsea's abysmal end to the season, managed to finish fourth with a superb final month of the season which involved a victory at Old Trafford, which was arguably not deserved: only 39% possession, 3 shots in the match, and one on target. BUT, that one on target was a 83rd minute penalty from Yohan Cabaye, which gave the team belief. As a reward for the superb success he brought to St James' Park (I know it is called the Sports Direct Arena, but that is stupid, so it is being called St James' Park), Smith has been rewarded with a new contract till the summer of 2017.

I will post an end of season review shortly guys, with info from the rest of the Prem and other leagues as well.
Login to Quote


Newcastle United have, simply put, had a brilliant season this year, winning both domestic cups and doing much better than expected in the League by finishing in 4th spot. So here is my review of my season...

Papiss scored two of his 28 Premier League goals in this superb performance from Newcastle as they record a well earned victory over the eventual title winners this season. While Newcastle recorded many good results throughout the year, this, in my opinion, was a stand out one.

Quite an easy one to choose as I simply looked at the player with the highest average rating throughout the Premier League matches this season. Santon won Young Player of the Month 3 times this season, so I suppose that one was not a shock. But M'Bengue didn't show up an awful lot in teams of the week etc so I was surprised to see he was my best player- but the stats don't lie!!!

This kid has been super this year. End of.

shaneo insaneo
9 years
being a newcastle supporter myself id liek to say well done. and its also good to see sunderland get relegated
1
Login to Quote

Right, so who really gets Chelsea, Arsenal and Manchester United in 9 days??? To be honest, 4 points from those matches is, in my opinion, good.

I know how you feel (The 4 games highlighted) 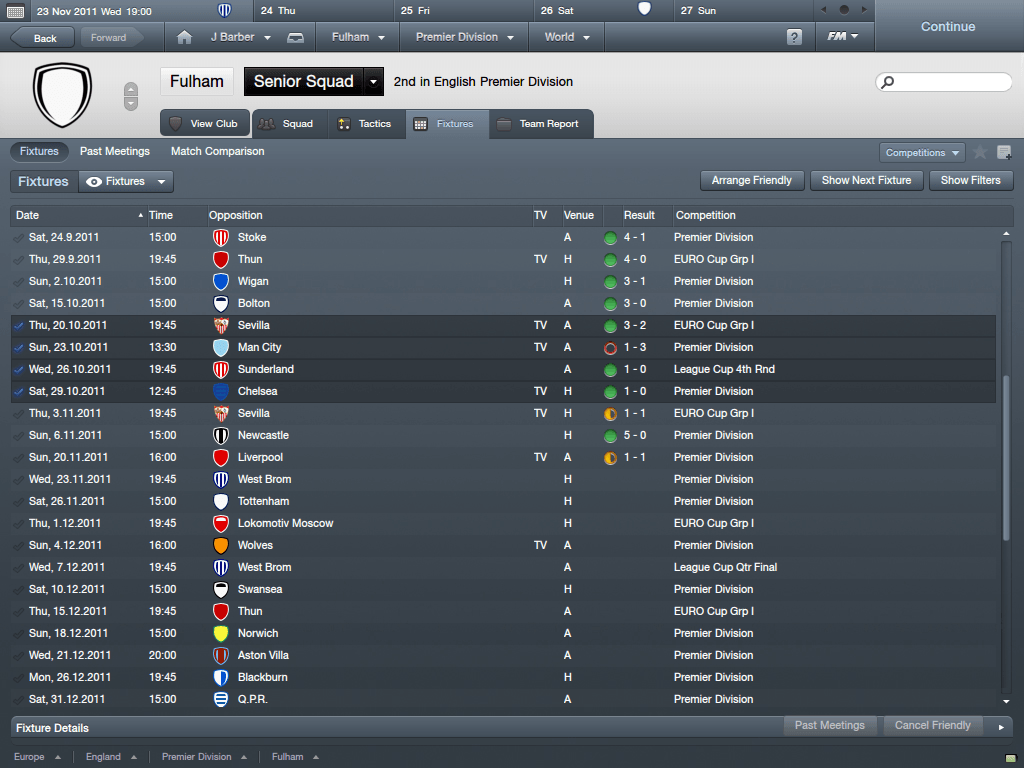 You are reading "FM12 Newcastle United Story- Bring back the Glory Days!".