Glenn T
10 years
With our Europa League First Qualifying Round against Cliftonville won, we will now face Lithuanian club Tauras in the Second Qualifying Round, but first we moved on to our first friendly against Bradford. 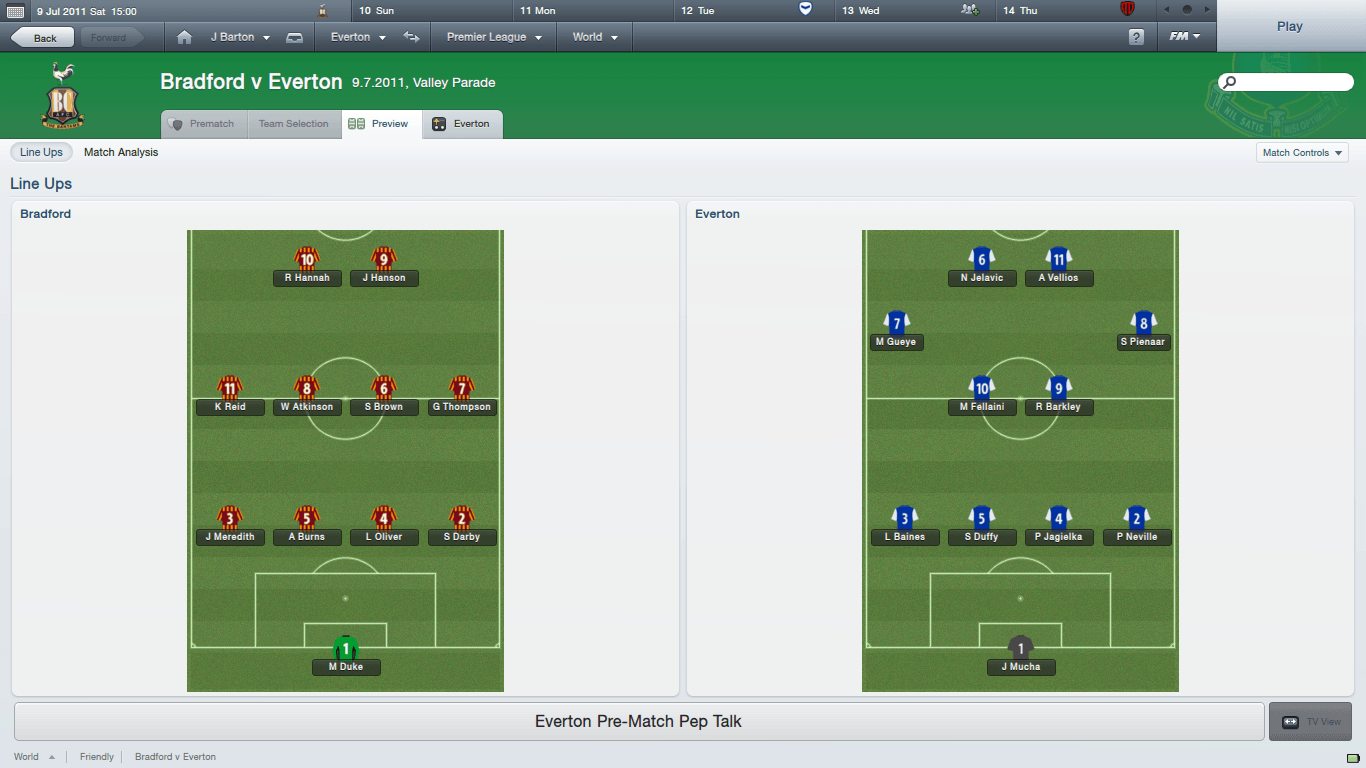 With Andy Burns and Luke Oliver of Bradford both scoring own goals, it was easy for Apostolos Vellios to complete a 0-4 win over the English minnows by slotting two into the back of the net, although Leighton Baines missed a not-so-crucial penalty.

Only five days into my managerial career, already two matches played, and won. This was an exciting time for both me and Everton and I couldn't wait to fast forward to the end of the season and see what position I would lead Everton to. Or maybe I would be sacked. Who knows? That's football. But I'm certain Bill said that he wanted to keep me here for the 'long-term' when he appointed me.

Emmanuel Adebayor had almost completed his move to Everton but his wage demands infuriated me. He was moving from the champions to a club competing in the Europa League, not another champion. But instead of lowering his 120k per week wages at Man City, the Togolese requested wages of 145k per week. Absurd! I refused to give in and after 30 minutes of talks I knew this wasn't going to get anywhere and told the player and his money-crazed agent to "get the fuck out of my office, you stinky twats".

One good thing though, is that we have almost completed our search for a left-back. There has been a breakthrough in contract talks with Celtic's Honduran defender Emilio Izaguirre, who had way smaller wage demands than Adeba-twat. He is expected to agree to the terms we offered him in a few days and we can then officially confirm his arrival to the expecting Everton fans.
Login to Quote 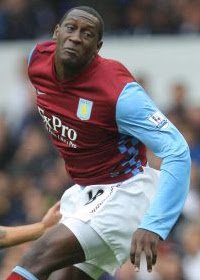 The former England international, now 33, is expected to provide back up to Nikica Jelavic, and will wear the No. 12 shirt for Everton. The striker, who could probably be described as 'infamous' because of his tendency to miss chances to score and his unimpressive goal tally, has signed a one-year contract at the Toffees and returns to Merseyside after 9 years, the tall striker having played across the Mersey for Liverpool between 1999 to 2004.
Login to Quote

Rex_Wrex_Wrecks
10 years
Why would you sign Emile Heskey instead of Michael Owen?
Login to Quote

Glenn T
10 years
Tony Hibbert has officially linked up with Wolverhampton Wanderers on loan and will play in the Championship for the rest of the season while Victor Anichebe has also moved on loan to Stoke, Everton have confirmed.

"We have Phil Neville at right-back," said Barton, in an interview with BBC Merseyside. "Seamus can play anywhere on the right but his natural position is still right-back and I feel he'll only produce the goods if we play him properly in his preferred position. I don't want three right-backs in my squad, so Tony had to go."

"What do you think of the Everton fans who are expressing their concern that two long-serving members of the club are being sold?"

"Well," Barton replied. "To take Everton to the next level is just what I intend to do, and I can't do that with players who aren't quality."

"Are you implying that Tony Hibbert and Victor Anichebe isn't quality, Mr. Barton?"

#64406 Gurdit : Why would you sign Emile Heskey instead of Michael Owen?

TheKopDiamond
10 years
Great start so far Glenn, il keep reading even though it is an everton story

#64428 TheKopDiamond : Great start so far Glenn, il keep reading even though it is an everton story

Glenn T
10 years
Everton have completed the signing of Celtic left back Emilio Izaguirre for a reported price of 4 million. The Honduran defender has signed a four-year contract, seeing him earn 25k per week at Goodison Park and will wear the No. 2 shirt, vacated by veteran Tony Hibbert who went on on loan to Wolves. 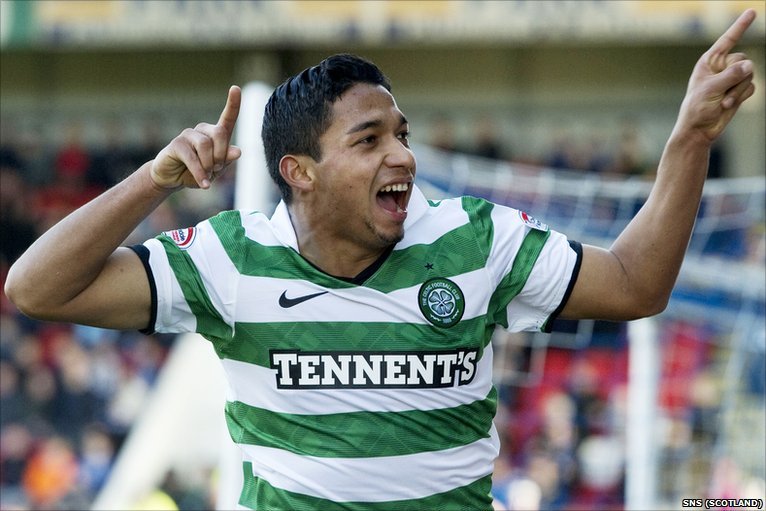 Chase for Leighton Baines hots up

BBC Sport understands that Manchester United has now joined in the chase for Everton's Leighton Baines.

The 26-year-old England international, who has 5 caps to his name, is in demand with Arsenal and Manchester United both in the frame for his signature. However, it is understood that Baines is in no hurry to leave Goodison Park as he is happy in Merseyside.

It is reported that Everton's Joey Barton would accept an offer of around 10 million for Baines.

The Liverpool Echo managed to get Everton manager Joey Barton to come down for an interview at Goodison Park earlier today.

The outspoken Everton manager, who only joined the Toffees a week ago in his first managerial position after being banned from professional football, said: "Leighton is not for sale. He is a quality player. I want to keep quality players if we are going to challenge for any honors.

"I have heard reports that I signed Emilio in case Leighton leaves... nonsense! If the papers are reporting it, it must be true, but no, it isn't. Emilio was signed to provide solid backup to Leighton, not replace him. If Arsenal or United come in with a high bid, or Leighton wants to leave, then that's fine. But at the moment that isn't the case, so Arsenal and United can both go away and let me prepare for the season."
Login to Quote

a_esbech
10 years
My word, your impersonation of Joey Barton is fantastic, no holds barred in dealing with the media. Great stuff.
Login to Quote

Glenn T
10 years
Emile Heskey has suffered a broken ankle and will be out for 2-3 months. This only increases my need for a striker as my only natural strikers now are Apostolos Vellios and Nikica Jelavic.
Login to Quote

Everton left-back and second vice-captain Leighton Baines has left Goodison Park and links up with Arsenal on a five-year deal and seeing his wages jump from 30k to 50k per week. Arsenal and Manchester United both reportedly offered the same - 2 million plus 8 million in installments, but Everton manager Joey Barton was said to be only interested in 10 million paid up front, something Arsenal did.

However, Baines insists that he did not leave Everton for the money.

"I never wanted to leave Everton," Baines declared, as he sat with new manager Arsene Wenger in the press conference announcing his arrival. "I already told the manager, 'I don't want to leave, but I will leave if you accept any offer'. My four years at Goodison Park were wonderful and I especially have to thank the fans, and my previous manager David, who made my experience there so enjoyable. Joey can become an accomplished manager and I am confident he will lead Everton to something big this year.

"It is an honor to be able to play for Arsenal. I can't wait to put on the jersey and I hope to bring this glorified club to further glory. I know we haven't won a trophy for very long now, but I really think I can achieve something big here.
Login to Quote

Everton and Joey Barton have announced the signing of Manchester United's youth keeper Sam Johnstone for a fee in the region of 500k, just an hour after confirming the departure of Leighton Baines. 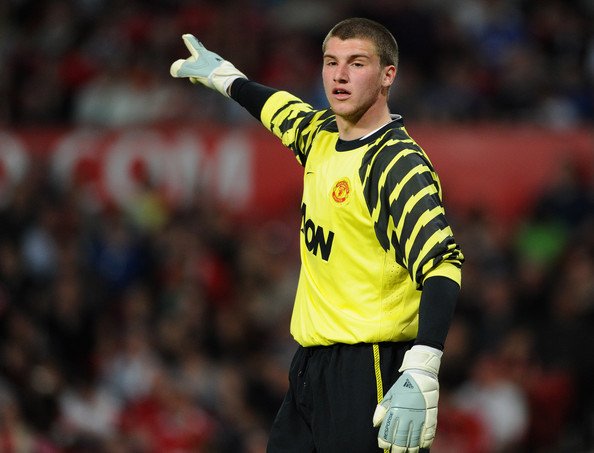 Johnstone, who was born in Preston, started his footballing career at Manchester United in 2009 but failed to make an appearance for the first team although he enjoyed success in the youth squads. He is expected to link up with Everton's Reserve squad and be third-choice behind Tim Howard and Jan Mucha.
Login to Quote