#64858 Walsall_Craig : Fantastic story this is one of my favourites to read


Good luck for the rest of the season and lets hope you fulfil your dream of getting them into the Champions League in your first ever season!!

Glenn T
7 years
Everton have lifted the Capital One Cup!

We are the first ever winners of the newly-branded Capital One Cup, last called the League Cup, with the last edition of it being won by our fierce rivals Liverpool.

It was a goal bonanza! 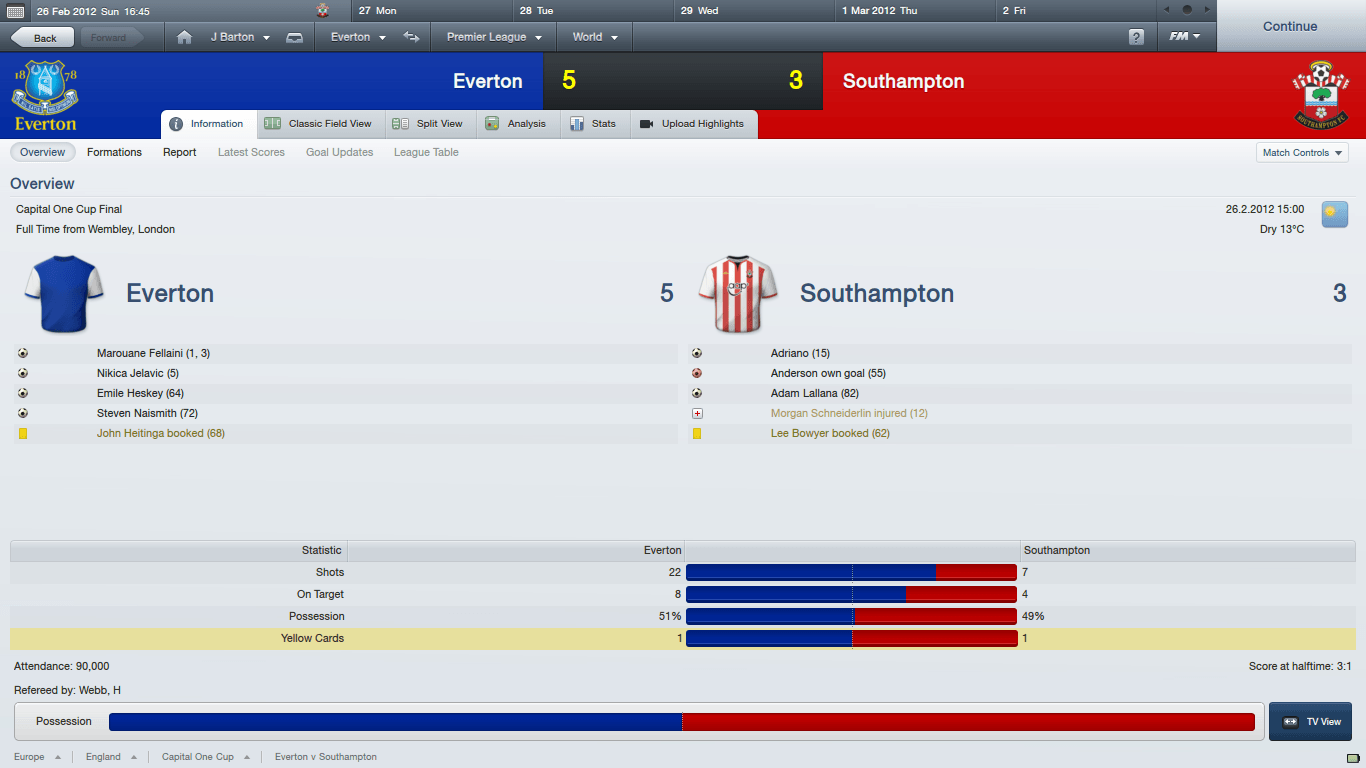 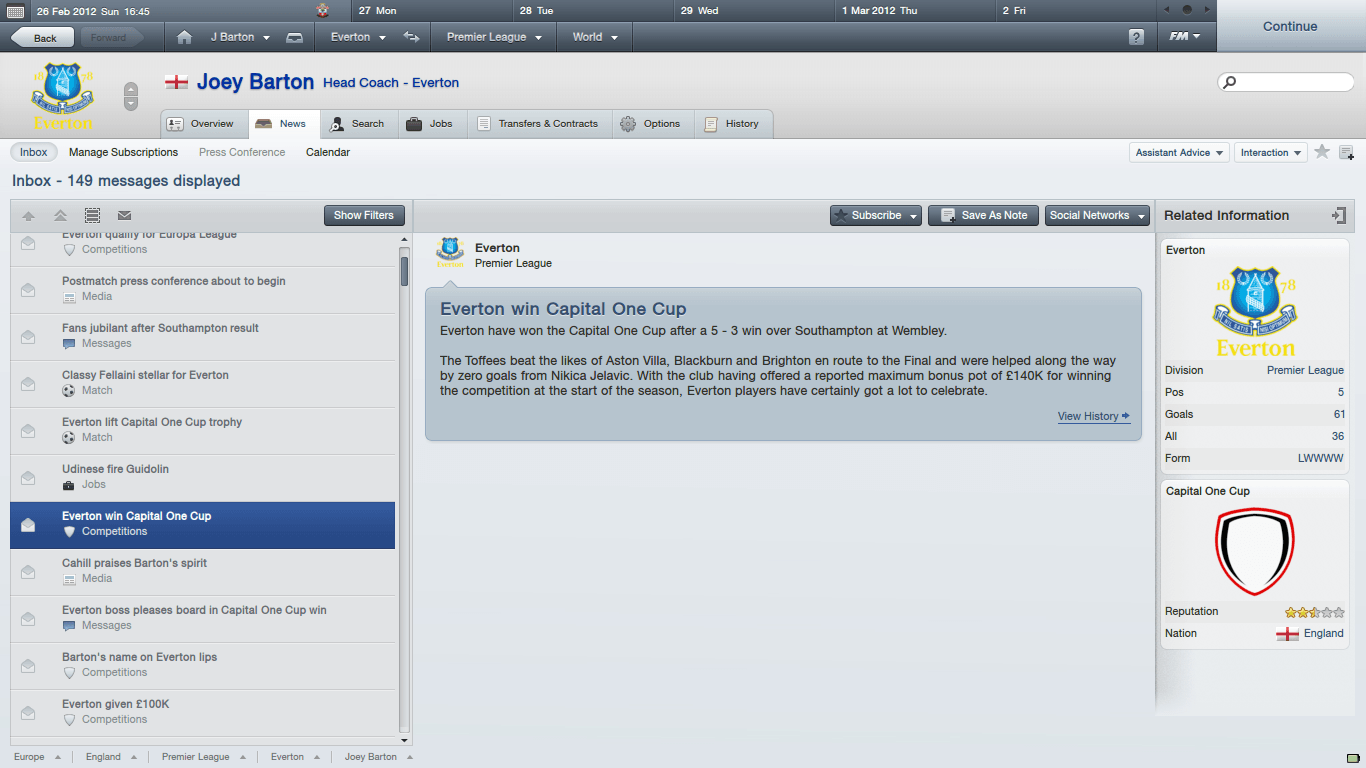 I believe I am now a firm Everton fan favorite, having delivered the club's first trophy since 1995.
Login to Quote 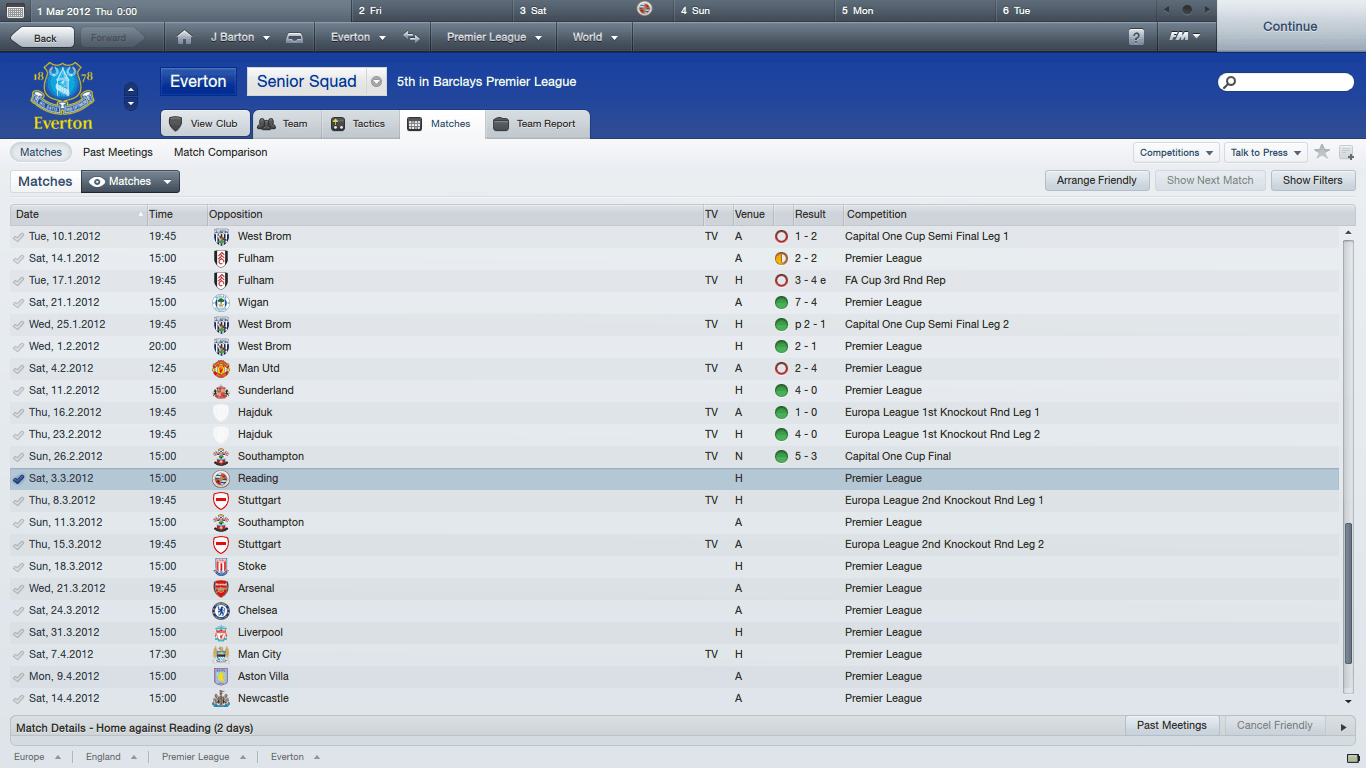 However we are dropping further down the league... 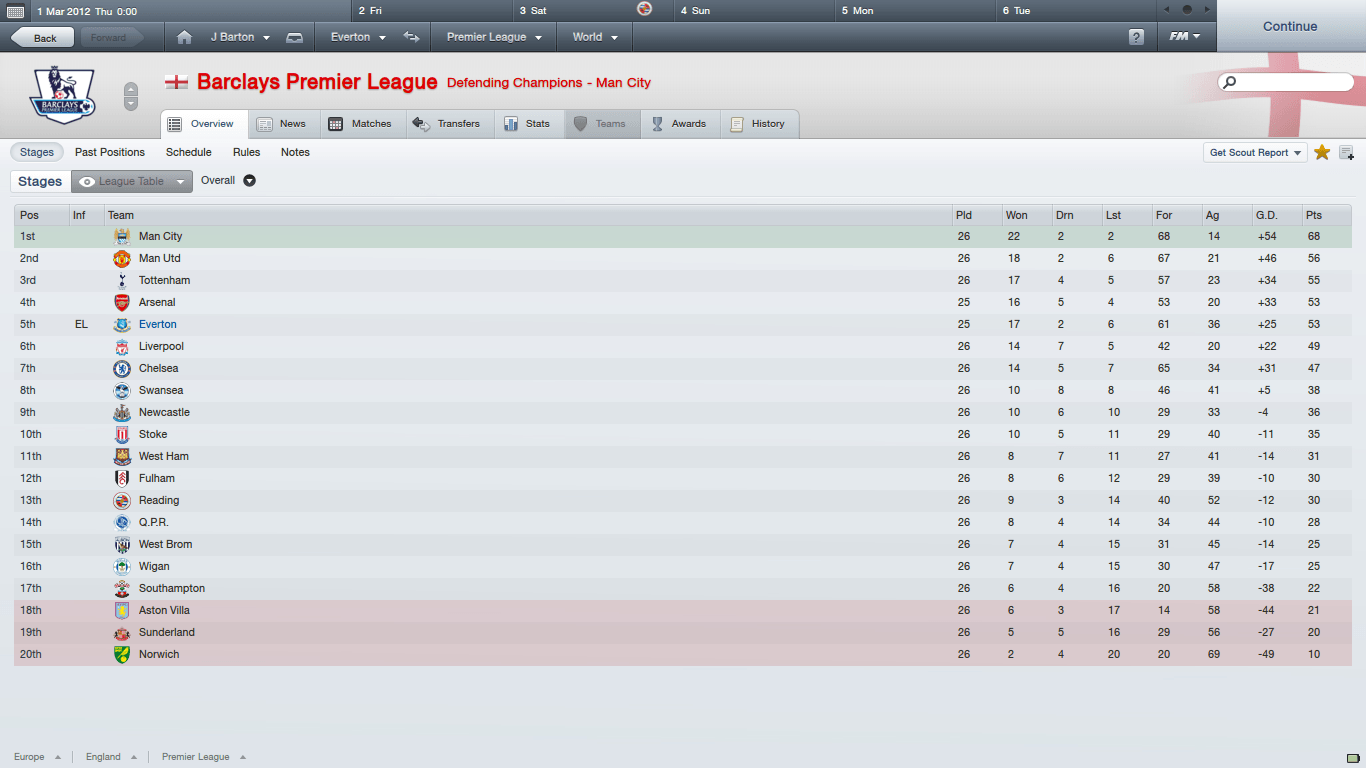 The highlight of this month is definitely, the winning of the Capital One Cup. I'm absolutely buzzing. To win a trophy in my first year as a manager is tremendous. I had never won a trophy before in my professional career, so this Capital One Cup, this trophy, was hopefully the first of many I would win with Everton.

We have also progressed in the Europa League, beating Croatian side Hajduk to advance past the First Knockout Round.

Keep Updating - I shall be reading Glenn!!

Keep Updating - I shall be reading Glenn!!

Thank you! It's comments like yours that help me keep the story going

Glenn T
7 years
March
On the back of a hectic month... I'm at 4th place, my Everton team having defying critics that we would slip up and drop down into mid-table, and vying for 3rd spot with the two North Londoners, Tottenham and Arsenal, with all three of us level on points but separated on goal difference. 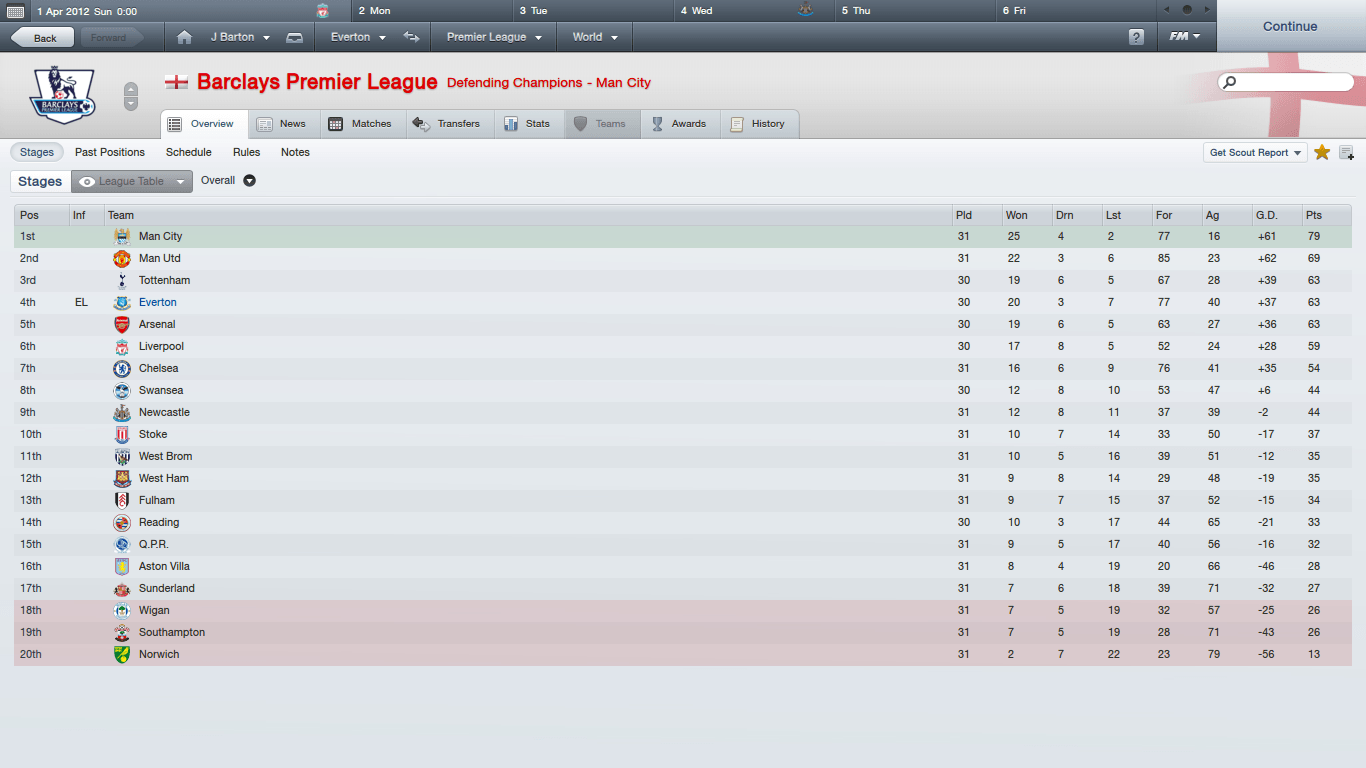 With my team clinching the Capital One Cup, we are guaranteed a place in the Europa League, but I have higher ambitions. We want the Champions' League!

Speaking of the Europa League, we were knocked out by Stuttgart with an aggregate score of 3-3, with them beating us on away goals, which is a disappointment, but although it is annoying to go out like that it gives us more 'room to breathe' as the only competition I am in now is the Premier League and the boys don't have to play so many matches in one month.

The Arsenal match was a disappointment but at least we won against Chelsea. Nikica really has an eye for goal at the moment and I will no doubt be looking toward him to help me secure a spot in the Champions' League.
Login to Quote

Glenn T
7 years
April
It was a very good month, the only tarnish being a devastating 5-0 loss against Tottenham, where after the match I told my players that they were all absolute shite and needed to buck the f**k up. 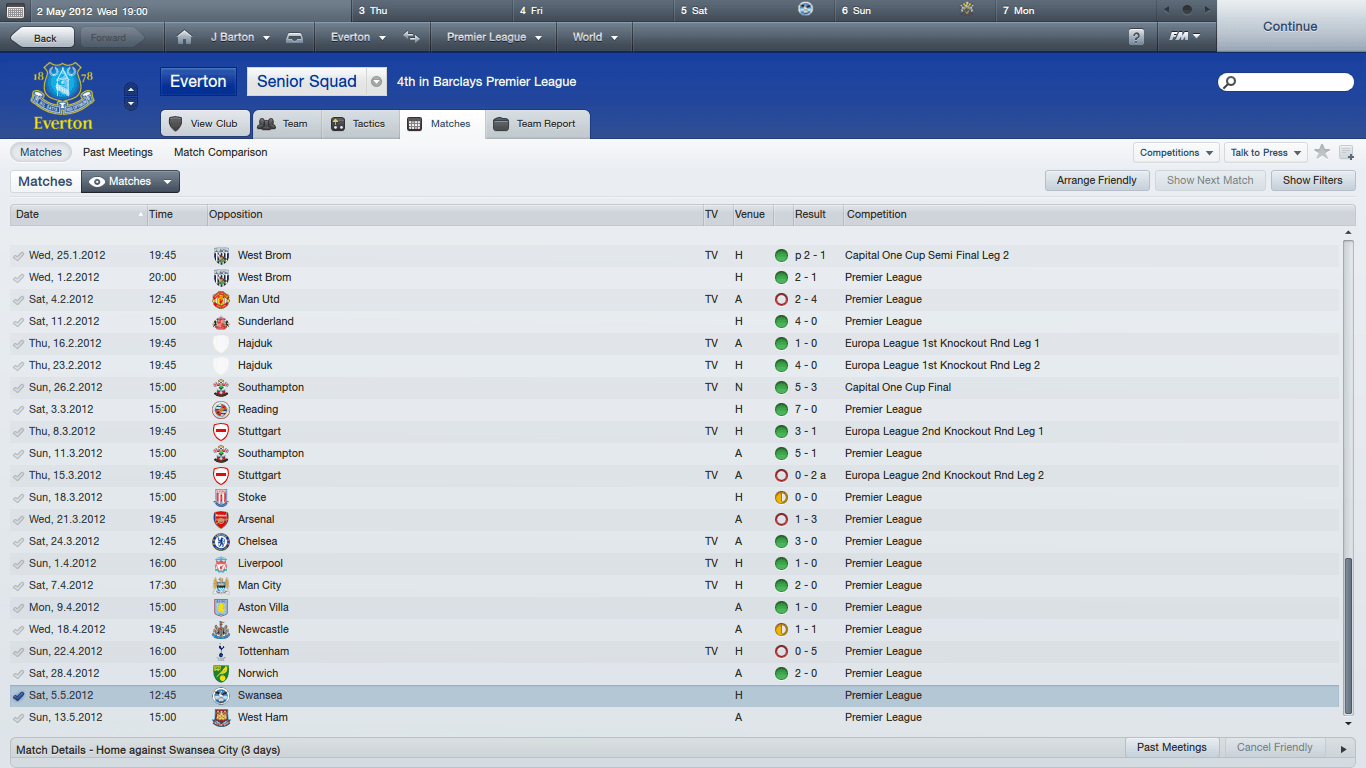 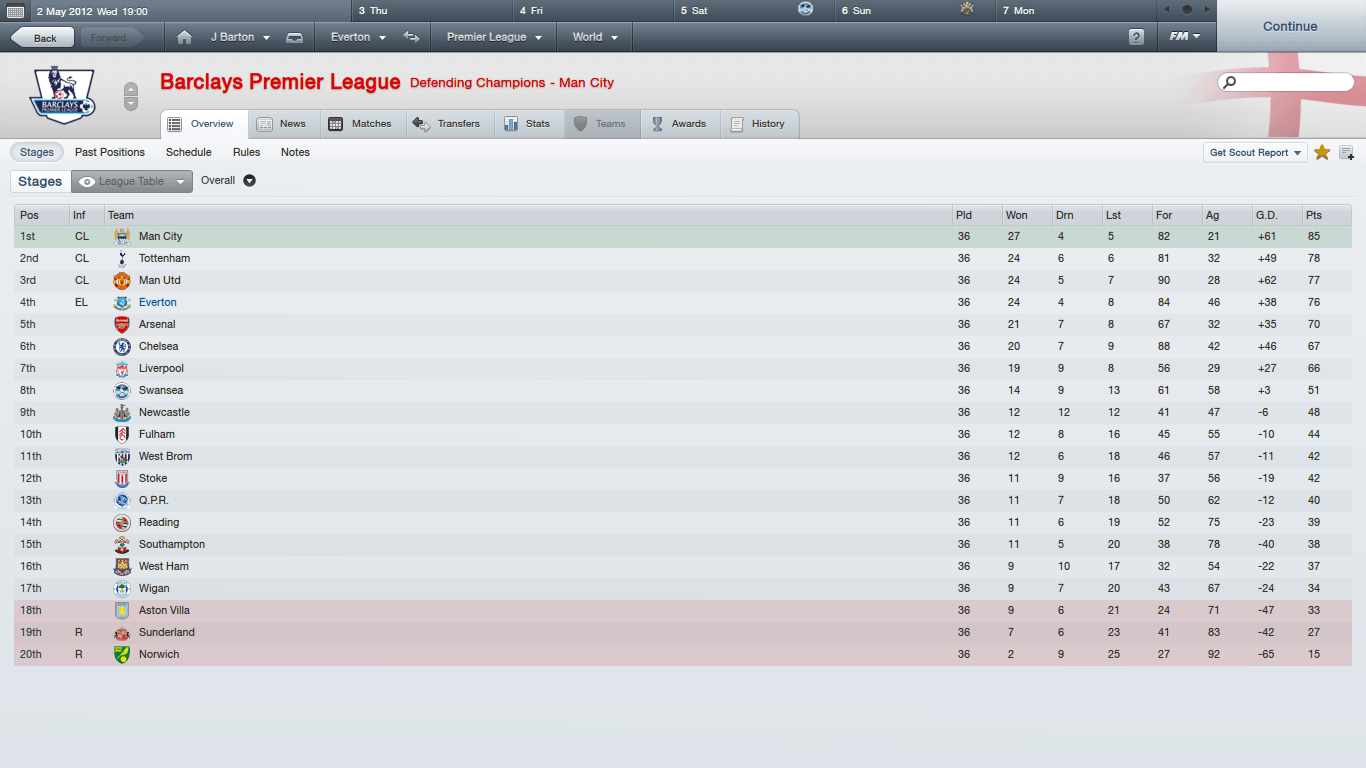 The 5-0 loss to Spurs was extremely disappointing but on a positive note we managed to beat Manchester City with some slick attacking movement. Speaking about Manchester City, it has been confirmed that they have retained their Premier League title, with two games in hand - now that is something. Can't say I dislike Manchester City although I'm not really on good terms with Roberto Mancini, so congratulations to them.

El-Hadji Diouf, Shane Duffy, and Sylvain Distin has all come complaining to my office about not getting enough playing time, which is shite because I had already told them before I would only be regarding them as backup players. Duffy has not been showing much potential anyway this season, while Diouf and Distin's contracts both expire in the summer so they will all probably leave.

Magaye Gueye returned early in February, surprising all the club physios who ruled him out until April at least. But Mag has not been the same since he got injured and his less than impressive performances since his comeback from the lengthy 5-month injury has seen him restricted to a place on the bench in most games, and now, after playing in a Reserves game he has went and injured his hip to effectively rule himself out until around the start of the new season.

We've just got two more games to play this season and the boys better not screw this up... We have to be relying on Man United now to mess up if we have any hope of landing 3rd place.
Login to Quote

Glenn T
7 years
I made my feelings clear to the lads after a 2-2 draw against Swansea in our second last match of the season, where Swansea scored an equalizer in the 91st minute.

"You guys grew complacent," I reprimanded them. "There goes two points, there goes 3rd place." I swung my gaze to Phil Jagielka, the backbone of the defense. "You need to work on your defending of set pieces, Phil. Your headers contributed to the attacking movement, but I saw some fucking terrible defending today. Work on that." I paused. "Anyway, we've qualified for the Champions' League. Be proud."

My words took some time to sink, but after five minutes, no single man in the dressing room were sad. No one knew it, but I had took notice of the table, yes, we only needed a single point to guarantee fourth place and Champions' League qualification, but we've got it, even if we threw away two points and effectively 3rd place. Next season would be our first Champions' League campaign in a long time. 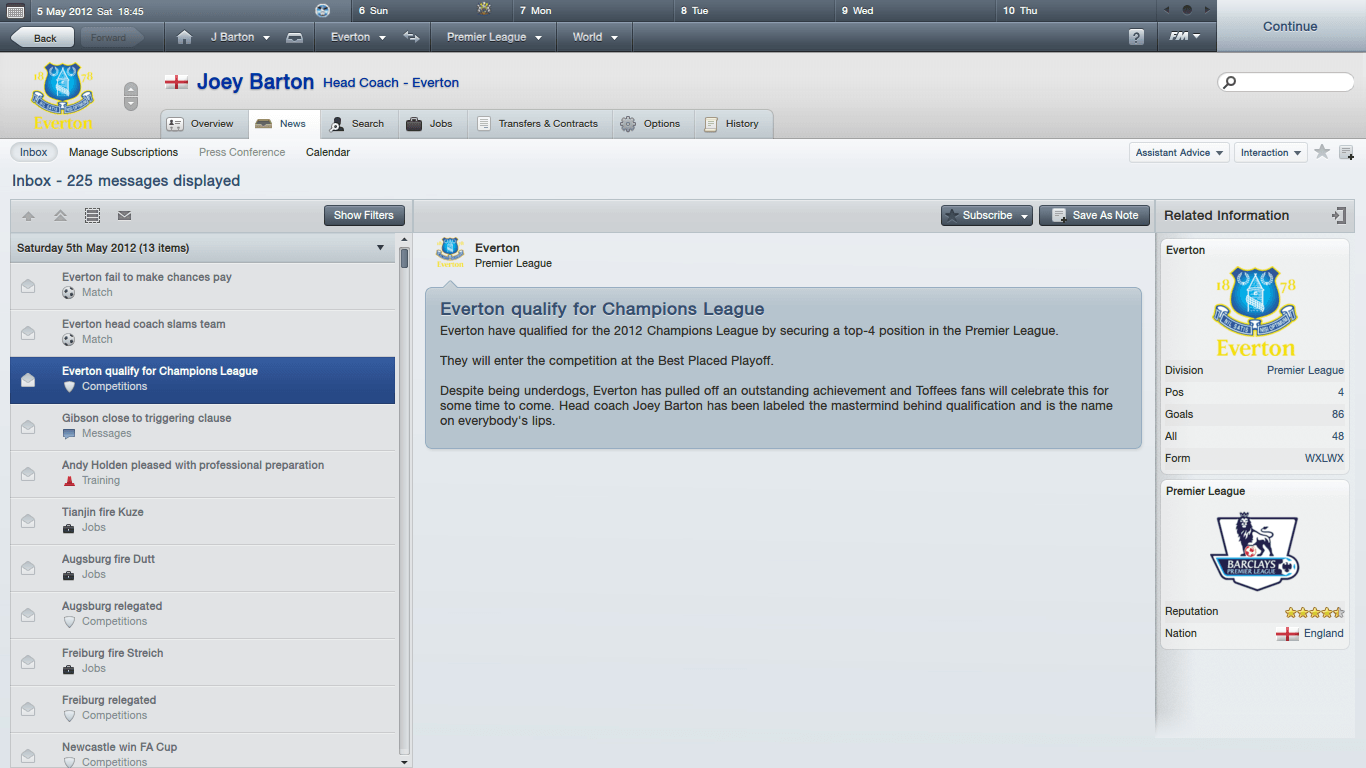 Glenn T
7 years
The European Championships are looming and I am very excited to watch the action, although I don't have a plane ticket to Poland, nor Ukraine, which is where this year's Euro will be held - Business with Everton might keep me busy so I thought I would just stay home to watch the telly, plus I don't think I can be arsed to make such a big trip.

Eurosport has gotten news of the confirmed 30-man preliminary teams for Euro 2012... and a surprise for me is that Salvatore Bocchetti has failed to even make the preliminary Italy squad.

He has had quite a torrid time at Everton, though. Coming to Goodison as an Italy international with 5 caps and a replacement for Leighton Baines, Salvatore got off to a bright start and even earned 5 more caps as well as his first Italy goal. However by the turn of the year, fortunes changed and he found himself injured for three months, and was never quite the same after he returned, making only 19 out of 37 league appearances for the club. 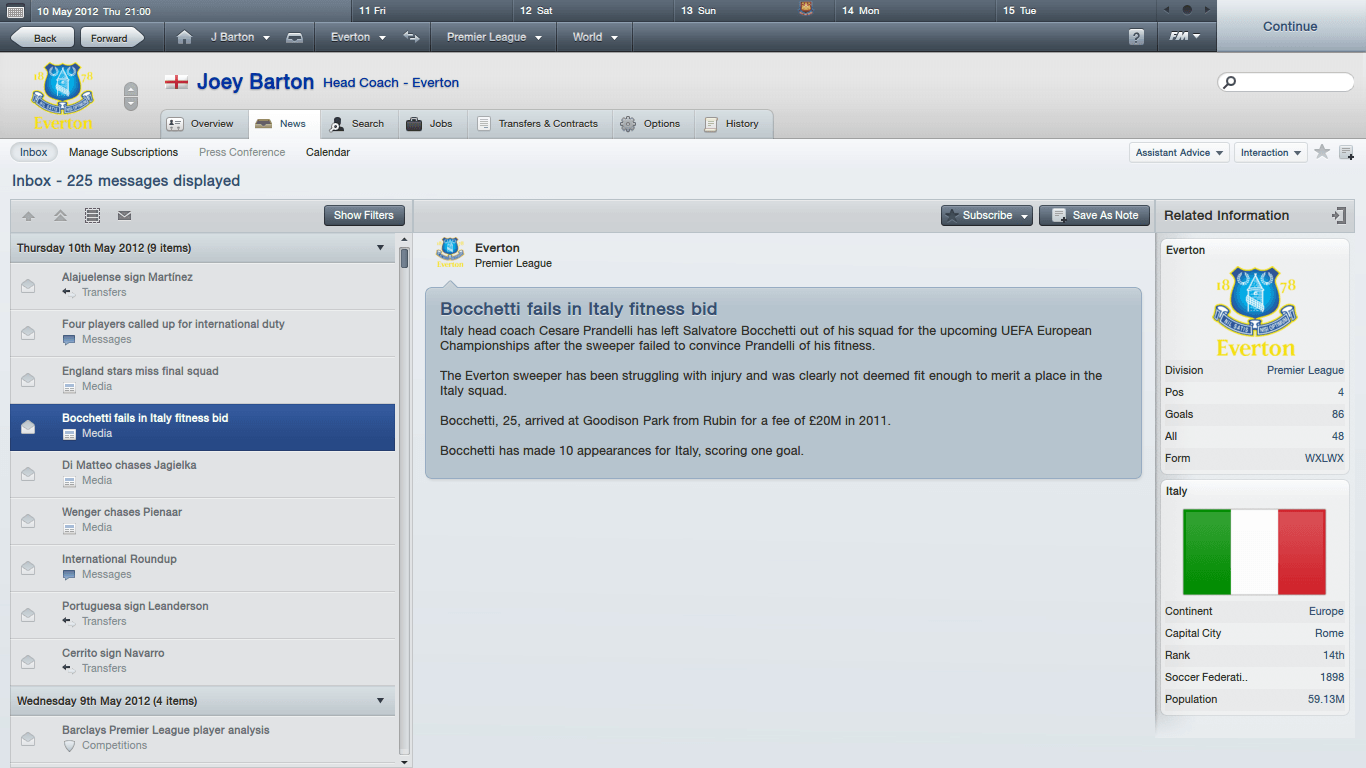 On a more positive note, Phil Jagielka has made the 30-man England squad, while Nikica Jelavic, who has been in very fine goal-scoring form this season, is also in the Croatian squad. John Heitinga is also in for Holland while Apostolos Vellios, who only has 1 senior Greece cap so far, has also made the 30-man Greece squad for Euro 2012.
Login to Quote

Glenn T
7 years
Finally, my first season as a manager is over... 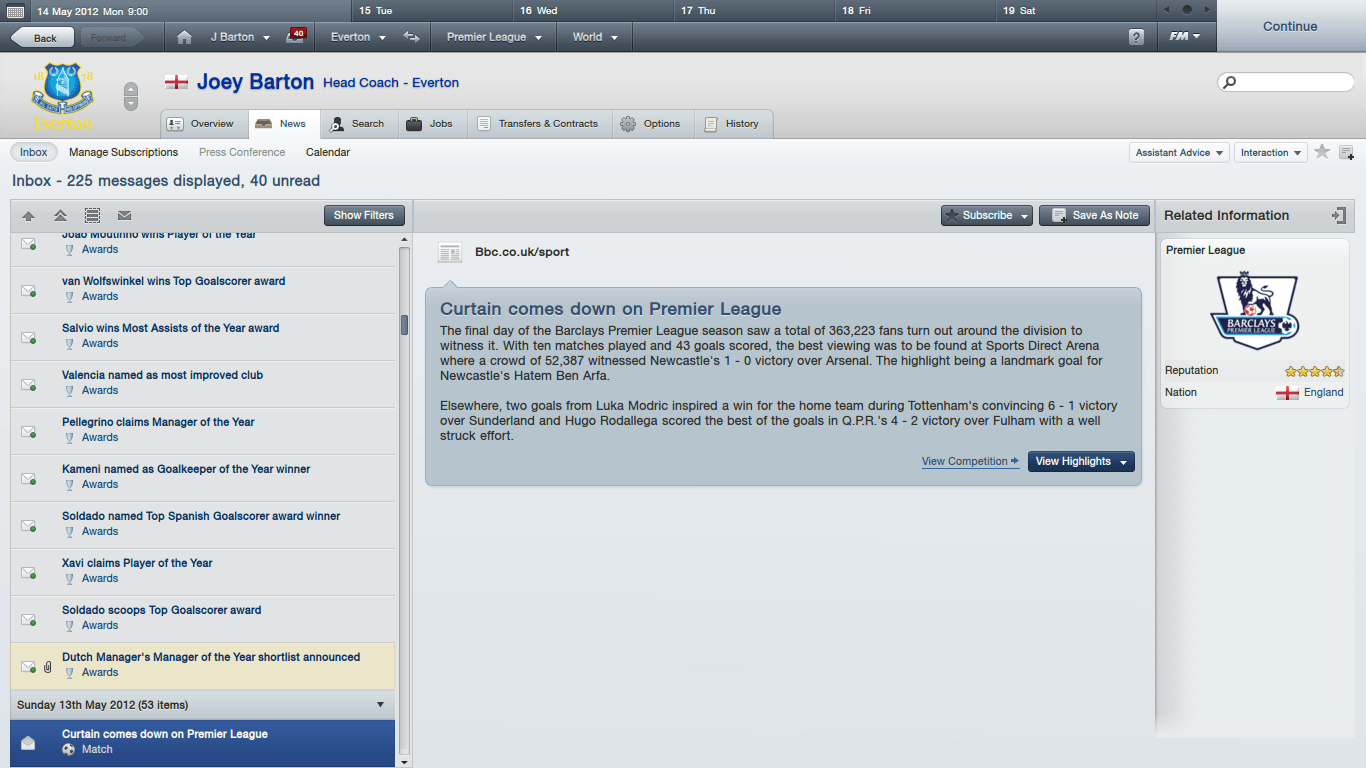 I drew and won my last two games 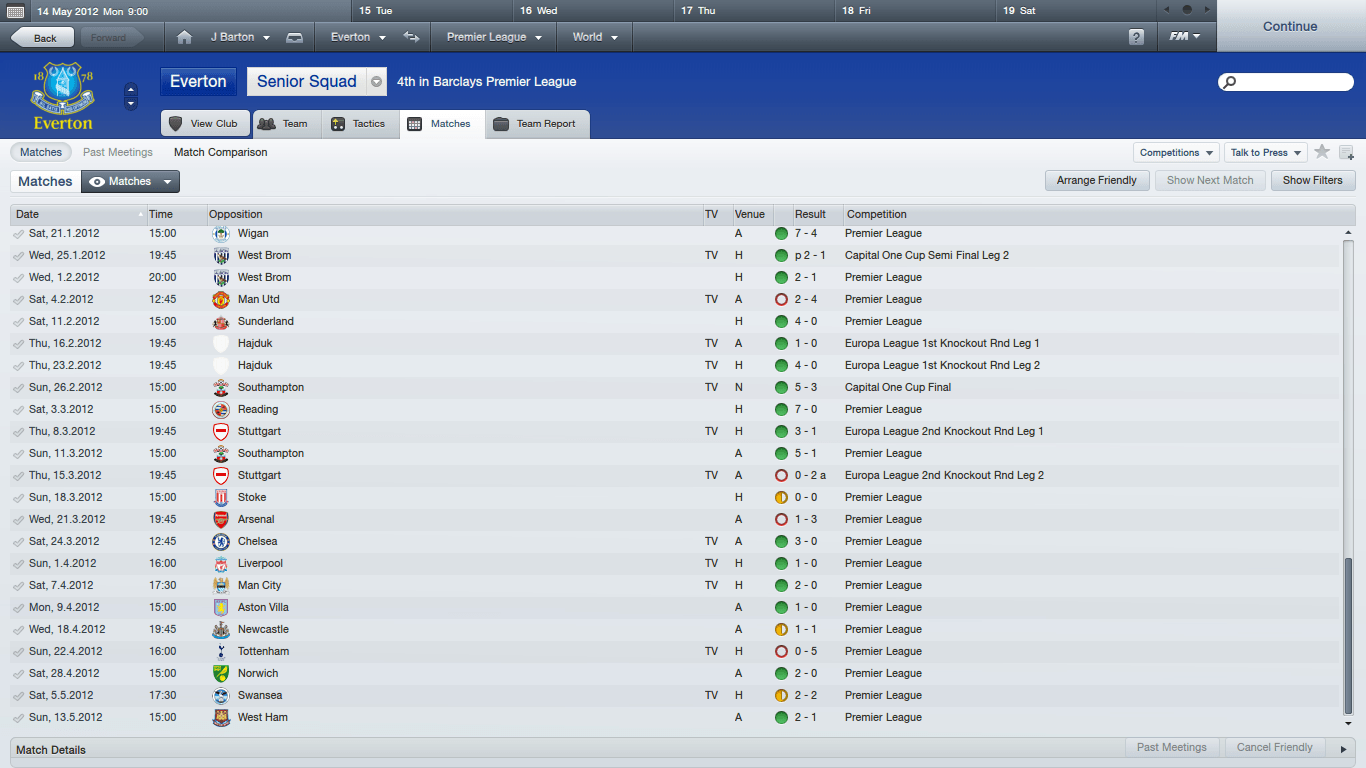 We eventually didn't manage to finish 3rd, but I guess 4th is alright. We condemned our neighbors Liverpool and Arsenal to the Europa League too. 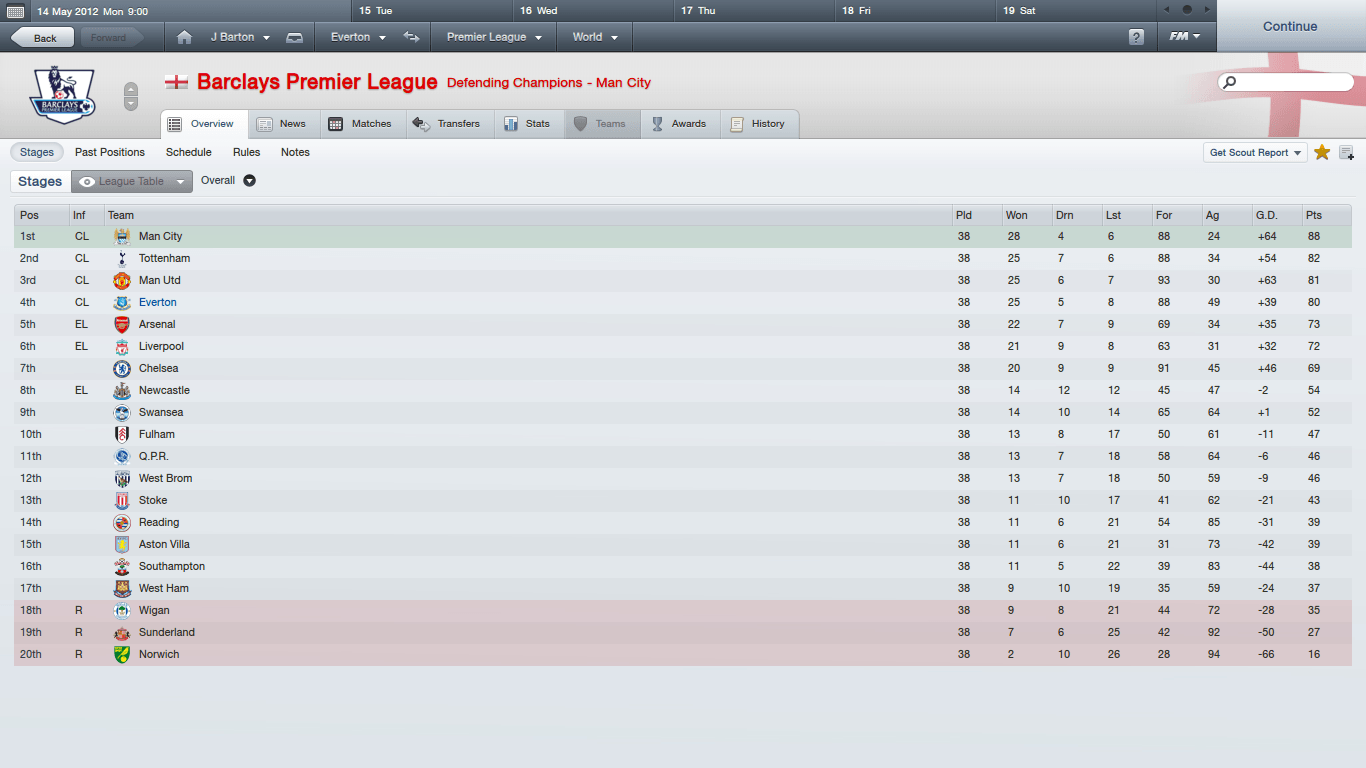 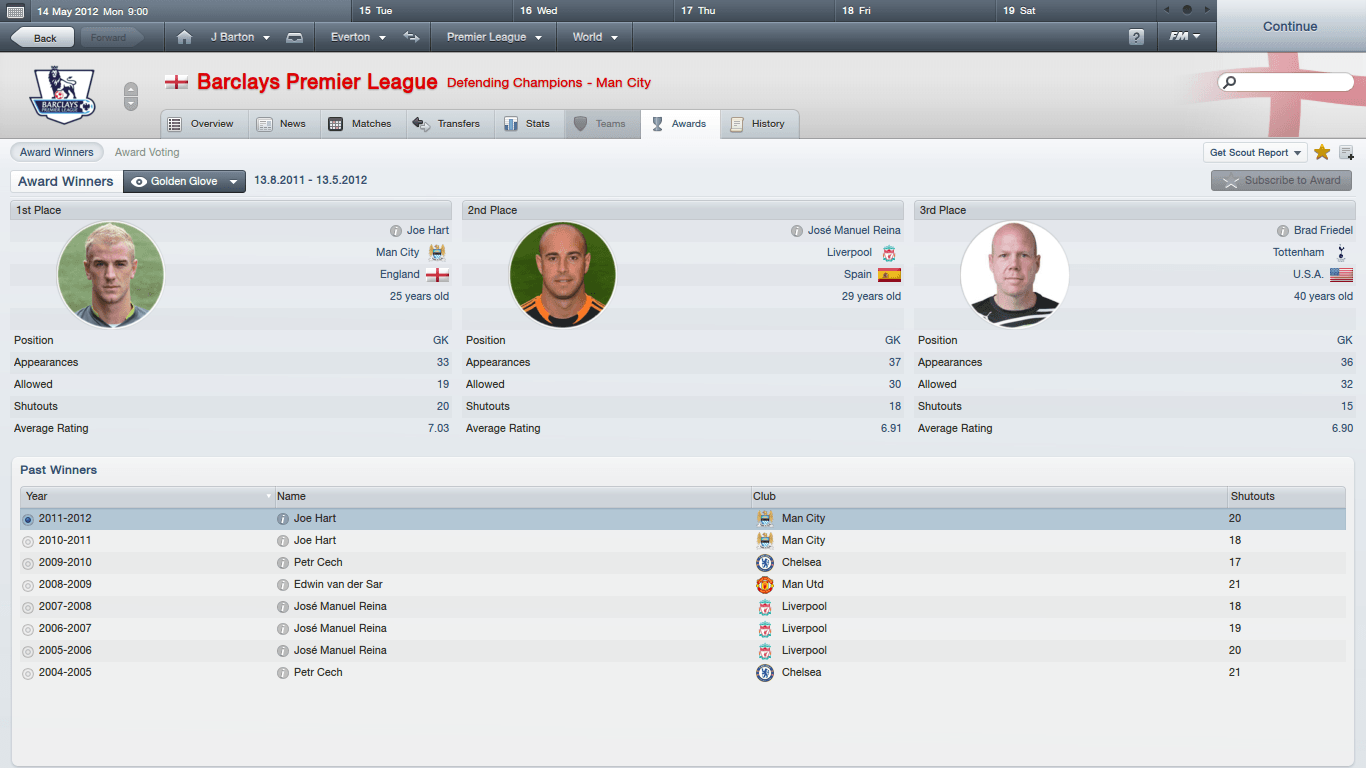 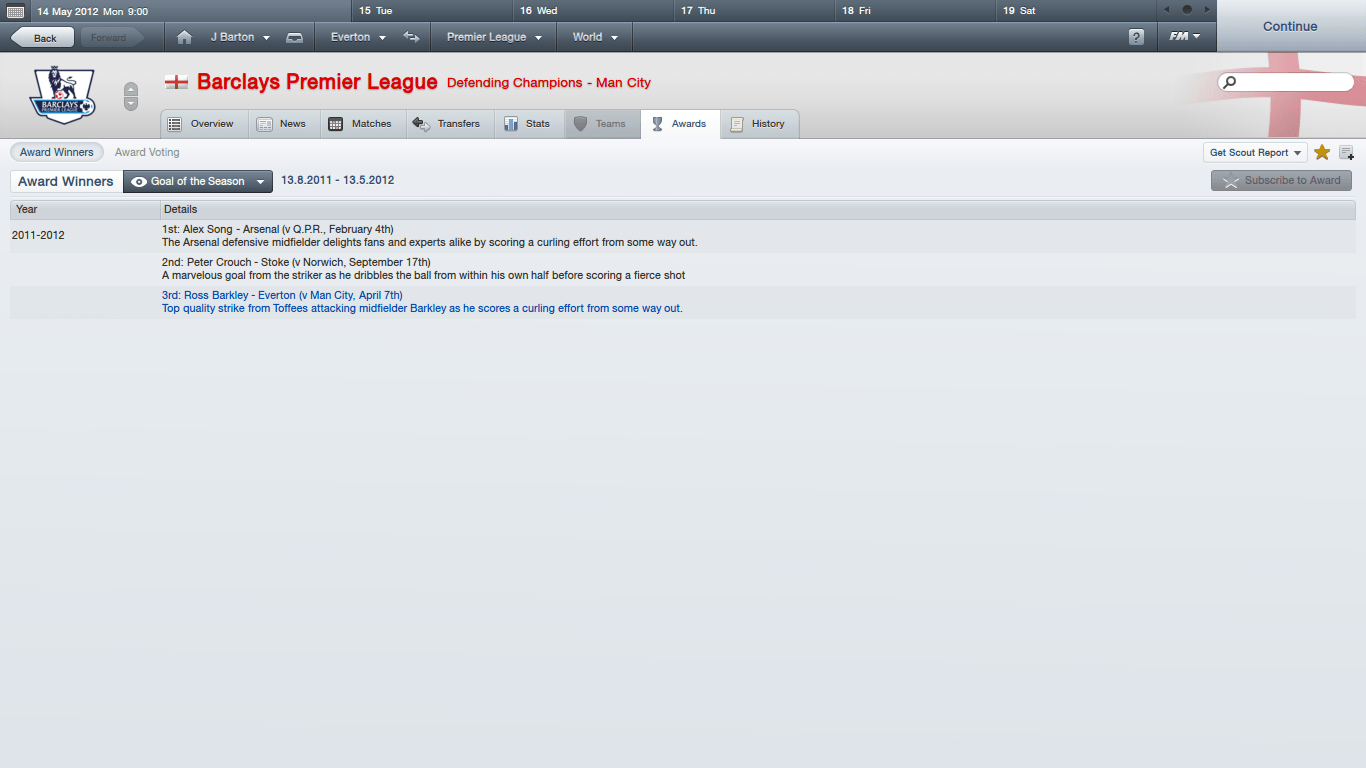 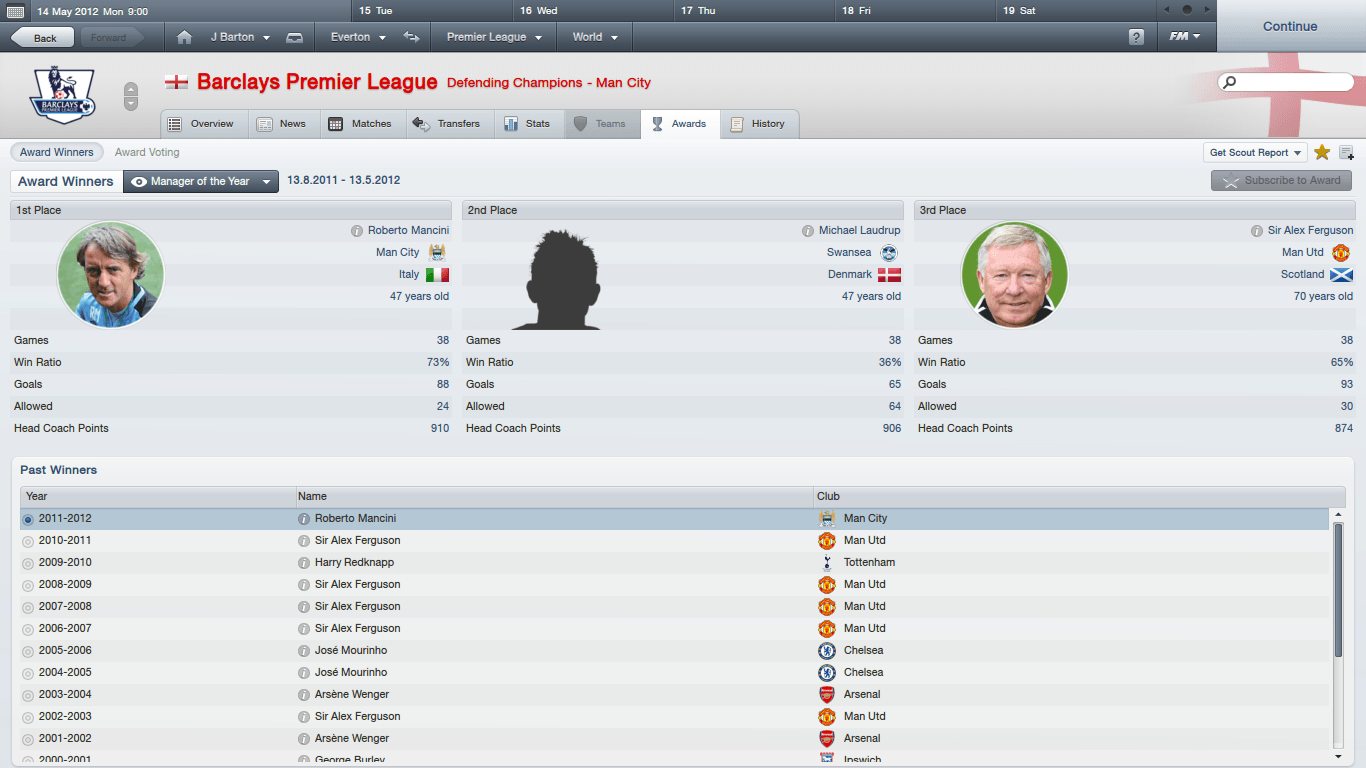 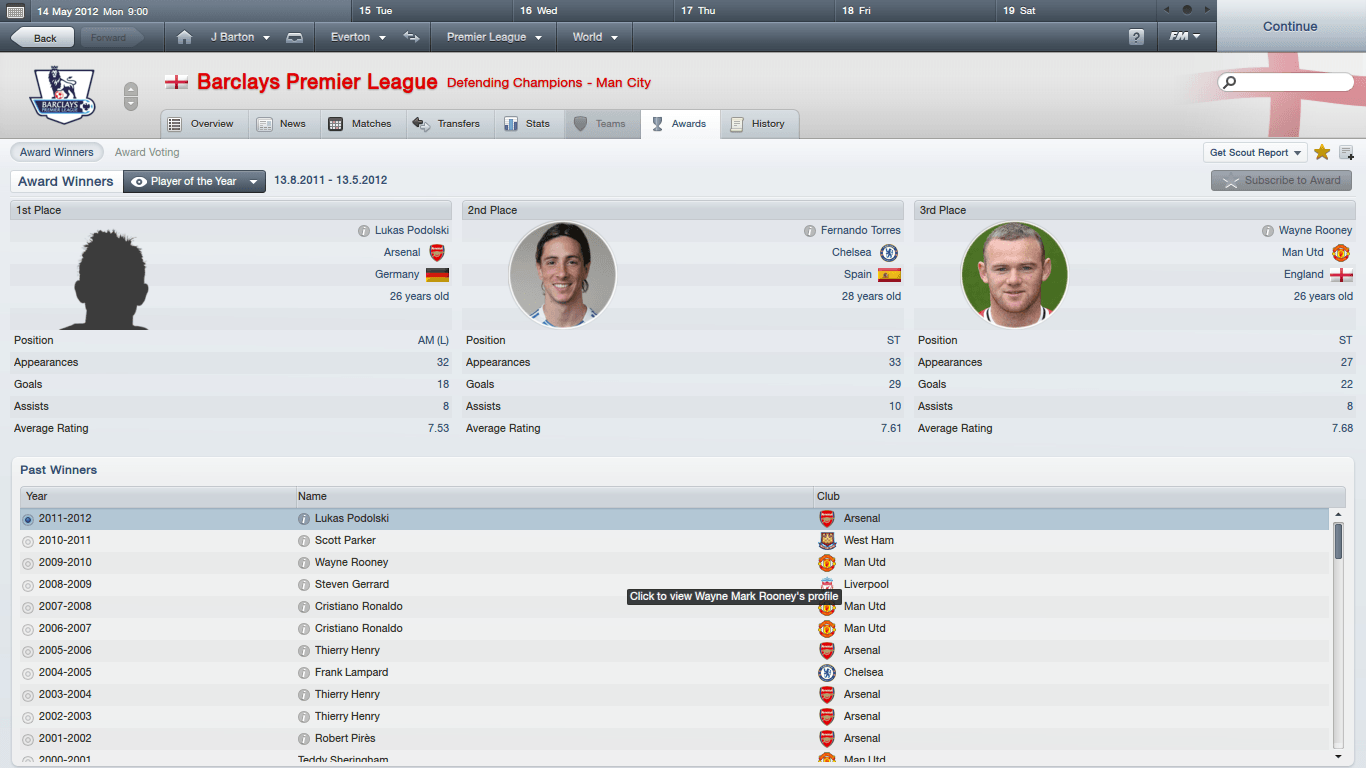 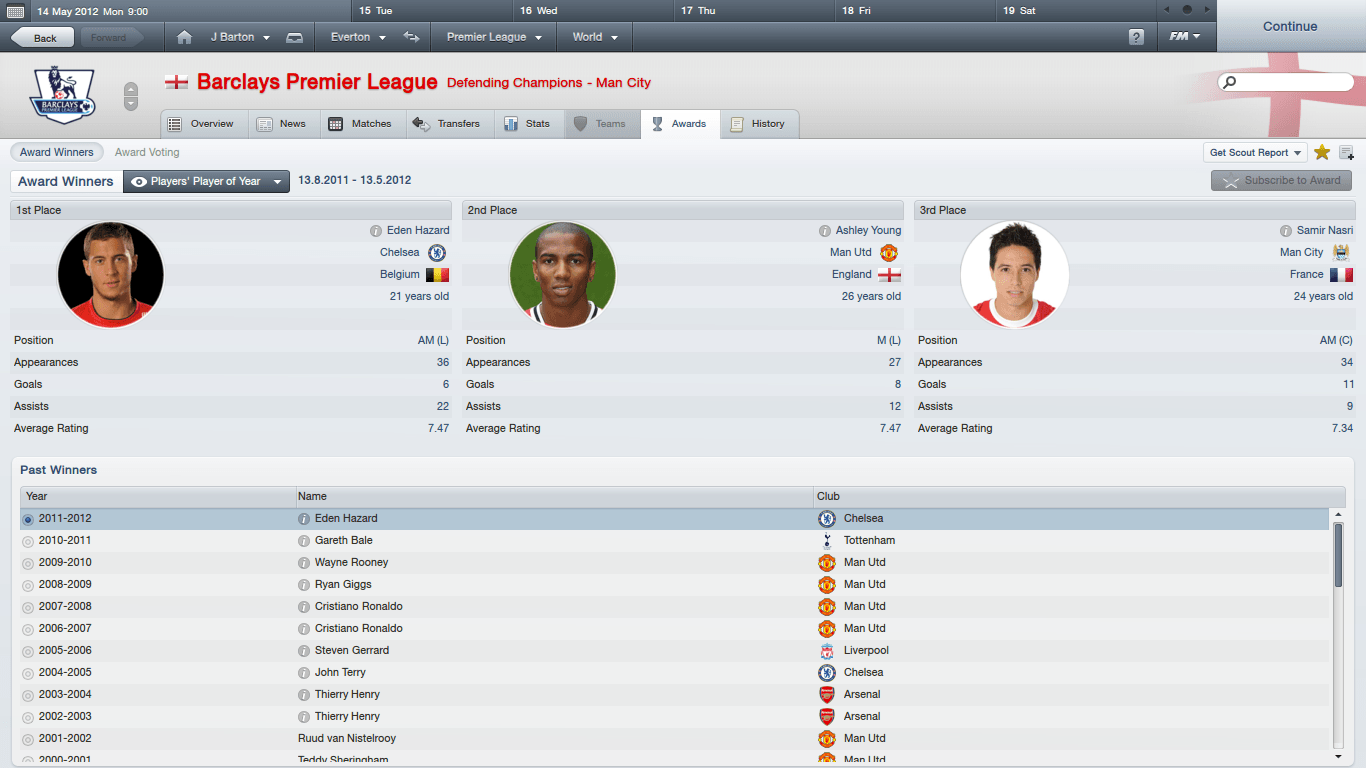 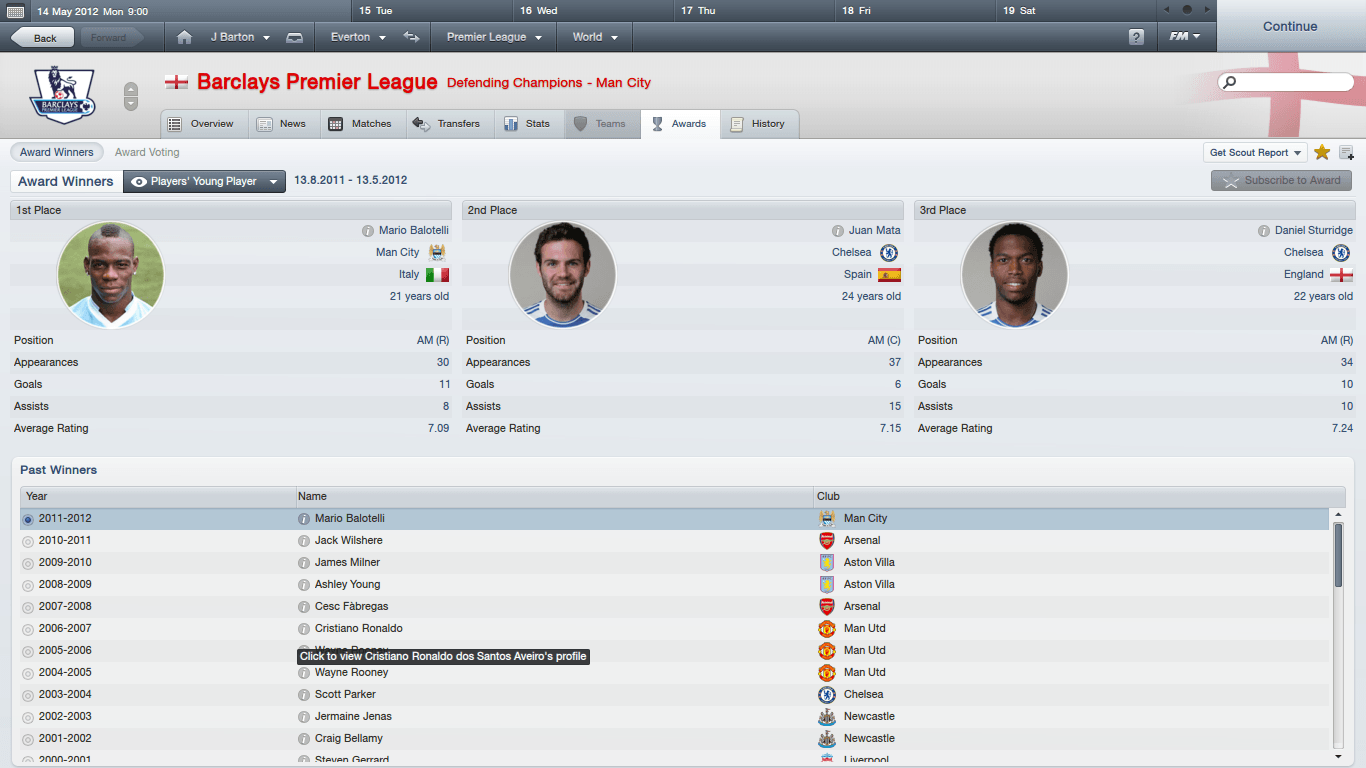 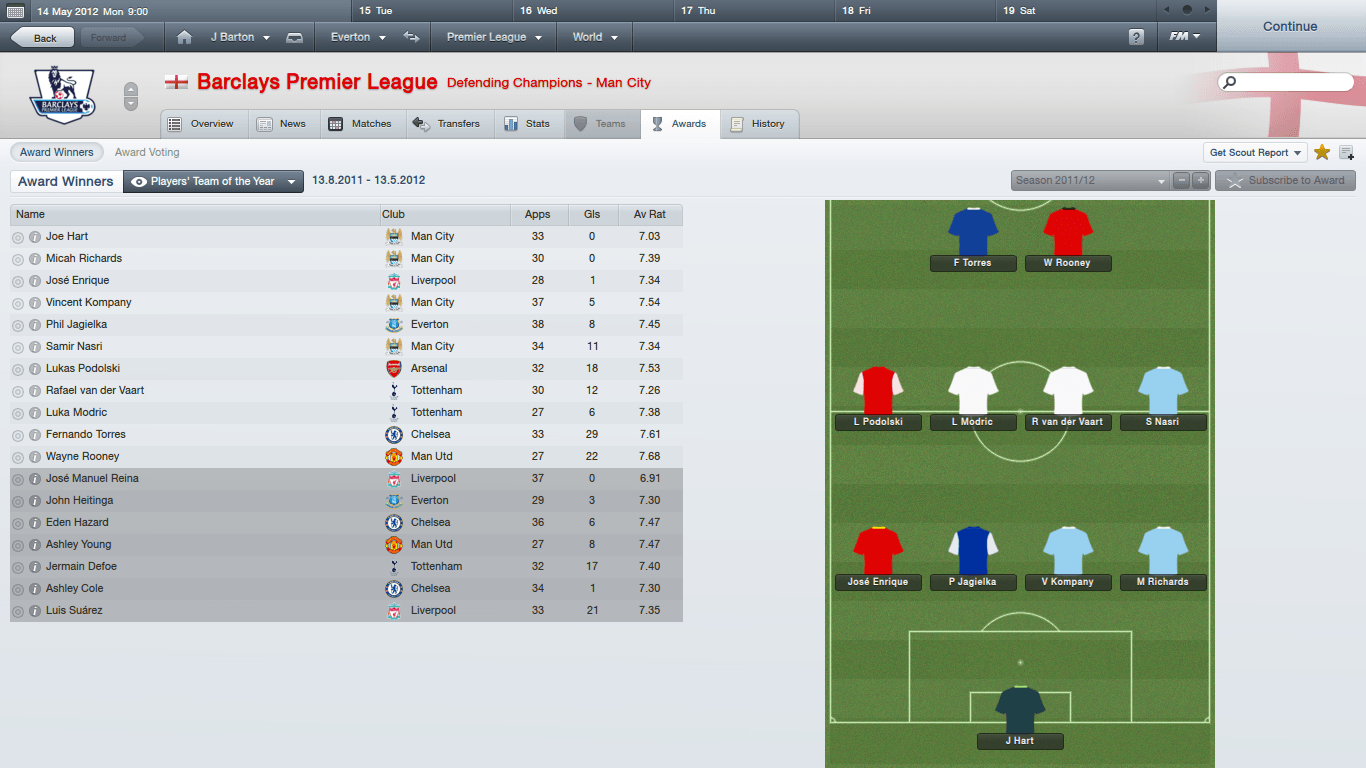 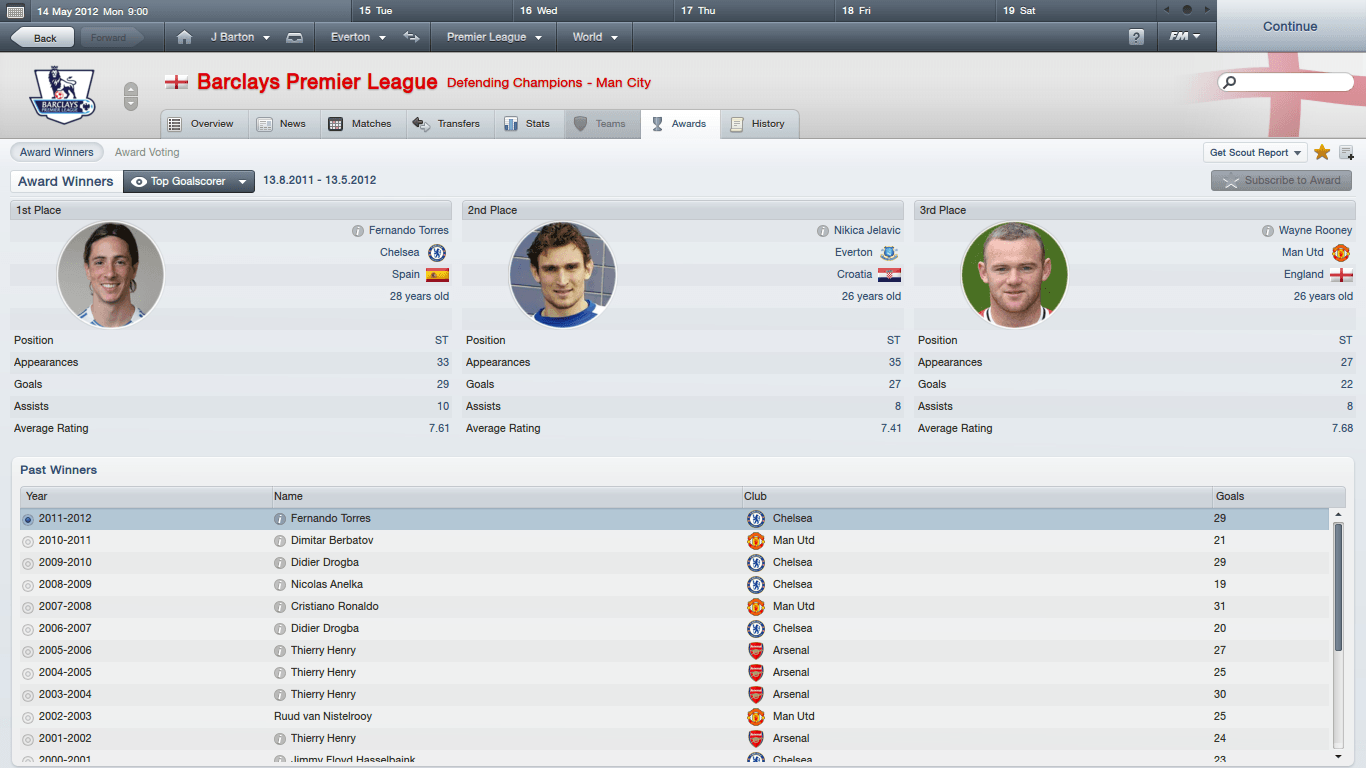 Glenn T
7 years
With Great Britain U23s looking for a new manager, I have decided to throw my name into the ring to manage Britain in the Olympics. It will be fun! 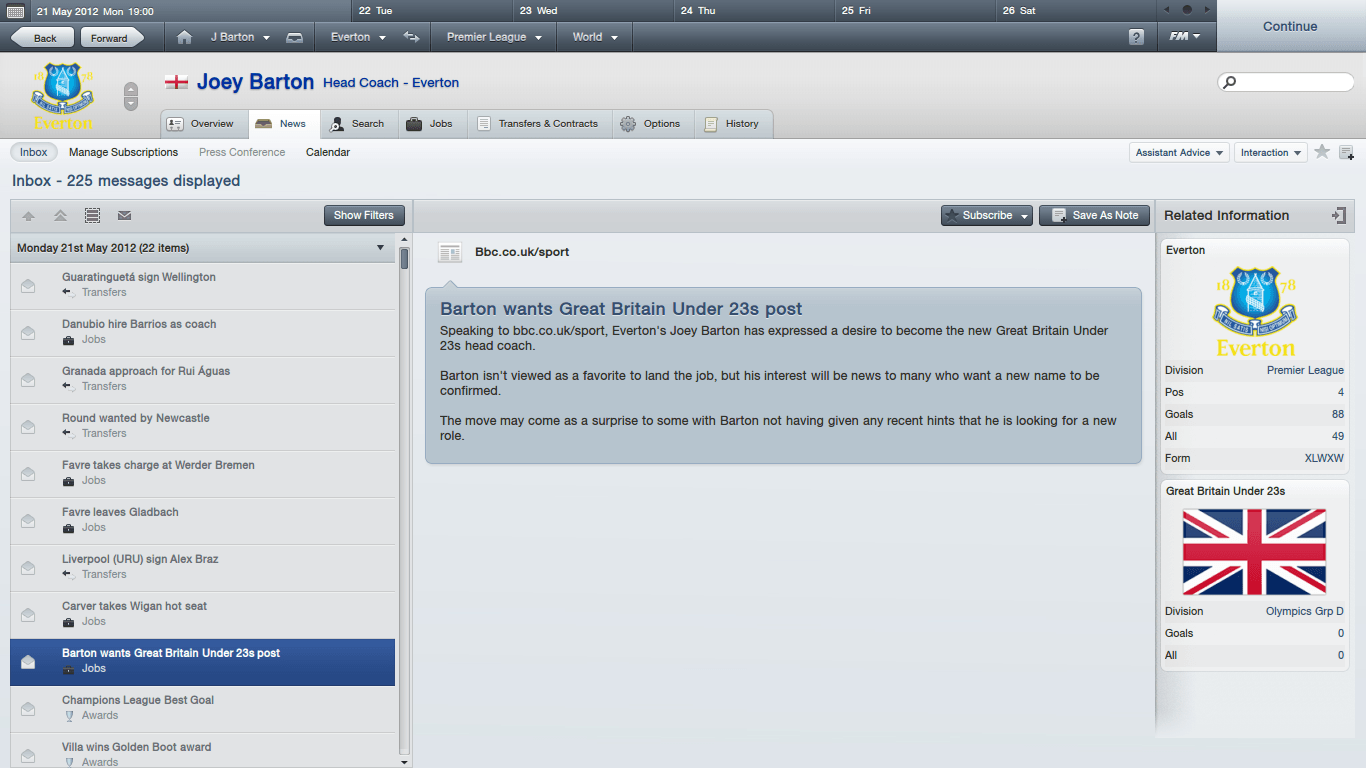 Glenn T
7 years
I have left it to Bill to have talks with Blackburn directors regarding the sale of Shane Duffy. Blackburn, who have been promoted back to the Premier League after just a year in the Championship, is keen on Duffy, while I have also decided to let the Irish defender go after his potential went downhill and his attitude on "not enough first-team action". Eventually, Bill rang my phone and told me that a 2 million fee had been agreed and now it was down to Blackburn to have contract talks with Duffy.

Meanwhile, my application for Great Britain U23s has been unsuccessful, with Alan Pardew, sacked by Newcastle in November and replaced by Alan Shearer, taking the job instead. 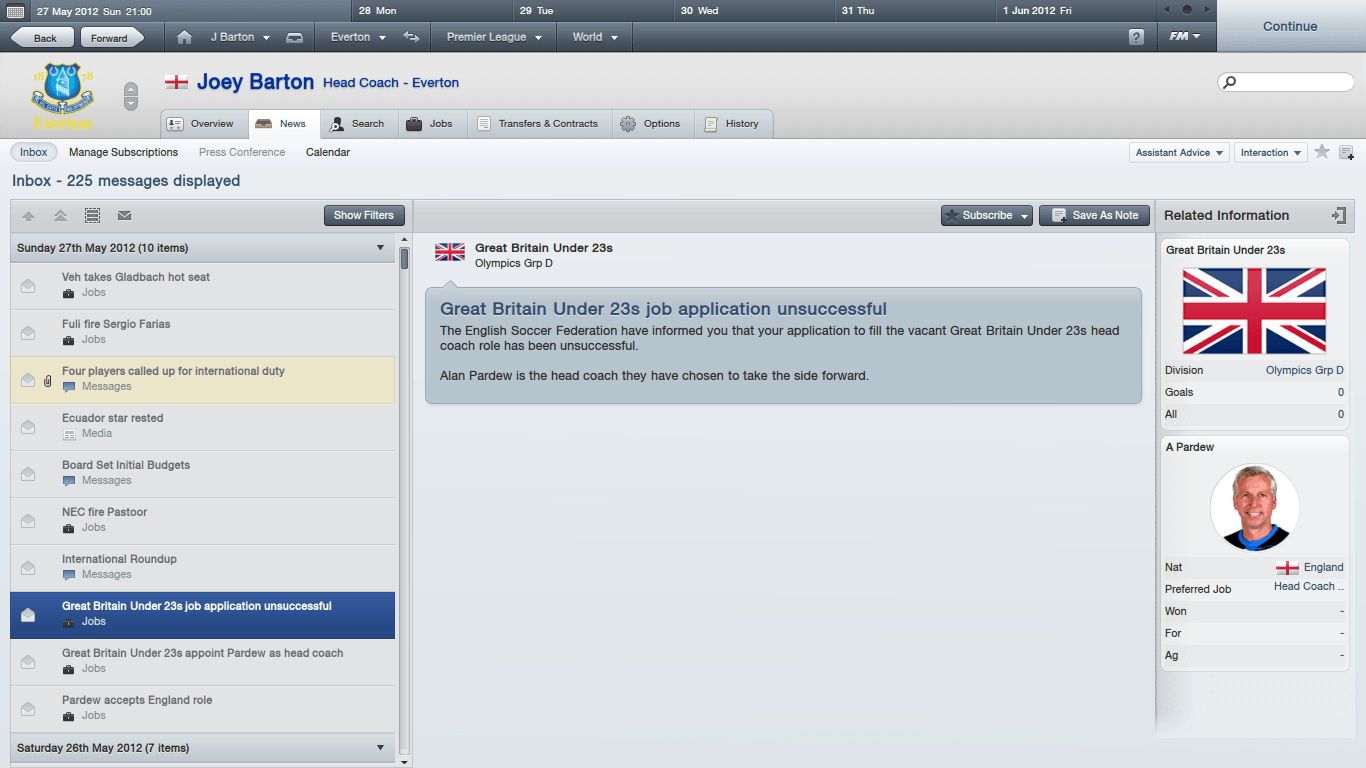 Walsall_Craig
7 years
Great story mate, unlucky about the GB U23's job i dont see much point in it tbh, but got to say you've had an amazing season and fantastic you got Everton back in the Champions League in your first attempt, looking forward to the start of next season and seeing how far you will get in the CL stage


Don't mean to be a bother but would you be able to show me how my team Walsall have got on at the end of the season, if we got relegated or not
Login to Quote