Akash
10 years
Very small update for March, since it was largely uneventful. All I want now is to move to my season summary as quick as possible.


March 13th is the date when regens are produced in England, and this is the group of kids we got this year. Sharing the city with Manchester United, Manchester City, Bury and a lot of other teams, it is obvious we wouldn't get the best ones. 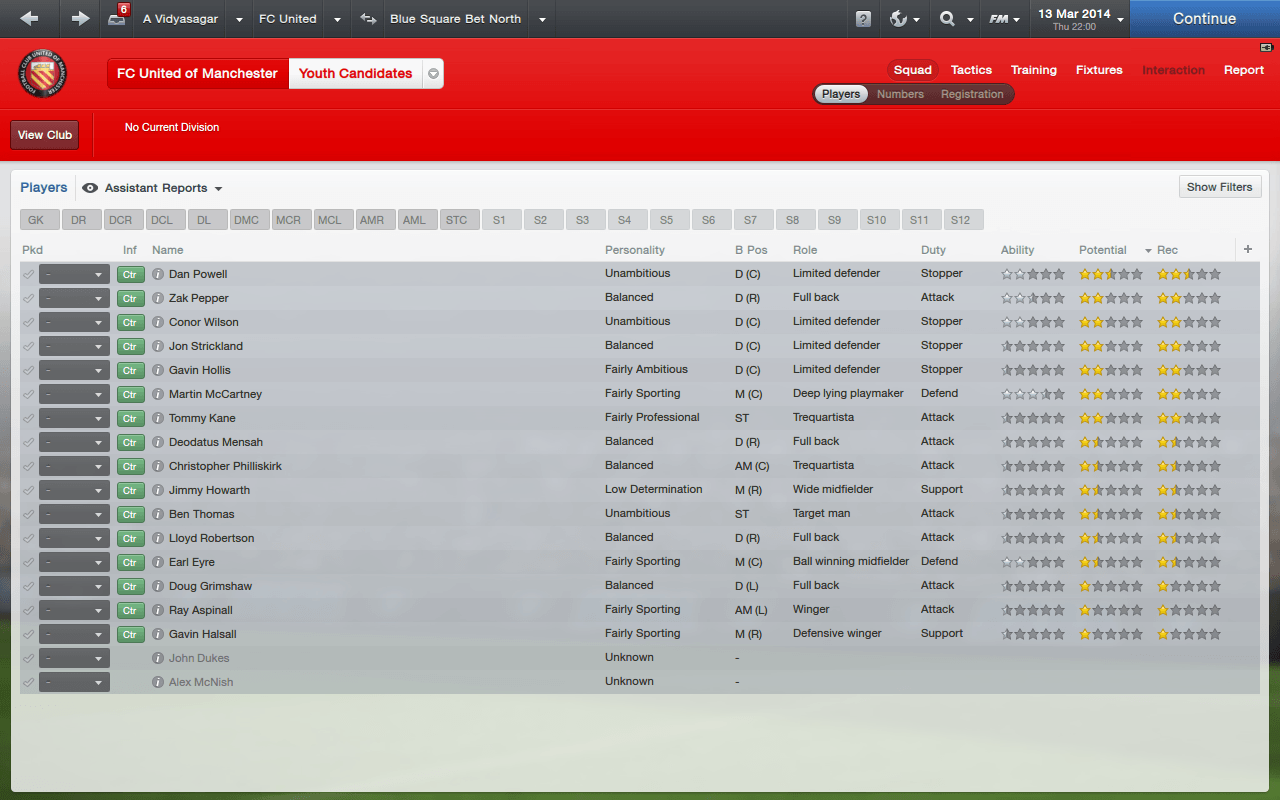 But even though they aren't good enough to get into the first team, they are still head and shoulders above our current Under 18 team, beating them 2-1 in the youth evaluation friendly.

Getting a possible 10 out of 15 points, this could've been better or could've gone worse. The best thing about this month was that we had opened up a 5 point lead over Chester, and with 6 games left, we are in prime position to be promoted. Our matches in April are a little easier than this month, with Leamington, Harrogate and Corby in the lower half of the league. Also, we have secured a playoff spot. 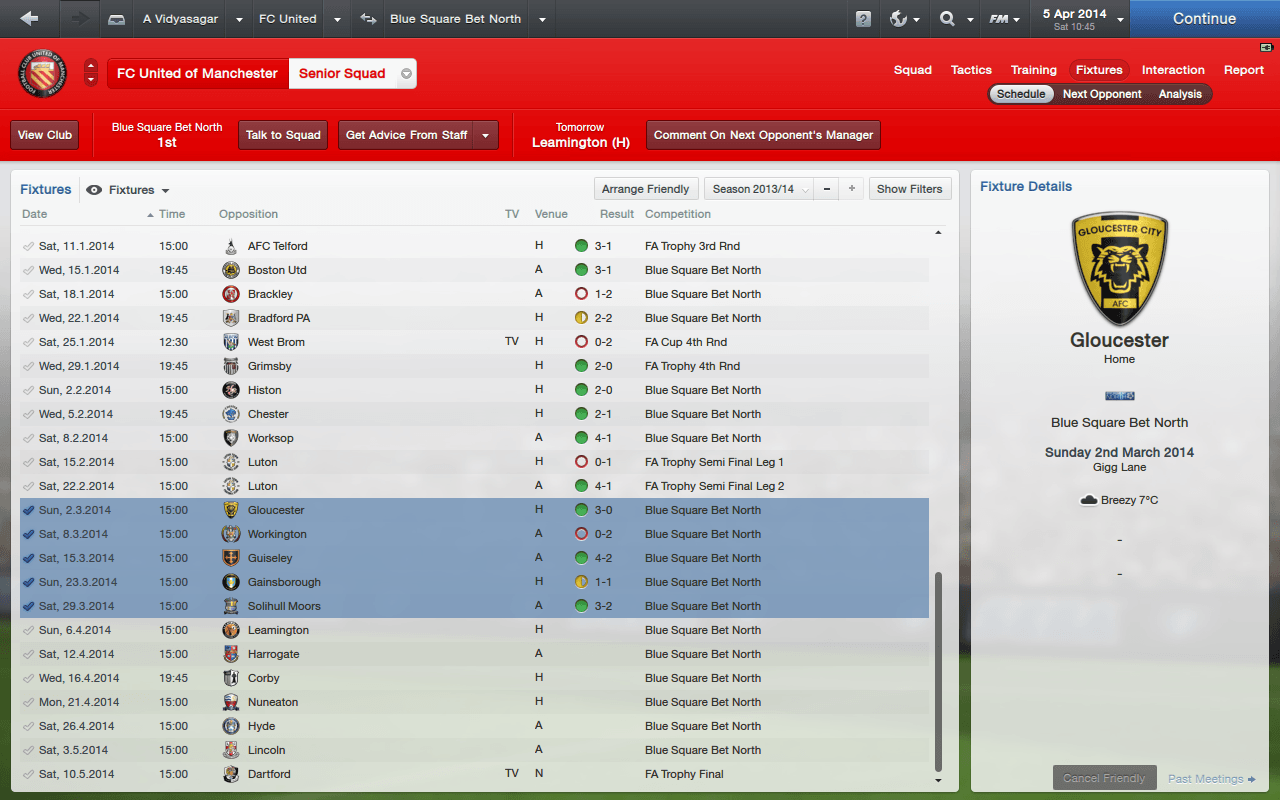 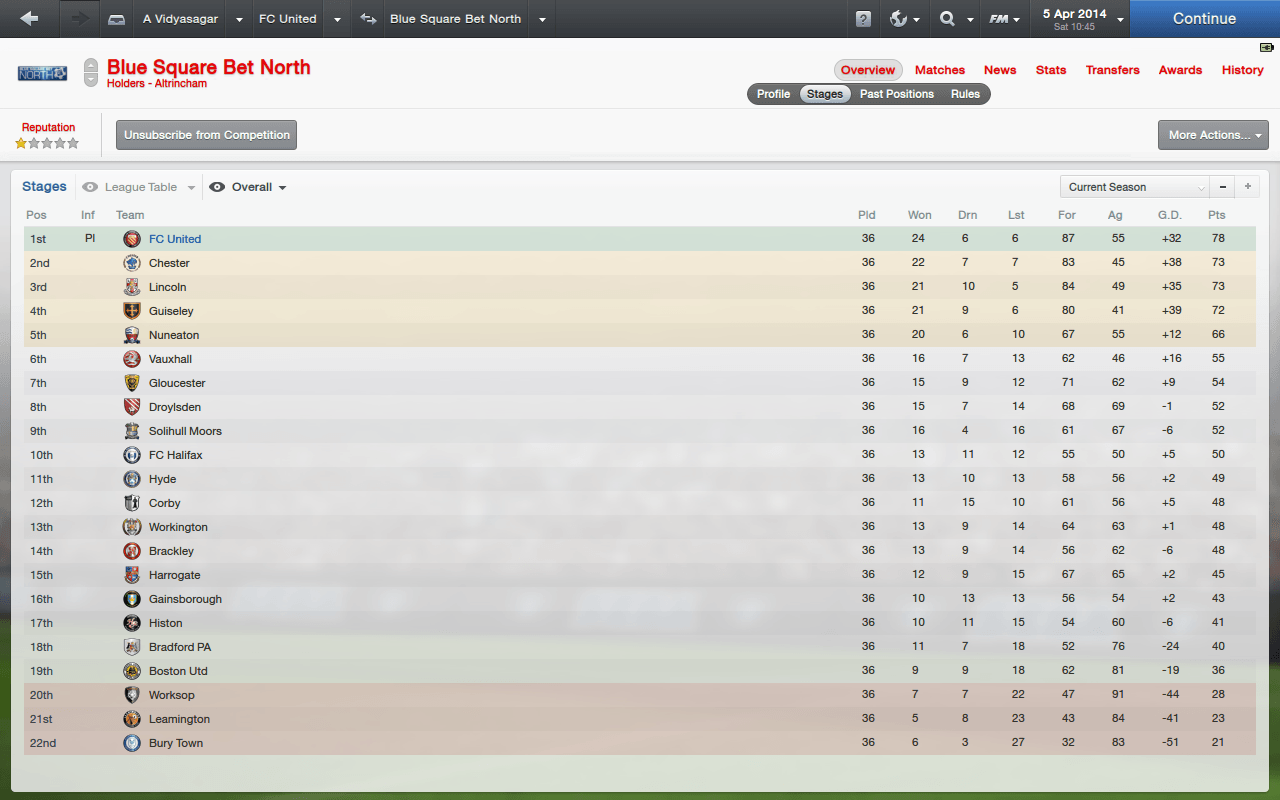 What is the injury AI like in FM13? Are your team feeling the affect of playing the long season?
Login to Quote

I hadn't had any major injuries (2 weeks +) until March. Then it began. My first-choice keeper is out, my playmaker is out, my best winger is out and one of my strikers too. It could be because of the numerous match we played in the past months, but I've been resting my players everytime they have "RST" next to their name.
Login to Quote

Kiwi
10 years
That's the way to do it, but it is hard in the lower leagues where stamina is not so important. Hope your spirit shines though and you are able to complete the auto promotion.

Sometimes I have just signed players because of their utility value, but I am glad that there doesn't seem to be the spate of injuries that happened when FM'12 was first released.

I hadn't had any major injuries (2 weeks +) until March. Then it began. My first-choice keeper is out, my playmaker is out, my best winger is out and one of my strikers too. It could be because of the numerous match we played in the past months, but I've been resting my players everytime they have "RST" next to their name.

jimgooner
10 years
Lovin the story Akash, keep it up!

AmNeSiA_CFC
10 years
Keep up the good work Akash very good so far. You know how to write a good story


FA Cup
- What an incredible showing in the FA Cup. I was surprised to reach the 3rd round, and completely shocked to beat Swansea. We will have to perform equally better next season, if we are to repeat this performance.

FA Trophy
- Equally surprised to have won the entire league, but a little more believable. The loss against Luton had got me worried, but we got through the blip and came out as winners.

We are now a professional team, which means we'll need a lot of full-time contracts. 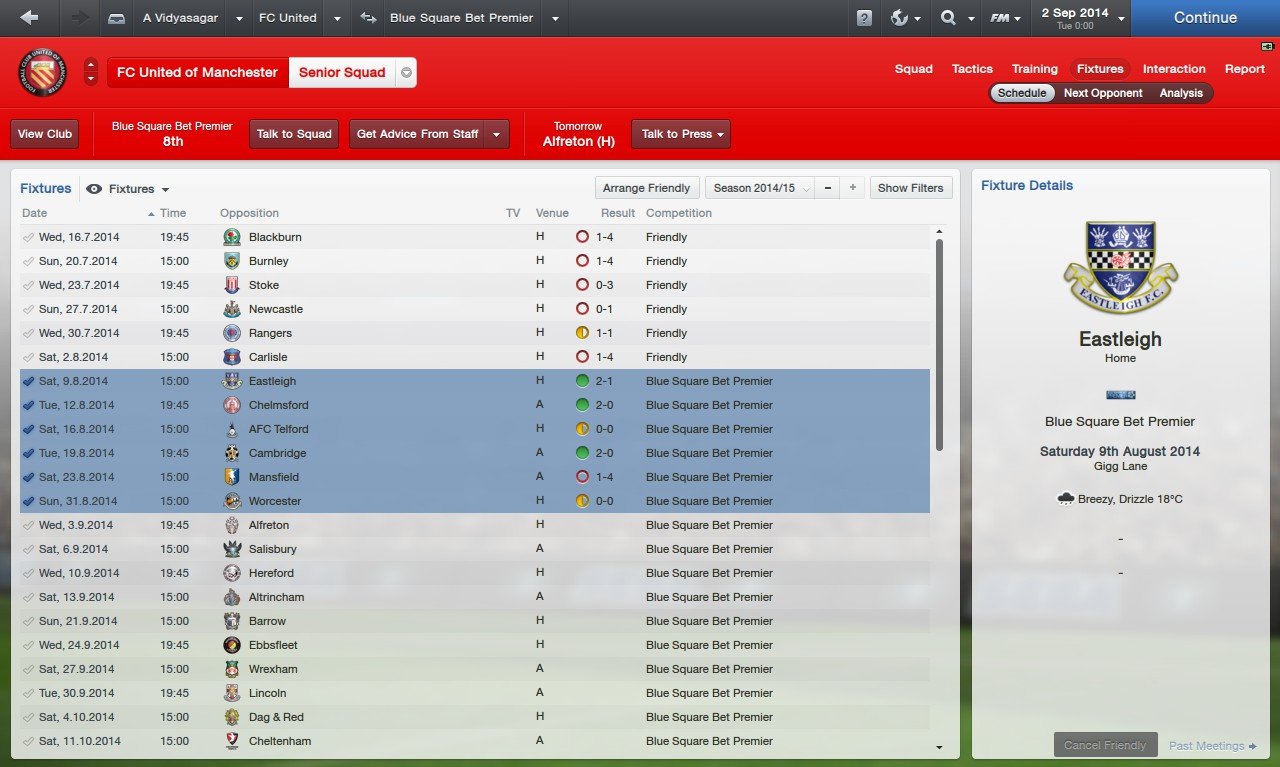 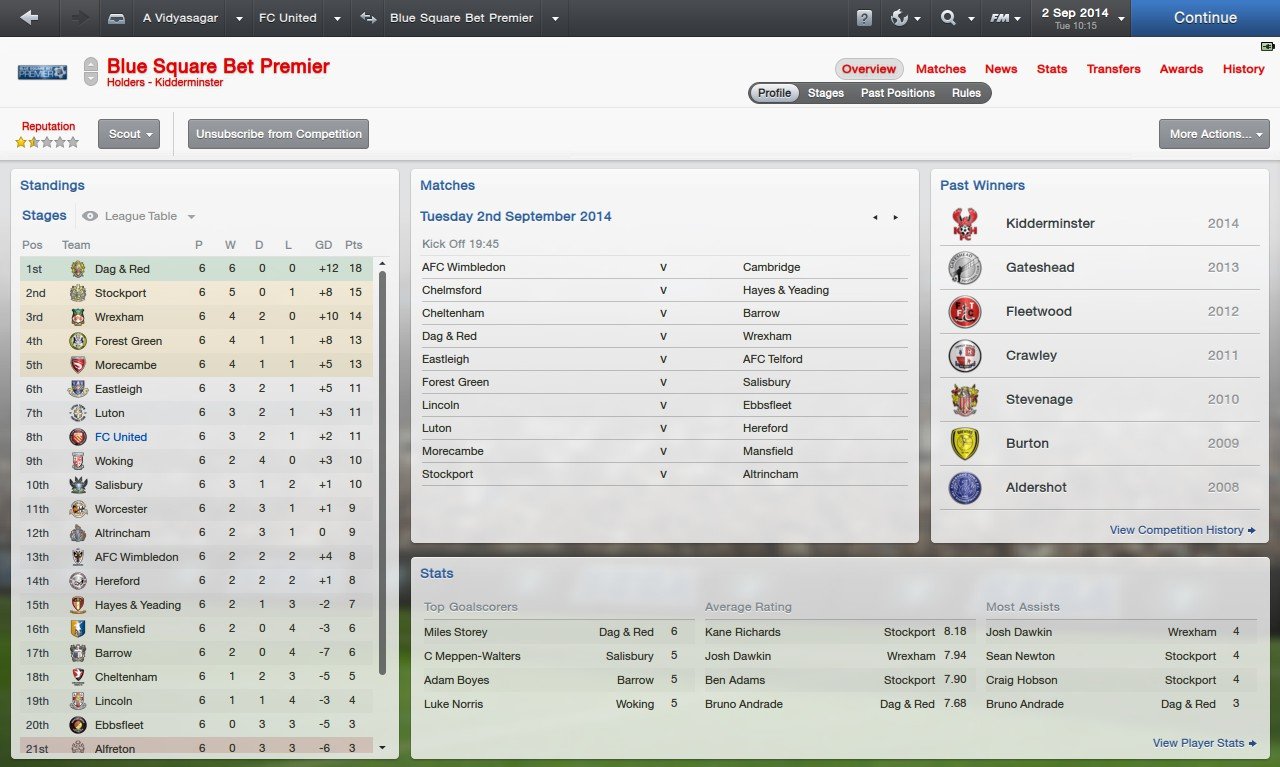 FC United is back! Special thanks to 'thepharaoh' for giving me that final push to do something crazy and retrieve this save.
1
Login to Quote


I was worried, like anyone would be, about the fixture congestion caused by the FA Cup and FA Trophy, but I guess I will not have to wait until October/November to have my players complaining of fatigue. With us playing eight games in twenty eight days, I knew a series of losses was on the horizon. 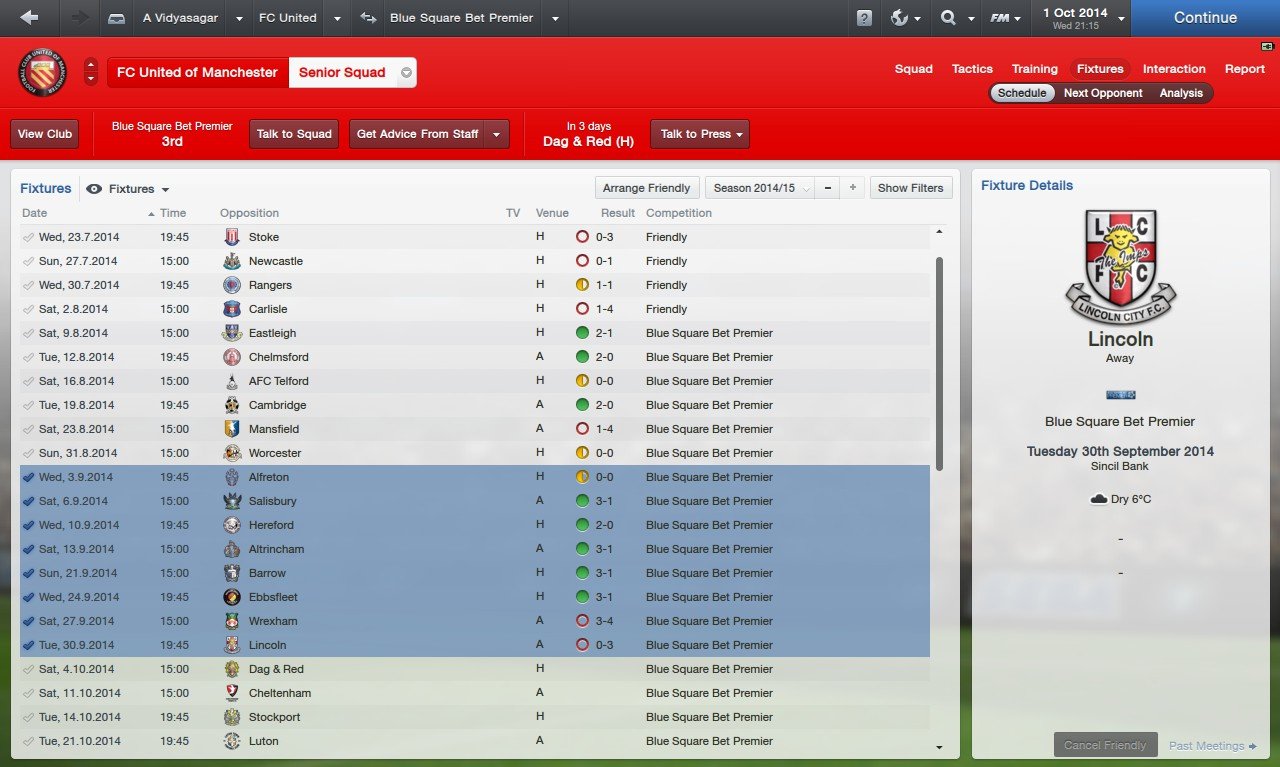 Starting off on a three-game winless streak, we went a brilliant six-game winning streak. Just when I thought our month would be the best one ever, Wrexham and Lincoln brought us back to reality. What will hurt us most is the loss against Lincoln. They were promoted along with us, so there shouldn't been a such a big gulf in class between us. What we need to do now is figure out where we are lacking, and improve our game. My guess would be my full-backs. Coupe is a very good defender on paper, but he just hasn't dont well enough. His last two match ratings were 5.2 and 5.3, which is ridiculous. Moffatt will be getting his chance in the first-team from here on out. 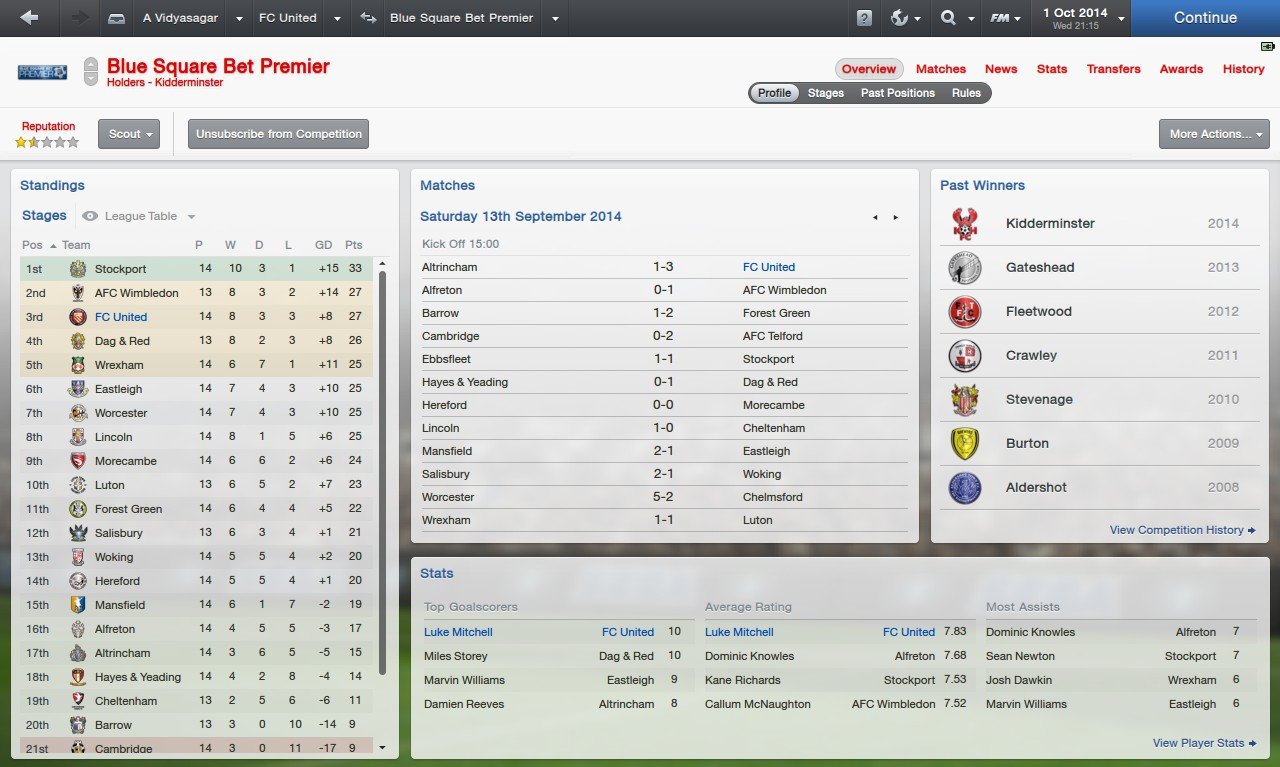 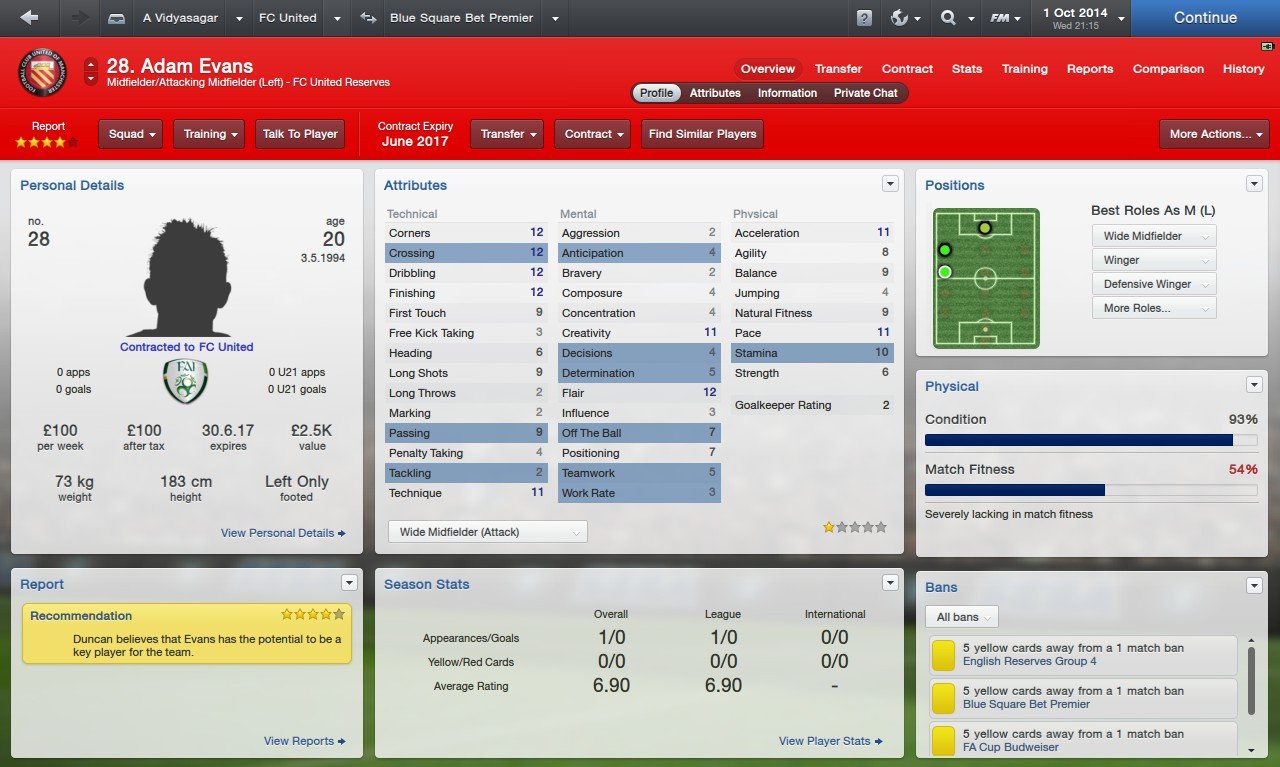 With Sutton being a little injury-prone, I needed some backup in the left-midfielder slot. On a ridiculously cheap wage of £100 per week, I wouldn't mind if he just sat on the bench for a couple of years. Also, with the attribute of finishing at 12, he might just get his turn further forward. 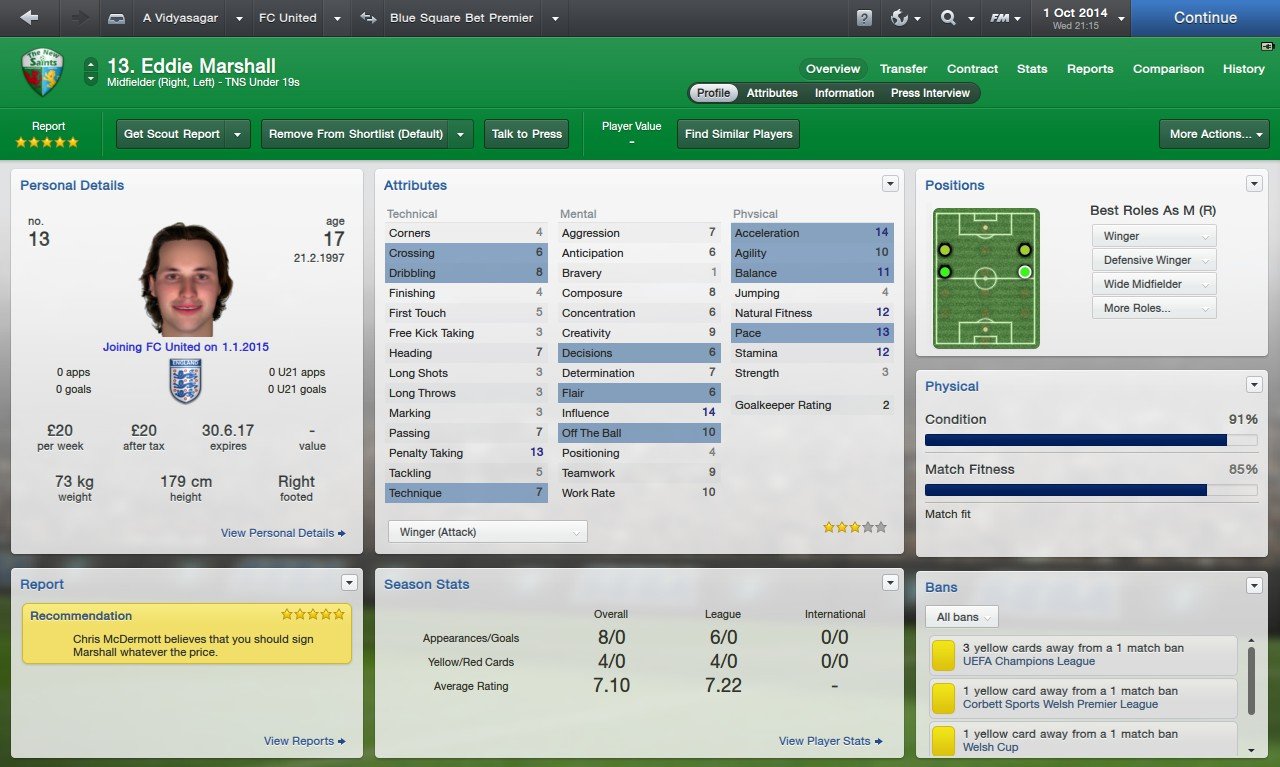 I'm not a big fan of this guy, to be honest, but my assistant manager thinks he is good enough to someday play in League One. I've tied him down to a contract till 2017, so I make some money. 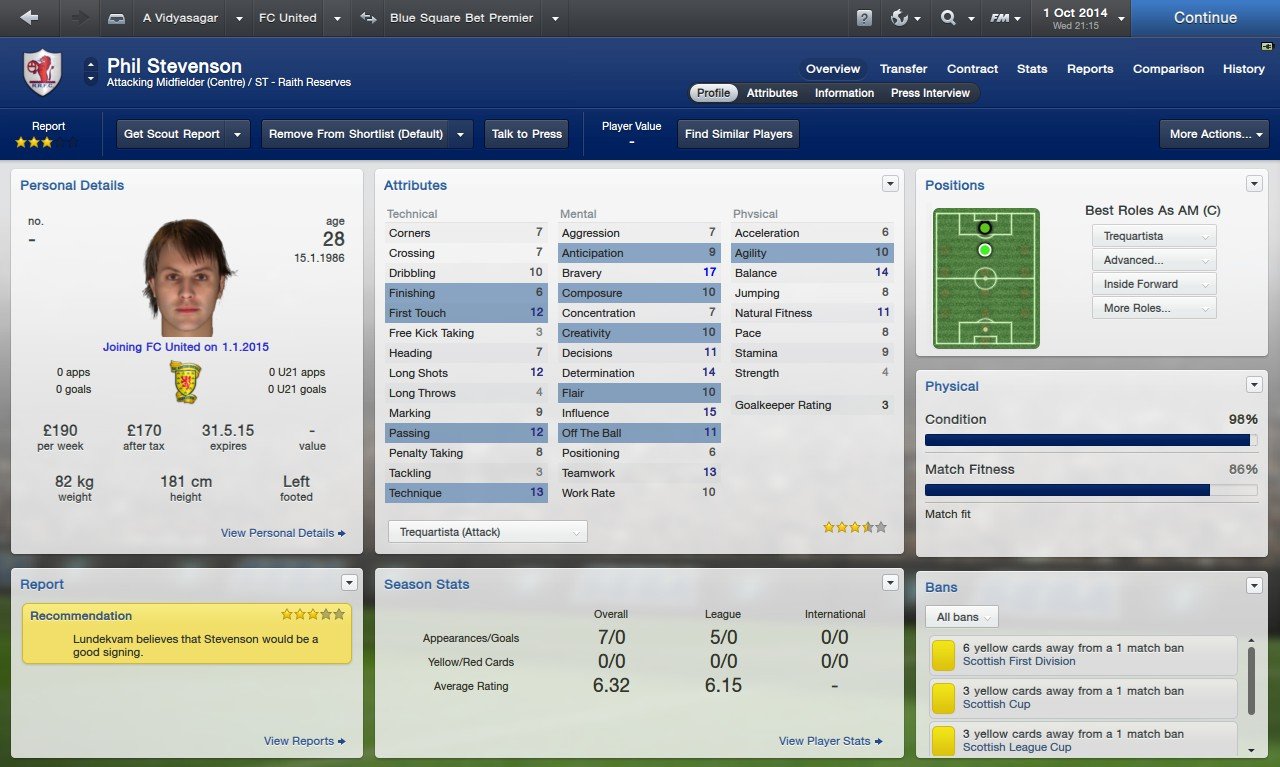 I'll admit it, I only got this guy because Chester wanted him. I just don't want them to join me in the Blue Square Bet Premier, if I were to not go straight up. Another player on a very cheap wage. 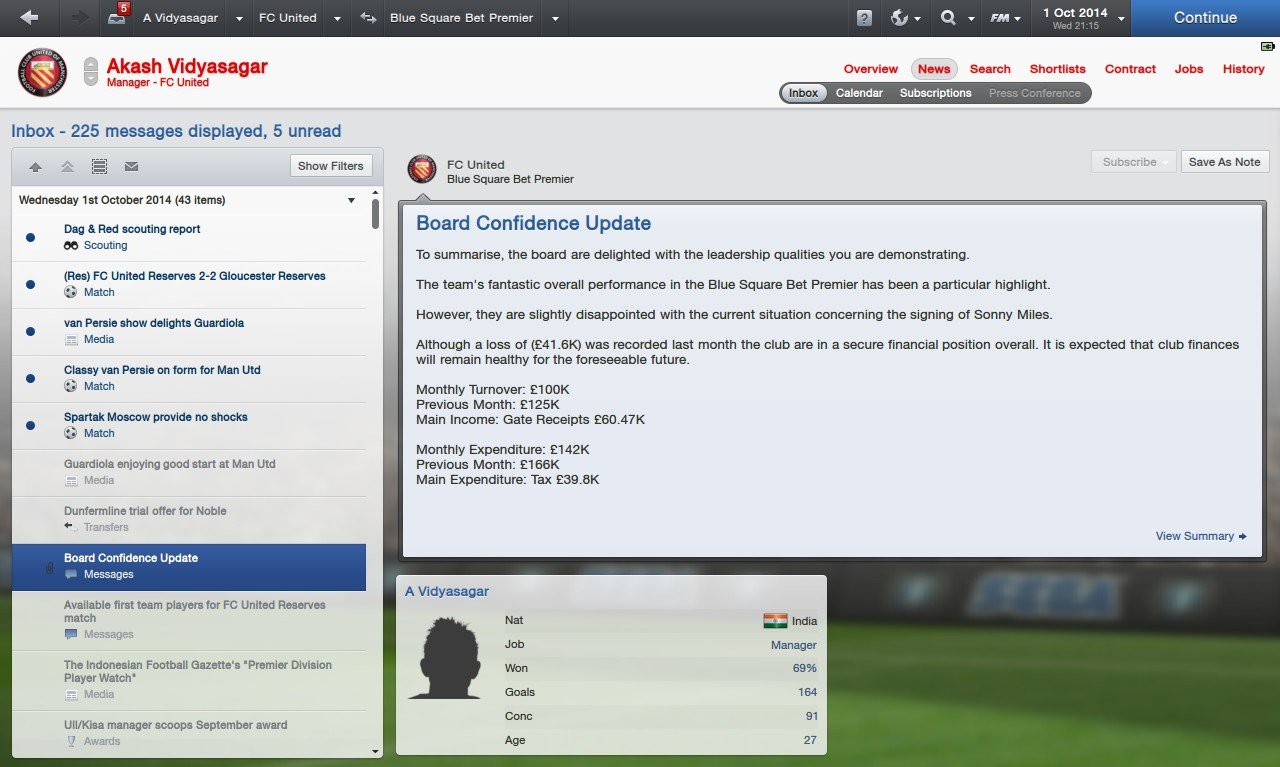 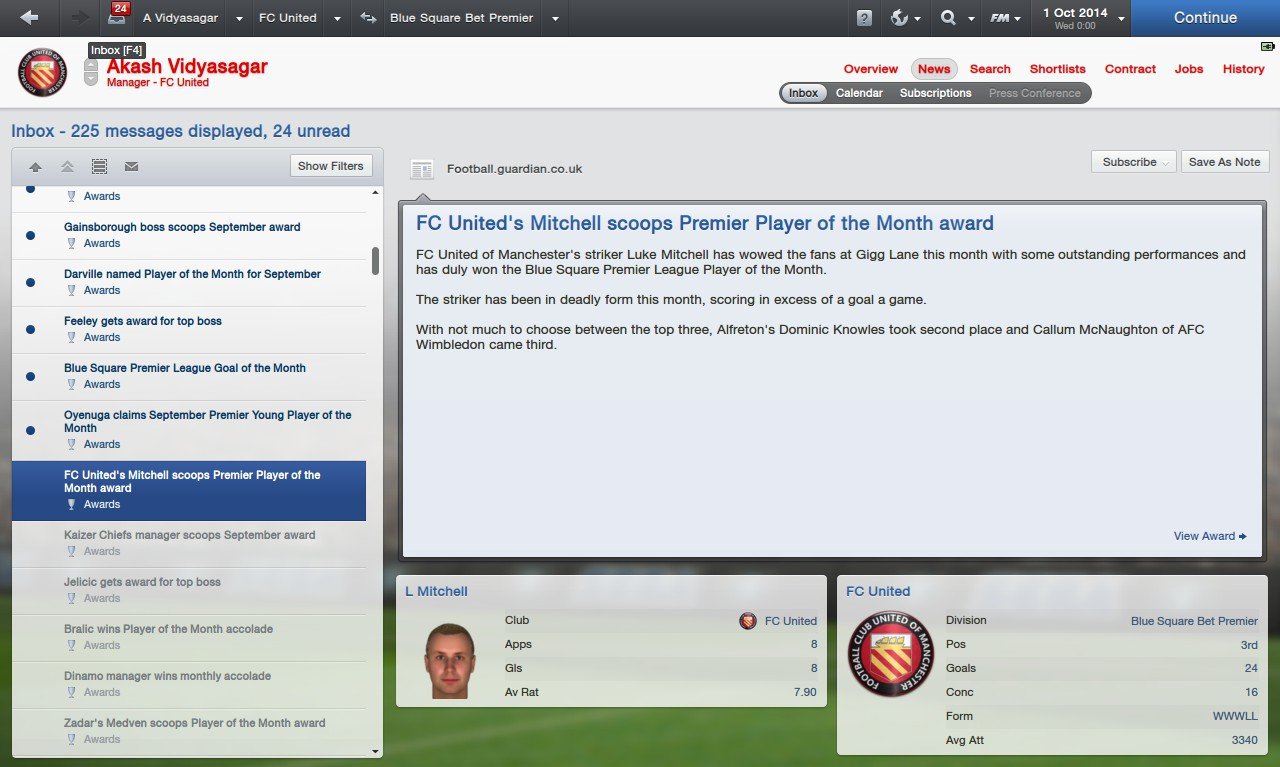 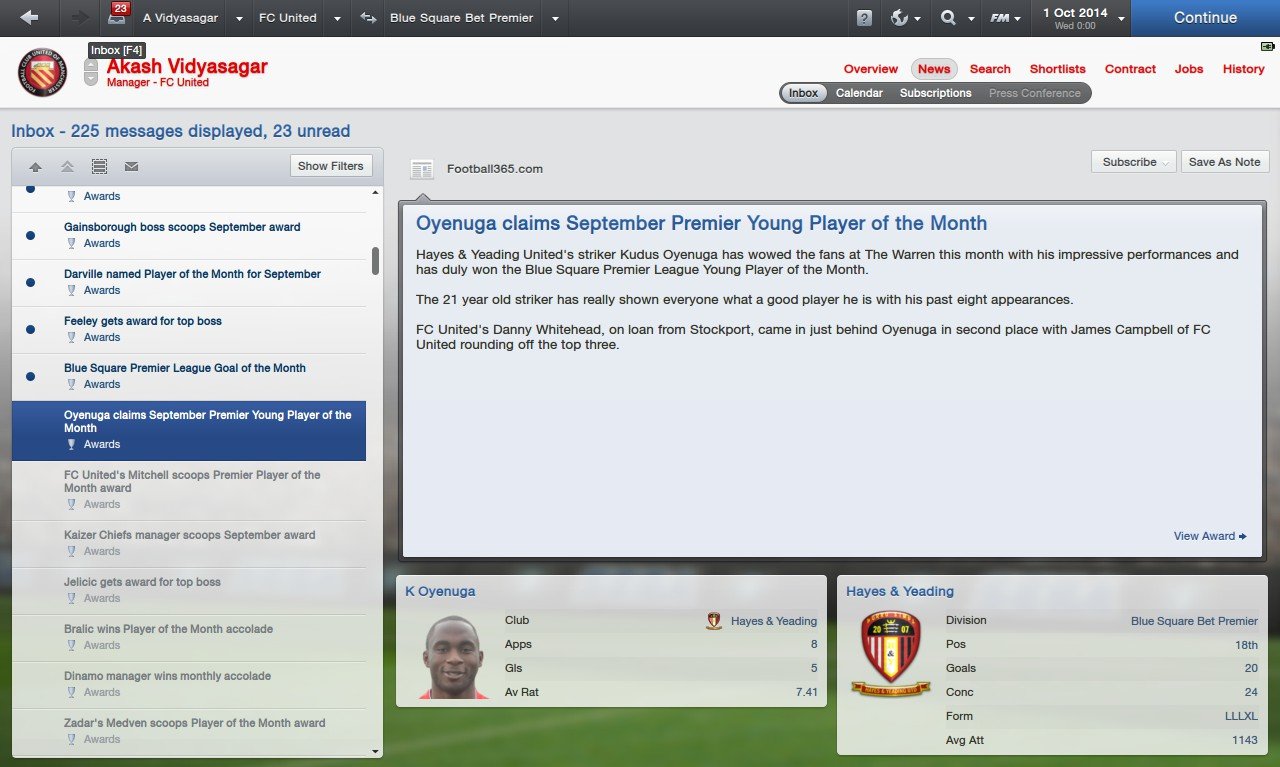 or.dabool
10 years
The super story is back! Good luck Akash

Kiwi
10 years
Hey Akash, it's great that you were able to retrieve this story!!
Login to Quote


you wont regret it just be sure to check Rodolfo Zelaya he plays for Allianza in El Salvador, good luck it will be a lot better save once you reach npower league 2 and turn professional.
Login to Quote

Blue
10 years
Weehee, Akash is carrying this on!
Login to Quote