Blue
10 years • Edited
This story will be continued even if I get my Newcastle save back, don't worry or get mad.

I've chosen to do it with Man City because of my inability to go anywhere below the Championship, but also because they are my team. Everyone else is allowed to do it with their team, so for once I'm choosing a big club. I have always had success with City, and want to continue it onto FM13, and none of you have ever seen my succeed on Football Manager, so I am proving I can. Hopefully this will make you believe in me.

So, stay with me on this journey that will hopefully lead to world domination! 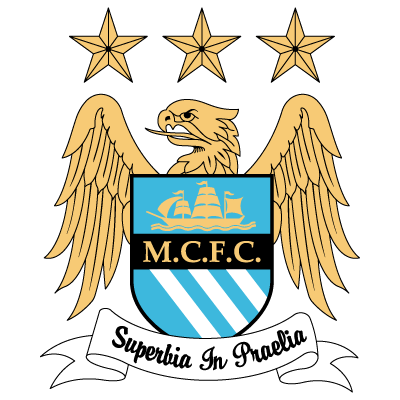 TheChosenOne
10 years
Woah. Stop. There's only room for one Manchester story around here.

Akash
10 years
You sound so annoyed at us in your opening couple of statements, blue. We believe in you!
Good luck

The FM Rookie
10 years
And don't forget, success doesn't make a story good. Emotion and passion does!
Login to Quote

Hopefully this will make you believe in me.:

I can assure you, Blue, that we all believe in you! go make the best story in the world

Chris_FM World
10 years
Goodluck ! And come on waiting... for your Preseason first update !!
Login to Quote

andrew98
10 years
Your team is bad, and you should feel bad, good luck with your story, looking forward to see how you go to the second division, nah just a jooookeee

Pre-Season Review
Overall, a good but not great pre-season. I switched tactics halfway through, and that worked. We made some very good signings as well. Hopefully the rest of the season will be a lot more successful.
Login to Quote

Arvind
10 years
What was your transfer budget? And a screenshot of Nastasic, please. And your tactic.
Login to Quote

Manchester City took part in the community shield, the traditional curtain raiser to the English season. It pitted reigning champions of the Premier League, Manchester City, against FA Cup winners, Chelsea. Chelsea were favourites for the clash, but City fans were still confident they could cause an upset. It would also give them a chance to see new manager Ben Warner, and the signings he made in action for the first time competitively.

Chelsea have also won it four times, the last only in 2009, and were runners-up in 2010, also to Manchester United.

This was billed as a close match, but also a way to decide who is favorites for this season’s Barclays Premier League crown. 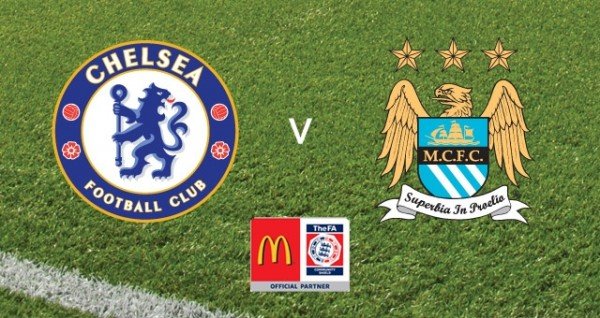 Manchester City started well, and were two goals up inside the first quarter of an hour. Aguero scored the first, as Manchester City caught Chelsea on the counter and Aguero placed a lob over Cech into the back of the net after twelve minutes to set City on their way. The second came minutes later via Chelsea keeper Petr Cech. He tipped Kolo Toure’s goal-bound header onto the post, but the ball rebounded back onto the back of his head, and rolled into the net. City couldn’t score again before half-time, but were in a very healthy position.

They put the game out of sight just after half time, Aguero rounding the keeper and slotting home his second after a good ball by Tevez. Chelsea did get a goal back with twenty minutes left, Mata smashing a shot in from about 12 yards via the post, but City responded with a fourth goal, substitute Edin Dzeko netting his first of the season with a simple close range header.

New Manchester City boss Ben Warner is delighted that his first Manchester City trophy has come so early in his career, and with such a good victory over another title contender. 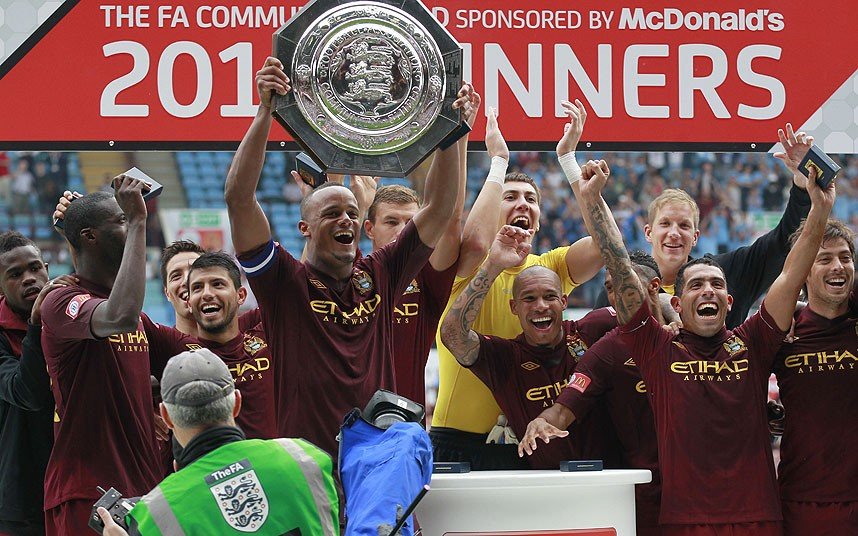 Blue
10 years
For Arvind
Transfer Budget
I agreed with the board that my target was to win the league, so they gave me £46.5 million. 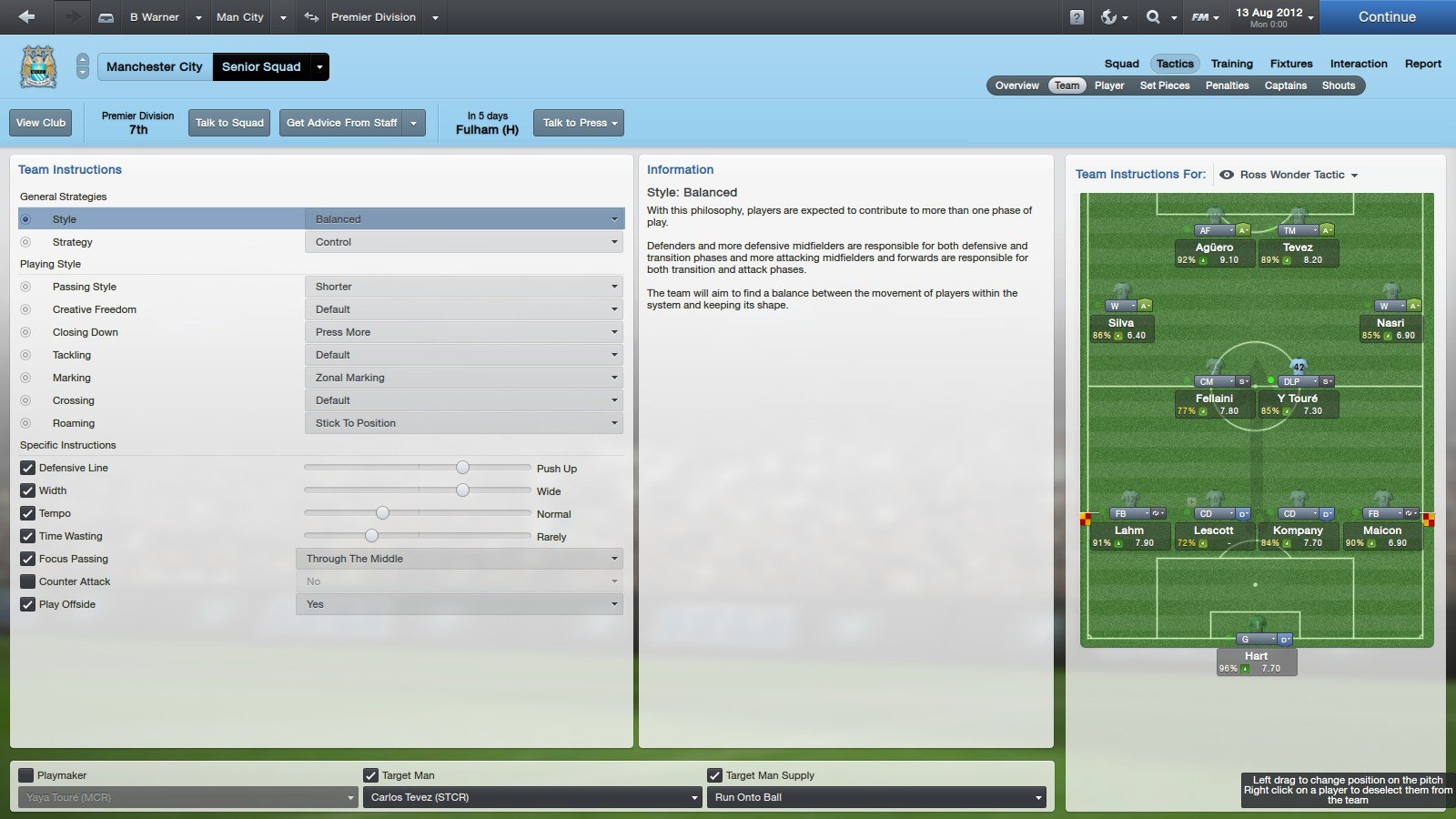 This is my first choice tactic (above). 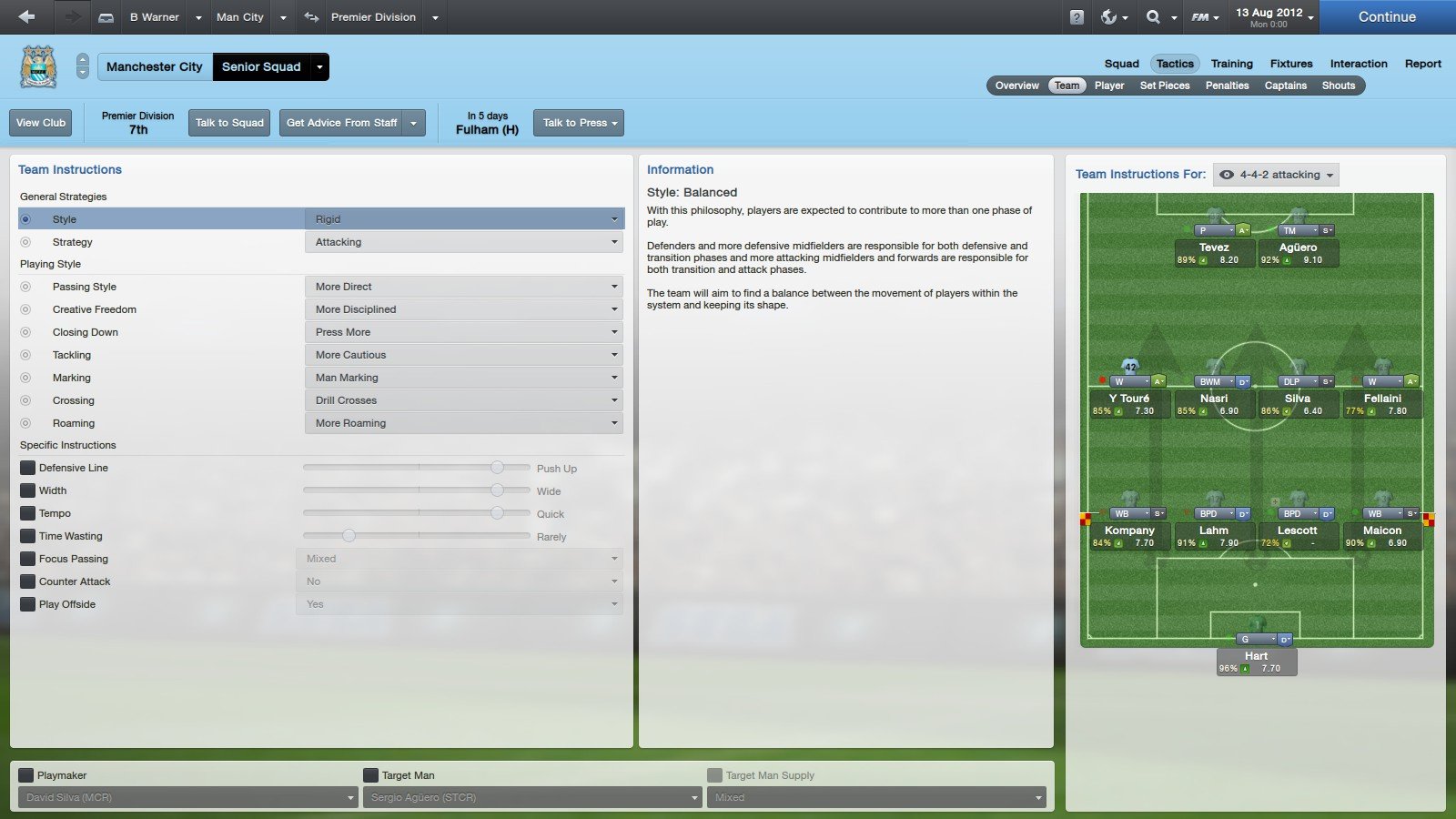 This is my other tactic, an attacking version of the basic 4-4-2. 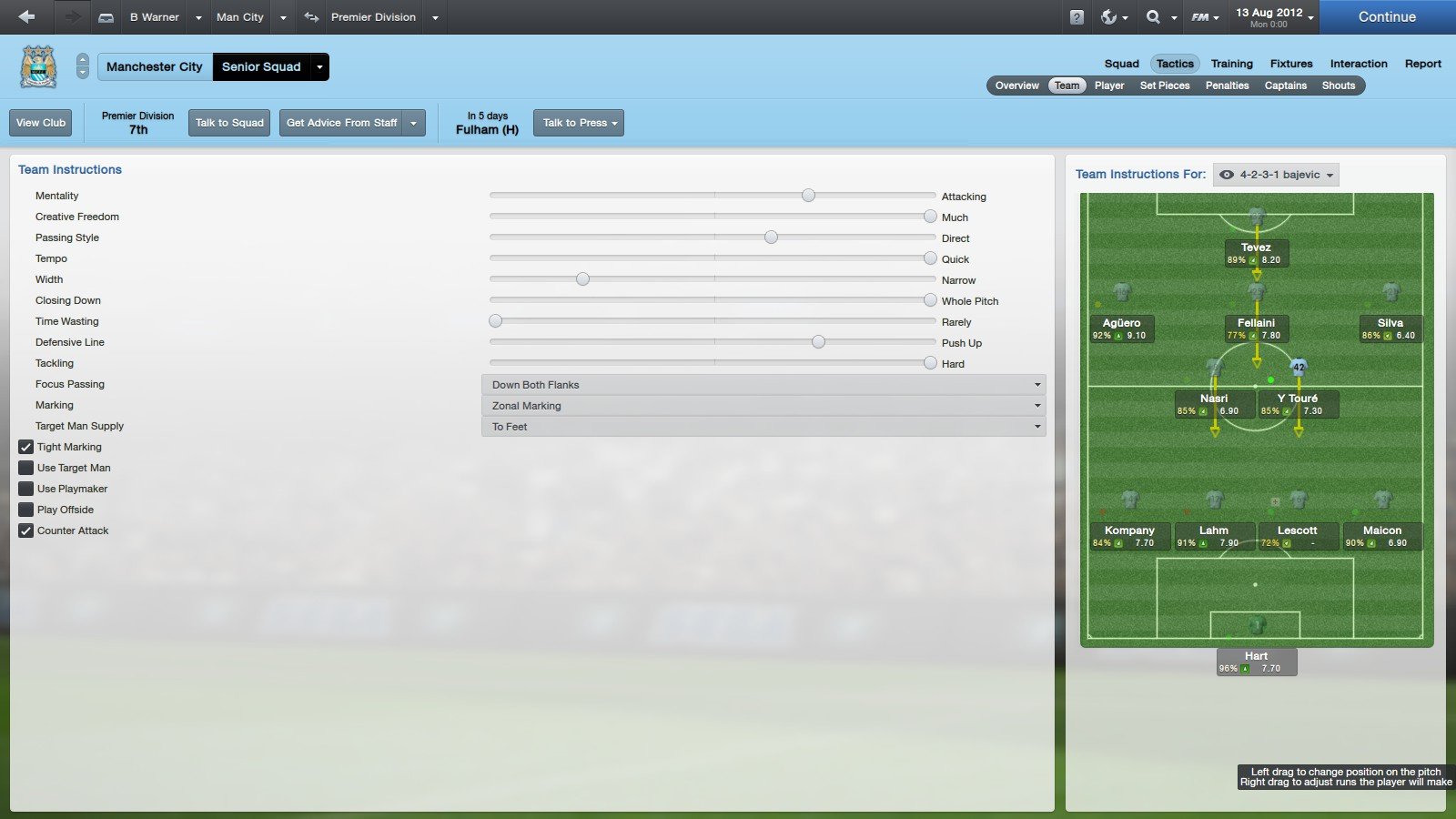 This is my third-choice tactic, the one I stopped using after my loss to Independiente in pre-season. 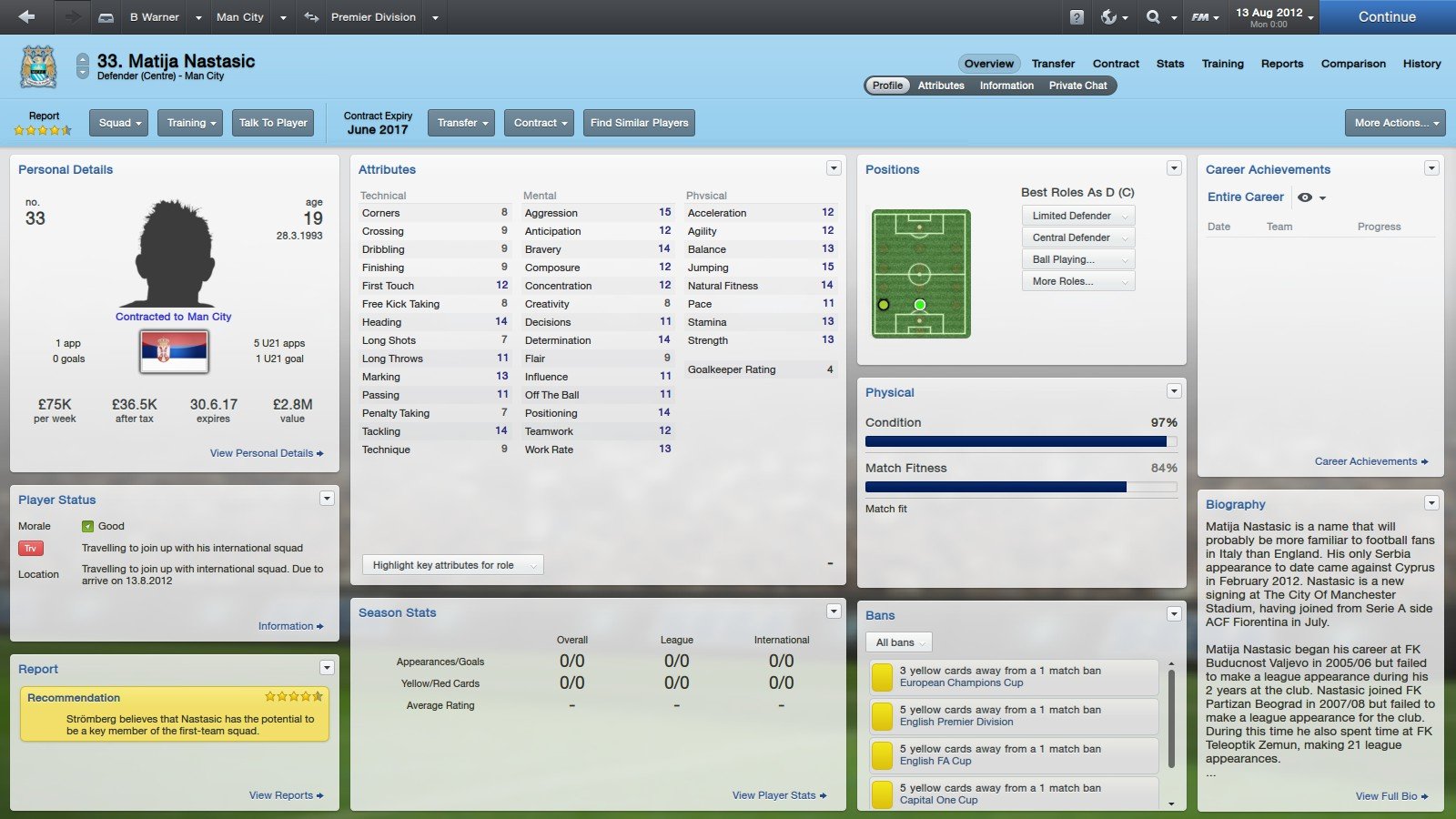 As you can see, great potential there.
Login to Quote

We faced Fulham in the first match of the Premier League season, able to field an almost full-strength side. Lescott was still missing, but didn’t prove too much of a miss, as we cruised to a 3-0 win. Another masterful performance from Aguero got him the Man of the Match award, and he added another two goals to take his tally for the season to four. If this display is anything to go by, we are in for a good season, hopefully.

Norwich were in high spirits after a shock 2-1 win at Stamford Bridge on the opening day, but were shot down by my City side as we put 5 past them at Carrow Road. I was boosted by the return of Lescott, although Aguero will miss a couple of weeks due to a pulled hamstring he suffered, although it didn’t stop him scoring his fifth and sixth goals of the season in another man of the match performance. If we keep playing well, who knows what might happen.

Cup Update
Manchester City have been drawn into Group H of the Champions’ League group stages alongside Barcelona, Basel and Feyenoord. 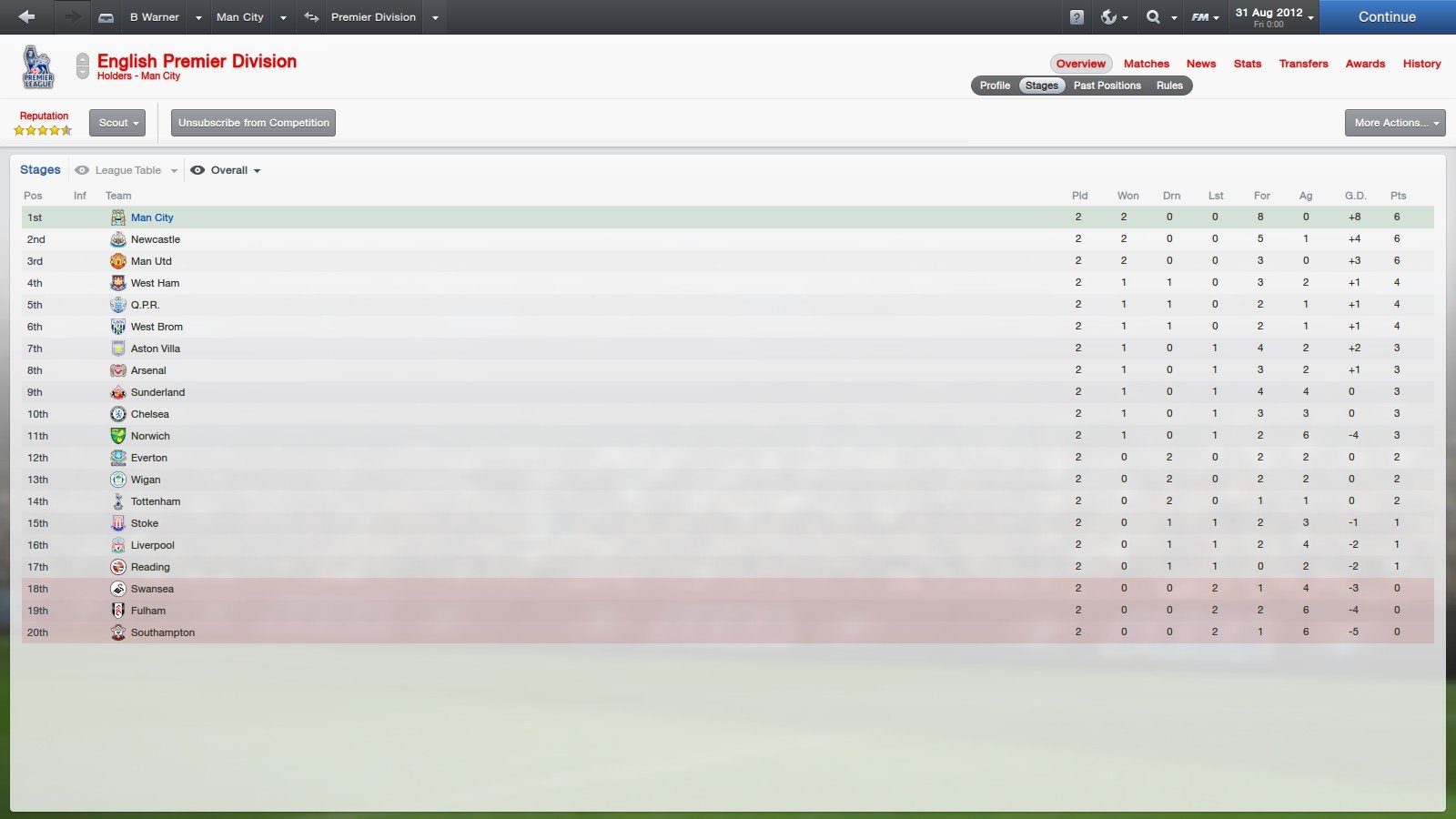 ejay
10 years
looking very good with Aguero and Tevez lookinng like the ones bagging more consistent. Hope Nastasic evolves for you and becomes a first team player.
Login to Quote