LAMBERT HANDS IN RESIGNATION AFTER 4 DAYS AT VILLA HELM

The Sun reports that Paul Lambert has resigned from his post at Aston Villa after just 4 days in charge.

In a statement Lambert states that when offered the job, Villa chairman Randy Lerner promised the Scot £10m to rejuvenate the squad but upon arrival at Bodymoor Heath, the American owner broke the news that it was strictly sell before you buy.

After interviewing the likes of Ruud Gullit, Rafa Benitez and Harry Redknapp to no success, and exasperated Lerner begins to lose patience.
Login to Quote

A Villa fan from birth, Connolly was a former player with local Irish league Ballymena United, Larne and Killymoon Rangers. He also represented Northern Ireland in the prestigious Milk Cup, playing against the likes of Nani, Miguel Veloso and Daniel Sturridge.

Connolly won player of the tournament and signed terms with Scottish side Falkirk. He made a handful of youth appearances before impressing enough to earn a call up to the first team for a Scottish Cup game at Celtic Park. Connolly came off the bench with Falkirk 2-1 down and rattled the crossbar with 20 minutes to go. Sadly, this was to be his only professional appearance as 5 minutes from time, a robust challenge, ironically from Paul Lambert, left the youngster with damaged knee ligaments.

After 2 and a half years out, Connolly made a return to playing with local team Rasharkin United, scoring 33 goals in 37 games as the club won their first league title.

His efforts were noticed and Lerner opted for passion and enthuisasm ahead of experience and appointed Connolly on a 1 year deal.

This is his story....
Login to Quote

jason_connolly1987
10 years • Edited
In his first week, Connolly went to work re-shuffling his backroom setup, negotiating to bring in a youthful staff with international playing experience.

Overseeing his first training session, Connolly notes some talented but inexperienced youngsters, alongside some deadwood on hefty wages.

Connolly personally flies to Russia to speak to the player and a deal is done with the playmaker due to arrive in January. 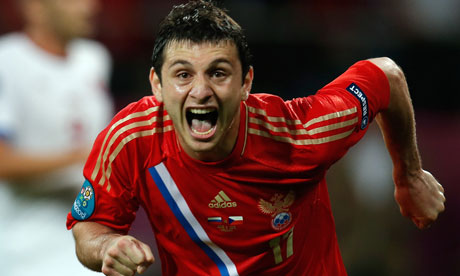 After a long day, Connolly slips in to something more comfortable and sips a hearty Russian vodka in his hotel room before retiring for the evening.
Login to Quote

jason_connolly1987
10 years • Edited
£11m is re-couped in transfer fees as the transfer listed players move on to pastures new.

With a budget now sitting pretty at £19m, Connolly quickly moves to bring in playing re-enforcements. First on the shopping list is 16 year old striker Mason Bennett from Derby County and Luke Shaw dubbed, "the new Ashley Cole" from Southampton.

In a couple of transfers that really capture the fans' imagination, Spanish international Raul Albiol and Kenyan, Victor Wanyama join from Real Madrid and Celtic respectively.

With the squad due to fly to America for a pre-season tour, Connolly calls up youth team players, Jack Grealish, Joshua Webb and Jordan Graham to integrate them to the first team squad.
Login to Quote

Villa arrive in the grand old U.S of A behind schedule due to Director of Football, Cantona taking exception to a heckler in Wetherspoons at Birmingham Airport.

The fan brands the Frenchman an 'arrogant French frog' and an irate Cantona duly sends him flying through two pints of Carlsberg and a table in one swift movement.

Anyone would think he'd done this before..... 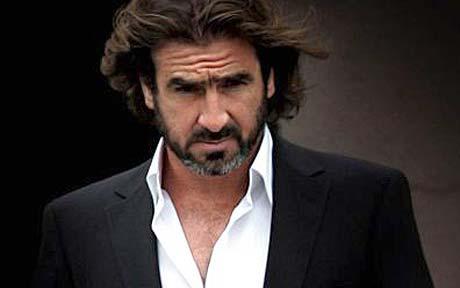 The Frenchman is held in airport security for 3 hours before finally being released and allowed to board the BMI flight to Houston.
Login to Quote

After the unexpected delay, Connolly and his charges finally arrive in The States and stay at a plush hotel owned by chairman, Randy Lerner.

Scottish full back Alan Hutton, clearly not used to such luxurious surroundings, loses a layer of skin in an accident involving a trouser press.

Back to more pressing matters and Connolly uses the American Dream to rotate his squad to get a look at all players, contstantly tinkering and mixing youth and experience.

The squad play 5 games in America, running out victorious 3 times and scoring 12 goals in the process.

The standout perfomer is young Mason Bennett, earning plaudits from fans and team mates alike by bagging 5 goals in 3 games.

The squad return to England in good spirits a fortnight ahead of their first league game with newly promoted Southampton.

The same however, cannot be said for two fans arrested in Portland.

The men are held in police custody after beating up a 'working girl' and leaving her for dead. They steal cash from her battered body, claiming they need money for a flight home.

Maintaining innocence, the men say they believed this to be the norm in Portland as it had been the setting for their favourite video game as youths. And it's not like they stole a vehicle....
Login to Quote

Villa kick off the season at St Mary's and after a drab 75 minutes, the game springs in to life... Former Villa midfielder, Steven Davis drills Saints in to a 1-0 lead following a through ball from captain Adam Lallana.

Charles N'Zogbia beats two men on the right, cuts in and drops a cracking cross on the noggin of Benteke, who equalizes from inside the 6 yard box.

In other news, Villa are drawn away to Barnet in the second round of the Capital One Cup.

Villa take a two goal lead inside half an hour in their first home game of the season thanks to a header from Ron Vlaar and a Christian Benteke volley. Ryan Shawcross pulls one back before the break following a deep cross from Matthew Etherington. Villa hold firm until the 87th minute, when another old boy scores. Palacios whips in a free kick and Peter Crouch rises above Ciaran Clark to equalize.

CAPITAL ONE CUP ROUND 2

Connolly rests some key players for the trip to Barnet and take the lead through Nathan Baker's header from an N'Zogbia corner. The lead is doubled before the break when Ait Fana's cross is deflected in off a Barnet defender. The home side pull one back 4 minutes from time to set up a nervy final but a lacklustre Villa hold firm and advance to round 3.

In other news, Villa are drawn at home to much more familiar opposition in the shape of Manchester United in the 3rd Round of the Capital One Cup while Christian Betenke's performances earn him early recognition.

Atreidas
10 years
Not a bad start, Unbeaten so far in competitive games isn't bad, Friendlies were not to shabby either, good luck.
1
Login to Quote

jason_connolly1987
10 years
Cheers mate, have loads more to put on after work!
Login to Quote

Anyone at the club knocking about the first team you think may do well? like Andi Weimann etc?
1
Login to Quote

Anyone at the club knocking about the first team you think may do well? like Andi Weimann etc?

Shaw doing well out at Doncaster on loan and Bennett is banging the goals in for the U18's at the minute! Weimann hasn't had much of a chance yet but Ciaran Clark, Nathan Baker and Matt Lowton are all looking good. Benteke is going good too, more posts to follow!

jason_connolly1987
10 years
BACK TO LEAGUE ACTION

A trip to Craven Cottage was next and after taking the lead through Darren Bent early on, Villa throw away the lead for the second successive league game as Brede Hangleand pops up with a header on the hour.

Reading are the visitors to Villa Park next and Villa go 2-0 up early doors thanks to goals from Darren Bent and Ron Vlaar. Karim Ait Fana scores a cracking third on 64 minutes to make the game safe. Pavel Pogrebnyak's header on 84 seems nothing more than a consolation.... Until Adam Le Fondre makes it 3-2 on 88. Surely it could not happen... This is the first win. Surely?

Villa's back line hold firm to claim their first 3 points of the season and move up to 9th place after 4 games. 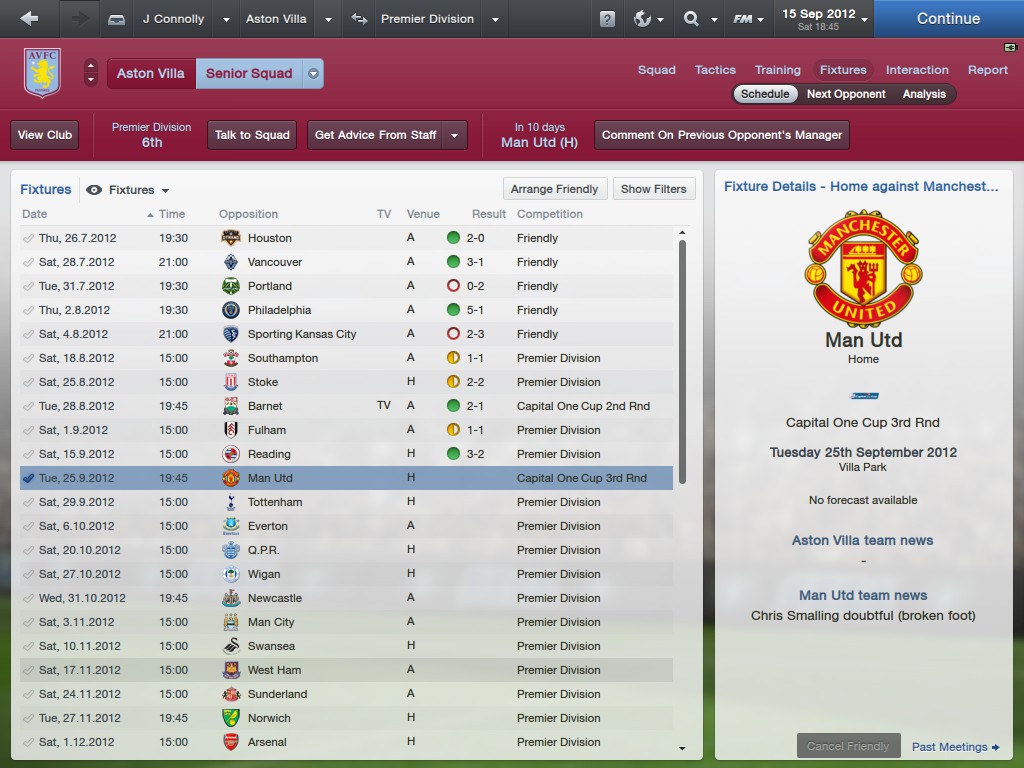 Next up it's United in the cup....
Login to Quote

jason_connolly1987
10 years
"I don't see Villa causing United any problems, even if they do field some of the youngsters." says a typically biased Gary Neville.

Connolly goes for a strong lineup to face United but so does Sir Alex.

A late injury to Victor Wanyama forces Fabien Delph in to midfield alongside Karim El Ahmadi. 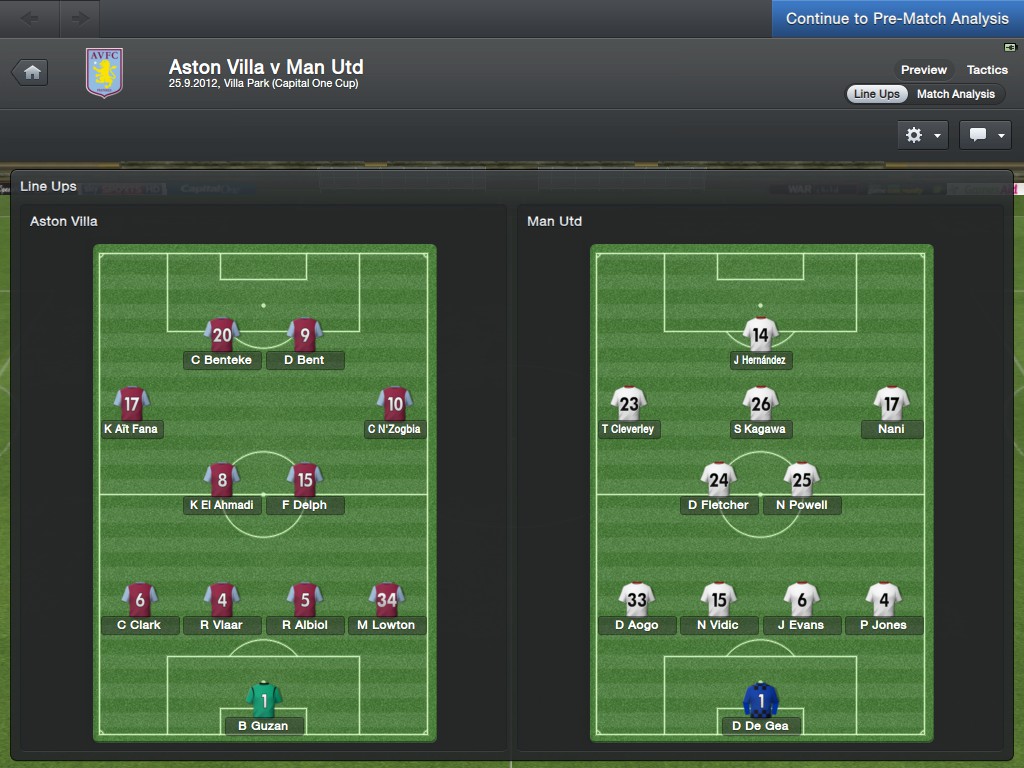 Villa go behind on 16 thanks to a sublime Nani free-kick.

Villa don't back down and dictate pace before El Ahmadi feeds Bent, who lays of N'Zogbia to curl home an equalizer.

A corner from N'Zogbia is nodded home by Vlaar and Villa lead 2-1 at the break.

Connolly, clearly guarding against any complacency, sends his team out with fire in the belly and just 4 minutes after the re-start, Darren Bent heads home an Ait Fana cross for 3-1.

Villa continue to go for the jugular and Benteke bursts in to the box where he is hauled down by Vidic. Bent steps up and Villa Park erupts, 4-1 to the home side with just over an hour played.

Villa slow the game way down but a momentary lapse from Lowton allows Darren Fletcher to make it 4-2.

With time ticking away, Welbeck makes it 4-3 in the 92nd minute but Villa hold on to advance to the next round.

"It was never a penalty!" Rages Ferguson, who spits his chewing gum in the face of Sky's Guy Mowbray in frustration. Fergie later claims it was an accident and blames Mowbray for the incident. The FA agree and decide not to charge Ferguson as the Sky correspondent shouldn't have asked such a silly question in the first place.

"To be honest, 4-3 flattered them, we battered them all over the park and it could easily have been 7." Retorts the Villa boss.
Login to Quote

jason_connolly1987
10 years
BACK TO THE LEAGUE

Villa are back on league duty next at home to Spurs in front of the Sky Cameras. An exciting game astonishingly ends 0-0 with a point a fair result.

Villa travel to Goodison Park next and are 2-0 to the good at the break thanks to goals from Christian Benteke and Ait Fana. The team surrender a 2 goal lead for the second time this season following a brace from Belgian, Kevin Mirallas.

In other news, Villa are drawn at home to Norwich in the Capital One Cup 4th Round.
Login to Quote

"Villa's youngsters are showing their inexperience, killing off games has been a problem. Dropping points in 3 games out of 4 after being in front is appalling" says Glenn Hoddle.

Connolly's boys ran out 3-1 winners at home to QPR and Wigan in successive games. The highlight being a Darren Bent hat trick against The Latics.

This is followed up with a 2-0 win over Norwich, which sends Villa in to the Quarter Finals of the Capital One Cup. 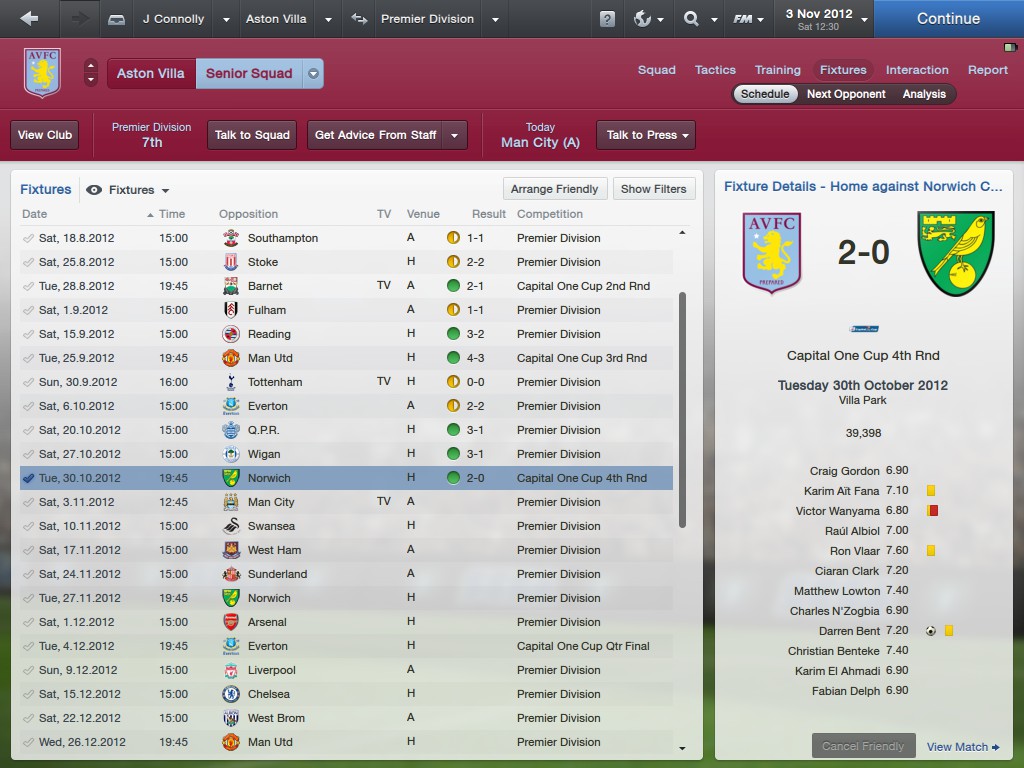 More recognition for Benteke as he receives his 2nd young player of the month award. 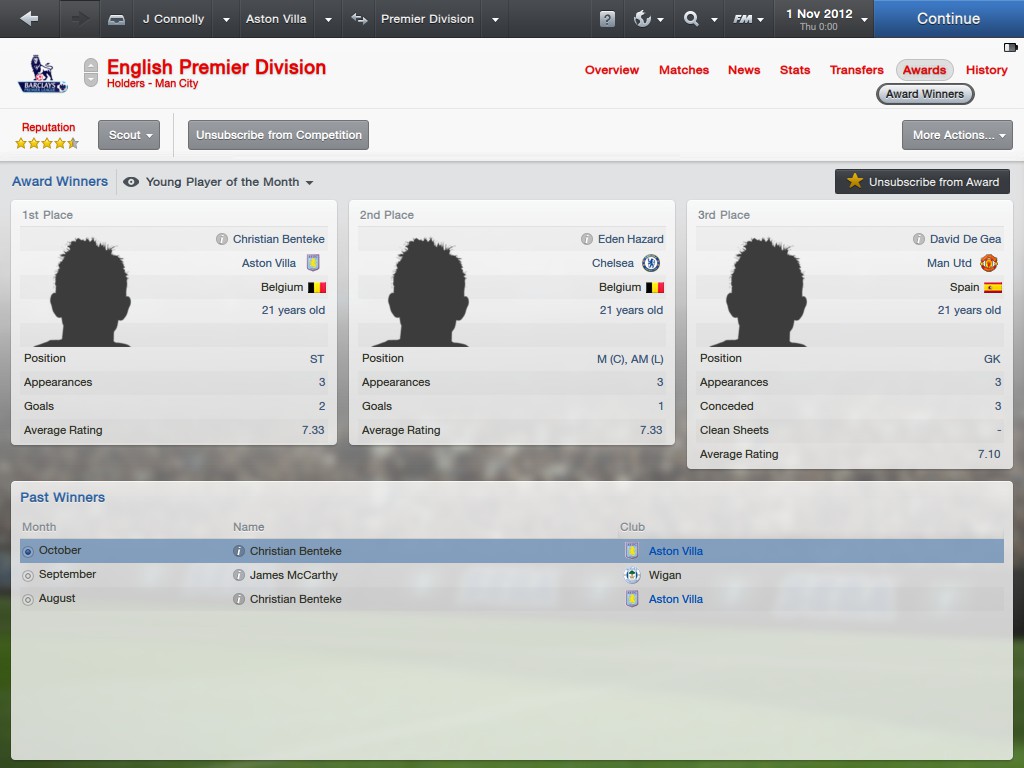 After 8 games, Villa are the only unbeaten side in the league and sit 7th with 14 points and 15 goals scored. 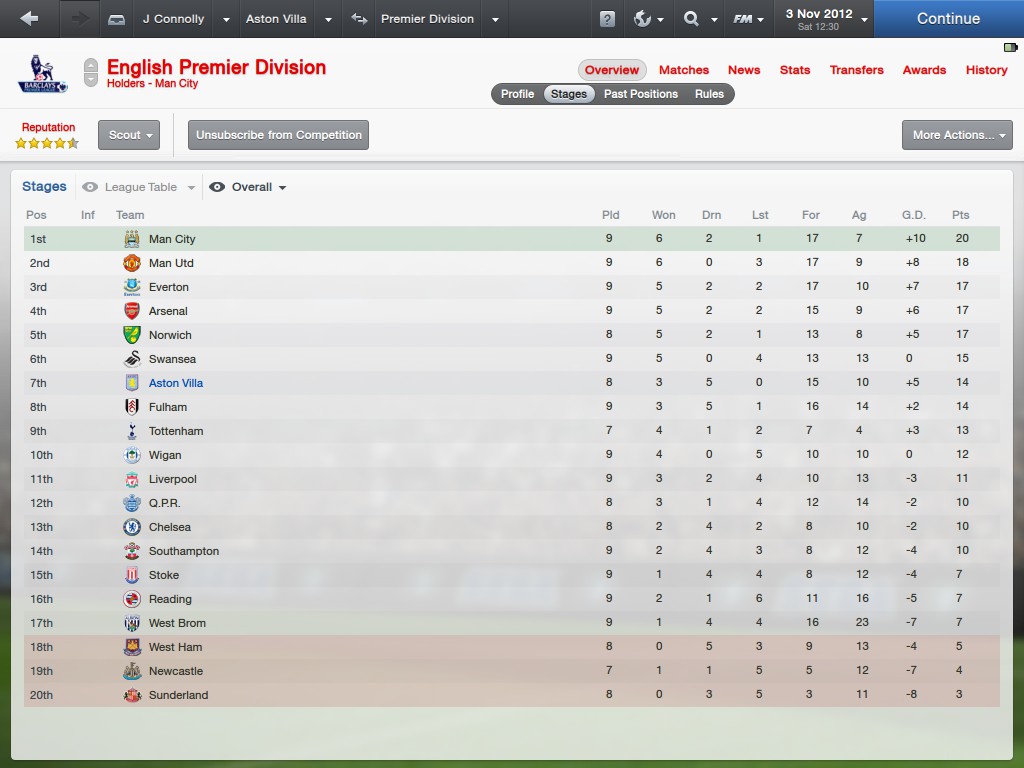 In other news, Villa are drawn at home to Everton in the Cup Quarter Final.
Login to Quote