Hello, everyone. First off, I want to thank you for reading.

Secondly, here is my 'introduction' to the story of sorts. If you have been reading my old story: 'The Redknapp Revolution', you would know it has been pretty successful (I'm not boasting, or am I?) and I was having a really enjoyable time with it. Then, the crash happened and all the stories were wiped out, thus I could not continue it. I then attempted to do Everton and Cardiff stories but I could not get into the swing of things. Mark's attempt to re-write his story inspired me to kickstart The Redknapp Revolution... once again.

For any new readers: My save will start in 2016, but I will briefly summarize everything that happened from 2012 to 2016.

Jamie Redknapp is back. 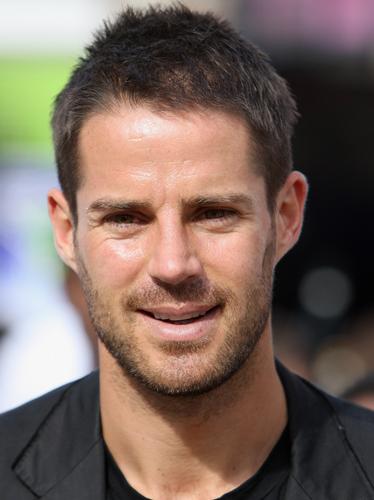 Kenny Dalglish was sacked after a terrible season when Liverpool finished 8th. After targets like Roberto Martinez and Rafa Benitez was ruled out for the job, former Liverpool captain Jamie Redknapp found himself approached by John Henry and Thomas Werner. He signed a contract, and was announced as the new Liverpool manager.

His first purchase as a manager and for Liverpool, was former player John Arne Riise. Stewart Downing and Danny Wilson went out the door to Fulham and Bolton respectively, with John Flanagan and Jack Robinson also going out on loan to Leeds and Burnley respectively for first-team experience in the Championship. Other notable loan transfers were Jonjo Shelvey to Queens Park Rangers, Dani Pacheco to Bolton, and Suso Fernandez to Stoke City.

Abel Hernandez and Wellington Nem were both then roped in to join the Anfield club, from Palermo and Fluminense for about 9 million in total. Jamie Redknapp then sold Jose Enrique and Peter Gulacsi to Tottenham, Doni also heading out the door to Manchester City. The money from these sales went to the purchase of Blackburn left-back Martin Olsson.

Olsson was unable to settle down in Merseyside six months later in January. Fellow summer signing Oussama Assaidi was also unable to make an impact, and both were sent to Newcastle in a player exchange deal for the Toon's Davide Santon. Olsson's deal was a loan and Assaidi's was a permanent one.

In total, Redknapp spent 25 million and sold 20 million worth of players in his first season at Liverpool. 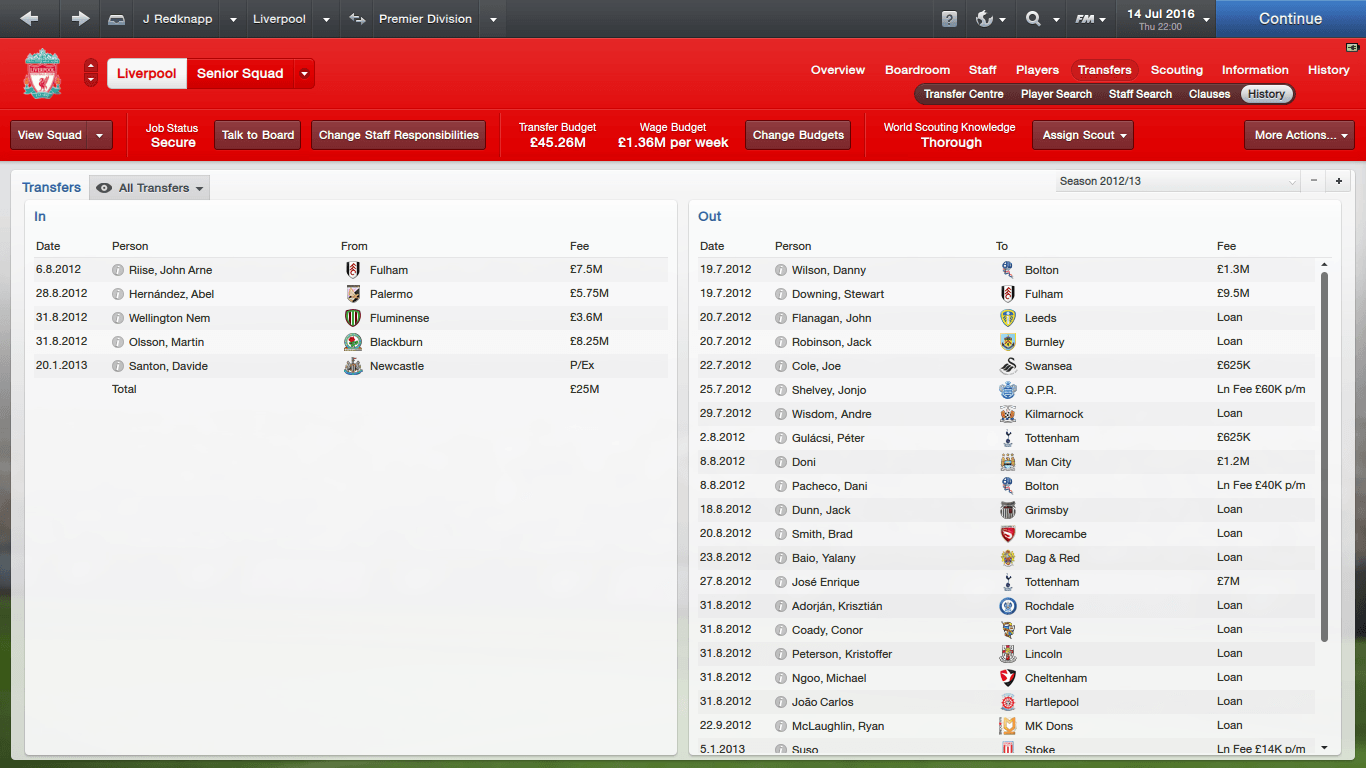 After a less-than-impressive season, Redknapp led Liverpool to 7th in the league, as well as retaining the League Cup, his first trophy as a manager. However, the owners chose to keep faith in Redknapp and offered the budding manager a new five-year contract. 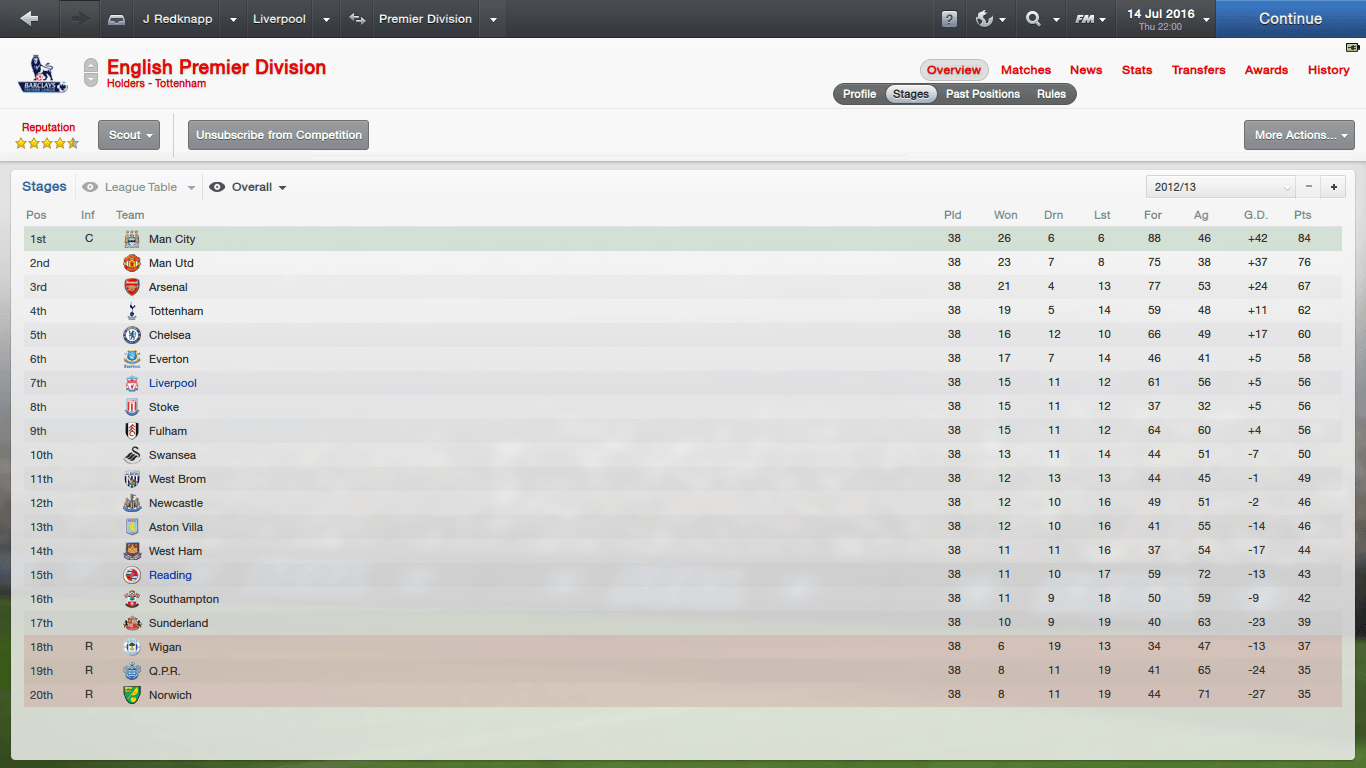 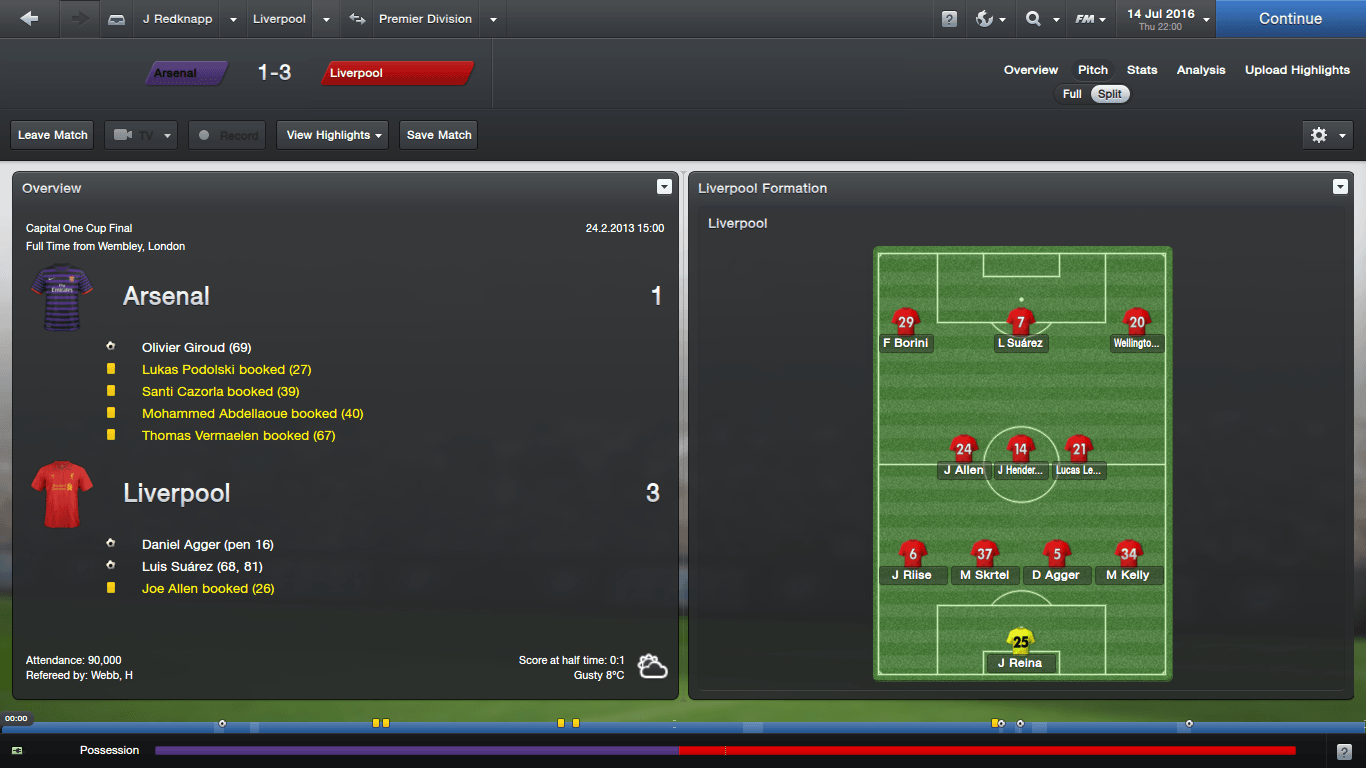 After a non-impressive debut season, Jamie Redknapp is determined to have a successful second season and hopefully, secure Champions' League football.

After a season with Liverpool, and only six months wearing the Red jersey, Martin Olsson departed for Stoke City. Dani Pacheco also leaves for Blackpool after returning from his loan spell at Bolton, and so does Jay Spearing, to Wolves.

Jonjo Shelvey leaves for Swansea after failing to find first-team chances at Anfield, and John Arne Riise goes to Aston Villa. Andy Carroll is farmed out on loan again, this time to Tottenham and Suso also goes on loan to Birmingham City.

17-year-old Spanish left-back Kike is brought in from a club in the Spain lower leagues, Sevilla Atletico, for a whooping fee of 6 million. Another youngster, 18-year-old German winger Martin Heythausen, comes in from Swiss club Grasshopper for just 160k. A bargain!

Brad Jones is released from the club and his replacement is young 17-year-old Portuguese keeper Sandro Moreira - hopefully a successor to Pepe Reina when he gets older.

Gareth Barry is brought in on loan from Manchester City after falling out of favour with Roberto Mancini, and 18-year-old Italian teenager Matteo Adamo is roped in from Roma. Nathan Redmond arrives from Birmingham City, while French keeper Emmanuel Royer and former Red man Yossi Benayoun joins from free transfers. The largest purchase of the window, however, is Fiorentina's Stevan Jovetic, who joins for 25 million.

Emmanuel Royer is released after only six months with Liverpool due to whines for first-team football. 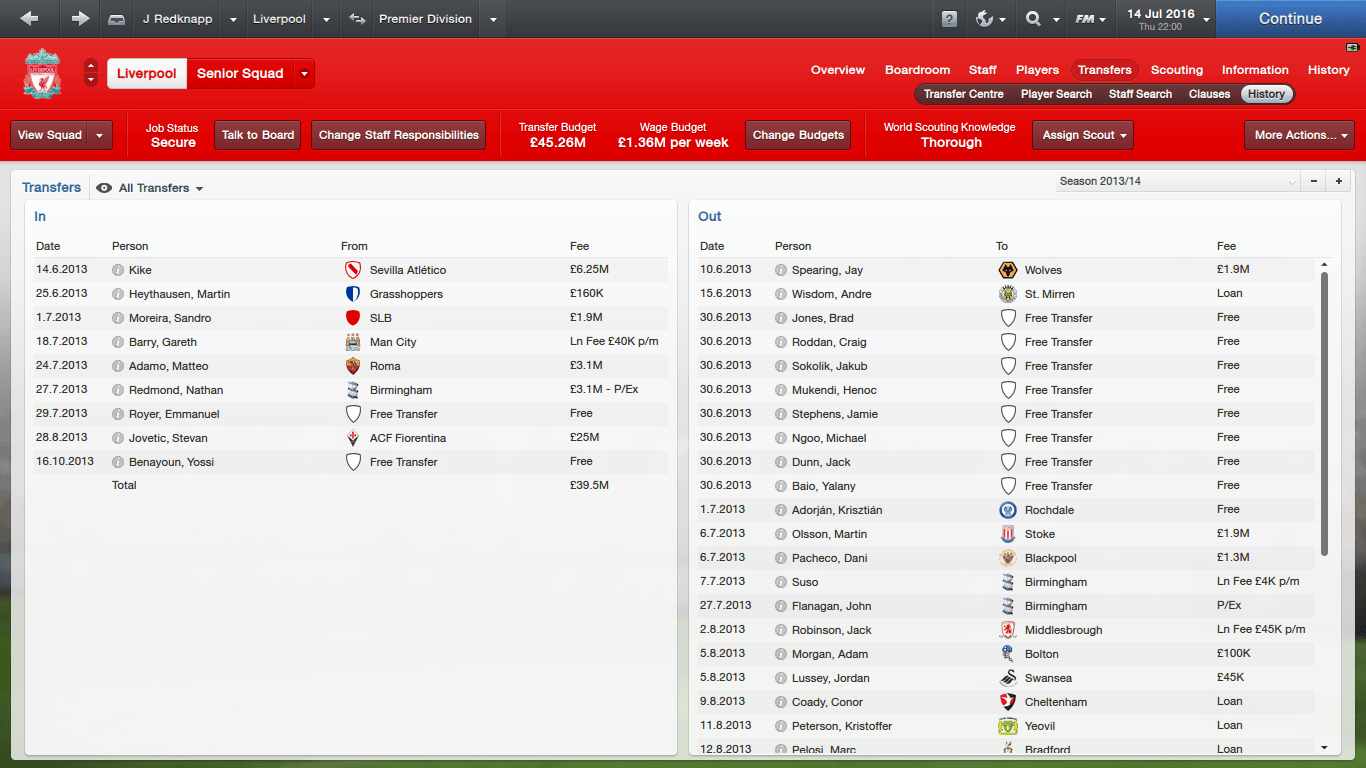 No one expected this, but Jamie Redknapp led Liverpool to their first Premier League title after a series of miraculous results. Brilliance. 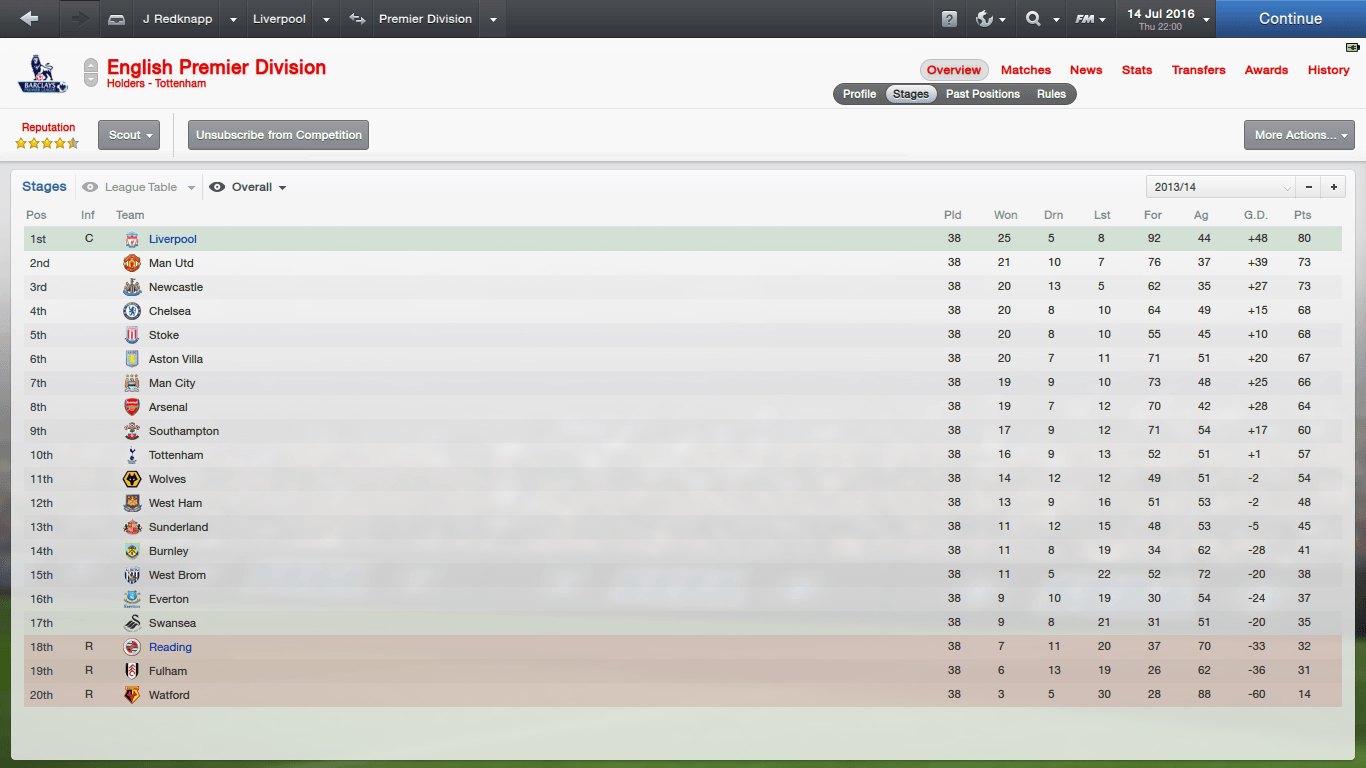 dragoblaze12
8 years
Great to see this is back, was one of my favorite stories.
1
Login to Quote

On the back of a successful season where Liverpool won the Premier League, Jamie Redknapp is hailed as one of the 'best managers ever in the history of Liverpool'. The Reds will be playing in the Champions' League this season. Jamie Carragher has also retired from professional football and Pepe Reina will take his place as the vice-captain of Liverpool.

It was a hectic transfer window for Liverpool this season as Jamie Redknapp seeked to improve the squad. Daniel Agger, Abel Hernandez, Jordan Henderson, and Joe Allen all departed to Wolves, Leverkusen, Southampton, and Tottenham respectively. Teenage winger Ertan Kalkan, who hails from Turkey, was brought in to strengthen the Reserve side from Galatasaray. Ashley Cole joined on a free transfer from Chelsea, and the midfield of Liverpool was especially strengthened as Denys Garmash, Pedro Obiang, Marco Verratti, and Felipe Anderson all arrived at Liverpool for a combined total of 46 million.

Keisuke Honda arrives from CSKA Moscow on a free transfer, while Marc Bartra is purchased for a mere fee of 4 million.

Last but not least, Andy Carroll chooses to make his stay at Tottenham permanent, as Spurs submit a 3 million offer to make the Gateshead-born striker's loan deal a permanent one. 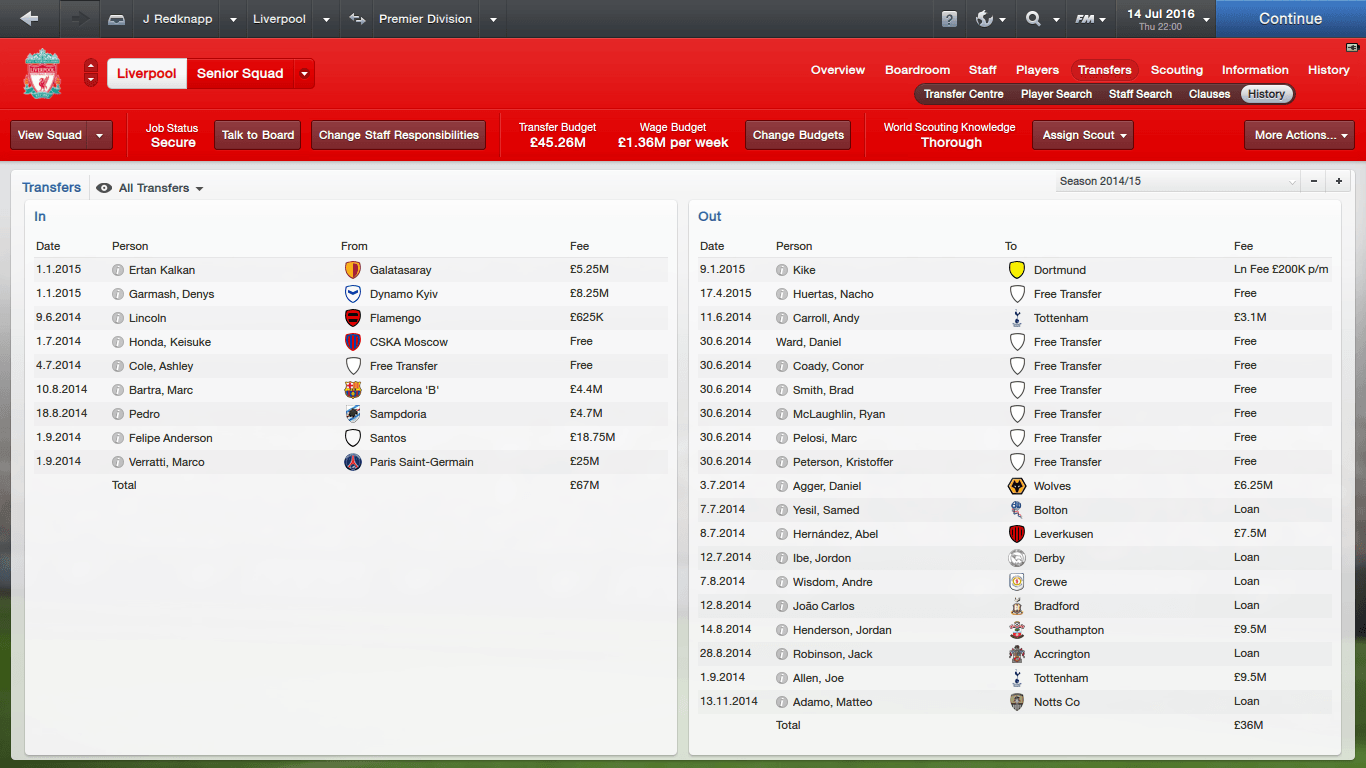 Liverpool win their first Community Shield since 2006, winning in the curtain-raiser against Manchester City at the start of the season. However, they fail miserably at trying to defend their title, and very disappointingly for everyone associated with the Merseyside club, Liverpool finish 6th. 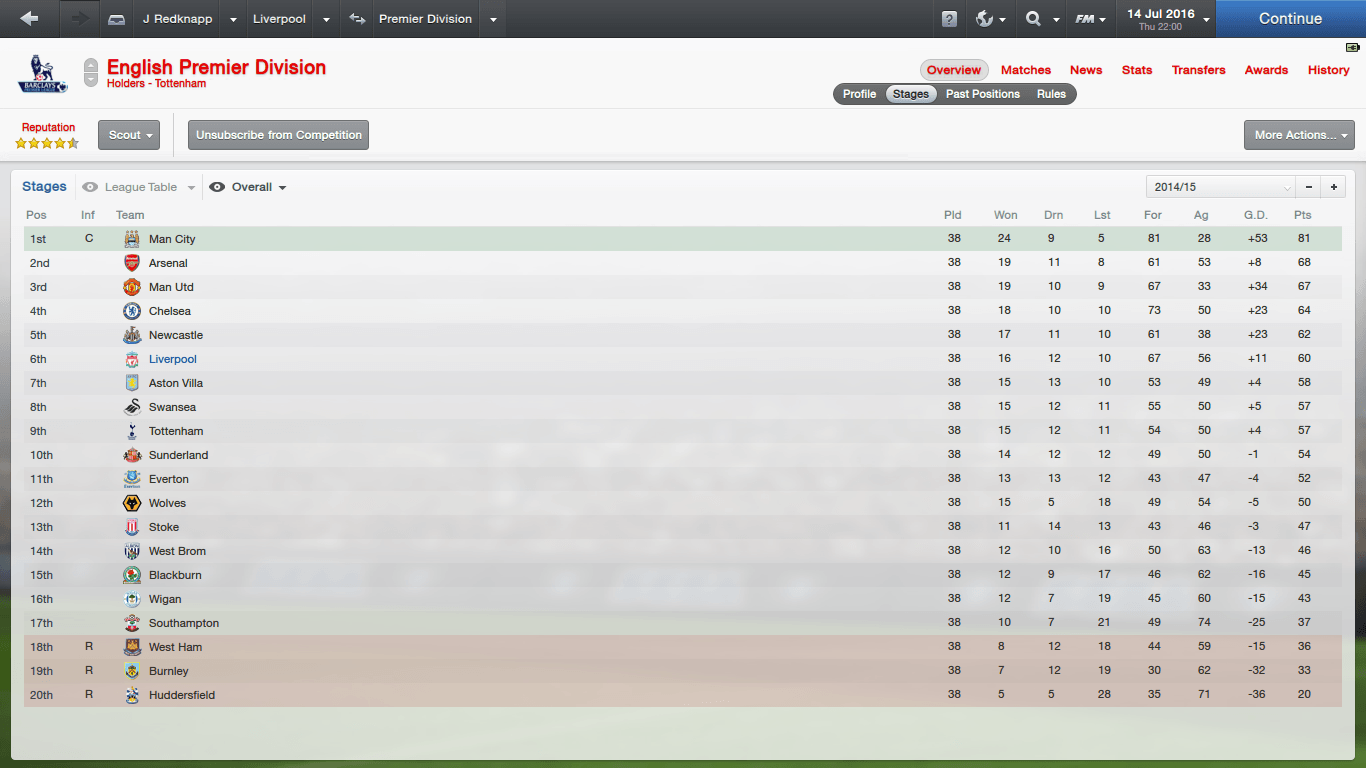 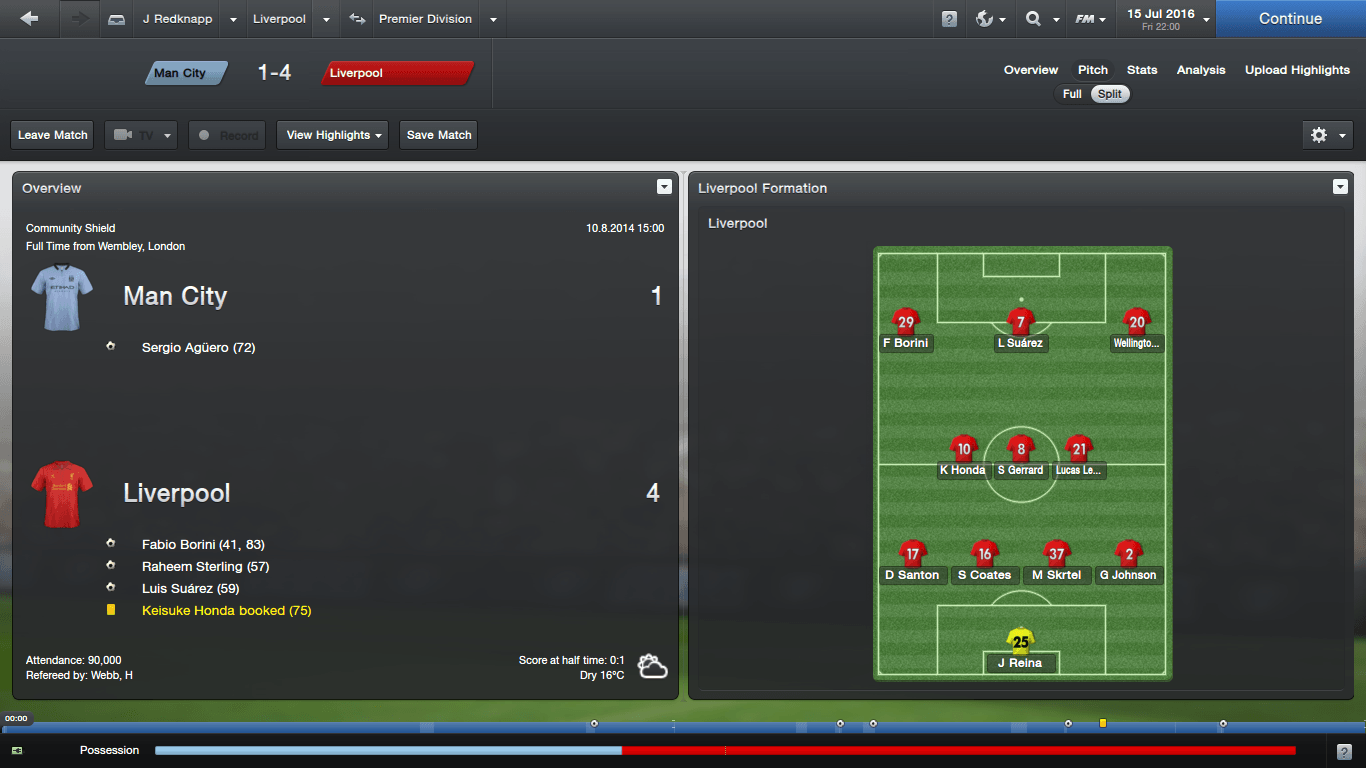 Jamie Redknapp's fourth year at Anfield as a manager sees Yossi Benayoun, Ashley Cole, and talisman Steven Gerrard retire. Gerrard is employed as Under-18s manager and Benayoun will serve as Under-18s assistant manager. The captaincy is passed down to prolific but injury-prone striker Stevan Jovetic, who has been showing a great deal of leadership. Reina remains vice-captain.

Transfers
Aside from promoting some youngsters to the first team, Jamie Redknapp did a whole lot in the transfer market. Last season's signings were on the move again as Keisuke Honda and Pedro Obiang were both shipped off. Glen Johnson and Martin Kelly also leave to be replaced by Sime Vrsaljko and former Red player Alvaro Arbeloa, who was released by Real Madrid.

A host of youngsters is brought into the side with Mickael Leonard, Luigi Nava, Amadeusz Kosowski, Martin Hartmann, and Jesper Jensen joining, with all these players being below the age of 19. 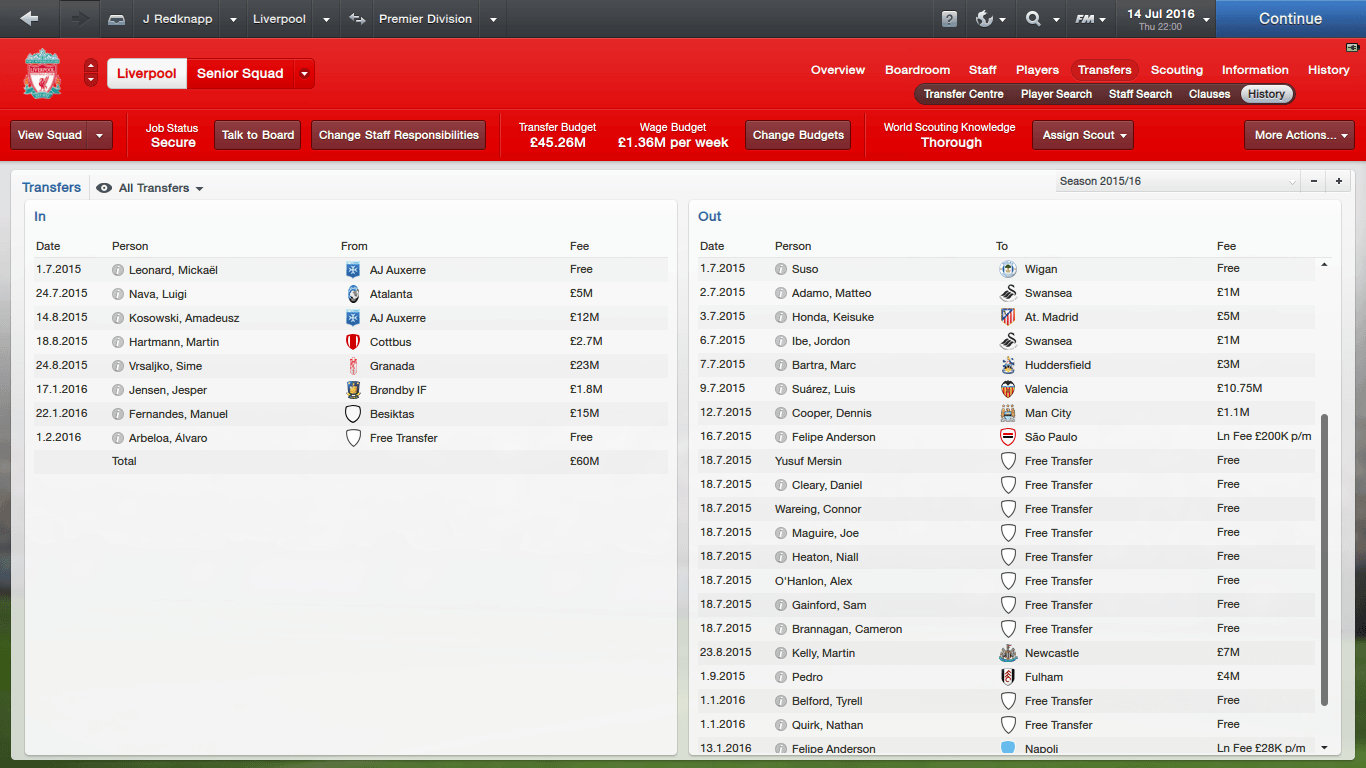 Another disappointing season in the Premier League for Liverpool, as Jamie Redknapp's side finish 7th. 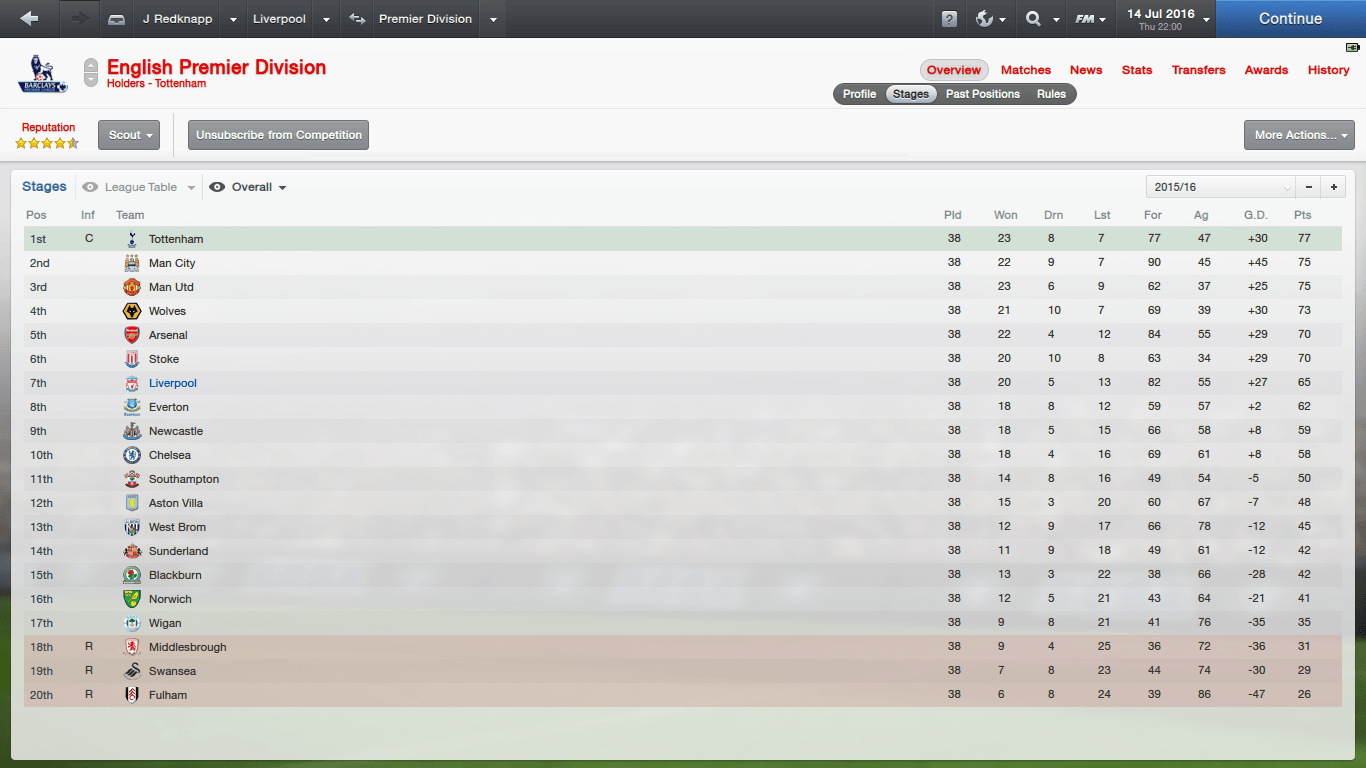 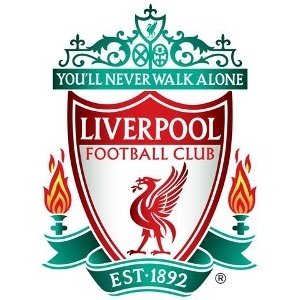 The board does not expect an immediate title challenge, but has set the bar at European qualification. After failure to secure European football last season, the board expects at least a 4th place finish.

Just 1 more day and then it's happy July. How time flew, I thought, as I walked into my office. Hm. I looked at the clock. 9 o'clock in the morning. I hated waking up any later than 10 o'clock, but my good old assistant manager Steve Round had told me Alvaro wanted to meet me today. I could guess what it was.

As I thought about the good sex last night (my wife still has it), there was a knock on the door, and Alvaro proceeded to enter.

"Hey there, Jamie," Alvaro took a seat in front of me. "I'm sure you know why I wanted to meet you. I want to know if I am still part of your plans at Liverpool. My contract is running out today, and if you don't offer me a new contract, I am going to leave."

"Well, Alvaro, it's like this," I said. "We are looking at getting in this particular right-back, so we don't think it would be suitable to have three first-team right-backs together in the squad. So.... yes, you have permission to find a new club."

"Alright Jamie. It has been a good time here, even if it's only been six months. Thanks for everything," Alvaro stood up and extended his hand. I gladly accepted it and we shook hands warmly. He was a true professional, but the squad didn't need him anymore.
Login to Quote

Andrea Poli was a nightmare for the opposition in the Chelsea midfield. The Italian joined Chelsea from Sampdoria, where he had also been putting in great performances, for a fee of 22 million last summer.

His brilliance was not enough to inspire Chelsea and they finished 10th. Poli is unhappy and has requested a move as he wants to sign for a club that finishes higher up the table. Liverpool finished 7th last season, but hey, it was still three spots above Chelsea, and besides, not many of the top teams seemed to be showing interest in him. We went in for the lad.

Steve Round and I made a trip up to London this morning to meet up with Poli and his agent, Filippo Mora, after John and Thomas had phoned Chelsea officials and negotiated a price of 23 million. A bit pricey, but worth it, or at least I think so.

Steve and I were ushered into Stamford Bridge, where we met Poli and Mora. The former looked excited, to say the least. Which was good, I guess.

"First, the wage," Mora got down to business, speaking in perfect English, albeit without a British accent. "Andrea wants at least 90,000 per week."

"That's too much," Steve remarked, and I nodded.

"Andrea earns more than 100,000 a week at Chelsea, Mr. Redknapp," Mora smiled. "My advice for him was to ask for 120,000 per week but Andrea was adamant to lower it for more negotiation flexibility. We are not going to bring it down any further."

"We are done here then," I said defiantly, getting up and ready to leave with Steve.

"Wait!" I heard a different voice call me back - this time the voice of the Italian midfielder sitting beside his agent. I grinned, and turned back.

"I am very keen on joining Liverpool," Poli insisted. "I am willing to settle for 85,000 per week. Does that sound good?"

"80,000 per week it is," Poli nodded. His agent didn't looked pleased, but gestured for us to come back to the table. We gladly did.

"We want a loyalty bonus of 2.5 million, and a 3 million agent fee," Mora made the first move.

"That's too much," Steve shook his head. Mora frowned at him.

"It's nice to see we're making some progress here," I grinned at the football agent, who returned a forced smile of his own. "For bonuses, we are offering an extra 2k of wages everytime Andrea here scores a goal. An appearance fee of 8.5k, and a 350k Team of the Year bonus. What do you say, Mr. Mora?"

Mora looked at Poli, and both of them nodded.

"A pleasure doing business with you, Mr. Mora."

As Steve and I walked away from Stamford Bridge, pleased with the fact that we had secured a new signing today, I got a phone call from Jim Leishman, our Director of Football.

"Hello, Jim," I answered the call.

"Boss, Manchester City say they are prepared to sell Kyle Walker for just 10 million. What do you say?"

"That's a right bargain there, Jim. I'm counting on you to open contract negotiations with him, then."

"No problem, boss."
Login to Quote

You are reading "The Redknapp Revolution: Once Again".