Chelsea midfielder Andrea Poli has made the move to join rivals Liverpool in a deal rumored to be around the fee of 23 million. 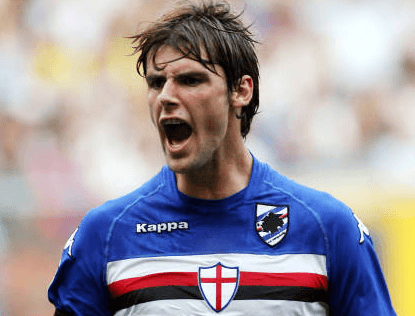 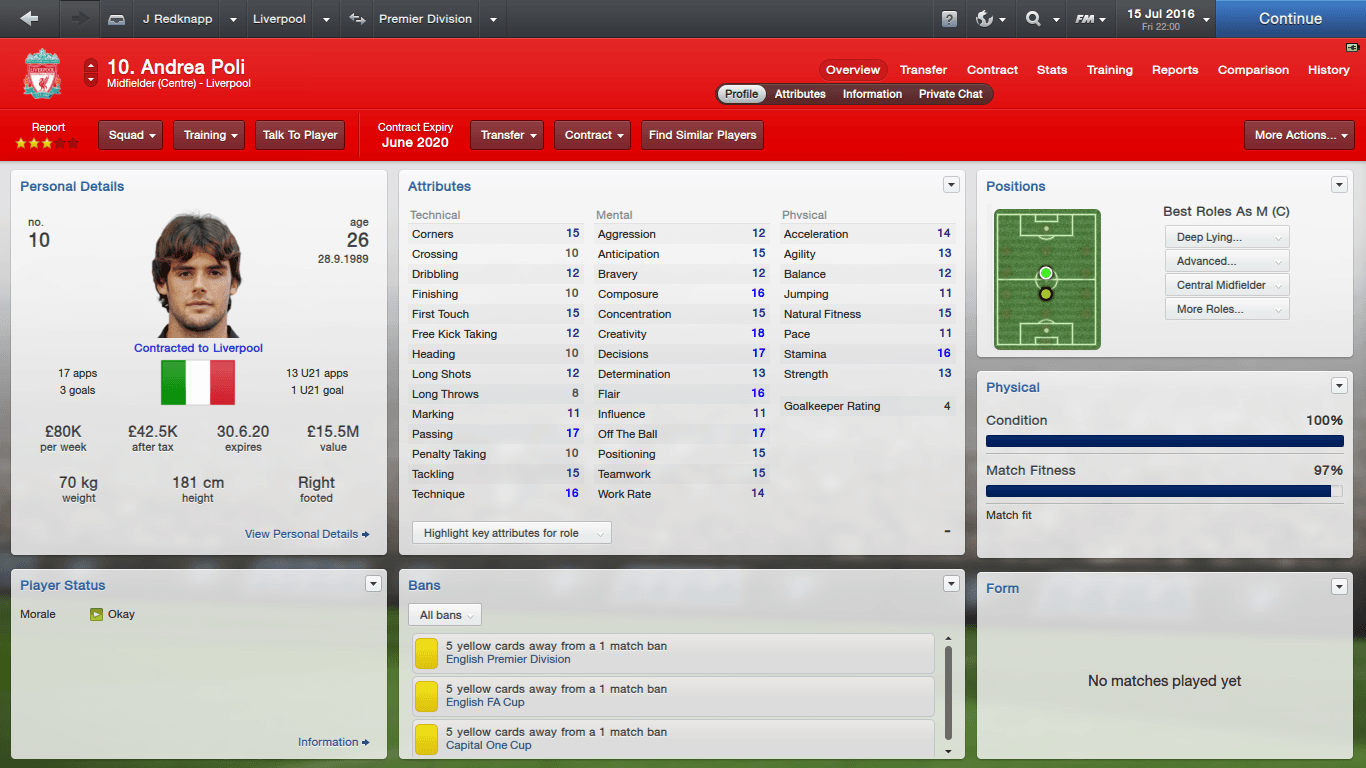 Poli, 26, had a spectacular debut season with Chelsea after making the move from Sampdoria to London last summer. However, his performances failed to inspire the team and the Blues finished 10th.

"Liverpool are a magnificent club and I want to help them challenge for honours and trophies," said Poli. "I have relatives that support Liverpool and I have been following them since I was a child as well so this was a major influence on my decision to sign for them."

Liverpool were actually very keen on Poli in January but the midfielder rejected a move away from London after only six months with Chelsea, but after the Londoners' dismal Premier League campaign last season, has decided to move.

Kyle Walker also joins from Manchester City, for a bargain fee of 10 million. The England international joined the Citizens from Tottenham two summers ago for 15 million, but has failed to make an impact, making only 9 appearances in the Premier League over 2 seasons, and Roberto Mancini has allowed the right-back to leave. 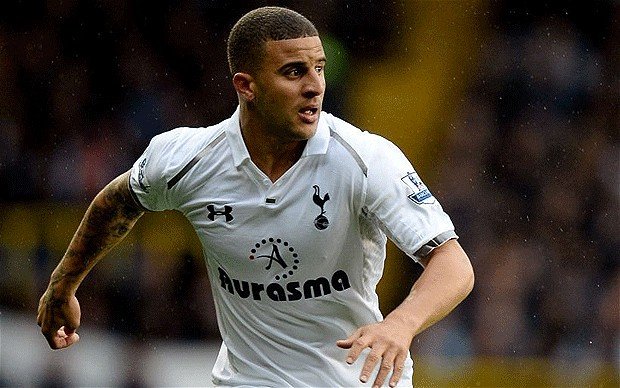 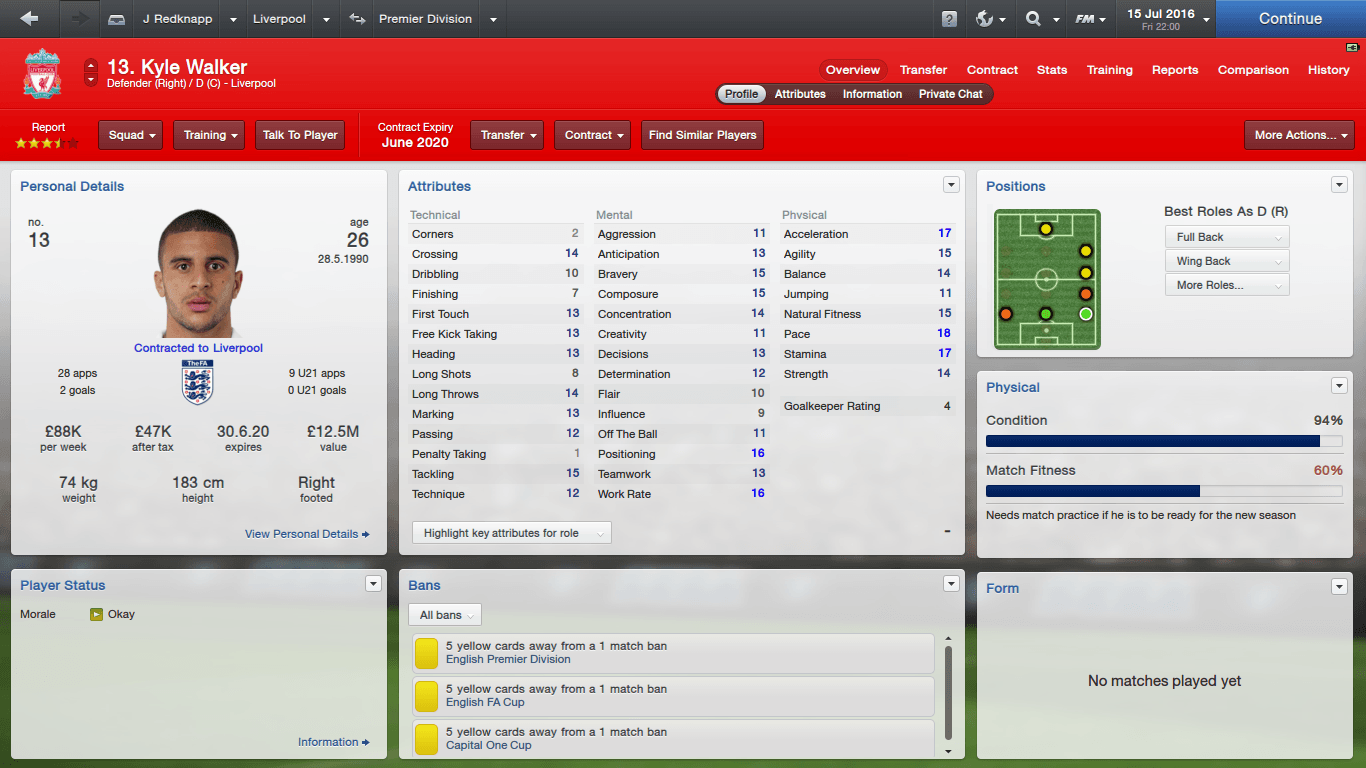 Liverpool were originally in the hunt to sign Walker, but was beaten off by Manchester City in 2014.
Login to Quote

In a time period of five days, four players have left the Anfield club.

Manuel Fernandes departs for Huddersfield after just six months at Liverpool, with the Terriers paying 5 million to acquire the services of the former Besiktas midfielder. 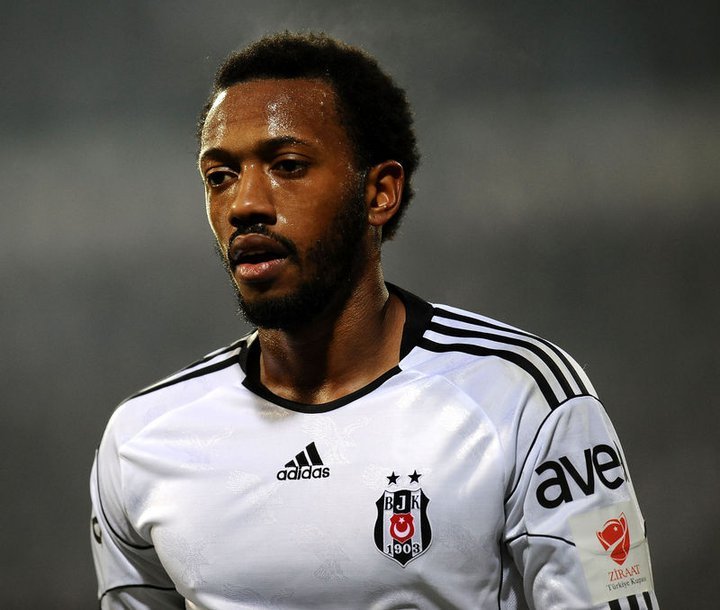 Alvaro Arbeloa has confirmed his departure from the club on a free transfer, six months after his return to Liverpool. 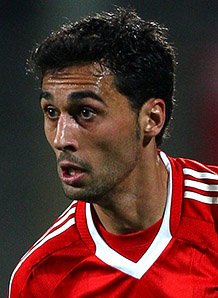 Felipe Anderson, purchased from Santos for 18 million a few years ago, departs to Napoli for just 1 million. 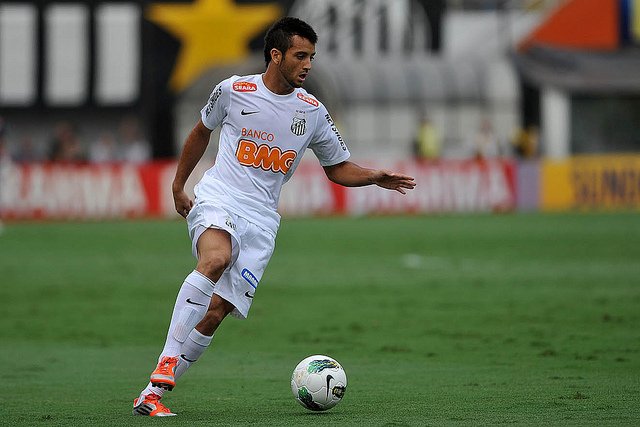 Last but not least, Samed Yesil is released from his expired contract at Liverpool and links up with Peterborough. 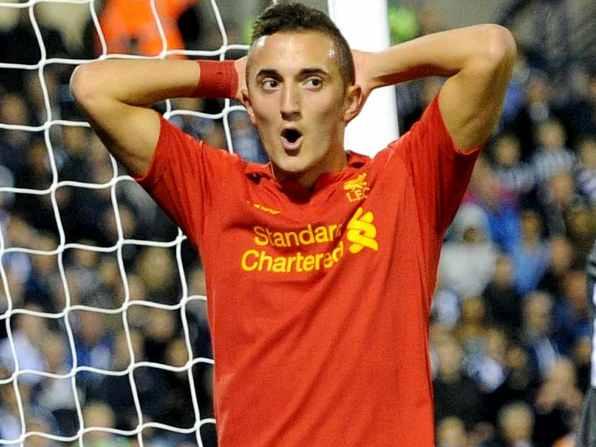 I didn't even know about it until I read about it - Xabi Alonso had been released.

Yes, Xabi Alonso. The Spanish midfield magician has been declining in his performances for the past two seasons with Real Madrid, particularly last season as the Spaniard only played 2 league games in the entire La Liga season. The club didn't need a midfielder, but an extra backup wouldn't hurt. Now 34, Alonso didn't have much to offer, but I, as a Liverpool fan, would consider him a Liverpool legend. His experience could also help the youngsters out in the dressing room. Why not?

Most managers in my situation would offer him a trial. Trial my ass. I was going to get him. A one-year contract. No risks.

As I read through Alonso's international reports from websites, I was amazed. The lad had played in four European Championships, and three World Cups altogether. Now I certainly didn't know that. Even after being released by Real Madrid, Alonso remained an integral part of the Spain national team.

That was enough to convince me. I sent Steve Round and Jim Leishman to Madrid in Spain, where Alonso was waiting, to trash out a deal.
Login to Quote 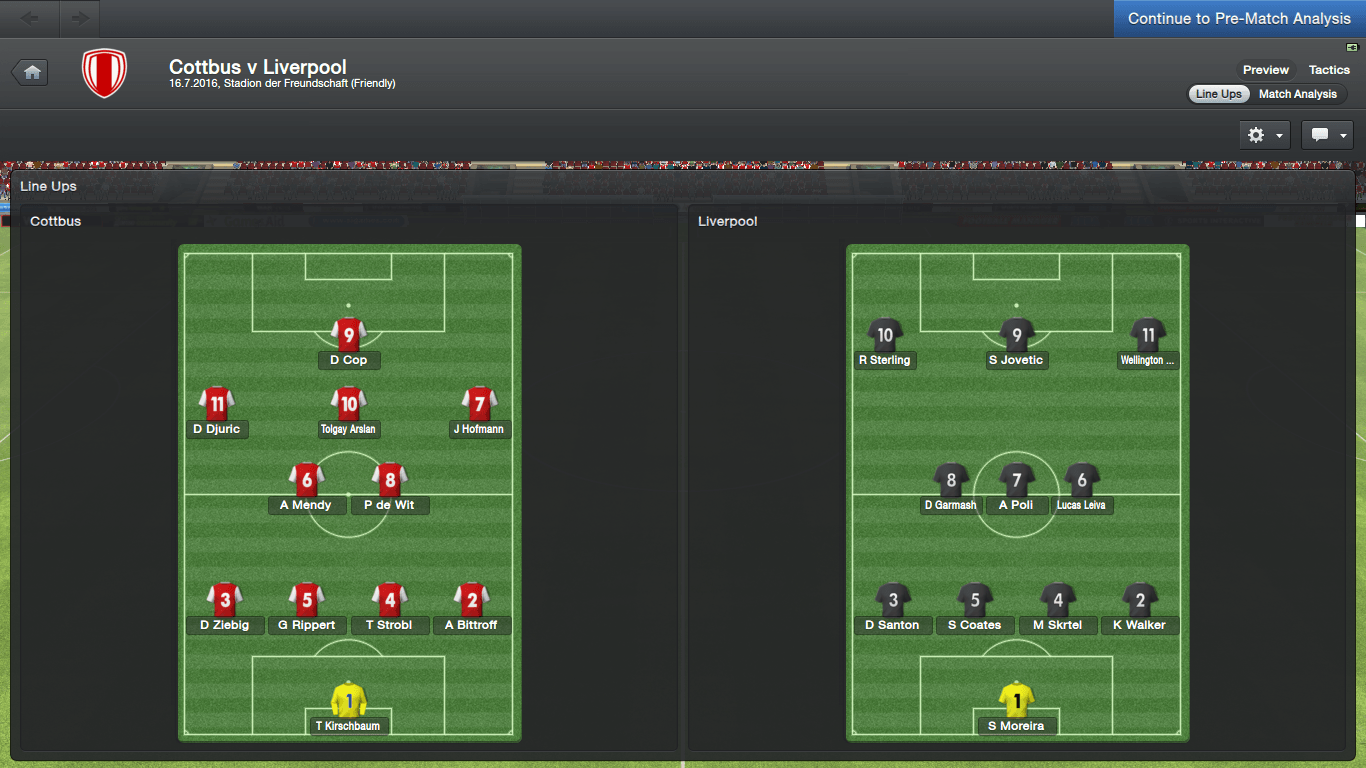 Coates - Was on the receiving end of a strong, long throw from Davide Santon. Only had to jump and head it into the net, and he did that perfectly.

Cop - Silly mistake by Skrtel to lose the Cottbus striker. We gave him a chance and he took it, unleashing a fierce strike that beat Sandro Moreira.

Coates - Magnificently, it is Seb Coates again. Davide Santon's free kick cannot beat the keeper who punches it away... straight into Coates, who taps it in. Brilliant work.

Who impressed
Sebastian Coates - The man of the match himself. Coates made no visible mistakes today and was a solid rock in the center of the defense. Also scored two goals, although none of them were spectacular, but they still gave us a win.

Sandro Moreira - As usual, Moreira made little mistakes and only conceded one goal, after going one-on-one with Cottbus' Duje Cop. Kept out Duje Cop again once the striker came rushing through for the second time with a fantastic save.

Who depressed
Martin Skrtel - Not usually one to make mistakes, the Slovakian was terribly prone to mistakes today, with Duje Cop managing to slip past Skrtel not once, not twice, but thrice - with one of these being a successful goal,

Stevan Jovetic - Captain Fantastic failed to demonstrate any fantastic showing in this match. He couldn't get near the Cottbus goal and did little to contribute to the rhythm and play of the team. Substituted for young striker Jay Knight on 45 minutes.
Login to Quote

In just a few days I have convinced Craig Bellamy and Dirk Kuyt to return to the club in a coaching capacity. They have changed from fantastic players to fantastic coaches and it'll be great to have them on board our coaching team. 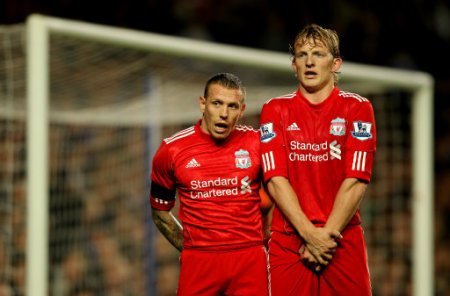 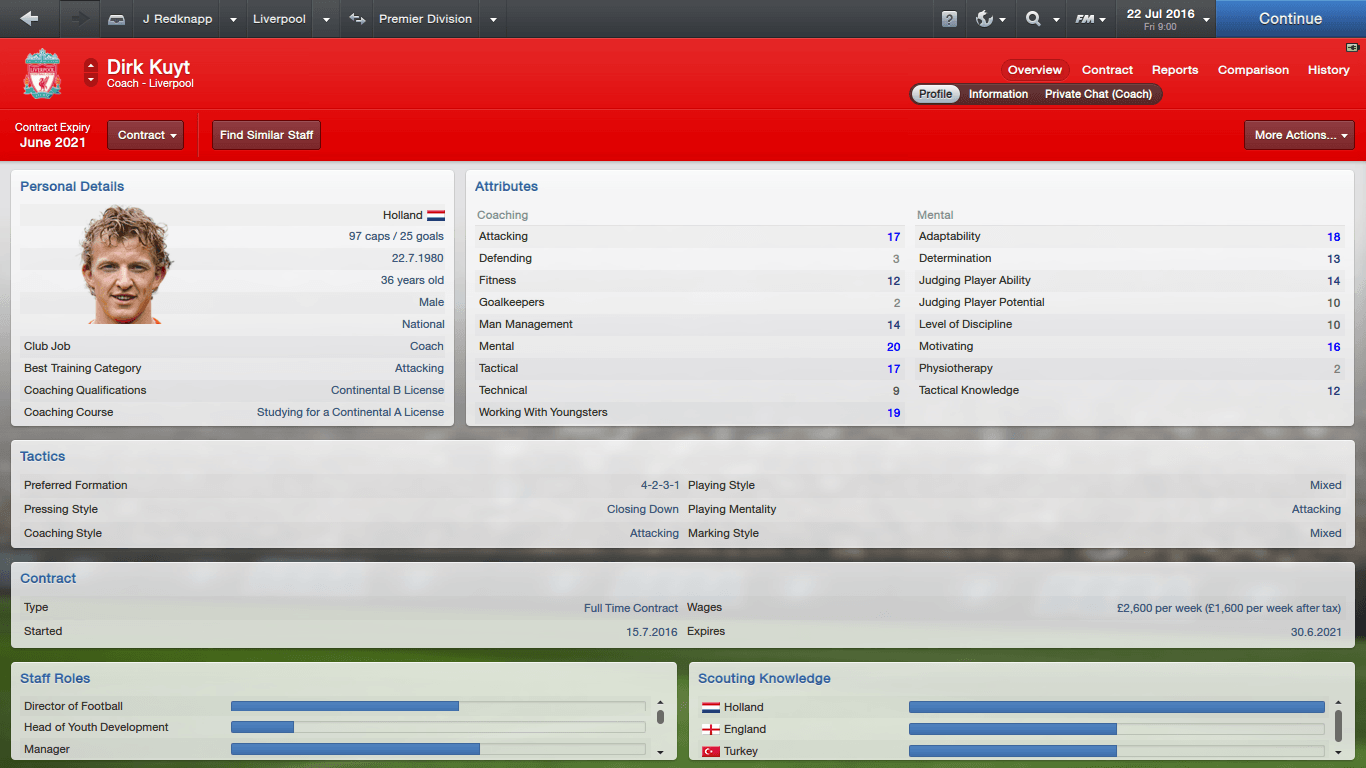 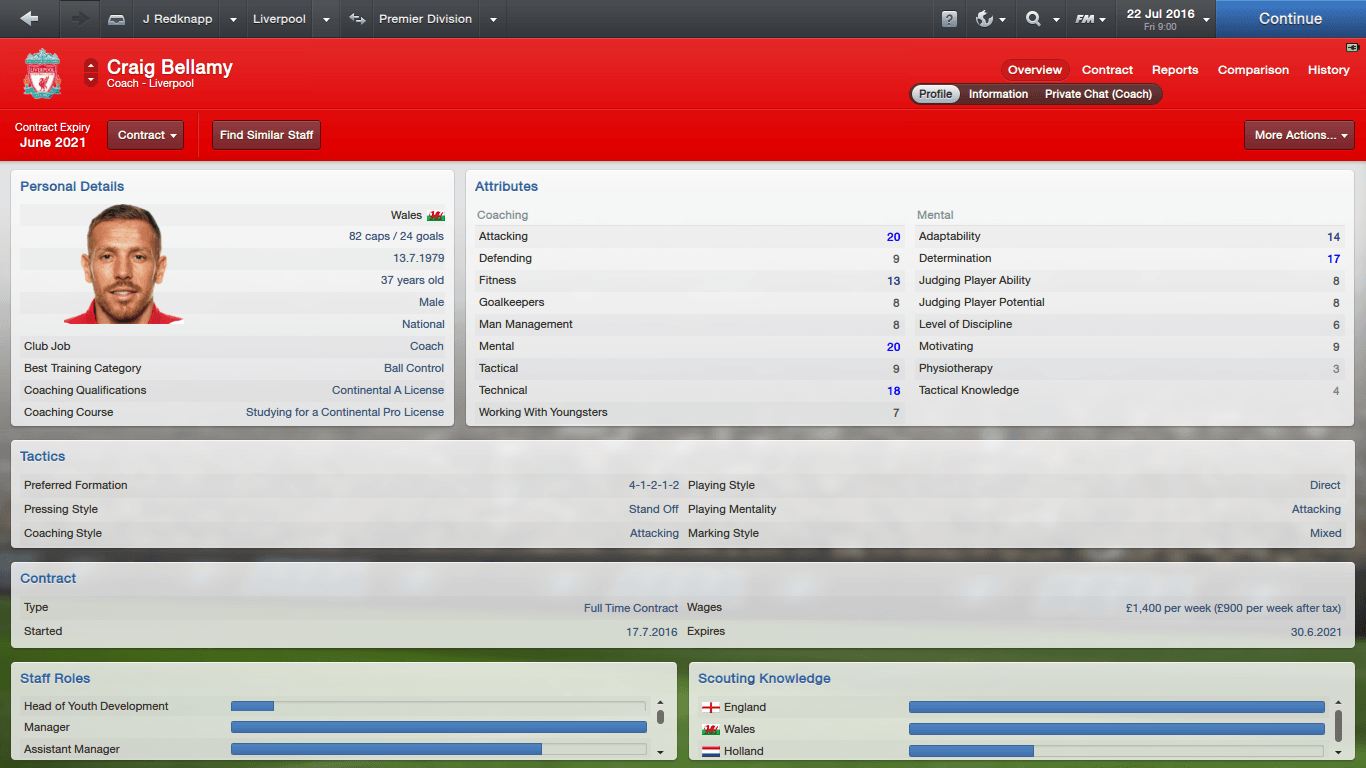 Rumors and speculation of this transfer has intensified over the last couple of days, and today, it has finally been confirmed. Xabi Alonso has returned to Anfield. 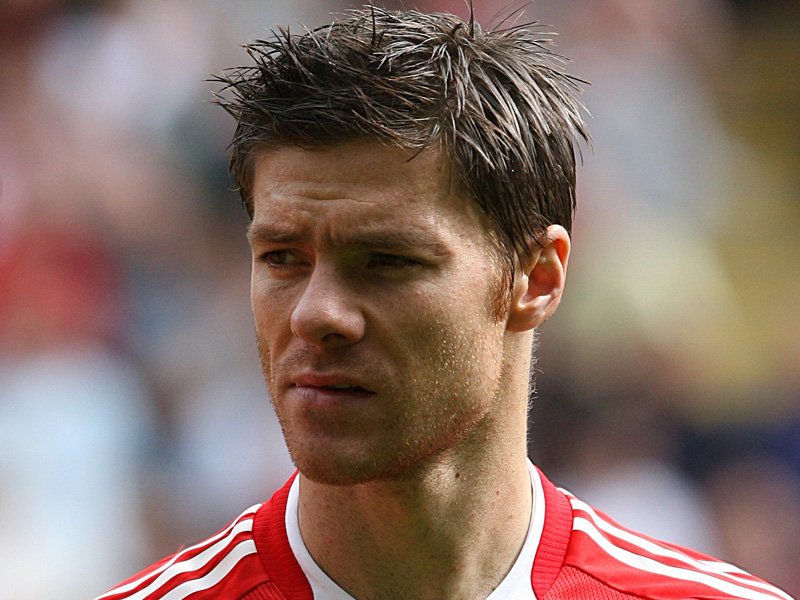 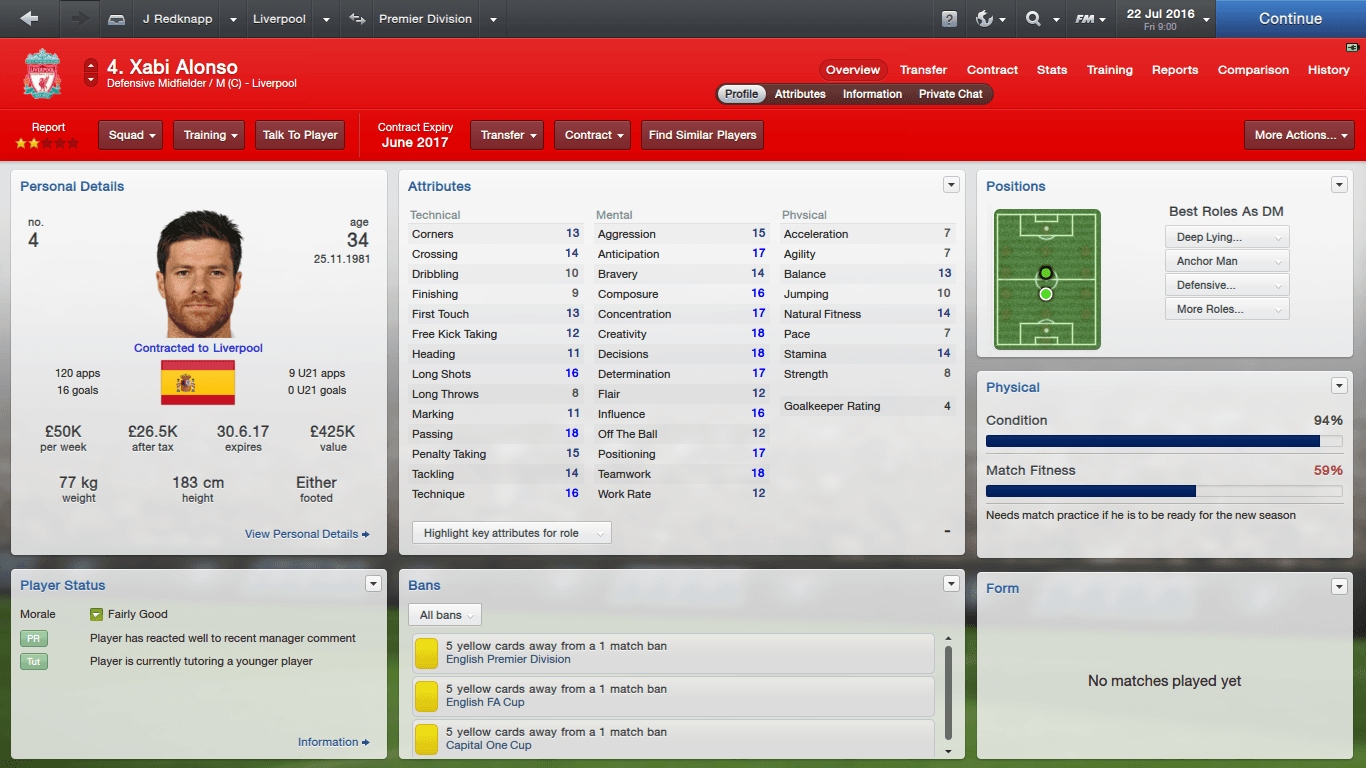 Alonso had been a vital part of the Liverpool first team since joining from Real Sociedad in 2004, before making a big money move to Real Madrid in 2009. Liverpool fans have missed the Spaniard ever since.

The last two years has not been kind to the 34-year-old, as he played only 23 times over 2 seasons for Real Madrid, his age pulling his name off the first team sheet.

Last season, Alonso made only 2 appearances in La Liga, and with the expiry of his contract, took the opportunity to leave on a free transfer.

Jamie Redknapp seized the opportunity and convinced Alonso to return to Merseyside.

"I always expected a return to Liverpool, some point in my career," said Alonso, who will wear the number 4 shirt in his second Liverpool spell. "I am very happy my return here is as a player."

Steven Gerrard, former captain of Liverpool and also a former midfield partner of Alonso while the latter was in Liverpool before, tweeted on his official Twitter account today on the purchase. "Awesome to see @XabiAlonso back at Anfield.... haven't seen him for a while!"
Login to Quote

MarkKolatowicz
8 years
theres only 1 Xabi Alonso ;D awesome player, you gonna try get him to coach aswell when he retires ?
1
Login to Quote

Huh? I know he's old, but I brought him in as a backup player.

nicknack17
8 years
not gunna lie, this stories epic. I one day hope to emulate something similar to this haha
1
Login to Quote

Kiwi
8 years
Wow - Jamie is spending up large!! 34M is not small change Mr Tham, but you seem to be doing great things and hope you can mount a challenge for EPL and Europe (and beyond) this term! 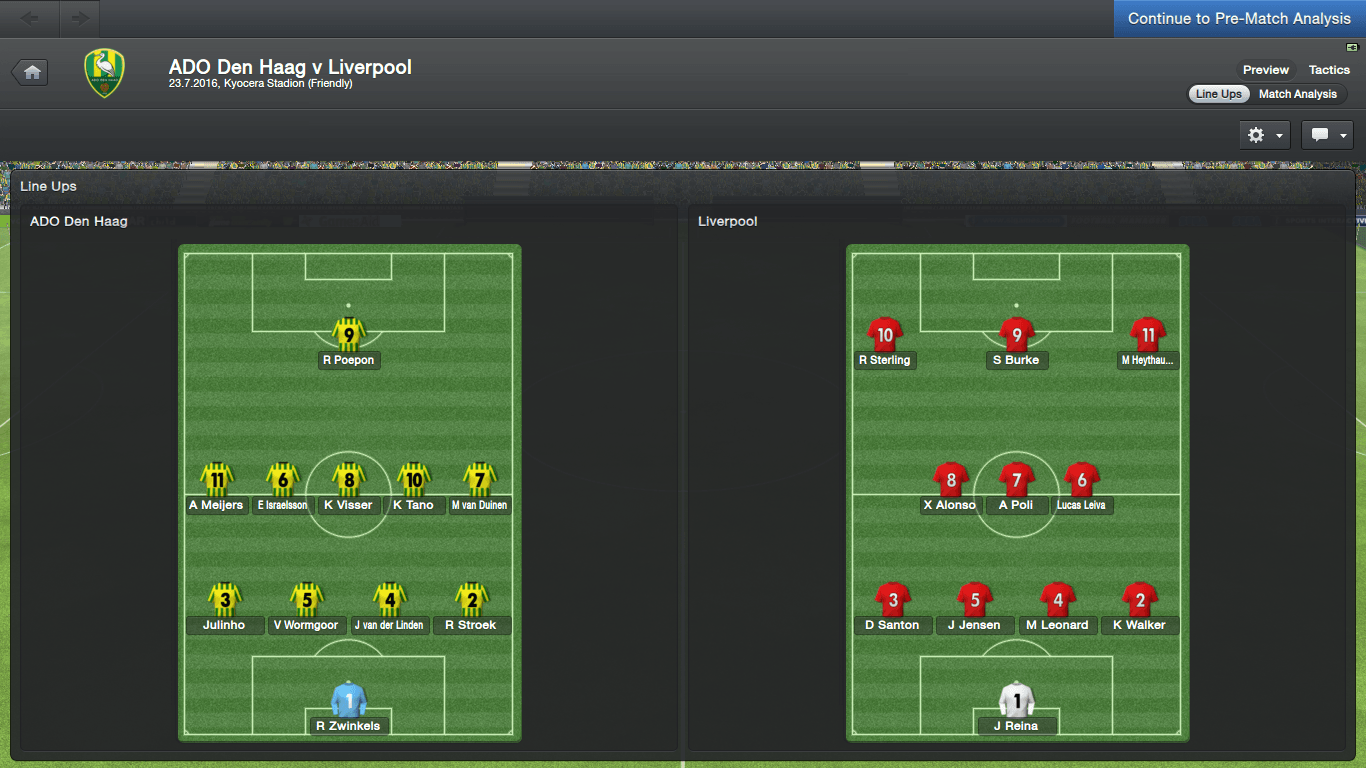 Alonso - 4th minute header by Xabi into the back of the net from a Lucas Leiva corner. Scores with his first ever touch as a Liverpool player in almost 8 years.

Sterling - Closes in on the keeper from the left and scores from a tight angle. Wonderful shot.

Toornstra - The Liverpool box is packed with both Red defenders and Den Haag attackers. The confusion leaves Toornstra free to get a shot in, beating Pepe Reina.

Who impressed
Lucas Leiva - Demonstrated his quality again today in the heart of midfield. Also Showed why he was now the undisputed first-choice corner taker with a great swing into the box for Xabi Alonso to score.

Xabi Alonso - Performed well with Lucas in midfield, also managed to get a goal in with a header.

Jesper Jensen - The young Danish defender again showed why he was dubbed the next Daniel Agger with a brilliant performance in defense. Got an accurate lob up to Sterling which eventually resulted in Sterling's goal. Hassled the opposition's attackers very well.

Who depressed
Kyle Walker - Couldn't do much about the opposition and had to leave all the work to Leonard and Jensen. Didn't look good nor fit as he ran up and down the field without doing anything, like a headless chicken.

Sean Burke - Was unable to get much of the ball, nor find the net. Will need to be more prolific if he wants to make the step-up to the first-team.
Login to Quote

This is great. Barcelona and Spain legend Xavi has agreed to join my coaching team in Liverpool. I haven't met him personally before but obviously I have heard about and watched him play all the time. He has no previous backroom experience but I'm confident he'll do a good job for me here. 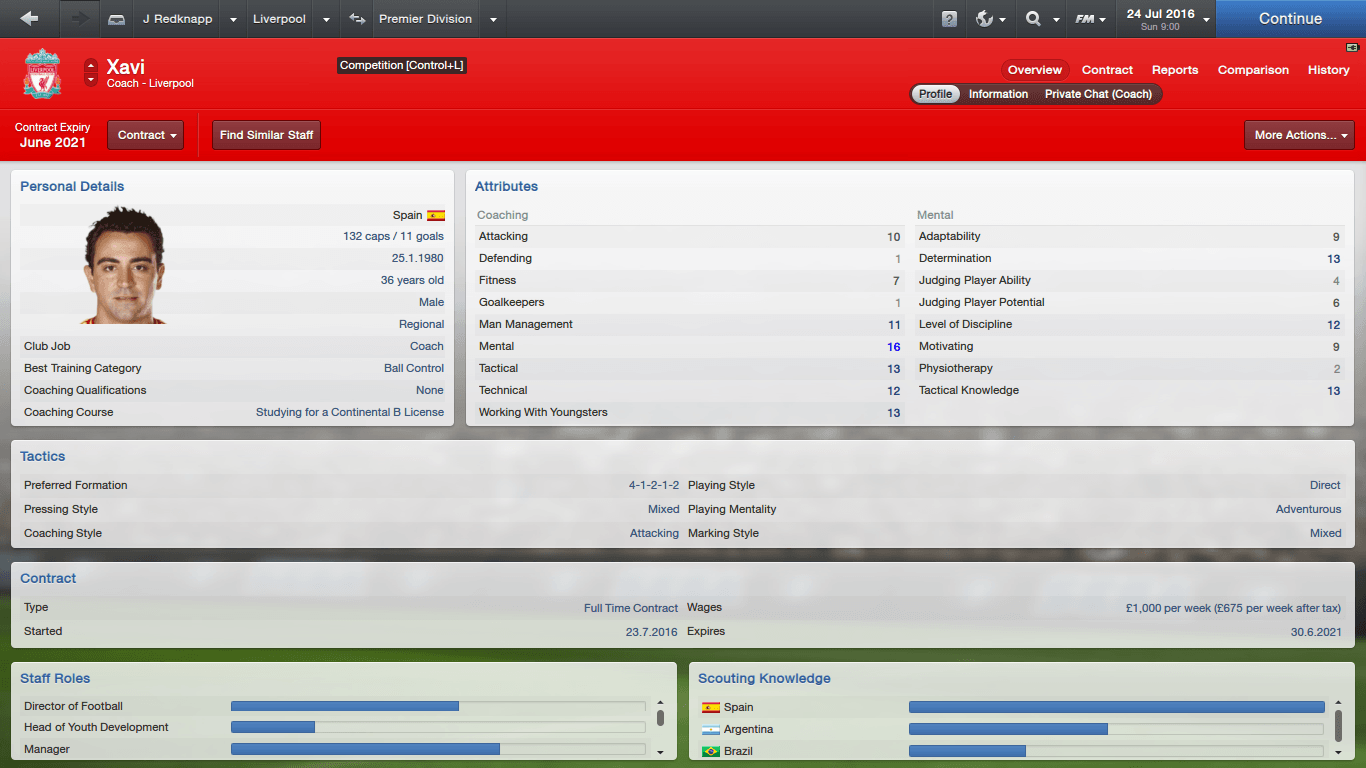 You are reading "The Redknapp Revolution: Once Again".