crisrko
8 years
Steaua Bucharest
Steaua Bucharest is a Romanian professional football club based in Bucharest. They are the most successful Romanian football team in European competitions as well in the Romanian Liga I (23 championship wins). They became the first East European team to win the European Cup, being victorious in the 1986 European Cup final. Steaua played again in the final of the 1988/1989 European Cup.

The club is historically known as the Romanian Army sports club. The football department separated, however, in 1998. At the moment, its only direct link to the Army is their home ground, Stadionul Ghencea, property of the Ministry of National Defence.

Steaua has spent all its history in the country's top-flight league, and has finished below the sixth spot for only five times. They have finished third in the last season. Initially, the club played in the colors of the Romanian tricolor - blue, yellow and red - but yellow soon lost its importance, and the team became associated with the red and blue colors. Recently, away kits have begun to reintegrate the yellow color.

Lets start with the start, shall we?
My first eleven, and main tactic is below. 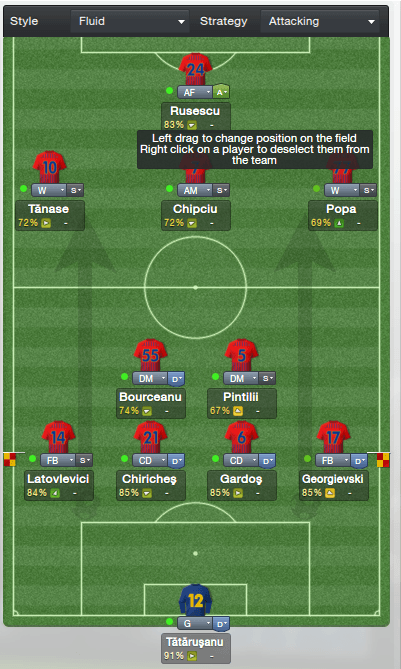 Here is my squad. FULL squad. I'll have to sell some of them and bring a few new players though. 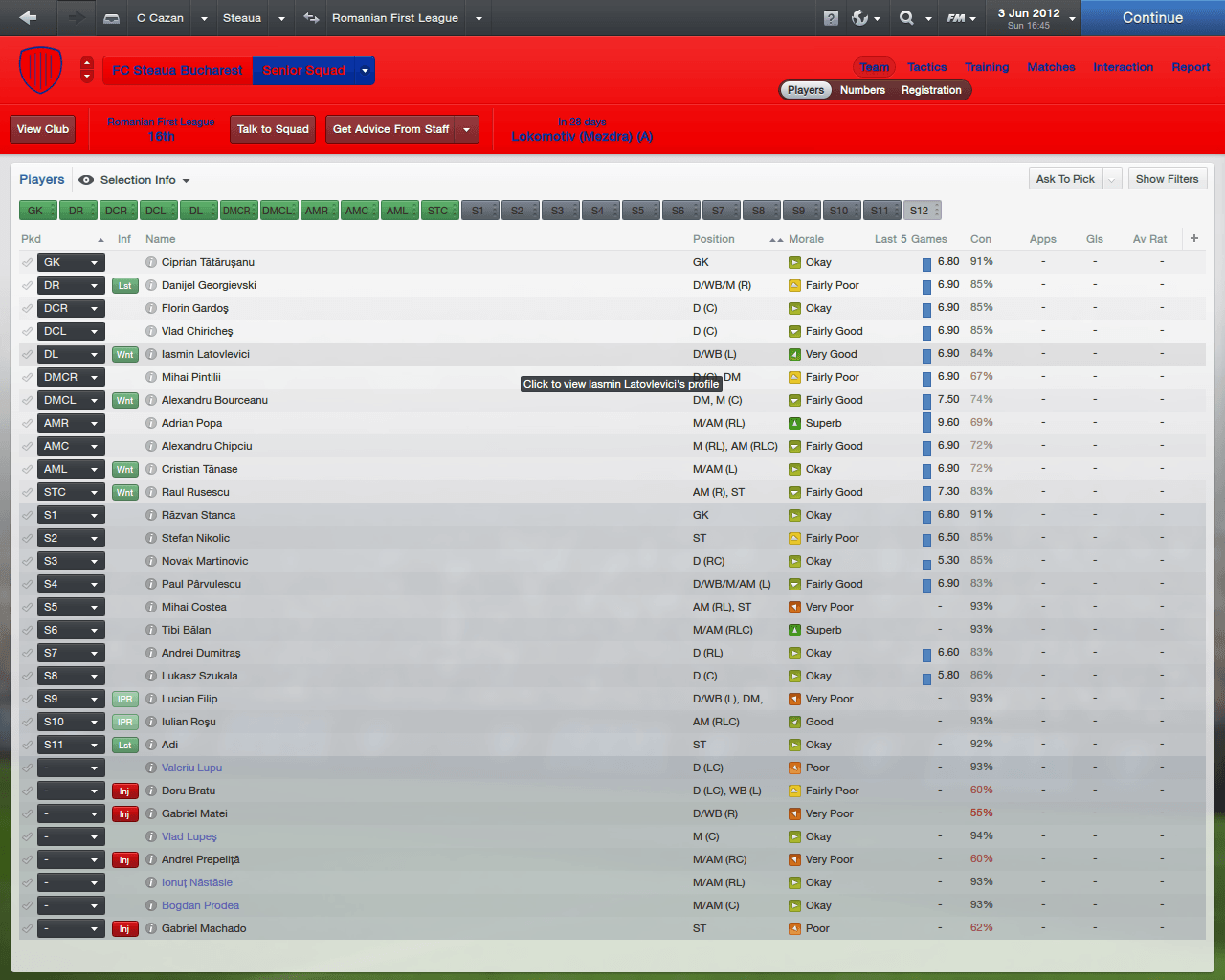 crisrko
8 years
Transfer targets?
And this is why we love pre-season. The board offered me 1.3mil for transfer budgets and 80k p/w for wages. Its not too bad, it could be better, but I can get good players for these ammounts of money. My first transfer is in the offensive department (funnily, all my targets are related to attack). 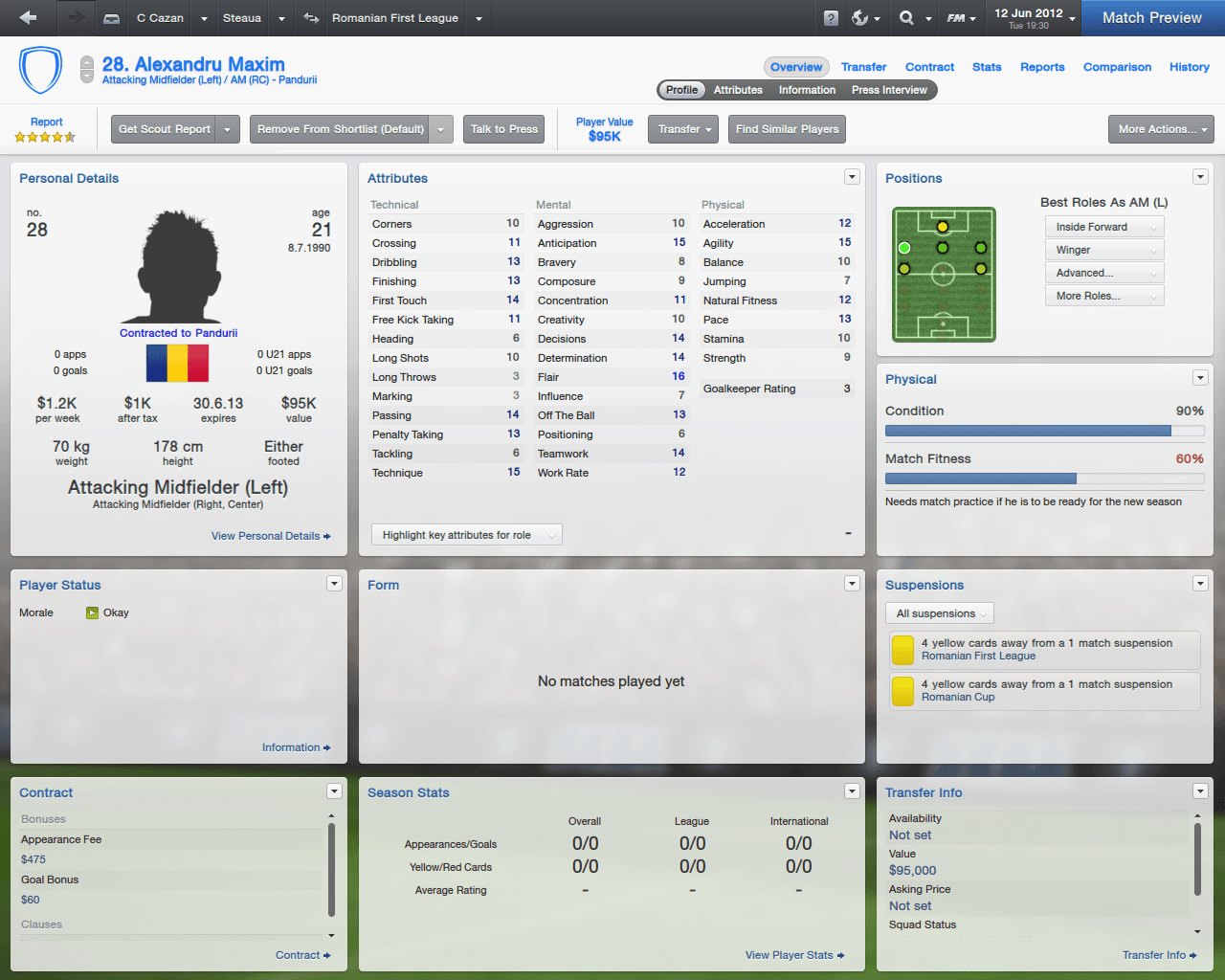 Gurdit
8 years
Looks like you're going for a rather defensive tactic (especially at the back). Why would you say that is?

Also, I would love to read some of the cultural nuances of the Bulgarian Leagues. I want to know who the big-shots are, what the big rivalries are, etc. Are there any spicy or (in)famous incidents that have happened in the league? Etc. Make it interesting for people who are unfamiliar with the Romanian League.
Login to Quote

crisrko
8 years
As you wish.
First, the tactic is indeed somewhat defensive. I made the tactic so we can use the wings, where our midfielders are rather pacy. Its kind of based on counter attacks and speed explosion, like the tactic Steaua uses in real life.

For the people that don't know about this, there is a very big rivalry between the clubs of Bucharest. I can say that Dinamo Bucharest and Steaua Bucharest are complete rivals since the clubs were created. Rapid Bucharest is a big shot in this rivalry too. He's rival with both clubs, but Dinamo - Steaua is the El Clasico of Romania.

Romanian league is very competitive. Teams are somewhat balanced, but this year, Steaua has the best team after CFR. CFR's only issue is that they have very poor form in the league, so Steaua took advantage of that, and they're leading the RFD by 10 points.

Bigshots, from the player point of view are Raul Rusescu, our striker. He has great quality, and he bangs in goals. He's not who knows how pacy, but he is clinical infront of goal, and is very good when it comes down to Penalties. Chiriches, another Steaua player, defender, is fabulous too. He's attracting interest from the big leagues, like Italy and England first divisions. Felguiras, CFR's GK is doing great too, curently under bid from Manchester United. Ferguson wants him to replace Lindegaard. Alexandru Maxim, possibly the most promising youngster in a while, and Steaua is keen on getting him, but uh, since Steaua's board is ... lets say, arrogant and stuff, they screwed it over. There are alot of good players around.

Incidents that happened.. I could call it an irony. Steaua had a defender called Galamaz, who is somewhat old, 30 years old now. In a match against Petrolul, a Petrolul fan came on the field, and punched him in the temple area with keys. Martinovic, Steaua's defender, karate dropkicked him, and that guy got arrested. Galamaz in the present, plays at Petrolul.

Now, lets get back to my interest list, shall we?

We're not interested in too many players, because as you seen in the first screenshot, in the first post, we have alot of players for all the positions. We could get better players, but my transfer budget is pretty low to get some good transfers in.
Login to Quote

Did that temple punch thing happen in real life?
Login to Quote

crisrko
8 years
Nice start of a pre-season. Yes, we have beat Lokomotiv Moza 3-0, unfortunately lost to Heerenven 3-2 in the 93rd minute, and won 4-1 against Montana. Nice start of a pre-season means good for for the players. They're doing well with the fitness chapter. Fatai has been clinical, scored 5 in these 3 matches, and if he'll play like this in the season, he and Rusescu may kill everyone in their way. With the transfer of Fatai, and alot of staffs, we have spent a fair chunk of money.

Who's on our get-rid-of list?
#1 Adi Rocha. Brazilian, but fat. I don't rate him, and he's not good IRL either. Noone's looking to get him though.

#2 Nikolic.. Nikolic you drunk bastard. I don't like him in FM, never did, won't start. I need clincal strikers, and I already have alot of strikers.

#3 Gabriel Machado. Injured for alot of time, but I don't like him. Its time to go my friend.

Surprisingly, teams are lining up for some of my players.
I got a 3.2mil for Rusescu, and I'm considering not taking it, since he's a great striker, and I need all the force I can get.

Bourceanu, our captain. Gattuso del Romania. We have Heerenven interested in him, but we're not even thinking of getting rid of him.
Login to Quote

crisrko
8 years
Season's underway. Three matches in, first place on the table
And the season is finally underway. We have played thee matches, and won each of them. We defeated Chiajna 6-0, beat Viitorul Constanta 3-0 and CS Turnu Severin 1-0. Poor perfomance we had in the last match, but in the others, we performed really well.
Fatai, who is my new striker, has performed far above expectations, banging 6 goals in 4 matches. He has 5 goals in the league, playing 2 matches, and 1 goal in Euro Cup, banged against Teuta. Oh yes, we defeated Teuta 3-0 on aggregate, Fatai grabbing a goal and an assist.
We're past the third qualification round, so we going in the playoffs. We're going to face Sherrif, a team from Moldova, and we're hoping for the qualification.
Rusescu is curently injured, and unfortunately he hasn't played. But that means more time for Costea, Nikolic and Rosu on the field. Nikolic has scored a goal against Constanta, when he was on the transfer list, so I guess he's going to perform. If he'll do GOOD, I'll keep him. Adi Rocha, isn't getting any chance, and I just want him out. I don't care that much about the money off him, since I won't get more than 500k on him.
Login to Quote

crisrko
8 years
What the fuck?
With the return of Rusescu, we drew 3-3 against U Cluj. He banged in two goals, and Martinovic, scored a total beauty. Goal of the season?

crisrko
8 years
Almost January
Its almost the half of the season. We have played a firm load of matches, fourteen in the league, and three matches in the group. How is the group you ask? Great, we're second position with seven points, on par with PSV. The difference is the GD, but its nothing to worry about. Next match will be against Rubin, whom we have defeated 3-1 in the first match, on their stadium. We drew 2-2 with PSV, at home, so I fear for the match in Holland. Helsinborg is not a threat. We beat them at their house, so we'll beat them at our home too.

Fatai, this boy has been phenomenal. He has 18 matches played, and scored 18. In the league, he scored 13 goals out of 11 matches, so he is the first position in the goalscoarers list. Second spot's Ionel Danciulescu, Dinamo's striker, whom has 12 goals. I gave a chance to the two promising youngsters, Cojocaru and Puskas. Puskas delighted me with a 25 yard goal in a match in the romanian cup, while Cojocaru didn't allow anyone to beat him. I predict a bright future for them, if they'll keep the hardwork up.

I'm struggling to get rid of Nikolic, Matei, Machado and I might possibly get rid of Bratu and Prepelita too. Matei is error prone. He played his return game, got injured 6 more months. I'll try to terminate his contract or do something, because I don't want to pay him his salary and have him injured all the time. Prepelita is injury prone too, but lower injuries. He plays well sometimes, but... ugh. Machado, Nikolic, terrible. They don't suit my tactic at all, so they'll be on their way to find a new club. Costea might leave too, if I decide to bring in Cornelius, from Kobenhaven.

I have big plans for January. I'm looking to bring in a DR, and possibly, a GK, AML, ST. Why AML? We have only Tanase, and Popa can play on that position too, but I don't like him on the left wing. So I'll need a replacement. Parvulescu can play too, but... he's just not so good. ST, like I said, Cornelius or nothing. GK? Stanca is getting old, I prefer younger players. Will look for a romanian though, and if unlucky, Cojocaru gets promoted, Stanca gets booted. 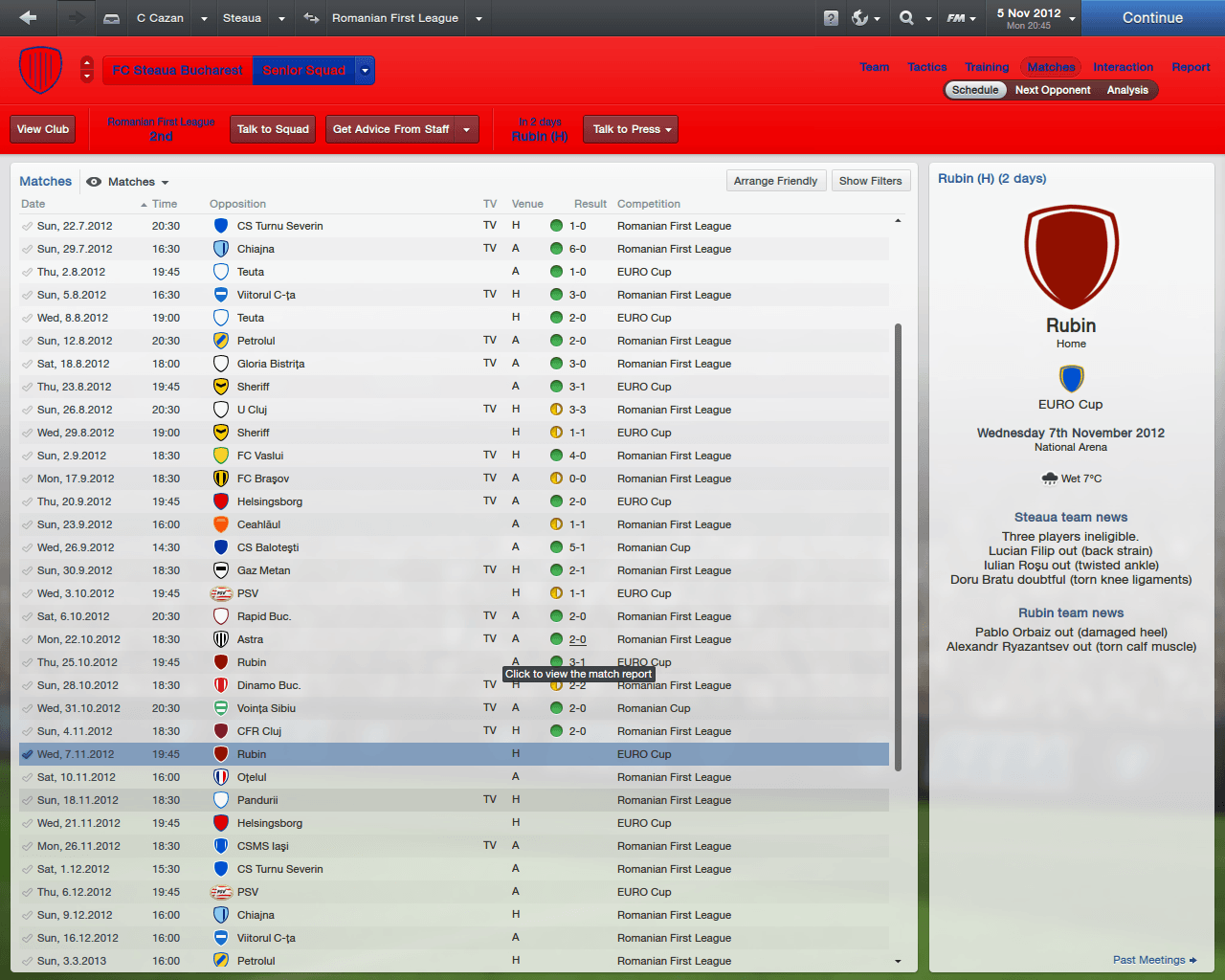 Keep up the good work!
Login to Quote