crisrko
8 years
First of december
First of december, a beautiful day for any romanian. First of December is the day Romania was born, from the union of Transylvania with "Little Romania", formed of Muntenia and Moldova. So just I don't go in this uhm, history lesson, 1st of december means a turning point in the romanian league.

Cristian has received today an e-mail from the board, regarding a day off for both him and the club, in symbol of the country's national day. Besides that, Cristian was notified that his position within the club been strenghtened, as his post is very secure, the board is really pleased with the performances, and they are glad we are playing offensive soccer. Steaua, is a very difficult club. Not only that the board might sack you without any prior announcement, but the team sometimes falls to the classic complacemency. 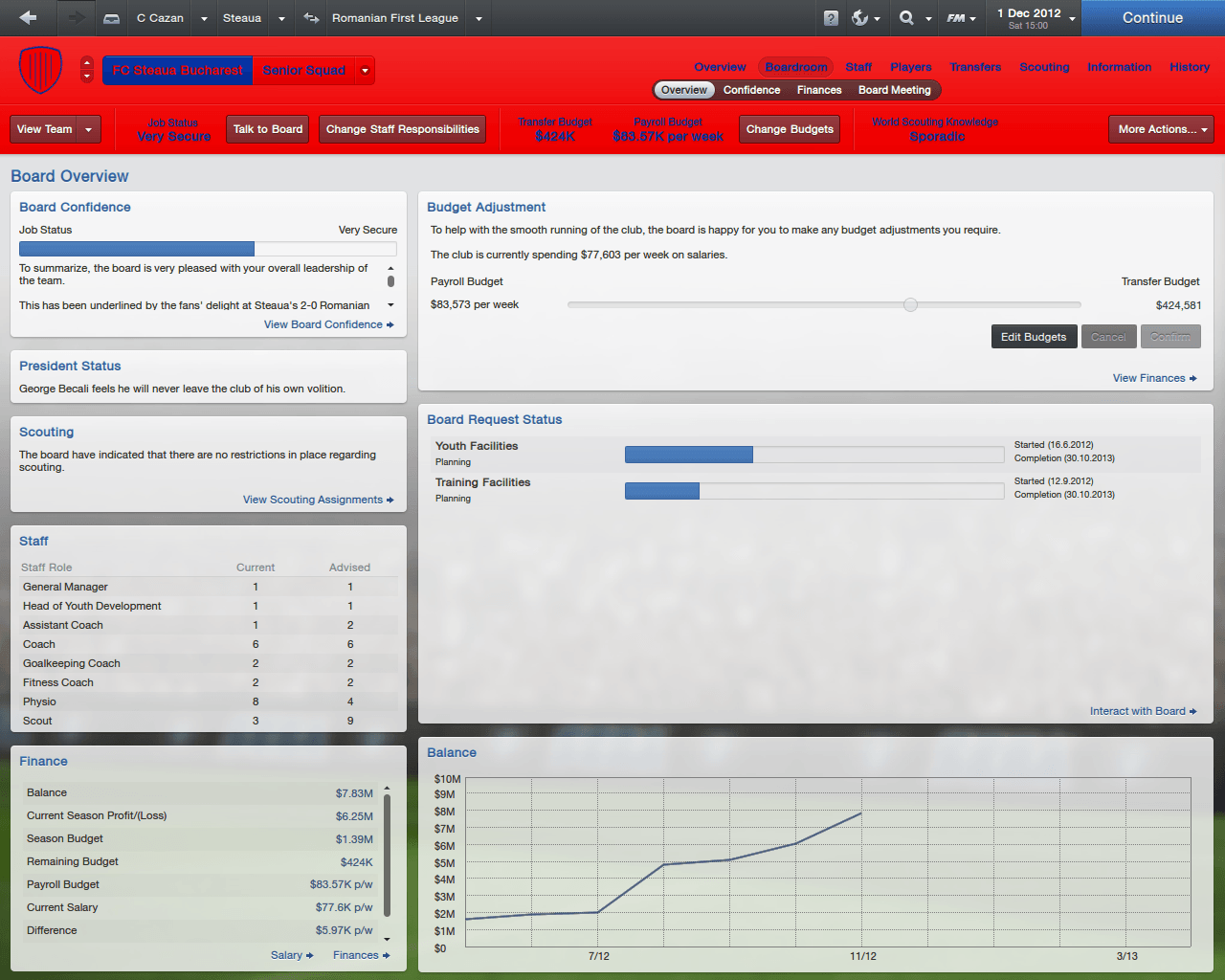 Our players have done fabulously, and we're fighting Otelul Galati, who are having a surprising season, on road for supremacy. Unfortunately for us, we suffered defeat when we faced them, due a fine strike from Marius Pena, their top goalscoarer. As you see in the spoiler, we're not doing so bad. 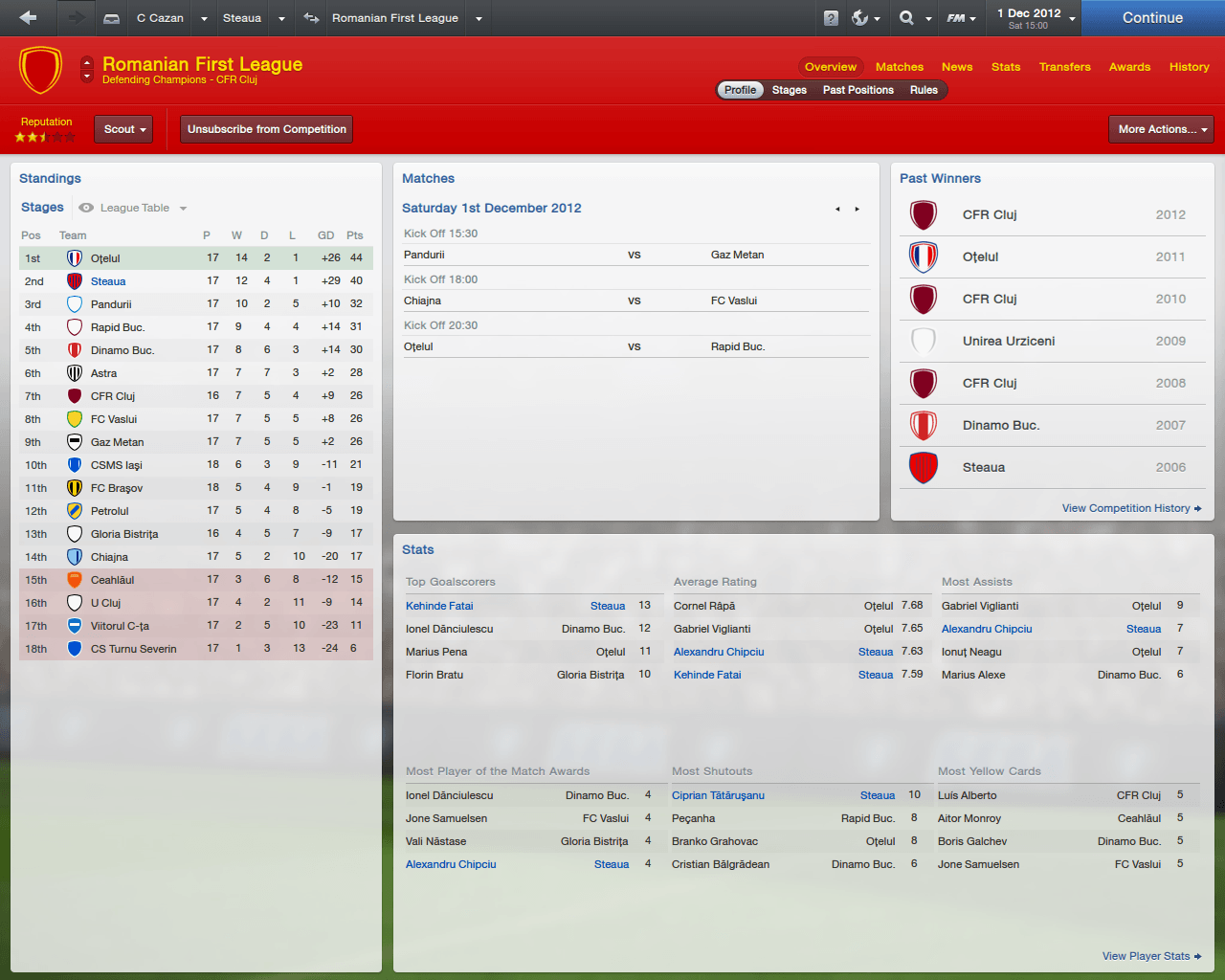 This is the half season post, as we're embarking soon on the other half. Europa League wise, we're already qualified, and have one match left to play. Afterwards, its the draw that we must fear. But nothing can go wrong if we stay motivated, we rotate well, and so on. Georgievski will leave us on a free, as he doesn't want to extend his contract, so we will be much thiner on the DR position. We only have Dumitras who plays naturally there, but Martinovic can play there too.

We have some sort of awards, classical for the half of season. Who do you think? I'll tell you, then!

Our top goalscoare? Fatai, the new signing. Spent over $500k, yet his performances have been brilliant. I say we owe him alot. I hope its not a one season deal, I surely hope its not.

Top performer? Clash won by Chipciu! This boy has been dizzling everyone with his pace and skills, and has won us matches and aided us when we were weak.

Best passer? Tanase. Alot of assists, good passes. Strong foot. All that must be noted.

Thats it!
Login to Quote

crisrko
8 years
The knockouts...
Really unlucky with the draw. Despite finishing first, we will have to unluckily face Napoli, the italian club. If we manage to pass through, we will either go against Marseille or HC Heerenven.

I'm somewhat dissapointed with the draw, I don't have extremely high hopes for the match against Napoli, as the last time we played against them, we failed to qualify, due to UEFA's refeere. Unlucky, but life goes on! Steaua can't stop, won't stop.
Login to Quote

crisrko
8 years
2013. First january
Oh boy. Its the start of 2013. We already survived 2012 so the world keeps going on. The awards, World Golden Ball, World Player of the Year and European Golden Boy have named their winners. Like always, since Messi is overhyped and FIFA is all up his a**, the WGB and WPY have been won by him. The Golden Boy award has been by the belgian winger, Chelsea's most valued player, Eden Hazard.

Unluckily for us, Cornelius refused to open contract talks with us, and moved in Germany, at Gladbach. Despite this, we managed to secure two players, who shall join us at the end of the season. Dan Nistor, and Morozyuk, have both been snapped up on free transfers. Nisto is playing on the DM/MC position, while Morozyuk is going to be our first choice DR. 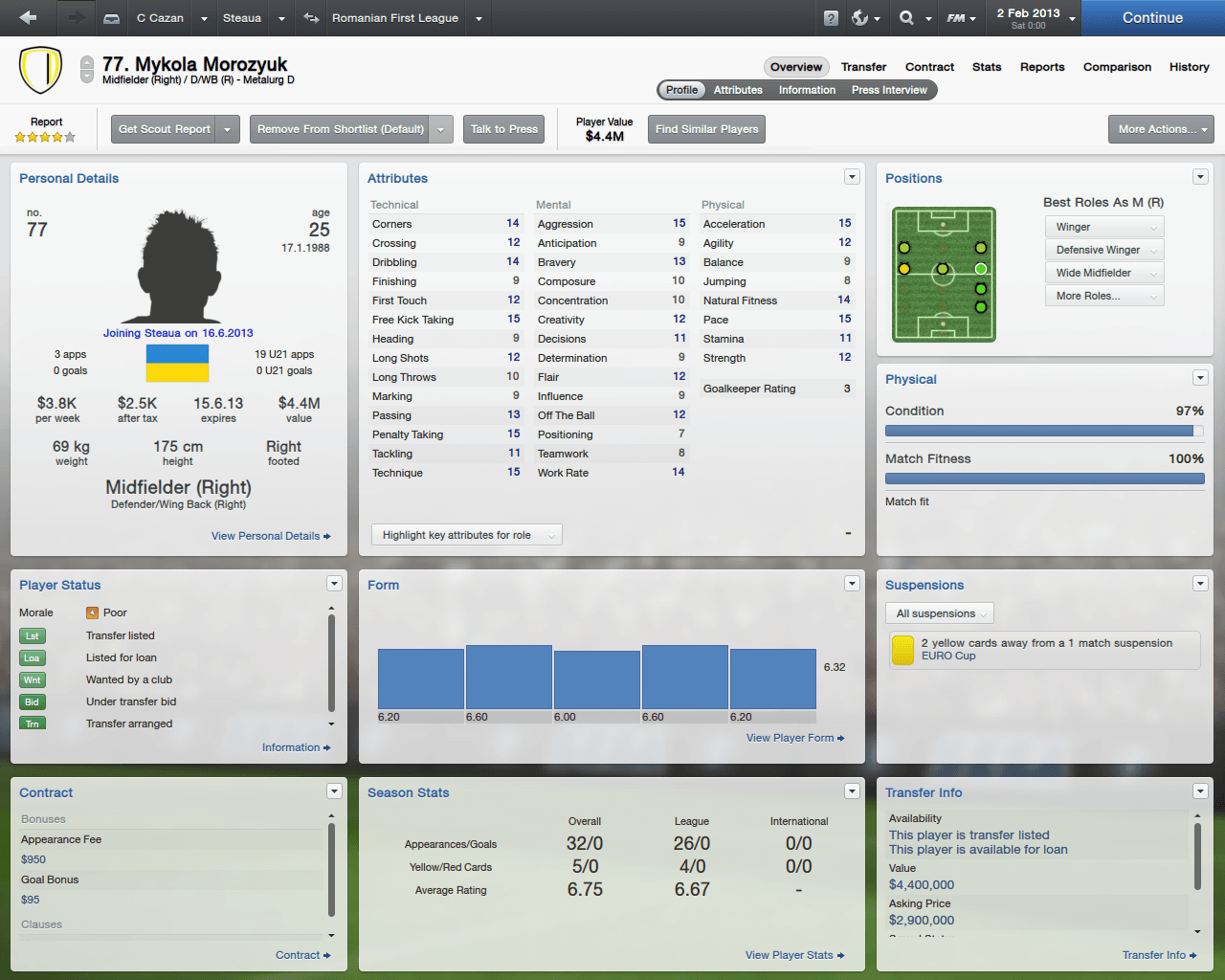 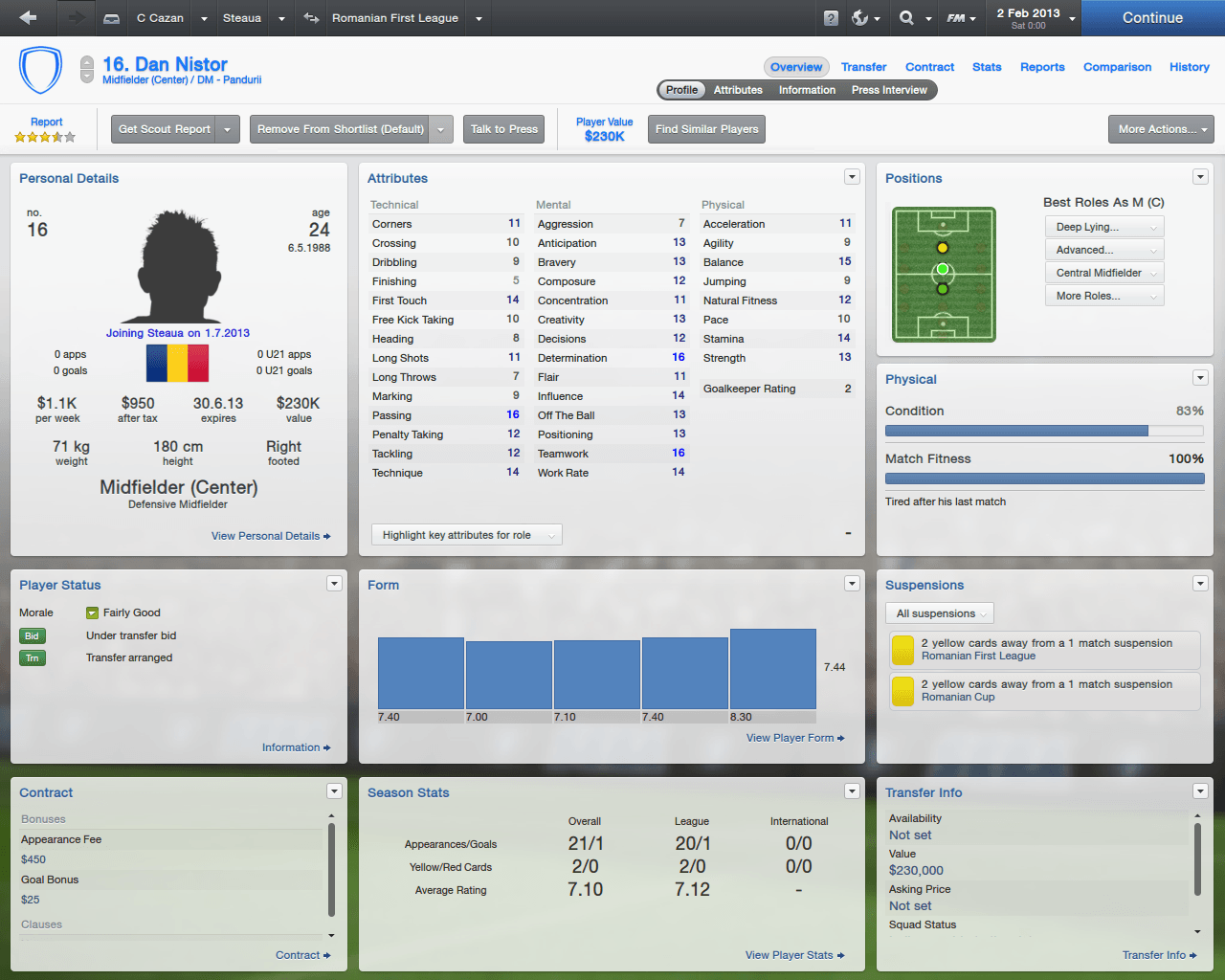 We have played for of our mid-season friendlies. In Romania, January and half of february is free, so we have time to keep our fitness up.
First match was against HSV. We drew it 2-2, due to a lucky strike in the 93rd minute from HSV.
Second one was against Velez. Drew 1-1.
The other two matches were won 2-1 each, against Red Star Belgrade and River. Fatai has been injured, and Bourceanu the same. Fatai WILL return in around three weeks, but Bourceanu is out for months, due to a torn muscle.
Login to Quote

crisrko
8 years
HUURAY!
We managed to defeat Napoli, 4-3 on aggregate. We managed a 2-2 draw in Italy, and we won 2-1 on our stadium, in the 92th minute, thanks to Adrian Popa. This guy is special, at the start of the season, he wasn't so promising, but by time, his speed played a huge part in our games. I owe him alot of wins, but I also owe Tanase for his fabulous crosses.

Unlucky again, we will face OM in Europa League. This time I have zero hopes, due to their players, Remy, Mandanda, etcetera. Still, life goes on, and we'll go through it.
With a profit of 8mil this season, I asked my board for a better wage budget, since I have plans for some future new players, but, unfortunately, they said no. Aparently, the media says that my clubs chiefs are afraid they might loose me once my contract runs out, but these cocky bastards didn't even offer me a contract! I don't want to leave Steaua, so they best offer me a contract, cause if they don't, I'm not asking for one.
Login to Quote

crisrko
8 years
And we're out
In the first match against OM, playing in France, we managed to pull a 1-1 draw. I had hopes, since we'd play on our stadium, but it wasn't so. In the second match, OM pulled a 2-1 win over us, and knocked us out of the Europa League. It was a competition that would help us financially and reputationally, but hey, thats how life is.
We have more time to concentrate on the league, and kick Otelul on the last mile. We want that title, no matter what.
Login to Quote

crisrko
8 years
We put our side first, we secure another boy
We finally made it! We just put our side first in the league, two points above Otelul! God what a battle for this first spot, but the season hasn't ended yet. As you can see from the screenshot below, we're doing well. Played 25 matches, and with only 9 matches left to go, I believe we got what it takes to hold onto this spot. Fatai, unfortunately, is in a form slump, and has been overtaken by other strikers. He scored around 22 goals in 28 matches this season, which is not bad at all, and considering the rotation in the striker role, he gives alot of chances to Rusescu, who performes almost everytime. 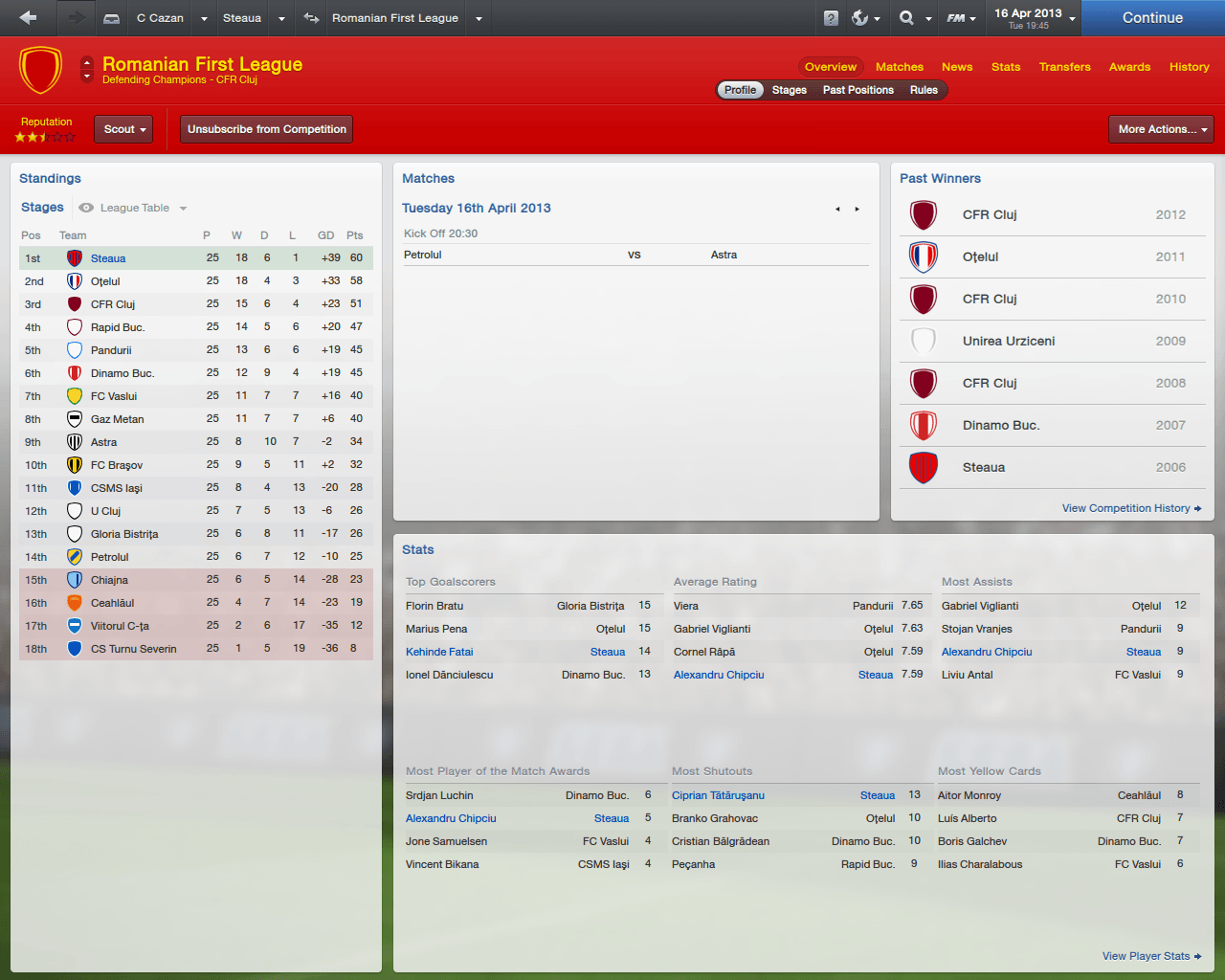 Now that we have made a firm profit this season, ranking in around 10 mil $, the board has decided to side with me, and together we finally brought Alexandru Maxim, who will join us in the summer. I forgot to say, Nikolic was loaned to Pandurii, with the option to buy him for 375k, and Machado was loaned at Delta Tulcea, in the second division. They're both performing so, I hope they will leave us soon. We're going to be good business partneres with Pandurii, since Pintilii was bought from there, Martinovic the same, Nistor and Maxim will join from Pandurii too. And Nikolic might be bought by them. 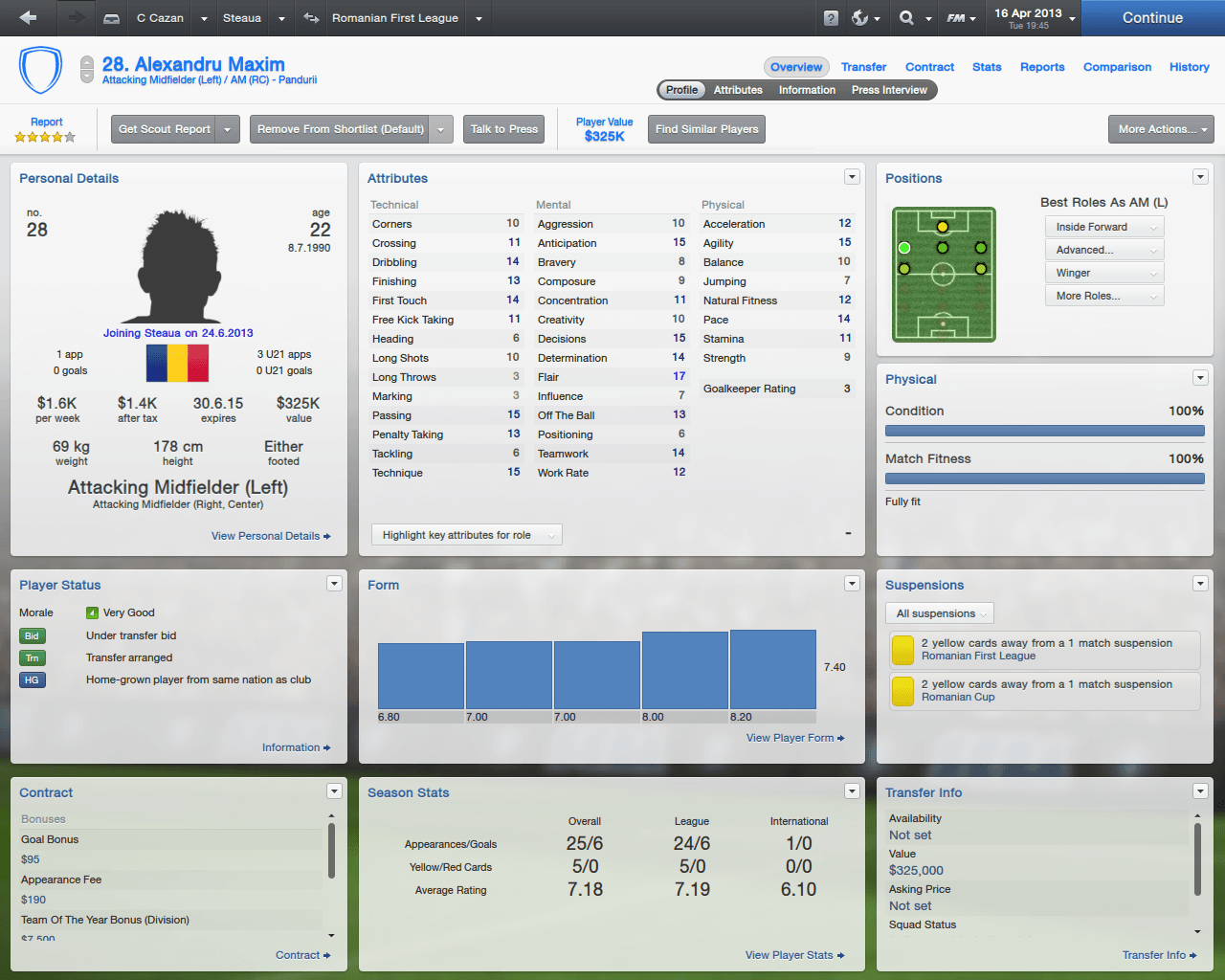 The FM Rookie
8 years
Top of the league! Congrats

crisrko
8 years
We did it! 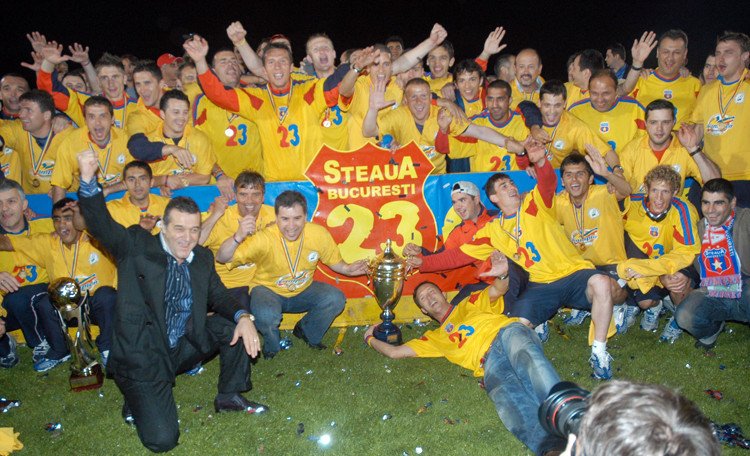 Steaua have done it! They have secured the title, after six years! Cazan broke the bad luck, and lead the club to a new Romanian First League title! We have defeated Otelul once we played them, in the 33rd match, where we won 2-0, and rounded it off with the 2-1 win against CSMS Iasi. We showed we wanted this more than them, and it paid off.

I have received the manager of the year award, beating Viorel Tanase, the manager of Otelul in a face to face clash, and taking the title from his hands. We were succesful in the league, and I had my payback against him, defeating him on our home stadium. Now, we have a new season ahead of us, and with the two snap ups, Nistor, Morozyuk, and Maxim, who's coming for 2mil, we sure have bolstered our squad. I'm letting go of 4 players, three rookies, and Razvan Stanca. Its time for Cojocaru to shine, and I hope he won't dissapoint me. 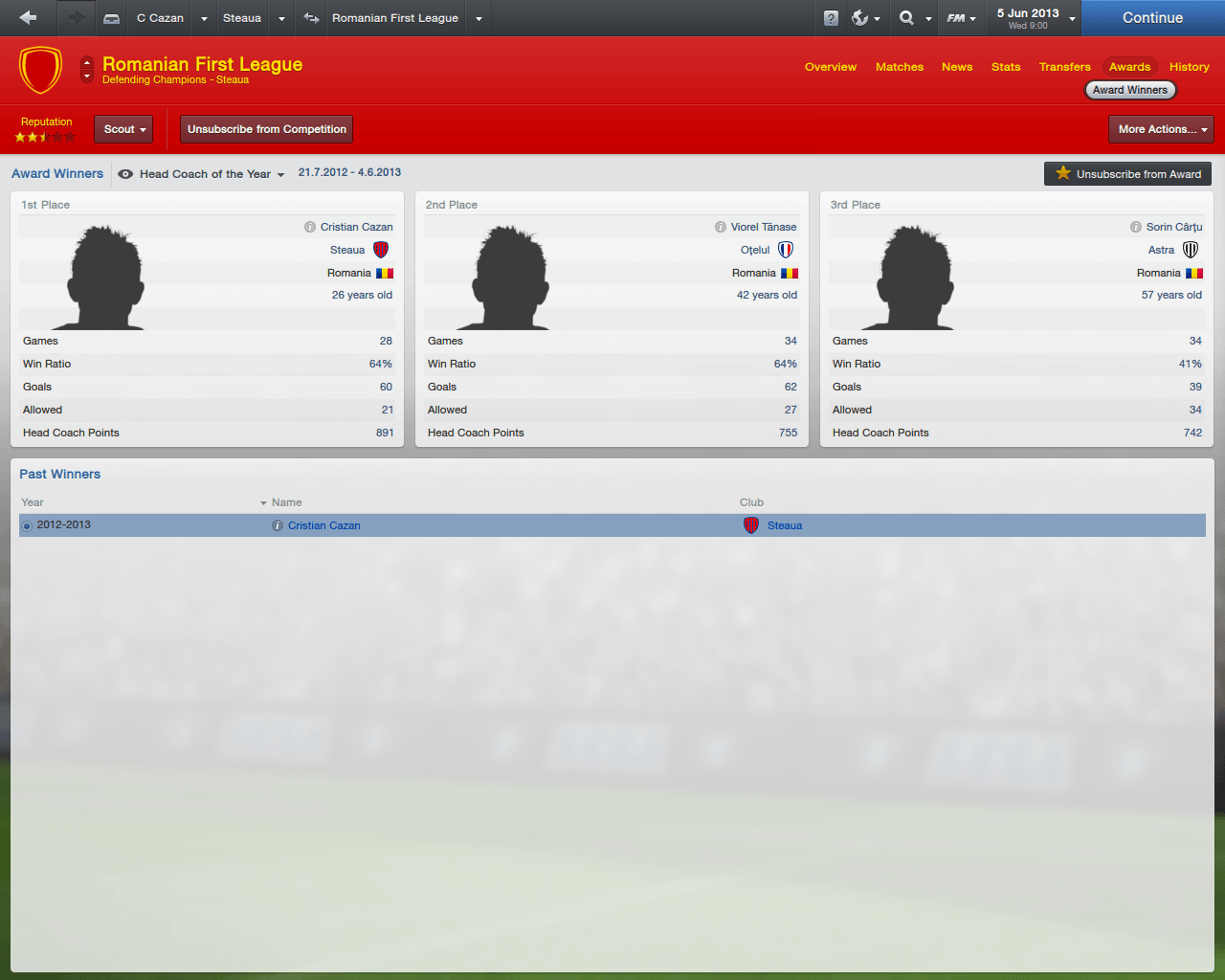 I have also signed a new contract for 4 years, with a payment of 5250$ per week. Not bad, could be better, but I didn't want to stretch out the contract talks. In the end, they offered me a new contract.

This is the league's final overview 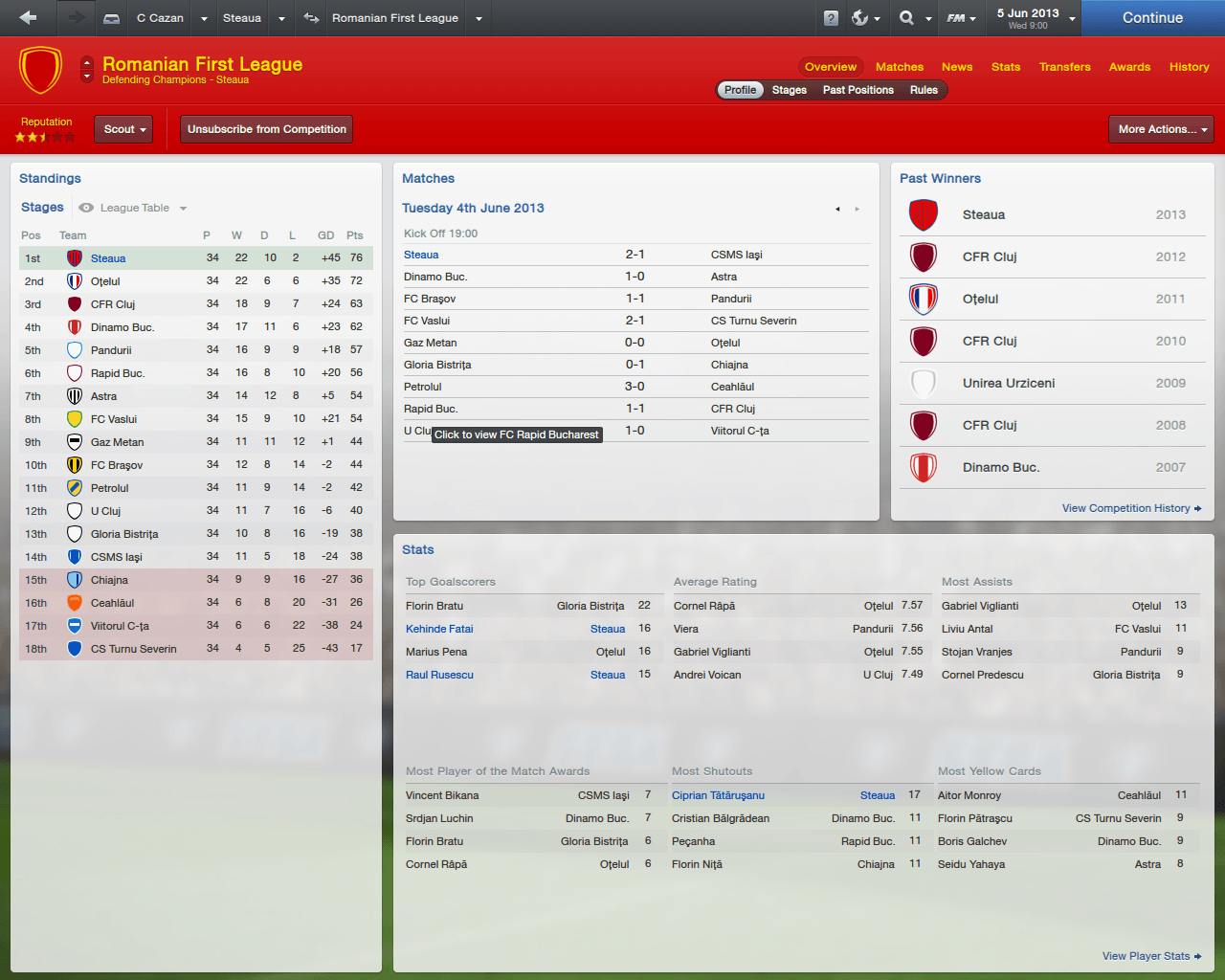 crisrko
8 years
Club awards
The club, like each season, hands over a few awards to its players. First of all, voted by Fans, ALEXANDRU CHIPCIU, is their favourite player this season. He pulled a strong serie of performances, and I congratulate him on this.

The best new player award, is won by ADRIAN POPA, almost equalized by KEHINDE FATAI. This boy has performed well this season, with a couple of decisive strikes, pass, and others. I congratulate him.

Rusescu... our golden boot. Good job boy, you made me proud. Even though I gave more importance to Fatai, you scored more than him, in fewer games. Good job.
Login to Quote

Also, in your video, the Petrolul fan deserved what he got in my opinion and it was disgraceful that the Steaua player got sent off!!

A very good story so far, keep it up