And we managed to get from 500 to 1000 in just around 26 hours, which means 1 view approximately every 3 minutes. Thanks for viewing and commenting guys.

And we managed to get from 500 to 1000 in just around 26 hours, which means 1 view approximately every 3 minutes. Thanks for viewing and commenting guys.

It has been well deserved my fellow Red. It is great to see another Liverpool story going well. Well done.
Login to Quote

"Yeah. You got those player reports I asked for?"

He placed two stacks of files on my table.

"What type of player are you looking for?"

I flipped open the first report.

"Well, I'm looking at a goalkeeper since Pepe is leaving. But we'll probably have a good amount of cash left over, so I'm looking for a player to bring a bit of magic to our attacking play."

"A striker? I thought we were only playing one striker upfront, and we've already got Luis. "

"We've already got Wellington, Oussama and Fabio. Raheem Sterling from the reserves looks like he might me ready for a few games this season too."

"They are good, but I want a special player. Someone who can really make a difference, you know?"

I opened up the second report. Report: Excellent reflexes. Good in one-on-one situations and is quick off his line. Knows where to position himself and is not bad in claiming aerial balls.

Other details: He is a France international and behind Hugo Lloris in the pecking order. Is also Congolese by birth.

"Yeah. If things work out well he can have quite a few seasons here."

"Alright, I'll make the call and tell them we're meeting his release clause."

I set aside the reports of goalkeepers and moved on to the next pile, and opened the first scout report.

Report: Excellent Technique and Ball Control. Can play attacking midfield as well as central midfield and on the right wing. Can pass, cross, dribble and shoot. Excellent overall attacking player.

Other details: He's a Moroccan international but is French by birth.

Price: Is Montpellier's best player by far, but because of their financial problems, he should be available for anywhere between £13-17m.

"Call up Montpellier and ask them how much they want. This guy looks quality. He might be just what we need."
Login to Quote

Jer
7 years
Loving it mate, the best part is the reports!
1
Login to Quote


Over recent days, Michael Owen has been busy beefing up his Liverpool squad for the upcoming season.

Keeper Pepe Reina has left Liverpool for Arsenal for what is apparently a "huge" fee.
http://img.bleacherreport.net/img/images/photos/002/117/260/hi-res-159399378_crop_exact.jpg

Gunners boss Arsene Wenger is known to be a long time fan of the Spaniard, and a revived move for the 29-year old has been successful. Reina won the Golden Glove all of his first three seasons at the Merseyside club, but he has made a series of errors over the seasons.

His replacement, is France #2 Steve Mandanda, who cost Liverpool £11.25m. 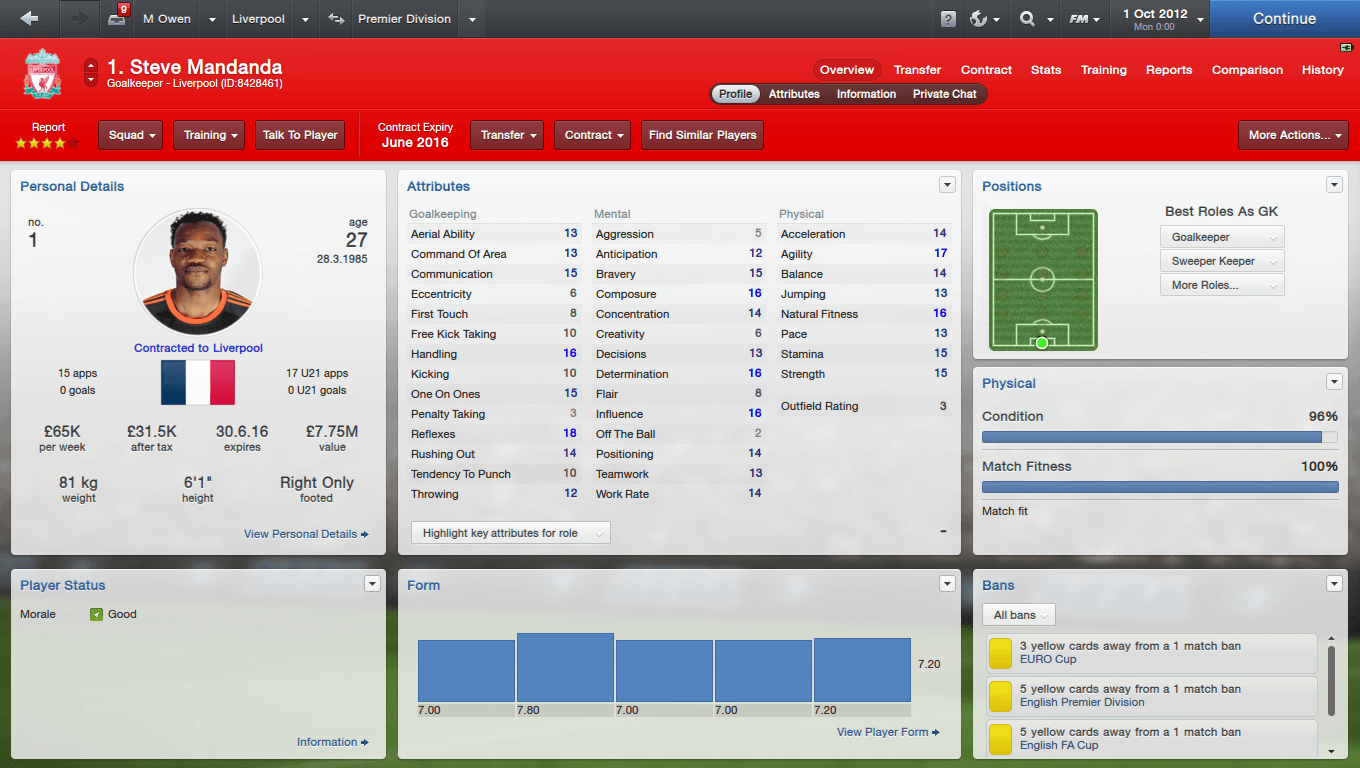 Mandanda joins compatriot Hugo LLoris in leaving France for England this summer. Liverpool fans may take time to warm up to Mandanda, as he is a Manchester United fan. Hopefully for him, his performances will convince them that he is worthy to be at Anfield.

Owen's shopping in France is not over, as midfielder Younes Belhanda was bought from Montpellier for an undisclosed fee, rumoured to be in the region of £14.5m.
http://i1.mirror.co.uk/incoming/article1501699.ece/ALTERNATES/s615/Younes+Belhanda.jpg 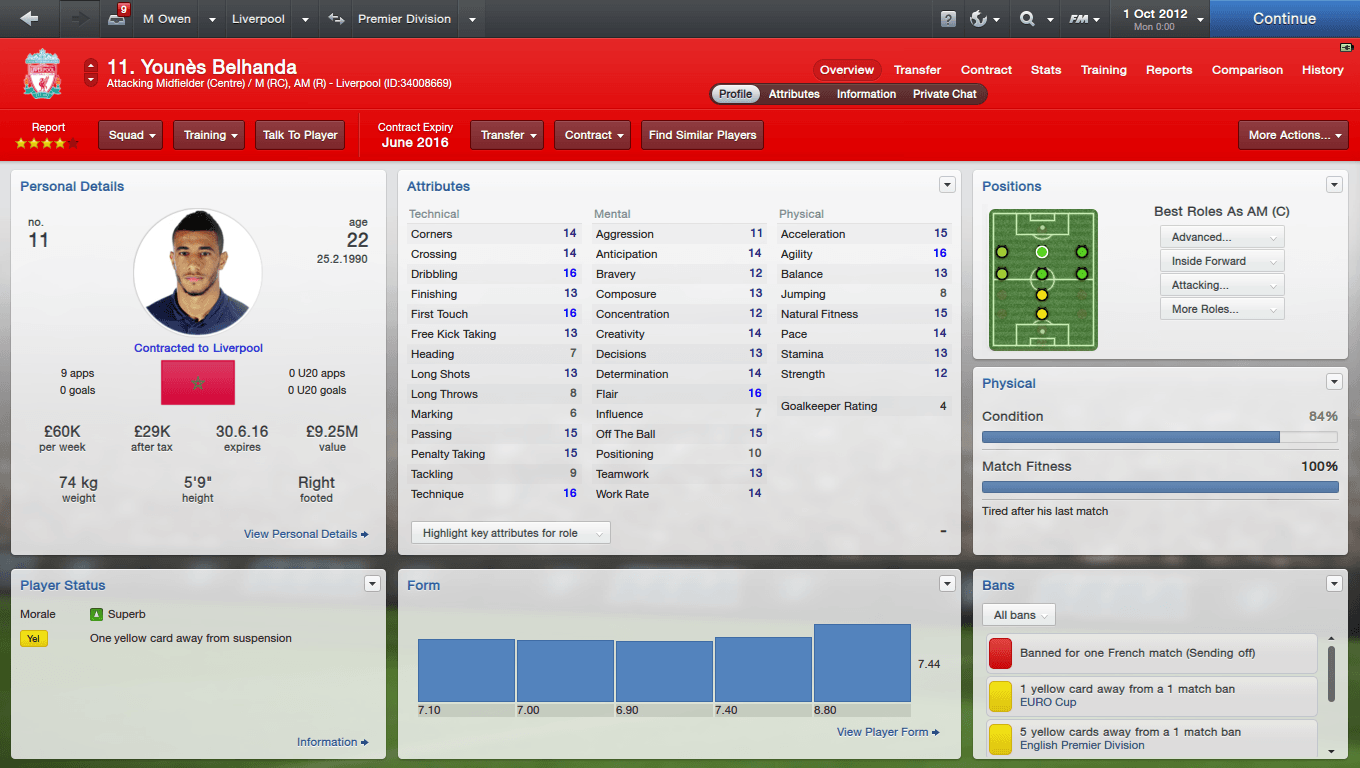 Belhanda was one of Montpellier's key players last season, alongside Mapou Yanga Mbiwa and Olivier Giroud - who joined Arsenal earlier in the summer.

Steven Caulker, who spent last season at loan at Swansea, will be a Reds player this season, having joined from Spurs on loan. Out of favour PSG striker Kevin Gameiro has been shipped off on loan to Liverpool. The French international who joined the Parisian giants only last year, was told he could leave after Zlatan Ibrahimovic and Ezequiel Lavezzi joined the club.

Scottish goalie Craig Gordon will join as backup to Mandanda, replacing Brazilian Doni, who has left to Udinese.

JasonRM
7 years
Great signings, I hope Belhanda can turn into a Liverpool legend. Looking forward to the rest of the season. Good Luck

Akash
7 years
The presentation, the crazy reports and just everything about the story shows how much you have improved as a story-writer. Keep it up and you might just be in contention for SotM

Arvind
7 years
I heard screams from outside the door.

I opened the door and saw my out-of-breath assistant manager.

"Geez, sit down. Drink some water."

We went in and Rodolfo took a breather.

"What message? From whom? What about?"

"Dave Fallows. He sent in a scout report, marked it as urgent."

"Scout report? Doesn't he know we have no money left? Our squad is gonna be as it is until January. Owner said he'll get us some funds then."

"We can't get him in January. It's now or never. Just read the bloody thing anyway. He left a message at the end."

I turned over the cover.

Dave Fallows - Chief Scout:
James Rodriguez - Attacking Midfielder/Winger - FC Porto - Age 20
http://www.sabotagetimes.com/wp-content/uploads/rodriguez1-e1353063910907.jpg
He is considered to be one of the best young prospects in the world. His amazing playmaking skills has led many to consider him to be the successor of Colombian legend icon Carlos Valderrama (who has declared him as such) thus being referred as 'El Nuevo Pibe' (the 'new kid' in reference to being the successor of Carlos who was nicknamed 'El Pibe'). His dribbling, speed, creativity, ball control, and powerful shots has been compared to Cristiano Ronaldo even to the point where he considered to be his 'South American' counterpart. His talents have been described as 'phenomenal' and acknowledged among many football experts as one of the most promising future talents in the world. His talents at such a young age has attracted teams such as Manchester United, Bayern Munich, Juventus and Real Madrid.

Playing Style : Rodriguez can play anywhere from a midfield position to a winger position. He's able to switch from either a left to a right side position as well as a center, making him a very versatile player.
Rodríguez adapts a strong playmaker role in both club and national teams. Like his predecessor Carlos Valderrama, Rodríguez plays a selfless style of passes and assists contributing to most goals at each club he's played for. While he plays selflessly most of the time, he can be selfish when needed, taking chances to score goals. Rodríguez is known to be mentally sharp, predicting certain plays, and also possesses very good reactions. While left footed, he's able to control the ball just as well with his right foot. Like Valderrama, he rarely needs to move regardless of distance and/or direction when shooting passes.
Rodriguez's comparison to Cristiano Ronaldo has been based on his mirrored style; like Ronaldo, Rodriguez is able to dribble fantastically with his head held up high. He also carries the strong trait of Ronaldo's speed and reactions with ball controlling whether moving with the ball or passing it for certain plays. This has also allowed Rodriguez a balance of goal scoring as well despite committing to a strong playmaker role. He is even a talented free kick specialist; having scored goals with free kicks as well.

Price: He's rated at £30m, and in the future will become one of the world's best. If we act NOW, he will be available for £21m.

Note to Michael: Manchester United are poised to put in a bid for this guy next week. If he joins them there's no chance we're getting him again. If he joins them, they'll be unstoppable in a few years.

"Maybe we can sell someone?"

"Like who? No way in hell I'm selling Luis. He's our best player."

"Nuh-uh. He's irreplaceable. Plus, he's out for two months, no one is going to bid for him now. Dave says we need to offer for him pronto."

"He can't be worth that much."

"Well, we bought him for 17m. Chelsea put in an enquiry last week, we could talk to them?"

"Then who the fuck are we going to play at right-back?"

"Martin Kelly, of course. Giuseppe can play back-up, too."

"Make the call."
Login to Quote

Arvind
7 years
@Madrista Thanks, so far he seems to be really good, hopefully he can keep up that form.

@Akash That means a lot Akash, :') Even though I told you to comment

Jamesg237
7 years
Risky move getting rid of Reina so early in your time at the club. I am 31 games into my third season and he has only let in 15 goals...big performances from. It will be interesting to see how your replacements do. They do look like they could be very successful.


Great story so far my fellow Red.
1
Login to Quote

Not to risky. Ive played 7 seasons with Liverpool now. With both silverware and big finale loss. After a while it seems that Reina will leave. And just as in this story he went to Arsenal.

Great buy in Mandanda. The eagerness of Reina to leave us for only £12 Mill, made me desperate to get Akinfeev, the only class keeper that was not snagged by others. So getting that much for Reina is class.

And I love this story and how you write it. Even though Owen did lose some of my respect when he left. I hope you make up for that by bringing trophy's to Anfield, Liverbird

Blue
7 years
Mandanda is a great signing, I have him on my Arsenal save! The other signings are good too, looking forward to the season

AlexSonwild
7 years
Great story m8. I've just read all the post and your writing is incredibe

Good luck m8, I'm sure you will bring glory to Liverpool (even if I will be dispointed if G.Johnson leaves the club).
1
Login to Quote