Dortmund were founded in 1909.The Borussia at the start of their name comes from the near by brewery called the Borussia. 4 years after they were founded they started to wear the Black and Yellow that is known all around the world so well. The war disrupted this their football, however it was in this time where their lethal rivalry with Schalke was started. Their first first division title came in 1956. They then had an up and down 35 years, however they became a driving force in Europe during the 9O's. In 92 they hired Otmar Hitzfeld. He led them to 2 Bundesliga titles and a Champions league success. Despite all of this it all went wrong for them in the 21st century because of lengthy financial problems. After many painful years 2008 was to be a turning point with the appointment of Jurgen Klopp. He then led them to back to back Bundesliga titles and they are now the European force that the were in the late 90's.
Login to Quote 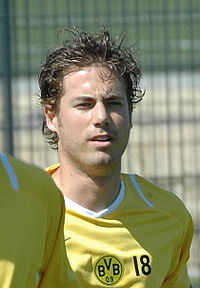 Who is Lars Ricken?

Lars Ricken is a Dortmund legend. He was born in Dortmund. He joined the Dortmund academy at a very young age and spent his whole professional career there. He was part of the glory side from the 90's, playing in the back to back Bundesliga titles of 95 and 96. More importantly he came on as a sub in the 1997 Champions league final against Juventus and scored a screamer within just 16 second of coming on. A loyal midfielder and a true Dortmund legend.
https://www.facebook.com/123259623243/videos/128389572681/
Click above to watch Lars' Champions league wonder strike.
Login to Quote

Louis O.
8 years
Nice start, will be interesting to see how well you do.
Login to Quote

Sky sources tell us that Dortmund manager Jurgen Klopp has left the Signal Iduna Park due to an argument with the board over transfer funds. In a recent interview he told the world he had done everything he could have done for the club and that he hoped the board made the right decision for the new manager. The board say he has left over the argument rather than what Klopp said he had left for.
This poses the question of who the new manager will be. Their have been rumours that club legend Lars Ricken will take over at Dortmund, however many others are linked with the job.
Login to Quote

Jamesg237
8 years
This should be an interesting read. I have always been interested in doing a Borussia Dortmund story as they end up with some amazing regens. Good luck for your story with them.
1
Login to Quote

should be interesting. Also, I agree with James. Dortmund have some beauties on my Milan save.
1
Login to Quote

It is confirmed that Lars Ricken has been hired as the Dortmund manager. He held his press conference earlier today. He said that he wanted to pick up were former boss Klopp left off. He also revealed that Klopp had been angry with the transfer budget of only 2.6 million euros. When asked what he could do with this budget Ricken said that the Dortmund fans would have to wait till January for some new signings.
Login to Quote 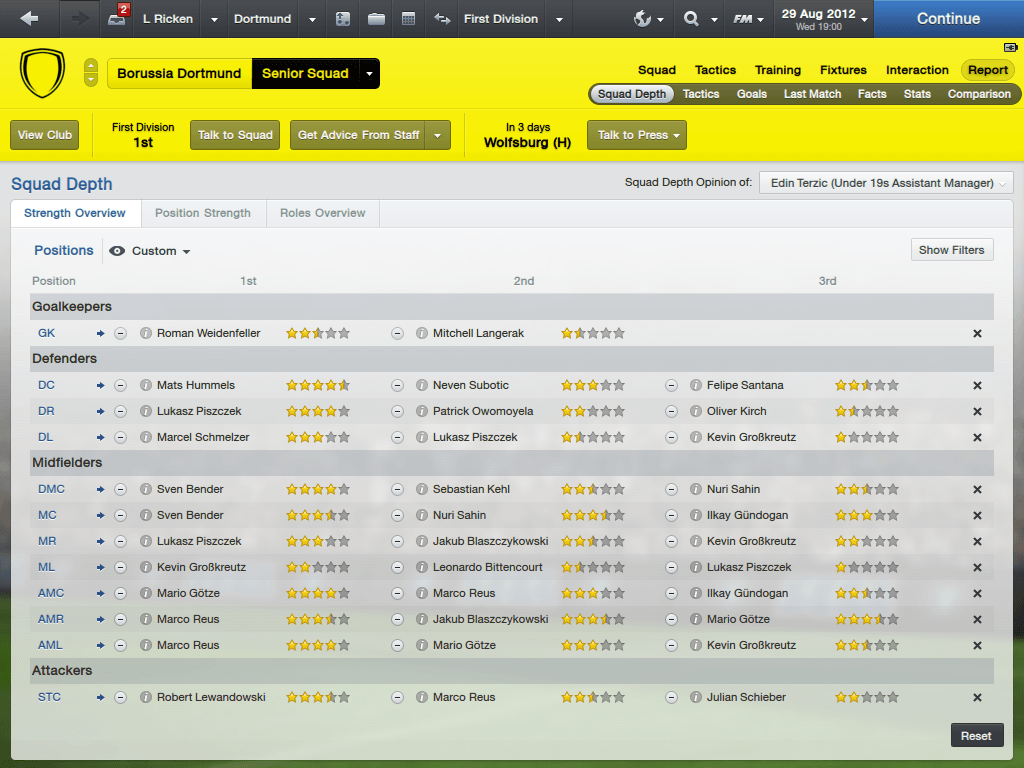 As you can see my Key players are Lewandowski, Reus, Gotze, Hummels and Piszczeck
Login to Quote

An ok pre-season. A little disappointed to lose on penalties in the super cup but overall we can be happy with most of the results.
Login to Quote

Seni
8 years
You've got a very good squad. Don't sell Gotze! You can sell Lewandowski though :p
1
Login to Quote


Barca were rumoured to offer 29 million for Lewandowski but the bid never came. I would have accepted straight away
Login to Quote

Player of the month
With 6 goals in 3 games it could only be given to Marco Reus. The German international terrorized defences all around Germany, whether he was playing on the left, right or up front. All of his 6 goals have been fantastic finishes and against Wolfsburg he scored a delightful free-kick from 30 yards out. He has been phenomenal

A fantastic month. Scoring 17 and conceding only 1 in three games is fantastic. With players like Reus and Schieber taking the headlines, we must not forget our rock solid defence. The only goal they concede was a pile driver from long range. The midfield also play their part. However one man in particular caught the eye in the middle of the park. Nuri Sahin got 3 assists agains Furth and 1 against Wolfsburg. In other news the Champions league group stages were drawn and we have been matched up with Olympiakos, Copenhagen and Chelsea. The first game being away at Stamford Bridge.
Login to Quote

Louis O.
8 years • Edited
Schieber seems quite good, I expected Reus and Lewandowski to be better than him ( and Reus appears to be).
Login to Quote


7 mins : Corner to Chelsea. It is hit towards the near post, headed away by Santana but only as far as Azpilicueta. He plays a nice inside ball to Oscar . Oscar sets himself for a shot. Schmelzer makes a desperate attempt to block the shot, however it goes through his legs and into the bottom corner of the net. 1-0 to Chelsea.
10 mins: Corner take by Hazard. It goes towards the near post, Ba comes running in, gets ahead of Santana. Weidenfeller's in no mans land and the ball bounces over the line. 2-0 to Chelsea. Oh dear.

21 mins: Azpilicueta with the long throw-in. Ba races in and gets their first. He carefully glances the ball towards the far post. His second of the game.3-0 to Chelsea. Dortmund are sinking without a trace.

60 mins: Schmelzer plays the ball to Reus. Reus is tackled hard by Ivanovic, but it falls to Grosskreutz on the edge of the area and he carefully guides into the far post with his weaker right foot.3-1

71 mins: Out of nothing Oscar is through because of a lovely pass from Frank Lampard. Schmelzer does well to catch up with Oscar. Now Torres is making a run. Oscar finds him. Then comes a terrible defensive mistake. Santana and Hummels both run over to him, leaving Ba all by himself. He then smashes it in to the goal for his hat-trick. Chelsea have done by some margin. 4-1. Chelsea seal the win.

Man of the match: Demba Ba

Jer
8 years
Great start, this should be interesting!
1
Login to Quote

You are reading "Dortmund: True football is yellow".