Rablador
8 years
I REFUSE TO COMMENT AGAIN!!!!
DAMN, MY PLAN HAS FAILED!

Another nicely written update, you gotta let me in on these secrets - how are you so good!?!?!

tbendis
8 years
It looks like I won't be winning SotM again if this story is nominated. How many home-grown players do you have? THAT doesn't look that promising.
Login to Quote

And hey, I have 5 players home grown at Inter and 10 home grown in Italy in the first team! I have many more in the youth systems.
Login to Quote


Thank you all so much, 800 replies is such a huge milestone, not many stories ever make it this far. I want to thank all of my readers for motivating me to keep going and stick with this story. Here's to 800 more!

The Kings of Calcio 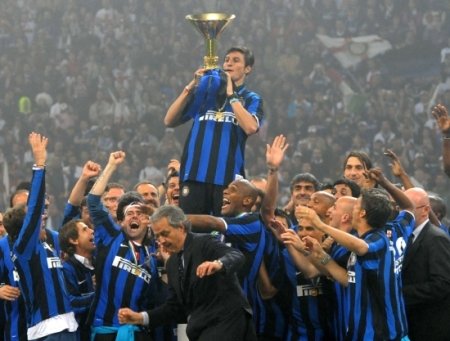 Inter traveled to the capital city of Rome knowing that even a draw against SS Lazio would mathematically secure them the title. Nobody had ever won Serie A with 6 matches to go, and especially not 3 days into April. As we know, however, ever since club legend Giuseppe Bergomi took charge of the Nerazzurri on a managerial basis, Inter have been all about breaking records.

Lazio, however, certainly wanted to play the party spoiler and put off Inter's fourth successive Scudetto win by at least another week. They also had a dire need of points, dragged into a relegation dogfight they'd never expected and only a few points clear of the drop zone.

The match kicked off full of expectancy at the Stadio Olimpico as thousands of Inter fans eagerly awaited their club to secure the title. Francesco Guidolin set up his Lazio side in a very defensive 5-3-1-1 to Inter's expansive 4-3-3 and it was the reigning champions who set the tone early with Sterling smashing his shot wide.

It was the league's reigning and current top scorer Mattia Destro who broke the deadlock in the 32nd. Raheem Sterling hammered in a cross from the left and the Italian goal machine got off a glancing header straight into the corner.

Inter picked it right back up after the break as Xherdan Shaqiri whipped his free kick just wide of the post in the 66th. Controversy followed soon after, however, as referee Russo awarded Lazio a penalty in the 82nd. Giuseppe Bellusci was sent off in the process.

Alvaro Gonzalez stepped up to win Lazio a vital point from the penalty spot but backup Slovenian keeper Vid Belec made a stunning save to keep Inter ahead. It went from hope to heartbreak for Lazio fans as Inter sprinted down the field. Maxime Gautier chipped in a delightful ball for Destro to poke home.

The celebrations began in the blue and black half of Milan as the match ended soon after, Inter winning 2-0. The fans that had made the trek to Rome poured onto the pitch. Bergomi, a usually stoic character on the sideline, ecstatically jogged onto the pitch to celebrate with his players.

For a fourth time running, Inter are the kings of calcio.
Login to Quote

I think I see a treble on the cards this year!

Louis O.
8 years
Well done getting 800 replies, would you have oer 1000 if it weren't for the 'Blackpool Shenanigans'?

Walter
8 years
Great work on the title. Inter are one of my favurite teams and it is good to see you changing their fortunes in game

Nathaniel
8 years
Nealy! Superb updates of late, sorry I haven't commented! Also loving the title change! Rise of the Nerazurri was good but King of Calcio is better!

Considering Wells, Walt and P-Kiddy have stopped there story and mine has had like no updates, its you versus Bendis for SOTM! May the best man win!

Verdinho
8 years
One more in the bag for Mr Bergomi. This story is royalty

Neal
8 years
The Madridista: I can feel it, too, I really think this is the year

Louis O: Yes Louis, I had 217 replies on that story

Nathaniel: Thanks mate, yes I hope I get nominated this month. I am 100% certain that I'm the only story to have had so many replies with only 1 SotM nomination xD

P-KIDDY: "Royalty" just as I change my title to "King of Calcio", I see what you did there