Overall, I thought our pre-season went relatively well. We brought some good players, in and didn’t lose anyone else important. However, the results could have been much better, although I’m not worried. Those results were merely trying to bed in one of our backup tactics, and I’m looking to implement the 4-5-1 tactic in competitive matches anyway, so we should be fine once the proper season starts.
Login to Quote

Fairly average pre-season, hopefully you can do better in the upcoming season.
Login to Quote

Kane
8 years
A decent pre-season, but some results weren't great. Nevertheless, you can definitely work your Matthaus Magic and change it all. Can't wait for the season to start!
Login to Quote

Blue
8 years
Glenn T: I made that clear in the post

my assistant was in charge, blame him!

we can't forget that my two pre-seasons with Sporting last time were awful! I lost to Huddersfield twice I think!
Login to Quote

Toon
8 years
Some good results, some not so good. The Newcastle one was a very good result indeed.
Login to Quote

Deleted
8 years
Can't wait to see the season start. I wonder if you'll be as dominant as last time
Login to Quote

KingPadster: Based on the results that you lot haven't seen yet, it's going to like last time!

The Special One: Keep up lol

Matthaus: “Carrillo Will Be Key” 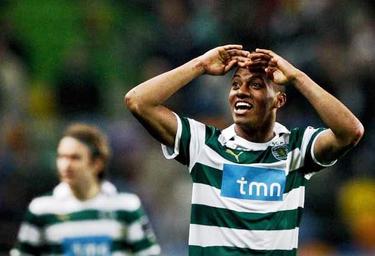 Sporting Lisbon manager Lothar Matthaus has started trying to empower his team to look onwards towards the new season in the hope of motivating them to fight for every game. He’s started off by claiming that Peruvian winger Andre Carrillo will be key to their fight for domestic and European glory this season.

Asked by one of the German journalists who has taken a keen interest in Matthaus’ adventure in Lisbon who he thought would be a key component of Sporting’s side this season, Matthaus replied, “it’s always hard to answer a question like that. At some clubs it’s easy, where they have 1 or 2 stand-out players, but at clubs like here at Sporting, it’s much more difficult, as we have 7 or 8 very good players in the squad. I think though, Carrillo will be very, very important to our side this season, especially as all my tactics involve wingers. He’s got all the important qualities needed really. He can dribble and cross, he’s got pace to beat most defenders in the league and he’s never tired. For a player at such a young age, you couldn’t really ask much more. How he links up with Capel on the opposite wing will also be important, as they could form a very good partnership together. No matter how good Carrillo is, we can’t take away from the rest of the team, who are also very good, otherwise we wouldn’t be in the position we’re in now.”

This will be Carrillo’s second season at the Estadio Jose Avalade, after he moved to them for £1.1m last summer from Alianza in Peru, where he had spent three seasons, making a handful of appearances. Despite his young age of 21 years, he managed to rack up 24 league appearances for Sporting in 2011-12, and scoring twice. He has also made three appearances for Peru’s senior team, including at the 2011 Copa America, where his country came third. He is expected to have a bright future with both Sporting and Peru, with many of Europe’s top clubs following his development.

Matthaus was speaking in one of his first press conferences as Sporting manager, and his first before a competitive match. He has tended to shy away from press conferences so far in his time with O Leoes, with all his others being to introduce himself as manager and to announce a couple of the summer signings. At other opportunities, he has tended to send his assistant manager, Oceano Cruz, to do his press work for him, and this is understandable given the controversy he has caused in previous jobs as a manager.
Login to Quote

OnTheBallCityNCFC
8 years
I did a save as sporting and Carrilo was immense. Loving it so far Blue
Login to Quote

Blue
8 years
OnTheBallCityNCFC: I know, he was awesome on my last one too haha! Thanks for reading

KingPadster: I know haha, thanks for reading