Toon
8 years
Miller is a genuine legend!
1
Login to Quote

Toon - Why yes. Yes he is.
Login to Quote

Paul Anderson: Amod will take us up


"He has been a revalation. Our morale was down after two consecutive season in playoff spots without success, but I speak on behalf of the team when I say that he will take us up to the top."

These words come from Nottingham Forests star winger, Paul Anderson. He spoke to a journalist after the game against Birmingham in which they won 3 - 1. It was there 11th match without defeat.

"For his first managerial job he is doing great. Although it is only the end of October, we are first. We have a one point lead and we need to maintain it. Obviously that will be hard, especially in the next few matches as Joel (Lynch) is injured and Lee (Camp) is banned. But we need to keep our faith, and we will make it."

"Yeah it was tough getting so close to the Premier League and being knocked out. Twice. After last season we all doubted whether we would make it, but Amod has given us belief."

Anderson joined the Reds in 2009. He has been in fine form this season, assisting 14 times in as many matches, and scoring 6 goals.

Mickzter97
8 years
It has come to my attention that something has happened to this story...
IT HAS 500 views! Thanks everyone, here's to the next 500!
Login to Quote


Last month went extremely well, and we established a lead on the log. We are also in the Quarter Finals of the Capital One Cup, which was my expectations, and further than what the board expected. Could we extend our unbeaten run of 14 games? Lets see.

Man of the Match – Radoslaw Majewski

This was a good win, and we were favourites. But I was weary of Southampton as they have a good side. Miller scored, yet again. His form is sensational. Majewski had a very good game, completing 33 out of 33 passes and getting an assist.

Man of the Match – David McGoldrick

This was a sensational performance. Robbie proved to me why he should be playing more matches after scoring in the 2nd and 20th minute. Hull managed to pull back one before the break, but Wes Morgan slotted in his 7th goal of the season. McGoldrick then scored another two before Hull got a consolation penalty.

Good result and the first time in EIGHT games where we didn’t concede a goal. Soumah has been playing great recently, and now has another goal. And of course, Miller just had to score, twice. Our unbeaten run was now 17 games!

This was our chance to get a 6 point lead ahead of West Ham. But our attackers didn’t create many chances. In the 66th minute Nano scored for West Ham after some poor defending. We still have a game in hand, but we only lead by goal difference – we are 9 goals ahead.


Live at the City Ground


Welcome ladies and gentlemen to the Quarter Final of the Capital One Cup. And today we have the battle of the cup underdogs – Nottingham Forest against Blackpool. While many of us will be watching the Premier League teams, one thing I can guarantee you is goals. Nottingham has already scored 47 goals in the league and Blackpool has scored 30. This is set to be a killer match.

And in the team news for Nottingham, star striker Ishmael Miller and captain Luke Chambers both will not start as they have an automatic one game ban because they both have 5 yellow cards. Miller has been sensational, scoring 21 goals in 21 appearances, and Chambers has been a rock at the back. 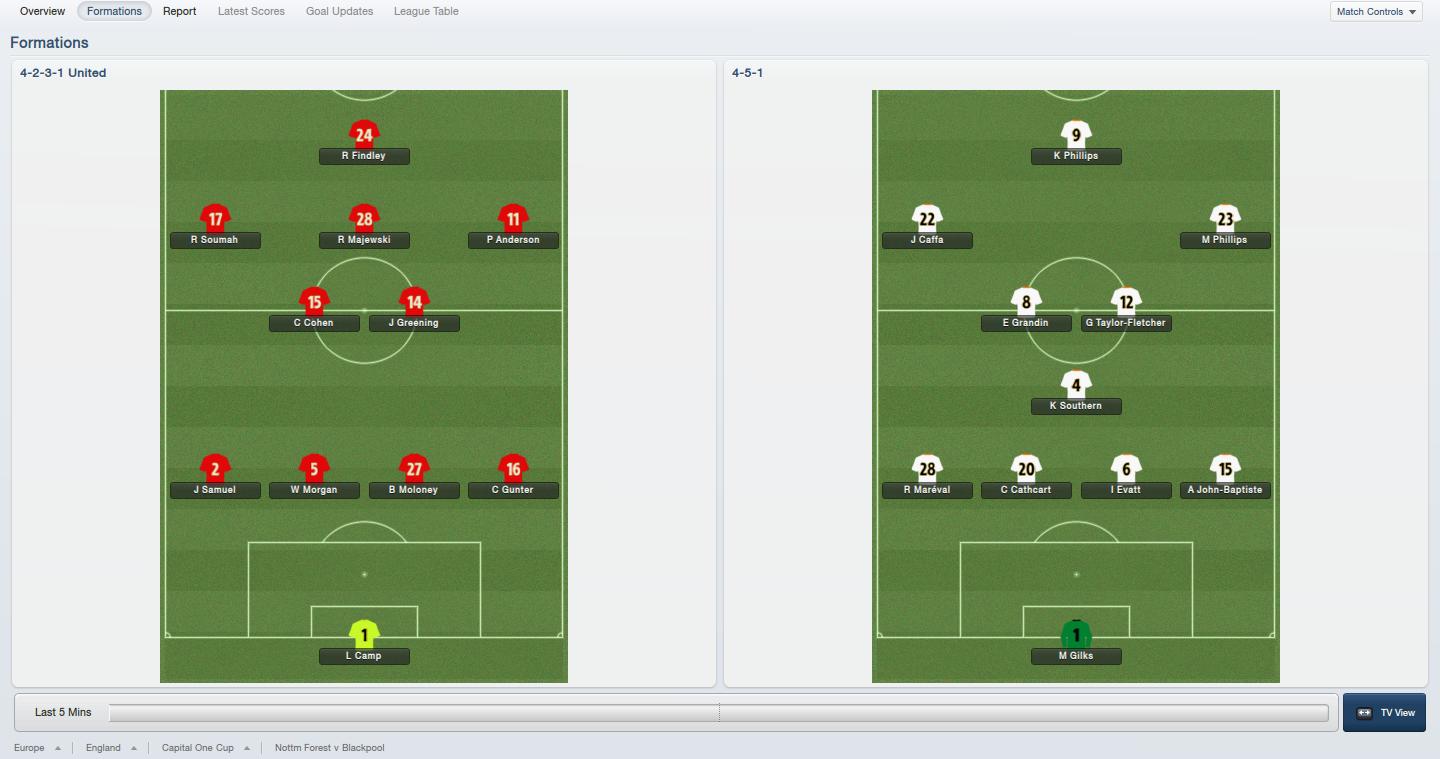 0’ – And we are off! Hopefully this will be a killer match.

23’ – Kevin Phillps receives the ball down the left flank. It’s a through ball to Caffa, he is in a great crossing position. It’s floated in the air, brought down by Matt Phillips…GOAL! One nil to Blackpool.

41’ – Here is Richard Soumah one the left flank. Passes to Greening. To Majewski. Back to Soumah. It’s sent through, Soumah cuts inside, takes a touch…GOAL! 1 – 1. What a strike.

43’ – Caffa runs down the left flank. There are a few white shirts in the box. He goes for the cross, fakes it – passes to Matt Phillips. Phillips crosses it in, chestes by Kevin Phillips, surely? Yes it’s a GOAL! Instant reply from Blackpool.

Well its halftime and already we have an exciting game. Can Forest pull off a comeback?

52’ – Fletcher is on the attack. He has two options. Sends a through ball to Matt Phillips, and he runs down the right wing. There are players in the box, he crosses it. CAFFA has headed it in. GOAL! He has had a great game today, Forest can’t handle him. It looks over now.

81’ – Soumah intercepts the ball and is now on the attack. Anderson and Findley are with him. He has the pace, but does he have the skill? He is going on his own. He is one on one, can he do it? Yes he can! GOAL! Forest are still in this. He ran 40 yards and passed the keeper, unbelievable.

91’ It’s now or never for Forest. Can they pull it off? Soumah on the ball, layed off to Samuel. He puts the cross in…ANDERSON HEADS IT IN! I don’t belive it. What a game! Forest have pulled it off. Great stuff!

We now enter extra time. What a game so far. Will they be more twists and turns? We shall see.

115’ – Findley receives the ball outside the box, fakes a shot, takes one…it hit the bar! How close was that?

NF – McGoldrick steps up for the first penalty – SCORES!

NF – Soumah who has had a great game steps up, SCORES!

BP – Djordic steps up…CAMP HAS SAVED IT! Forest have the upper hand.

NF – Anderson to give Forest a further lead…HE’S DONE IT! Pressure is on now.

BP – Fletcher calmly steps up…pressure is so high. But he SCORES!

NF – Marcus Tudgay can make it very hard for Blackpool…HE MISSED! That went right over. Oh my word football is cruel.

BP – Angel can save Blackpool here…CAMP HAS SAVED IT AGAIN! I don’t believe it.

NF – This is it, Lewis McGugan can win it for Blackpool…Oh no he has hit straight at the keeper. This is shocking. Forest have given up their advantage. If Blackpool score it’s sudden death.

BP – Southern can save Blackpool here…he has. My word is football unpredictable.

NF – Now its Forest’s 9th penalty! Chris Gunter steps up…the crowd chant his name…the pressure must be deadly…he steps up…He has hit the bar! Oh it could be all over now for Forest.

BP – Ian Evatt can send Blackpool through with this…And he scored! It’s over! It’s over! What a game! This was a real rollercoaster.

Well ladies and gentlemen that was one heck of a game. See you next time.


We started the month off well, but I was disappointed with the West Ham loss. We didn't make enough chances. The game against Blackpool was heartbreaking. Ah the joys of being a manager. 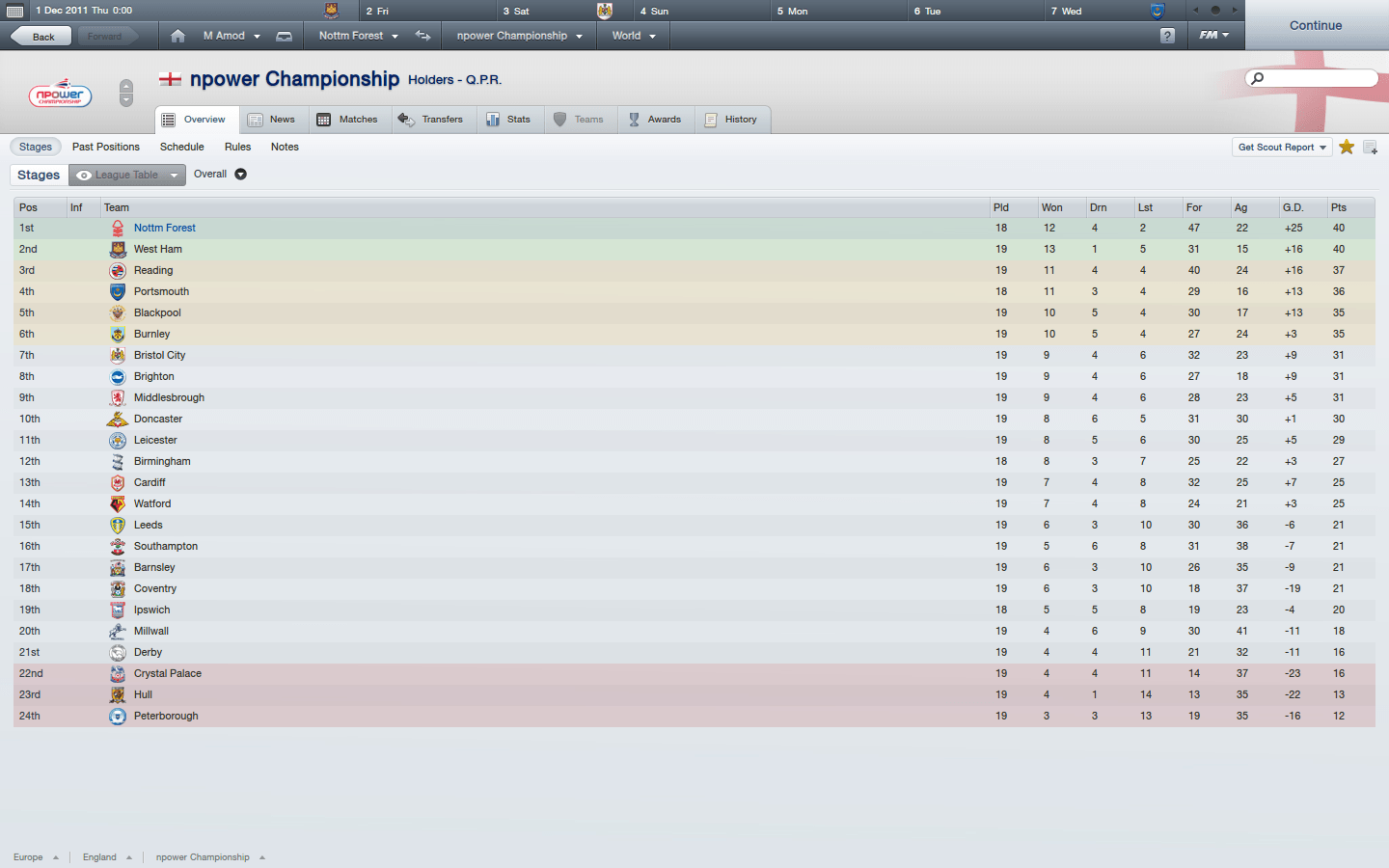 We are still first, but only by goal difference. We also have a game in hand.

Player of the Month - Ishmael Miller

A fabulous month for a fabulous player. 21 goals in 21 games - he could break Forests record of goals in a season - 37

Goal of the Month - Richard Soumah

A 91st minute equalizer against Blackpool. He ran 40 yards through the defence and slotted it home.
Login to Quote

You are reading "[FM12] Nottingham Forest - Rise of the Reds".