Obi has taken over Mansfield Town just in time for the annual youth intake. Luckily for Obi Mansfield have Top training facilities and Top Youth facilities so therefore Mansfield will expect great players coming through. I wouldn’t be surprised if there were players with the potential to play in the Premier league coming through their youth right now.
Here’s a link to Devil’s thread with the challenge on, go have a look and see if you can take a terrible team to success by only using youth- http://www.fmscout.com/q-8713-Possible-Challenges.html
Login to Quote

Stocke
8 years
Can you post a screenshot of the youth team?
Login to Quote

LFCsedso
8 years
Well you have to be creative, i will in due time Yuttra.
Login to Quote

LFCsedso
8 years
Here is a screenshot of the Under 18's. Try and guess what league each player has as a potential at the minute. 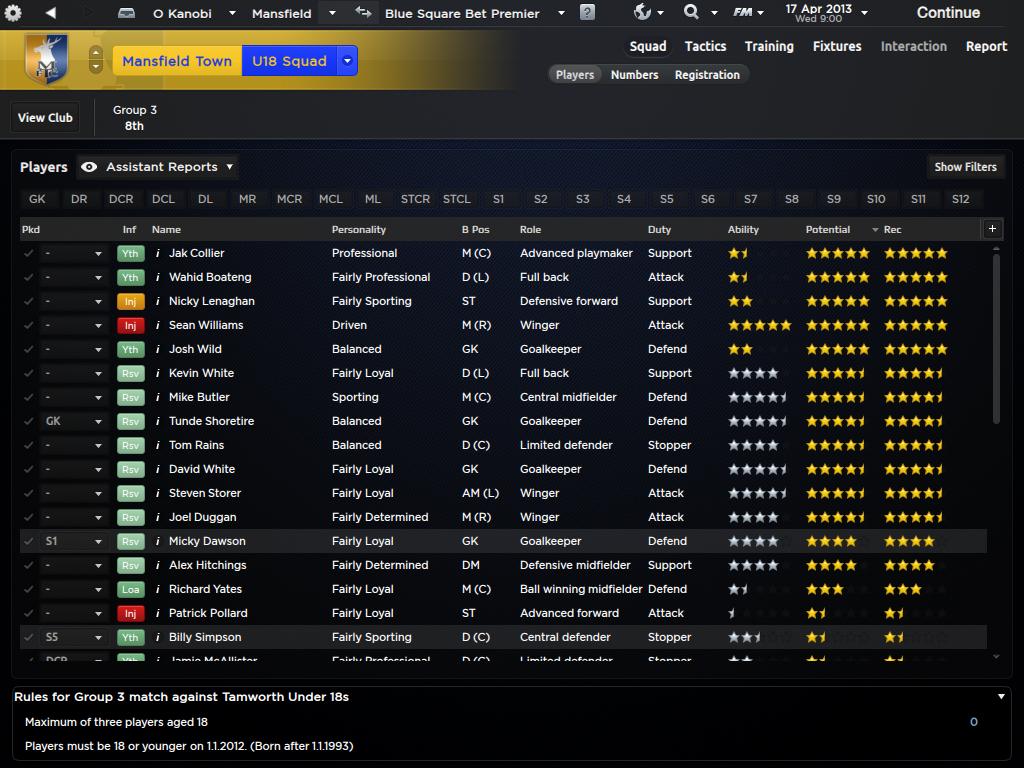 Youth team assessed and most were bought (Part 1)

Obi signed many players that came through his youth such as Wahid Boateng, Sean Williams and Josh Wild. So speaking of Mr Boateng here he is. He is a English left back with the second nationality of Ghanaian.
Stats- 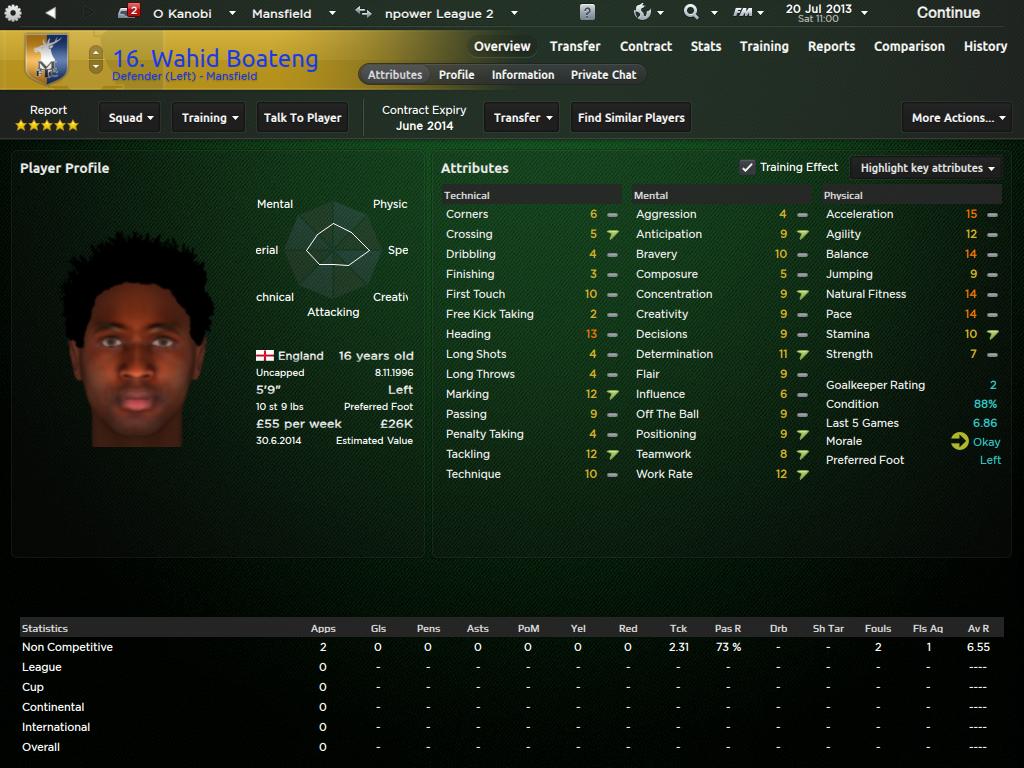 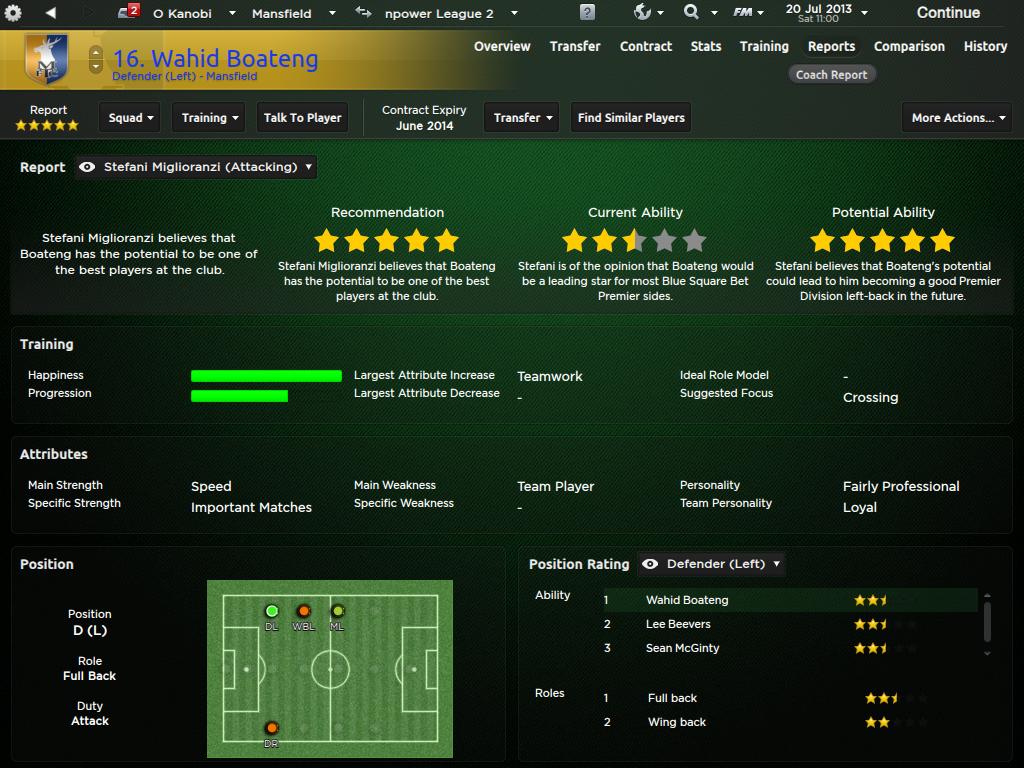 As you can see he is a brilliant player for the level Mansfield are at and his potential ability is that he can become a good Premier league player. Although he can be a bit selfish on the ball but can make great tackles to take players off the ball.
Next up is Nicky Lenaghan who is a striker but can also play as a right midfielder. He is a team player and has great stats for League 2 already.
Stats- 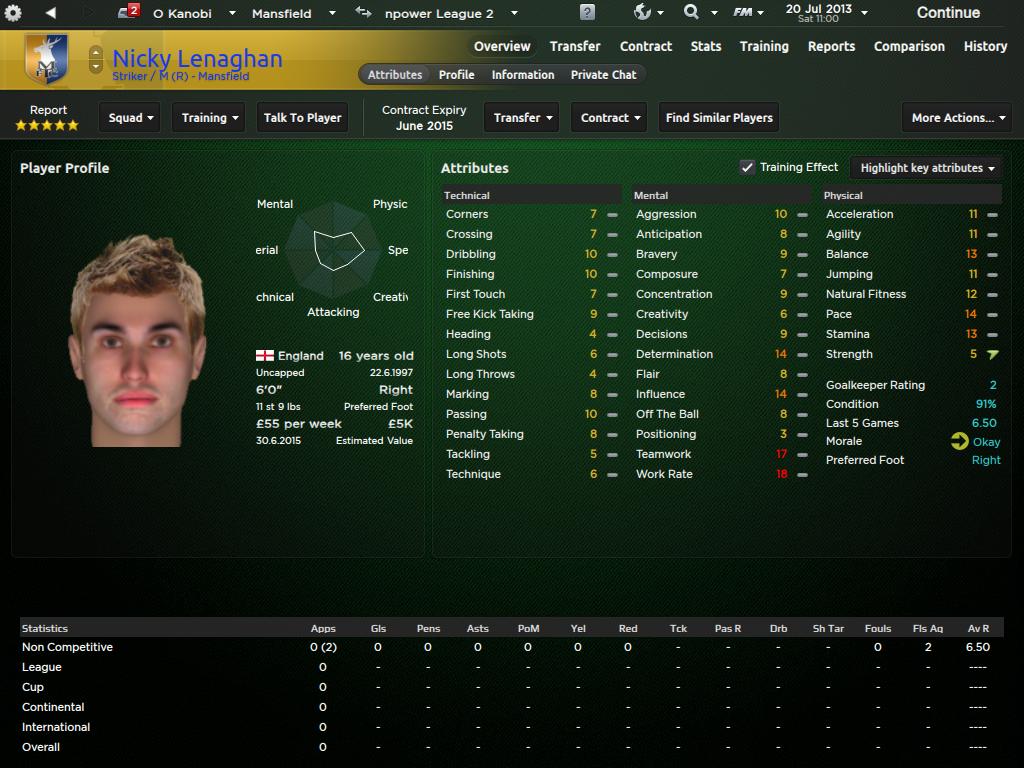 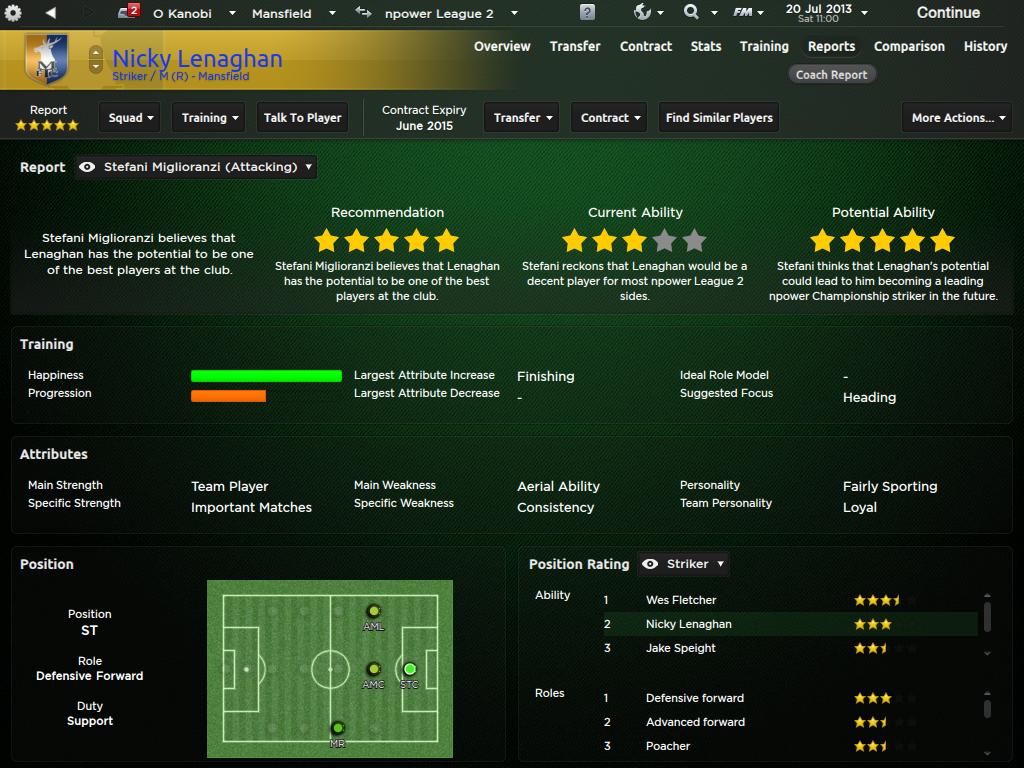 As you can see he can become a leading championship player and he is great in important matches and hopefully for Obi will be a great goal scorer. Unfortunately Nicky’s best role is a defensive forward and they don’t score many goals do they?
Next up is the amazing Sean Williams who has already sparked interest from clubs such as Manchester United and Manchester City. He is a right midfielder with excellent stats. He is English but is quite slow so he might find it difficult to dribble past the opposition.
Stats- 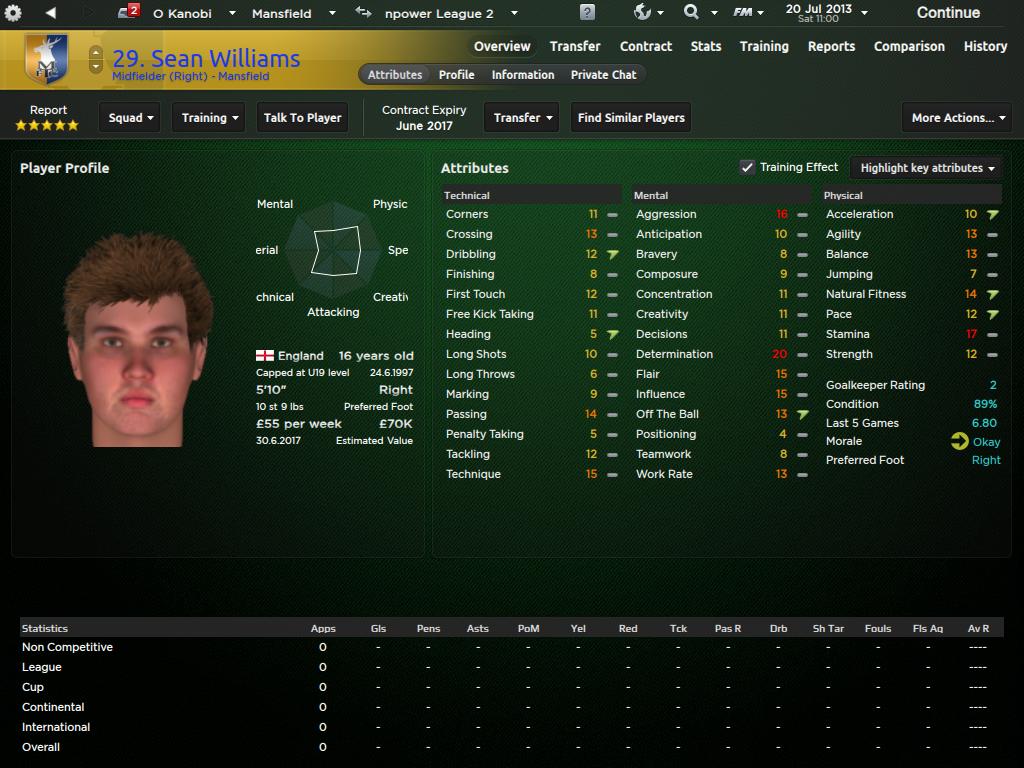 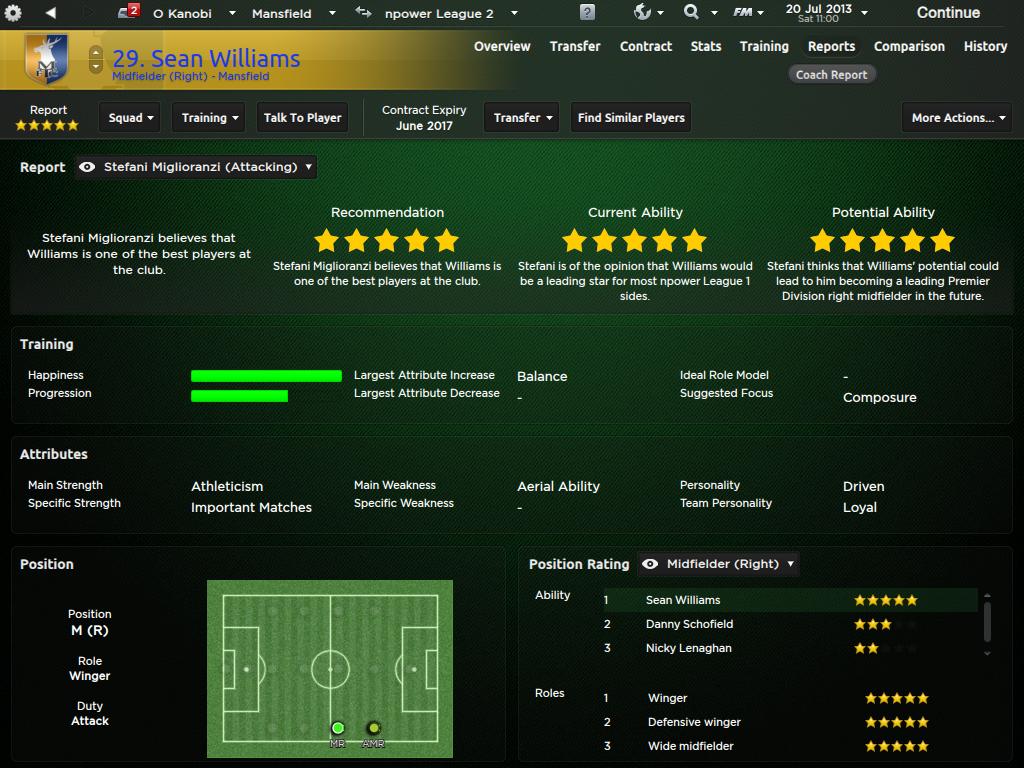 He is already a leading league 1 star and has the potential to be a leading Premier league player. What players Mansfield have here and there’s no surprise top teams in England are interested in him!
Next up is Josh Wild who has also sparked up interest from the same clubs as Sean Williams. He is an English goalkeeper who is already excellent.
Stats- 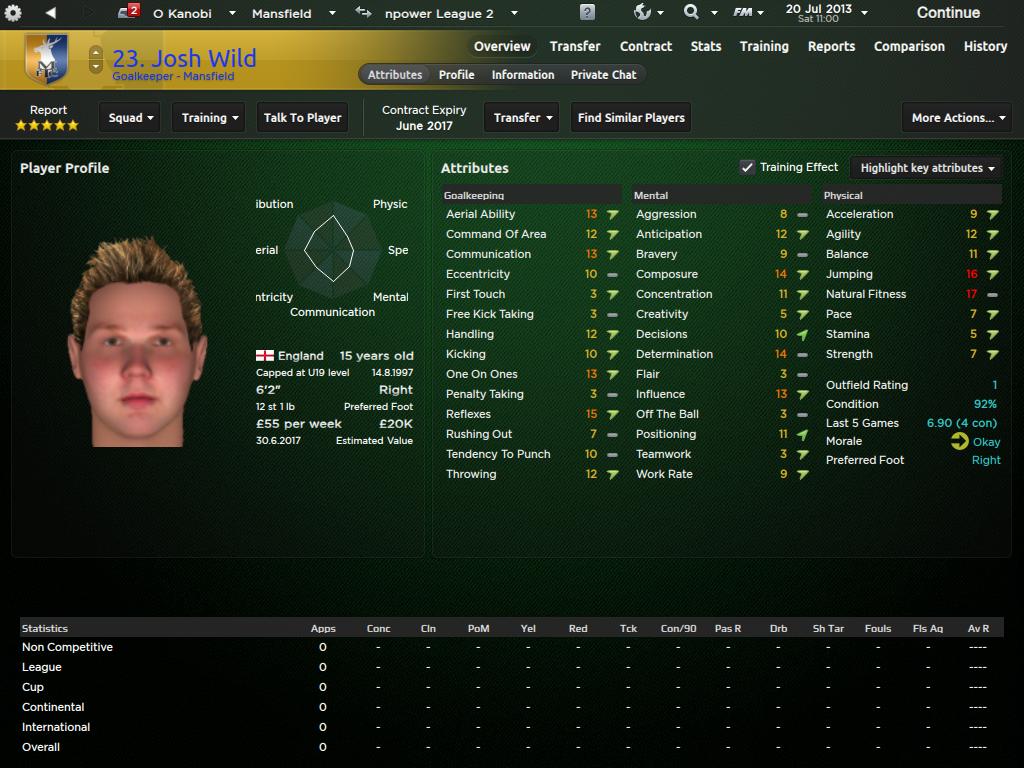 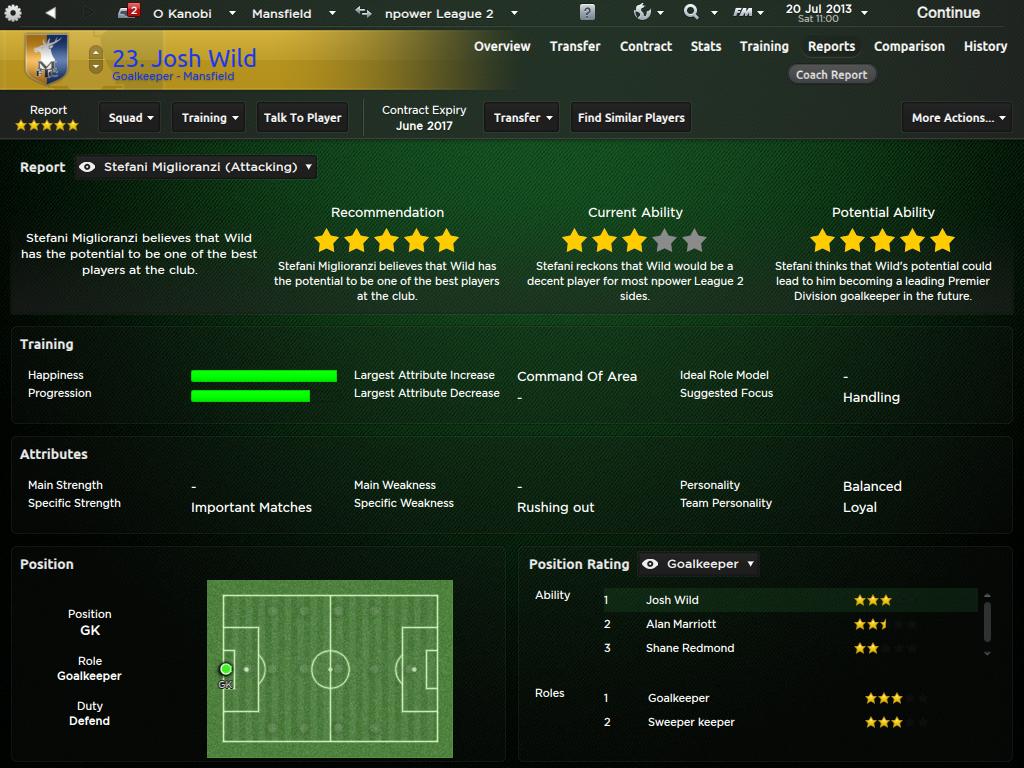 He is a decent player for most league 2 teams and can become a leading Premier league player. Obi must be so proud of the youth facilities for bringing such quality players in! He has excellent stats and should be the next England goalkeeper.
Login to Quote

Stocke
8 years
Nice to see that you have five youth players with a potential of 5 stars (even some that will hopefully become leading Premier League players!), hopefully Sean Williams's injury isn't too bad.
Login to Quote

Youth team assessed and most were bought (Part 2)

Obi’s next signing was Jak Collier a centre midfielder who can also play in defensive midfield. He is English and at the minute is injured for 7 to 8 months but that is no surprise as he is injury prone. Why would a manager buy someone that is injury prone?
Stats- 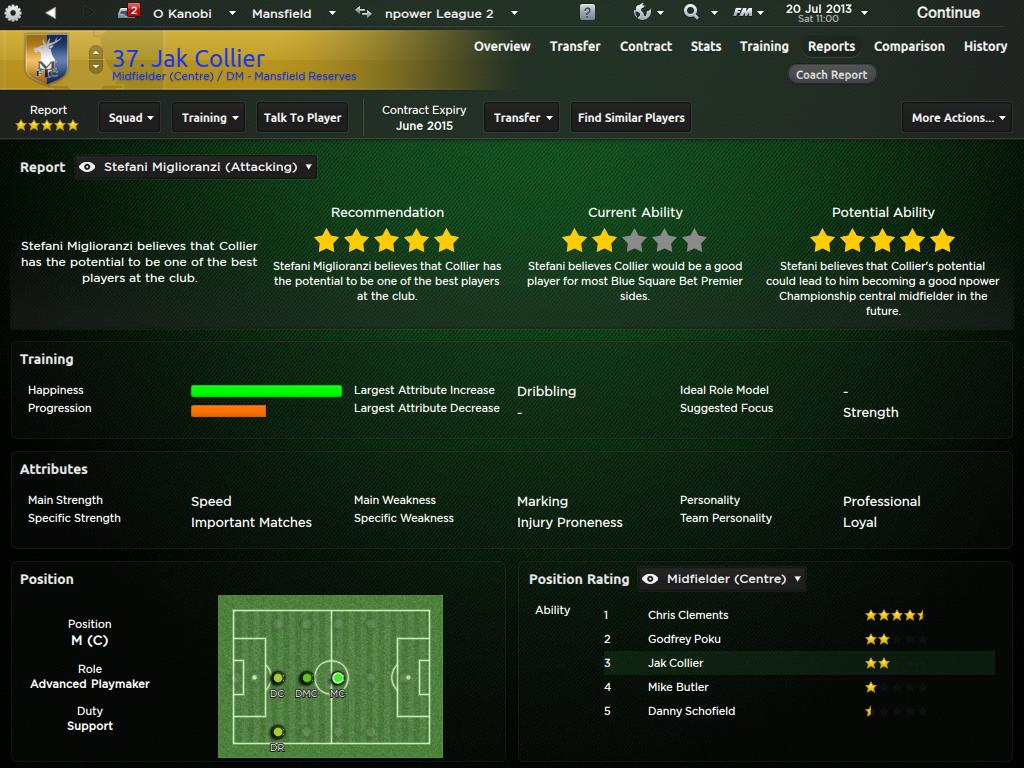 He is a decent Blue square premier player so I doubt Obi will be playing him as a regular in League 2. He is a decent player and can become a leading Championship player.
Next is Kevin White who can play in most positions down the left hand side of the field. He is English. He looks like a good prospect for most teams in England.
Stats- 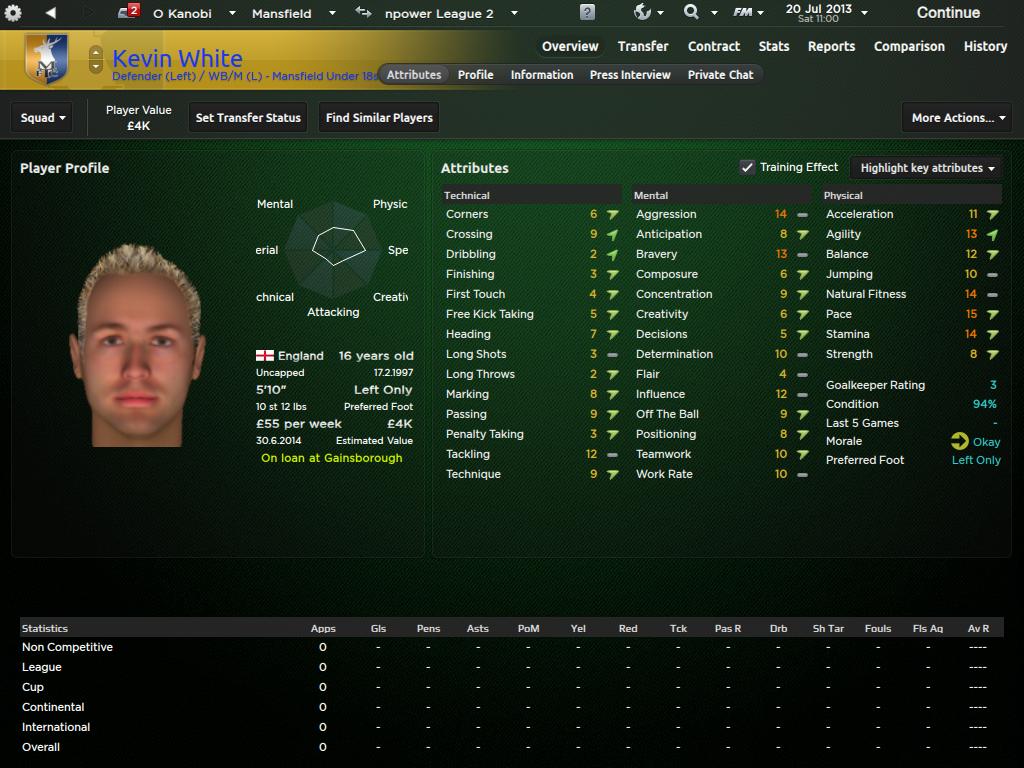 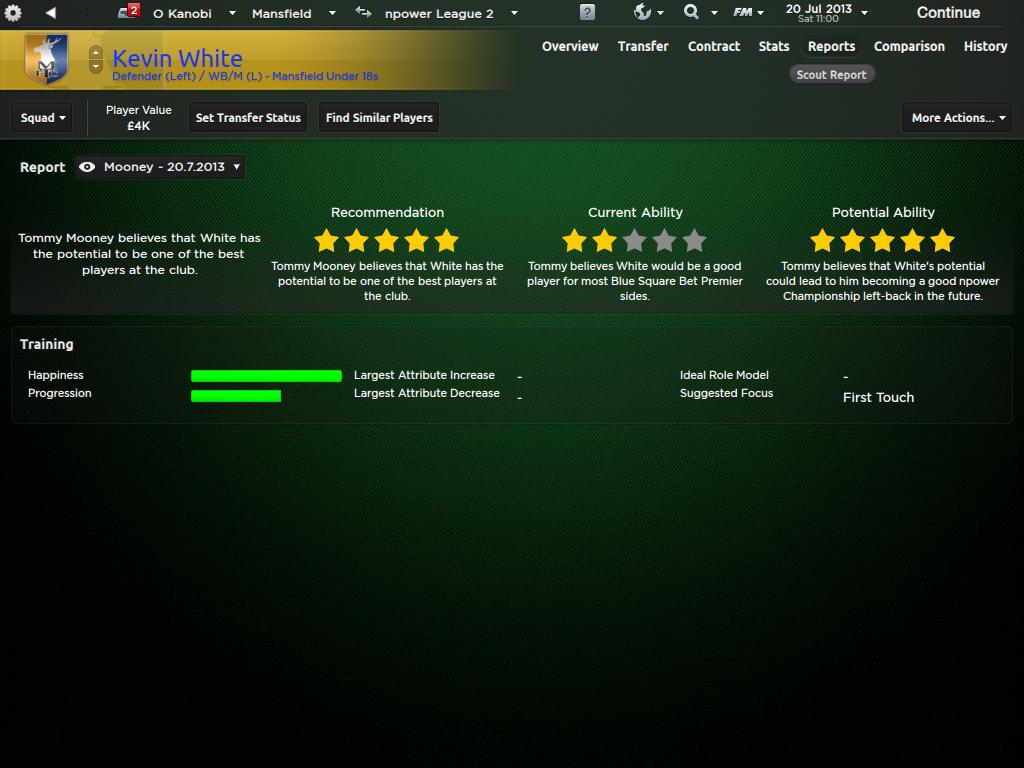 White will become a good championship player and at the minute is on loan at Gainsborough who play in the Blue square North.

Sorry that this update isn’t as detailed, I will be trying to write in more detail during the season.
Login to Quote

After 13 games of fixtures in league 2, Mansfield have been preforming surprisingly well. They are playing as if they have been relegated from league 1.
So here are the fixtures for the months of August and September- 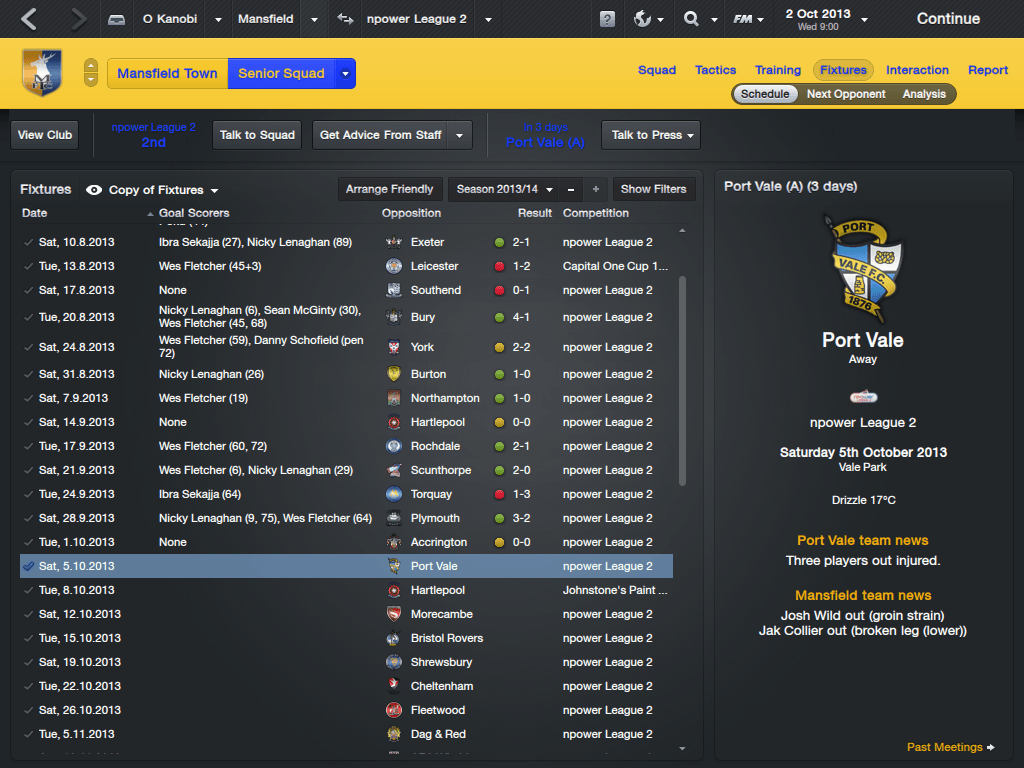 Between the 20th of August and the 21st of September Mansfield went on a seven game unbeaten run and were beaten by promotion candidates Torquay United in a 3-1 humiliation. You may think 3-1 isn’t humiliating but Mansfield only had 5 shots. To make matters worse Josh Wild, the next best goalkeeper, was injured in training the game before so “Golden Oldie” Alan Marriott took his place and then scored an own goal.
There was surprising victory against Bury, a team who were relegated from League 1 the previous season. Goals from Nicky Lenaghan, Sean Ginty and Wes Fletcher secured this victory. During this game we had 7 shots and 5 were on target.
So after these fixtures this is where Mansfield were left in the table- 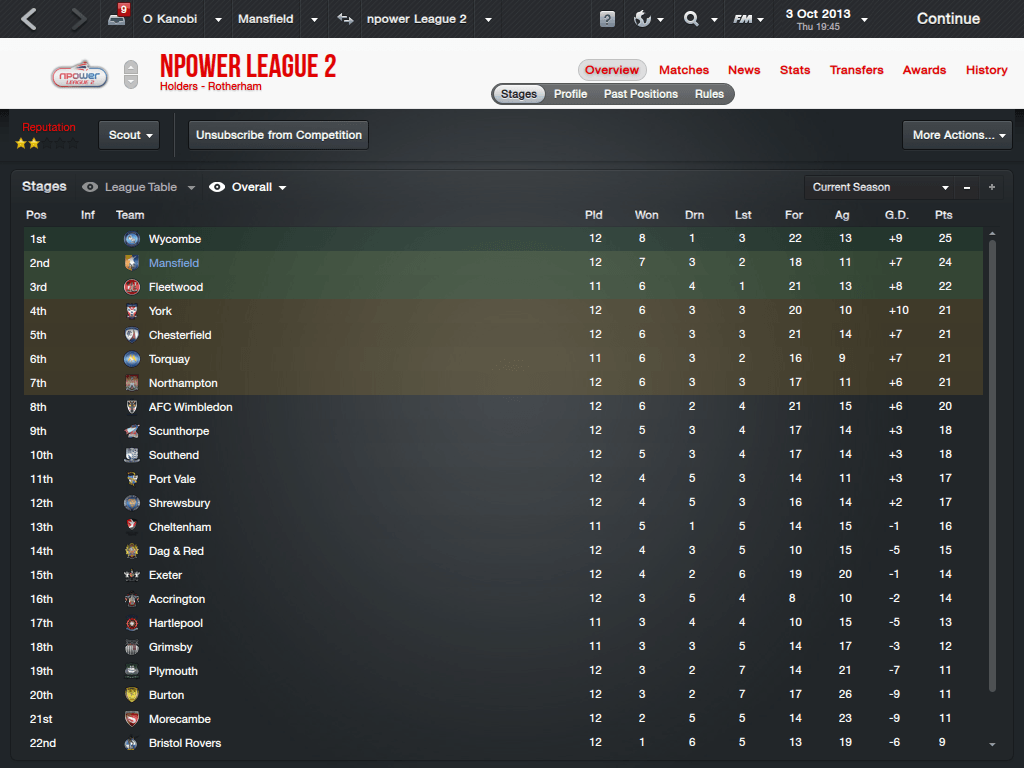 Yes you are seeing that correctly, Mansfield are sitting in 2nd place, 1 point behind Wycombe but Fleetwood have a game in hand and can move up to pole position if they win that game.
So finally a new feature I’m am going to include, Regen of the month. This will be decided by the average rating, the amount of goals scored, the amount of assists; there pass ratio and clean sheets. At the minute I will only be doing one position as there isn’t many regens in the first team.
So the regen of the month(s) is…………………. Nicky Lenaghan!!!!!!!! 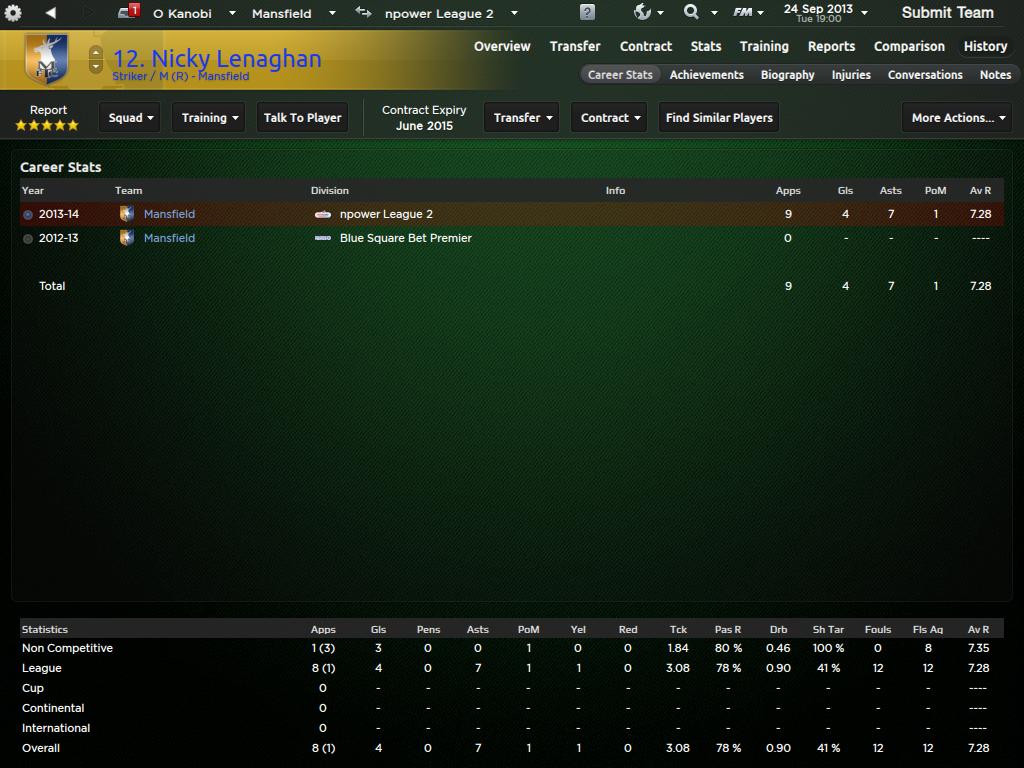 He has been superb creating 7 goals and scoring 6 himself. He has an average rating of 7.22 but surprisingly hasn’t sparked any interest from major clubs.
That’s it for now, comments are greatly appreciated.
Login to Quote

No1VillaFan
8 years
I think your doing great too keep it up!
Login to Quote

Ziechael
8 years
The force is strong with these ones, i just hope the evil empire (manchester united) don't swoop on all your players... or target mansfield with their death star (wayne rooney's head). Good luck, i'm looking forward to seeing how this pans out.
Login to Quote

You are reading "Mansfield youth challenge".