@The Madridista - Thanks man!

After Hannover's recent domination of Wolfsburg Beno Zeeb was offered contract from the Hannover board. The contract is expected to be over 22K a week on a four year deal. Zeeb has chosen to delay the deal until the end of the season to consider his options. Many fans respect his choice to delay it but certainly wish him to stay. The contract came in after the Wolfsburg game due to the qualification for Champions League through winning the fixture. Along with this Sobiech won the player of the week award and several other players from Die Roten were named in the team of the week.

k1rups
9 years
Just caught up some great updates and an awesome update style! Hannover are flying!
1
Login to Quote 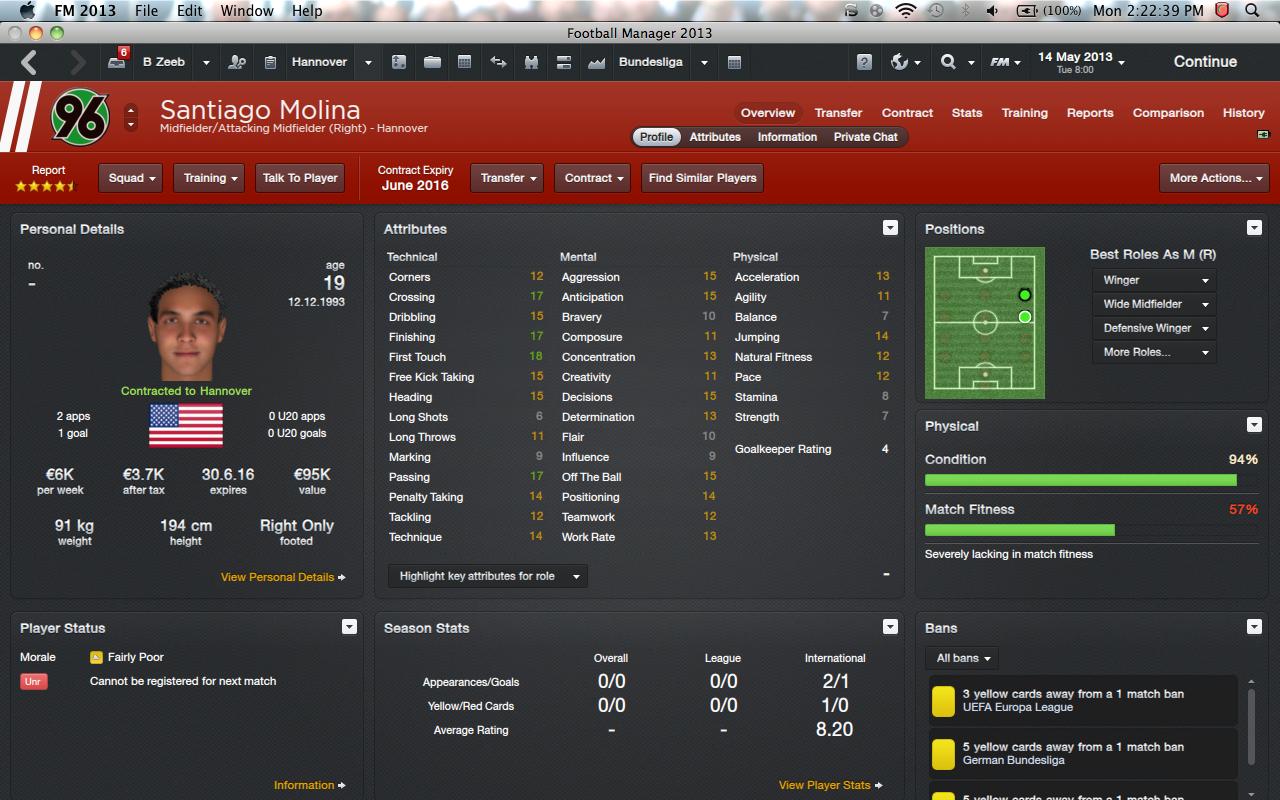 It has been a busy few weeks in the Bundesliga as teams have the first look through the squads to take a thoughtful approach to who will need replacing. Well Hannover have already got started with the signing of young American right winger Santiago Molina born in Lake Forest California. Zeeb openly stated during his unveiling that he had been looking at the youngster for sometime before signing him. Santiago has expressed his delight at signing with Die Roten calling it "a dream come true". At the age of 19 has already had two international caps for the US and will potentially be in for more.


What a way to end the season for Hannover. A young signing, these two results and this:

Rablador
9 years
Fantastic results mate, good to see you're doing well with Hannover, didn't quite work out for me!

They have a pretty good squad. Which is what surprised me when I took over. I guess the success comes maybe through luck. Most likely different tactics though, some fit better than others
Login to Quote

In the Barclays Premier League, Manchester United enjoyed first place with 83 points. While their neighbours City took 2nd. Followed by Tottenham in 3rd, Chelsea in 4th, Arsenal 5th and Newcastle 6th who were tightly marked by Norwich missing 6th by four points. Relegated were: Reading, Wigan and Southampton; replaced by Watford, Cardiff and Blackpool.

http://www.pronostics.fr/wp-content/uploads/2009/05/logo-ligue-12.jpg
In the Ligue 1, Paris Saint-Germaine narrowly edged out Lyon for 1st place breaking the league record for most points (88). Lyon took second while Bordeaux took 3rd, followed by Marseille. Montpellier and Lorient took 5th and 6th respectively. Relegated were: Ajaccio, Sochaux-Montbe and Stade Brestois. Taking their places are: Monaco, Lavallois and Arles-Avignon.

http://www.eventos100.com/ligaBBVA/images/logo-liga-bbva2.jpg
In the Liga BBVA, Real Madrid took first while Barcelona followed in second. Barcelona were stalked closely by Sevilla and Getafe who finished 3rd and 4th. After them came surpriser Granada who were expected to be 17th at the start of the season. Atletico Madrid had a disappointing season finishing 6th. Relegated were: Valladolid, Celta and Deportivo; replaced by: Murcia, so far (will be edited later on)

In the Serie A, Napoli took home the title for the second time in their history. Followed by Juventus, Roma and AC Milan going 2nd, 3rd and 4th. Genoa took 5th while Bologna became another surprise package taking 6th. Relegated were: Pescara, Torino and Siena; replacing them are: Spezia, Brescia and Juve Stabia.

http://www.vavel.com/files/bundesliga_logo_649212961.jpg
Promoted to the Bundesliga are St.Pauli, Kaiserslauten, Hertha BSC. Hertha knocking Mainz out of the league to take their spot.
_

Hannover have announced that their pre-season will be held in Poland and will start the 14th of July. Giving the squad several weeks to recuperate. Bundesliga awards will be announced soon!
Login to Quote

and good work on the third place finish. Good to see my Blackpool in the EPL again

Karim Haggui was the standout star for Hannover this year. As he managed to win Bundesliga player of the year and fans player of the year. Haggui despite being a central midfielder found himself bagging no less than twelve goals in all competitions last season. An extremity for an defender in a season. On the other side of the pitch Mame Diouf brought the most goals to the table. Especially at the end of the season. Diouf finished the season with 26 goals in all competitions. Additionally handing assists, with five players of the match. A great return after a serious injury before the season started. 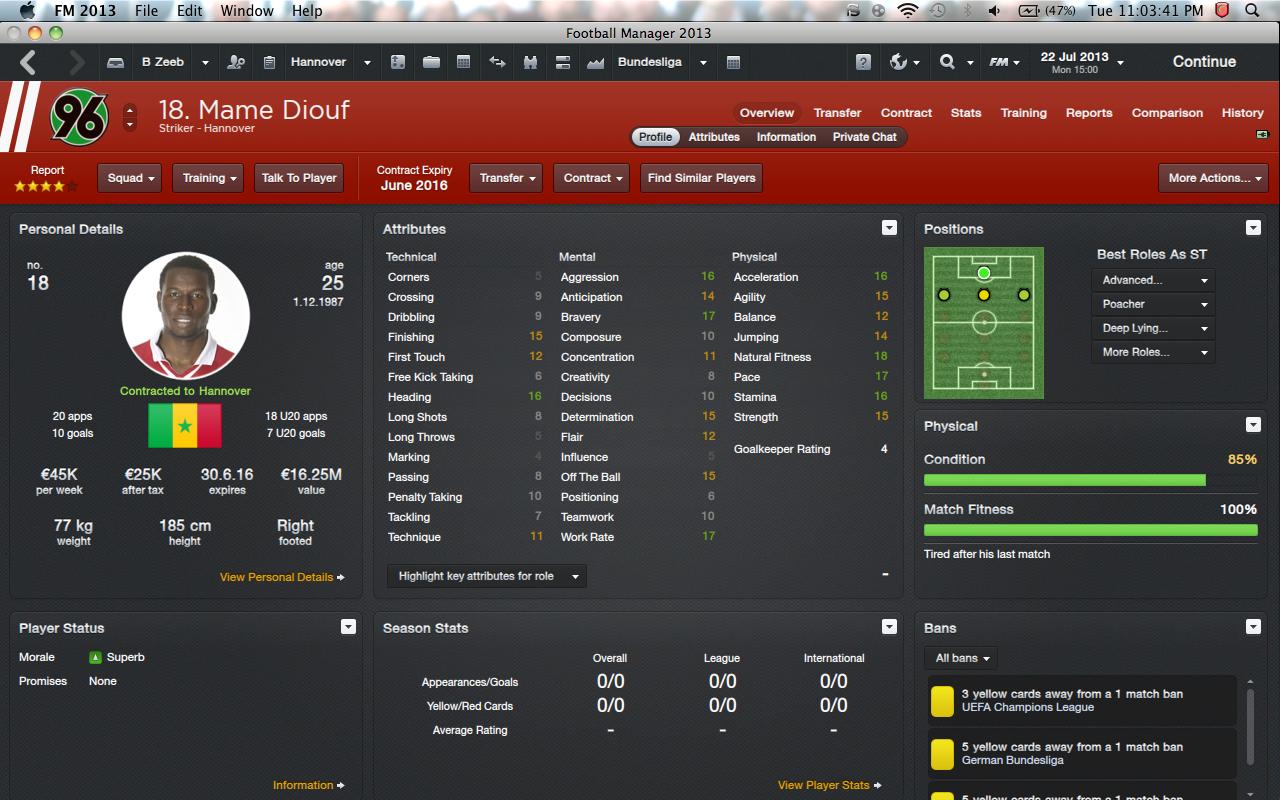 Zeeb has shown his intent of continuing his managerial career at the AWD-Arena after signing a 30,000 Euro's a week contract with the German club. Zeeb openly stated that he loves the club he is at right now and wishes to grow with them. Martin Kind, Hannover chairman has expressed his delight in Zeeb signing a new contract saying "Zeeb has all the credentials to become a club legend. Certainly after last seasons positioning this seems only simple fact."

Zeeb has also made it aware that he wants to improve on Hannover's positioning domestically and internationally. In other terms Zeeb could be asking for the squad to mount a serious title challenge next season. A big ask for a club with less than half the assets Bayern does. Yet it has to be considered that will and ambition trumps money any day and that Hannover certainly showed a lot of those last season. Rallying the troops maybe but as it seems Zeeb is already looking forward to next season. Look out Bundesliga here come Die Roten.
Login to Quote

Hannover players on the way out

The opening day of the transfer window marked the departure of three players. Christian Pander, Adrian Nikci and Sofian Chahed. Both Pander and Nikci left on a combined of 3m to Dusseldorf this morning. Nikci's lack of first team football led reporters to believe that this was not only Zeeb's choice but the players too. The reason for Pander leaving is thought to be on his injury proneness which hindered much of his career in the 2012/13 season.

Chahed left Hannover for Furth. In pursuit of first team football. Hannover didn't get any income out of the transfer. They did manage to clear a good portion of the wage budget in watching Chahed go.

It is also rumoured that loanee of last year Pocognoli and even Sergio Pinto could be on the way out of the AWD-Arena. Pinto being the most surprising as he played an instrumental part in Hannovers push for Champions League placing this upcoming season.
Login to Quote

Moez Ben Chrifia has joined Hannover from APOEL on a fee expected to be worth around 1.7 million Euros. Chrifia has joined Hannover due to veteran Markus Miller's contract expiring. This has come as a surprise as many thought Arsenal's Vito Mannone would be heading to Die Roten. Chrifia has stated his happiness in the transfer and is looking forward to working with manager Beno Zeeb. To find time on the pitch Moez will have to put in fine display's to compete with Zieler, who was nominated second best goalkeeper in the Bundesliga last season. 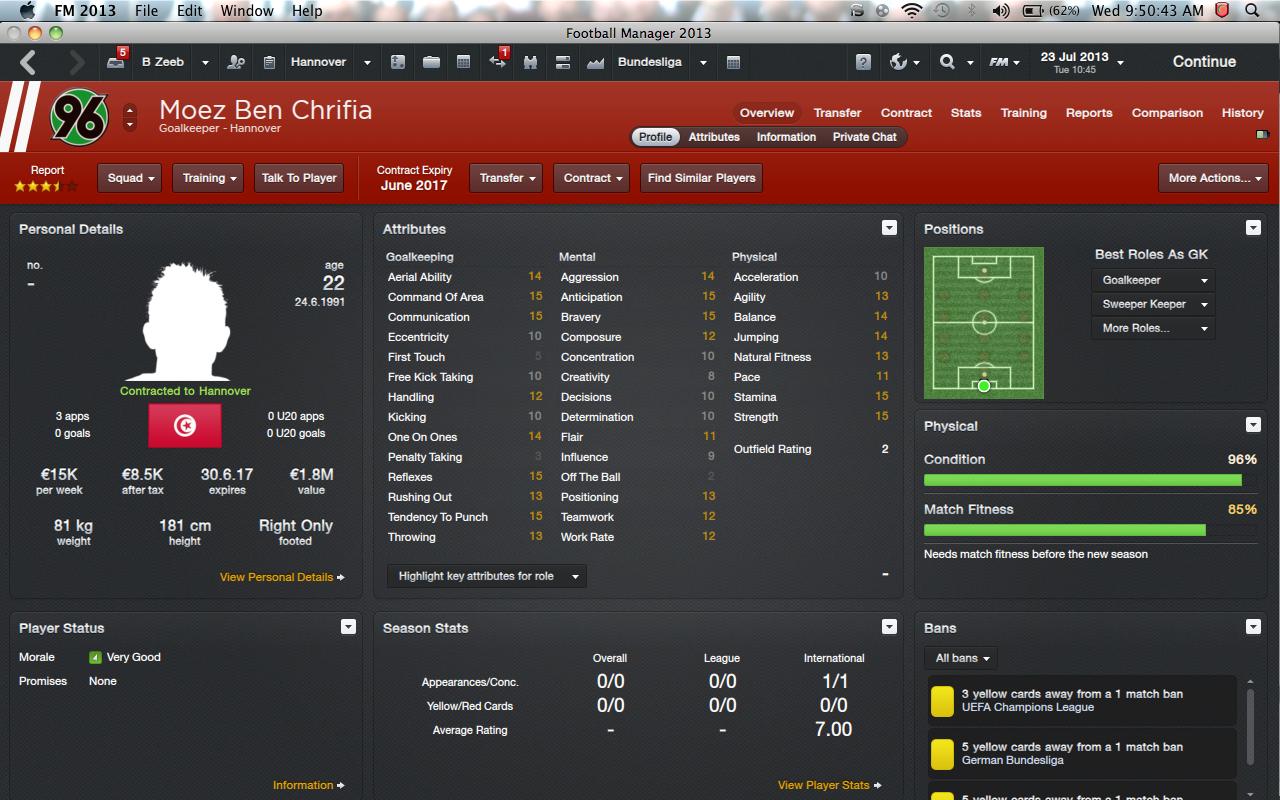 On other transfer news Hannover look to find a replacement for Djourou as he heads back to Arsenal. Hannover did inquire about his availability but the price was too high for there liking. There is also rumoured a siting of a Barclays Premier League midfielder at the club recently and the announcement for the player is expected to come in the coming days.
Login to Quote


July 8th 2013 marked a day to remember for Hannover fans as the club managed to complete four deals. Two in, two out. Padova completed the signing of Pocognoli for one million Euro's. Padova look to improve their ranks as they search for a Serie A side.

Fans were disappointed as Hannover let Sergio Pinto join rivals Stuttgart for 2.5 million Euro's. Understandably though that at his age the chances of him getting many appearances for Hannover other than off the bench, are slim. To replace Pinto, Hannover have bought Mohamed Diame from West Ham. The midfielder had a minimum fee release clause of 4m in which Hannover utilized to sign the player. His strength in the midfield takes up the role as a vital ball winning midfielder. 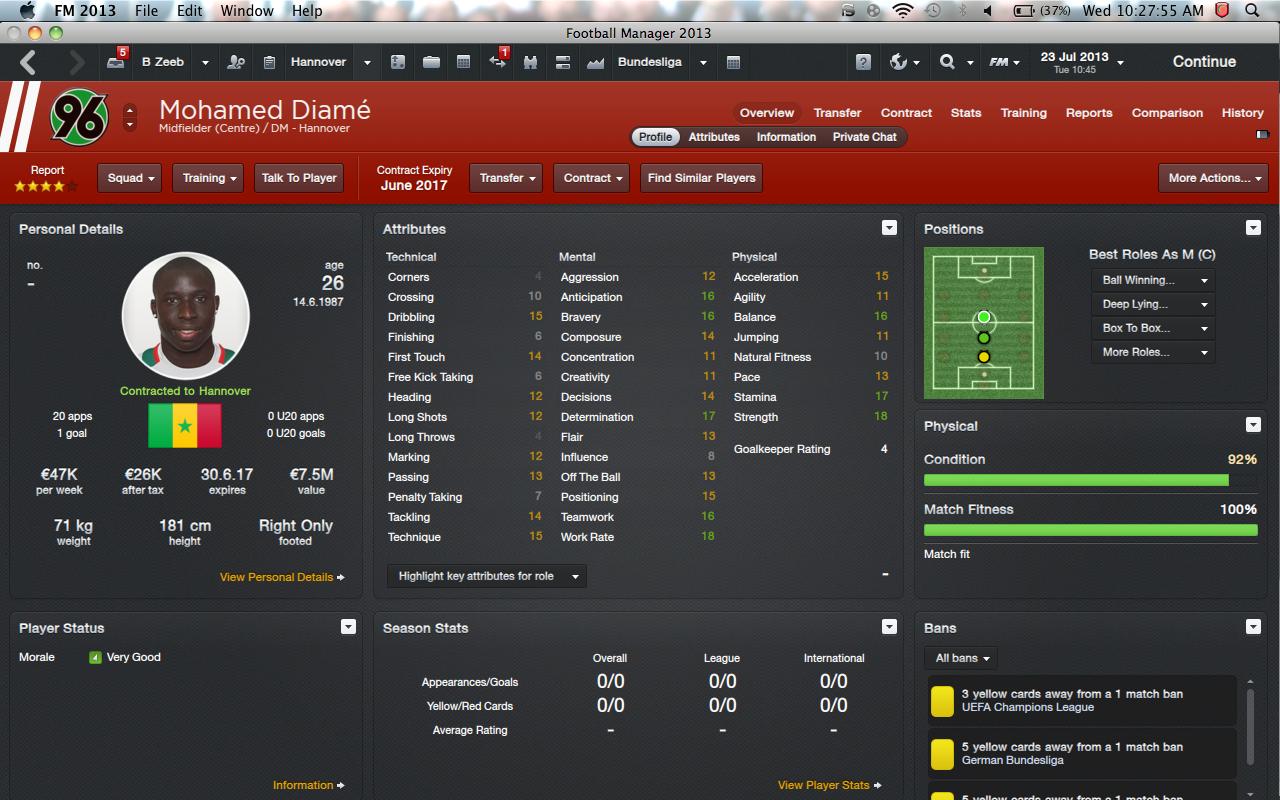 Another player into the club is that of a young defender from Chelsea. Dutch Jeffrey Bruma has joined Hannover on loan from Chelsea as a back up. This means that Dragovic or Felipe will take up a more vital role this year in the club but, which one will it be? 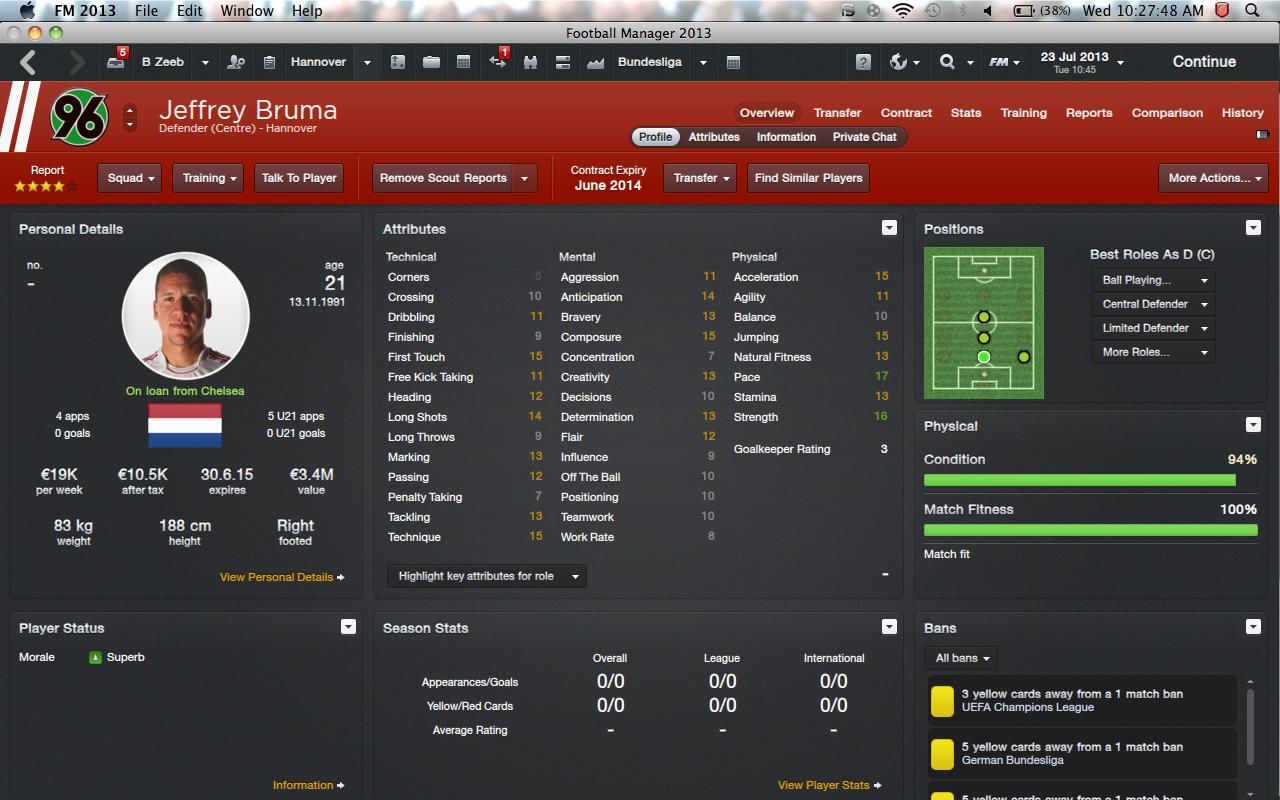