This team is incredible!
Login to Quote

This team is incredible!

September: Not the best 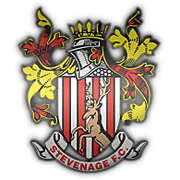 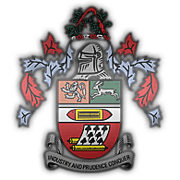 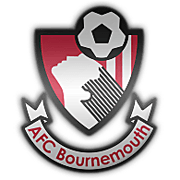 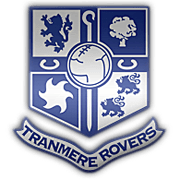 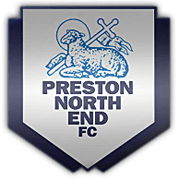 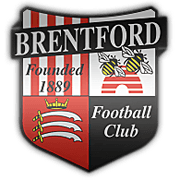 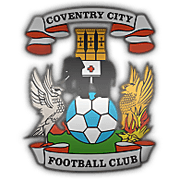 Rablador
9 years
The occasional slip up, but for your first season in League 1 you're still doing great!

RM: We are here today with the F.A. Cup tie of the round, European super giants Manchester United against recently promoted Accrington Stanley. Here are the line-ups for the game today: 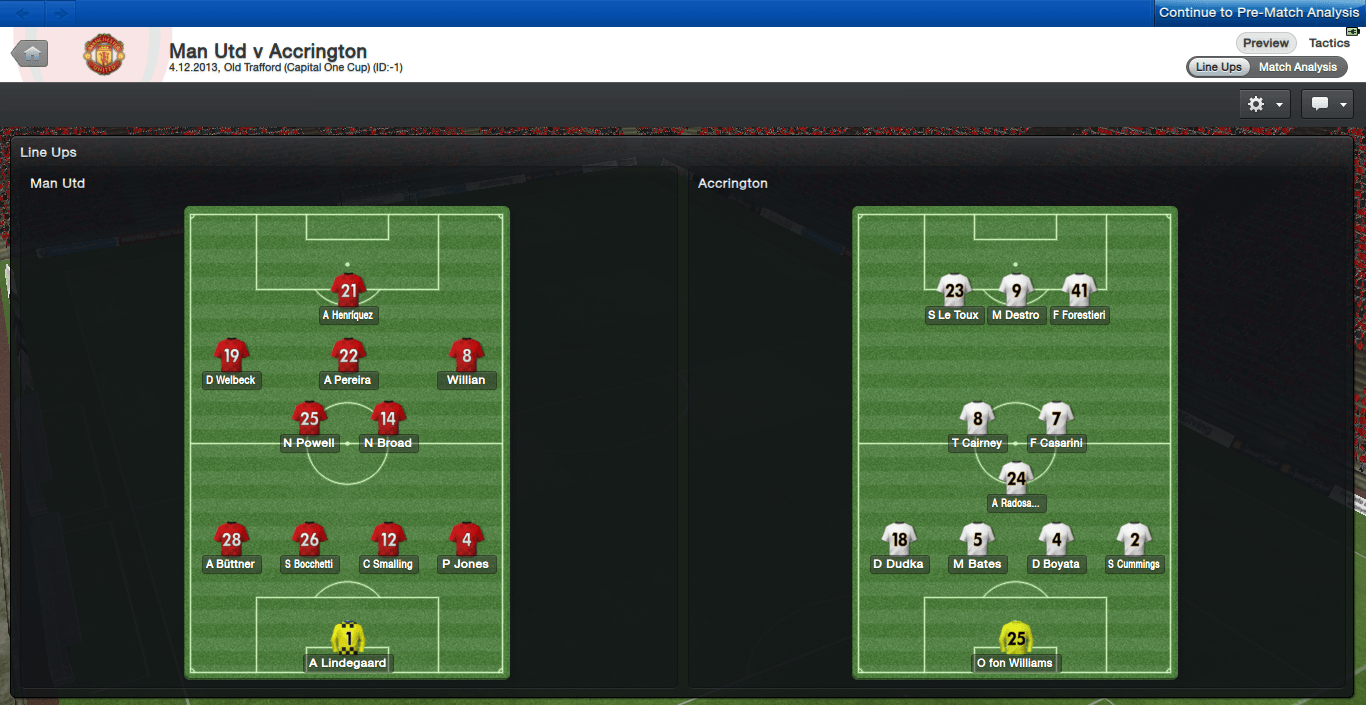 RM: Man Utd have put a very strong team out today with their main threat being Right-winger Willian. For Accrington JJ Lister's strongest player is undoubtedly Mattia Destro from Serie A side Genoa for a bargain free transfer, although he spent all last season on loan at AS Roma. We now head over to our commentators for the game today, Louis Otrowski and Mike Hunt.

MH: Hahaha, Willian?! You must be f**king joking?!

MH: Oh, shit. Anyway, hello and welcome to Old Trafford a.k.a the Theatre of Dreams. I am Mike Hunt and beside me is Louis Otrowski, how are you feeling about this game today, Louis?

MH: Well, you're a sociable bastard aren't you?

LO: ... Anyway, the referee has blown the whistle and the game is under way!

12 mins: LO: Accrington have a free-kick in a dangerous area, Tom Cairney will take it. He looks as if he's going to whip it in... He has... Le Toux!!! No, Bocchetti gets a nick on it and it's in!!! Accrington lead through a Salvatore Bocchetti own goal! 1-0 to the nPower League 1 side! 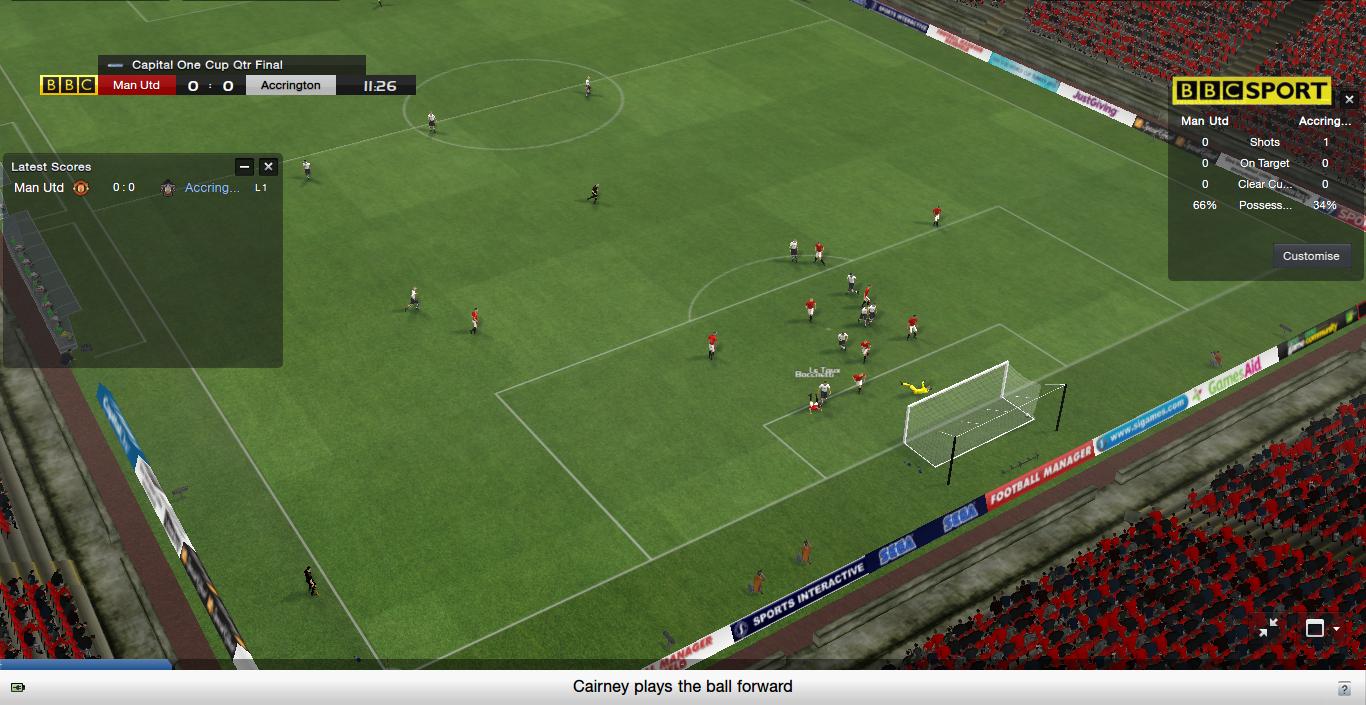 24 mins LO: Bocchetti tackles... It's gone to Welbeck, Welbeck finds Pereira in the middle... Pereira gives it to Henriquez... Henriquez one on one with fon Williams!!! What a miss! You don't get many chances like that!

MH: YOU SHIT BASTARD! FINISH IT!

26 mins LO: Tom Cairney in the exact position as where he crossed it in to get the first goal, he has the free-kick... Broad misses it! LE TOUX!!!!!! GOOOOOOOOOOOOOOOOOOALLLLLLLL!!!!!!!!!!! Bocchetti missed the tackle completely!!! 2-0 Accrington Stanley!

MH: Well, this is just embarassing. Bocchetti, you're shit! 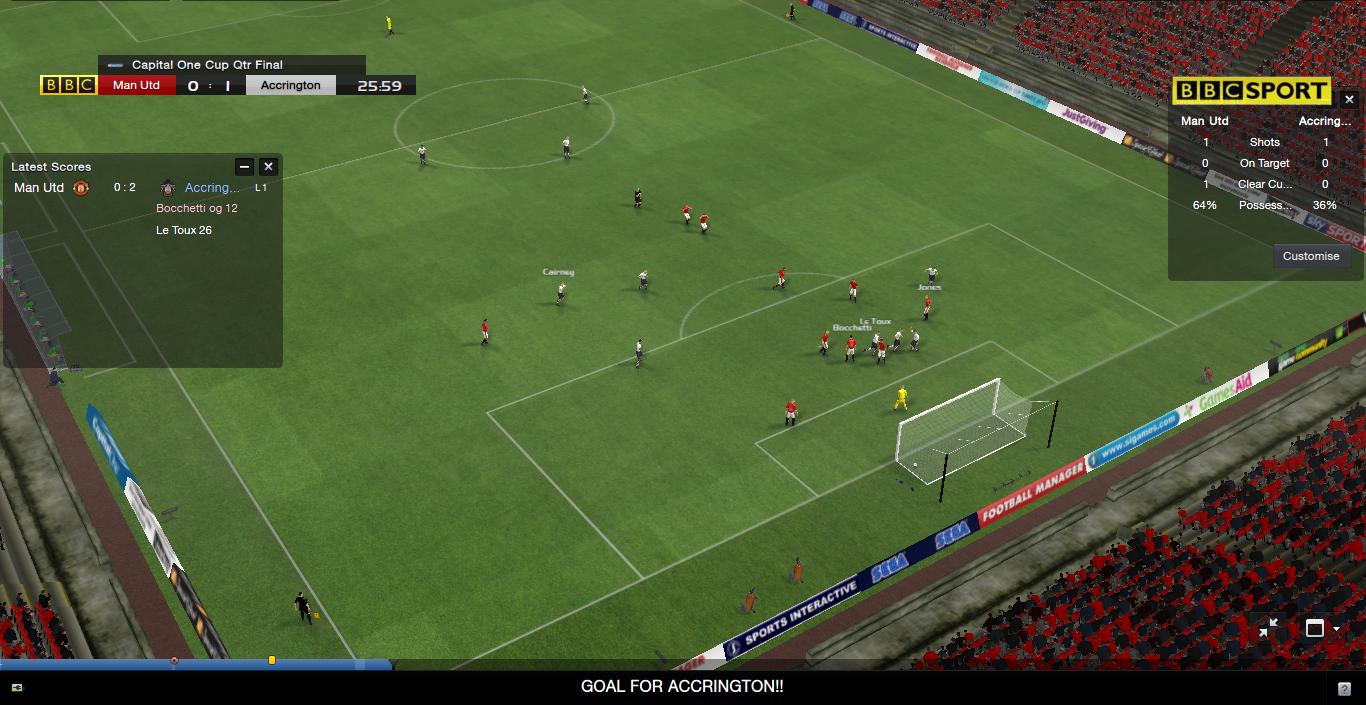 43 mins LO: fon Williams gives it short to Kisnorbo, Kisnorbo gives it straight to an advancing Phil Jones, here's Willian, gets to the byline... Whips a ball in... HENRIQUEZ!!! HE'S MISSED AGAIN!

RM: So the League 1 side go in 2-0 ahead against the Premier League leaders in the Quarter Final of the Capital One Cup. What a poor performance from Henriquez! He's missed two sitters so far! Anyway back to you Mike.

MH: HANG ON! I'm in the middle of my sandwich here!

MH: Jesus, I thought it was just Man United that missed sitters?

69 mins LO: Here's Dudka, van Persie fouls him, free kick and a yellow for the Dutchman. Dudka and Cairney play a 1/2, Casarini finds Le Toux. Tackled by Jones, Pereira plays it short to Kagawa, back to Pereira, Vidic, Pereira. Wonderful ball over the top to Pereira by Kagawa! Pereira at the byline...

LO: GOAAAAAAAL Man Utd back in it! Goal from Henriquez!

LO: Radosavljcvic, back to Cummings... FULL TIME AT OLD TRAFFORD!!! ACCRINGTON ARE THROUGH TO THE SEMI-FINALS OF THE CAPITAL ONE CUP!

MH: Gotta say they deserved it, Fergie'll be going mad!

LO: That's all from us today, thank you.

Rablador
9 years
I think Emma has a rival for commentator of the year! Incredible win by the way

k1rups
9 years
Some great results there mate looks like this team is already capable of battling with the Premier League big boys!
Login to Quote


What a great two months! A 2-1 win against Man Utd and then a 7-0 win against Tottenham Hotspur while I accidentally went on holiday (My assistant is the best :D) and we find ourselves in a very very good 3rd place with 2 games in hand against 2nd placed Leeds.

It was a much less busier transfer window, signing 3 new players, Charlie Mulgrew from Celtic, Michael Collins from Bohemians and Armend Dallku from Vorskla

*Sorry for the short update*
Login to Quote 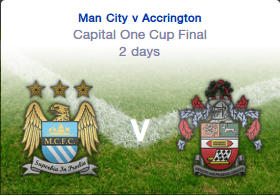 BBC Man: And now we join Mike Hunt, Jamie Tillsbury and Alex Heardman at Wembley for the Capital One Cup.

MH: So Manchester City are 1-6 favourites today but are without Carlos Tevez who is suspended and Yaya Touré and David Silva who are out with injuries. But arguably Accrington's best Center-back Dedryck Boyata is ineligible as he is loaned to Accrington from Manchester City. What are your thoughts gentlemen?

JT: Well I think the biggest miss today is Boyata as he has been the rock of Stanley's back four this season.

MH: Okay... Now lets take a look at the line-ups for today's match: 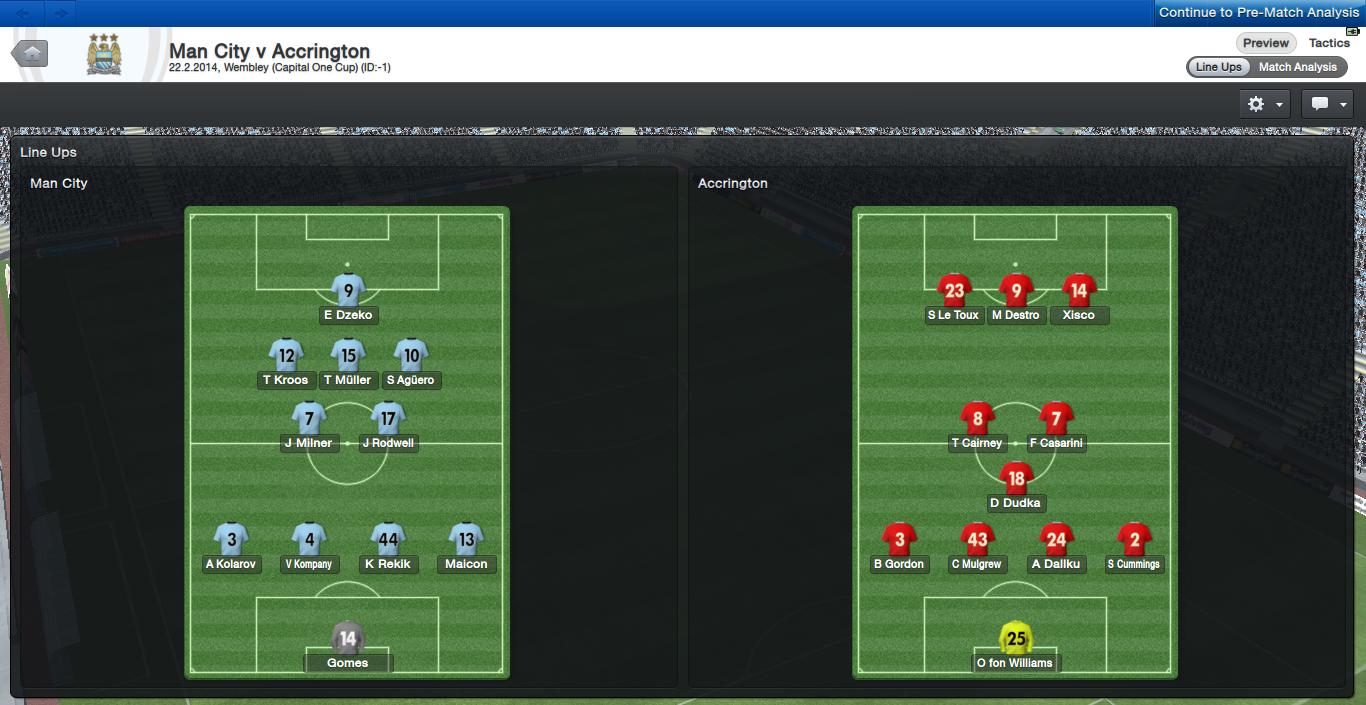 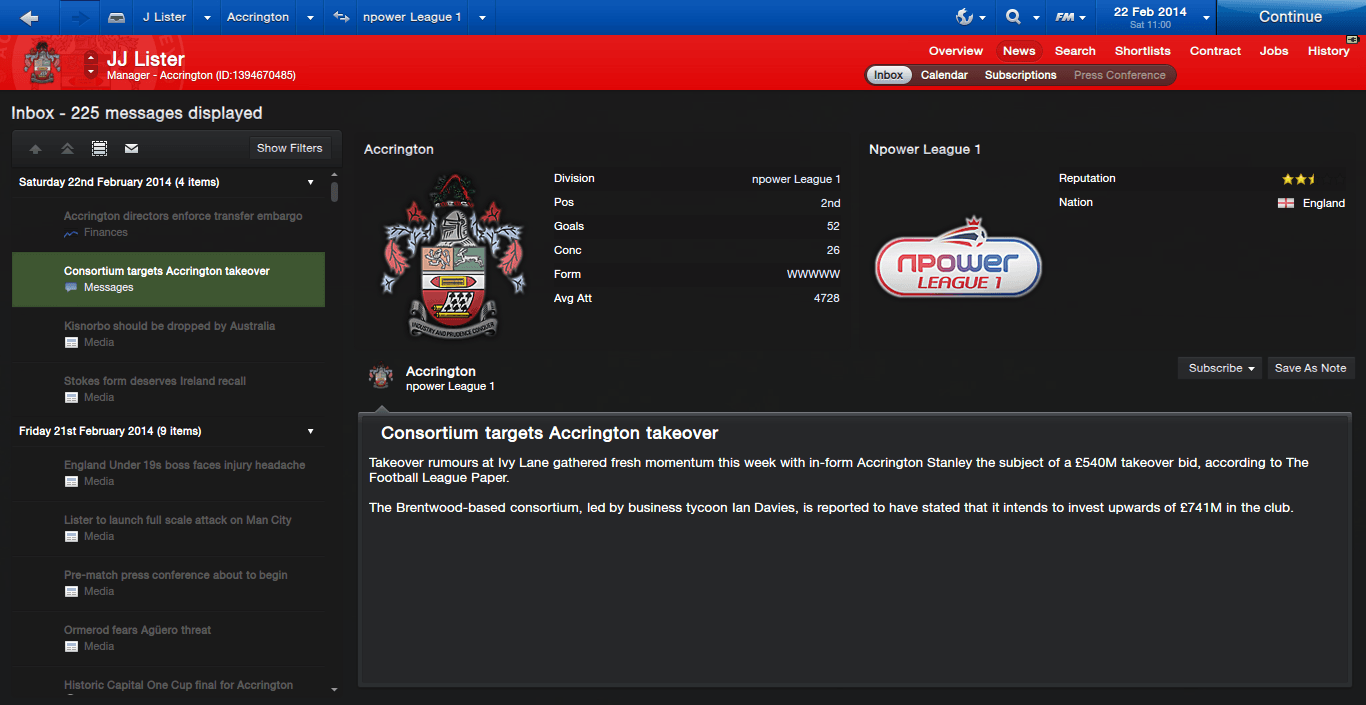 MH: Alex, that has nothing to do with the line-ups but if you haven't heard Accrington are subject to a take-over bid from billionaire Ian Davies. Anyway, here is Accrington Stanley manager JJ Lister walking onto the famous Wembley turf. He's been a great inspiration hasn't he Jamie?

JT: He has, he started from nowhere and somehow got Accrington promoted as champions and it looks as if he is getting back-to-back promotions as they are currently 2nd in League 1.

MH: Thank you Jamie, but it's time to head over to our commentary team, Joshua Bean and Louis Otrowski.

JB: Thank you Mike, the game has just kicked off, with Accrington first to take it, Xisco has played it to Le Toux and we're off!

3 mins LO: fon Williams with a free-kick inside his area, plays it a fair distance to Shaun Cummings, Kroos cuts out his pass and it's Muller, here's Rodwell back to Kompany. Kroos again, Rodwell, Muller, Kolarov is in! POST! It's the rebound surely!!! Saved by Owain fon Williams! It's a corner! Kroos to take, Mulgrew heads it away, Kroos... Mulgrew tackles for another corner... Xisco's headed it towards his own goal for some reason and Ben Gordon clears. It's Kroos... Pass intercepted by Gordon, gives it to Xisco, Mattia Destro now, good tackle from Kolarov and Kompany gives it back to Gomes.

6 mins JB: Here's Tom Cairney with a free-kick near the half-way line... He looks as if he's going to cross it in... He has... IT'S LE TOUX!!!!! GOAAAAAAAAAAAAAL!!!!!!! LE TOUX PUTS ACCRINGTON STANLEY AHEAD AT WEMBLEY AGAINST MANCHESTER CITY!!!! IT'S THE STUFF OF DREAMS FOR ACCRINGTON FANS!!!! 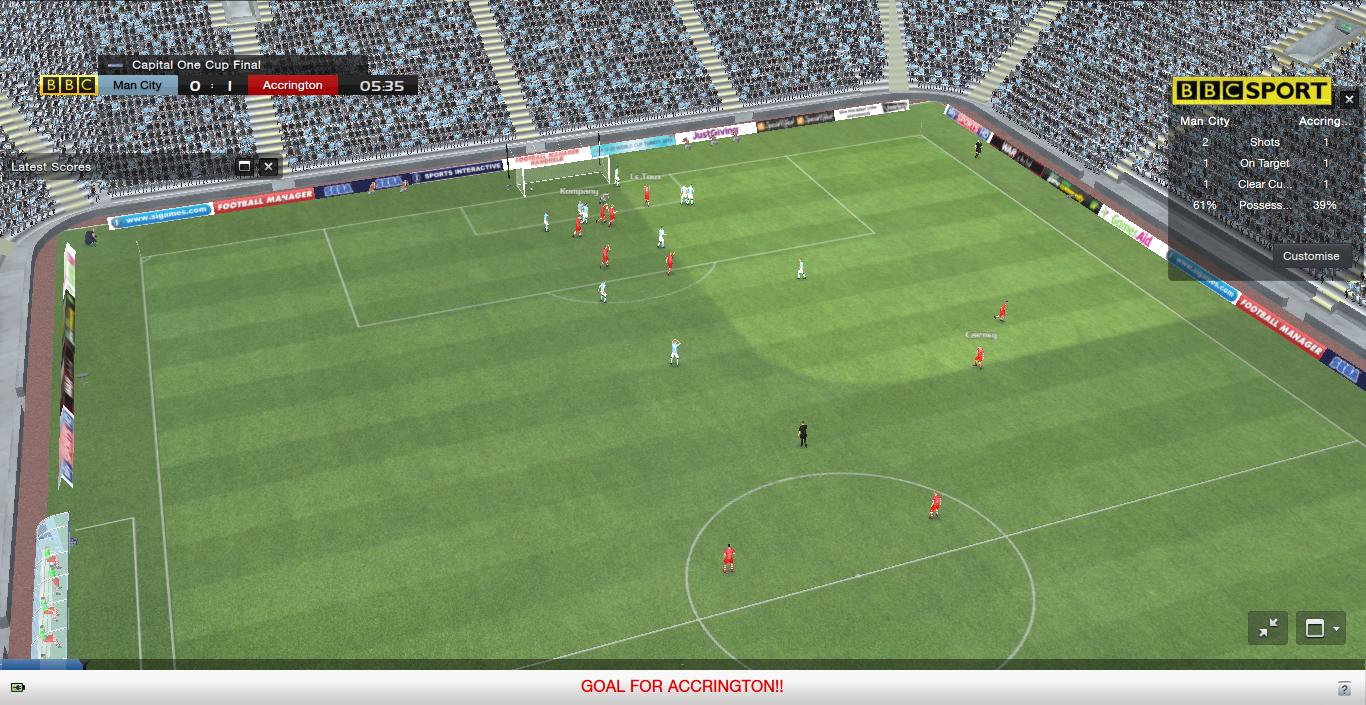 33 mins LO: Gomes with the goal kick, short to Rekik, Kompany plays it long towards Muller, Muller with a bad first touch and Mulgrew heads it back into fon Williams' hands, thrown out to Gordon back to Mulgrew, here's Dudka, hits it long, Maicon heads it away Cairney gives it to Le Toux, tries a lob over to Xisco, Kompany heads it away, Dudka heads it forward, Destro with a good first touch, finds Cummings who is making an excellent run down the right, Casarini inside the box now, Kolarov tackles and it's straight to Xisco!!! 2-0 TO ACCRINGTON STANLEY!!! XISCO!!! THIS SHOWS MONEY CAN'T BUY EVERYTHING! 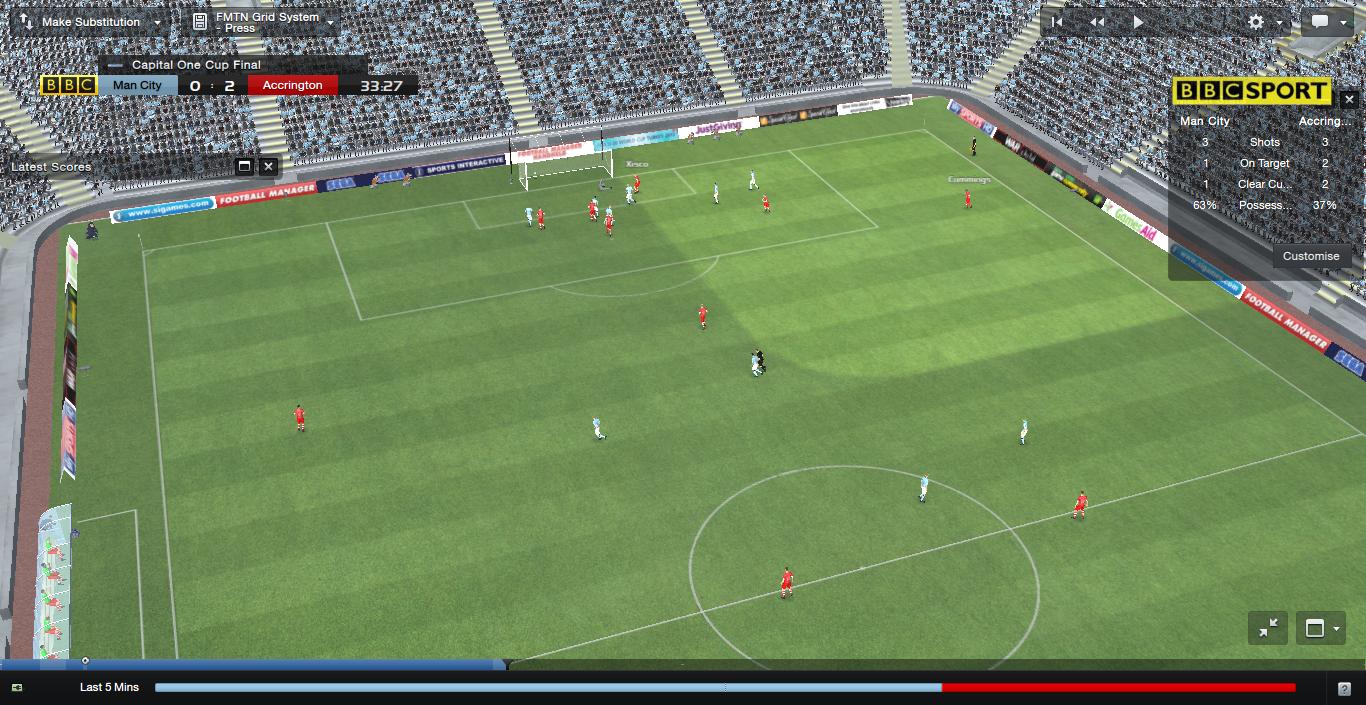 36 mins JB: Here's Maicon with a throw in Accrington's half, Milner, Aguero back to Rodwell, Kompany, Milner, Maicon almost gives the ball away but it's with Rodwell, Milner now, here's Rekik now it's Kroos, Man City playing it forward now, Milner to Dzeko, Aguero hits the post! And it's away by Dudka! Rodwell again and that was the worst shot I have ever seen by Jack Rodwell...

45 mins LO: Cummings throws it to Xisco, back to Cummings, Dudka... Kolarov cuts the pass out, Rodwell plays it high to Dzeko who nods it down to Aguero, Dallku with a clean tackle, Rodwell has found Dzeko's run!!! fon WIlliams is on fire today! 3rd one-on-one saved by him today! It's a Man City throw-in now.

LO: Aguero will kick-off the 2nd half for Manchester City.

53 mins JB: fon Williams with the goal kick, plays it to Cummings, boots it long and Rekik heads it into Gomes' hands, Gomes plays it long to Kolarov, Muller, Kroos, Milner, Muller, tackled by Dallku and it's broken for Dzeko! HITS THE POST YET AGAIN!

61 mins LO: Cummings with the throw deep in his own half, Dudka plays it back to Shaun Cummings, bad mistake by Cummings and it's Maicon on the edge of the box here, finds Dzeko at the far post! IT'S IN! MAN CITY HAVE GOT ONE BACK! Wait, no! fon Williams has magnificently stopped it! That has to be the save of the season right there from Owain fon Williams who deserves the man of the match today!

65 mins JB: Cummings with a throw in, Xisco gives it back, it's Dudka, Casarini, pass blocked by Nastasic, it's Kolarov now, Muller, Dzeko to Kolarov, Kroos to Dzeko. Cummings fouls Dzeko and he's already on a yellow card! Mark Clattenburg calls him over... This doesn't look good... It's a second yellow for Cummings! Accrington down to ten men!

Sub: Lee Peltier will come on for Xisco

74 mins LO: fon Williams with a free-kick to Armend Dallku, here's Mulgrew, finds Le Toux, Tom Cairney sprints with the ball, back to Ben Gordon, Dudka's pass is intercepted, it's deflected to Mulgrew who gives it to Dudka again, Casarini now, pass cut out by Rekik and hoofed upfield. fon Williams bowls it out to Lee Peltier, Dudka plays it to Le Toux, over everyone's head to Destro, superb ball, and it's Mattia Destro inside the City penalty area... Puts a ball in! LE TOUX!!!!! LE TOUX HAS MADE IT 3-0 TO ACCRINGTON STANLEY!!! THEY SURELY CAN'T BE CAUGHT NOW! ACCRINGTON'S DREAMS HAVE COME TRUE!!! JJ LISTER IS GOING MAD ON THE TOUCHLINE! SUCH A TOUCHING MOMENT! 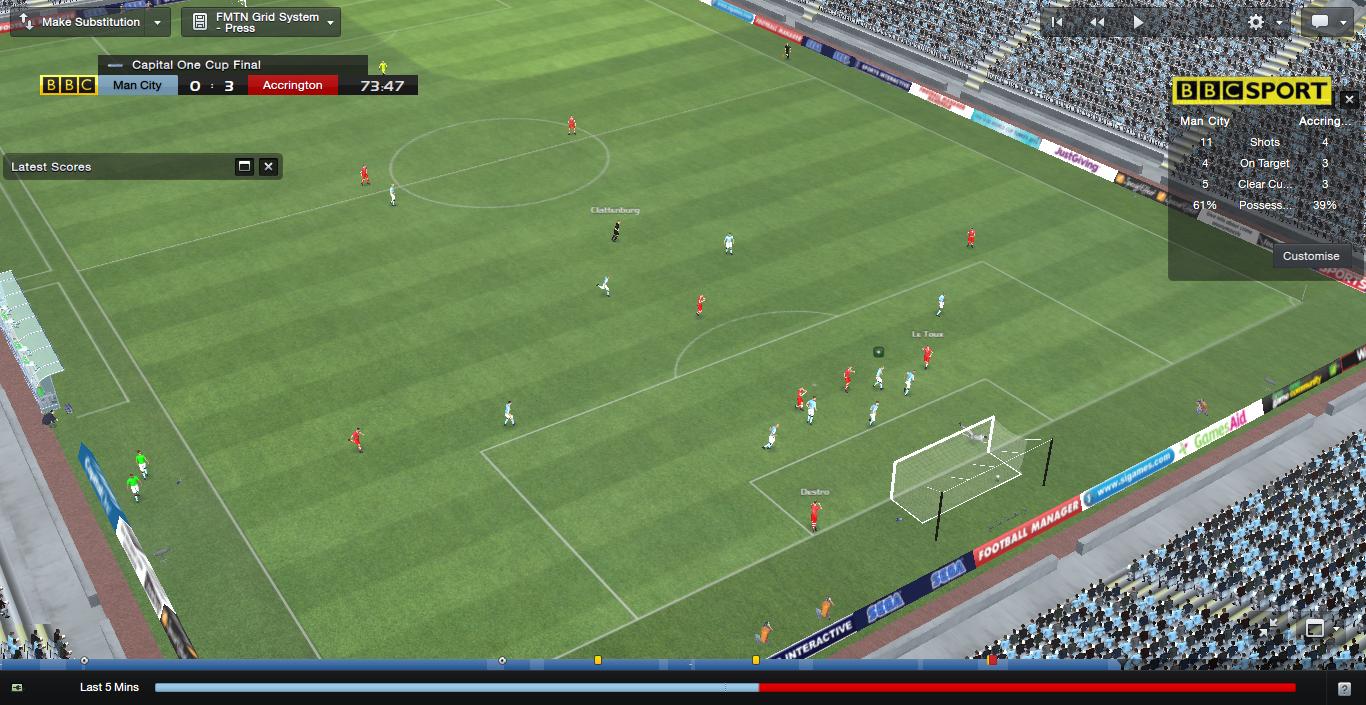 82 mins JB: Maicon has the throw, Gareth Barry, back to Maicon, Barry again, Muller, Maicon, Aguero has a shot! Saved by fon Williams, Dzeko is tackled! It's fallen to Kompany! 3-1! Is there a possible comeback? 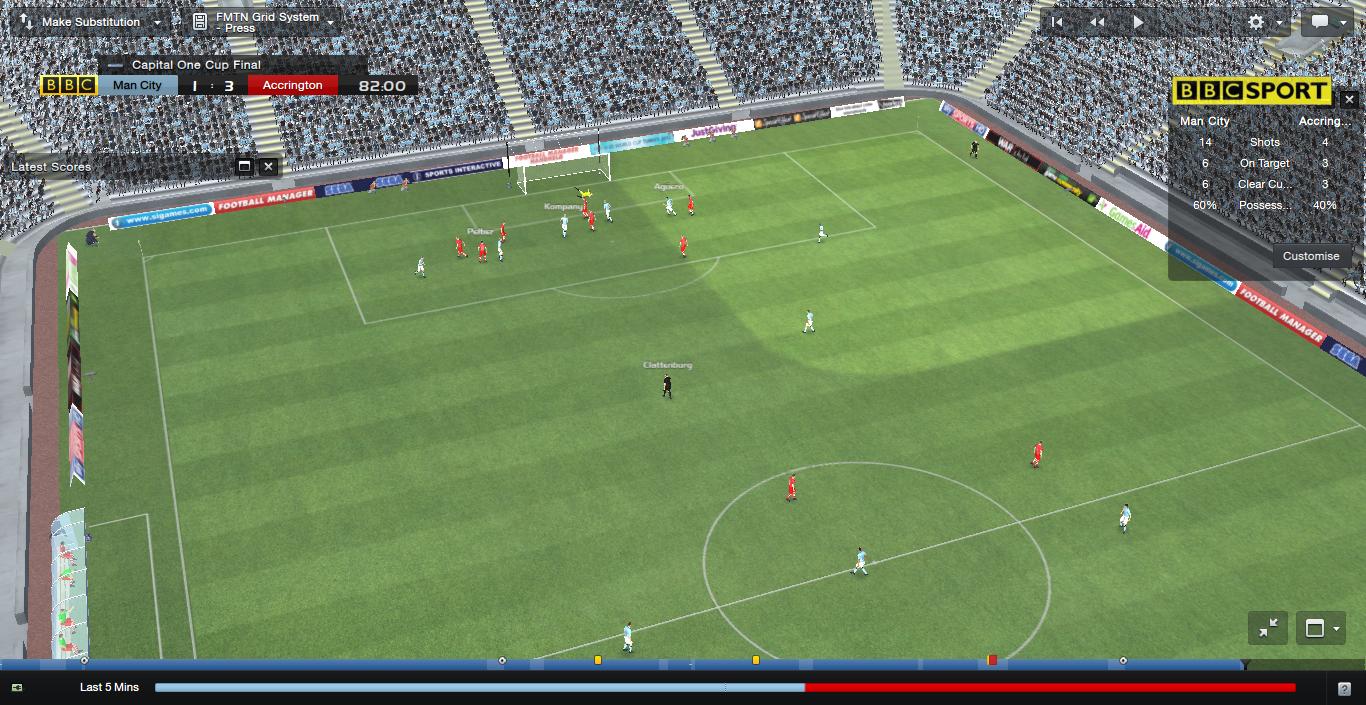 90+2 mins LO: Accrington have the League Cup in their hands, fon Williams boots it forward, Destro is fouled by Kolarov.

IT'S ALL OVER! ACCRINGTON HAVE WON THE CAPITAL ONE CUP AGAINST PREMIER LEAGUE LEADERS MANCHESTER CITY! 3-1 THE FINAL SCORE!

ACCRINGTON WIN THE CAPITAL ONE CUP
Login to Quote